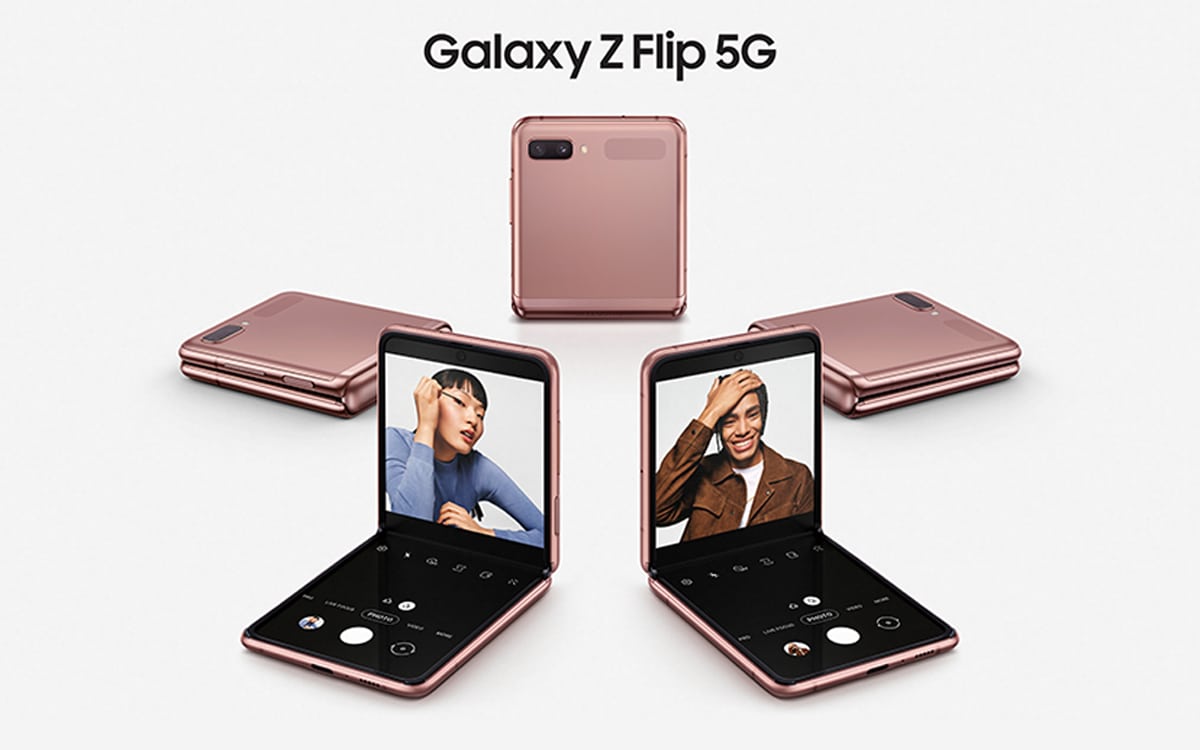 Samsung has just made the Galaxy Z Flip 5G official, its next 5G-capable foldable smartphone. This new version benefits from the power of the Snapdragon 865+ Soc, two new colors as well as an improved Flex mode for the occasion.

After a new leak revealed the full design of the Galaxy Z Flip 5G to us in early July, we expected the smartphone to be officially presented on August 5, 2020 alongside the Galaxy Note 20 and Fold 2 during the Samsung Unpacked. Finally, the manufacturer has taken the lead and made the Galaxy Z Flip 5G official this Wednesday, July 22 via a press release.

What about this Galaxy Z Flip 5G? As you can imagine, the main innovation comes from the integration of the latest processor signed Qualcomm, namely the powerful Snapdragon 865+. We then find under the hood 8 GB RAM, 256 GB internal memory and a battery identical to that of the Galaxy Z Flip 3300 mAh. The rear part is occupied by two sensors 12 MP wide-angle and ultra-wide-angle.

As said before, the other flagship novelty remains improved Flex Mode, this feature that allows rearrange the interface depending on the degree of bending of the smartphone. On the Galaxy Z Flip 5G, Flex Mode is now compatible with YouTube, allowing the user to ” watch your favorite YouTube channel hands-free ”.

” While looking at the top half of the screen, you can continue to browse, read descriptions and comment ” on the lower half of the slab. To celebrate this feature, Samsung is also offering 4 month subscription to YouTube Premium for the purchase of a Galaxy Z Flip 5G. As a reminder, this status allows you to benefit from YouTube ad-free.

Additionally, Flex Mode now allows you to quickly switch the preview window to Photo mode on the lower or upper screen. It is enough to make a double pressure on the slab. So, it is possible to use the folded smartphone (at 90 or 45 degrees for example) to take photos or videos in low angle.

Read also: Galaxy Fold 2 – the foldable smartphone will carry two batteries with a capacity of 4,365 mAh

The Galaxy Z Flip 5G retains the same dimensions (73.6 x 167.3 x 7.2 mm) and the same weight on the scale (183 gr) as its predecessor. Nevertheless, it marks its difference with two new colors available: Mystic Gray and Mystic Bronze. Note that this color will likely be available on the Galaxy Note 20 Ultra, according to the first official photo of the device. According to Samsung, the matte glass finish ” offers a pleasant grip while minimizing traces due to handling ”.

While we expected the Galaxy Z Flip 5G to release in September in limited quantities, Samsung has confirmed the availability of its foldable smartphone. from August 7th on its official e-store. We do not yet know if the device will also be available from the manufacturer’s partner resellers.

Regarding its price, Samsung has just communicated the prices for its foldable smartphone. The Galaxy Z Flip 5G will be available from € 1,559. As a reminder, the first Galaxy Z Flip was sold for € 1,509 when it was released, while the Galaxy Fold exceeded € 2,000 when it was launched in France in September 2019.