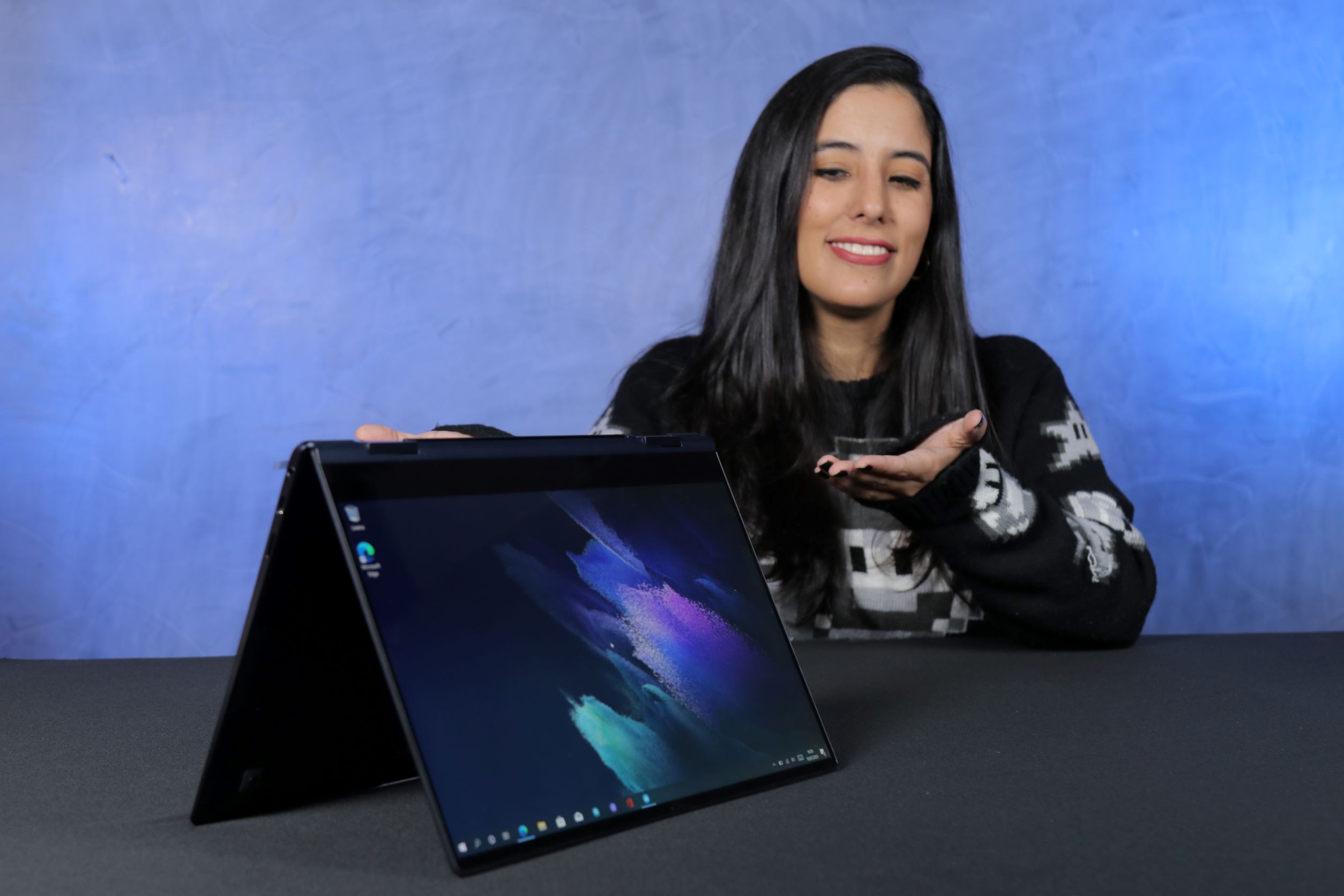 Internationally launched in April 2021, the Galaxy Book Pro 360 is officially arriving in Brazil in July. The premium 2-in-1 notebook brings great Samsung mobile device highlights to the PC, including a revamped S Pen and AMOLED screen with a very thin and light design. We had the opportunity to get our hands on the Galaxy Book Pro 360 and I’m going to share with you the main highlights here.

The Galaxy Book Pro 360 case has a more minimalist design, thin and already indicating that the device is manufactured in Brazil. In addition to the PC, here we also have the darling S Pen, a USB-C  cable – just like Samsung’s smartphones – and a 65-watt smack fast charger.

The model we are testing is dark blue and has a 13.3 inch screen, but there is also a larger 15.6 inch version in silver and bronze colors. This one is 11.5mm thick and weighs a little over 1kg.

The device has a very elegant and very sober design, with an aluminum body that helps to give this lightness and also a greater durability to the product, but leaves many fingerprints on the lid.

Despite the movement that allows you to turn the computer into a tablet or leave it resting on the table to watch a video, for example, it doesn’t feel fragile and doesn’t keep the hinge creaking.

Going back to the body of the device, on the right side we have a memory card slot, a USB-C port and a P2 connector for headphones and microphone. On the left side, plus a USB-C port and a Thunderbolt 4, which allow you to charge other devices when the PC is sleeping or off.

At the top of the screen, which is touch-sensitive, we have a microphone with intelligent noise cancellation, an ambient light sensor and a camera of just 720p. The on and off button also houses a fingerprint reader for easy unlocking. The keyboard with scissor mechanism and wide keys is very comfortable and backlit.

As you’d expect from a Samsung AMOLED, the display has vivid, bright colors, but the maximum resolution here is FullHD. Could be better here, huh, Sammy? Mainly because the idea is that the consumer uses the full Galaxy ecosystem, so it makes a difference when you move from the high-end QuadHD smartphone to the computer. The speakers with Dolby Atmos carry the signature of Samsung partner, AKG. 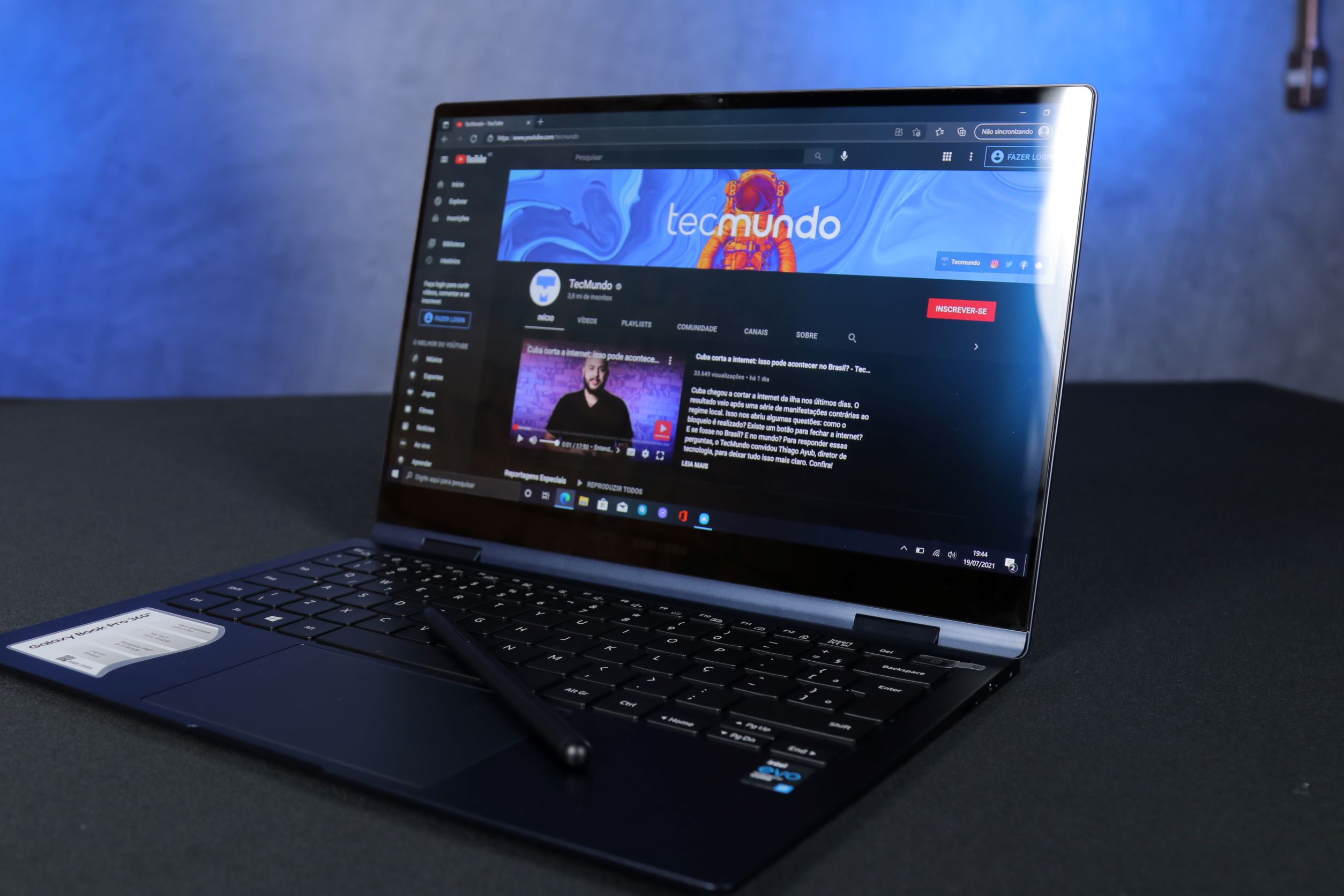 The Galaxy Book Pro 360 is part of the Evo platform project, an Intel partnership with notebook manufacturers to deliver improvements in features like battery life and connectivity in ultra-thin designs.

Under the hood, the processor is an 11th generation i7, 512GB SSD and 16GB of RAM (LPDDR4). As you already noticed by the connectors I mentioned, the internet connection here is wireless, supports 5G, Wi-Fi 6E and Bluetooth is 5.1. The battery has 63Wh and, so far, has shown promise, but we’ll find out more when we go deeper into the tests. The graphics card is integrated, an Intel Iris Xe.

The operating system is Windows 10 Home which also brings the Link with Windows, allowing you to use up to five applications simultaneously from your Android smartphone on your computer. 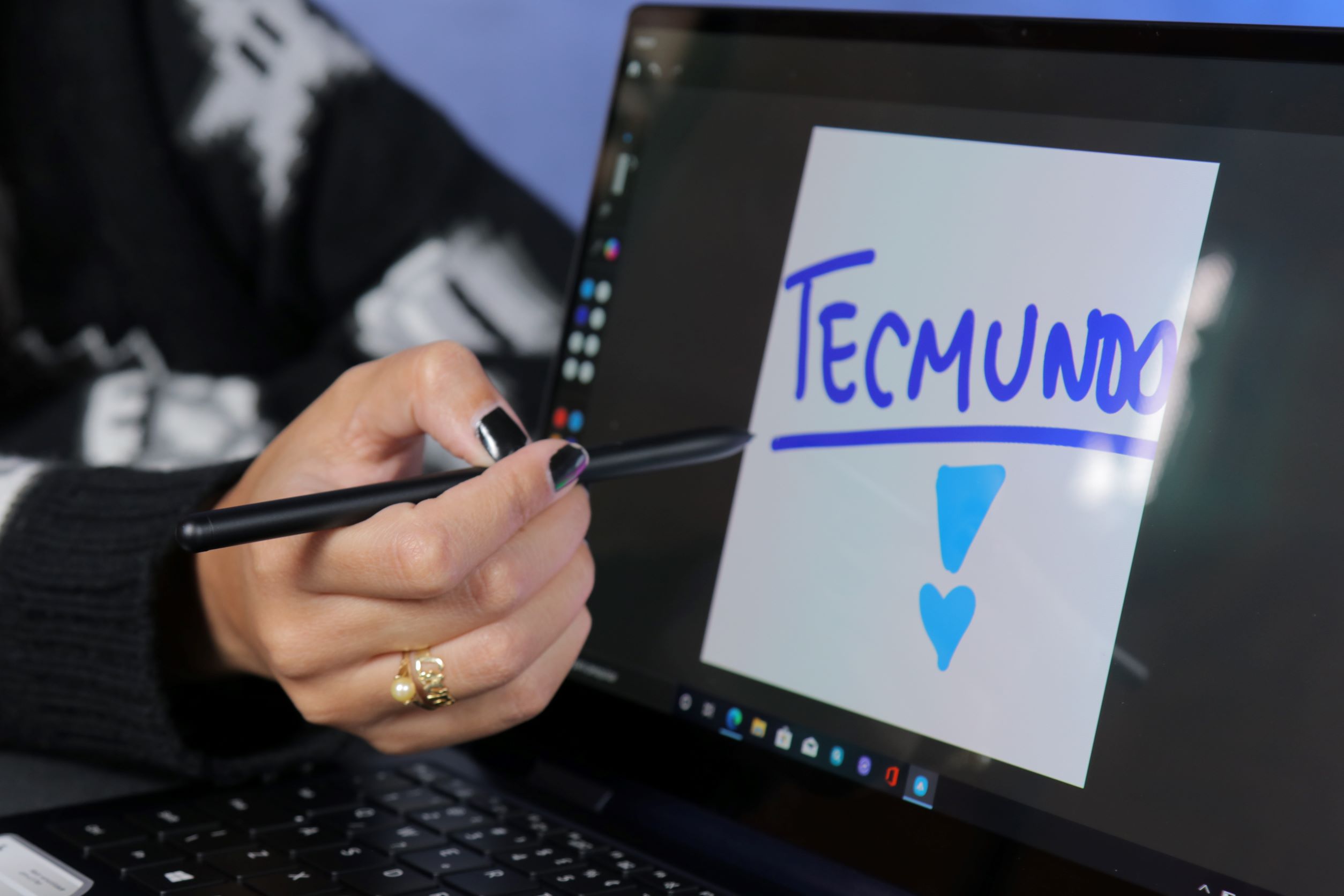 And of course you can’t stop talking about the S Pen, which doesn’t have Bluetooth, but it got an upgrade and got bigger and more like an ordinary pen, which makes the grip easier and gives more precision in use. The Galaxy Book Pro 360 already comes with the PENUP application installed for those who want to get creative and paint, draw, or make whatever art they want with the pen. You can also synchronize the Samsung Notes with the cell phone and abuse the S Pen in the notes.

You can already see that Samsung really wants the Galaxy Book Pro to be an extension of its Galaxy smartphone, further strengthening the proposal to offer a complete ecosystem, like its rival Apple. Now let’s put it to work here during testing for full analysis.