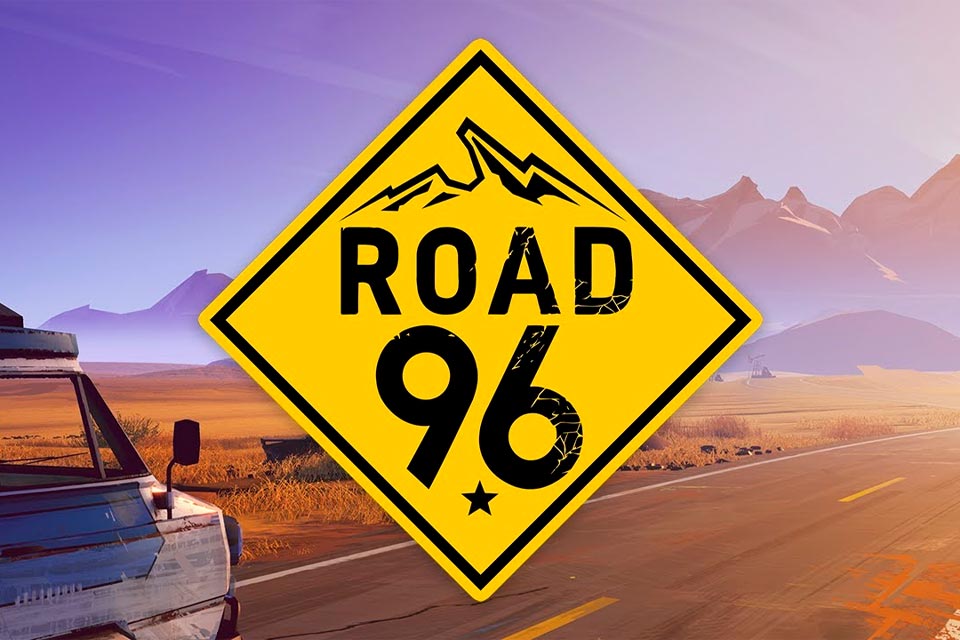 First-person narrative games have earned their place in the video game market. Every year, an indie studio comes up with a captivating proposal that puts you to face the whole situation through the eyes of those who are living it. Some examples that were quite successful were The Stanley Parable, gone home, firewatch and What Remains of Edith Finch.

French company DigixArt, developer of 11-11 Memories Rectold, decided to provide players with an experience within this genre, with beautiful visuals, fun characters and a call for the youth to take a political position against authoritarian, corrupt, fascist and elitist governments, all with a procedural narrative that will make each game different from another and using as reference the works of Quentin Tarantino, Brothers Coen and Bong Joon-ho. Check out our review of Road 96.

RUNNING AWAY AND REBELING

With the 1996 elections coming up and polls pointing to yet another victory for Tyrak, the tyrant president of Petria who has been in government for many years, the youth revolt and decide to leave the country, opting for Route 96, located in the far north, to get rid of the hands of this fascist.

We control 6 missing young people who are seeking to achieve this goal. They don’t have names or even faces, just silhouettes, gender, age, money, energy bar and last seen place. With this, the developer sought to ensure that the player could place himself within each proposed situation, but ends up distancing the player from those protagonists, as it is difficult to differentiate them or cling to their non-existent individualities.

The game’s trump card is not the player-controlled characters, but the characters we occasionally encounter in the title’s six chapters: backpacker Zoe, police officer Fanny, criminals Mitch and Stan, young genius Alex, presenter Sonya, the mysterious taxi driver Jarod and truck driver John. Each of them has its own personality, opinion about the political situation in Petria and relationship with some of the others mentioned. 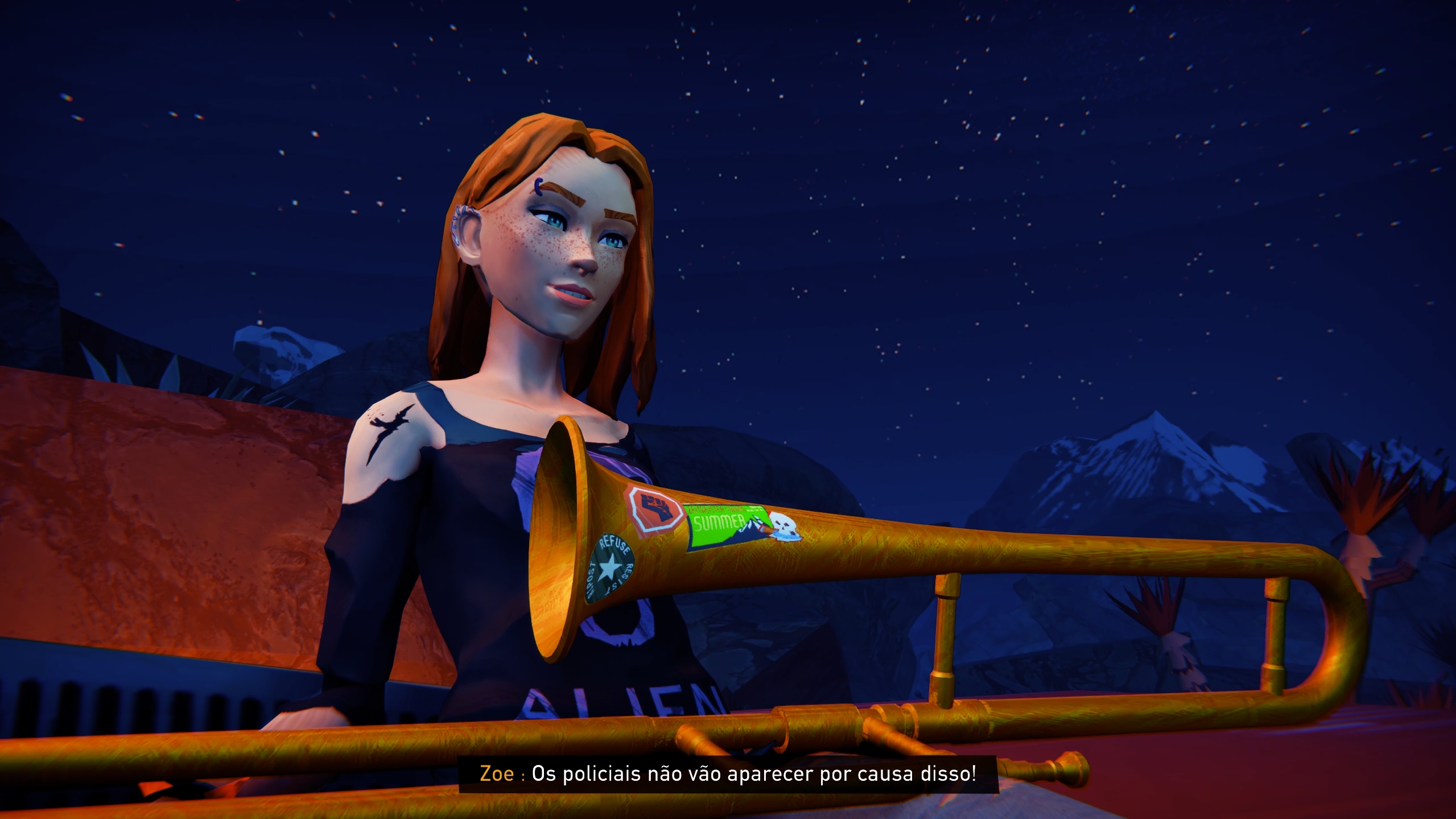 Zoe aims to leave the country and find her freedom.Source:  Voxel

All encounters with them will be unique, with some directly linked to the chapter being played. The order in which the player knows them doesn’t matter, it’s possible to meet Alex for the first time in the first or second episode, but some crucial ones depend on previous interactions. This makes a lot of sense, as you need to have a minimum of context to understand who that person is and why they’re doing it.

MAN, CAN YOU GIVE ME A RIDE?

The way to find them depends on your choice of locomotion, which raises the question of the procedural narrative proposed by the title. Some have their own vehicles, others are taking the bus or hitchhiking. Therefore, the interaction the player will have with them will depend on how to continue their adventure. 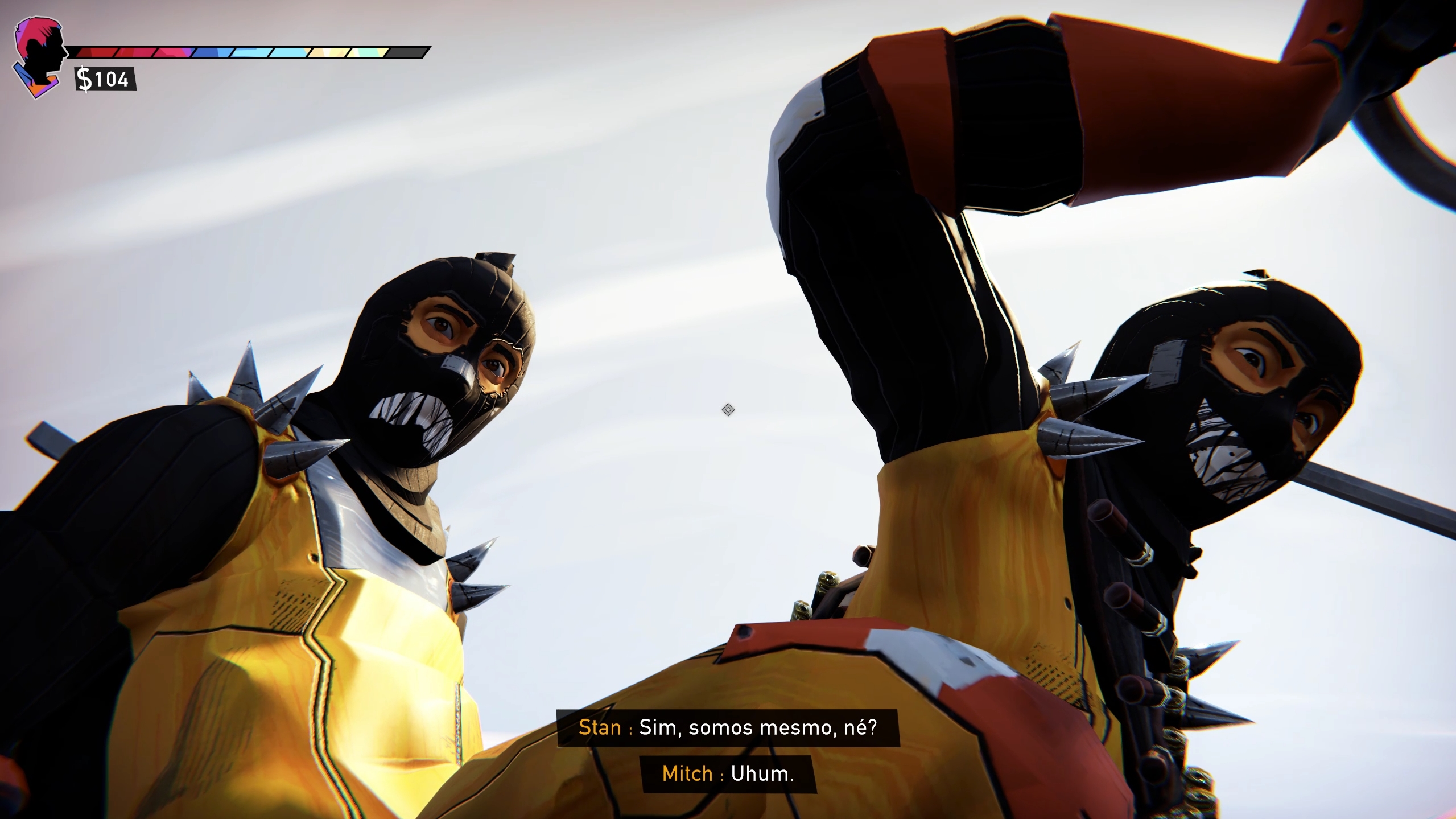 Stan and Mitch taking a radical ride on their motorcycle.Source:  Voxel

In between my attempts to hitchhike, I got into John’s truck and we talked about the Black Brigade rebels while at another time Stan and Mitch took me out to chase a would-be assassin. While stealing a car, I chatted and played video games with Alex and also gave Jarod a ride after his cab broke down. Many of these encounters might not have happened if I had chosen other ways to travel to Route 96.

The game features so many different interactions with these characters that it’s impossible to have them all in the first game. On the loading screens, the player can see in percentage how many encounters they have had with that specific person, which can be expanded in New Game +. 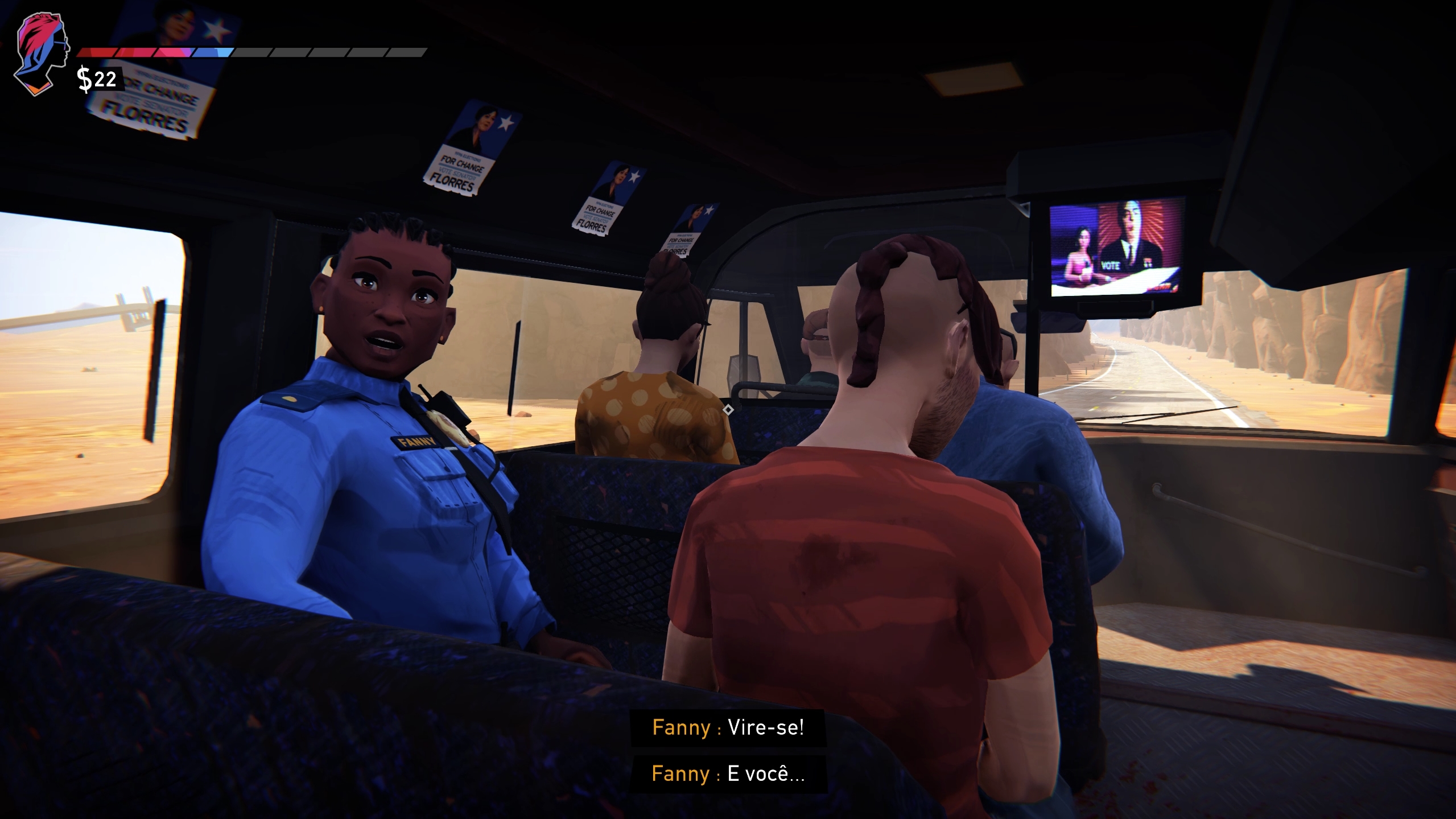 Sonya had to take the bus after an “unforeseen” with her car.Source:  Voxel

It’s a shame that both the chapters and these encounters are so short. The game lasts approximately 6 hours, with 60 minutes per episode. As such, the end of my gameplay left me with a taste of wanting more in my mouth, which could not be fully filled even with a few more hours of gaming. Still, he pleased me a lot, putting a smile on his face or widening my eyes on several occasions.

UNI DUNI TÊ, REVOLUTION WITH YOU!

Road 96 it has a system of choices that impact history. All the protagonists’ speeches are chosen by the player, and they can have different approaches that go according to their political thinking. It is even possible to ask the characters what they think about the elections, the rebel group Black Brigade and give their opinion, which theoretically will affect their future. 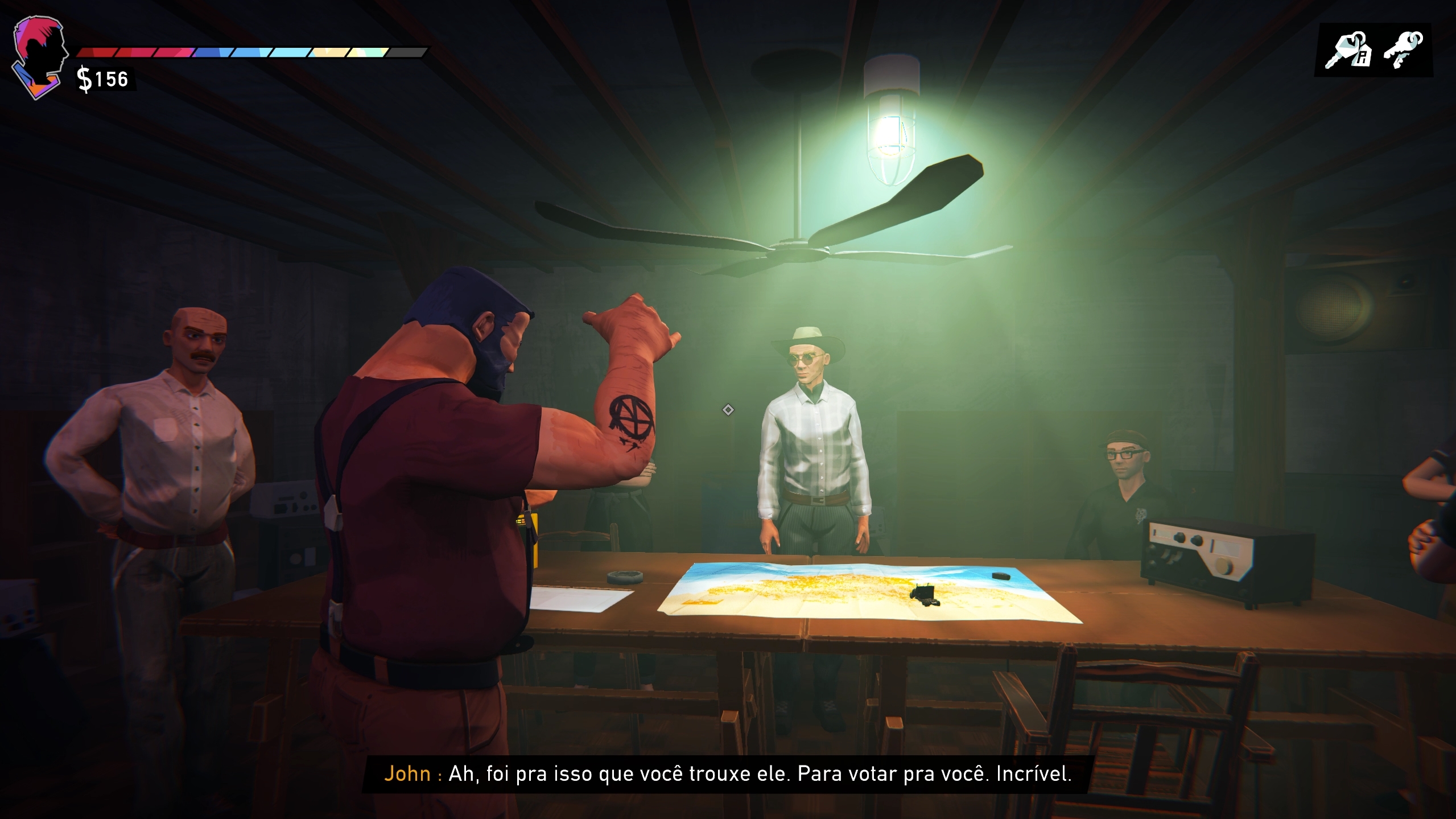 John arguing with Robert during a Black Brigade meeting.Source:  Voxel

During the development of the plot, I couldn’t see this changing the direction of the story with the exception of the last episode. In contrast, some crucial choices do affect the plot. I found myself in situations like choosing which character to save or even conversations that would prevent any kind of problem from occurring. Furthermore, it is possible to die in an attempt to escape and this will be reported on Sonya’s program at the beginning of each chapter as well as unlocking conversation options about what happened.

Thus, the player will be able to solve each situation in different ways, even when fleeing from Petria, but not necessarily feel that all of his choices are really affecting the story’s development. 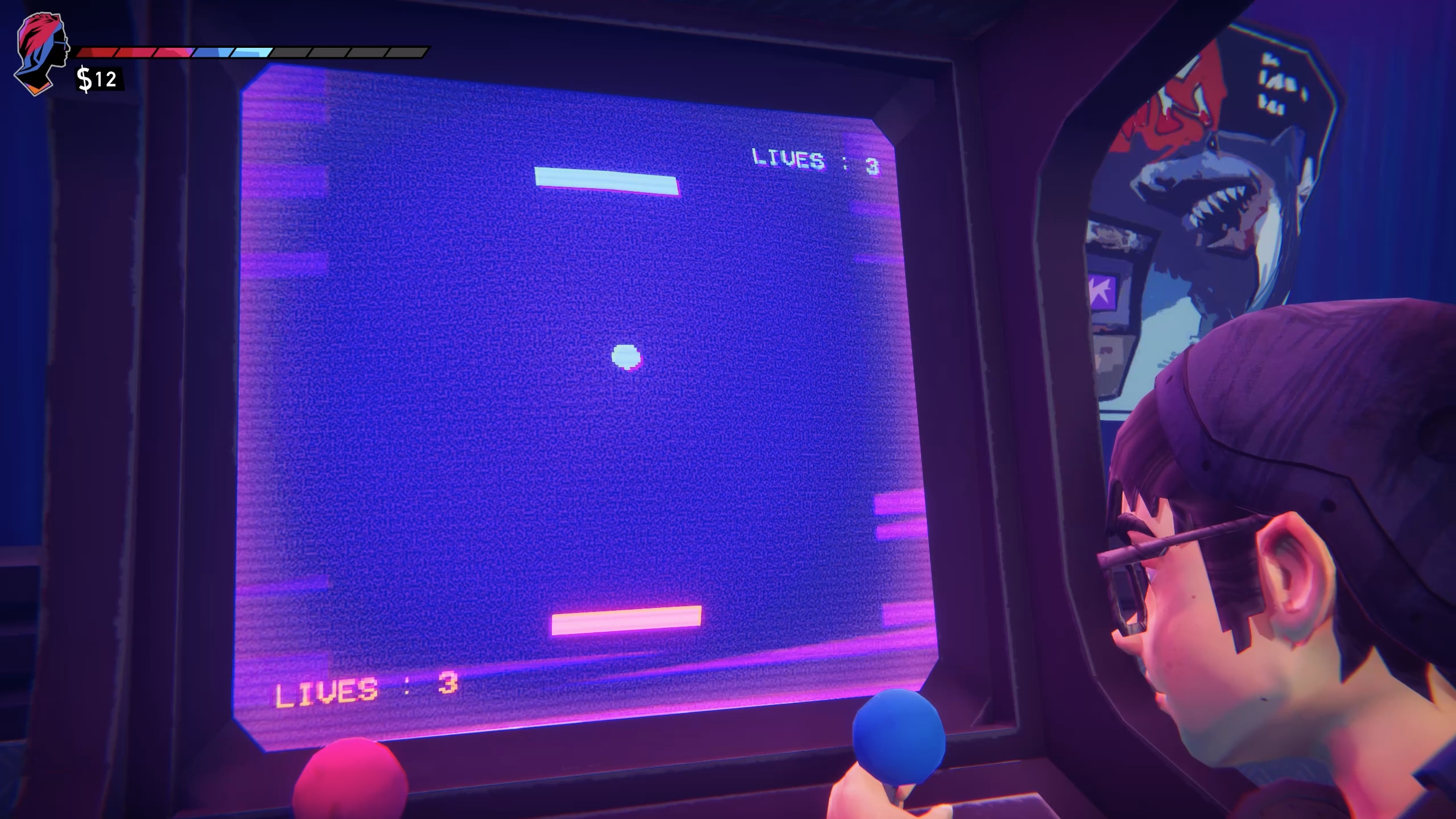 Playing a game of Pwong with its developer, Alex.Source:  Voxel

The visuals are wonderful with a cartoonish feel, bringing beautiful lighting, reflections, environments combined with good facial expressions and animations. It’s not something from another planet, but it will please those who are used to playing independent titles like this one. 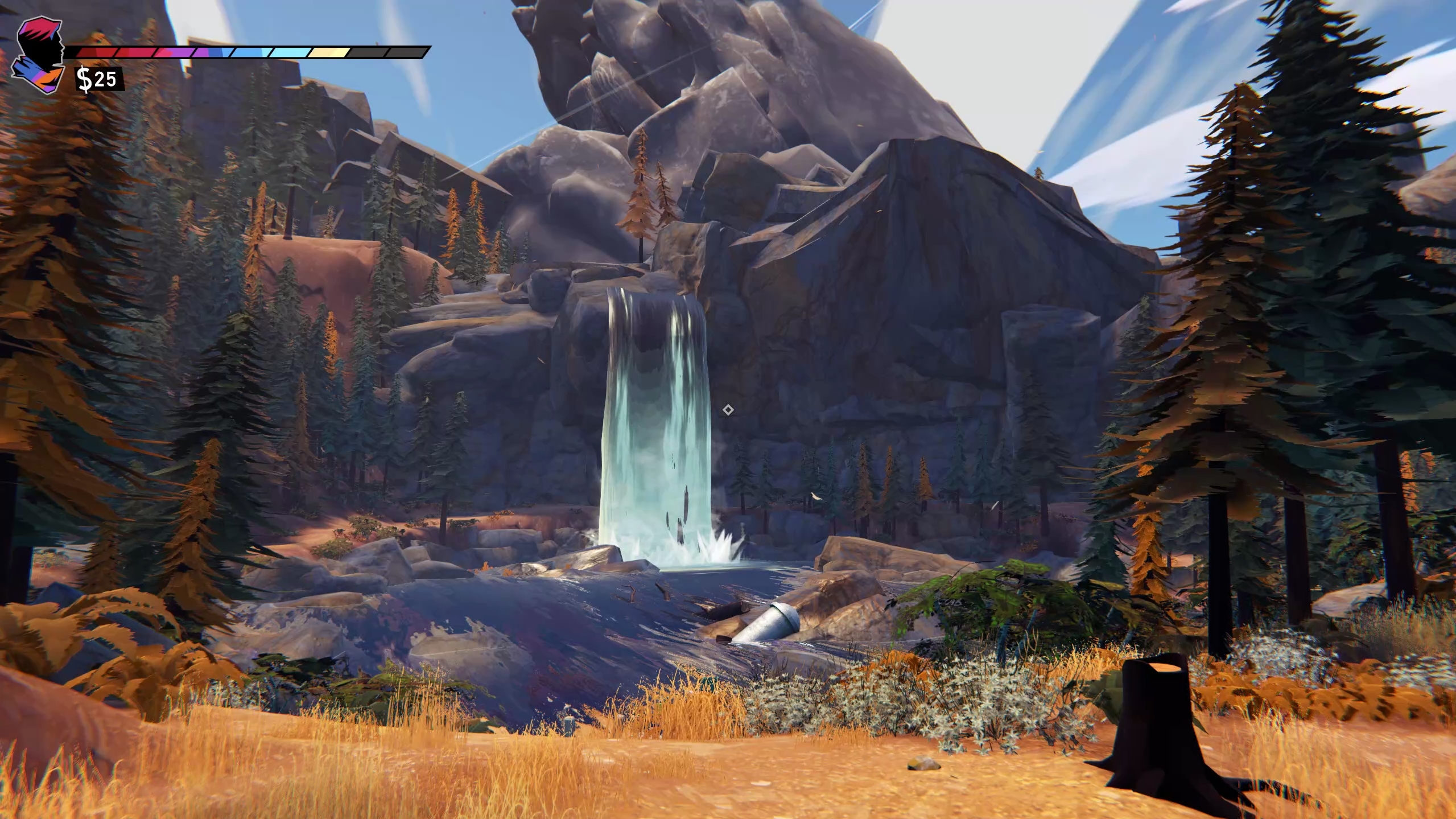 The waterfall means the border is close.Source:  Voxel

Performance is also very good. On an RTX 2060, he ran most of the game at the best possible setting above 70fps. At three specific times, the frame rate dropped to 40, because they were outdoors with rain or indoors with strong lighting and lots of reflections. But it’s worth mentioning that I recorded all my gameplay using GeForce Experience, which reduced the total fps by approximately 10%. Thus, a weaker video card can run above 60fps at high without much difficulty.

Finally, the soundtrack is amazing, featuring electronic and pop songs. Several tracks are associated with characters, which already gives you a preview of who you’ll meet as soon as you start a new part of the episode. Several cassette tapes are scattered throughout the game, featuring all the songs on the score. It is possible to play them at some specific times, such as in a car or in front of a waterfall. Personally, I’m listening to Cocoon’s “The Road” nonstop. 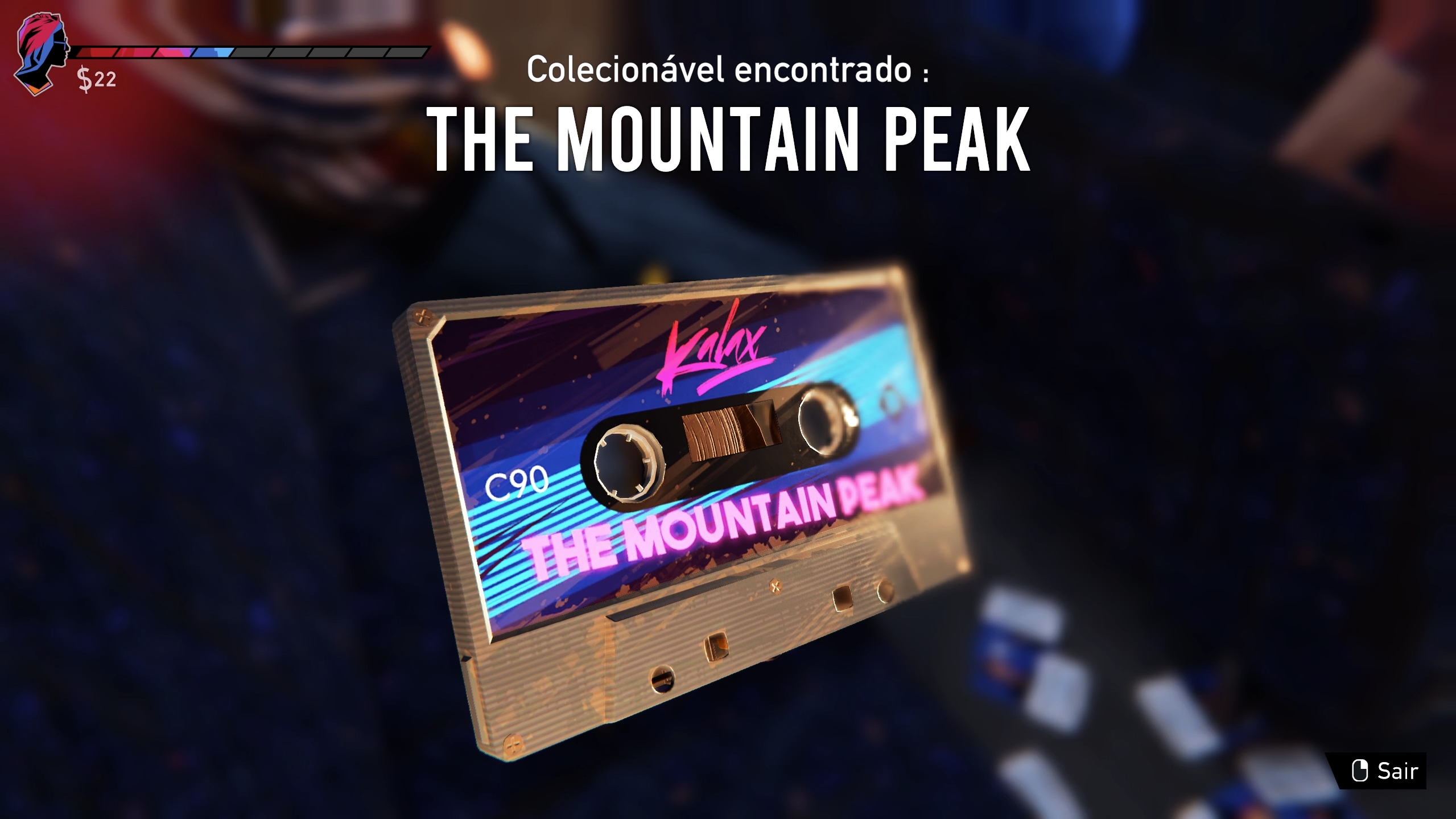 Cassette tapes can be found, received or stolen.Source:  Voxel

Road 96 aims to provide an experience that moves between a “good vibes” with captivating characters and a revolutionary spirit on the part of the youth who want to change the future of their country. Each conversation will make you understand more about that country and its complicated political situation, which will make you think more about how our nation is doing and what we can do to improve it. It is an essential recommendation for those who enjoy narrative games, mainly because of the issue of bringing procedural encounters as a differential.

“Road 96 is the revolutionary storytelling experience 2021 so much asked for and needed, without forcing the player to choose a single approach”