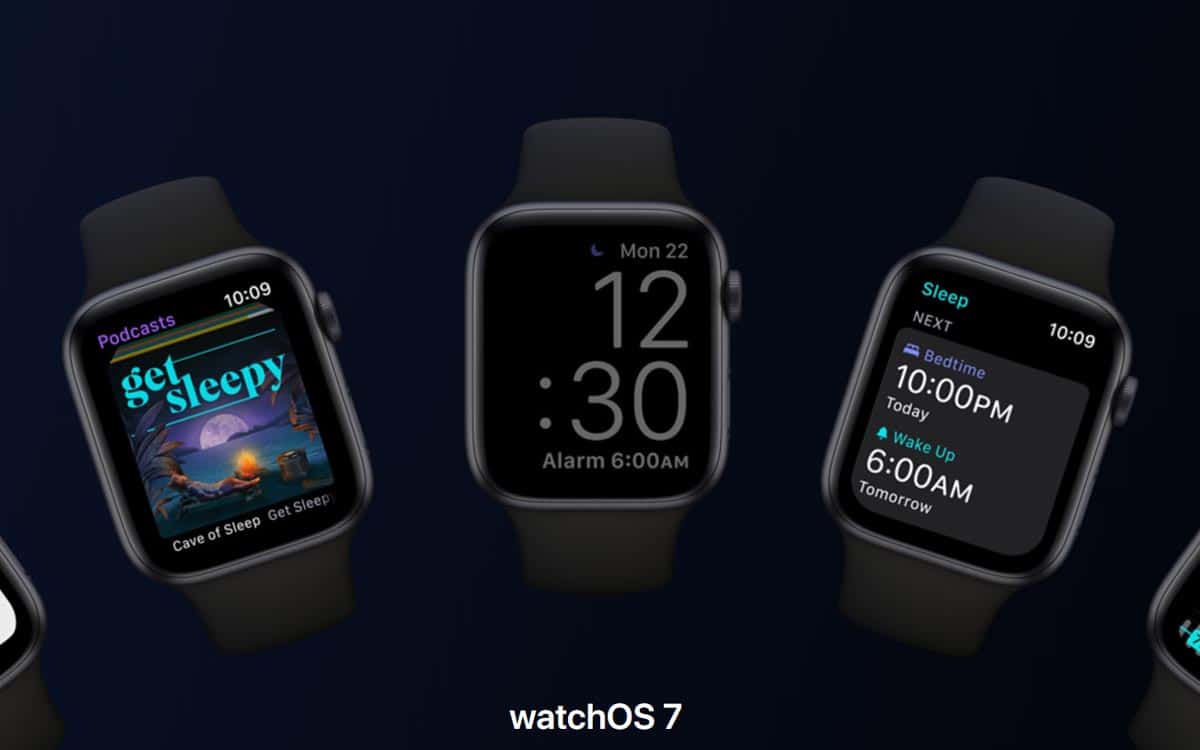 Apple will soon launch watchOS 7, the new version of its wearable OS, alongside the release of the Apple Watch Series 6. But the updated operating system will also be available on older models of the connected watch. We have put together all the important information you need to know about watchOS 7, and in particular the new features planned, to introduce them to you in this paper.

On the occasion of the virtual WWDC 2020 which was held at the end of June, Apple provided us with details on the evolutions of its operating system for connected watches during a presentation of watchOS 7, the next major OS update. In this file, we have summarized everything we know about watchOS 7, keeping in mind that the Cupertino company can of course have some last minute surprises in store for us.

📆 When will watchOS 7 be available?

Currently, watchOS 7 is in beta developers. They have access to it in order to develop applications and updates compatible with the new version of the operating system and to take advantage of the new features provided by it.

Apple has announced plans to launch the public beta in July. When it becomes available, everyone can take advantage of it, just sign up for Apple’s beta software program. Keep in mind that this will not be a stable release yet and a few bugs could be present. But the overall experience should still be quite satisfactory.

Finally, watchOS 7 will be released in the fall (September-October) in its final version at the same time as the Apple Watch Series 6, the new generation of connected watches from the Apple brand.

⌚ Which Apple Watches are compatible with watchOS 7?

Apple is rather generous in terms of software monitoring of its products. We can see it in the smartphone market, its iPhones are updated much longer than their competitors at Android. When there is no hardware constraint to update a device, Apple usually offers an update.

Here is the list of Apple Watch that will be entitled to watchOS 7:

Apple Watches running watchOS 7 can be paired with any iPhone running iOS 14, the next major software update for Apple mobiles. Find here the list of iPhone compatible with iOS 14 (from iPhone 6s and all newer iPhones).

🎁 What are the new features of watchOS 7?

Most of the features we will mention below will be available on all Apple Watches running watchOS 7. But it is possible that due to a question of hardware restriction, some of them are reserved for Apple Watch Series 6.

Dials are very important in smartwatches for both aesthetic and practical reasons. They allow you to customize your smartwatch to suit your taste and display important information in a way that suits the user.

But the choice is limited, and Apple wants to fix things with watchOS 7, which allows you to find and share dial configuration combinations based on activities and lifestyle. They can be edited and shared simply by different means: simple message or email, to download from a website or from the App Store …

Developers can now view several complications per application on a single dial, thus blowing a limit on older versions of the OS. As a reminder, the complications are equivalent to smartphone widgets, but are dedicated to Apple Watch.

The dials directly offered by Apple have been revised, with more customization options and easier access to the applications the user uses the most. In addition to the Chronograph dial already available, a dial Pro Chronograph made his appearance. His particuliarity ? It displays a tachometer to calculate the speed of a moving object. The Photos dial now features a color filter, while the Extra Large dial supports a richer complication display.

The anomaly is finally fixed, Apple finally offers an option to native sleep tracking with watchOS 7. It’s about time. Its smartwatches already had the sensors necessary for such a functionality to work properly, but until now they lacked directly integrated software solutions. Users then had to fall back on third-party applications.

The new tool seems in any case the most complete, with all the follow-up measures and all the sleep management options that we find in the competition. What better way to understand your sleep needs, find the ideal bedtime or even set up an effective sleep routine.

Thanks to the’accelerometer that equips the Apple Watch, micromovements triggered by breathing during sleep are detected. The smartwatch records and analyzes them in order to calculate the phases of sleep and the time spent sleeping each night. Data that can then be consulted in order to better understand the way in which one’s sleep takes place, and to adjust one’s habits accordingly to improve it.

With the service Wind down, you can indicate the time you want to sleep and the time you want to get up. When it’s time to sleep, your Apple Watch will automatically go into Do Not Disturb mode to avoid getting sucked in by notifications and dimming the screen. Background music or a mediation session can also be scheduled. If the battery level is low, Apple Watch can alert its user that it may be time to charge it an hour before the specified bedtime.

For the alarm clock, you have the choice. Soft sounds can be played, or you can also rely on thesilent haptic alarm (watch vibration), which has the merit of only waking you up. Your partner can thus continue to sleep peacefully.

The Exercise application already offered many choices of activity, it has been enriched with four additional ones: Strengthening, Dance, Functional strengthening and Recovery. These four new physical activities therefore have a dedicated mode for measuring heart rate, wearer movements and all relevant data as accurately as possible.

For example for dance, the information collected by the heart rate sensor, the accelerometer and the gyroscope are cross-checked and submitted to an algorithm, which will associate the data with movements and an intensity measurement, to then estimate calorie expenditure for the session.

As usual, it is possible to access all the data presented visually on the mobile application, which is no longer called Activity as before, but has been renamed Fitness. It has also undergone a redesign and is now more complete, clearer and more orderly.

Before watchOS 7, cycling a route using Maps navigation without taking out your smartphone could be a challenge. There was no visual of the direction to take, you had to settle for haptic feedback on the wrist to know when to turn. Now the directions will be readable directly on Apple Watch, and you will be notified when you need to take a special action, such as taking stairs or walking a section of the path.

You have several options available, it’s up to you to choose the one that suits you best. You can thus avoid steep slopes for example, or on the contrary take the most direct route even if it is difficult to cover.

watchOS 7 teaches us how to wash our hands better

The Apple Watch has never done so well with consumers as it has since its shift to health. In this troubled time of the COVID-19 epidemic, watchOS is adapting to help us wash our hands more effectively, and thus limit the spread of disease.

Thanks to motion sensors, mic, and a dose of machine learning, an Apple Watch running watchOS 7 is able to detect when you’re washing your hands. It then triggers a timer of 20 seconds. If you stop washing your hands first, the smartwatch prompts you to continue a little longer until you reach the end of the stopwatch.

The frequency and duration of each hand washing are available on the Health mobile application, which also has a didactic purpose since it explains the importance of washing your hands regularly.

Alerts in the event of prolonged exposure to noise

Still in the area of ​​health, watchOS 7 also monitors our hearing. It is already possible to measure the level of ambient noise and the duration of exposure to it from watchOS 6, but its successor goes even further.

When a user listens to audio content with a high noise level and too long, a notification appears advising them of the risk of hearing loss resulting from their behavior, with explanations of the long-term hearing loss.

Apple relies on data from the World Health Organization (WHO) for this feature, that a sound level of 80 decibels for 40 hours per week is acceptable and does not pose a risk to hearing, but we must start to be wary as soon as we exceed these figures.

The Health app tracks exposure time to high decibel levels and allows you to set a sound level limit that should not be exceeded when headphones or earphones are plugged in.

When it comes to voice assistants, Apple still has some way to go. Everyone agrees that Google Assistant is more efficient than Siri, and even Alexa seems to do better in the benchmarks. Fortunately, Cortana is left so as not to wear the class donkey hat.

Anyway, Siri has new features on Apple Watch with the watchOS 7 update. It is now possible to ask it to translate from and to a number of languages, as soon as iPhone with iOS 14. Text dictation is also improved, while announcing messages with Siri lands on smartwatches.

The Shortcuts Siri programs, which allow you to schedule one or more tasks to launch quickly, are now available on Apple Watch as complications.

Other features like Camera Remote and Sleep are also joining the ranks of present services in the form of complications.

These are primarily intended for medical personnel to assess the ability of patients to move around with a disability or if they are elderly. The measures concerned are: low intensity cardio fitness, walking speed, speed of descending stairs, speed of climbing stairs, distance covered on foot in six minutes, time spent on double support, step length and asymmetry.