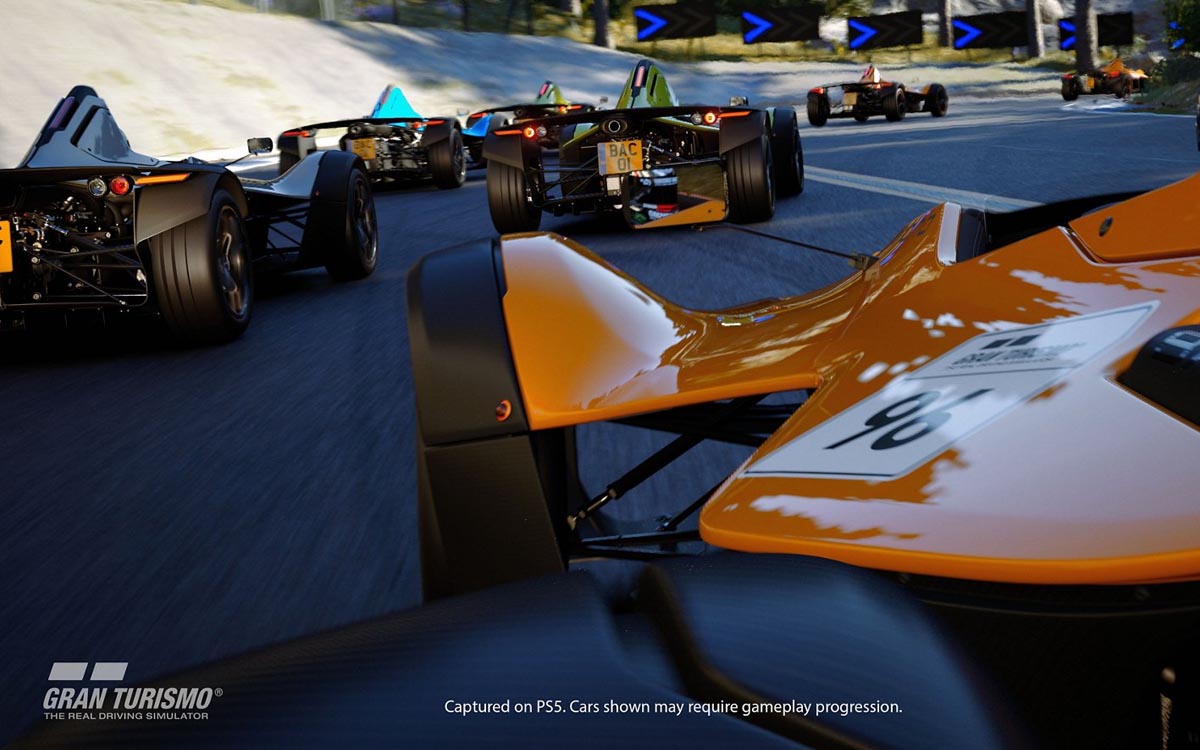 Gran Turismo 7 is one of the most anticipated games for the PS5’s early life. The car racing game intends to take the best of its old titles and current technologies to offer a simulation that will restore the image of the famous license after a Gran Turismo Sport which has not convinced much.

Legend among car simulation games, Gran Turismo is one of the big names in the PlayStation ecosystem. The titles of the saga, developed by the Polyphony Digital studio, have punctuated the calendar of game releases on Sony consoles since the first PlayStation. Since competing with Forza games on Xbox, Gran Turismo no longer enjoys hegemony as it once knew it. But a new Gran Turismo still manages to create the event.

When will Gran Turismo 7 be released?

After Gran Turismo 6 in 2013 on PS3 and Gran Turismo Sport in 2017 on PS4, it is now the turn of Gran Turismo 7 to show off. First scheduled for the first half of 2021, the game has finally been postponed for a launch scheduled for 2022, without further details for the moment. “Gran Turismo 7 has been impacted by production challenges related to Covid and the release is therefore moving from 2021 to 2022. With the current pandemic, the situation is dynamic and changing, and some critical aspects of the game’s production have been slowed down. over the past few months. We will let you know more about the release date of Gran Turismo 7 as soon as possible ”, reacted Jim Ryan, president of Sony Interactive Entertainment, at the time. PlayStation will not be present at virtual E3 2021, so the announcement should come in a State of Play during this year.

Will Gran Turismo 7 be available on PS4 and PSVR 2?

For the moment, Gran Turismo 7 is only announced by Sony Entertainment on PS5. The title is highly unlikely to be ported to PS4 as old gen consoles would technically limit developers too much to create a graphical experience worthy of what is expected of the new generation of consoles.

On the other hand, it is far from impossible that Gran Turismo supports the future PlayStation VR 2, recently made official. Gran Turismo Sport was supposed to be fully compatible with Sony’s virtual reality hardware, but ultimately settled for a VR mode. Gran Turismo 7 should correct the situation in this area. Kazunori Yamauchi, CEO of Polyphony Digital, has declared his interest in this technology and the PS5 and PSVR2 are expected to greatly expand the range of possibilities when it comes to virtual reality. Gran Turismo 7 is even likely to be one of the figureheads of the PlayStation VR 2. 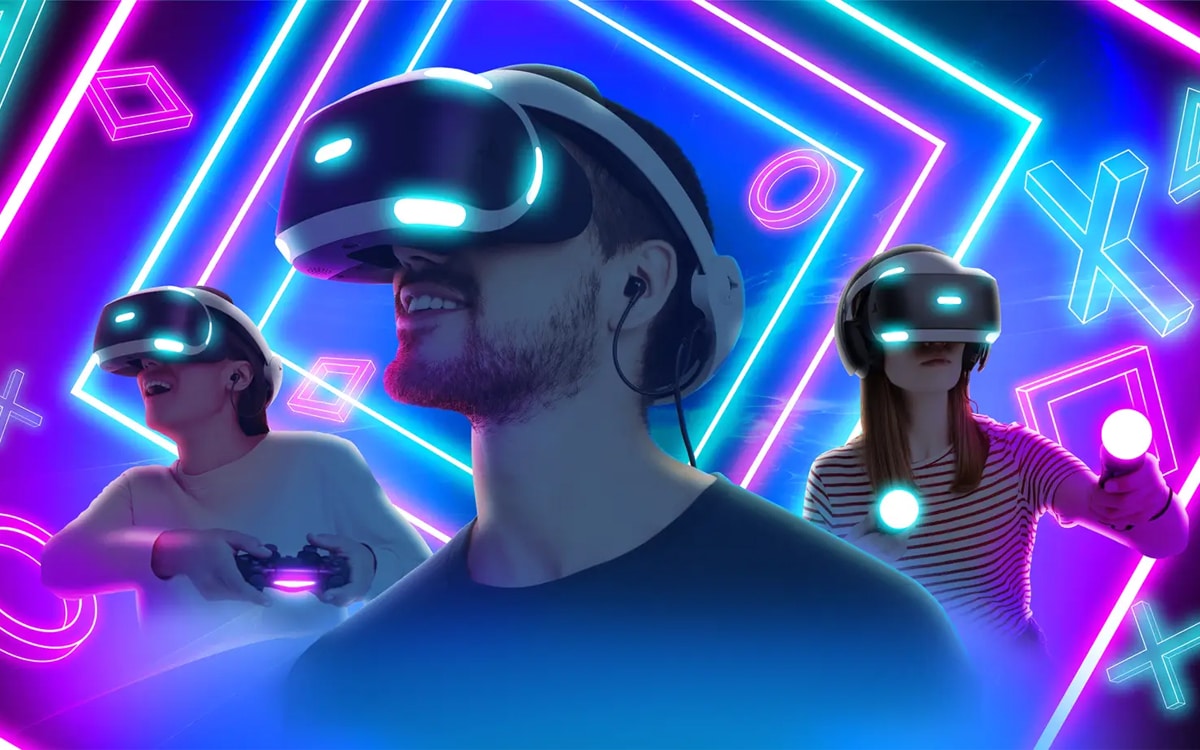 Until now, the Gran Turismo has always been PlayStation exclusives. And if it seems impossible to see this new opus land on other consoles than the PS5, we can think that the title can make a place on PC some time after its launch on PS5. Sony seems to have revised its policy on this subject and is turning more and more towards computers, for example the release of Horizon Zero Dawn on PC for example.

Traditionally, Gran Turismo games have been designed to be graphic slaps exploiting the full potential of the consoles they are released on. The launch of a license title at the start of the new generation is therefore necessarily exciting for lovers of beautiful graphics.

In theory, the PS5 is capable of playing games in 4K at 120 frames per second through an HDMI 2.1 port. In practice, no game achieves this level of performance, and Gran Turismo 7 should not be expected to be the first. The real goal announced would be to achieve 4K at 60 frames per second for Gran Turismo 7, with HDR compatibility and ray-tracing as a bonus. Such performance would already be quite satisfactory. But for now, if 4K HDR 60 fps is in the pipeline, it’s not sure that ray-tracing will be offered at this level of performance. It is possible that several modes are available, one to reach 60 frames per second, but deprived of ray-tracing for example, the other offering superior graphics to the detriment of fluidity. 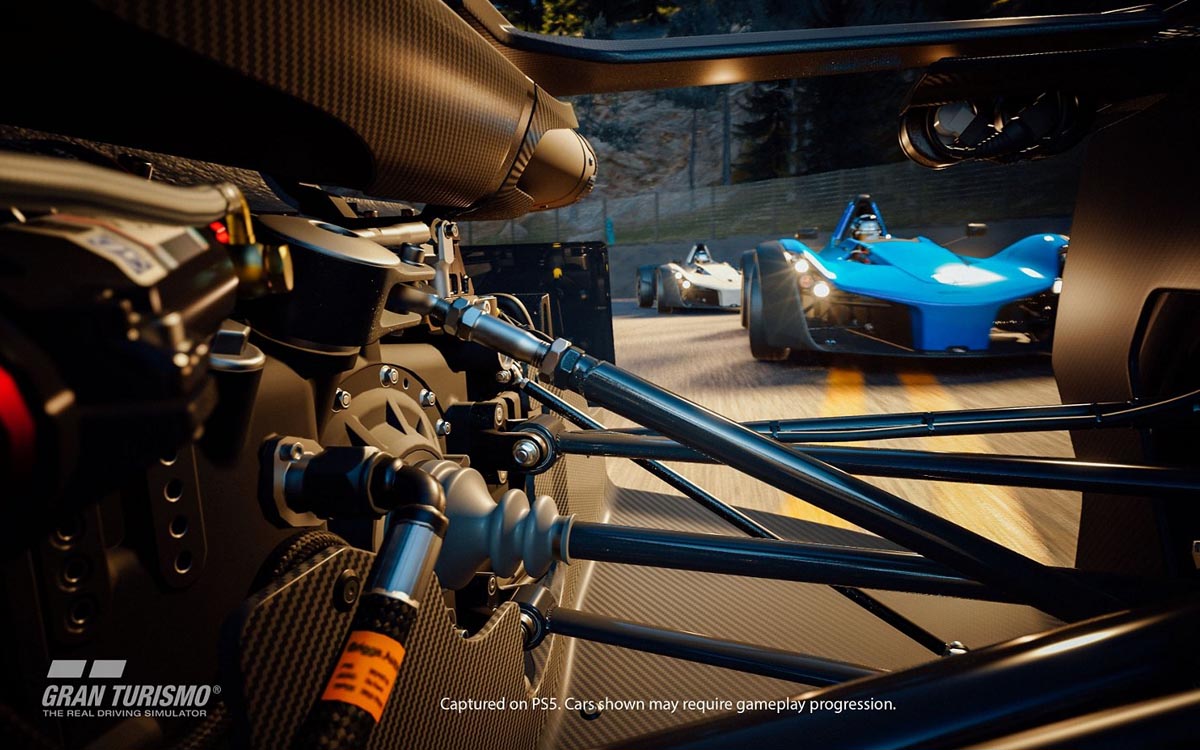 An update should bring 8K support to the PS5. It would not be surprising if Gran Turismo 7 is the first title to benefit from it. Not that the game is fully compatible with such a definition, but we can imagine for example a specific and limited mode dedicated to 8K so that users equipped with an 8K television can rinse their eyes. Sony has just launched this year the Bravia XR Z9J televisions supporting 8K. Better not to rely on this as communication between Sony’s various divisions is very limited, but there are all grounds for hope. We saw Gran Turismo Sport run in 8K at 120 fps during a demonstration at the 2018 International Broadcast Equipment Exhibition, we know that Polyphony Digital is very interested in improving the quality of the image and framerate.

What is the gameplay of Gran Turismo 7?

Kazunori Yamauchi has promised a homecoming for this Gran Turismo 7. He indicates that this new opus will be inspired by the gameplay of the first and the fourth episode of the license, evoking “A traditional large-scale experience” and stating that historic Gran Turismo fans will get their fix of nostalgia with this episode. This should not prevent the title from adapting to its time, the boss of Polyphony Digital wishing to keep the avant-garde dimension of the saga. Even if it was not unanimous, Gran Turismo Sport will also be an inspiration for GT7, with among other things the resumption of the championships.

GT Simulation Mode, absent from GT Sport, will return with GT7. There will also be the driving school, the tuning store, the used car store and special events. Everything will be accessible via a Gran Turismo 4-style map. Vehicle settings and customization should also take pride of place in the game. 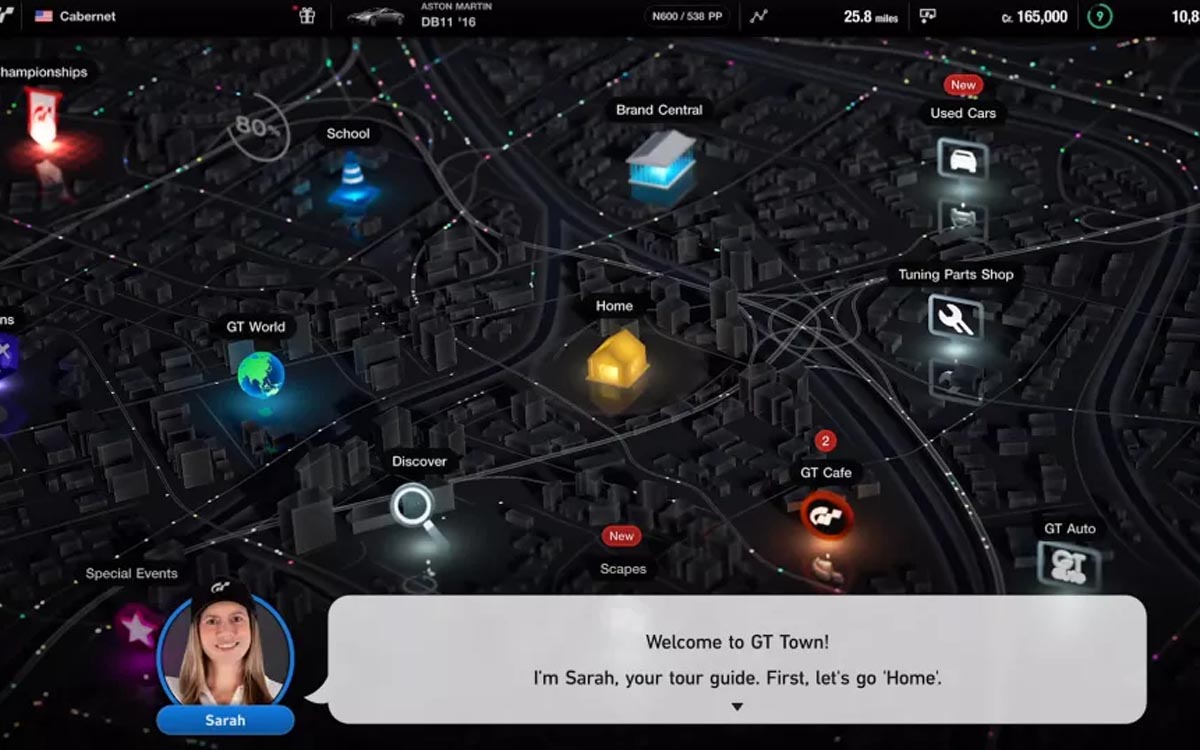 Gran Turismo 7 will exploit the features provided by DualSense for a more immersive experience and more precise vehicle control. The haptic feedback will make the player feel the grip of the tires on the road and the slight unevenness of the tarmac. The adaptive triggers will allow to realize the contrast of the weight of the brake pedal at various levels of sensitivity, the vibrations according to the ABS and the variation of the weight of the accelerator according to the different types of cars.

The game will also take advantage of the SSD capabilities of the PS5 to offer much faster loading times. In particular, it will be possible to choose your car from a selection “Without any loading time”. For audio, the game supports sound technology Tempest 3D Audio Tech on compatible headsets. This feature provides a spatial dimension with an effect of depth and height of the audio, and makes it possible to identify the presence of other vehicles through sound.

Which tracks and which cars in Gran Turismo 7?

GT Sport had disappointed with the absence of iconic Gran Turismo circuits, GT7 should correct the situation. In the first big trailer released by PlayStation, we see scenes of driving on the mythical Trial Mountain, which has been seriously redesigned for the occasion. We can even see that the last corner, which often decided the winner of the race, has been reworked. 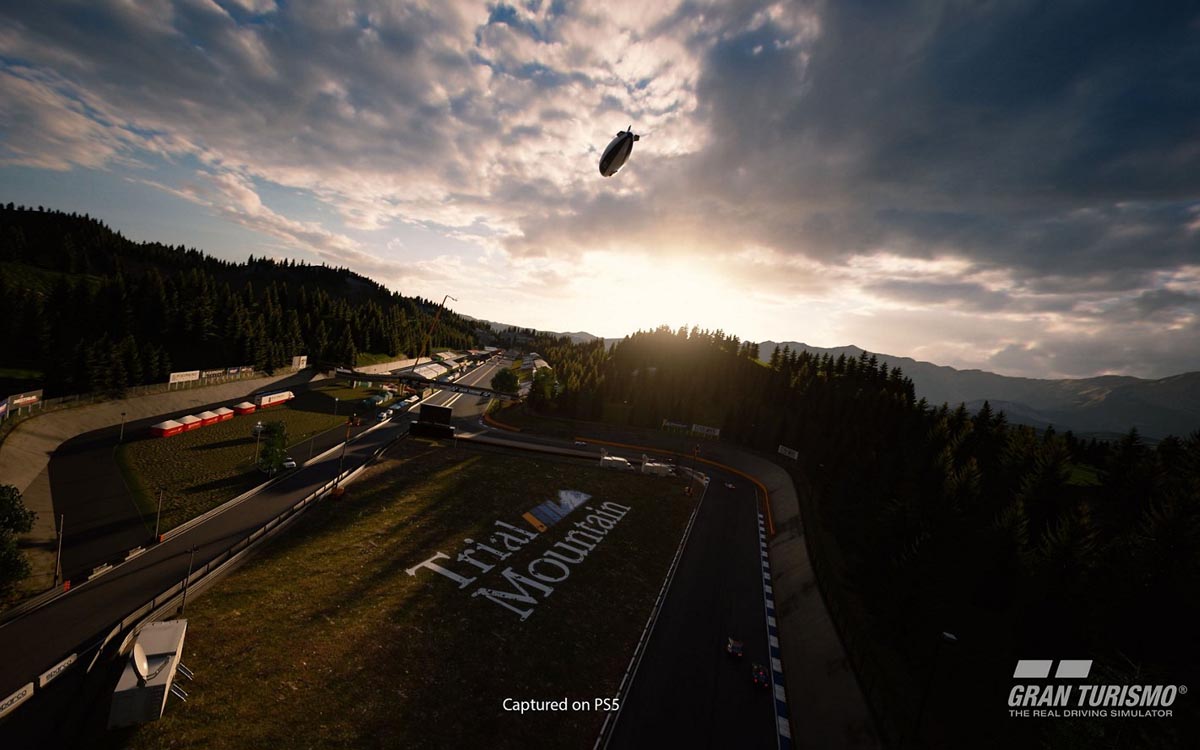 We know that Polyphony Digital is planning to relaunch historic circuits under the license, which GT Sport had left aside, such as Deep Forest. Kazunori Yamauchi had mentioned a few years ago the difficulty of adapting old circuits to new video game standards. He mentioned in particular problems of scale of certain elements which could not pass any more with recent graphics and that it is not enough to transpose the data of a circuit of an old one to a new engine.

Other circuits that will appear on Gran Turismo 7 include Northern Isle Speedway, Willow Springs and Daytona.

The list of cars in the game has not been released so far. The catalog was very generous on Gran Turismo 6 then much narrower on Gran Turismo Sport. We should get closer to the 1,216 cars that GT6 contained, but certainly not from launch. Updates should add vehicles as we go. In any case, the trailer posted online last year confirmed the presence of these 22 models:

Trailers and trailers for Gran Turismo 7

For now, only one real trailer has been released by PlayStation on June 11, 2020, during a State of Play revealing several upcoming titles for the PS5, not yet released at the time. Many trailers and gameplay sequences are expected in the coming months, with a pace that will increase as we get closer to the release date.