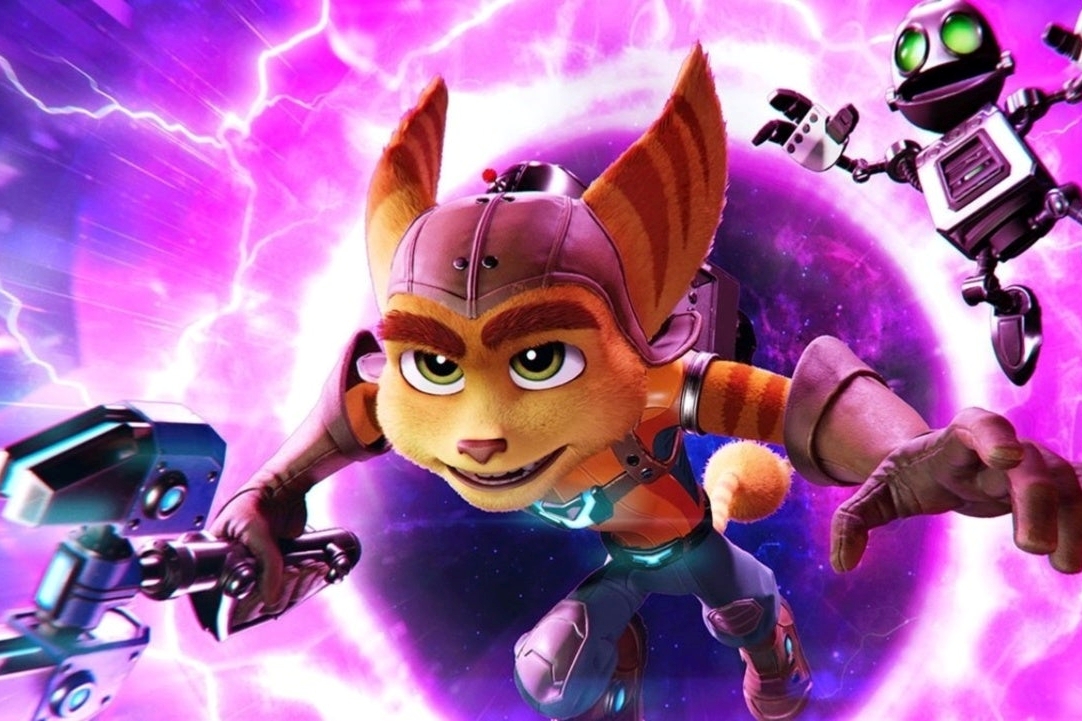 Last week, we received an invitation from PlayStation Brazil to participate in an exclusive event for the press to see some exclusive content from Ratchet and Clank: Rift Apart, the next Playstation 5 exclusive that arrives on June 11th. We talked to producers, watched unpublished videos and presentations, but unfortunately we didn’t play. But, we will tell you all that we saw interesting. If you prefer, watch everything in the video below:

At this point in the championship it is difficult to find someone who does not know the franchise Ratchet & Clank. The success of the platform game series created and developed by Insomniac Games and published by Sony Interactive Entertainment even won a film in 2016.

The duo of charismatic protagonists has had more than a dozen games since 2002. In 2016, in the same year as the film, the original adventure received a remake for the Playstation 4.

For those who do not know, the games take place in a universe of science fiction and accompany the lombax Ratchet, who works as a mechanic, and his robotic friend Clank while saving the universe from dozens of dangers and evil forces.

The games have a great good mood and various types of exotic weapons and even fun, which make the gameplay interesting: and which fan there does not know Sheepnator, is not it?

Unlike what many imagine, Rift Apart is not a continuation of the 2016 remake, but of the last PS3 game: Into the Nexus. Keep this in mind when you go to play. In the new adventure, the two protagonists are already recognized heroes in the galaxy, for all their adventures.

Ratchet and Clank it has that spirit of Saturday morning cartoons, which manages to enchant from the youngest to the oldest gamers. It was fully developed for the Playstation 5, it is the game in which Sony wants to show the power of its new generation console, the game will have agile jumping mechanics made possible by the SSD of the new hardware.

During the digital press event, we interviewed Mike Fritzgerald, director of technology at Insomniac, according to him, this is the most impressive feature of the new title. “If you are going to choose a moment that most impresses you, it would be the dimension changes in real time, the first time the player touches one of those dimension change crystals, it is something incredible. It is one thing to watch this moment watching a video, but it is quite different with the control in hand ”, he says. For relying so much on this NVMe SSD technology on the new console that, unlike some other Sony exclusive games like Spider-Man: Miles Morales and Horizon Forbidden West, Rift Apart will not have a version for Playstation 4. Then you can even ask yourself: “But if Miranha came to PS4 why doesn’t this game come too?”

Explaining very briefly, Miles Morales if you “take advantage” of the power of the SSD, practically eliminating loadings on quick trips and at specific moments of your journey through New York. Already Rift Apart built specifically for this technology, Ratchet changes worlds instantly and several times during the exploration of a level. If this were to run on PS4 we would have huge loadings in each of these crossings, that is, you would literally have to spend more time on loading screens than playing games and nobody wants that, right?

Ratchet & Clank: Rift Apart will introduce us to a new protagonist: Rivet, a Lombax from another dimension who joins Clank after he separates from his partner Ratchet. 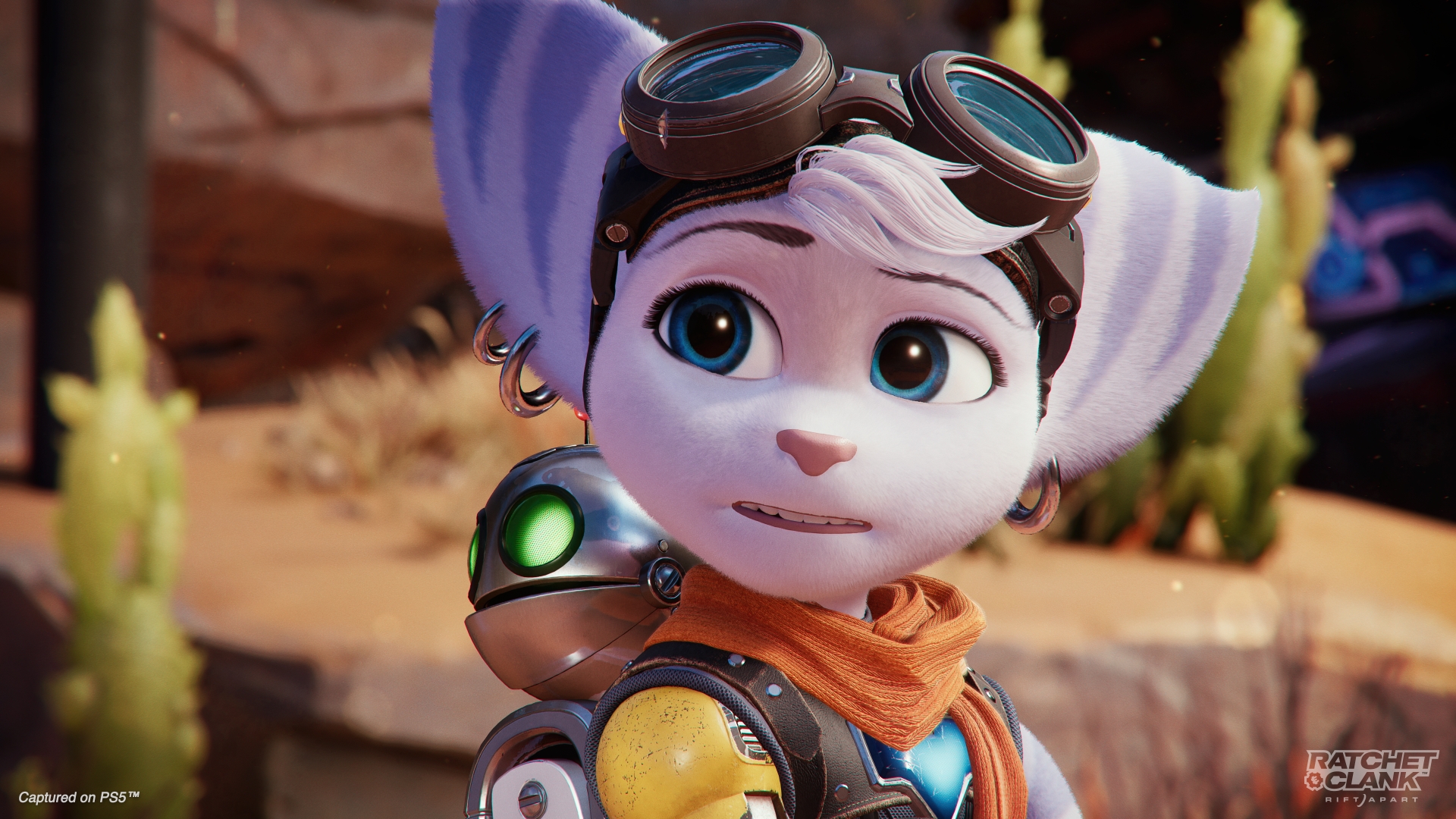 During the event, little was said about her past. The only thing we know about the little one is that at some point she lost her arm and replaced it with a bionic prosthesis and that she is part of a resistance group to Emperor Nefarius. In her dimension, Nefarius dominated the galaxy and commanded it with iron fists.

Rivet is the apple of the eye of Insomniac. Whenever we talk to the producers about her, you can see the joy with which they talk about the new character. We’ll have to wait and see what her role is in the game, but the way everyone at Insomniac talks, it looks like it’s going to be a great addition to the franchise and it’s probably not going to be the only game she’s going to be in. 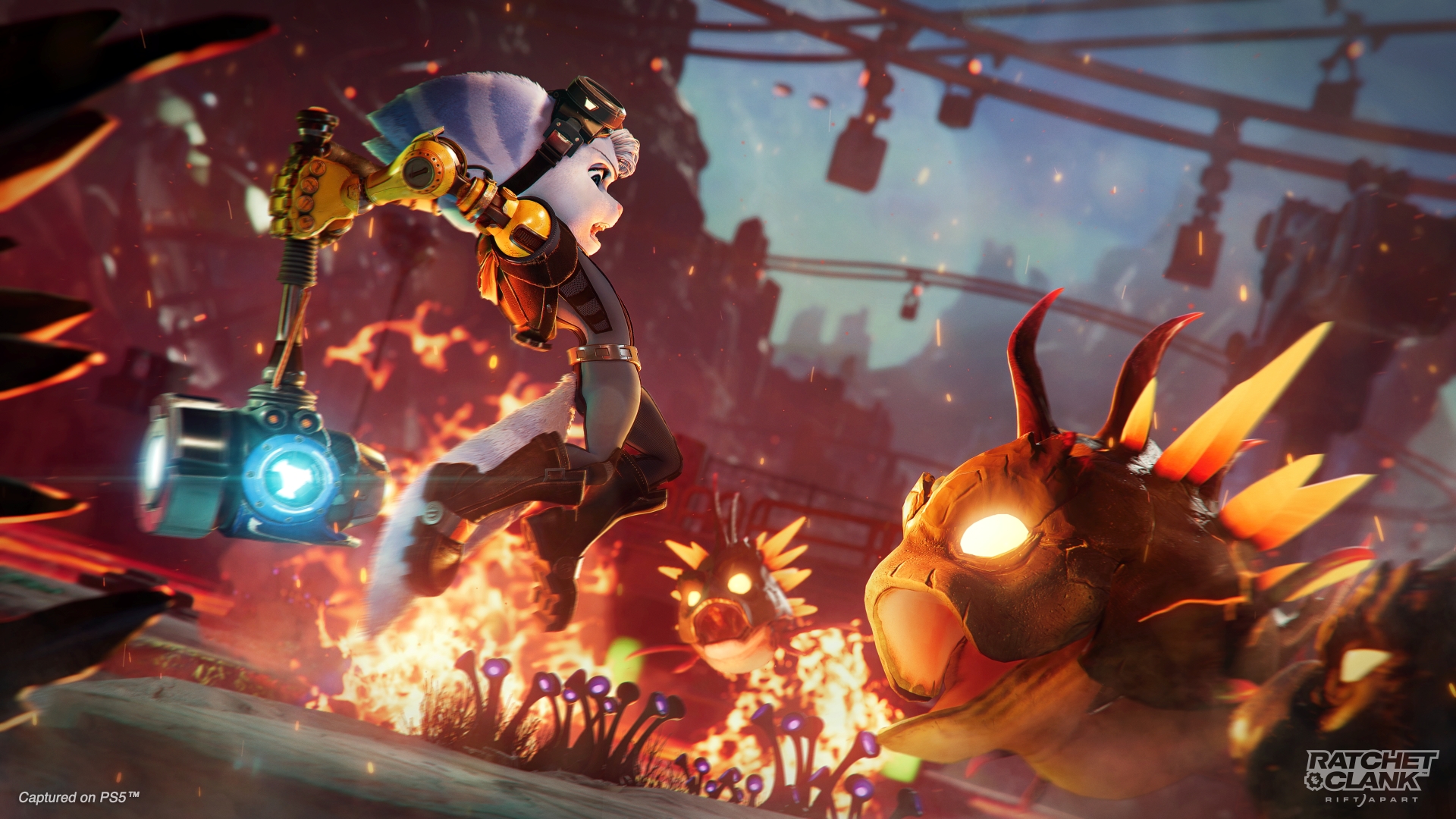 It is also good to remember that Rivet is not the first female Lombax to appear in the franchise. In Going Commando, we met Angela Cross, a lombax that has colors much closer to those of Ratchet but has a much more humanized body. While Rivet, it does the opposite. Its body structure is much more similar to that of the protagonist, however, it has purple hair with dark stripes. In fact, her biggest difference to Ratchet, besides color, is her bionic arm. After all, while Ratchet uses a wrench as a melee weapon, the girl uses a hammer.

Some conceptual arts in the game show that Rivet was also thought of in a color closer to the Lobaxes that we know, but that was changed in the final version. The plot of Rift Apart

The story begins at a kind of parade in honor of our heroes. At one point, Clank thanks Ratchet for years of partnership and adventures to save the galaxy. The little robot presents his friend with Dimensioner, a device that would allow the hero to jump between dimensions and find his family, something that Ratchet has always sought in his adventures.

However, before this beautiful moment came to pass, Dr. Nefarious invaded the party and stole the weapon, opening a portal in the sky and causing enormous destruction in the city. From here what we know is that at some point in history, Clank and Ratchet split up and the little robot ends up joining Rivet to defeat Nefarious and find his partner.

During the event we also spoke with Mike Daly, the game’s director, who said that as in all games in the series, we can expect a great replay factor mainly in the issue of weapons, which have always been a highlight in the franchise. One of the highlights that the director mentioned, was the fact that they all used Dualsense very well. They even use adaptive triggers to change the type of trigger, which is a very interesting addition.

The Enforcer, which looks a lot like a shotgun, also has two shooting modes, pressing halfway we have a single shot, while pressing the button until the end guarantees a double shot.

Other weapons, like the NegaTron, require that we first press the R2 button halfway to load the shot and then when pressing the rest of the button, we have a powerful shot in the style of Kame Hame-ha.

According to Mike, there are several weapons with different shooting modes and evolution, finishing the game just once will not be enough to level up the arsenal of the protagonists and in addition, there are two weapons that are only available after zeroing the game the first Therefore, according to him, the replay factor is guaranteed.

It is impossible to attest to anything just by watching videos or talking to producers. After all, how many times have we players been fooled by beautiful presentations, incredible trailers and fantastic events, have we? But talking to the producers, you could see their passion for making the game in each conceptual art, in the songs that are sensational, in the narrative, it is really exciting to see people so happy with the results of their work. 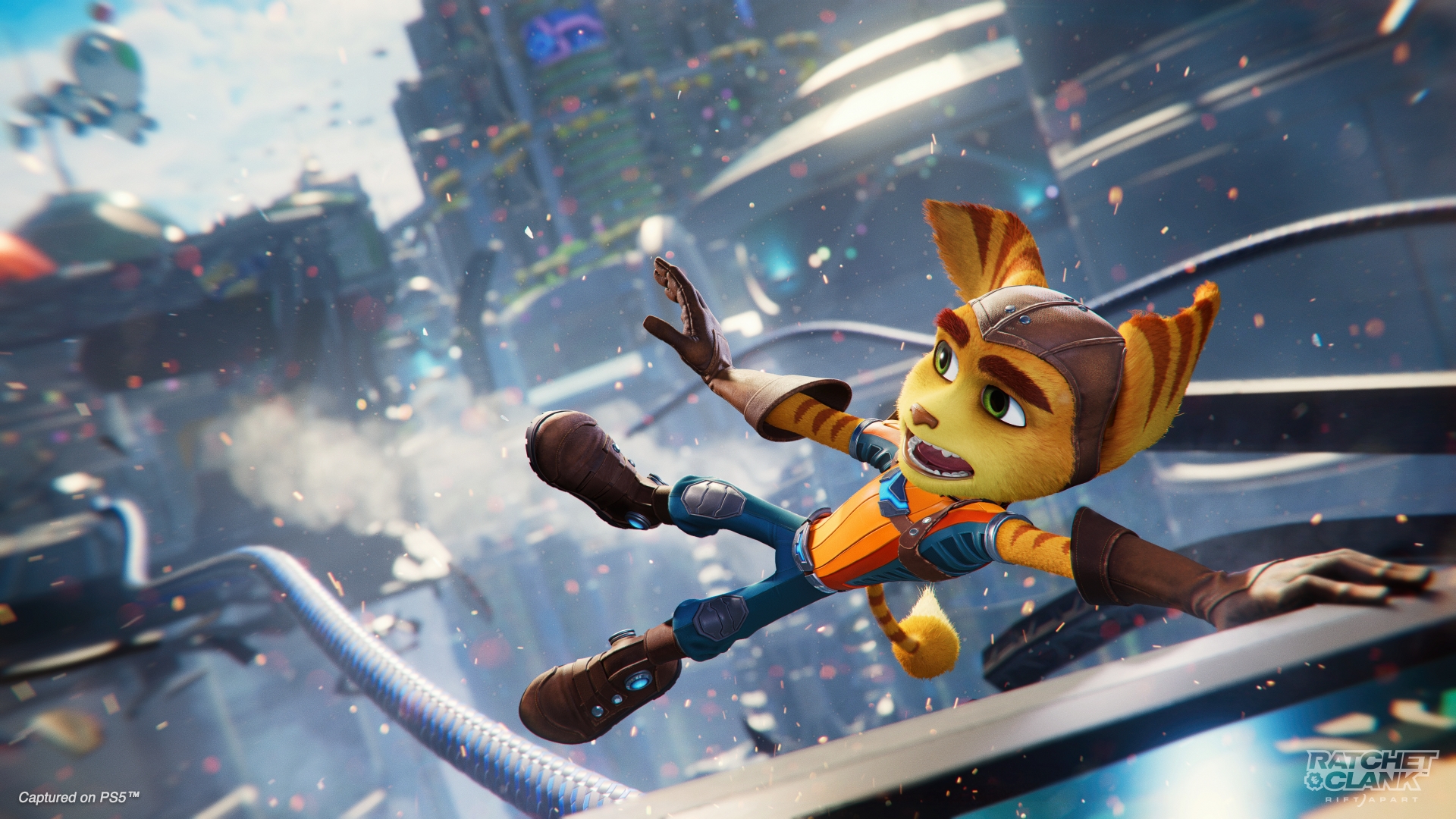 Unfortunately, using my monitor that is not 4K and doesn’t even have a very interesting hertz rate there, I couldn’t see the true potential of production. From the videos, everything seems to be very beautiful and extremely well detailed. Just like the ambience and the sound, but we have no way of saying to you at that moment, “it’s impeccable” or “it doesn’t work as well as it should”, because we want to test it with 3D audio technology and then look at you and say , Ratchet and Clank: Rift Apart is worth it or not.

I’m a big fan of the franchise, I played all the games since the original on the PS2, I find them extremely fun for all ages, with a great replay factor and I can’t wait to analyze this one, which excited me, which means I’m going to be very critical in the analysis, because I’m really expecting a Ratchet and Clank worthy of the new generation.