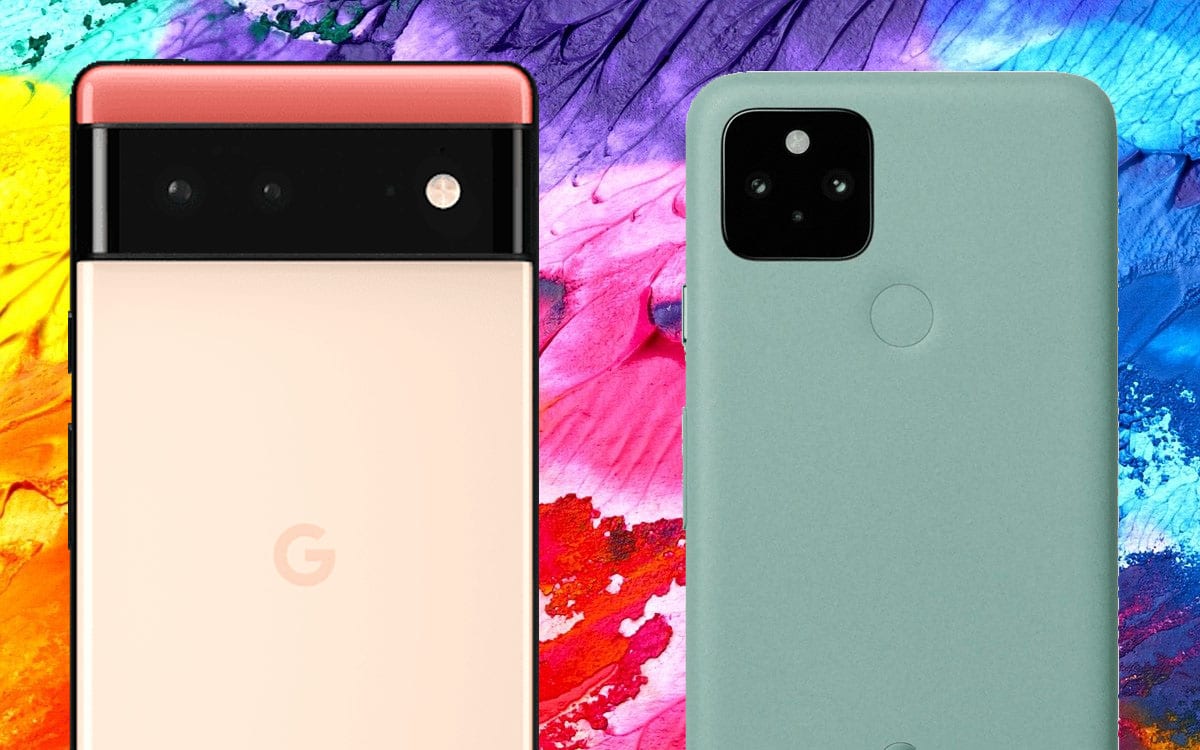 The Pixel 6 brings many changes compared to the Pixel 5. We have identified all the major differences between the two models of Google smartphone.

The official launch of the Google Pixel 6 took place on October 19, 2021. After a year of transition, the Mountain View firm is making a comeback in the smartphone market with this new generation. But this does not mean that the Pixel 5 becomes obsolete, the previous model still having many advantages. So which of the two to choose? What are the fundamental differences between the Pixel 6 and the Pixel 5? This comparison will help you see more clearly.

The technical sheets of Google Pixel 6 and Pixel 5

Here is a summary of the technical specifications of the two smartphones. We analyze these characteristics in more detail later in this article.

The Pixel 5’s screen is protected by Corning Gorilla Glass 6, while the Pixel 6’s is coated with a more efficient Gorilla Glass Victus. Both models benefit from a certification IP68 water and dust resistance.

Aesthetically, the Pixel 6 and Pixel 5 have nothing to do with it. Google has completely revised its copy and dares an original and unique design with its new reference. On the back, the photo block in style “Baking sheet” Pixel 5 is replaced on Pixel 6 by a horizontal configuration of sensors, integrated into a prominent band. In addition, Google has finally moved the fingerprint reader, on the back on the Pixel 5, under the screen for the Pixel 6, a much more convenient positioning for the user. And while the Pixel 5 played it monocolour, the Pixel 6 relies on the difference in tones with two different color spaces, separated by the wide black band.

With such a back, the Pixel stands out from a distance. But at the front we also see some changes. The punch that houses the front camera leaves the upper left corner of the panel to position itself in the axis, while the borders around the screen are slightly thinner.

Both panels are based on OLED technology. Fans of compact format will be delighted with the 6 inches of the Pixel 5, while the diagonal of 6.4-inch Pixel 6 will be preferred by users who desire a larger display. The latter sports a discreetly longer format with a 20: 9 ratio, against 19.5: 9 on the Pixel 5.

This is one of the points on which the Pixel 6 is eagerly awaited since for the first time, Google is equipping one of its devices with a “homemade” chip developed with the help of Samsung. This SoC, called Google Tensor, is engraved in a fineness of 5nm and should be both very efficient and energy efficient. Especially since we imagine that Google has optimized its Pixel 6 with the small onions to make the best use of the chip, given that it meets a specification imposed by the American group itself.

For its part, the Pixel 5 is content with a mid-range SoC from last year, the Snapdragon 765G 5G from Qualcomm, which obviously can’t compete with a high-end chip this year. The Pixel 5 runs very smoothly and can launch any Android of course, but it will make a difference, especially in the long run. Google communicates on Pixel 6 performance up to 80% better to those of the Pixel 5, while we generally see an increase of around 30% from one generation to the next.

When it comes to memory, Google offers the same amount of RAM (8 GB) and storage (128 GB), but the Pixel 6 enjoys more advanced technologies than the Pixel 5: LPDDR5 vs. LPDDR4 for RAM and UFS 3.1. versus UFS 2.1 for internal memory.

The Pixel 5 and Pixel 6 are of course both 5G compatible.

The Pixels have often been criticized for their very fair autonomy, Google has finally seized on the problem. Efforts were first made on the Pixel 5 and its battery with a capacity of 4080 mAh, the Pixel 6 goes even further with a battery of 4600 mAh, which coupled with the Tensor chip, should guarantee a comfortable autonomy, more than on the Pixel 5 in any case.

And wired charging becomes faster on the Pixel 6, capable of receiving a power of 30W, against only 18W for the Pixel 5. Thirty minutes is enough to charge the Pixel 6 from 0 to 50% despite the presence of a large drums. Wireless charging is also improving from one generation to the next, going from 12W to 21W from the Pixel 5 to the Pixel 6. But beware, only the new Pixel Stand can take advantage of these 21W, any other charging station being restricted to 12W with this mobile.

Google incorporates on the Pixel 6 a 50 MP Quad Bayer main sensor with Octa PD technology, which has a pixel width of 1.2 μm to capture light well and an aperture of f / 1.85. It replaces the optics of the Pixel 5, a 12.2 MP, f / 1.7 and 1.4 µm sensor. Optical stabilization and laser autofocus are available in both cases. Googling evokes the “Captures 150% more light” on the Pixel 6.

As a guide to what’s new compared to the Pixel 5 in the photo, the Pixel 6 offers an anti-blur feature to take pictures with clean faces even in difficult conditions. The Motion mode will improve the photos taken while moving, while Real Tone will highlight individuals in their photos, notably enhancing their skin. And with the magic eraser of Google Photos, it becomes possible to erase some unwanted background elements on a snapshot.

The Pixel 6 comes directly under Android 12, the brand new version of Google’s mobile operating system. The Pixel 5 natively ships Android 11, but should very soon switch to Android 12 through an update. Logically, the Pixel 6 will be supported a year longer than the Pixel 5 for annual feature updates and monthly security patches.

The Pixel 6 benefits from a few exclusives in terms of features. The Tensor chip enables machine learning capabilities to be increased tenfold, which is used, like on the latest iPhones, to learn how to use the smartphone by the user to adapt and improve autonomy. Coupled with software enhancements, the SoC also provides access to additional camera options and improves machine translation and speech recognition.

Finally, the Pixel 6 is even more secure than the Pixel 5 thanks to the combination of Google Tensor, the TITAN M2 security key and the software.

The Pixel 6 is available from 649 euros, with three months of YouTube Premium and Google One subscriptions offered. The pre-order (until October 27, 2021) also gives the right to a wireless noise canceling headset Bose 700. A really interesting offer and an attractive price-performance ratio, which we did not necessarily expect with Google on the smartphone market.

The Pixel 5 meanwhile is no longer officially marketed on the Google Store, but it is still possible to acquire it from resellers. At its exit price of 629 euros, it is clearly not worth it against the Pixel 6. But if you manage to get it at a reduced price, it could be a good deal as the smartphone still has so much to give.