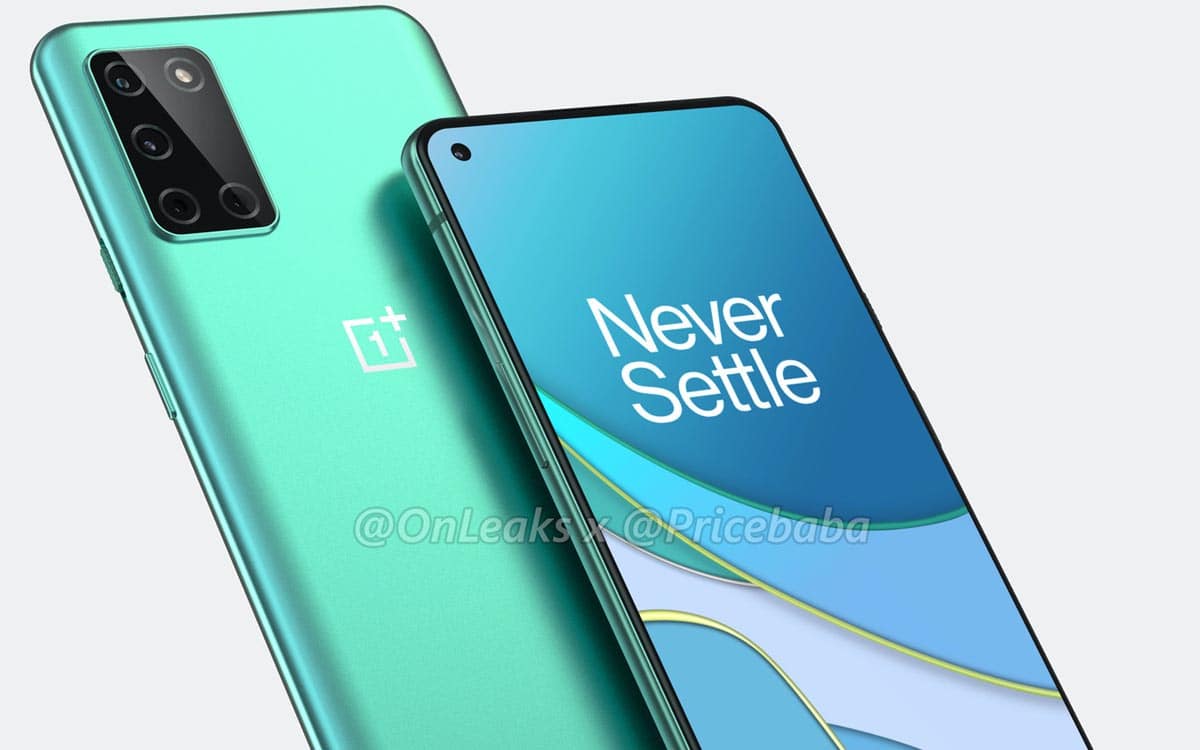 The OnePlus 8T follows on from the OnePlus 8 and OnePlus 8 Pro. If it is equipped with data sheet elements from these two smartphones, a change of design, a new ultra powerful wired charging and native Android 11 still make it a separate device.

After having returned to the mid-range and value for money with the very good OnePlus North, OnePlus is once again turning to the high end with its next upcoming flagship: the OnePlus 8T. If the brand has so far been discreet about this smartphone model, several reliable leaks already give us a good overview of what the device will look like, both from the point of view of design and technical specifications.

📆 When is the OnePlus 8T released?

It has become a habit since the OnePlus 3 series, the Chinese manufacturer is launching a “T” version of its smartphones in October-November, about six months after their predecessors which come out in the April-May period. Last year, the OnePlus 7T got a bit ahead of the schedule with a presentation starting in September. It shouldn’t be repeated this time around. The brand has not yet communicated any announcement date, which is not expected until October.

It is possible that we will have to wait longer, November, or even December, to see the OnePlus 8T land on the market. The COVID-19 epidemic has strongly impacted the production of smartphone components. Apple has been forced to postpone the release of its iPhone 12 for several weeks, even though we are obviously not talking about the same volume of units at all. Another clue that lets us think that the OnePlus 8T will be delayed a little longer than expected, OnePlus normally teases its future mobiles well in advance of their proper presentation: messages on social networks, blog notes focused on features on the brand’s forum … However, so far, the manufacturer remains silent.

💰 What is the price of the OnePlus 8T?

Based on OnePlus’ pricing strategy in recent years, the OnePlus 8T should be sold at the same price or a little more than the OnePlus 8 when it was released, which was marketed from 699 euros. The variant better equipped in memory could cost around 100 euros extra. It should still remain cheaper than the OnePlus 8 Pro, whose premium price of 899 euros must have cooled more than one consumer, even within the OnePlus community.

There would be no OnePlus 8T Pro planned, at least not for the moment. It is not known if this one will be launched later or if it will never see the light of day. OnePlus may have considered it needed time to relaunch itself in the very high-end market after the mixed reception given to the OnePlus 8 Pro 5G.

📱 What design for the OnePlus 8T?

Very precise renderings of the OnePlus 8T were made by the Indian site Pricebaba, which relied on information from the French leaker Steve Hemmerstoffer, better known as OnLeaks. The latter can boast of having revealed dozens and dozens of correct leaks in recent years. We owe him recently the characteristics and the release date of the OnePlus 7T and 7T Pro. Suffice to say that his reports are reliable. 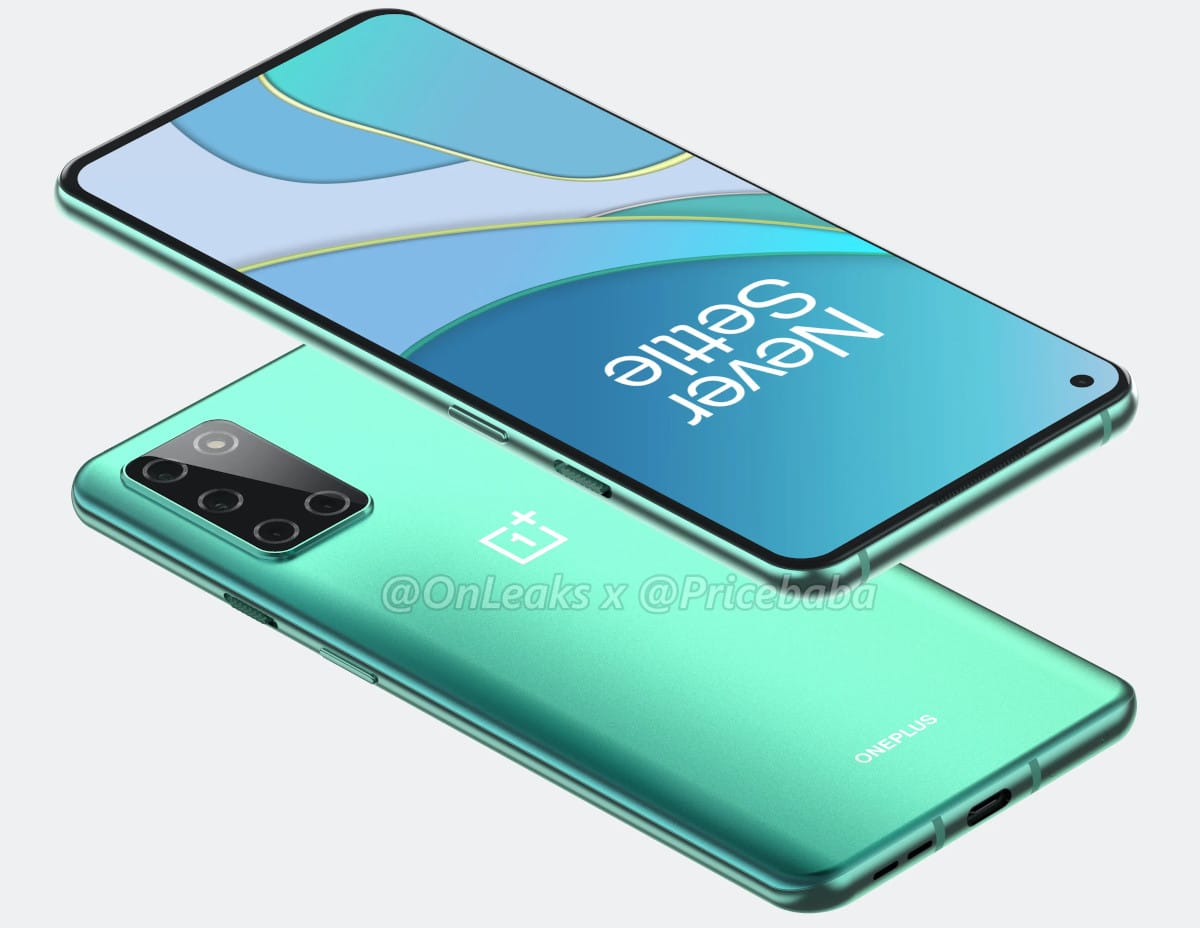 We learn that the OnePlus 8T is equipped with a flat panel, unlike the curved screen of the OnePlus 8, whose upper left corner houses the front photo sensor. On the back, OnePlus follows the trend. The manufacturer has long trusted its setup with three photo sensors aligned vertically in the center of the smartphone, it goes to the hob in the left corner as we see everywhere now. Which makes the OnePlus 8T quite unoriginal in the end.

In terms of materials, we should find an aluminum frame and a glass back, while plastic is beginning to reinvigorate itself on the high end of some competitors to reduce costs. Gorilla Glass 5 protection is expected on the front and back of the device. The OnePlus 8 did not have a water and dust resistance certification, while the OnePlus 8 Pro was IP68 certified. We do not yet know what is for the OnePlus 8T.

Unsurprisingly, the smartphone has a fingerprint reader under the screen, a USB-C 3.1 port for charging and is deprived of a 3.5mm jack port for audio.

🔲 What is the screen of the OnePlus 8T?

The panel incorporates many characteristics of that present on the OnePlus 8, namely: AMOLED technology, 6.55-inch diagonal, FHD + 1080p definition, HDR10 + compatibility and 20: 9 ratio. The OnePlus 8T still benefits from one of the features of the OnePlus 8 Pro with a refresh rate of up to 120 Hz, against 90 Hz on the OnePlus 8. 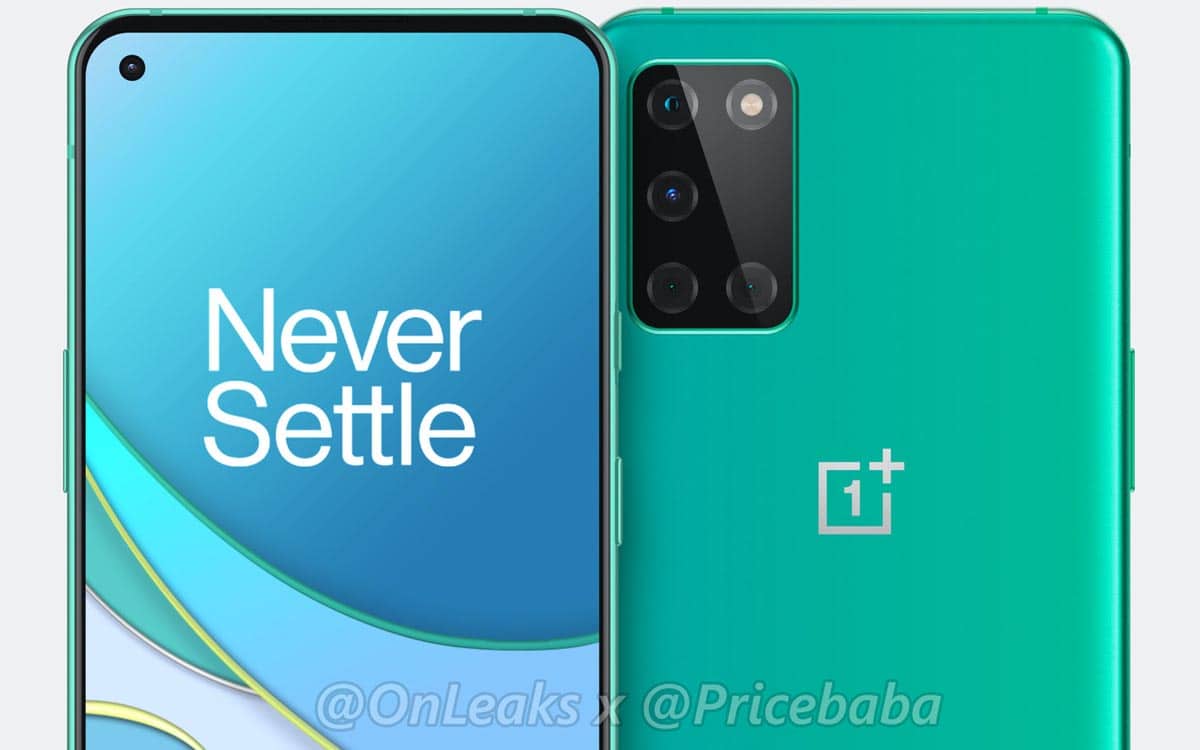 🛠 How does the OnePlus 8T perform?

According to information obtained by OnLeaks, the OnePlus 8T is powered by a Snapdragon 865, Qualcomm’s high-end chip engraved in 7nm +. The brand therefore skips the Snapdragon 865+, a revised and improved version of the SoC. The only thing left is that this chip is very fast and powerful and offers high performance. And we know that OnePlus attaches particular importance to the optimization of its smartphones, this OnePlus 8T should particularly well take advantage of the potential of the Snapdragon 865.

The OnePlus 8T is 5G compatible. As a reminder, the auction launch for 5G frequency bands is scheduled for September 29, 2020 in France. Once the allocation is complete, operators will be able to launch their commercial offers. Some expensive packages should integrate 5G at no additional cost, based on the strategy adopted by other European operators present in countries where 5G is already a reality.

🔋 Does the OnePlus 8T have good battery life?

With its battery of 4500 mAh, the OnePlus 8T should offer good battery life despite the 120 Hz screen. We can only be satisfied with the fact that OnePlus has increased the capacity of it compared to the OnePlus 8 to get closer to what we had on the OnePlus 8 Pro.

The smartphone would be compatible with a 65W overpowered wired charging, performance far superior to those of the Warp Charge 30W present on the original 8 series. What to raise the battery of the mobile in no time if this data is confirmed.

For now, there is no indication that the OnePlus 8T will support wireless charging. A technology that OnePlus has long shunned before incorporating it into the OnePlus 8 Pro, but which raises the manufacturing price of the device and therefore the selling price. Such an absence could be justified without a price increase compared to the OnePlus 8T and with 65W wired charging.

📸 Is the OnePlus 8T good in photos?

As usual, we will have to have the smartphone in hand and do a test to judge the capabilities of the OnePlus 8T in the photo. OnePlus promises with each new iteration photo quality at the level of the best flagships on the market, targeting Samsung and Huawei in particular. But each time, the result does not live up to the high expectations, while remaining quite adequate. But even on the OnePlus 8 Pro, photos in low light conditions were disappointing. We hope that OnePlus has managed to improve its software (the problem does not come from the hardware) so that we can finally take pictures worthy of a high-end smartphone. Note that a trick allows you to install the Pixel GCam on the OnePlus, and that it sometimes gives better results with the main photo sensor. On the other hand, it does not manage the additional modules. 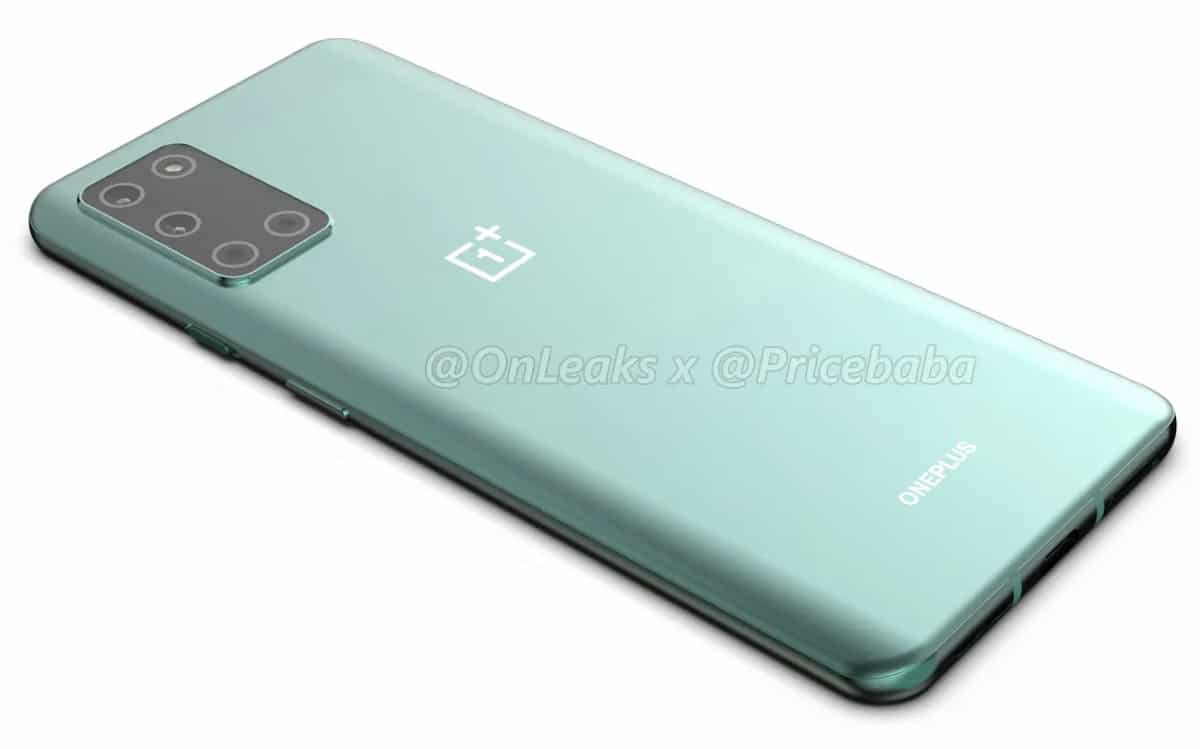 Until a OnePlus 8T arrives at the editorial office so that we get a clear idea of ​​its photo capabilities, we will have to be satisfied with technical specifications. It is a configuration with four sensors that awaits us on this model, of which the 48 MP main module, f / 1.8 aperture, 25mm, with omnidirectional phase detection autofocus, laser autofocus and optical image stabilization (OIS). It is supported by a 16 MP, f / 2.2, 14mm ultra-wide-angle sensor, a 5 MP, f / 2.4 macro module and a 2 MP, f / 2.4 depth sensor. Either the same ultra wide-angle and macro as on the OnePlus 8. Still no telephoto lens for the zooms, which will therefore be only digital. On the front, the 32 MP selfie camera is used for selfies, facial recognition and video calls.

🔎 Which version of Android is on the OnePlus 8T?

OnePlus is very responsive when it comes to updates. The stable version of Android 11 has already been deployed, it is certain that the OnePlus 8T will ship it natively at its launch. This update brings several new features including an interface dedicated to connected objects, notification bubbles for messaging applications, Android updates via the Play Store, universal playback controls in the Quick Settings panel or a new section for conversations in the action center.

OnePlus has not yet communicated all of the features that arrive with its overlay OxygenOS 11. There will undoubtedly be some directly related to the new features of Android 11, but also additional options. Also knowing that features natively integrated into Android 11 were already present on the current versions of OxygenOS. 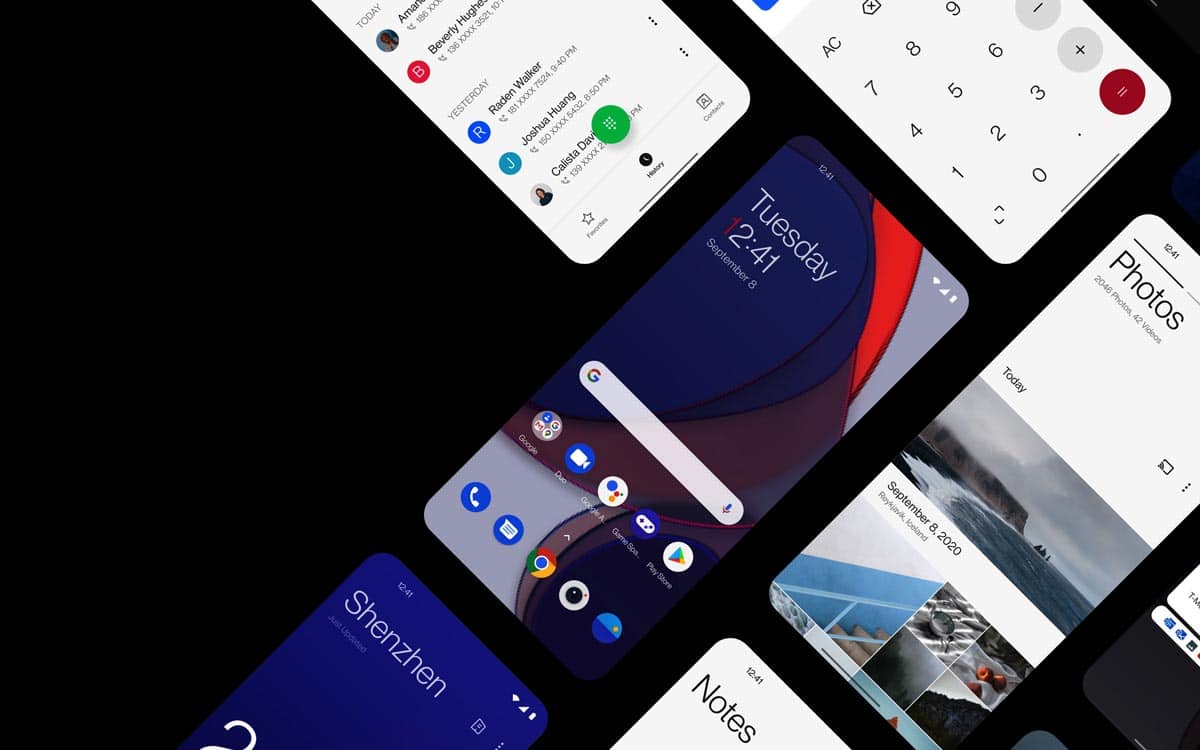 OxygenOS 11 is currently in beta on smartphones of the OnePlus 8 series. On the program, a more accessible interface for one-handed use of the smartphone, a major ergonomic issue while the size of the screens continues to grow. to increase. Here, the touch controls are closer to the thumbs, making it easier to reach them. A wider choice of Always-on Display option, this option to display information such as the time, battery level or incoming notifications on an off OLED screen, is available. And of course, OxygenOS 11 is even faster and smoother than previous versions.

OnePlus has committed to offering two major feature updates on its smartphones, that is, the OnePlus 8T will be upgraded to Android 12 and 13 when these become available. The brand’s mobiles also receive security patches for three years.

The OxygenOS interface is considered one of the best in the Android ecosystem in many respects: UI design, features, speed, fluidity, consistency… It is also thanks to it that OnePlus benefits from such an aura in Europe. Software is an essential component on a mobile, it is not about buying a technical sheet, but a satisfactory user experience.