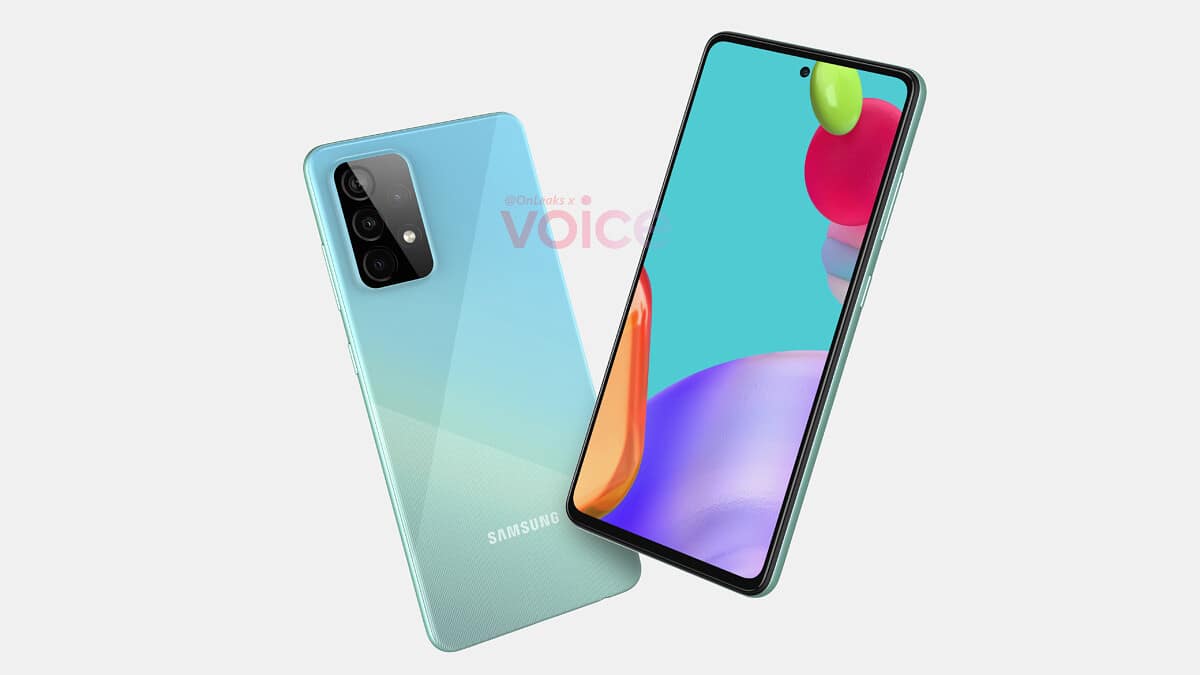 The Galaxy A52 is about to be launched by Samsung, which will deliver a batch of mid-range smartphones soon. The Galaxy A52 presents itself as a slightly more compact alternative to the Galaxy A72, which it still looks a lot like.

Samsung has bet on the high end with the Galaxy S21 series to start the year 2021, the South Korean manufacturer will follow up with the upcoming release of mid-range mobiles, the devices it sells the most in the international. We will have a Galaxy A72, but also a Galaxy A52, which looks like it in several ways but adopts a more compact format. Here is everything we know so far about the Samsung Galaxy A52.

When is the Galaxy A52 released?

The Galaxy A52 release window would be held in the second half of the month of March 2021. It could be presented at the same time as the Galaxy A72.

What is the price of the Galaxy A52?

The German media WinFuture, always very well informed, ensures that the price in euros of the Galaxy A52 is fixed at 349 euros, with arguably more generous and more expensive memory configurations. The smartphone should be accompanied by a Galaxy A52 5G, which would be marketed at a price of 429 euros.

What is the technical sheet of the Galaxy A52?

The technical specifications of the Galaxy A52 have been widely leaked through several sources. Of course, there is a possibility that these characteristics will evolve until the officialization of the smartphone by Samsung.

What design for the Galaxy A52?

The Galaxy A52 adopts the same design as the Galaxy A72. The front camera is integrated into the screen via a central punch and the fingerprint reader is positioned under the slab. Borders surround the screen, the lower one being a little thicker than the others, which allows Samsung to offer a 3.5mm jack port for audio. The smartphone would be certified IP67 water and dust resistant.

The smartphone has a plastic back, an aluminum frame, and will be available in four colors: black, white, blue and lavender. The photo block is positioned in the upper left corner and consists of four sensors and the LED Flash.

What is the screen size of the Galaxy A52?

This is one of the main differences of the Galaxy A52 with the Galaxy A72, it is equipped with a screen with a diagonal of 6.5 inch, against 6.7 inches for the big brother. Otherwise, the same Super AMOLED technology is present, with Full HD + 2400 x 1080 pixels definition. To date, we have no precise information on how often the panel is refreshed. A priori, the Galaxy A52 4G would rely on a 60 Hz screen, while the Galaxy A52 5G could be entitled to greater fluidity, 90 or 120 Hz. This last point should be taken with a grain of salt.

How does the Galaxy A52 perform?

Again, Samsung would opt for the same strategy for the A72 and A52, namely the presence of a mid-range SoC Snapdragon 720G for 4G model and a chip Snapdragon 750G faster and 5G compatible for the Galaxy A52 5G. This is not necessarily very generous on the part of Samsung, these SoCs can be considered in the low range of Qualcomm’s mid-range chips.

The Galaxy A52 4G and 5G would both be entitled to two configurations, one with 6 GB of RAM and 120 GB of storage space, the other with 8 GB of RAM and 256 GB of internal memory. Depending on the market, not all variants may be available. But good news, each of them would offer a micro SD card slot to expand the storage of the device.

What autonomy for the Galaxy A52?

The smartphone has a 4500 mAh battery that is a little smaller than that of the Galaxy A72. This should be felt on the autonomy, but it is still a more than honorable ability. If the refresh rate is higher as expected on the A52 5G, this feature will inevitably result in energy consumption.

The Galaxy A52 supports 25W wired charging, but Samsung would only provide a 15W charger in the box. Unlike the Galaxy S21, there is at least one here provided with the purchase of the mobile, but it is a shame to have to get another charger to take advantage of the full charging potential of the smartphone. Not surprisingly, no wireless charging on this model.

Is the Galaxy A52 good in photos?

It is a quadruple sensor which is in charge of the photo and video part of the Galaxy A52. The main 64 MP module would be associated with an 8 MP ultra wide-angle and two other 5 MP and 2 MP sensors, the first being undoubtedly a macro lens and the second a sensor dedicated to the calculation of the depth of field. .

The 32 MP front camera will be in charge of selfies as well as facial recognition if you prefer this biometric feature for fingerprint authentication.

What is the Android version of the Galaxy A52?

The smartphone is beautiful being a mid-range, it will benefit from all the software innovations introduced by Samsung with its Galaxy S21. The Galaxy A52 is thus launched directly under the One UI 3.1 update, the latest version of the manufacturer’s in-house overlay based on Android 11.

The Galaxy A52 therefore benefits from the many new features brought by One UI 3.0 as well as from the few additions that have appeared with the minor update One UI 3.1, including a mode allowing you to film at the same time with the main camera and the camera. front or the possibility of removing an object from a photo.