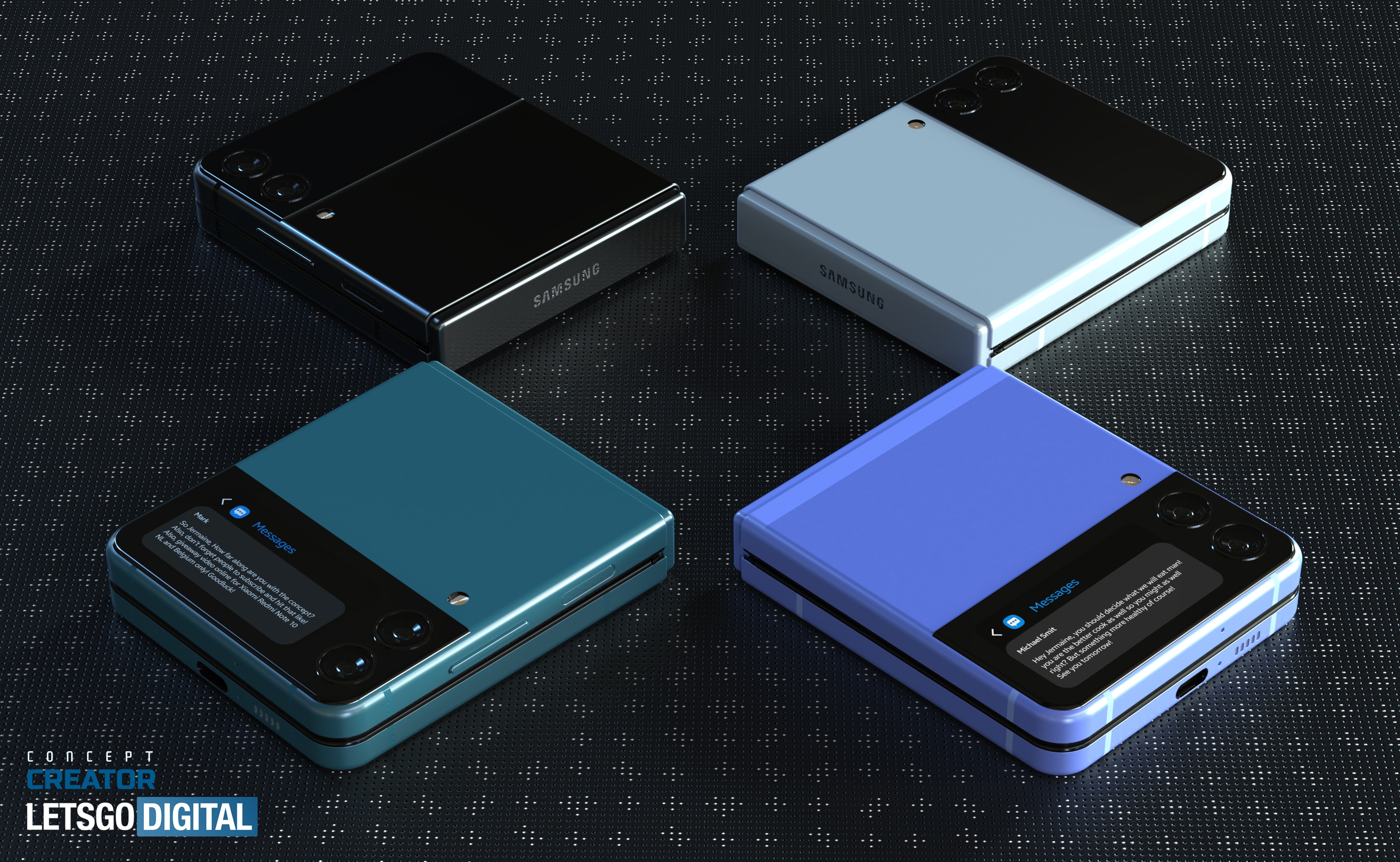 The Galaxy Z Flip 3 is about to be announced by Samsung. Expected price and release date, technical sheet, design, improvements … Discover everything we already know about the folding smartphone.

Samsung has resurrected the flip phone design with the foldable screen of its Galaxy Z Flip. The new model, the Z Flip 3, will be announced by the brand shortly. But we already know a lot about the smartphone through various leaks that tell us more about the characteristics of this device.

In early 2020, Samsung released the Galaxy Z Flip, its second foldable screen smartphone, sporting a different design than the Fold with a hinge system reminiscent of old flip phones. This year, the South Korean manufacturer will launch its successor, the Galaxy Z Flip 3. Because yes, according to several sources, there will be no Galaxy Z Flip 2 and we should go directly to 3.

This decision was arguably taken so that the Z Flip would catch up with the Z Fold in Samsung’s nomenclature and that consumers would not think that the new Z Flip was a generation behind the Z Fold 3. Thus, it is the Z Flip 5G which will be considered the Z Flip 2.

📅 When is the Samsung Galaxy Z Flip 3 released?

At first, we thought that the Galaxy Z Flip 3 would be revealed by Samsung during the month of July along with the new model of the brand’s other line of foldable screen smartphones: the Galaxy Z Fold 3. Finally, Both devices are expected to be presented alongside the Galaxy S21 Fan Edition in August at a new Unpacked conference. As a reminder, Samsung is abandoning its Note range from this year, leaving the choice to users wanting an ultra premium smartphone between a folding mobile or a Galaxy S Ultra compatible with the S-Pen stylus.

According to South Korean media Yonhap News, the Galaxy Z Fold 3 is expected to launch between early and mid-August for marketing towards the end of that same month. The Tron leaker is counting on the date of August 3, 2021. 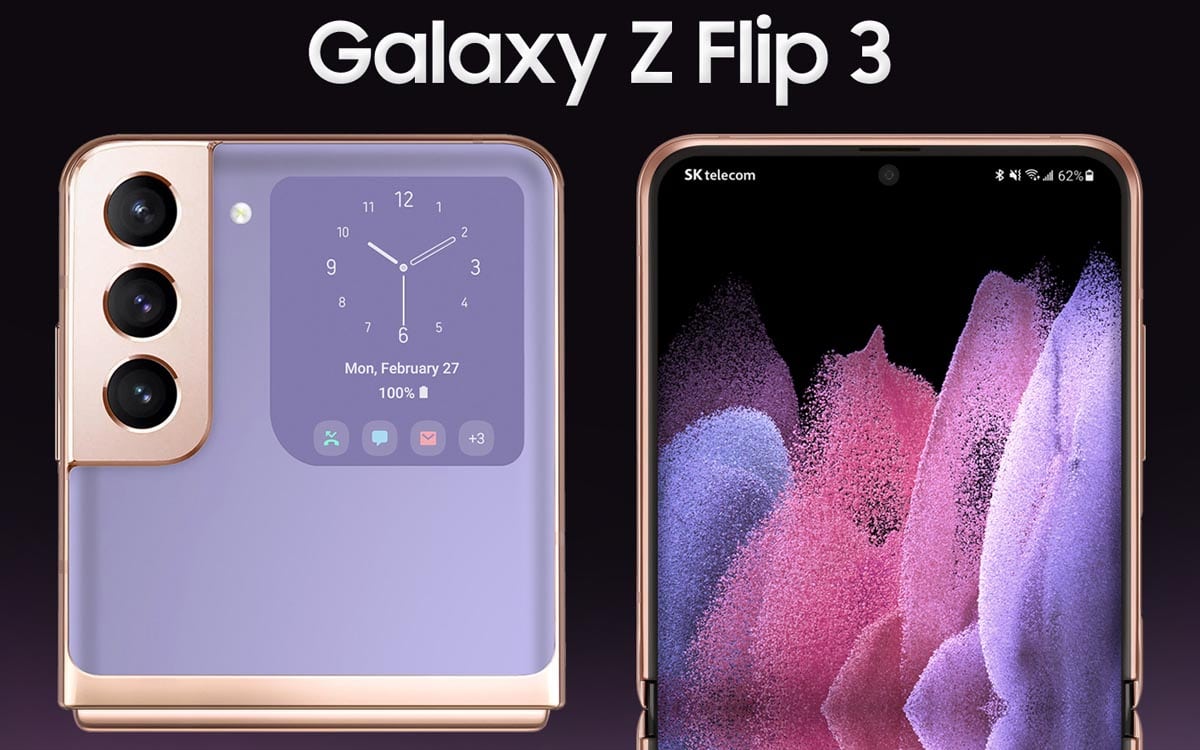 💰 What will the price of the Samsung Galaxy Z Flip 3 be?

The Galaxy Z Flip was sold very expensive when it was released in France with a posted price of 1500 euros. A very high price despite a rather average technical sheet which was explained by the adoption of a new technology, necessarily much more expensive to develop and even to produce with few economies of scale and adapted production lines.

The Galaxy Z Flip 3 should be cheaper than its predecessor. The Tron leaker indicates that the smartphone would be sold between 999 and 1099 dollars, against 1,449 dollars for the 2020 model. But it remains to be seen how Samsung will choose its pricing in Europe and more particularly in France. The manufacturer had not passed on all the taxes on the final price of its first Z Flip with us, it could decide not to repeat the initiative on the second generation of the range. In other words, this reduction in prices in dollars in the United States could not be as significant in France in euros.

The Galaxy Z Flip 3 retains the identity of the range with a horizontal fold on the screen allowing the smartphone to be folded vertically and only inwards, to close it like a flap. A patent filed by Samsung may suggest that the Z Flip 3’s chassis will be more solid, with the switch to what the brand calls an “Armor Frame”, which arguably abandons aluminum, a not so strong and heavy material for. do nothing.

The durability of folding smartphones remains to be proven in the eyes of consumers, and it is logical that Samsung should give itself the means to reassure the public in this regard. Moreover, with this “Armor Frame”, it is not impossible that the Z Flip 3 benefits from a certification of water and dust resistance, which we didn’t expect to get so soon on a smartphone equipped with such a hinge.

A video showing 3D renderings of the Galaxy Z Flip 3 gives us an overview of the design of the device. The images were created by Jermaine Smit from information from leaked documents, they do not go out of the artist’s imagination. There is a punched screen housing the front photo sensor, as well as flat edges, while they were much more round on the Z Flip. The hinge seems better integrated into the whole, with a reduced space when the mobile is in the folded position.

At the rear, the double photo sensor and the LED Flash, positioned vertically, are integrated next to a secondary screen much larger than that of the first model. Aesthetically, Samsung plays on the colors with a two-tone design: an upper black part, on about 1/6 of the surface, and the rest in another color: white, beige, green or purple. All with a matte appearance, while the original Z Flip sports a glossy finish. Finally, the fingerprint reader should find a place on the start button, like on the first Z Flip.

If we are to believe Wondering Leaks, the foldable panel of the Galaxy Z Fold 3 is based on AMOLED technology and a diagonal of 6.7 inches. It would be a LTPO screen (low-temperature polycrystalline oxide thin-film transistor) capable of automatically adjusting the refresh rate according to needs and use in order to preserve the battery. For example, no need for a 60 Hz display to watch video at 24 or 30 frames per second. The presence of an LTPO panel suggests a refresh rate that could go up to 120 Hz. The screen would be protected by a Gorilla Glass Victus glass protection from Corning.

Thesecondary screen, external and accessible even when the smartphone is closed, improves with this version. Called “front screen” or “cover screen” by Samsung, it allows you to quickly consult notifications and answer calls without unfolding the smartphone. It also displays notifications in the manner of the Always-on display function so that you can always have an idea of ​​what you have been missing since the last opening of the device. This screen is also used to take photos quickly without unfolding the Galaxy Z Flip and to obtain a double preview when taking a photo. The Galaxy Z Flip 3’s cover screen should improve and grow, going to two inches instead of 1.1 inches and allowing, among other things, to read a whole notification on it.

The Galaxy Z Flip 3 spec sheet has been partially revealed by Wondering Leaks. According to him, the smartphone will be compatible with the latest wireless connectivity standards, WiFi 6 and Bluetooth 5.2. It could be equipped with a Snapdragon 888 SoC from Qualcomm, but this information should be taken with a grain of salt. If the Z Flip 5G did embed the most powerful chip available when it was released, namely the Snapdragon 865+, the original Z Flip was equipped with a Snapdragon 855+ SoC from the previous year in order to save money. And previous rumors hinted that the Z Flip 3 wouldn’t support 5G. However, the Snapdragon 888 integrates a 5G modem.

The foldable screen smartphone would be offered in two storage configurations: 128 and 256 GB, with 8 GB of RAM.

The autonomy of the Galaxy Z Flip 3 would be entrusted to a battery of 3700 mAh. The battery therefore gains in capacity compared to the previous generation which displayed only 3700 mAh, which did little to power such a large screen. The device would benefit from fast wired charging of 25W instead of 15W, as well as compatibility with the Qi wireless charging protocol. The charger supplied with the mobile would on the other hand only support a power of 15W according to the document of a Chinese certification body.

The elements made available by the various leaks around the product differ on the question of the camera. Some sources claim that a return of the setup to two 12 MP modules is planned, while others are counting on the integration of a triple sensor. The latter would then be composed of a 64 MP telephoto lens in addition to the 12 MP wide-angle main camera and 12 MP ultra-wide-angle sensor as well.

🖊 Is the Galaxy Z Flip 3 compatible with an S-Pen?

The Dutch media Let’s Go Digital spotted a patent filed by Samsung in which mention is made of support for the stylus by a Galaxy Z Flip. We can therefore expect that the next model in the range supports S-Pen, especially since there will be no Galaxy Note this year, which is historically the range of Samsung providing this feature.

The Galaxy Z Flip 3 is expected to launch under a brand new version of Samsung’s in-house overlay: One UI 3.5, based on Android 11. We do not yet know what this update brings to the interface from Samsung, which is currently at version One UI 3.1 since the launch of the Galaxy S21.

The Z Flip 3 in particular should benefit from a Flex Mode redesigned. This feature makes it possible to display one application on the upper part of the screen and another on the lower part, and to use both at the same time. The Flex Mode should return with an increased number of compatible applications and an optimization of its operation.