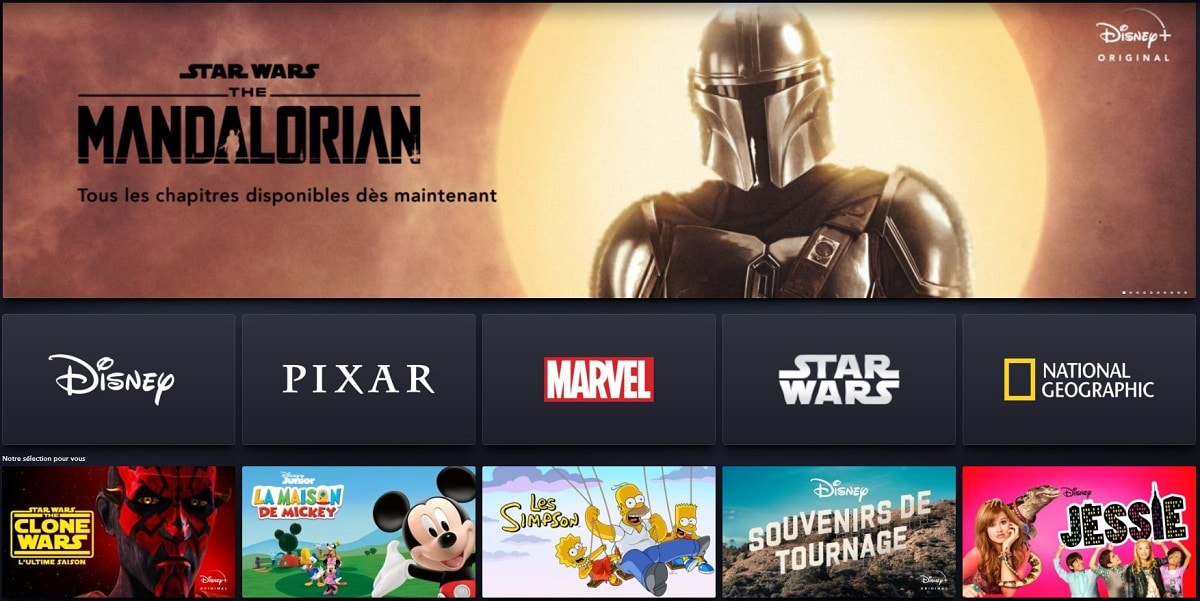 Disney + has been available in France since April 7, 2020 for a price of 6.99 euros per month. Disney, Pixar, Marvel, Star Wars and National Geographic documentaries and films are available in the catalog. We take stock of the launch date and time, the price of the subscription, the content offered and the compatible devices.

After months of waiting and a launch in November 2019 in the United States and in a few countries, such as the Netherlands, the Disney + service has been available in France since April 7, 2020. Initially, the platform was to be available on March 24 2020, but the American giant has decided to postpone the release of Disney + at the request of the French government. The Coronavirus and teleworking in France got the better of the SVoD + service, but temporarily, since there was ultimately only 14 days between the date originally planned and the final release date. If you live in Belgium, you will have to wait until September 2020 to subscribe. The platform will indeed land on September 15, 2020 in Belgium, as well as in Luxembourg and Portugal.

How much does the price of the Disney + subscription cost?

The streaming service is priced at € 6.99 per month or € 69.99 for one year (i.e. a price of € 5.83 per month reported over 12 months), whether on the web, on smartphones, tablets or OTT. It’s a euro cheaper than the subscription Essential its rival Netflix, which does not have 4K and 4 screens simultaneously. Because of the containment due to the Coronavirus pandemic, Disney was forced to restrict the broadcasting of its programs to 1080p in France. But everything ended up being in order: since July 8, 2020, Disney + has been broadcasting its programs in 4K, Dolby Vision and Dobly Atmos.

It is more profitable to subscribe to Disney + for 1 year at the price of 69.99 € (that’s about 5.83 € per month), but the payment must be done in one go. Or, you can choose the plan at € 6.99 for a month without obligation: in this case, you can cancel your subscription at any time without charge. Note also that Disney + has ended the 7-day trial offer. Therefore, it is no longer possible to test the service before subscribing to it.

Disney + and Canal + have announced an exclusive partnership for the distribution of the on-demand streaming platform on television, internet and satellite boxes. Thus, Disney + joins Netflix and OCS in the Ciné Séries bouquet, and is therefore available as part of a single subscription to several platforms. There are 5 possible subscription formulas:

You should know that subscribers to the Intégrale, Intégrale + offers and the Ciné Séries pack have free access to Disney +. Those who have subscribed to the Family packs can also enjoy Disney + for free for 1 year, but beyond that, they will have to pay the sum of € 6.99 / month (classic subscription).

Finally, we recently learned that Disney +, like other streaming platforms, is in the sights of the CSA. The council which will soon merge with Hadopi to give the Arcom will regulate these platforms as are currently the TV channels. Disney will henceforth have to participate in the financing of French cinema and will have to acquire 30% of European productions.

Read also : Netflix vs Disney + comparison, which is the best service for movies and series?

What movies, series and cartoons are available on Disney +?

On the catalog side, Disney + can count on its franchises Disney, Pixar, Marvel, Star Wars and on contents of National Geographic. Avatar (thanks to the takeover of 21st Century Fox), Snow Queen, all Simpsons, The Lion King and many others are thus offered on the platform. The list of films, series and cartoons available is known, but it is far too long to offer it here (it is 22 pages). Below we have focused on the Marvel and Star Wars movies and series, but if you want to check out the full Disney + lineup, you need to take a look at the platform’s official site. And do not hesitate to consult frequently our selections devoted to the new Disney + of the weekend and those of the current month. 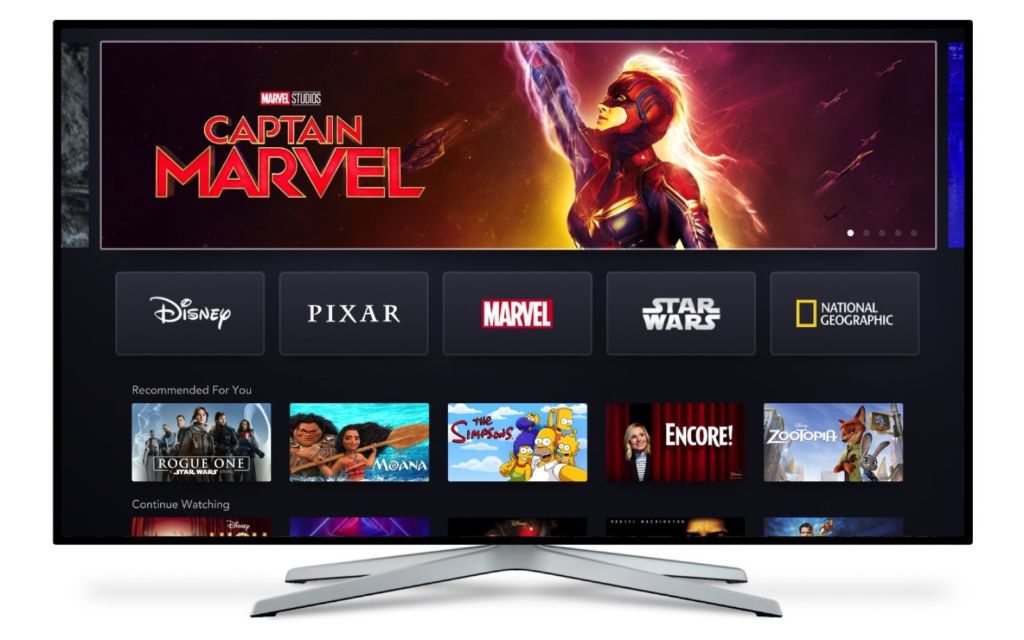 The programs are not all integrated from the release date of Disney +, but they will be added gradually until the end of 2020. Hulu content will not be part of it, because Disney wants to differentiate the two offers.

Warning : Not all Marvel Cinematic Universe movies are available at Disney + launch. To find out which ones and watch them in the right order, we invite you to discover the chronological order of the Marvel films here.

Disney + is also arriving with exclusives: around ten original feature films are already in the boxes. From launch, subscribers can watch the series The Mandalorian from director Jon Favreau (Iron Man, The Jungle Book), which takes place in the Star Wars universe. To celebrate the launch of Disney + in France, episode 1 of The Mandalorian was broadcast for free on Tuesday April 7, 2020 in the evening on Canal +, C8 and CStar.

In total, more than 7,500 serial episodes and 500 films are announced on the platform. Certain films and series are nevertheless censored or edited. On the other hand, following licensing agreements with competitors, certain films may be withdrawn from the catalog, as has been the case in the United States. Feature films like What a dog’s life! (1959), Garfield 2 (2006), Pirate of the Caribbean, Dr. Doolittle, or Mom I missed the plane! (1990) and Mom, I missed the plane again! (1992) are no longer available.

As Internet users notice, it should also be noted that the versions of films available on Disney + may have been a little censored when they show scenes of nudity, in particular.

What devices can I watch Disney + on?

Disney + is primarily accessible from any type of browser: Chrome, Firefox, Edge, Opera or Safari are all compatible with the streaming platform. The service is also available on Samsung SmartTV, smartphones, tablets, computers, Roku, Fire TV and two consoles: the Xbox One and the PS4. In addition, the platform is compatible with Google Chromecast and Android TV. To summarize, here is the list of compatible devices at Disney +:

To take advantage of the service as quickly as possible, we recommend that you read our tutorial to install Disney + on all your devices. However, and unlike Netflix, Internet boxes are largely absent from equipment compatible with Disney +. Impossible to access the platform from SFR, Bouygues, Orange or Free players, since none of these ISPs offer a Disney + application.

Except in one particular case: Disney + has entered into an exclusive contract with Canal +. By subscribing to the Intégrale, Intégrale + and Ciné Séries offers, you can access Disney + from your Internet box. Finally, note that the service could soon land on Liveboxes via a dedicated application. Orange and Disney + are indeed on the verge of reaching an agreement. According to the magazine Challenges, the partnership would be signed “in the coming weeks”. 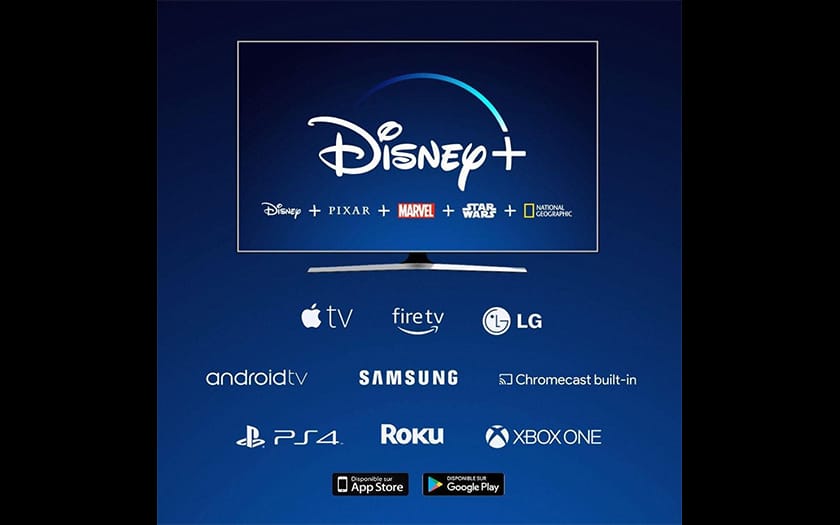 The unique Disney + formula allows you to share your account between 4 people. Nothing being stipulated for the moment on the limits of this sharing in the rules established by the platform, you can share your account with the members of your family, your friends, your colleagues, etc. You therefore have the option of using up to 4 devices at the same time. In addition, Disney + authorizes the creation of 7 profiles maximum.

Yes, it is possible to download a series, a cartoon or a movie on Disney +, in order to watch it later. If you have to take the train or metro regularly, take the plane or move in a geographical area where the connection is poor, do not hesitate to download everything you want before leaving. Downloading is possible on smartphone or tablet.