The Galaxy Watch 3 is the next generation of premium smartwatches from Samsung. While it retains a traditional design inspired by its predecessors, it also benefits from new features to further enhance the experience offered to users. Discover here a complete summary of the novelties of the smartwatch.

Samsung unveiled the Galaxy Watch 3, its new connected watch, at its Unpacked conference on August 5, 2020, which was also dedicated to the presentation of the Galaxy Note 20 and Note 20 Ultra. The smartwatch retains the same design as its predecessor and above all marks the return of the physical rotating bezel for a more classic appearance that will appeal to both technophiles and dandies.

What price for the Galaxy Watch 3?

Samsung has significantly increased the price of the Galaxy Watch 3 as the leaks announced. While the Galaxy Watch 1 was available from 309 euros for the more affordable version, the new watch starts at 429 € for the 41mm version and 459 € for the one with a 45mm case. Here are the prices in more detail.

We are seeing a move upmarket, confirming that Samsung wants to tackle the Apple Watch in the premium segment rather than compete with manufacturers Huawei, whose smartwatches are much cheaper. And as you’ll see, the Galaxy Watch 3 takes many of the best features of the Apple Watch Series 5.

When is the Galaxy Watch 3 release date?

The connected watch is available for pre-order from August 6 for availability on August 21, 2020, two weeks after the announcement. Ditto for the other products announced during the conference. The Galaxy Note 20, The Tab S7 or the Galaxy Buds will be available on the same date.

Why not a Galaxy Watch 2?

The explanation is simple and is pure marketing. The brand wanted to clarify its ranges so as not to lose the consumer with references too close to each other. In particular, Samsung was concerned that there was confusion in the minds of users between the already available Galaxy Watch Active 2 and the upcoming Galaxy Watch 2. With a Galaxy Watch 3, the feeling of evolution is much more present, as the general public may think that the Watch 2 and the Watch Active 2 belong to the same generation.

Two dial sizes are available: 41mm and 45mm. For the colors, the connected watch is available in silver or gilded bronze in 41mm and in bronze or black for the 45mm version. Regarding materials, eight variants will be in stainless steel (with leather strap), while the last will be entitled to a bracelet with titanium links.

For navigation, the Galaxy Watch 3 marks the return of the physical rotating bezel, which had disappeared on the Watch Active models (the first model had no navigation dial, the second had been integrated with a more discreet tactile digital ring, but less practical than the physical bezel of the Galaxy Watch). The use should therefore be at least as pleasant as on the first Galaxy Watch of the name with convenient and fast movements within the interface.

Of course, such functionality results in a heavier and less discreet product, perhaps less suited to sports activities, but with a refined aesthetic closer to a conventional fashion watch. The smartwatch clearly echoes the spirit inspired by the original Galaxy Watch, moving away from the design cues seen on the Galaxy Watch Active.

The most compact Galaxy Watch 3 display measures 1.2 inch (for the assumed dimensions of the watch of 41 x 42.5 x 11.3 mm), while that of the larger version (45 x 46.2 x 11.1 mm) goes up to 1.4 inch. Of course, this is technology AMOLED found here for better responsiveness and deeper contrasts. The time for the Micro-LED has not yet arrived. 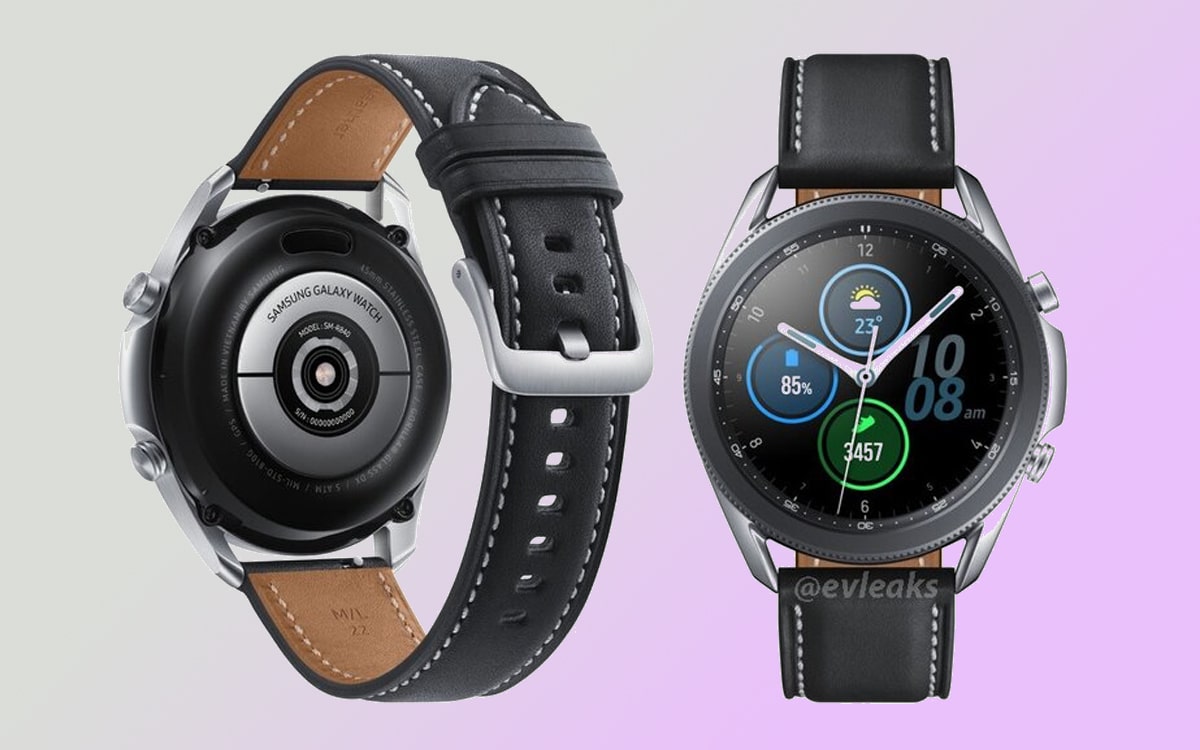 Which technical sheet for the Galaxy Watch 3?

When Samsung can do without an external supplier to equip its devices, it does not hesitate to do so. No SoC Snapdragon Wear 3100 to animate the connected watch therefore, but an Exynos 9110 home chip, associated with 1 GB of RAM and 8 GB of storage space.

The screen is protected by glass Gorilla Glass DX + from Corning Company. In addition to being resistant, it benefits from an anti-reflective filter so that you can see perfectly even in direct sunlight.

The Galaxy Watch 3 is also certified to be water and dust resistant IP68. It is 5ATM waterproof, meaning that it can be submerged for a long time (10 minutes) up to 50 meters deep. No need to take it off in the shower or to swim on the surface. Finally, the smartwatch meets the US military standard MIL-STD-810G, that is, it has successfully passed a series of tests to prove its robustness.

For connectivity, there will be the choice between simple compatible versions Bluetooth 5 and WiFi and more advanced versions with support for 4G LTE in addition to WiFi. 4G compatibility is very convenient for receiving notifications even when the smartphone linked to the watch is not nearby. Thanks to the microphones and speakers, it also allows you to take and make calls directly with the smartwatch. The downside is the price: in addition to the inflated starting price for 4G smartwatches, you have to add the cost of the monthly subscription and activation of the virtual SIM card.

The Galaxy Watch 3 comes with a Integrated GPS. This offers navigation options for the watch and much more precise measurements of routes and sessions taken during physical activity. The other side of the coin: activating the GPS drains the battery considerably, which affects the autonomy of the smartwatch.

What is the autonomy of the Galaxy Watch 3?

This is precisely the question of autonomy. This is often an annoying topic with smartwatches: Apple Watch doesn’t even last 24 hours, while Samsung smartwatches typically target two days of use.

This is the case with the Galaxy Watch 3, which has batteries of 247 mAh for the 41mm version and 340 mAh for the 45mm version, that is to say exactly as on the two variants of Galaxy Watch Active 2. With the same battery capacity and with the same Exynos 9110 chip, the autonomy of the Watch 3 is substantially identical to that of the Watch Active 2, at know two days.

Nothing new when it comes to recharging either. The Galaxy Watch 3 uses the same wireless charger as the Watch Active. The watch can also be recharged via the reverse charge function of Galaxy smartphones (recent S and Note ranges).

The software and features of the Galaxy Watch 3

No surprise here, Samsung uses its proprietary operating system Tizen for its new generation of connected watches. The OS is extremely capable and proven, there is no reason to switch to Wear OS, Google’s solution. At launch, Tizen 5.5 will be shipped, always with the Bixby assistant.

Logically, the Watch 3 will be entitled to all the features already present on the old models of the brand’s smartwatches. The heart rate sensor, improved sleep tracking functionality and three big new features including blood oxygen level (VO2 Max), fall detection and an ECG, promising a more comprehensive health application. Like the Apple Watch Series 6, Samsung’s watch offers a period management tool for women.

A new Weather app has appeared, while the music widget has been reworked. For emails, we will regret the disappearance of Samsung Email in favor of Outlook. Looks like new “watch faces” are coming, and they’re getting more and more customizable. Notifications are also enhanced, with more information presented on screen for each one.

It is also possible to pay with your Galaxy Watch 3. While Samsung smartwatches have been equipped with NFC chips for a long time, it has not been possible or easy to pay with them. The situation has since improved with the progressive support of Samsung Pay on the manufacturer’s smartwatches. The new model is well compatible.

Of course, it will be possible to control all these functions and control the data and measurements from the Galaxy Wearable application on your smartphone (Android or iOS). Below are screenshots of the interface for a mobile connected to a Watch 3.