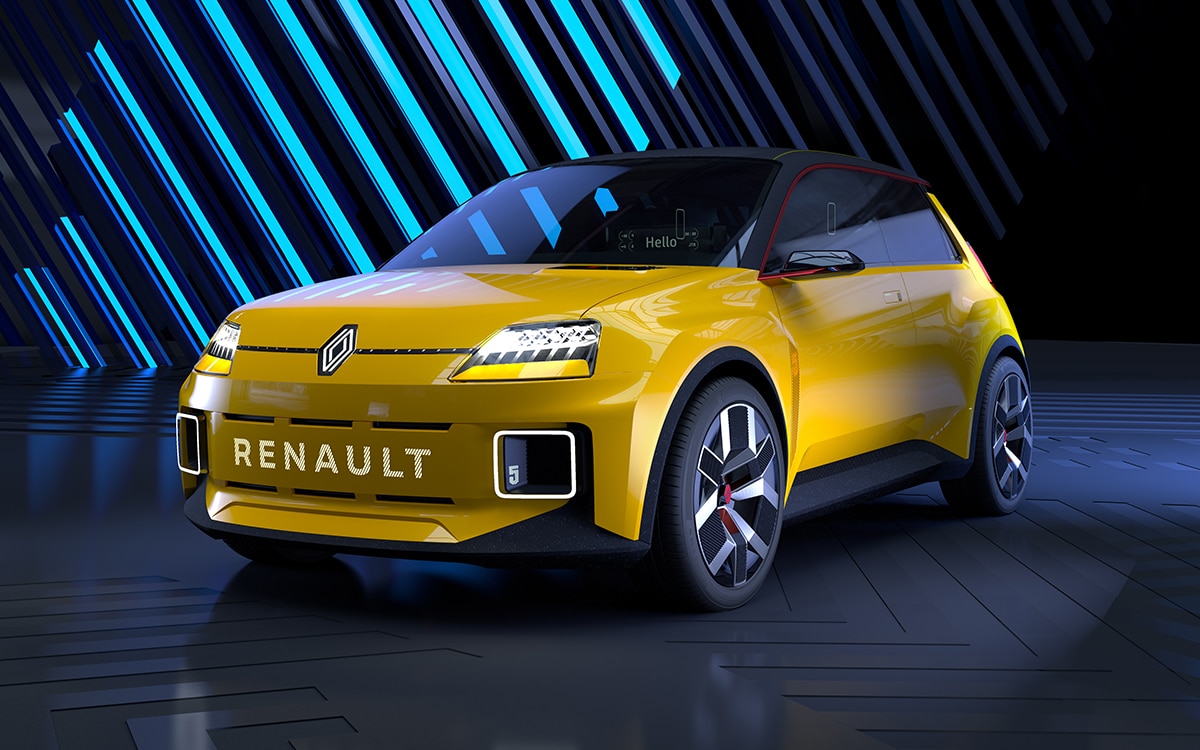 It is through the voice of its new big boss Luca de Meo that Groupe Renault unveiled its Renaulution plan. Among the main announcements is the launch of a future 100% electric Renault 5, the contours of which can already be seen with the R5 Prototype.

After appointing former Seat boss Luca de Meo as its head, Groupe Renault recently launched its Renaulution. A strategic plan structured in 3 phases which will all be launched in parallel. In addition to the financial aspects, in particular concerning the recovery of the margin and the profitability of the brands, Renault plans to launch 14 new models in its range by 2025.

Without surprise, seven will be 100% electric, while the other seven will be positioned on segments C and D while giving pride of place to hybridization. It was in this context that Renault unveiled the Renault 5 Prototype, a concept that heralds the brand’s next flagship electric car model. 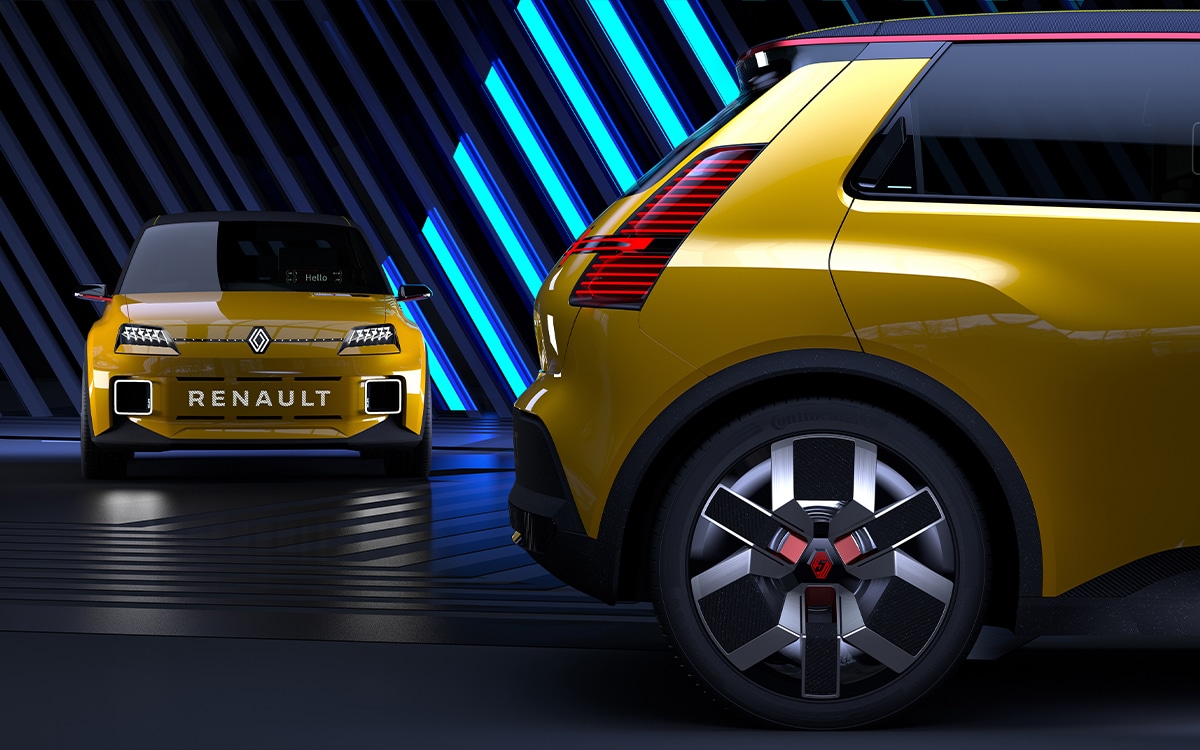 Renault’s declared objective with this emblematic model: draw inspiration from its glorious past while offering a modern and accessible vehicle. The Renault 5Prototype is a compact city-dweller which takes up the general lines of its famous ancestor, not without modernizing them with lots of LEDs, especially on the front face. 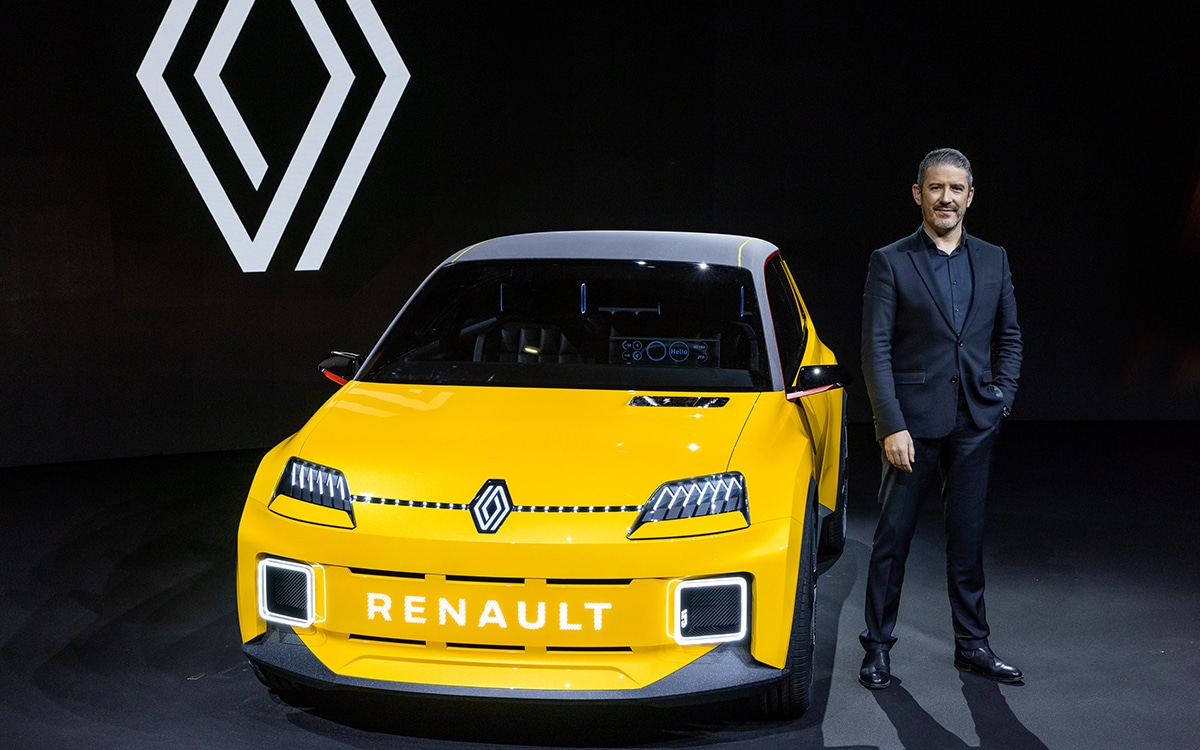 Gilles Vidal’s design team has opted for a yellow “pop” bodywork in the era of time, while the finishes and the materials chosen are inspired by the world of electronics, furniture and sport. Sportiness will be a question with this electric vehicle, which can also rely on the manufacturer’s expertise in F1. Certain elements of the Renault 5 Prototype confirm this, such as the air intakes underlined by LED lighting on the front face, the front spoil, or the hollow fenders and raised shoulders. 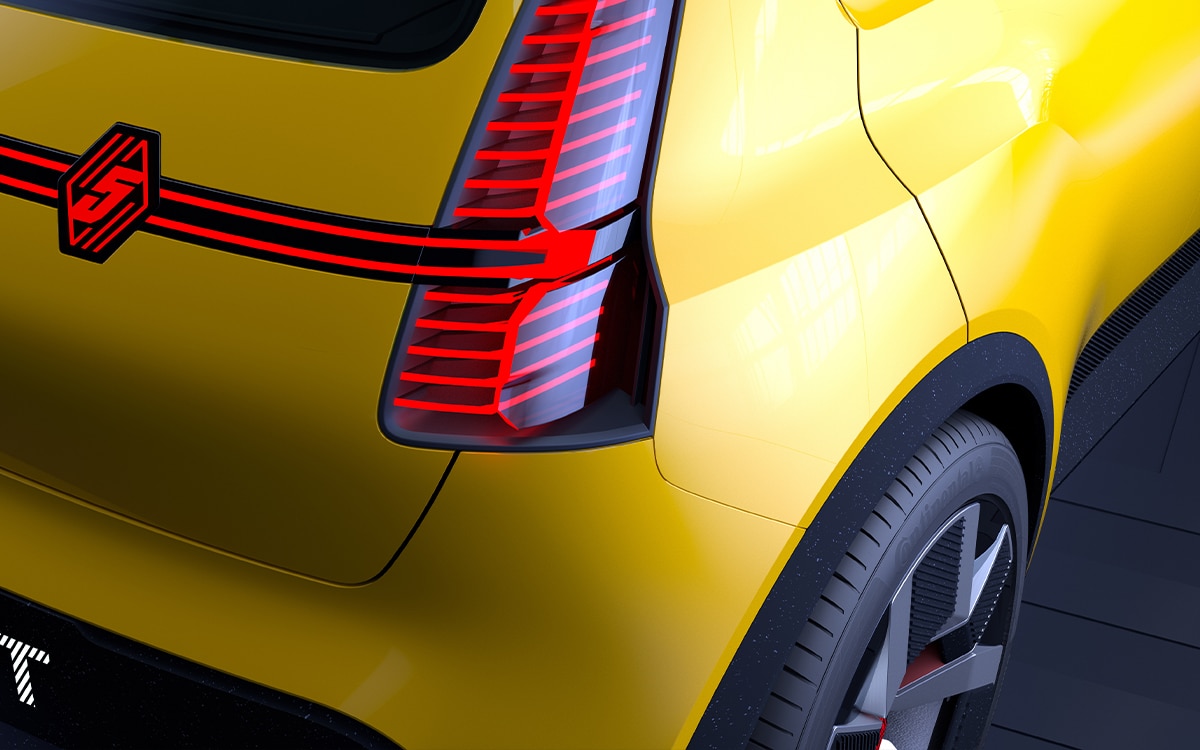 In addition to the modernization of style elements inspired by the original R5, some also hide practical functions. This is particularly the case withair intake in the hood which conceals the charging hatch, for example. A design that is also reminiscent of the Honda e, the first electric car of the famous Japanese brand, which also played in F1 until recently. 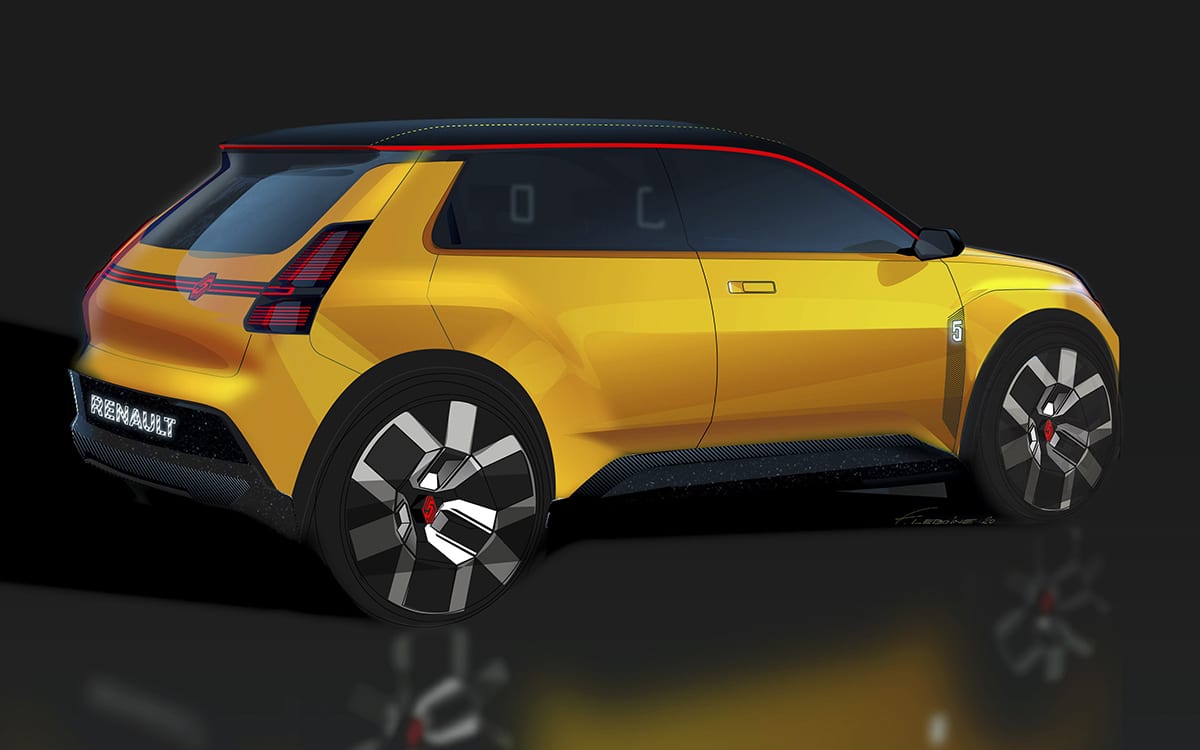 As at the time of Honda’s announcement with its small electric compact, the photos of the Renault 5 Prototype made the web vibrate. The manufacturer was not mistaken in relying on one of its iconic models, while playing the card of modernity and the French touch. The rear lights incorporate aerodynamic deflectors, and the fog lights in the bumper act as LED daytime running lights. Lighting plays an important part in the design of the car, especially with front and back logos that light up to bring it to life. A very current trend there again. In addition, there are other nods to the Renault 5 in the side grille, as well as the wheels and logo at the rear. 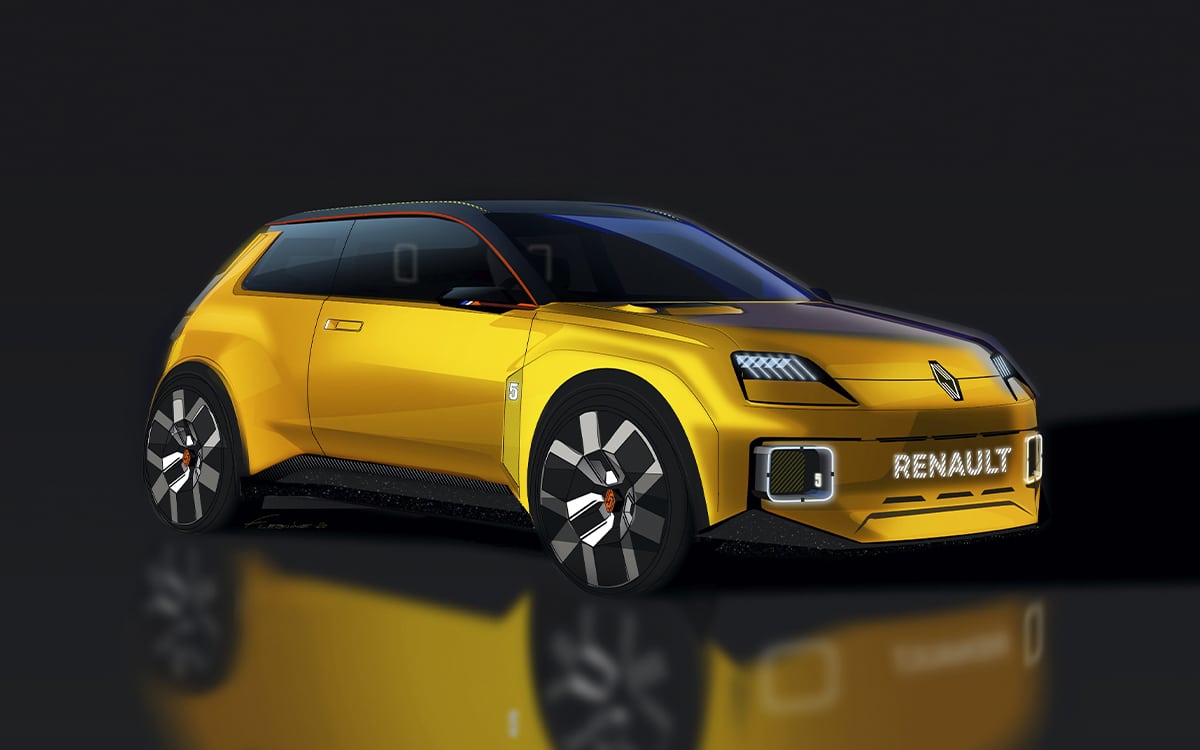 Front and fabric roof take inspiration from the world of interior design by playing the “French” charm card to the full. As was the case with Alpine’s return, the French flag underscores the origins of the Renault 5 Prototype, a flag displayed on the exterior mirrors.

🛠 Which engine for the future Renault 5electric?

Renault has not yet communicated a lot of information on this new electric car. We will therefore have to wait to learn more about this long-awaited model. Interior information is limited to the integration of a small transparent screen on the dashboard. 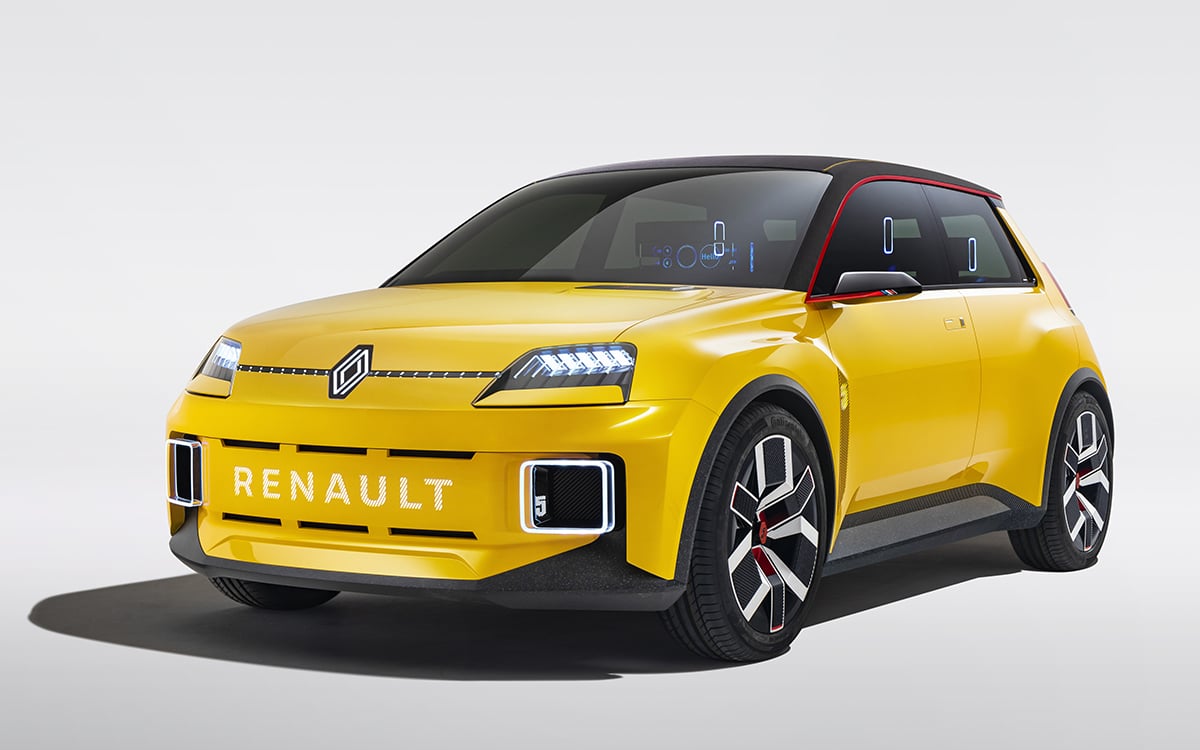 On the engine side, we can imagine that the manufacturer will take over the electric unit from the Renault Zoe current or Twingo Electric. As a reminder, the first has two engines to choose from with 80 kW (108 hp) on the one hand, and 100 kW (135 hp) on the other. These deliver 225 Nm and 245 Nm respectively. For its part, the electric Twingo benefits from a more modest engine in view of its dimensions. This time it is a block of 60 kW (81 hp) capable of propelling the small city car to 100 km / h in 12.9 seconds.

🔋 What range for the Renault 5 electric?

Again, we can assume that the next electric R5 will display performance and range between those of the Renault Zoé and the electric Renault Twingo. In its low configuration of 80 kW with the 52 kWh battery, the Renault Zoé can travel 395 km on a charge following the WLTP combined cycle. The most powerful version is practically on a par with 386 km of autonomy between two charges. 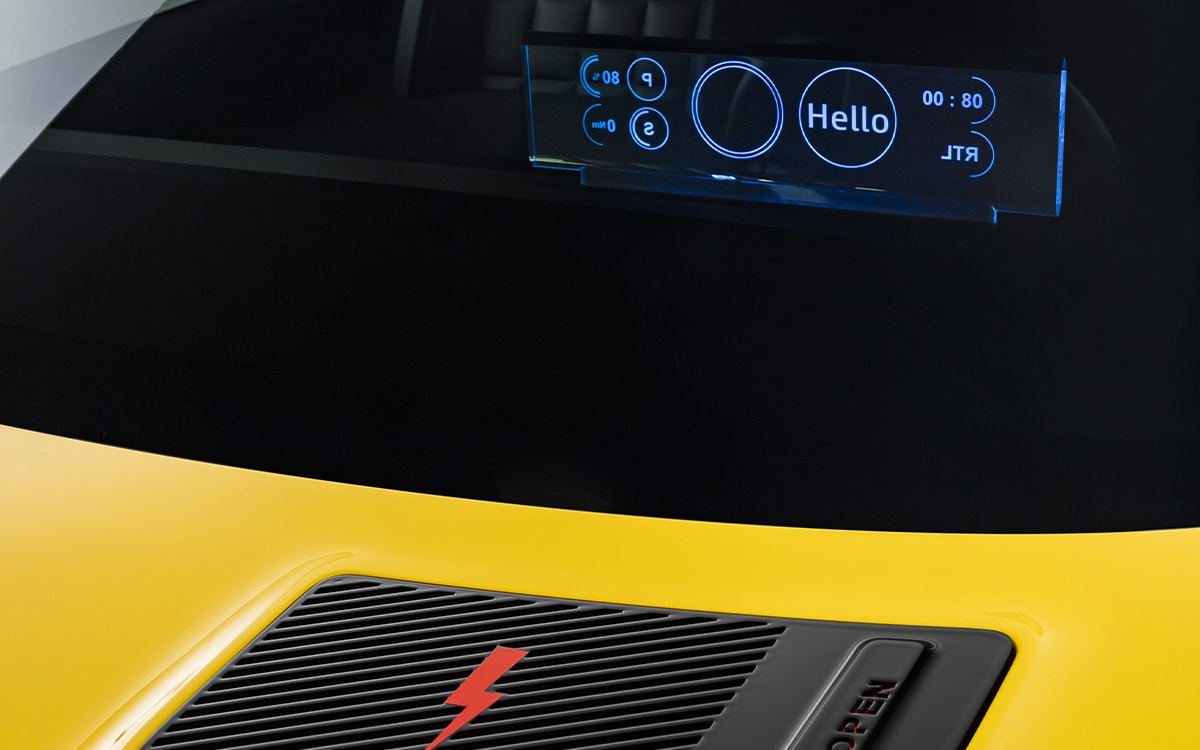 For its part, the electric Renault Twingo has a small 22 kWh battery which reserves it for strictly urban and peri-urban use. Indeed, thus equipped it is announced to travel up to 270 km in urban cycle WLTP, and 190 km in cycle WLTP.

It is also on these two existing models that we will base ourselves to estimate the recharging times of the electric Renault 5. With its small battery, the electric Renault Twingo only takes an hour to regain 80% capacity on a 22 kW Wallbox. Count 3:20 with a power of 7.4 kW, 6:45 with a Green’Up plug of 3.7 kW, and finally 12 hours on a domestic plug of 2.3 kW. 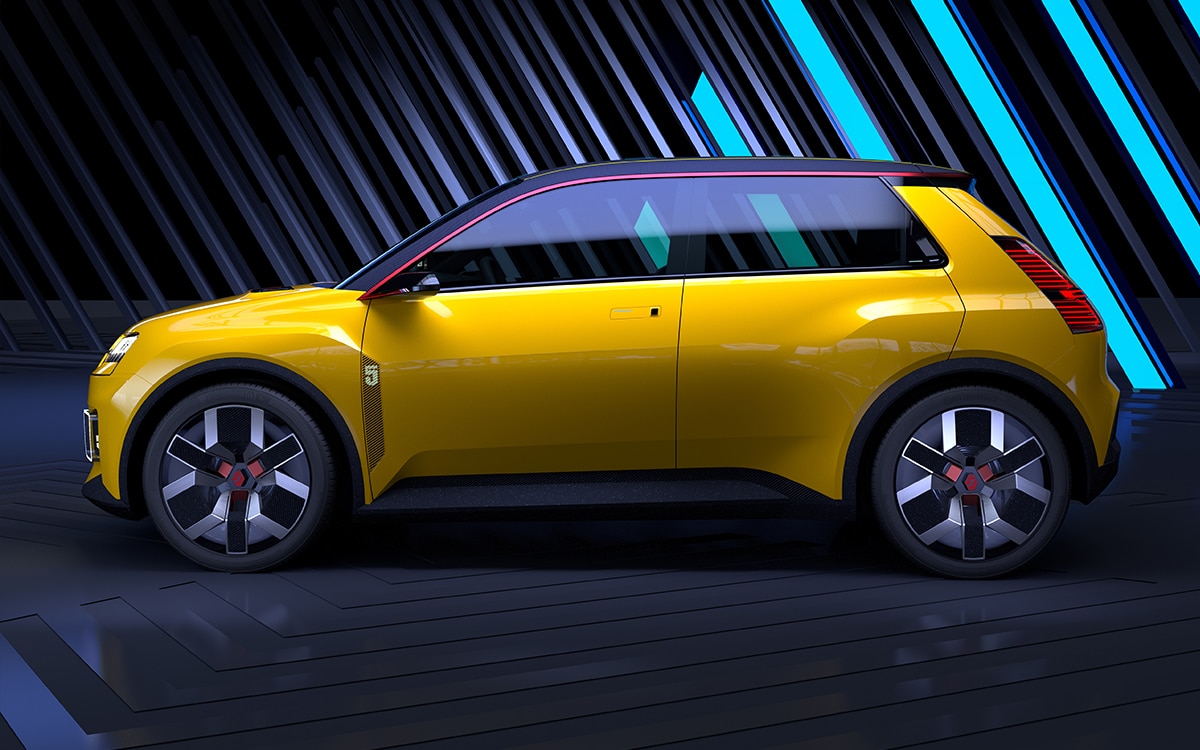 For his part, the Renault Zoé can take advantage of “fast” charging at 50 kW on a direct current terminal to regain 80% capacity in 1:05. Using a 22 kW Wallbox will double this time while it will take more than 25 hours on a domestic outlet.

🗓 Where and when will the Renault 5 Electric be produced?

Among the rare information communicated since Luca de Meo’s press conference, Jean-Dominique Senard, President of the Renault brand and of the Renault-Nissan-Mitsubishi Alliance, provided some details on the production site of the future Renault 5 electric.

Unsurprisingly, it will be produced in France, and more specifically at the Douai plant, which already houses the Scenics, Talisman and other Renault Espace. As a reminder, Renault plans to produce nearly 400,000 electric vehicles in an electric hub located in the north of the country. 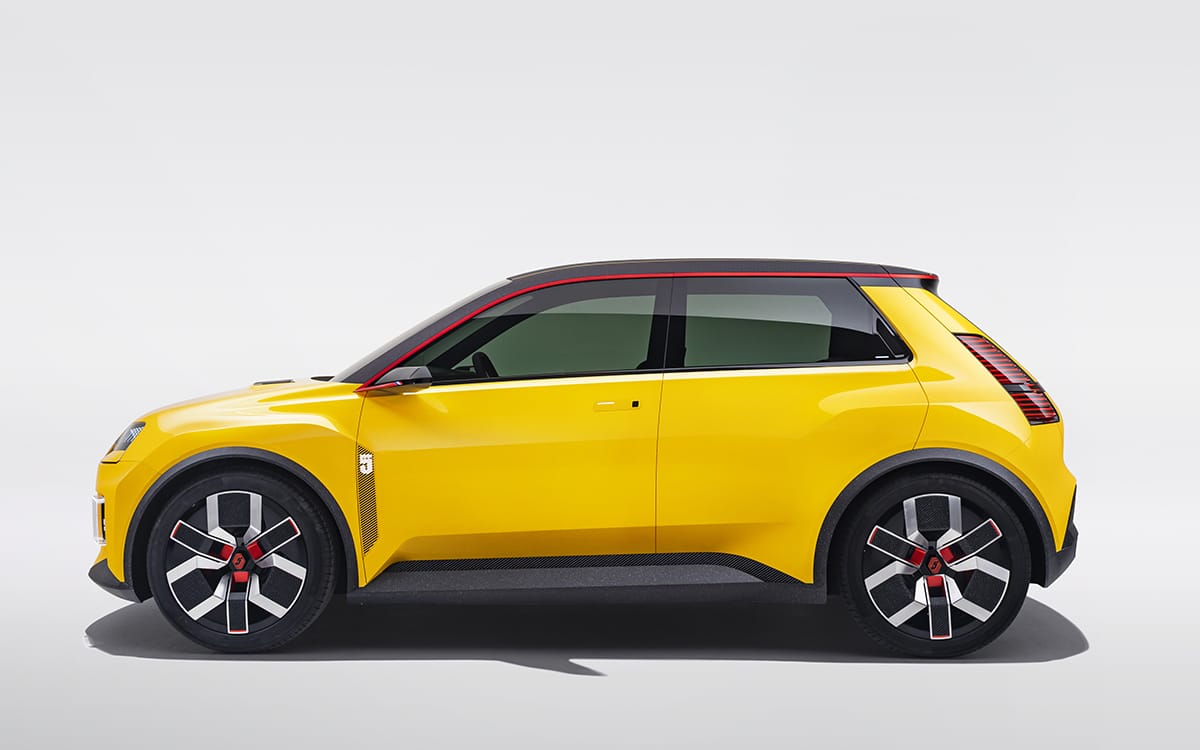 It is of course still too early to say on the release date, but things should accelerate quickly with the announcement of the end of the Twingo. Although it is perfectly suited to large cities, and it goes in the direction of policies to fight against heavy and bulky vehicles, it would not be profitable according to Luca De Meo. Normally, the Renault 5 Electric will therefore replace it in 2024, alongside the electric Mégane and perhaps the replacement for the Zoe which will celebrate its tenth anniversary next year. 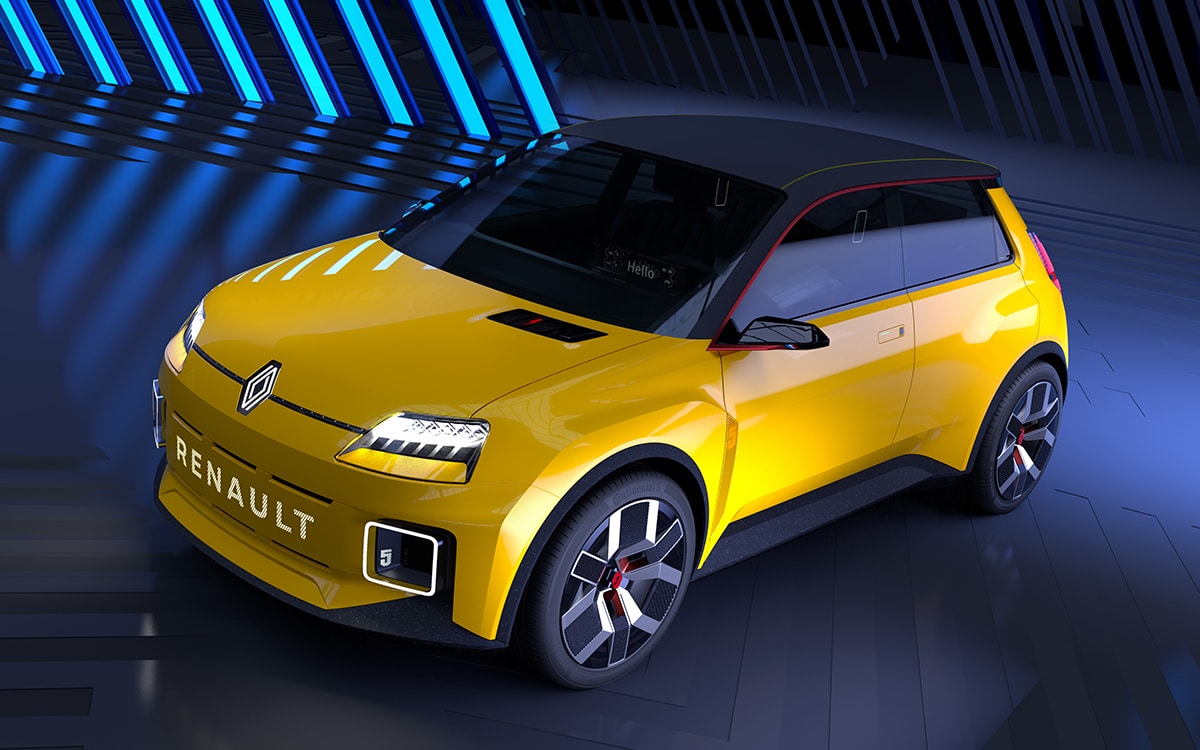 💰 What is the price of the Renault 5 Electric? 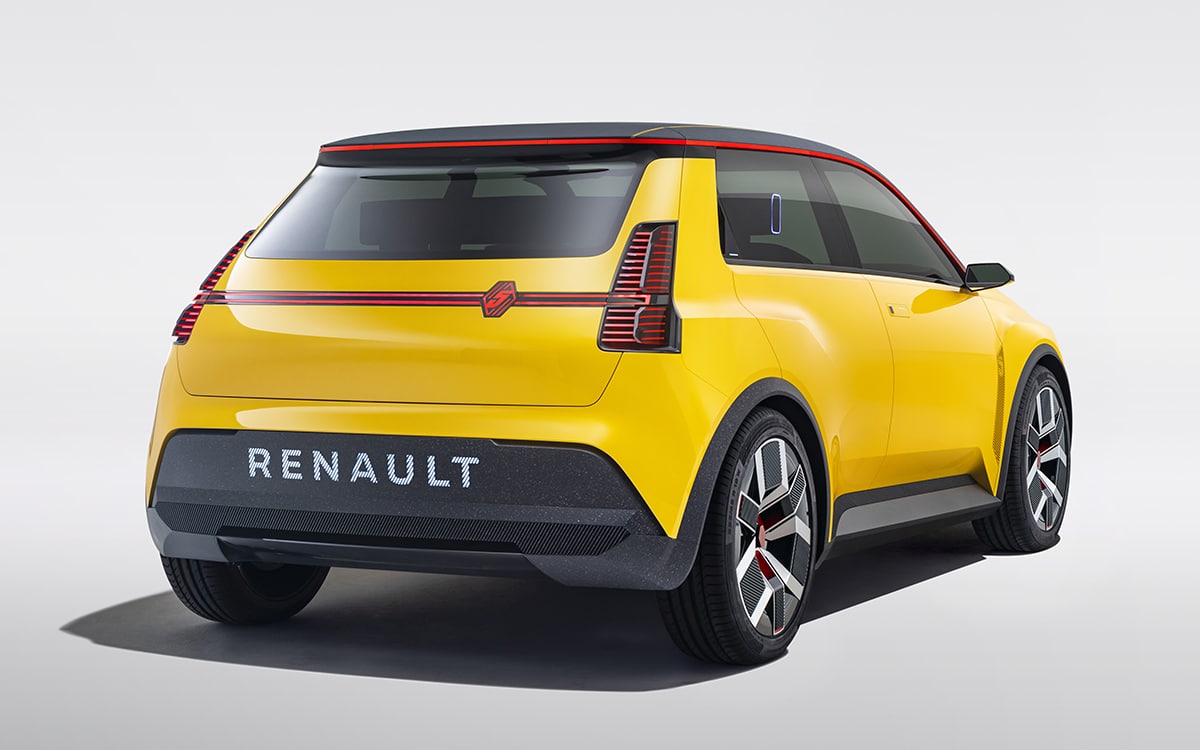 But in all likelihood, the replacement for the electric Twingo should be very affordable when it goes on sale. For memory,the current electric Twingo is offered from 21,350 euros before ecological bonus in its entry-level Life version. The Intens model which heads the range is displayed from 25,450 euros. Finally, note that the Dacia brand of Groupe Renault should also pull prices down with its electric Dacia Spring which is expected this year at around 10,000 euros. 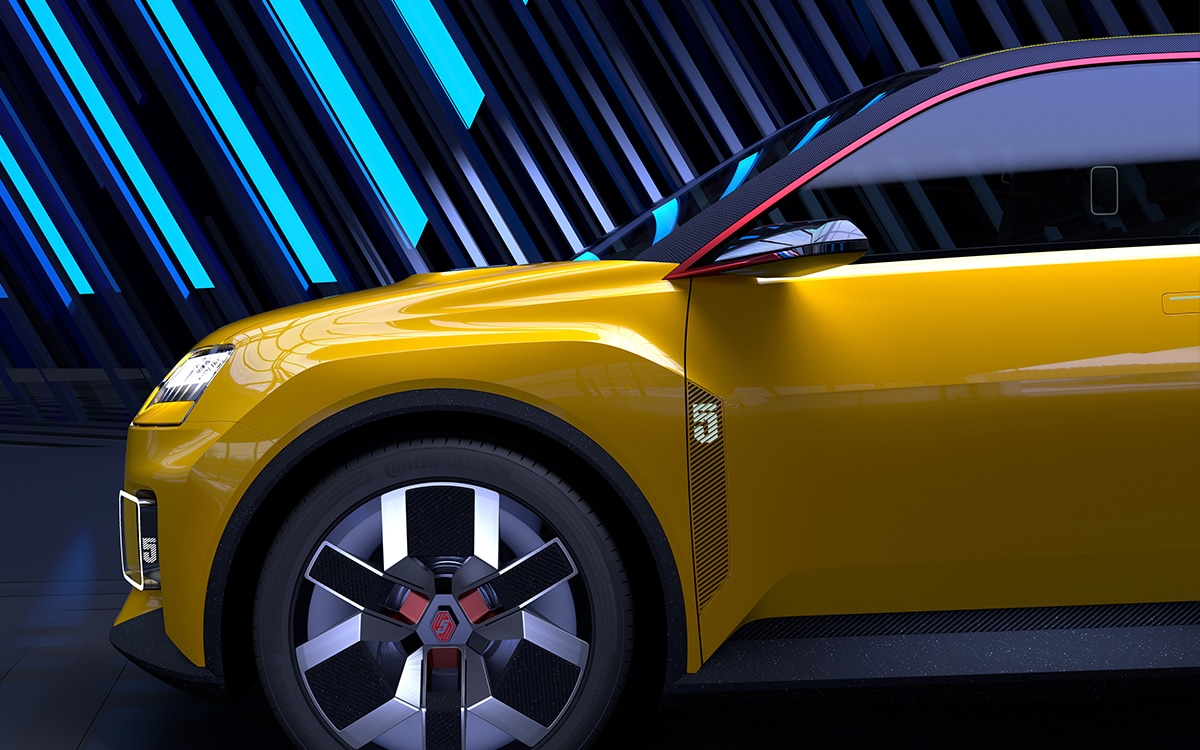