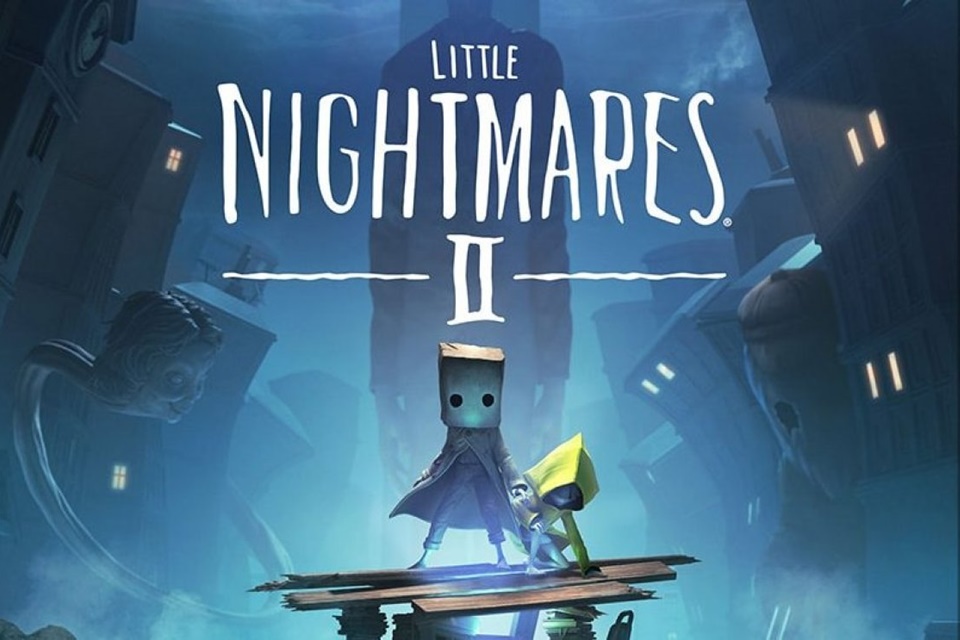 In October 2020, developer Tarsies Studios and publisher Bandai Namco made Halloween more fun with the first demo of LIttle Nightmares II, continuation of the macabre indie game of 2017.

Even short, the build has already served to give a taste of what players could expect, and now, a second preview has been released, bringing the first two chapters of this new sinister journey, and honestly, the hype has only increased!

The nightmares that haunt childhood

It all starts with poor Mono, our new protagonist, in a forest that could be considered beautiful, if it were not full of traps, a bag with captured people, and even a cage that seems to present the remains of an unfortunate child.

Small and slight, the boy needs to move carefully to avoid a terrible death, especially when entering the Hunter’s hut responsible for the devices found in this area.

Luckily, he soon finds Six trapped in the basement, and after releasing her, he can count on his help to solve impossible puzzles for just a withered child, a very important partnership so that the two can safely cross the place and escape from the clutches. of the enemy.

With great cost, and several moments of pure tachycardia, the two manage to escape from the dark forest, ending up in a ghost town, whose only remnants of its inhabitants are clothes and shoes scattered everywhere.

But the misfortunes are just beginning, as soon they find themselves in a school worthy of anyone’s worst nightmares, with a teacher who can’t wait to devour them and bizarre students called bullies, eager to end the lives of young people . 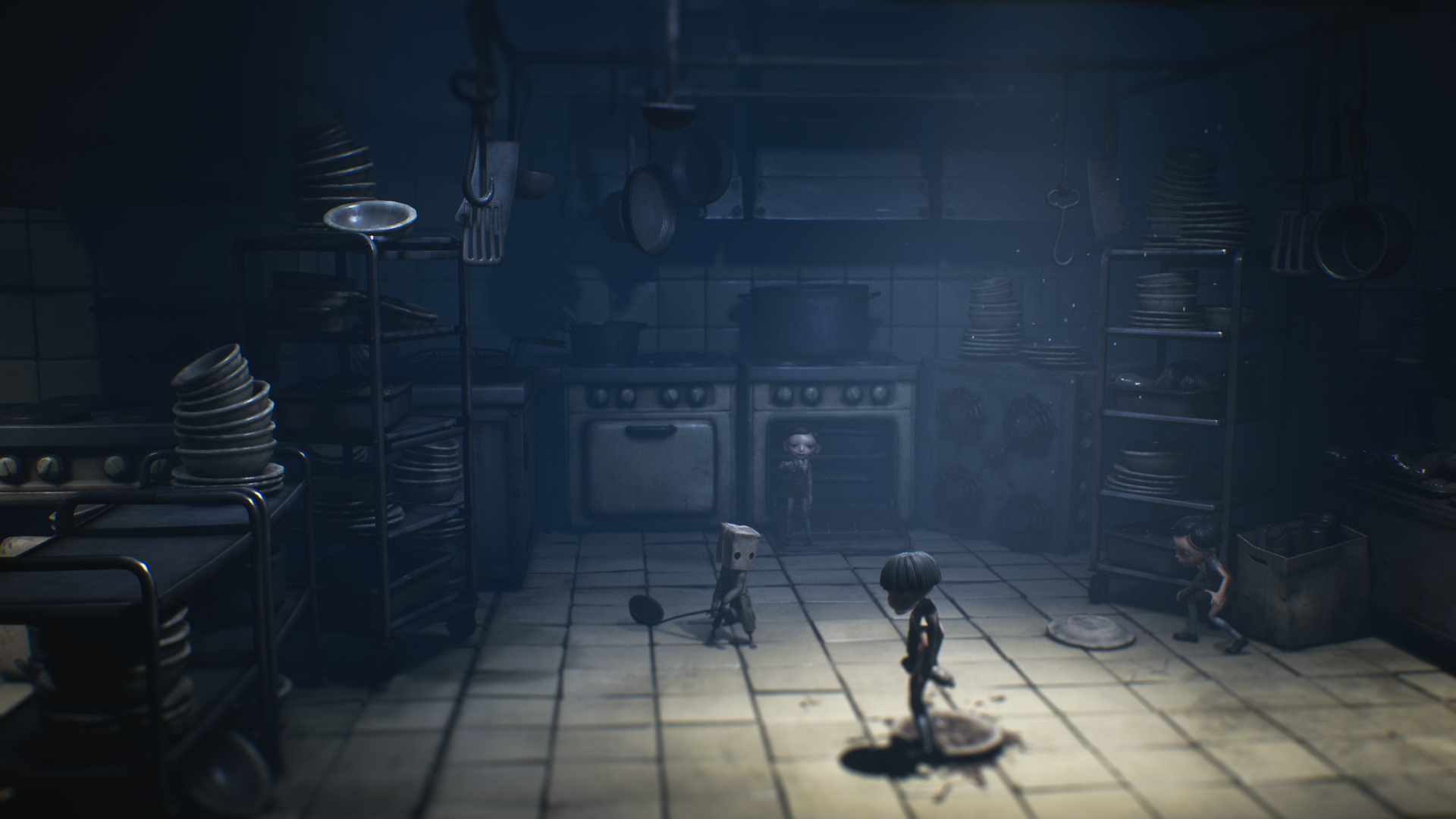 If there’s one thing that Little Nightmares II hits right is the feeling of hopelessness and helplessness throughout the gameplay. The enemies, the scenarios and even the available weapons are much bigger than our protagonists, giving a feeling of extreme fragility, making each advance completely agonizing.

I don’t know how many times my hands sweated and I found myself hoping not to be seen trying to sneak past the macabre creatures, and the control vibrating in sync with the little boy’s fast beating only further reinforces the anguish. 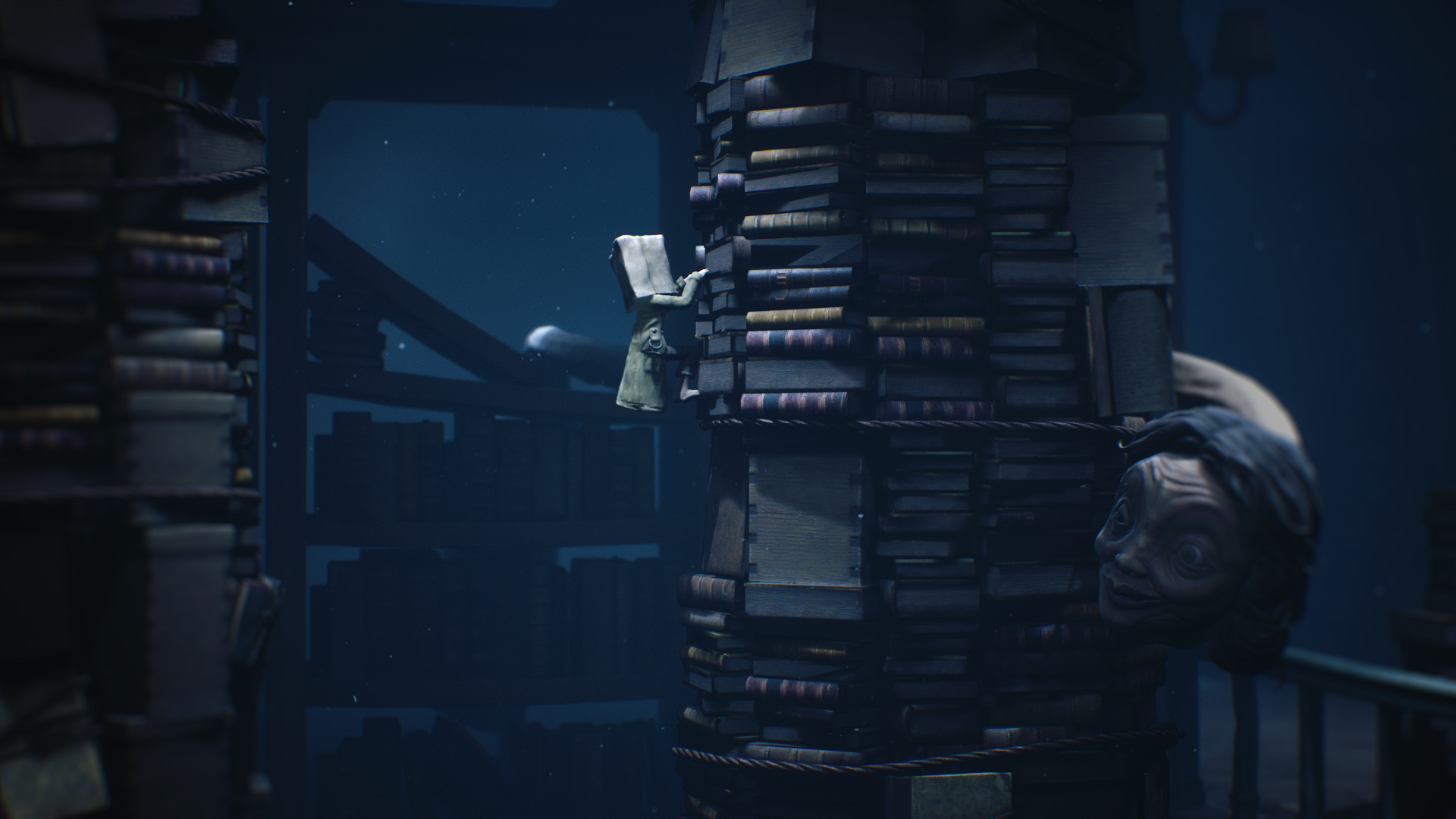 In addition, at various times we see the difficulty of children to interact with large and heavy items, and even to attack enemies. It is necessary to calculate the right moment of the blow, because Mono’s arms do not have the necessary strength to strike one blow after another, and this can lead to its end.

The game brings a real immersion in the fight for survival, with all the dismay of facing a cruel and much more powerful world, which does not seem to be time to end the journey of the little ones.

Just like its predecessor, Little Nightmares II get it right in the puzzles. They are very intuitive and fun, so even in the most frightening situations, it is not difficult to find your way out to the next part.

It is worth remembering that Mono may have the spirit of a fighter, but his body is certainly not the strongest and most resilient of all. Therefore, it is necessary to pay close attention to the scenario and choose the right points to descend from high places, or our protagonist may end up dying. 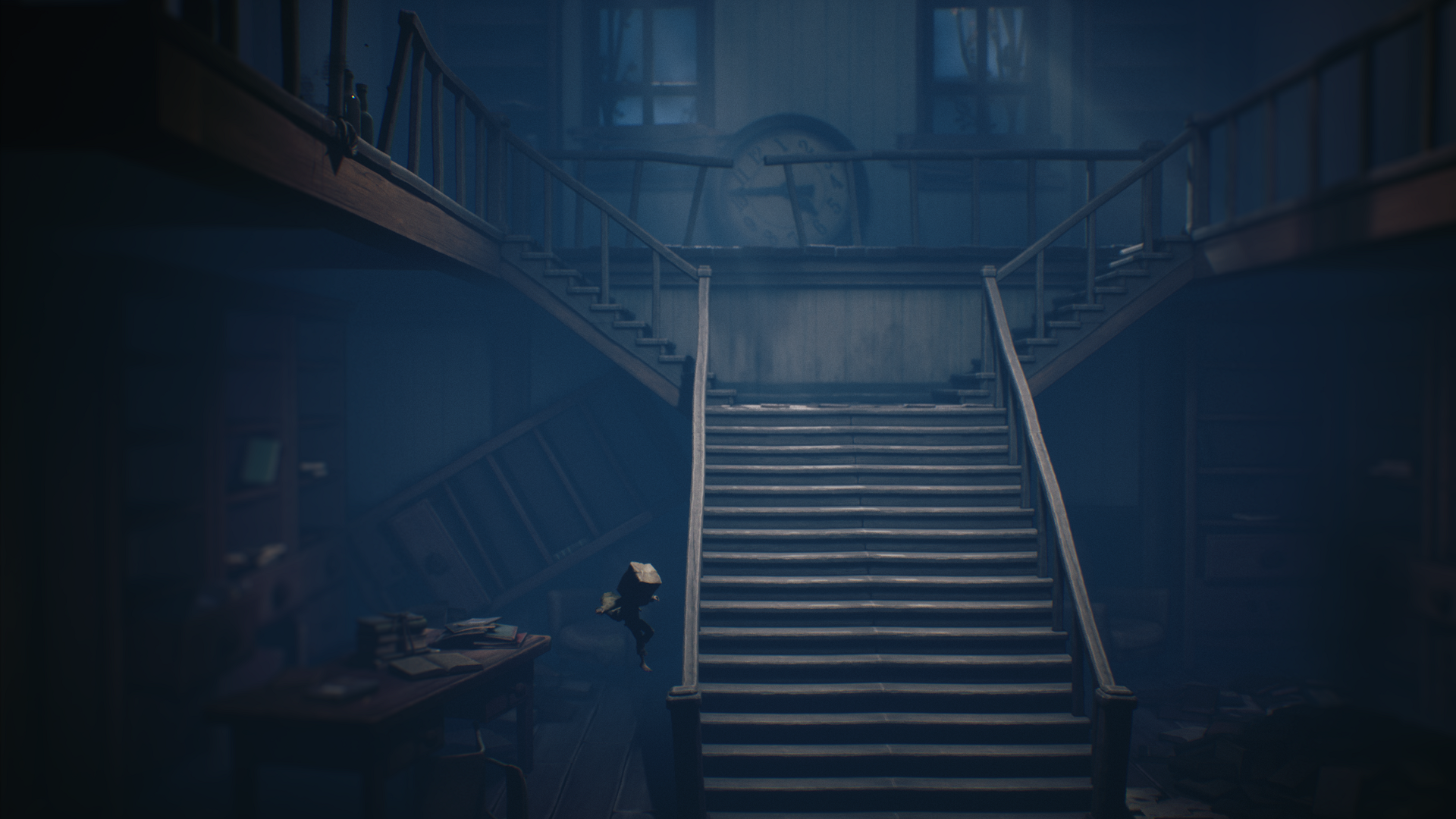 Six’s help is also very important in reaching higher places, pushing heavy objects, making big jumps and even holding enemies, which makes her an excellent companion in the midst of all this confusion.

The possibility of combat is also a very interesting mechanic, and even with the little boy’s difficulties in wielding his weapons, it is fun to be able to fight back and defend himself in a few moments, and not just run and hide all the time.

Well, I only played two chapters and I can’t wait to be able to enjoy the full game in February! The graphics are beautiful and the gameplay is interesting and engaging, with the two hours needed to complete the build passing before I even realized it. 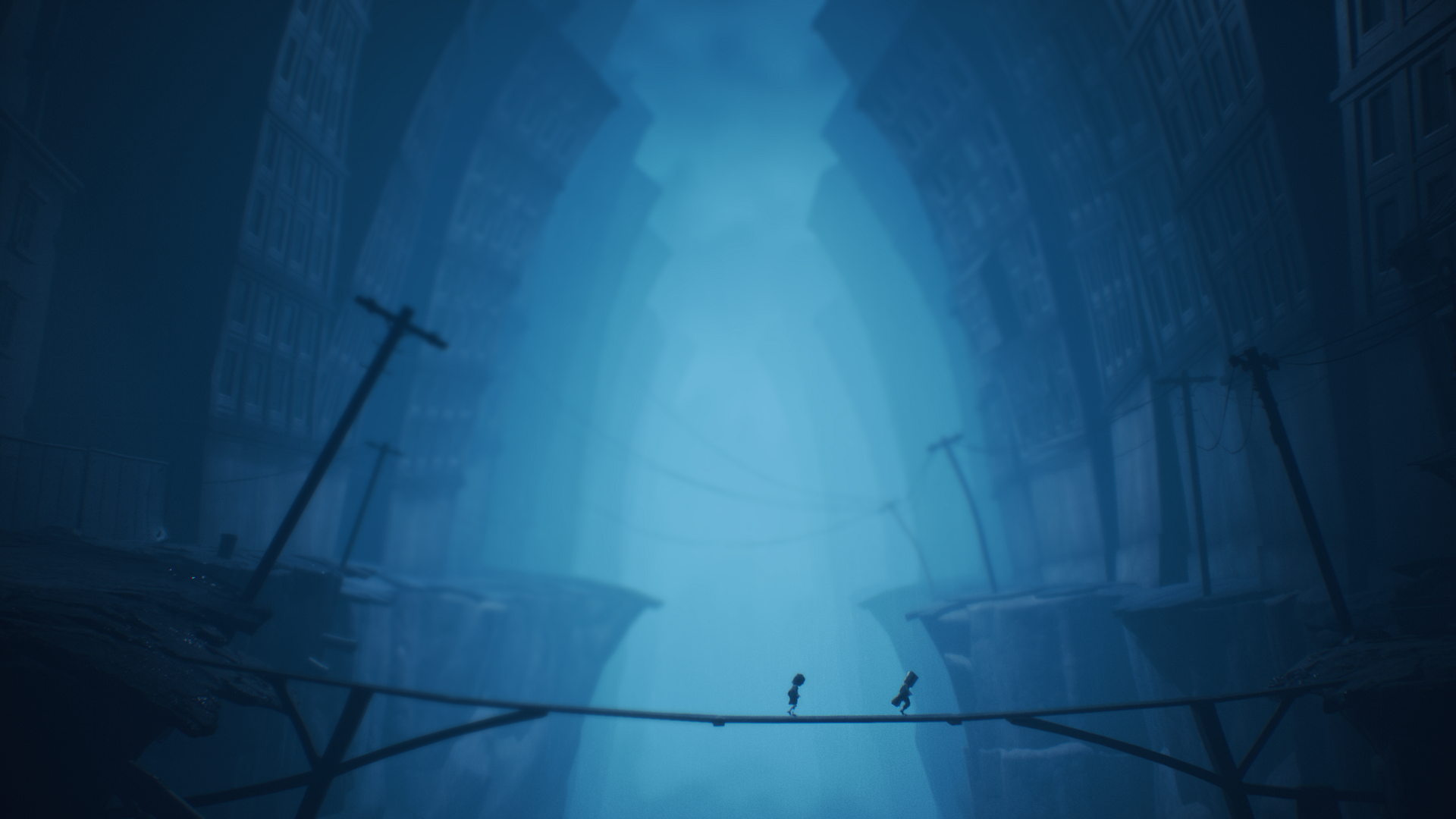 From what I could see from the story, we will have an adventure as macabre, or even more, than the first title, and that will certainly guarantee good hours of fun. For anyone who is a fan of puzzles and horror, this title can certainly be an excellent choice of gambling next month!

Little Nightmares 2 will be released for PC, PS4, Xbox One and Switch on February 11th.