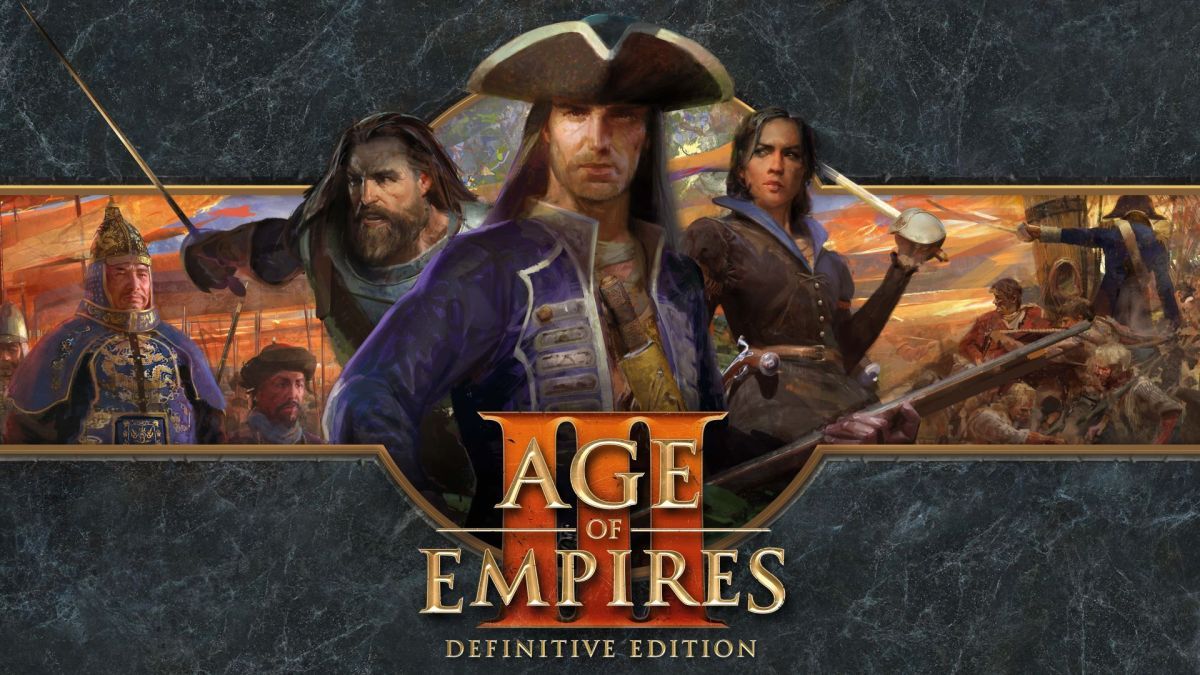 Age of Empires it has a captive place in the hearts of players from all over the world. A lot of people learned to love strategy games and ended up getting addicted to this style of play because, back there, they had the opportunity to play with war tactics in the historical series.

The franchise grew with the RTS (Real Time Strategy) games and helped shape, along with other games of the genre, styles that are still loved today, such as MOBAs headed by League of Legends and Dota, for example

Among the greatest strategy games of all time, his trilogy has been undergoing reformulations and we finally reached the third chapter, not as popular as the Age of Empires II, but innovative in its own way.

Microsoft gave us early access to the game’s beta to test some game modes and mechanics of Age of Empires III: Definitive Edition and gave us an exclusive interview with the game’s creative director, Adam Isgreen. Follow with us our first impressions of the game with some extra information about the development!

The history of the colonization of the Americas and its possibilities

In the preview, we played one of the campaigns called “Blood, Ice and Steel”, Escaramuça mode against AI, in addition to the two new Art of War and Historical Battles modes and a small multiplayer demo, where you play with the community of Insiders , which tests the game and gives feedback to the development team.

In the interview, Isgreen also mentions that the Asian Dynasties and Fire and Blood campaign expansions, which complement the story, will also be present in the Definitive version at launch.

Although still incomplete in the test, having so many forms of game already in the beta was very good, mainly because it gives us an idea of ​​the dimension and size of Age of Empires III: Definitive Edition, with a great variety of gameplay.

The history of the game is very much focused on the colonization of the Americas, but there are a very good number of civilizations and this can allow the player to vary a lot in strategies and gameplay across different maps, which also influence how you define your tactics and why. where you attack with your troops, for example.

The aesthetics of civilizations are quite extensive, with troops and villagers unique among the peoples, taking into account all the nuances and the very important culture of each people. In the 2005 version, there were some problems with the representation of civilizations, which seems to have been corrected in the Definitive version, since the director himself confirms that they worked with tribal consultants for greater care for cultures.

“We decided to fix this by working directly with tribal consultants to respectfully and accurately capture the uniqueness of their people, history and cultures. Players who return will discover that there have been some changes in Native American civilizations and we hope you find them as attractive as we are. . “, comments Isgreen.

Other improvements, such as completely redone kinematics, 4K graphics, new missions, accessibility features and other quality improvements were mentioned in the interview with Voxel.

In addition to the new game modes, we also experienced the two new civilizations that were added to the franchise: the Swedes and the Incas. The European nation and the South American empire bring two new strategies and powers, which can increase the range of possibilities. 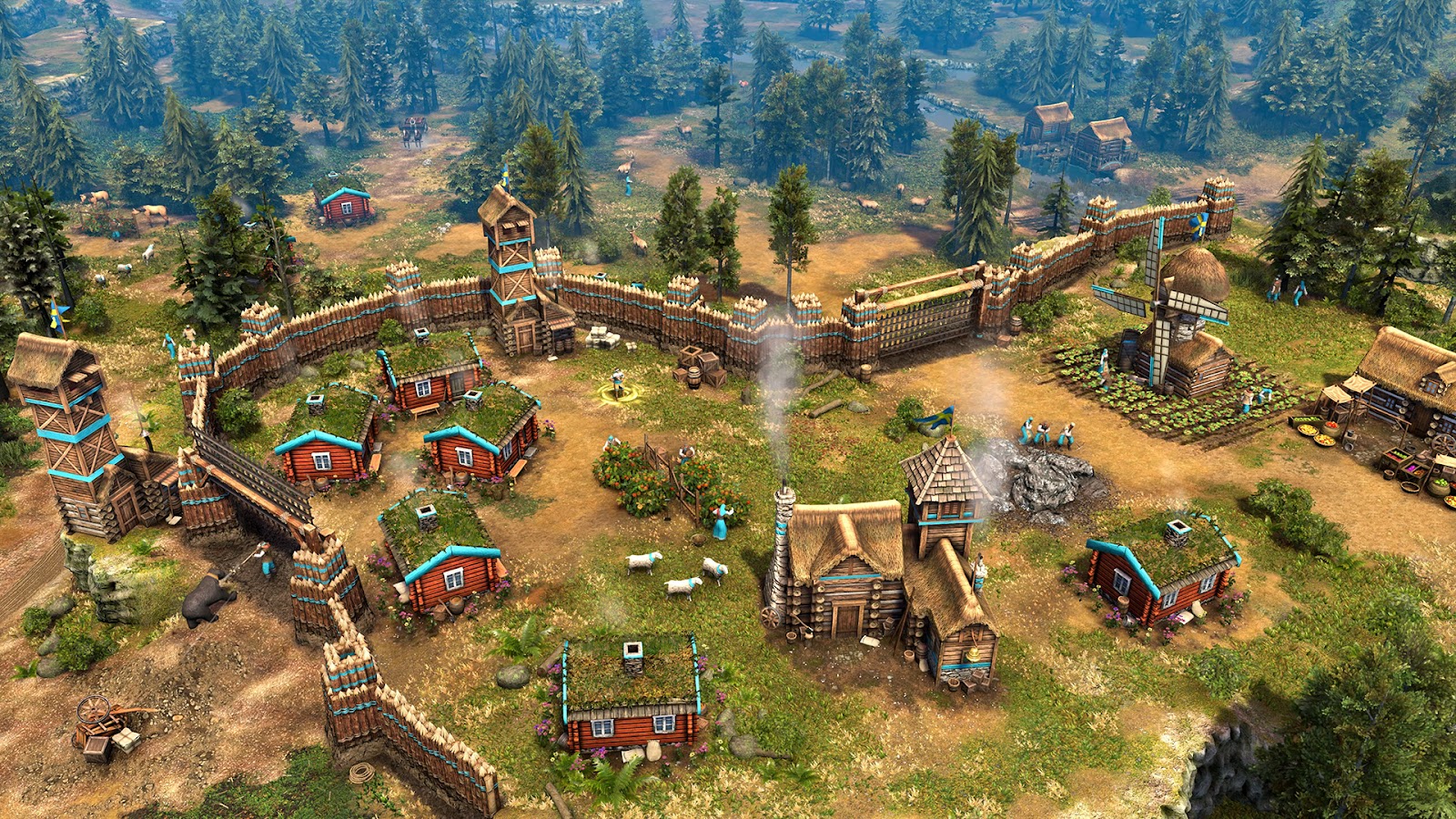 We started testing the game through the “Blood, Ice and Fire” campaign, with some missions that accompany the character Morgan Black exploring the new world. Overall, the objectives bring a little bit of everything you would like to see, with interesting battles on closed and open maps, as well as many moments that call for a strategy of war at sea, where you control your ships to face some pirates.

The missions are becoming increasingly challenging, especially for those who do not have much knowledge of the game. That’s because you need to vary your strategies depending on the map and the enemy. Even with the difficulty, it is more rewarding to play and win, as it rewards you with more knowledge and tactics for the rest of the game. 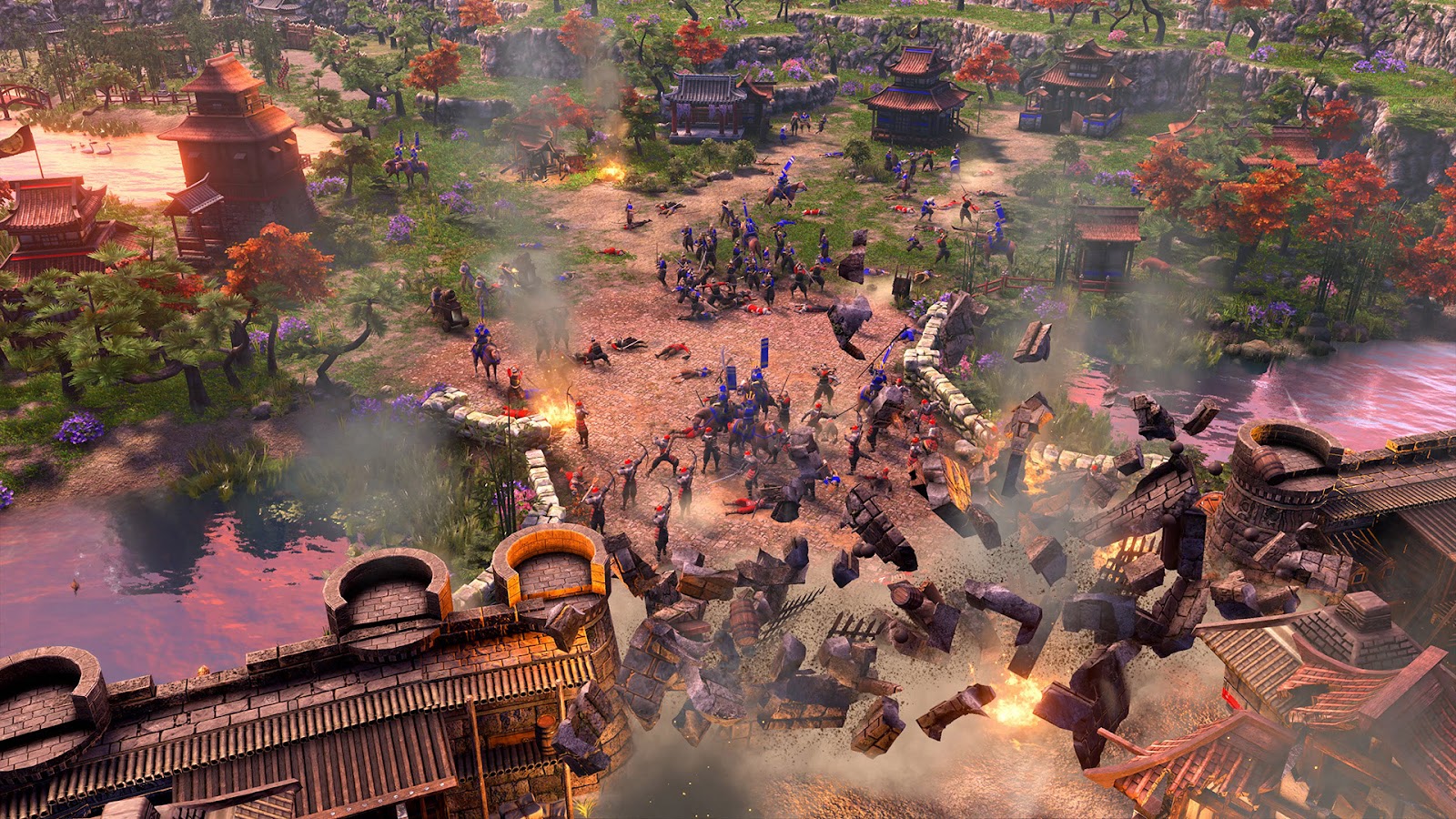 If you are afraid of not being able to adapt with mechanics, such as troop production, delegation of work to obtain resources, or with the import of cards from the capital with your skill points – classic system of Age of Empires III – you can be more relaxed.

The “The Art of War” mode was made exactly to bridge the gap between what the game has become with its variety and the players who have just entered this world. According to Isgreen, this mode was based on Age II, where it was possible to get used to the strategies in a very popular format among players.

However, we realized that it is very basic, intended for those who are really starting and want to learn the main controls to move on to other challenges. The other game modes and the exchange of experience gained in multiplayer or in the campaign are still the best teachers. 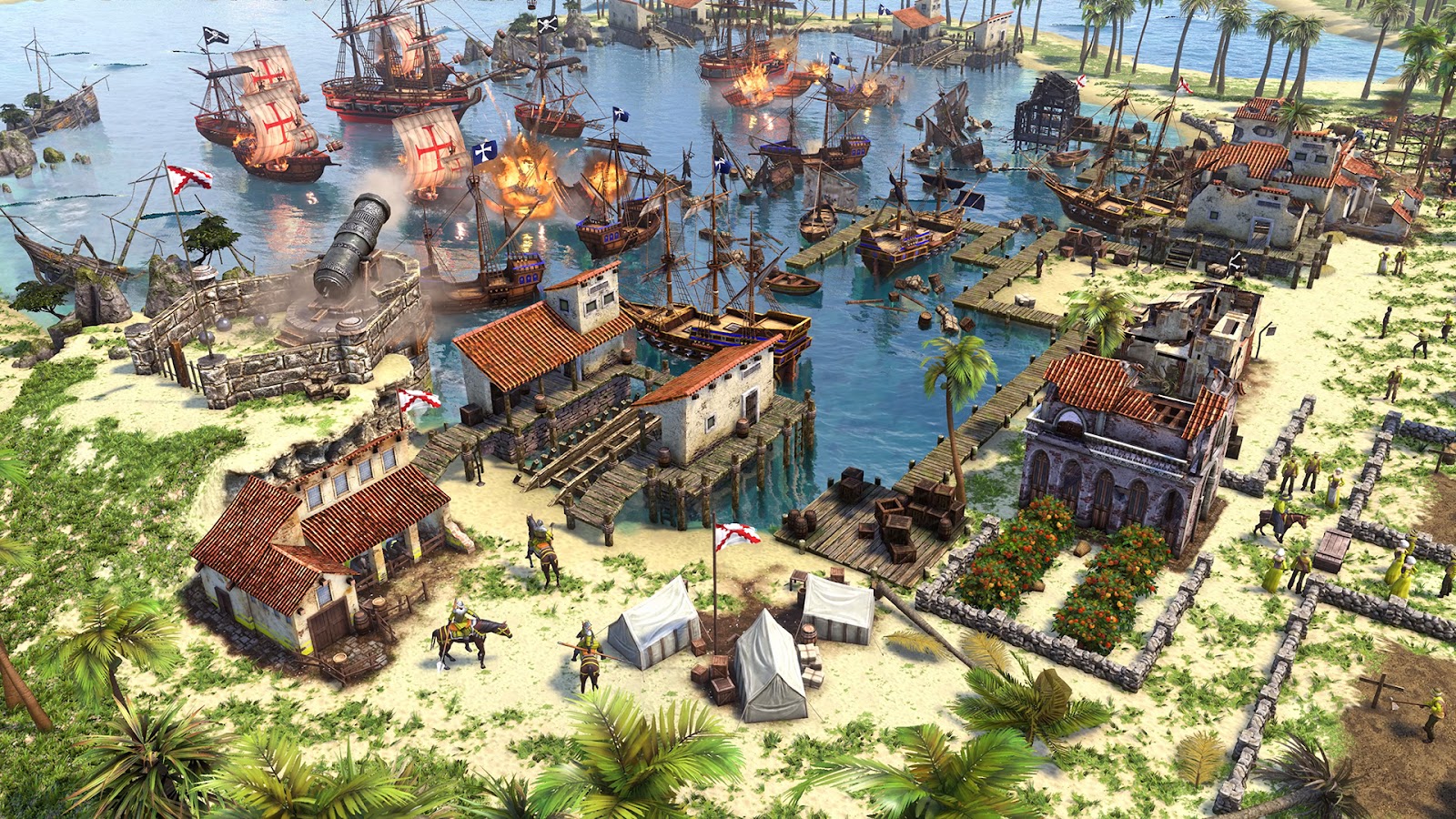 Speaking of teachers, nothing better than learning twice in historic battles. We tested the 1516 Algiers battle, where the focus is greater on defense and you need to manage your barbarian pirates to avoid falling under the Spanish siege. The goals and innovation in this game format are very exciting, serving as a great counterpart to the campaign.

For the creative director, this is a great addition, since, unlike campaign mode, there is a real historical context that does not go into fiction.

Skirmisher and multiplayer cannot be left out either. These are the game modes for you to test your knowledge. Other civilizations, allies and enemies share a resourceful map and you will need to be much smarter in order to win.

One of the coolest news, both for veteran players and for novices is that the strategy of importing improvements from the metropolis is with all the cards unlocked from the beginning, eliminating the several hours of play that it would take to have them all on the deck.

For Adam Isgreen, “this opens up a huge amount of strategic options for players in how they plan their overall strategies, in addition to many other RTS games, especially before the match even starts.” 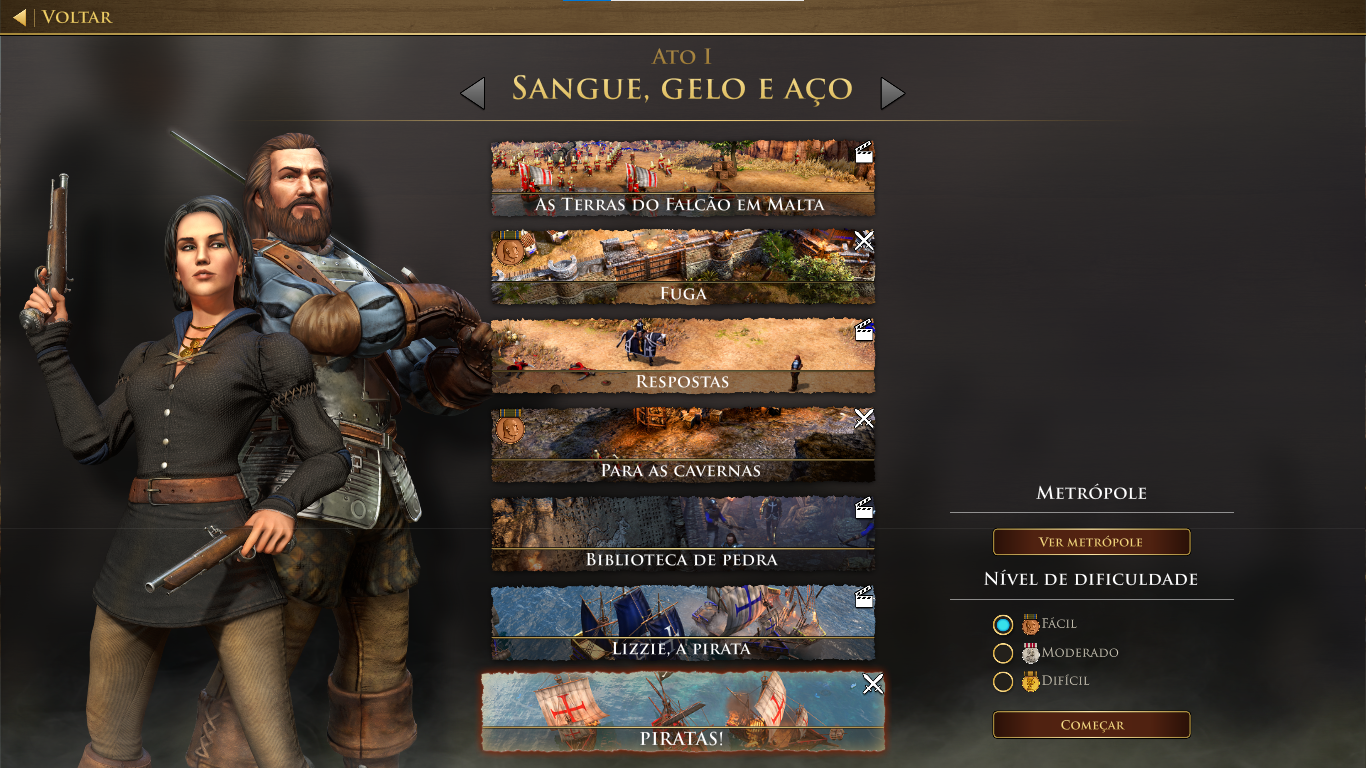 Recreating a cult and successful game is a very difficult task, since it is necessary to understand every detail that gave it this status, correct any problems, but at the same time bring important news that make the remastering worthwhile in addition to the graphics and gameplay.

The franchise Age of Empires and, especially their third game, were responsible for bringing great mechanics, enhancing gameplay and establishing their legion of fans. Bringing the Definitive version of phase III of this universe is a challenge, without a doubt, but the development of previous games had already proved to be a very welcome arrangement. 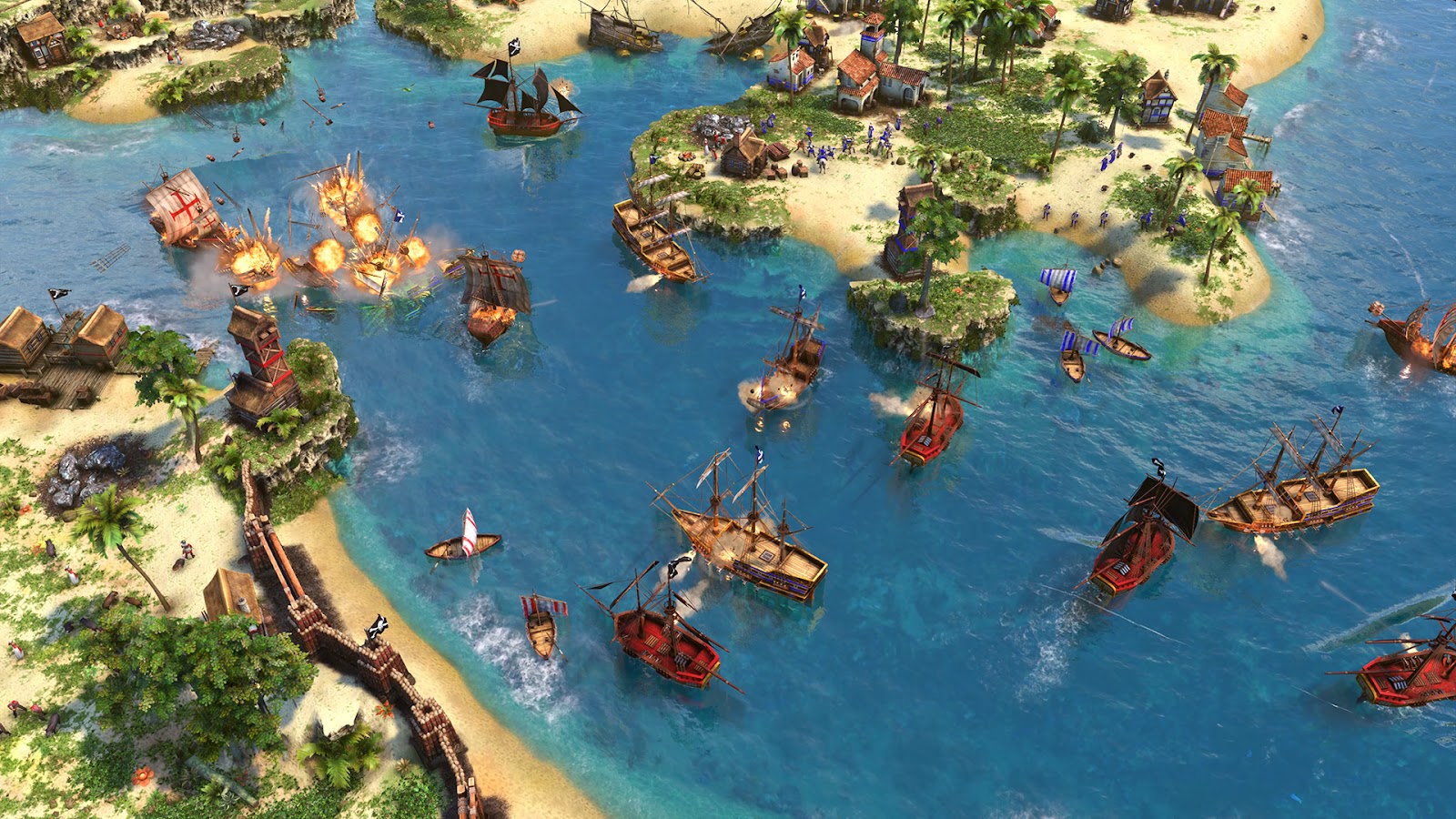 With the help of Age Insiders, volunteer players who are testing the game and giving feedback to the development team, the chances of failure are very small. “We love our Age Insiders. Like some of our most passionate fans, they are able to provide us with another perspective that enables us to make the best game possible. We feel that having an in-house program is essential to fulfilling our central pillar of community and support. “

The final version wants to be big and shows a lot of potential for that in its game modes. The news works and leaves you with a taste of “I want more” when they are over, which shows that it will be a game to play for several hours.

Age of Empires III: Definitive Edition may have understood how a good remaster works, setting the stage for the arrival of the fourth chapter of the saga. What we will need to find out at the launch is whether it is able to give more evidence to the RTS genre, which has lost its glamor over the years. Your main asset may be the visibility of the Xbox Game Pass, which makes room for both old and new players.