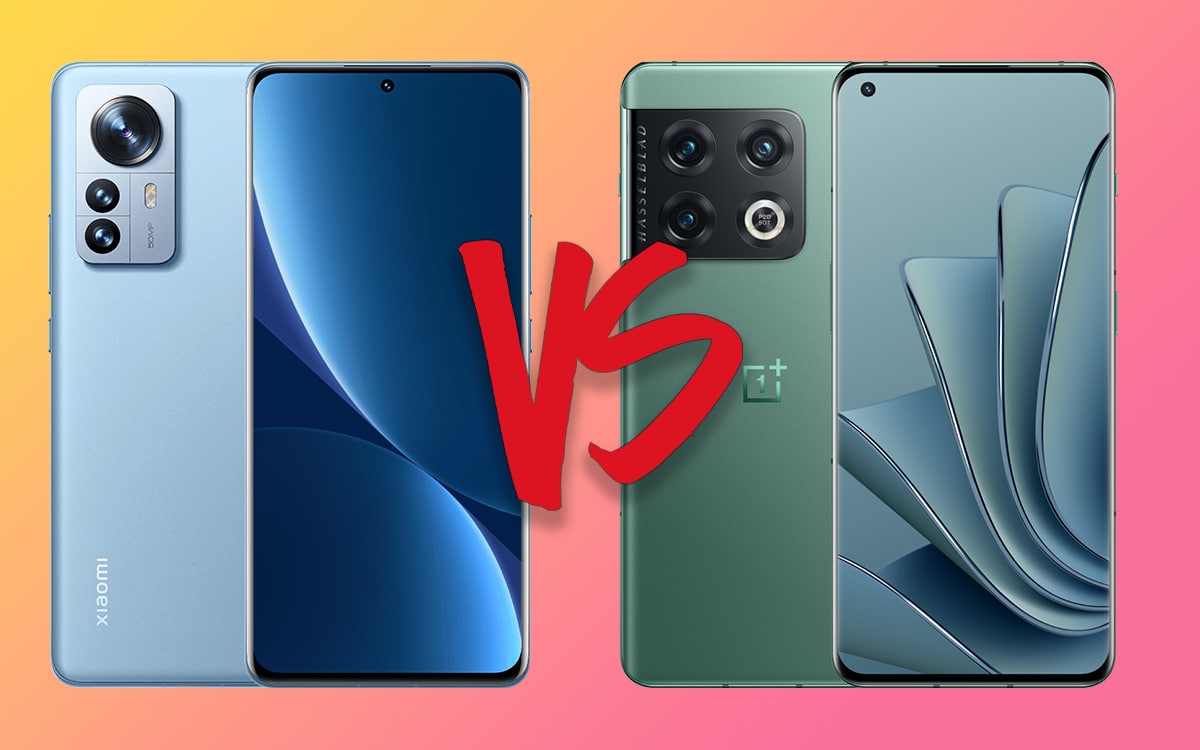 Xiaomi and OnePlus both presented a new high-end smartphone at the start of 2022. The Xiaomi 12 Pro and the OnePlus 10 Pro have a very similar technical sheet, but a few differences could make you lean towards one or more. for the other, we explain everything to you.

Xiaomi presented new Xiaomi 12X, 12 and 12 Pro smartphones on December 28, 2021. The latter embeds all the latest technologies from the manufacturer, and was quickly joined two weeks later by the OnePlus 10 Pro, OnePlus’ flagship for this year 2022.

Without being revolutionary, the two smartphones offer interesting new features compared to previous models. The Xiaomi 12 Pro and the OnePlus 10 Pro are very interesting to compare because of their identical prices in China, both being sold from 4699 yuan (649 euros).

Here is a summary of the technical specifications of the two smartphones. We will analyze these characteristics in more detail later in this article.

Design: the traditional or the atypical

This year, the Xiaomi 12 Pro and OnePlus 10 Pro both adopted a different design compared to their predecessor. Nevertheless, while the Xiaomi 12 Pro is content with a design that we are used to seeing from other manufacturers, OnePlus has decided to take the plunge and offer a rather atypical back, since the photo module is square and overflows on the edge like a Gakaxy S21.

For the materials used, the two smartphones offer Gorilla Glass Victus on both sides, and will therefore be particularly resistant to scratches and falls compared to previous models. Nevertheless, the OnePlus 10 Pro is IP68 certified for water and dust resistance, allowing it to survive splashes and immersion in clear water up to 5 meters for 30 minutes. However, the lack of certification on the Xiaomi 11 Pro does not mean that the smartphone is not protected, but simply that it is not officially.

Both models have stereo speakers, but thee Xiaomi 12 Pro has the advantage of offering two symmetrical speakers on the top and bottom of the smartphone, designed in partnership with Harman Kardon. Like its predecessors, the Xiaomi smartphone will therefore offer a better sound quality than competitors.

The Xiaomi 12 Pro and OnePlus 10 Pro both feature high-end screens made by Samsung, and the technologies used are almost identical. However, some differences remain. The Xiaomi 12 Pro uses a 6.73-inch AMOLED E5 WQHD+ (1440 x 3200 pixels) display with LTPO 2.0 120Hz technology. The latter makes it possible to dynamically vary the refresh rate of the panel from 1 Hz to 120 Hz depending on the content that is displayed.

For its part, the OnePlus 10 Pro offers a 6.7-inch AMOLED E4 WQHD+ (1440 x 3216 pixels) display, which is also LTPO 2.0 120Hz. Since it is an AMOLED E4 screen and not E5, the latter is slightly more energy-intensive. Xiaomi therefore takes the lead in this category, since its screen can even boast of offering up to 1500 nits of brightness, compared to only 1300 nits for the OnePlus 10 Pro.

Performance: top-flight performance on both models

Performance-wise, the two smartphones are identical. Indeed, both use Qualcomm’s new high-end SoC, the Snapdragon 8 Gen 1. The CPU uses a total of 8 cores, including 1 high-performance Cortex-X2 core at 3.0 GHz, three Cortex-A710 cores at 2.50 GHz as well as 4 energy-efficient Cortex-A510 cores at 1.8 GHz. The GPU, the Adreno 730, offers a performance gain of around 30% compared to the previous chip.

Both smartphones come with a minimum of 8GB of LPDDR5 RAM and 128GB of UFS 3.1 storage, and each has a configuration offering up to 12 GB of RAM and 256 GB of storage.

Battery: autonomy at OnePlus and fast charging at Xiaomi

OnePlus and Xiaomi have made different battery choices for their smartphones. Indeed, the OnePlus 10 Pro benefits this year from a 5000 mAh battery, against only 4500 mAh on the OnePlus 9 Pro. The battery is compatible with 80 W fast wired charging which promises to take it from 0 to 100% in just 32 minutes. The wireless charging is once again limited to 50W.

For its part, Xiaomi is offering a smaller battery this year, since it goes from 5000 mAh on the Xiaomi Mi 11 Pro to only 4600 mAh on the Xiaomi 12 Pro. However, the manufacturer has increased the power of wired fast charging to 120W, like the Xiaomi 11T Pro, which allows the battery to be filled in just 18 minutes. The fast wireless charging is also 50W.

The Xiaomi 12 Pro uses more power-efficient components and charges faster, but the OnePlus 10 Pro’s extra battery capacity should still allow it to offer slightly longer battery life. Finally, good news, unlike Samsung or Apple, Xiaomi and OnePlus have decided to keep the power adapter in their smartphone box.

Camera: the two smartphones are complicated to decide between

On the photo side, Xiaomi and OnePlus have both bet on a three-camera setup with a main sensor, an ultra wide-angle sensor as well as a telephoto lens. However, the sensors offered are different. Indeed, we find a huge 50 MP IMX707 main sensor of 1/1.28 inch with 1.22 micron photosites on the Xiaomi 12 Pro, against a capturer 48 MP IMX789 1/1.43 inch with 1.12 micron photosites on the OnePlus 10 Pro.

The ISOCELL JN1 50 MP ultra wide-angle is identical on both devices. As a reminder, this is the smallest 50 MP sensor on the market with photosites of only 0.64 microns. The OnePlus 10 Pro has the advantage of offering an ultra wide-angle mode with a very wide field of vision of 150 degrees, a fisheye mode as well as a mode with a narrower field of vision of 110 degrees.

The Xiaomi 12 Pro’s telephoto lens is another 50 MP JN1 sensor offering 2X optical zoom perfect for portraits, while the OnePlus 10 Pro relies on a smaller sensor of only 8 MP, but which offers a 3X optical zoom. Finally, both smartphones use a 32 MP front sensor housed in a punch, in the upper left corner on the OnePlus 10 Pro and in the center on the Xiaomi 12 Pro.

The Xiaomi 12 Pro therefore seems to have the advantage in this category thanks to its three large 50 MP sensors, but the OnePlus 10 Pro offers some interesting modes with the ultra-wide-angle sensor to let your creativity flow. Some users might also be convinced by the “OnePlus Billion Collor” technology designed in partnership with Hasselblad, which allows the OnePlus 10 Pro to capture shots with very natural colors.

Software: Android 12, but with different overlays

The Xiaomi 12 Pro and OnePlus 10 Pro both released on Android 12, but they use the MIUI 13 and OxygenOS 12 overlays, respectively. Xiaomi unveiled MIUI 13 alongside its smartphone in China. This year, the new version of Xiaomi’s home overlay is all about fluidity, customization, and promises to better adapt to tablets.

For its part, OxygenOS 12 promises an experience closer to stock Android, where MIUI 13 really deviates from it. Manufacturers both promise 3 years of major Android update and 4 years of security patches on their smartphone, so that’s draw.

Identical prices in China, what about France?

The OnePlus 10 Pro and Xiaomi 12 Pro have both been marketed from 4699 yuan (651 euros) in China in their configuration with 8 GB of RAM and 128 GB of storage. For the moment, we do not know at what prices they will be offered in France, but it will be interesting to see which of OnePlus or Xiaomi will be more aggressive in our market.