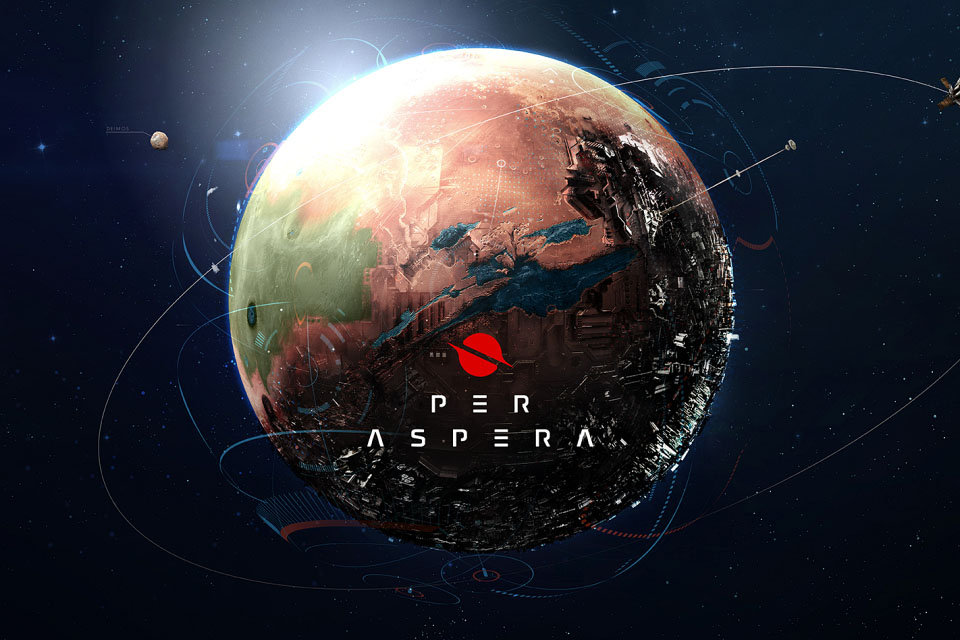 My first contact with Per Aspera occurred a few months ago, when I wrote the preview here for Voxel. During the 4 playable hours, it was possible to notice the care that Argentines from Tlön Industries had when creating the game. With the support of Raw Fury it was possible to cut this precious stone that the company had in hand.

For those who haven’t had the opportunity to read my preview, I said that the game had a potential to innovate the genre. Now, with more than 20 hours in the game I am sure they have achieved something unique in the market. It may seem like a simple game of terraforming and automation, but it goes far beyond that. That’s what I’ll try to explain in the next few lines.

We live in a crucial moment in our lives, where we are dependent on a vaccine to overcome the new coronavirus. Technological and scientific support, and especially personal interests, can be a good comparison of what we will find in the game.

But it will not be just that. Don’t limit your thinking to just them. There are several ingredients that will be part of the adventure, such as psychological factors, in addition to the collective unconscious, equipped with alien or conspiracy theories.

It is quite complex to explain everything Per Aspera allows the player without writing a few spoilers, but rest assured, I will do my best not to spoil your pleasure when you get your hands on the title.

The beginning of your journey on the Red Planet will depend on the capture of ores and the manufacture of items. The automation of the process will be done by you. Everything that happens can seem a little complex for players who are not used to games of this style. I say this, because there is no basic tutorial to teach. Just a sequence of goals to be made, which makes you have to think a little.

After the first process, which refers to the capture of raw material, the great crossroads of AMI will begin. She will have to reconcile all of her work with the arrival of the colonists and the first phase of terraforming.

The first phases to make Mars habitable, go through pure science and mainly through decision-making, which can impact life on the planet forever. Your first task will be to air-conditioning it, using different devices.

Some of them can be harmful to the planet, others cannot. You can use nuclear bombs or create mirrors that will remain in the atmosphere to melt the polar caps, thus generating CO2 in nature. One is more time consuming and more expensive. The other is faster, cheaper, but harmful to the future of humanity. The big question is: create a place different from the one built by human beings here or try something totally sustainable? All decisions pass from AMI to you. Everything will be defined with a click of buttons. In addition to the memory existing in artificial intelligence, which is based on what happened on Earth, there is your thinking of what is best to carry out the mission.

With the improvement in temperature, the second part of terraforming passes through the balance of atmospheric pressure. Here you will also have to choose paths, such as using greenhouse gases, or perform less harmful processes to help colonize Mars.

Per Aspera it changes overnight. He is no longer a Factor, that is, an automation game, to be an adventure of decisions, with ingredients of pure psychoanalysis, mainly, to know who you really are.

When you least expect it, you will notice that the two lines of play follow in parallel and it will be necessary to cover your intellect even more to try to control all the actions present in the game. As I explained in the lines above, Per Aspera does not have a tutorial that teaches the player to act on Mars. This ended up leaving room for some problems. The first is the lack of understanding of everything that can be done and, sometimes, what to do to continue the adventure.

Much has been improved since the preview. The menus are better, the characters are more alive and mainly the insertion of green and red arrows in the raw materials, which help to know how their production is going to meet basic needs.

Other items do not have a clear understanding, such as the functioning of the electric power network and the quality in the process of manufacturing and removing ore from the earth. In some cases a low percentage of production appears, but you will have no idea why it occurs here, no matter how hard you think about a solution. This is where an important question comes in, which can symbolize the presence of bugs or their intellectual limitation. In this case, mine. 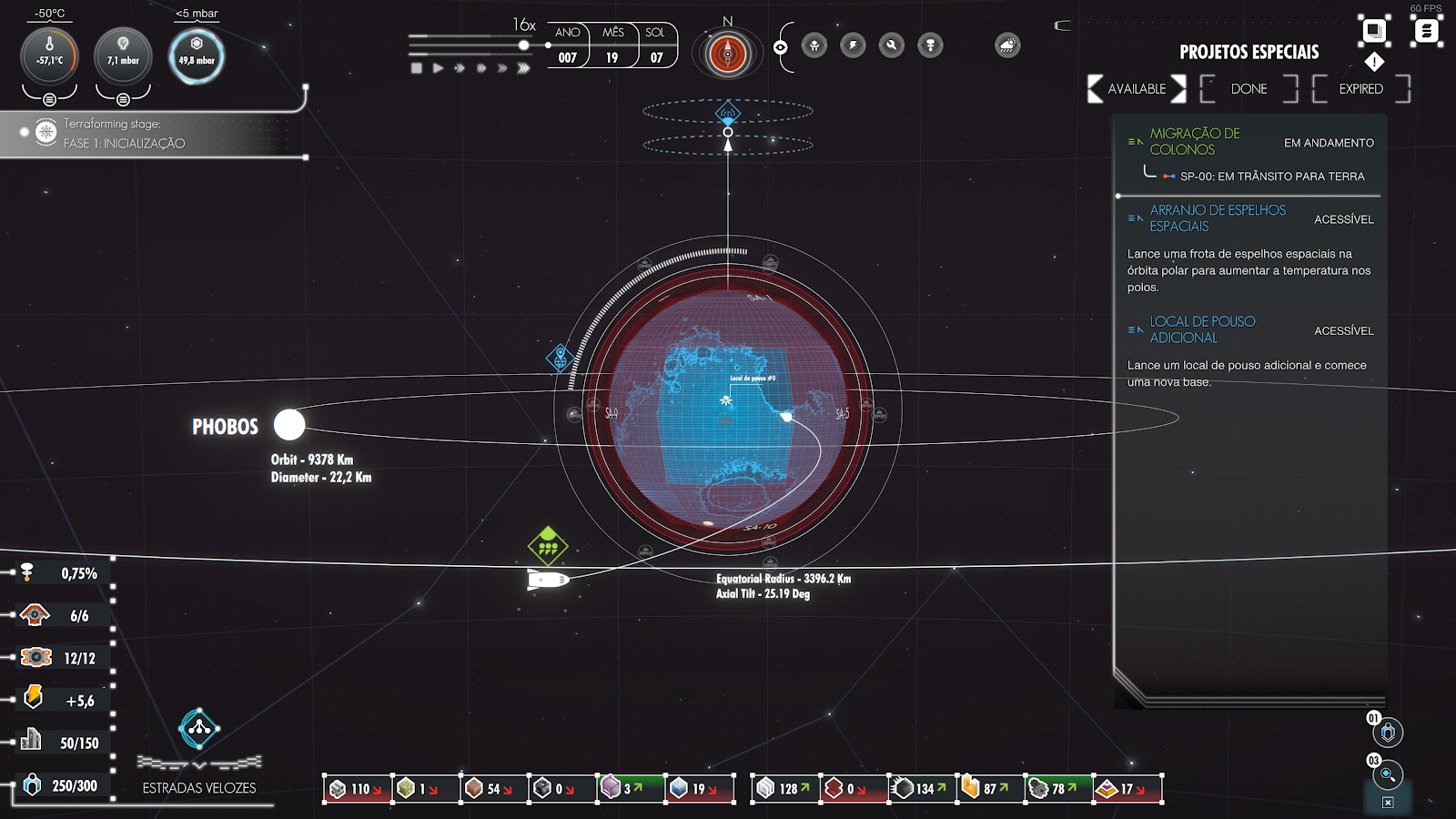 In addition to the normal game view, all major actions, such as arranging satellites, monitoring the arrival of settlers and developing the terraforming system will be done by a planetary camera. The company could have paid more attention to details in this area. A little more information and usability is needed so that everything can be done in a more intuitive way.

Another point left open is the upgrade of their work bases and colonies. After you develop specific technologies to improve your base, you will need to destroy the old ones to build the new ones. Get ready to waste some time on this part. It would be much more intelligent to place an automatic upgrade on the bases built to facilitate the whole process.

Several conflicts will appear in Per Aspera, many of them without you noticing. The most notable refers to natural disasters, such as meteors and sandstorms. They directly influence the built bases, and can damage them. The problems are quite random, not causing much problem in their management.

Other opponents may influence your adventure in general. The first of these is insecurity, which will make AMI always think if it is doing something good for her or for the colonists. At certain times, it even personifies its non-existence, limiting itself to being a machine.

The second is the settlers. Research centers will only operate at an accelerated rate if their emotional state is well. Without human beings, their technologies will not be developed and their entire mission may fail.

Per Aspera is excellent! As much as you have some flaws in the management and in explaining some details, you can solve the problems if you have the time and time to spare. However, this may affect more casual players. Today, I am sure that the game developed by the Argentines has everything to open up a range of future options in the management games market, paying attention to several factors and encompassing different genres and, until then, impossible to go together.

Per Aspera was kindly provided by Raw Fury to carry out this analysis.

“Are you ready to build a habitable world for human beings?”