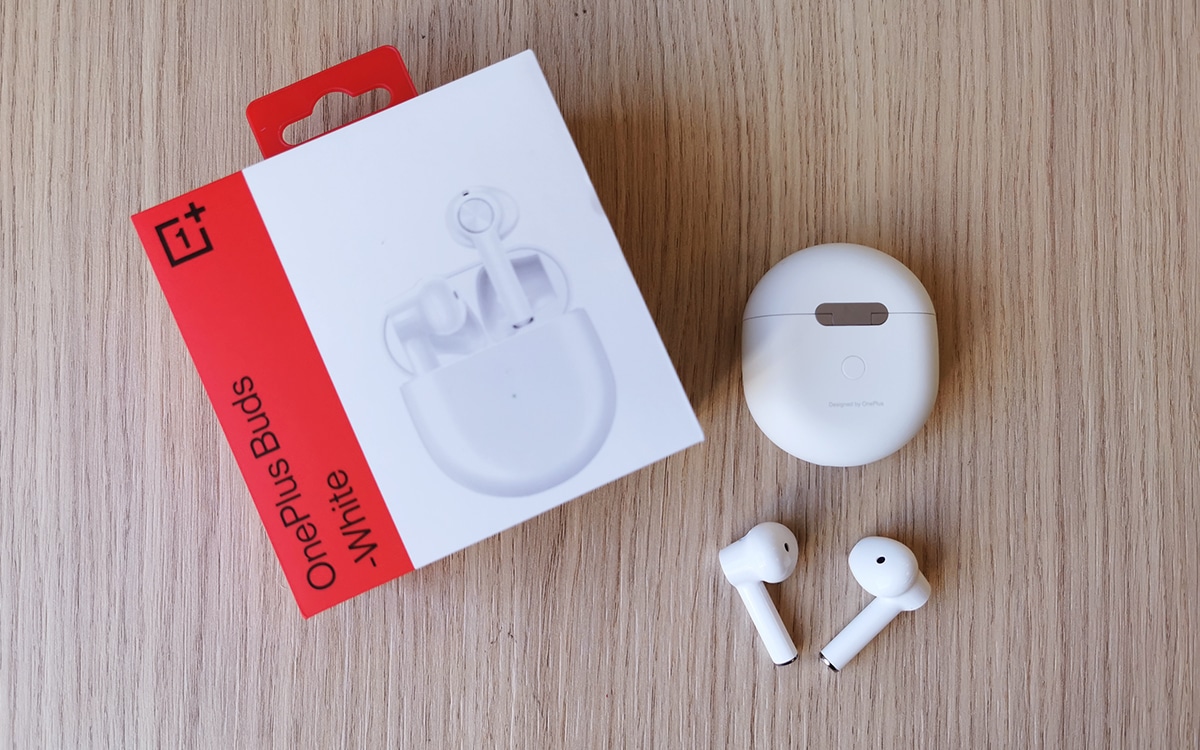 After three trials in the world of wireless headphones, OnePlus Buds is now embarking on that of “true wireless” headphones. The OnePlus Buds are two small earbuds that look suspiciously like Airpods, but come in at a much lower price. Can they still compete with their main head competitor? Answer in our full review of the all new OnePlus Buds.

In 2018, OnePlus unveiled its first wireless headphones, the Bullets Wireless. The following year, the Chinese manufacturer did it again with a second iteration of the latter. Then a third version, the Bullets Wireless Z, was recently announced. OnePlus returns this time with true wireless headphones : the OnePlus Buds are two small headphones launched in parallel with OnePlus Nord, the new mid-range smartphone from the Chinese brand. With this new model of headset, OnePlus is therefore temporarily moving away from “wireless” headphones (but which still have a cord connecting each earpiece) to focus on “truly wireless”.

On the other hand, while OnePlus is now one of the brands to rely on when it comes to telephony, this is not yet the case for everything related to audio. Despite several models with certain qualities, OnePlus has yet to establish itself in the headphone market like Apple or Samsung did before him. This 4e will it be the right attempt? The qualities of the OnePlus Bud, and especially their low price, will they succeed in seducing fans and less fans of the brand? We have tested the new OnePlus true wireless headphones from every angle for several days and are here to share all our conclusions with you.

If you’re familiar with other true wireless headphones, including Apple’s, you shouldn’t be too disoriented. With their color and their two small stems that extend downwards, the OnePlus Buds are reminiscent of the Airpods of the famous Cupertino brand. When you take the Buds out of their holster, it’s impossible not to think of their predecessors or their countless copies like Huawei’s Freebuds. Seeing them and their charging case, we also think of the Vivo TWS Neo, which is not a surprise since the two brands (OnePlus and Vivo) are linked by the same parent company.

What more can be said about their design if it is not that they are neither unsightly nor of exemplary aesthetics? The two ear cups do not shine with their originality, their design being ultimately very classic. These headphones are ultimately quite discreet for anyone who has already had to deal with Airpods or the like and they are rather light, since they weigh only 4.7 g each. 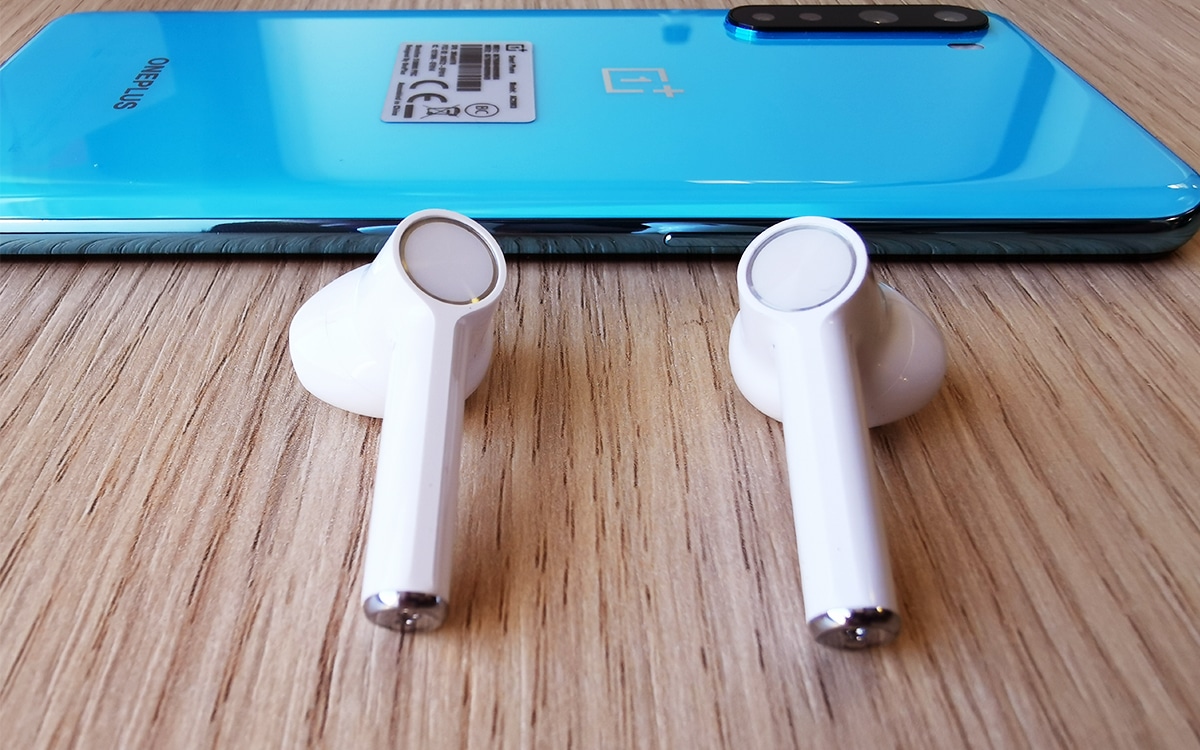 However, we can deplore theno eartips offering a better fit in the ear canal. As such, the Buds compete more with Apple Airpods than Pro Airpods. But in terms of price range, they do not play in the same court either, which explains this. On the other hand, if we compare them to models like the Cambridge Melomania 1 which are worth 10 euros more, there is something to be slightly disappointed, since the Cambridge models do indeed have small tips (and incidentally offer even better autonomy).

Do not sulk our pleasure, because during our different test phases, the OnePlus headphones were revealed very comfortable, so much so that we quickly came to forget their presence. During one of our test sessions, we used them for 5 straight hours without ever leaving them, and we have to admit that we never felt the slightest discomfort, the slightest pain. Good point, then. However, take into consideration that headphones may be unsuitable for “small ears” (those of children or young adolescents), their shape so that they do not fit fully into the ear canal.

The OnePlus Buds come with a small case that acts as a charger. White like the headphones that were provided to us by OnePlus, the case therefore allows you to charge the Buds, but also to pair them with a smartphone via a small button on the back. The case is 37 g and, thanks to its rounded shape, can easily slip into the pocket of the pants. In the Buds cardboard box, there is also a small cable USB-A> USB-C dedicated to the charging case. However, no charger is provided. 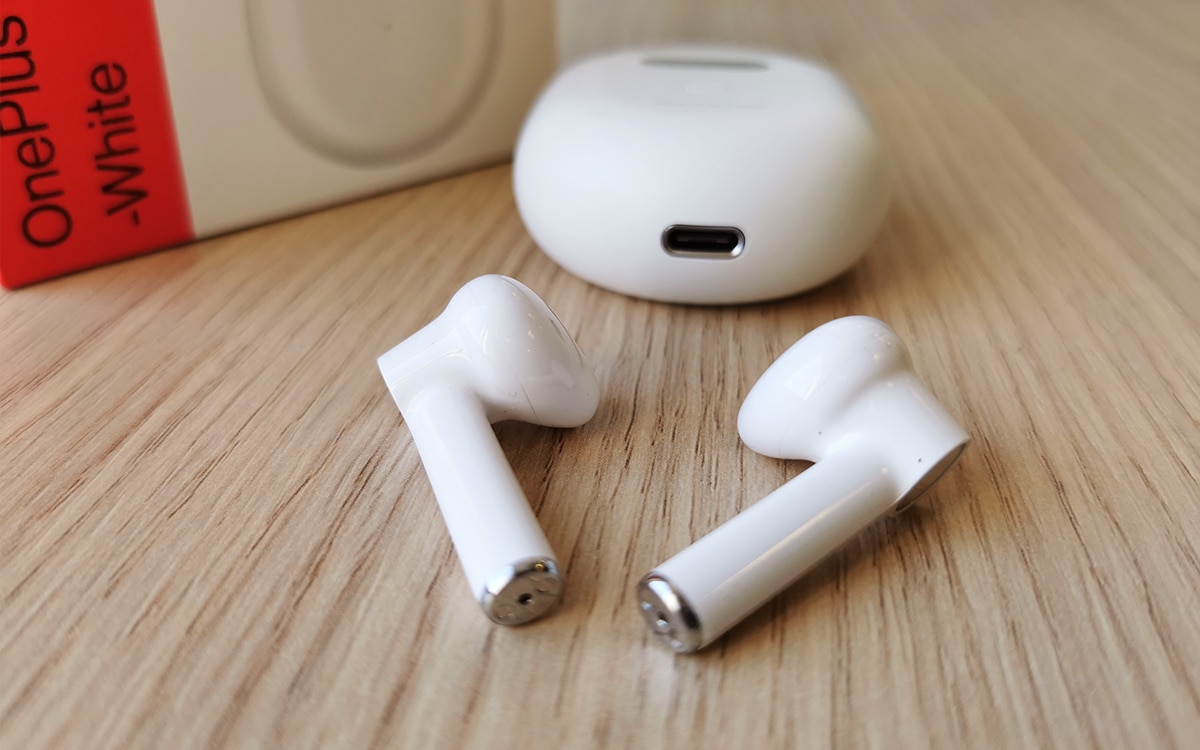 OnePlus announces a charging time of 10 minutes for 1 hour of listening. OnePlus also ensures that its headphones offer, once fully charged, an autonomy of 7 hours of music listening. The box, which has a battery of 430 mAh, meanwhile, offers a total of 30 hours of battery life.

Are these manufacturer data correct? The answer is yes. We tested the small accessories lengthwise and indeed found that they were indeed able to last 7 hours, or even a little more in our case (7:08 in our case, the volume being set at 50% during our test phase) . Results that allow the Buds to be among the headphones that offer one of the best autonomy seen to date, especially if we take into account the 30 hours of total autonomy mentioned above.

Again, we wanted to test what OnePlus said and were not disappointed. After 4 recharges at different times of the day and night, the small headphones are indeed able to last as long as advertised by their manufacturer. Verification done, once again, the small accessories even last a little: 30:17 in our case, still adjusting the volume to 50% on our smartphone. In the end, the headphones have a good battery life, even if models like the Cambridge Melomania 1 (again!) Can last 6 additional hours.

Welcome features and others forgotten

First observation: Buds do not have any Android or iOS application to manage them. Understand that the OnePlus Buds pair with a smartphone or a computer, and that it is the management features of these devices that allow you to control the headphones. Too bad, we would still have liked a small Android application allowing, for example, to control the equalizer or to assign a specific command to the touch surface. In fact, this last possibility does exist, but it is necessary to go through a OnePlus smartphone to have access to it. And it’s not a full-fledged application, just a feature of the OxygenOS overlay. 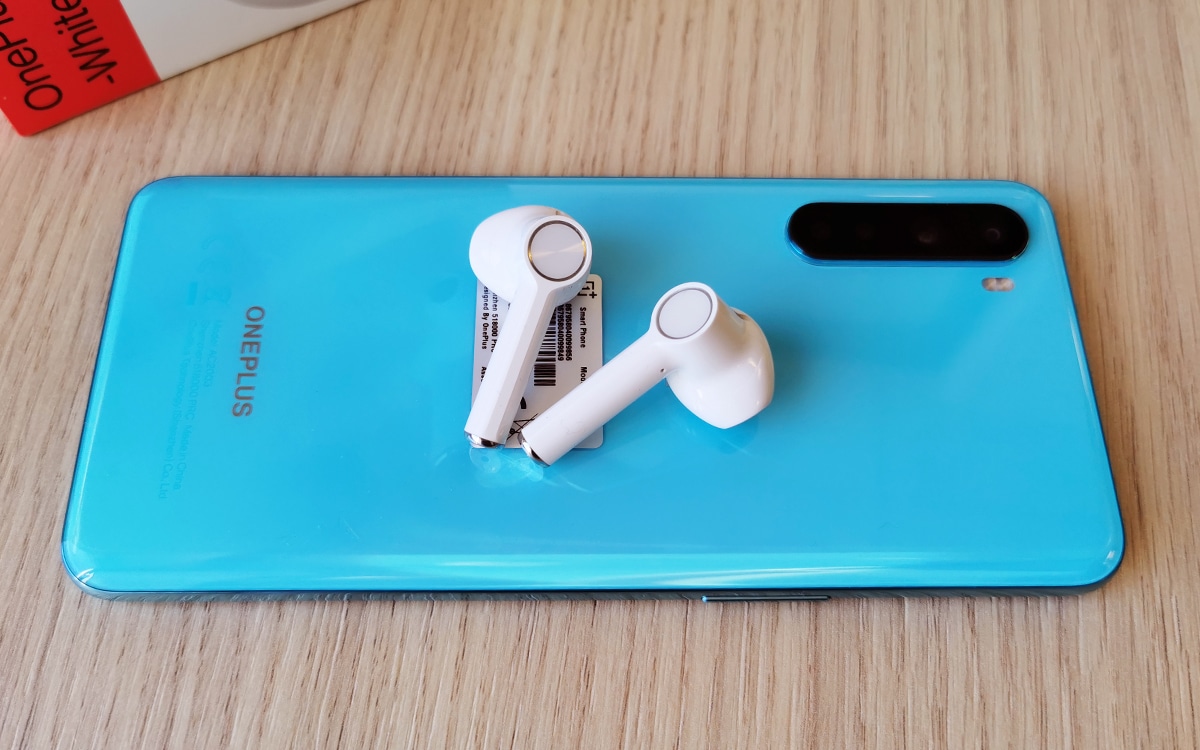 On the usage side, the pairing between the smartphone and the headphones is carried out in ” fast pair ”, Which allows the headphones to be connected to a smartphone in 2 seconds. Double-tap the small touchscreen on the headphones to listen to the next track on the playlist. Cannot pause listening to music through this, but you only need to remove one of the two earbuds from the ear to stop playback.

The fact of stopping reading only by removing an earpiece is a rather positive point that is not always found in competing headphones. Playback of the current track can be instantly restarted if you turn the Buds back on within 3 minutes. Nevertheless, we have observed on a few occasions a little bug : One of the two earphones does not always pause and playback therefore continues in each of the two earphones. While this issue only occurred on rare occasions throughout our testing period, we needed to mention it.

Double tapping on one of the two earphones during a call goes off hook. And to hang up after the conversation is over, double-tap one of the Buds. As mentioned previously, provided you own a OnePlus 6 or a higher model, it is possible to customize this double tap on the surface of the headphones and ensure, for example, to pause a song, to return to the previous music. or call the voice assistant. It is also through this that it will also be possible to update the firmware of the device: without a OnePlus phone, no salvation to update the software part of the small headphones. 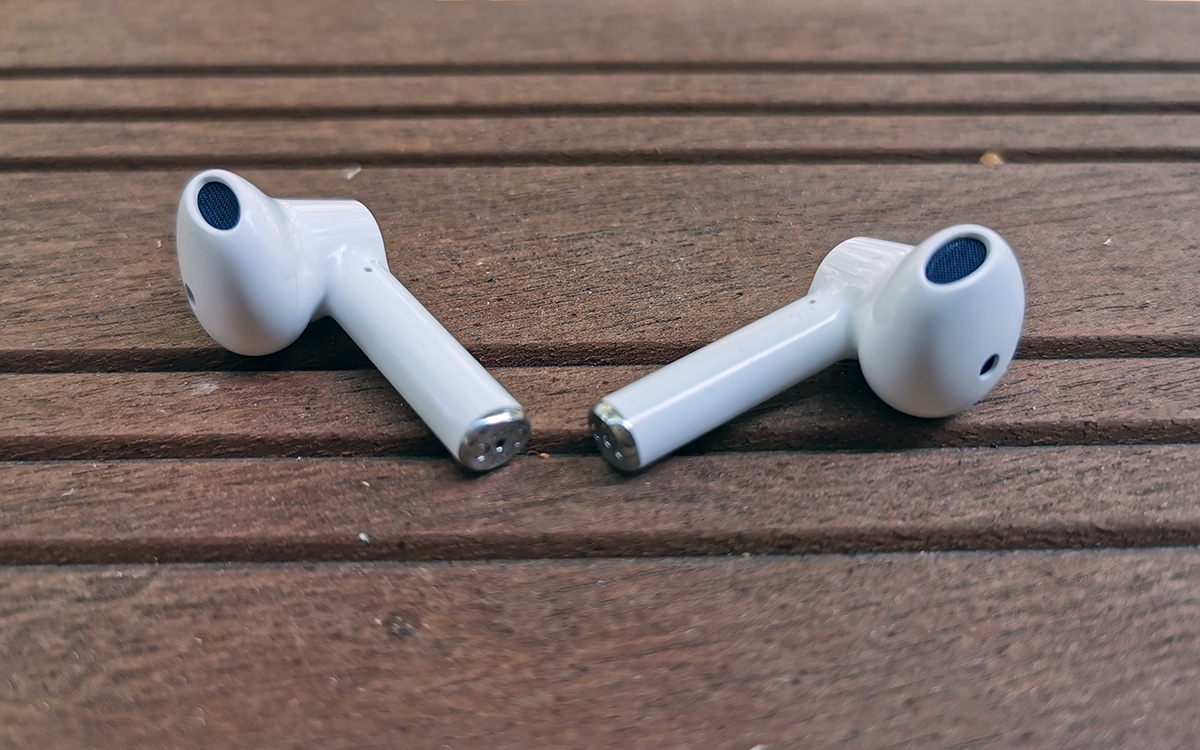 While OnePlus is mostly a telephony expert, its attempts to break into the audio market leave a rather half-fig, half-raisin impression. The first Buletts Wireless of the name had seduced us, while the second version had left us unmoved. So what about these true wireless Buds? The overall impression of the audio quality of these headphones is quite good. Note, however, that the two small accessories of OnePlus support AAC and SBX formats, but not aptX.

Some may reproach them for boosting the bass a little too much, but the high frequencies (singing in particular) remain fully audible. On the other hand, those who would have preferred more bass or treble will be at their expense, since there is no application to adjust the audio settings, as mentioned above.

While the headphones don’t offer active noise reduction, they do have a little passive isolation. You will therefore hear the small slamming of the door, the cars passing in the street, but you will be isolated enough not to be subjected to conversations in the metro (for example). Note that this feature is enabled no matter what, and cannot be disabled. 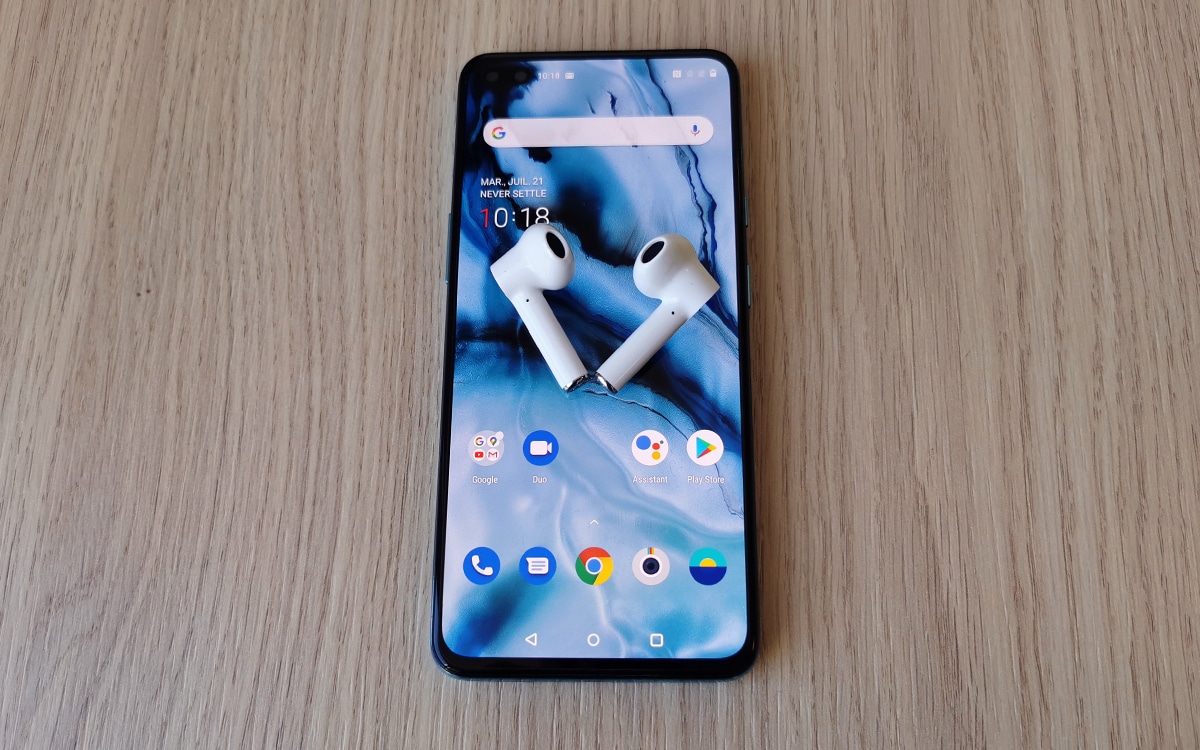 In telephone conversation mode, vocal reproduction is very good, whether for the caller as the called party. During our various calls, we only noticed once: a metallic voice problem, while the sending smartphone was located less than ten meters next to the one receiving the call ( closed doors, no echo). Let’s put it down to the maybe bad phone reception that day, because for the rest, the sound during a call is perfectly audible for both parties.

OnePlus provides a listening radius of 10 meters between the access point (smartphone, PC, TV, etc.) and its headphones. In fact, and this is quite a positive point, this distance can reach 20 meters. Enough to continue listening to your music while going to get your mail without having to take your smartphone, for example (unless your apartment is located upstairs, of course). 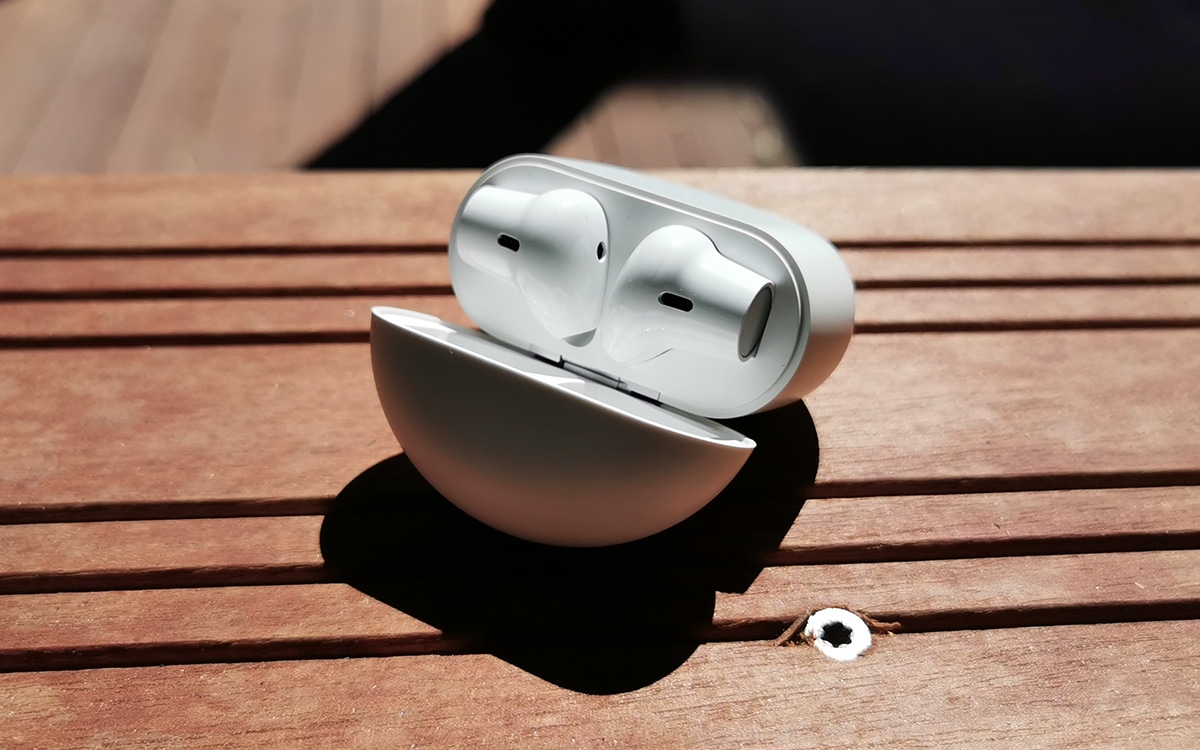 In conclusion, do we fall for it or not?

Displayed at the price of 89 €, Buds are available in 3 colors: White, Grey or blue. Just like the OnePlus Nord marketed at the same time as them, the Buds are sold at a super competitive price against the competition. For comparison, Apple’s Airpods are officially worth $ 179 (they can still be found around $ 140).

Are they doing better or as well as their competition, whether it’s Apple, Huawei, Samsung or the others? On some points, not really: we regret the lack of a dedicated application, which does not allow precise adjustment of the mids, bass and treble. Also, some settings cannot be specified when double-tapping the touch surface of both earbuds. And even if we use a OnePlus smartphone, which offers more freedom, it is impossible to deactivate the ambient noise reduction. This means that you have to always remove one of the two earbuds or pause playback via the phone each time someone speaks to you. 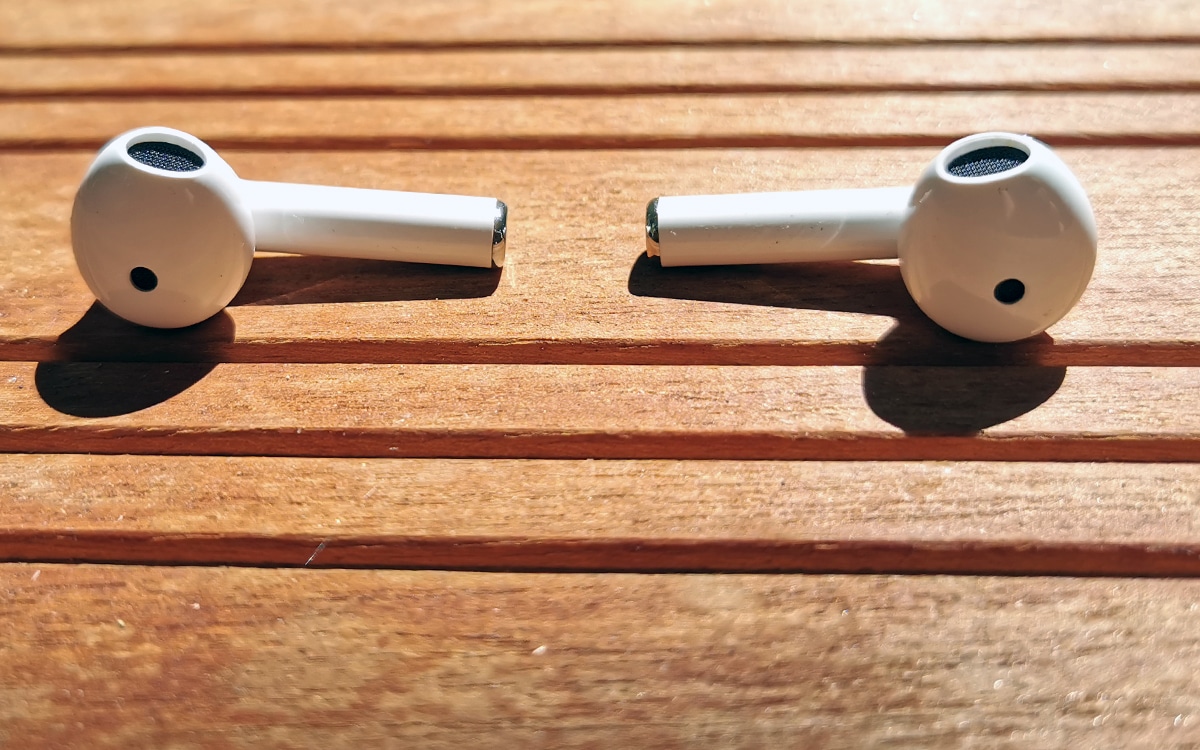 On the other hand, they are doing quite well on other points: their sound quality is frankly very correct, they have a stop function as soon as one of the headphones leaves the ear, they take advantage of a comfortable autonomy, either individually (7 hours) or by using their charging box (30 hours in total) …

Here are two small headphones that finally pleasantly surprised us. Admittedly, they are not free from defects, but at less than 90 €, difficult to find better. A first draft in the world of true wireless signed OnePlus rather successful, despite everything!