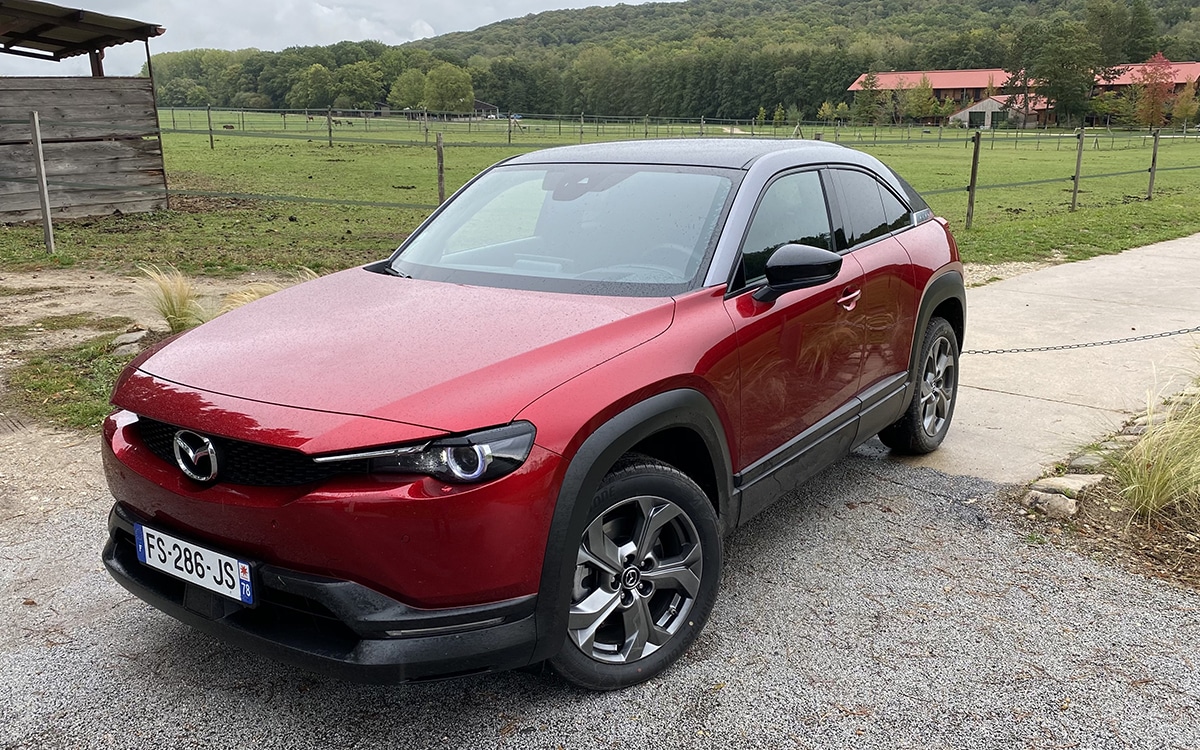 The energy transition is an obligation for all manufacturers. Mazda is no exception to the rule and launches its very first electric car. A rather atypical SUV that we were able to test.

We won’t teach you anything by telling you that Mazda, like other manufacturers today, is accelerating its energy transition with the aim of reducing its emissions. Indeed, the standards set by the European Union in terms of CO2 emissions now impose an average of all cars sold that must not exceed approximately 95 g / km. Where appropriate, the fines are expected to be particularly steep for manufacturers, who have no other solution than to offer hybrid and especially electric cars in their ranges. 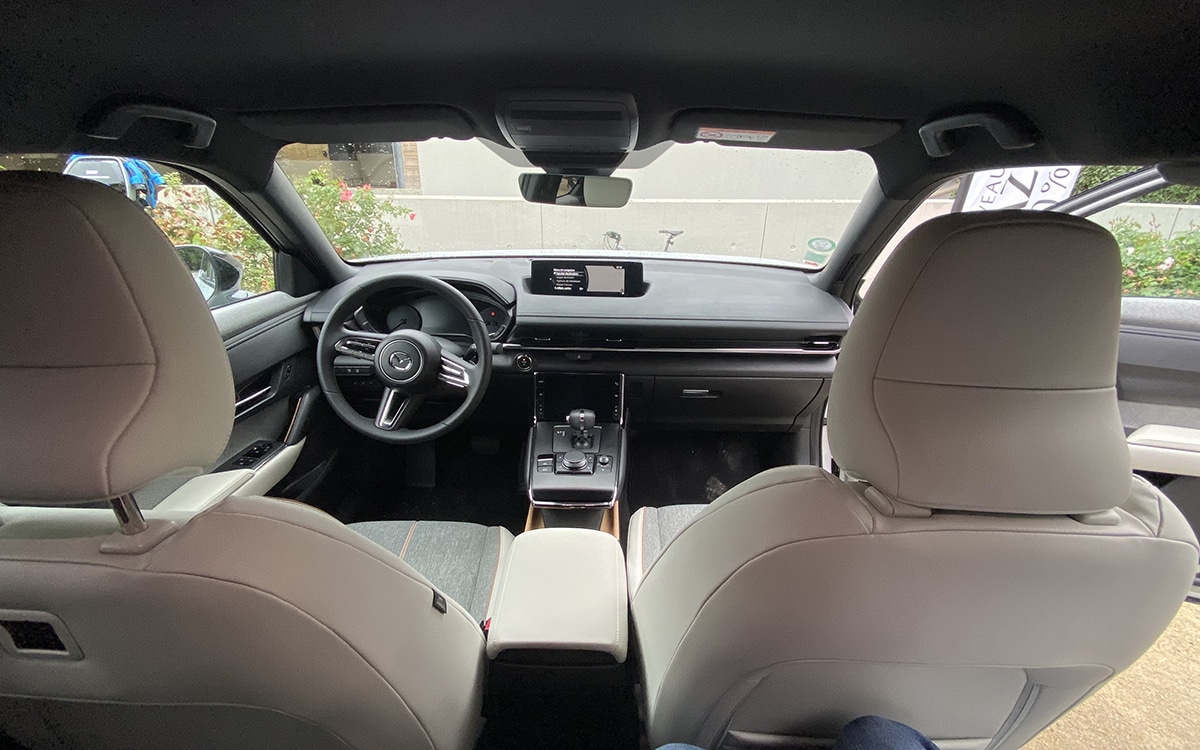 According to Mazda, the reduction of the environmental footprint must be done from well to wheel to recycling. The manufacturer thus anticipates a reduction in emissions announced by 50% between 2010 and 2030. An objective which therefore necessarily involves the design of electric ranges, the first representative of which is now available.

Symbolically baptized Mazda MX-30, in reference to the brand’s models which prefigure a new approach, the brand’s first electric car takes the form of an SUV which today represents the most buoyant market segment. This is not necessarily the most suitable form factor for an electric model, which must be as aerodynamic as possible in order to optimize energy consumption, and therefore to maximize range. However, as always at Mazda, we don’t quite do things like the others either. 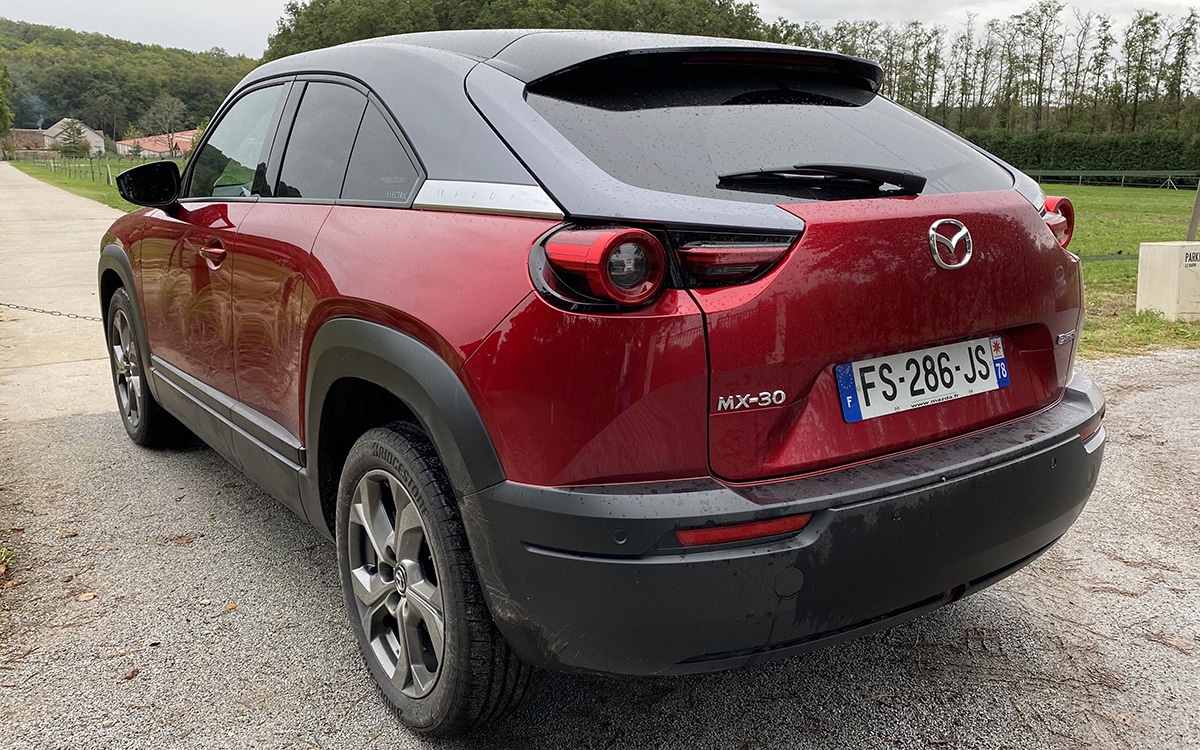 Modest range for the Mazda MX-30

During our test day in Ile de France, Covid obliges, Mazda said it straight away: the Mazda MX-30 is not intended to take you on vacation to the other end of France. The specifications were therefore clear. Indeed, from the first stages of the design, the manufacturer aimed to offer an electric vehicle intended for urban and peri-urban use. A car supposed to become the second vehicle of the household (a household that has the means we grant you), and which should above all be able to cover 48 km traveled daily on average in Europe (38 km in France). 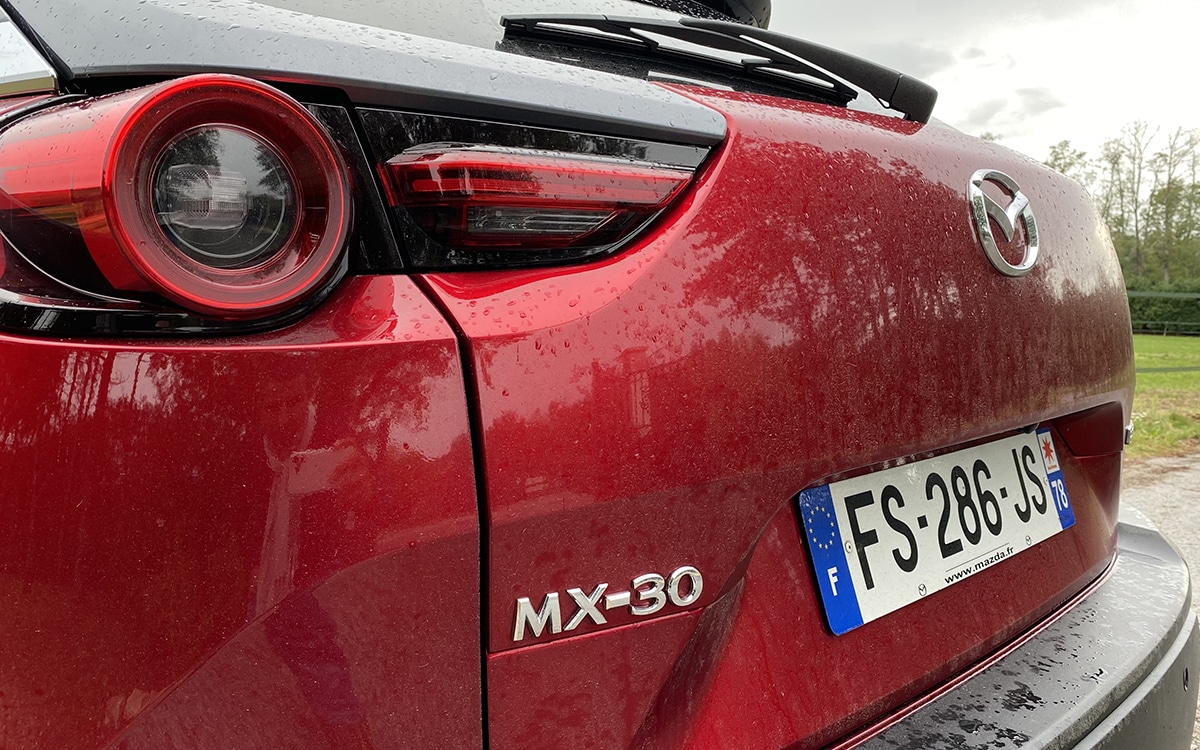 So the Mazda MX-30 is a mid-size SUV that is equipped with a 35.5 kWh battery. A relatively limited useful capacity which is reminiscent of another electric car from the land of the rising sun: its cousin, the Honda e. The Mazda MX-30’s battery thus displays a lower capacity than most electric city cars such as the Renault Zoe (52 kWh) and the Peugeot e-2008 (50 kWh). Or the Kia e-Niro which displays a similar size and which is available in two versions of 39.2 and 64 kWh for the best equipped model. As a direct consequence of this choice, the Mazda MX-30 unsurprisingly announces a WLTP range of 200 km in mixed use. The SUV will be able to push up to a little over 250 km in the city thanks to its braking energy recovery system. But such a choice does not have all disadvantages. Indeed, the first electric car from Mazda can make other arguments such as its habitability, its finish and especially… its price as we will see below. 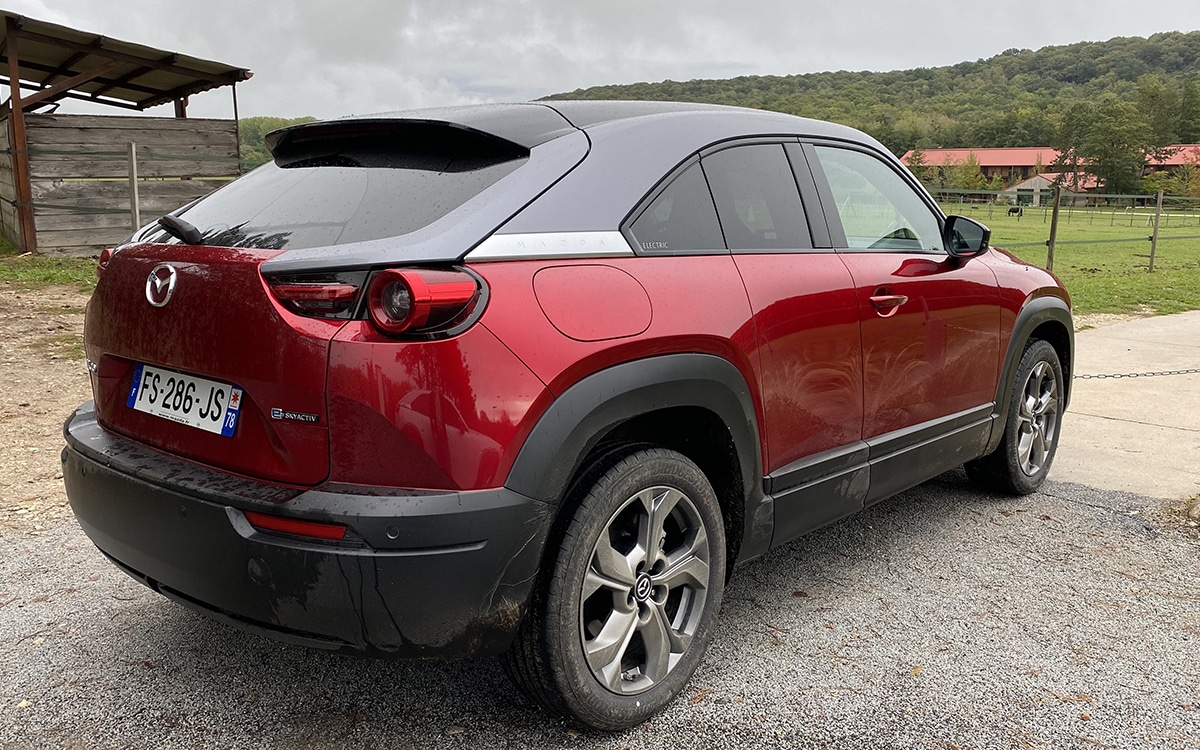 The drums, which is cooled by a liquid system, displays a weight of 310 kg out of the 1,645 kg displayed by the Mazda MX-30. By its capacity, it only needs 36 minutes to go from 20 to 80% load on a direct current (DC) terminal. Admittedly, these are figures similar to other electric cars that are available today, but they are reached here on a terminal with a maximum power of 50 kW. Another good point for the Mazda SUV, a three-phase on-board charger is available which once again confirms its urban vocation with a configuration more suited to the terminals and other Wallboxes available than the solutions on the highway.

At first glance, the MX-30’s parentage with the rest of the Mazda lineup is obvious. Indeed, the SUV also incorporates the Kodo design elements (the soul of the movement) which have been so dear to the brand for several years. The characteristic clean lines are therefore in order, as is the two-stage grille which is both hollow and thinner. Funny detail, the latter is still airy despite the electric motor. There are also the small round lights which give the visual signature of the brand to the vehicle.

In addition, the identity of SUV is fully assumed. And all the more so since the Mazda MX-30 is fitted with 18 inch rims. Yet these give the impression that the wheels are smaller in size, due to the imposing wheel arches that could practically accommodate 21-inch rims.

In profile, Mazda MX-30 looks like a coupe. Even more surprisingly, the car only exhibits a single handle on each side, even though it is indeed a five-door. This is one of the other differentiating elements of the electric SUV. Indeed, the manufacturer has opted for opposing doors, a solution rather rare nowadays and reminiscent of the Mazda RX-8. 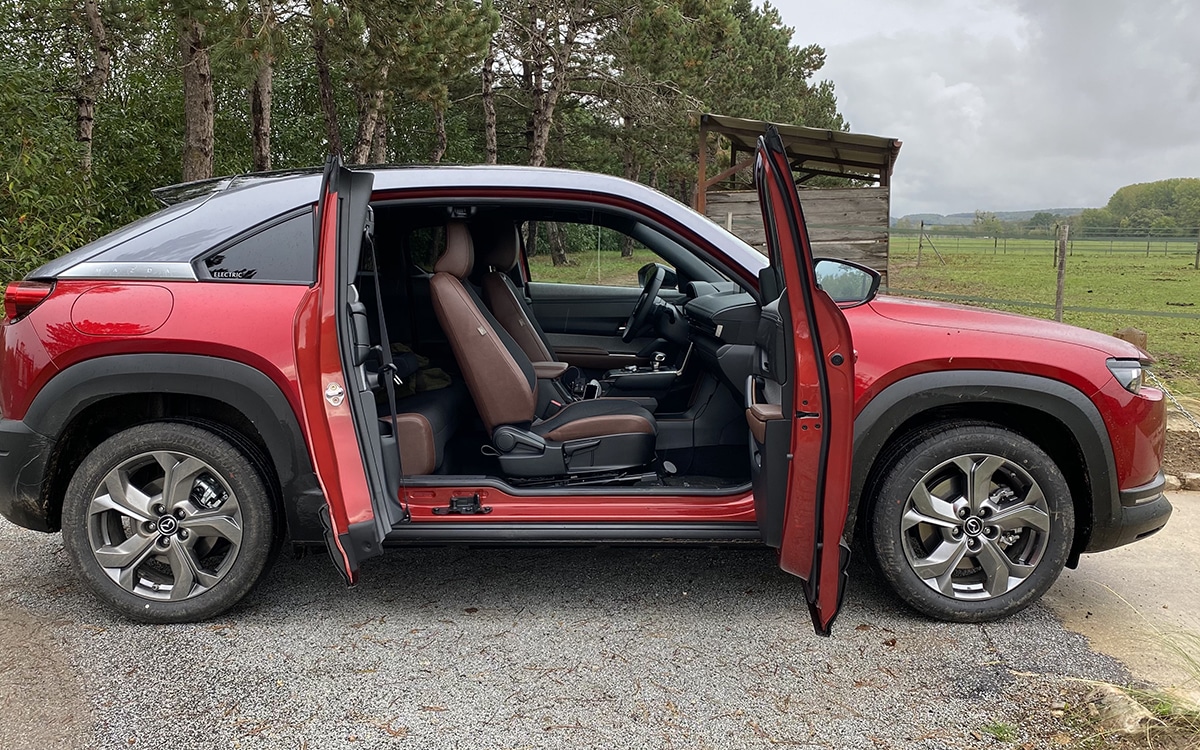 In addition to their originality, they offer easy access on board in the absence of a central pillar and thanks to the opening angle of 82 degrees at the front and 80 degrees at the rear. Of course, it is possible to fold and move the front seats forward. Note that only the driver’s seat is equipped with an electric control with a button which is integrated in the back, and which the passenger can activate when the vehicle is stationary.

Once seated at the back, there is very good legroom and ample headroom for passengers under 1.90 m. However, visibility is very limited. Not only by the thick door pillars on the one hand, but above all the tiny rear windows on the other. And that’s not all, while it offers real advantages, this solution has another practical limitation. Indeed, the opposing doors oblige the driver to always descend to let out the passengers seated in the back.

A word finally on the trunk which offers a capacity of 366 liters, or even 341 liters for lovers of big sound who will opt for the Bose audio system and its 12 speakers. The volume increases to 1,171 liters once the rear seats are folded down (1,146 with the Bose option). A small storage space is also provided under the floor to accommodate the charging cable that is supplied with the car. Or rather the cables, because Mazda offers both the one for charging at home on a 220V household outlet, and a Type 2 cable. 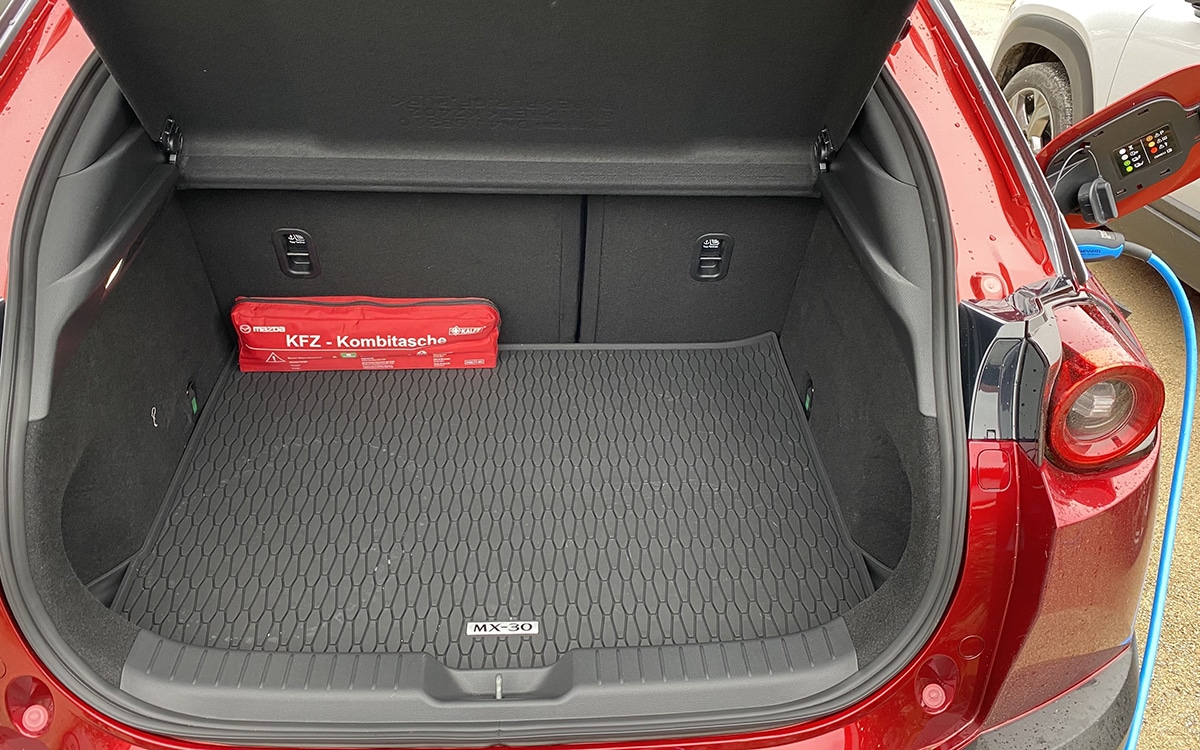 Three screens for the Mazda MX-30

Recent Mazda productions have in common a more polished finish than the average. The Mazda MX-30 is no exception and goes one step further. Door trims, for example, multiply the materials and colors. In addition to the generously padded armrests and the elements with leather effect and stitching, the manufacturer also uses materials such as fibers from recycled plastic bottles, and even natural cork from the bark of uncut trees. 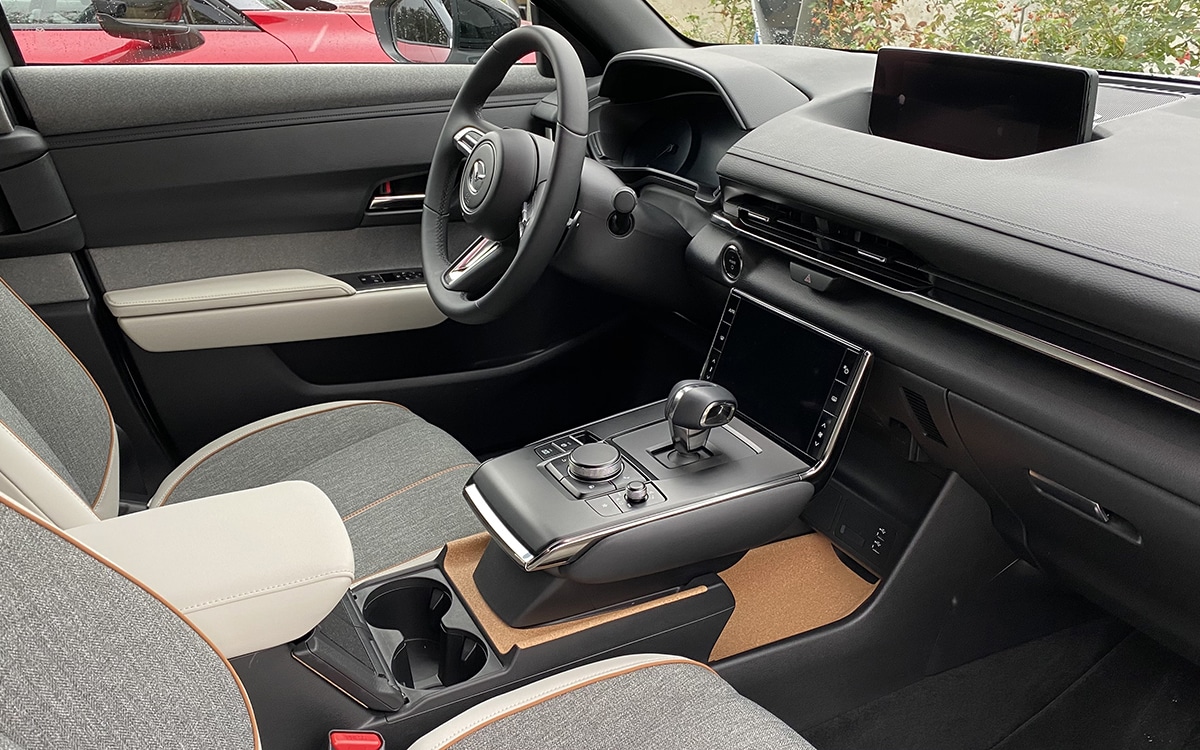 A material that pays homage to the first activity of Mazda, which was originally a cork manufacturer. It is also found in the passenger compartment at the level of the floating central console which is illustrated again with its modern design. Independent from the dashboard, it offers several storage spaces and accommodates a seven-inch touch screen dedicated to air conditioning. A first for Mazda.

Against the grain too, the infotainment screen is not touch-sensitive. Which is also not surprising given its slightly rearward integration in the center of the dashboard. With its 8.8 inch display boasts definition and brightness that makes it easy to read. The interface is classic with an easy-to-learn tree structure, and everything is controlled from the dial located on the central console. The navigation system is also very decent and overall there is not much to fault the infotainment system which plays the efficiency card. 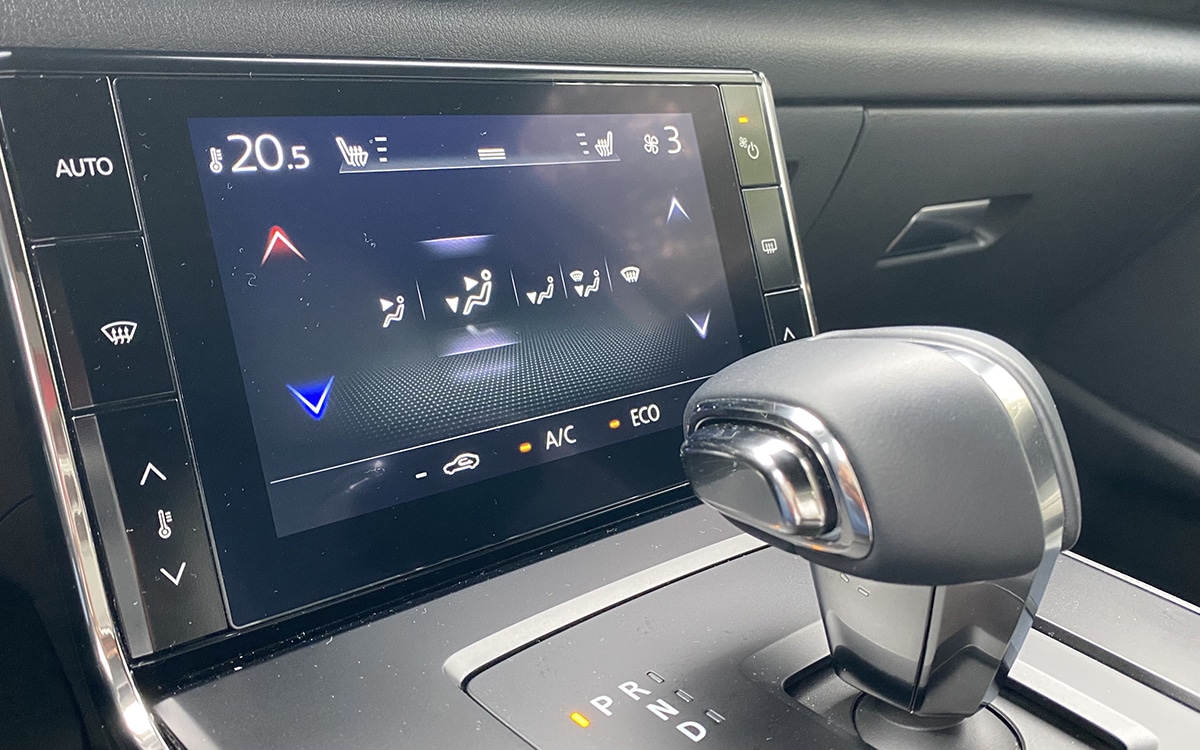 A third screen takes place behind the steering wheel, which combines digital and analogue with the traditional hands that are kept in the right and left dials. In the center, the instrumentation is very classic and above all easy to read again. Finally, the set is completed by a head-up display with a reminder of the speed limit, the current speed and navigation indications.

Read also: how much does it cost to charge your electric car at home?

The Mazda MX-30 on the road

First of all, let us specify that, Covid obliges, our test was carried out over half a day in the Ile de France. In these conditions, it is difficult to assess the autonomy of the Mazda MX-30. In addition, the average of 20.1 kWh / 100 km was noted on our relatively rolling course (but without motorway) and rather short (less than 100 km). Enough to keep the 200 km of autonomy announced by the manufacturer when you avoid long journeys on the motorway. Of course, a braking energy recovery system is available which is easily accessible using the paddles on the steering wheel. Several levels are offered with more or less strong braking, but without going to a complete stop of the vehicle. 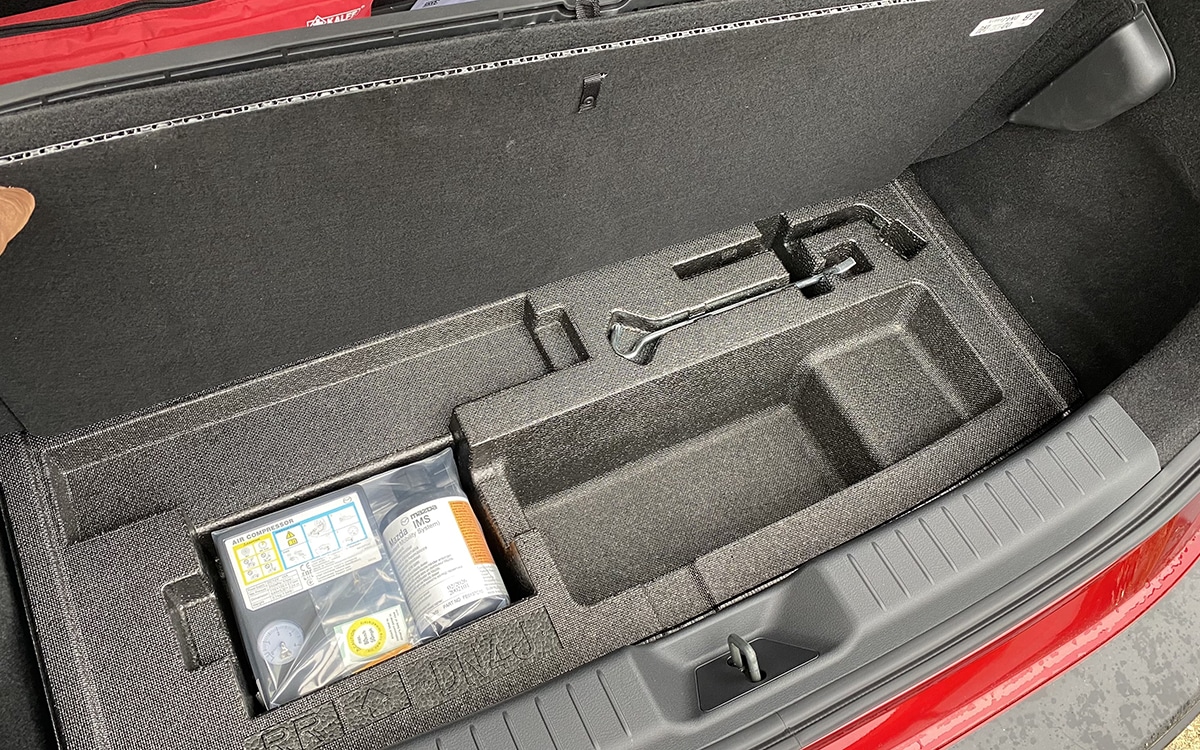 Despite its 145 hp and 270 Nm of torque, the Mazda MX-30 does not stick to the seat when accelerating. The acceleration is smooth (0 to 100 km / h in 9.7 seconds), which does not prevent the reminders when passing. Comfort is at the rendezvous despite the rise in 18-inch series. The suspension limits body movements and damping, although firm, correctly filters the imperfections of the road. Speed ​​is electronically limited to 140 km / h so as not to pump the battery in record time, even if the highway is not the Mazda MX-30’s favorite playground. 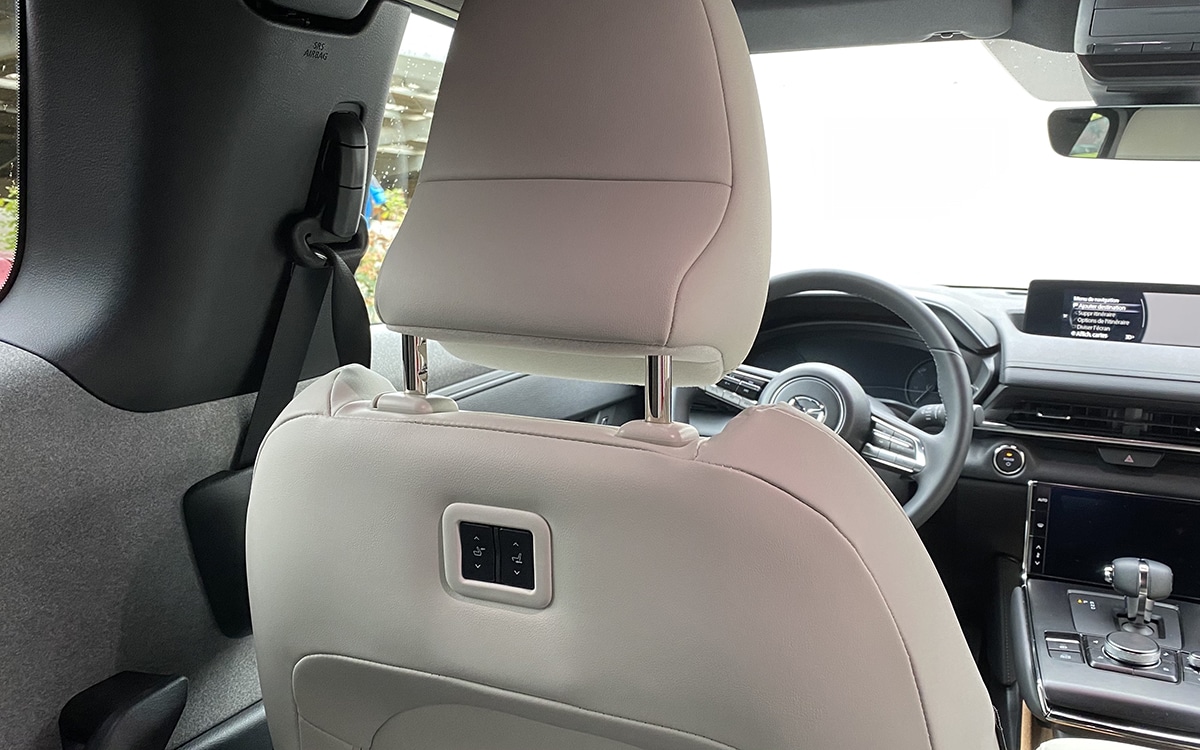 The price of the Mazda MX-30

Due to its dimensions, the Mazda MX-30 positions itself in direct competition with the few electric SUVs available today, and in particular the Peugeot e-2008 as we saw above, the Kia e-Niro and its twin Hyundai Kona electric. Vehicles that promise more autonomy than Mazda’s proposal (300 km on average), but whose price is also higher. Announced at a price from 33,900 euros (before bonus), the Japanese SUV is the cheapest of the lot.

Equipped with very generous standard equipment, the MX-30 finally offers few options. It’s very simple, you can only opt for a metallic paint of your choice. As to Modern Confidence and Industrial Vintage finishes at 37,800 euros, these essentially add aesthetic elements (upholstery, Bose system, lighting atmosphere, etc.). For the rest, whether it is the battery or the engine power, all versions are housed in the same boat. 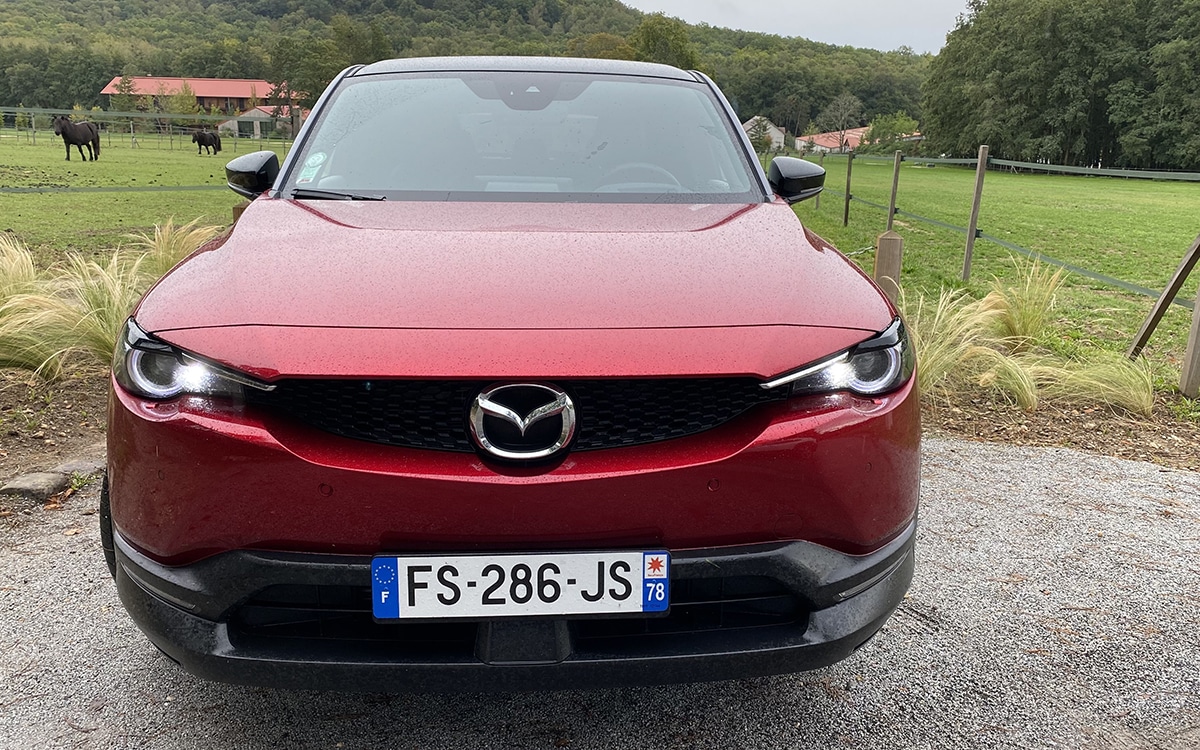