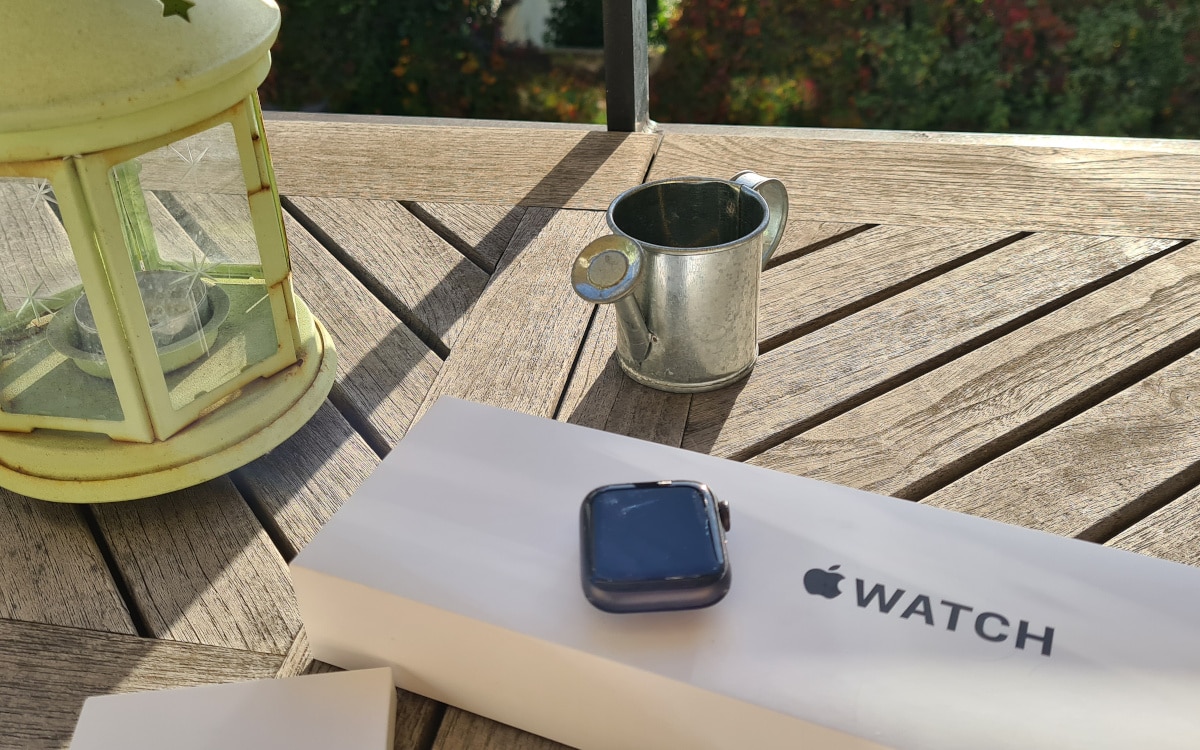 In 2020, Apple adapted the strategy of its smartphones to its smartwatches. By presenting the Watch SE, the equivalent of the iPhone SE in the connected watch segment, the Cupertino company hopes to convince all those who wish to adopt an Apple Watch but who do not have the budget. Is this the winning calculation? Answer in this comprehensive test.

The iPhone SE is quite interesting. For 500 euros, you have the right to a very powerful and complete smartphone. But at this price, you also have to make some concessions. On the picture. On the screen. On the amount of storage. On autonomy. However, for anyone looking for a versatile smartphone that is small in size (because 6 inches might be too big for some), running iOS and not very expensive, this is an interesting alternative.

At 500 euros therefore, the iPhone SE has found its audience, according to some figures presented by research institutes. And it is quite naturally that Apple decided to adapt this strategy to the segment of connected watches where the firm is the undisputed leader. Only, this place of leader, it must defend it. There is of course the Apple Watch Series 6 to wear its colors on the high end (400 euros and more). Around 200 euros where the competition is fiercer, the company is keeping the Apple Watch Series 3 (a funny choice). And in between you have the Apple Watch SE, the iPhone SE watch version.

The price of the watch is 299 euros in WiFi only version and 40 mm box. Count 30 euros to go from the 40 mm model to the 44 mm model. And count 50 euros to add an LTE connection using eSIM. Or a maximum amount of 379 euros with a Single Buckle bracelet or a Sport Bracelet. There is no price difference between the colors: space gray, silver and gold.

As always with Apple Watch, a wide variety of bracelets are available. As a pack, the Apple Watch SE is only associated with affordable bracelets : Sport Band, Sport Buckle, Single Buckle and Braided Single Buckle. As an option, all other leather or steel bracelets (leather, Milanese buckle, link, Hermès single and double turn) are compatible.

On the design side, the Apple Watch SE is strictly identical to the Apple Watch Series 5 and, ultimately, to all Apple smartwaches since Series 4. Display and rectangular cases. Curved mineral glass on the back and back. Metal frame (here in aluminum, therefore) waterproof (up to 50 meters). Digital crown, side button and microphone on the right edge. Loudspeaker on the left edge. 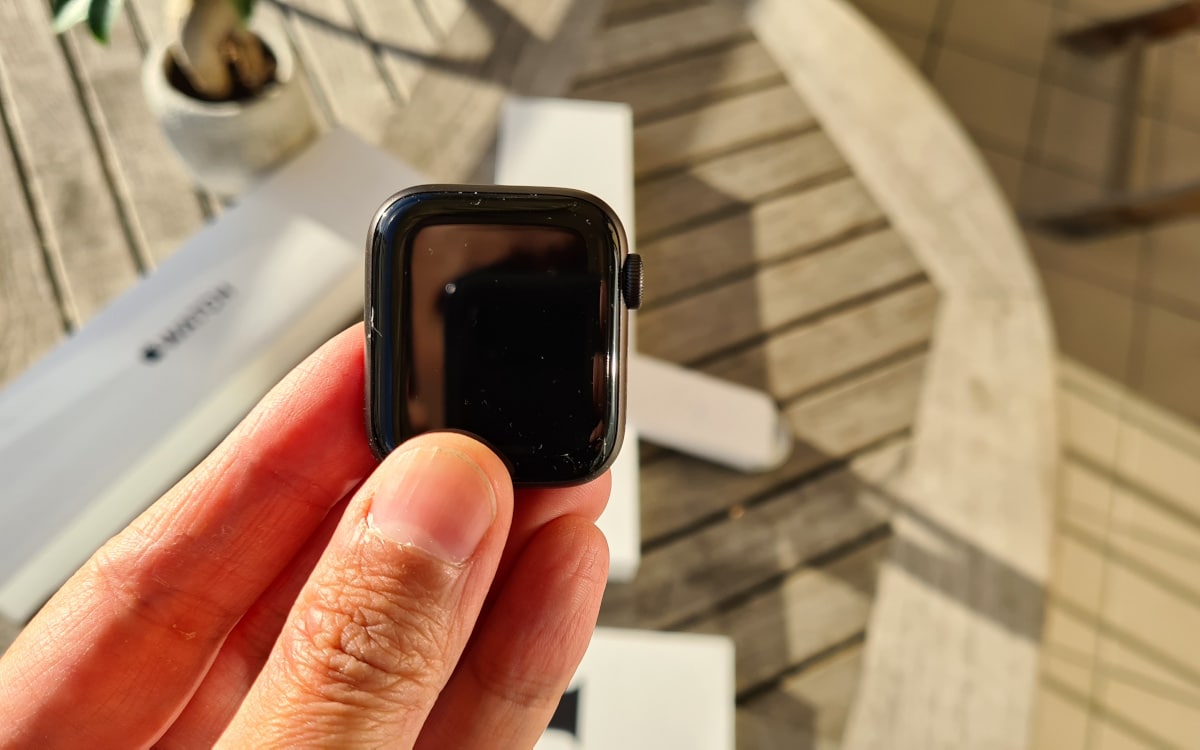 We also find the usual places to connect the bracelet ecosystem. At the rear, the biometric sensors are present behind a panel of synthetic sapphire. We will come back to the sensors present in this Watch SE in the section dedicated to it. At the top and bottom of the location for the sensors, you will find the buttons to unlock the straps of the bracelets (and change the style at your convenience …). 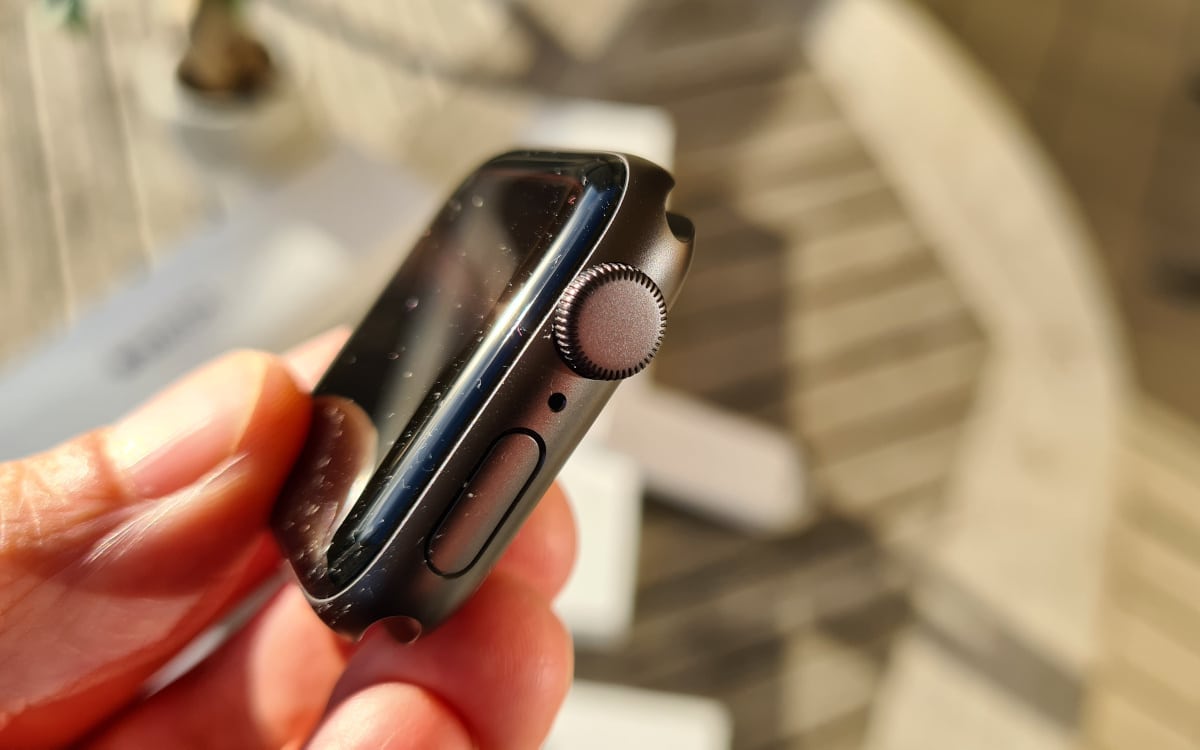 The Apple Watch shown here is a 40 mm model. This means that the case measures 40 mm in height. It is also 34mm wide and 10.4mm thick. It’s a fairly small, rather discreet model. This is especially true with the space gray colourway. The gray version (visually similar to our test copy of the Apple Watch Series 6) is more visible. And the gold version is more… bling-bling. 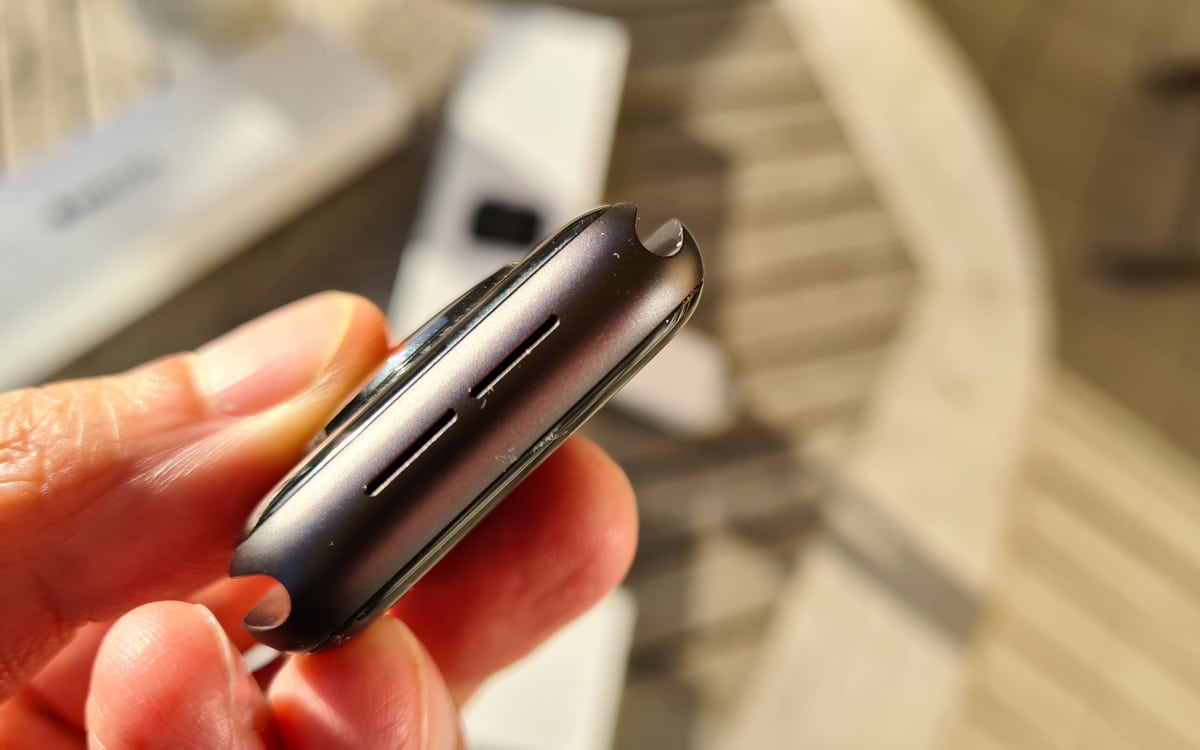 The Apple Watch SE uses the same screen as the Apple Watch Series 5. We therefore find a AMOLED panel 1.57 inch square (here in 40 mm version) or 1.78 inch (for 44 mm version). The resolution of this screen is 324 pixels per inch in both cases (but the definition is obviously different from one model to another). 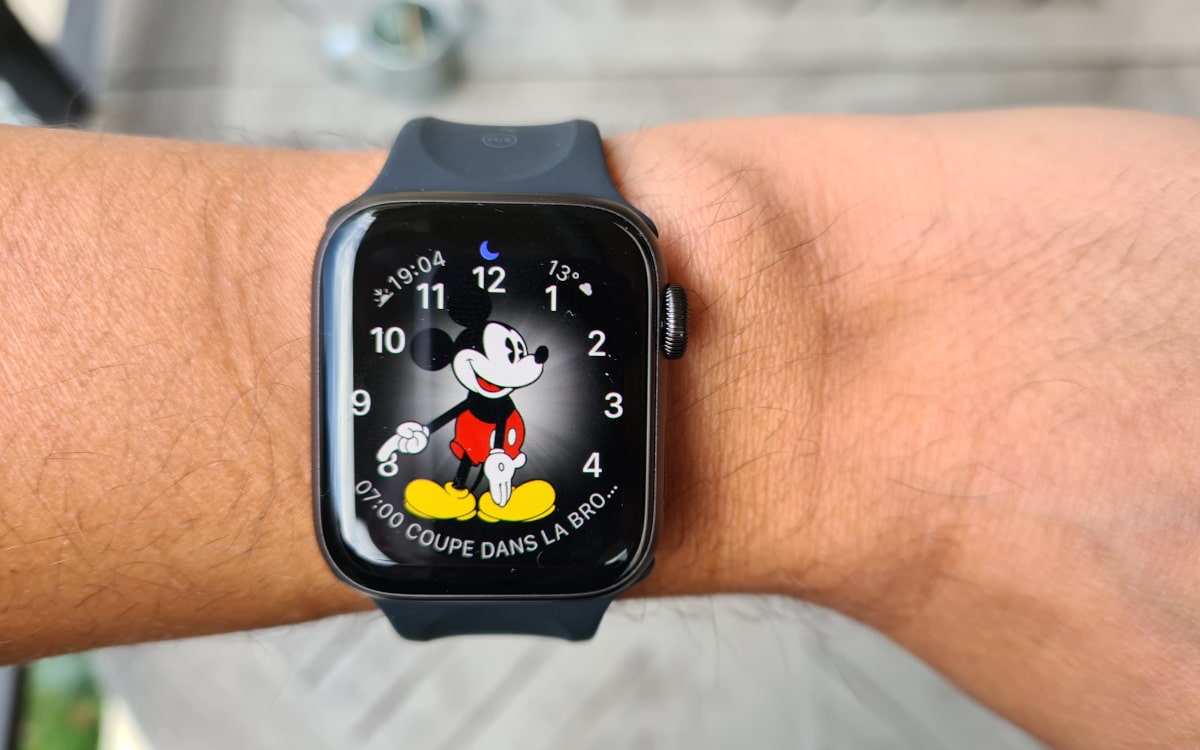 As with the Apple Watch Series 5, the Apple Watch SE offers a good readability in bright light, with wide angles (although in practice you don’t really have to worry about opening viewing angles). Mineral glass reflects the sun relatively little. The contrast remains good, especially if your screen is predominantly black (this is often the case with the available dials).

The Apple Watch SE screen is not Always-On compatible. So the screen turns on when you turn your wrist and turns off after a few seconds of inactivity. You can of course adjust the time between switching on and off. By default, it is 15 seconds. If you increase it, you also decrease the autonomy of the watch, of course. 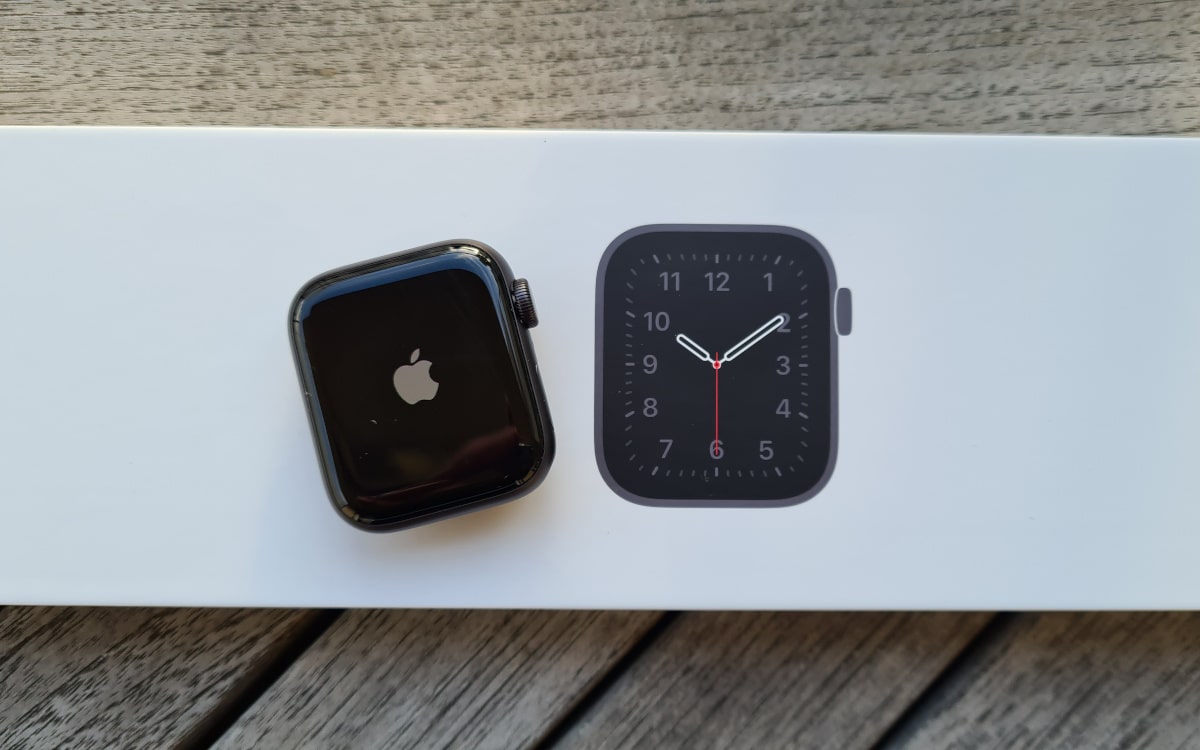 Unlike the Watch Series 6, the Watch SE is 3D Touch compatible. But this does nothing for the watch, since this interaction, which has been present in the Apple Watch for five years, is no longer supported by watchOS 7. The Watches therefore join the iPhones which lost 3D Touch last year. .

On the sensor side, the Apple Watch SE is truly an Apple Watch Series 6 “lite”. This means that it is less well equipped. At the component level, the Watch SE inherits the platform of the Watch Series 5 (Apple S5), as well as its heart rate monitor. She does not have the EKG or oximeter. These are two of the main concessions you have to make if you go for this watch. 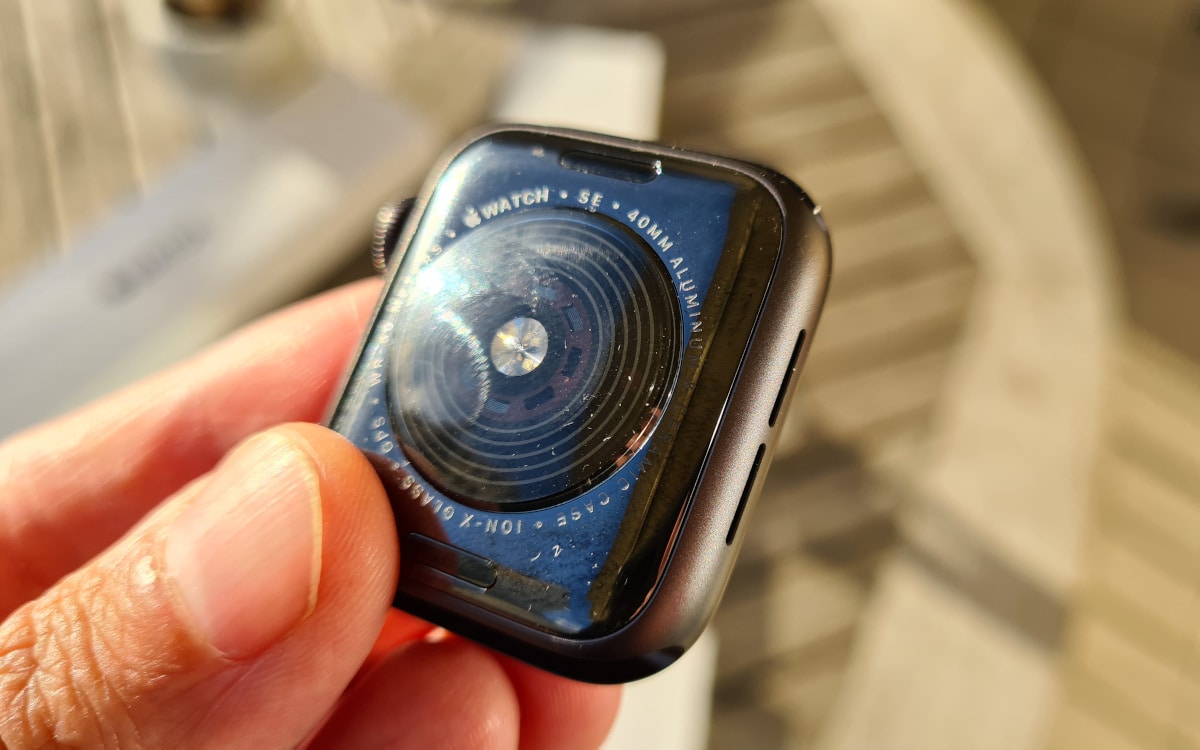 The heart rate monitor of course helps you measure your heart rate, both during exertion and at rest. If your pace is uneven, the watch may notify you. This sensor can also help you measure the calories consumed during a workout. Of course, it’s not as thin as with the Watch Series 6.

In terms of environmental sensors, you will of course find the accelerometer and the gyroscope, to measure steps and movements, the barometer and the magnetometer (compass). You also find the GPS for your walks (since Apple Maps is preinstalled on the watch). Small novelty common with the Apple Watch Series 6 (and which you will not find in the Series 5), the Watch SE is equipped with a altimeter which will be useful for hikers and skiers. Maybe a little less to others … Note the absence of the U1 coprocessor (found in Series 6 and iPhone 11). Another sacrifice in the name of the economy.

Like all other Apple watches, the Watch SE works with watchOS. It is a complete operating system that you can add to applications, such as a smartphone. The applications are presented, by default, in a grid made up of bubbles which represent the application icons. Graphically, these icons are identical to what you find on iOS. In fact, watchOS becomes, over time, a real version of iOS.

If you have apps installed on your iPhone that include an Apple Watch version, it will automatically install on your watch. This is for example the case here with Viewranger (see below), a hiking app. Some third-party applications will ask you to access your biometric data (via Health) in order to flesh out the information available to you. Finally you have access to an App Store directly on the watch, with a search engine (which can be operated either by voice or with character recognition by finger).

The version of watchOS offered here is numbered 7.0. It offers many new features, especially in terms of customization. The most important is the personalization of the dials. It allows you to choose the information that a dial displays. This information is called ” Complications “. Each compatible dial can display from 1 to 4 (but some are incompatible). In addition to Complications, some screens offer other customization options.

Other new features include the native sleep and menstrual cycle tracking application, new activities in the sports tracking application, as well as an application for washing hands and another for checking the sound volume. ambient is not too high. WatchOS 7 also has a real time translator from Siri and adapts the famous Shortcuts built into iPhone with iOS 10.

The Apple Watch SE is based on the same platform as the Apple Watch Series 5. You therefore find the Apple S5 SoC with its dual-core processor, the W3 coprocessor for the management of network connections (in particular improved Bluetooth ), 1 GB of RAM and 32 GB of internal storage for applications, the operating system and your files (including music for offline listening).

Even though it’s less future-proof than that of the Apple Watch Series 6, the Watch SE platform is more than enough to run watchOS 7. So the system is smooth in any situation. As with all its smartwatches, the Cupertino company does not formalize the actual capacity of its battery, but claims that the autonomy of its watches, regardless of the model, is 18 hours in mixed use.

In fact, Apple Watch SE offers, like all other watches, a very variable autonomy depending on your requests and active sensors (biometric and / or environmental). We have found that Apple Watch SE offers similar capability as the Apple Watch Series 6: up to two days with heart rate monitor and with the accelerometer, but without the altimeter or GPS.

The day it was turned on, with the settings to be made and numerous requests, we almost exhausted the battery in one day. Conversely, we removed the watch and left it alone with 100% of the battery: it remained almost 5 days in full standby (without notification, without solicitation) before withdrawing and switching off. Depending on your usage, you will therefore be between these two extremes.

These are obviously figures that are far behind the competition. But, once again, no other watch offers such a comprehensive operating system. The battery capacity of the Apple Watch Series 5 is 245 mAh for the 40mm version and 296mAh for the 44mm version. We believe that Apple reused these two batteries in the Apple Watch SE. This battery recharges in about an hour and a half.

Connecting to a smartphone

Passage required for a connected accessory, the first start-up. As always, an Apple Watch cannot be activated (even for eSIM models) only with an iPhone equipped with the Watch application. And the iPhone must have the latest version of iOS. This limitation on Android makes Apple Watch totally useless if you don’t have an iPhone (it won’t even tell the time). 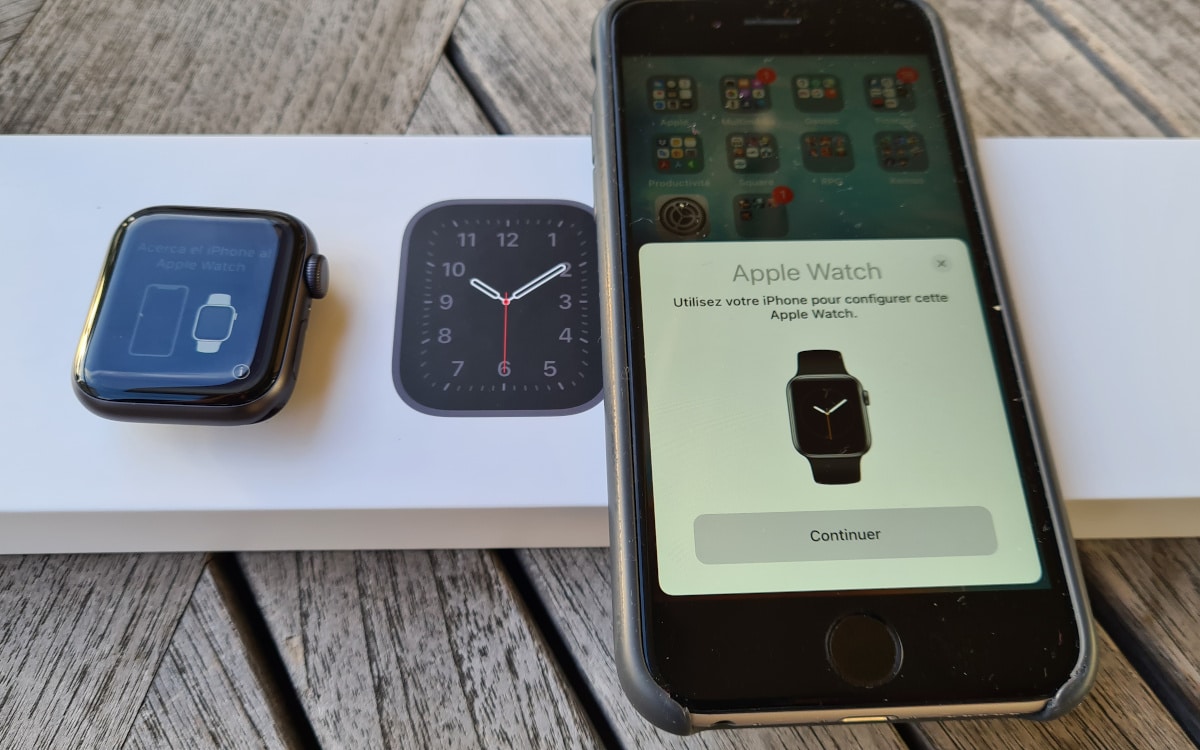 Moreover, Apple Watch can only be used in conjunction with an iPhone : Notifications will only appear on your Apple Watch if the associated applications are installed on an iPhone. Biometric data can only be collected on the iOS compatible Health app. And these are just a few examples.

Apple Watch works in conjunction with three iPhone apps: Watch, Health and Fitness. For this test, we decided to focus on screenshots from watchOS. So find in our Apple Watch Series 6 test all the practical information on these three applications, as well as screenshots. 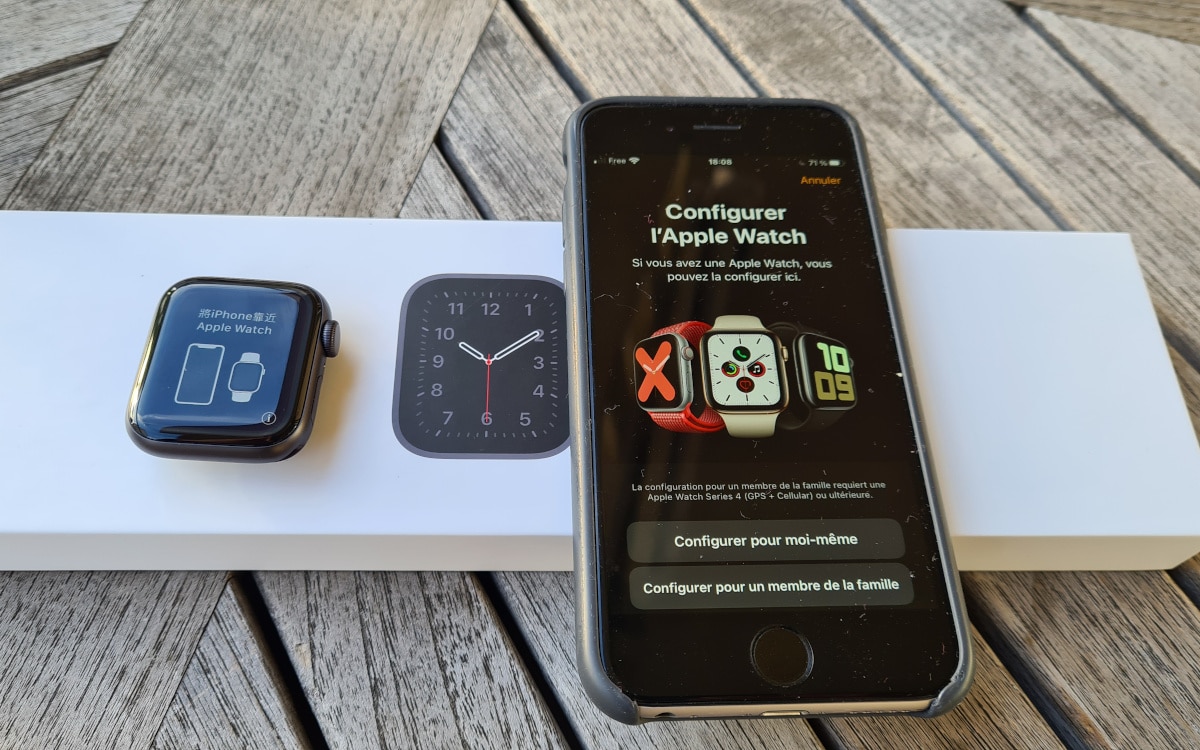 The first of the three applications is for activating and setting up the Apple Watch. The second includes all health-related data: heart rate monitor and oximeter readings, physical activity dashboards, sleep tracking tool, etc. The third is to manage the activity circles (“Move”, “Train” and “Get up”) and share them with your friends. 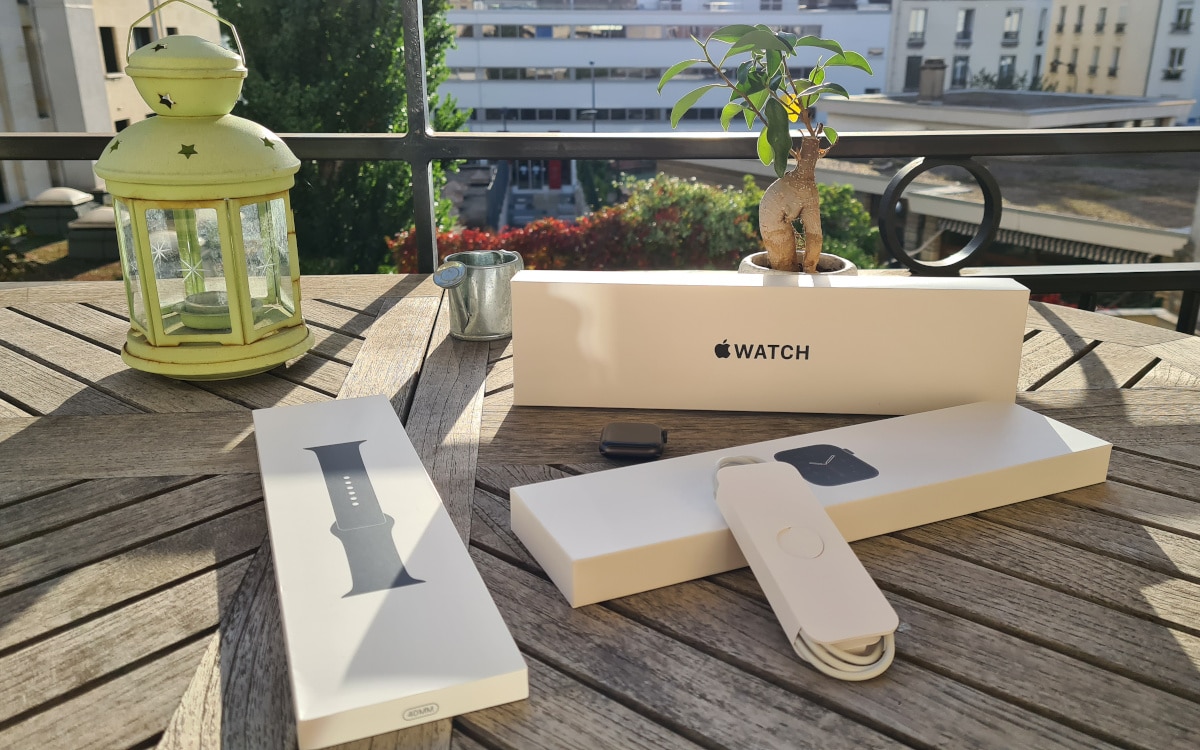 Among the good points of the Watch SE, in addition to its price, you will obviously find watchOS 7, a real operating system embedded in a watch whose new features are numerous and clever, the quality of construction, the strap ecosystem and the ergonomics typical of the American firm’s connected watches.

Among the bad sides of this Watch SE compared to the Watch Series 6, we particularly regret greed over biometric sensors (the oximeter would have deserved to be present in place of the much less useful altimeter), the absence of the U1 coprocessor and the integration of the old Apple S5 platform. Does the price outweigh these choices? We are not entirely convinced of this.

And, comparing to watches from other brands, like Honor, we clearly regret this battery life still very low (that’s the price to pay for having a real OS around your wrist) and the inability to use an Apple Watch with an Android smartphone (and we’re not even talking about its initial activation which should have been able to be done on a iPad).