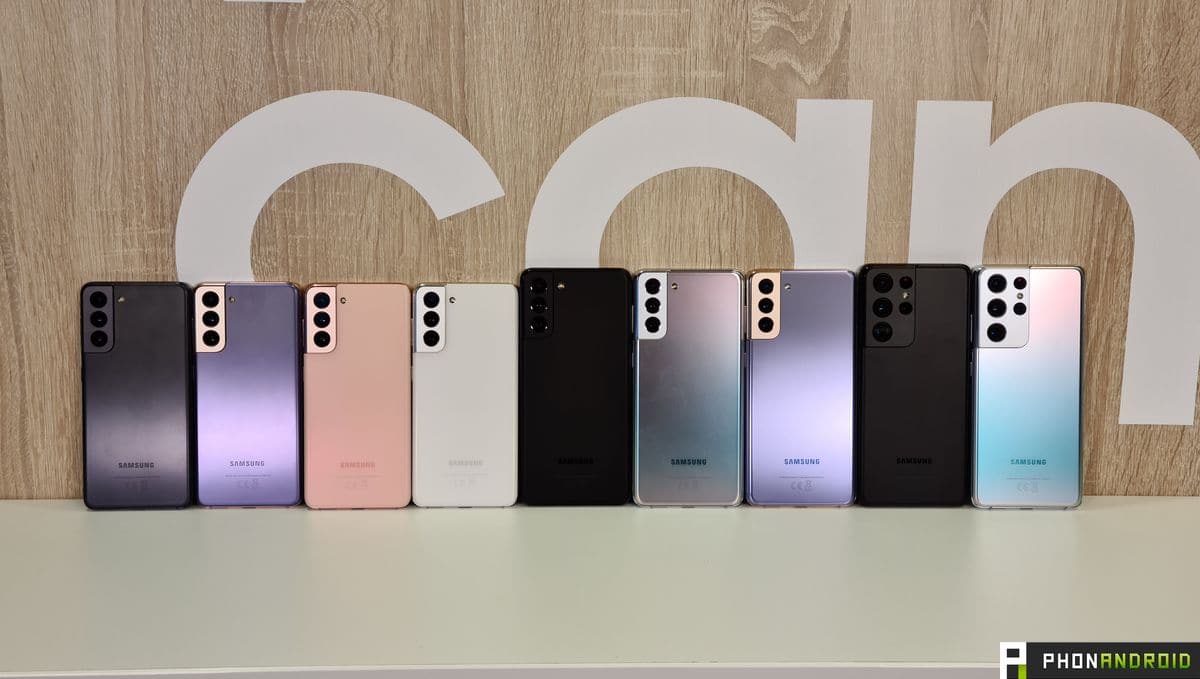 Samsung has finally lifted the veil on its new flagship smartphones: the S21, the S21 + and the S21 Ultra. We were able to take them in hand to give you a first impression. If the brand has struck hard again in terms of design, its new models are only the natural evolution of the S20 on the purely technical aspect.

After months of leaks, rumors and fantasies of all kinds, the Galaxy S21 is finally official. As with the S20, Samsung has not unveiled one, but three smartphones: the S21, the S21 + as well as the S21 Ultra. If the first two are very similar, the Ultra is a true compendium of technologies, a showcase for the manufacturer.

We were able to take control of these three smartphones for more than an hour and the first impression that emerges is very positive. However, the expected revolution is not here.

An evolution more than a revolution

While Samsung has gone straight from the S10 to the S20, this new line is called the S21, not the S30. A way of hang on to the current year. Enough to simplify the name in the mind of the consumer. We should therefore expect the Galaxy S22 in 2022.

We have three smartphones for three price segments. They all have a Samsung Exynos 2100 processor (Qualcomm Snapdragon 888 in the US and Korea) with 8GB of RAM for the S21 and S21 + and 12 or 16GB of RAM for the Ultra. The S21 and S21 + differ from each other only by their size (6.2 inches and 6.7 inches). The Ultra is larger (6.8 inches) but also offers exclusive innovations, such as a 1440p / 120Hz screen, a more powerful photo module as well as compatibility with the S-Pen. Note that the three benefit from Android 11 and One UI 3.0.

Design has always been the strong point of the Korean brand’s products. It shows once again its know-how with this range. The classic S21 adopts a plastic shell imitation metal Of the nicest effect. Pleasant to the touch, the texture of the rear cover suggests a certain solidity. The smartphone is available in four colors: black, white, pink and indigo. This last color brings very pleasant reflections to the eye depending on the light.

The S21 + and S21 Ultra have a hardened glass shell, which is also reminiscent of aluminum. The feel to the touch is the same as with the classic S21. Only the temperature of the colder surface betrays the material used. Both models are available in a classic black colourway, as well asin indigo, silver or mother-of-pearl. These versions have the merit of bringing their own personality to smartphones and there is a very successful game of reflections as on the S21 “Vanilla”.

Overall, the design wants to be more chic, more premium after a little sad S20. The edges and the photo module (except on the black versions) adopt a slightly different color from the shell, which makes them stand out. One thing is certain: the S21 is easily recognizable in a market where all products end up being alike. We will note special care given to the photo module. This now fully hugs the upper left corner of the hood (unlike the S20’s “bump”), which makes its integration very natural. We notice that this module is different on the S21 Ultra, since it accommodates not three, but four sensors.

This small detail reinforces the consistency of the design but also the impression of lightness and finesse of the smartphone. Handling it is a real pleasure and we will note a perfectly distributed weight, despite a certain overweight (172 grams for the S21 and 202 grams for the S21 +). We notice that the fingerprint sensor is missing, since it is once again placed under the screen. It is 70% larger than that of the S20 for a better grip.

Finally, the last important point on this design part concerns exclusively the S21 Ultra. It is indeed compatible with the Samsung S-Pen, a first for a Galaxy S. The idea is not to replace the Note 21, which is well planned, but to provide additional use. The S-Pen does not come with the smartphone, and the smartphone doesn’t even have a notch to accommodate it. However, Samsung will market a special case with a dedicated slot. It will be sold in two versions: one at 79 euros and one at 99 euros. The stylus can be bought from him alone at 39 euros.

The return of flat screens

Regarding screens, the range can be divided into two categories. The S21 and S21 Plus both adopt a Super AMOLED panel in Full HD + (6.2 and 6.7 inches). The first thing you notice, that is, it is totally flat on both products. Samsung has not reintroduced the slight curvature on the sides present on the S20, which had the merit of reinforcing the impression of finesse. A bit of a shame.

However, the two S21 are now on board an adaptive refresh rate of 120 Hz, as on the Note 20 Ultra or the Z Fold 2. An appreciable evolution which allows to enjoy a fluidity of movement pleasing to the eye while preserving autonomy. Note that unlike the S20, it is not possible to opt for a definition in WQHD + at 60 Hz.

The S21 UItra is a special case, since it offers a definition in 1440p with a refresh rate of 120 Hzall at the same time. Its screen is very slightly curved on the sides, which we appreciate. A small design technique that allows him to avoid the “unbalance” aspect in the hand.

The screens of the three smartphones are a feast for the eyes, especially that of the S21 Ultra. The opposite would have been surprising on the part of Samsung, which has always been impeccable on the subject. We will check this in detail with a probe in our next test.

The Ultra, the new benchmark in photography?

As usual, Samsung puts a lot of emphasis on the photo aspect. Again, we have the S21 and S21 Plus on one side, and the S21 Ultra on the other. The first two have three sensors in the rear module: a 64-megapixel Telefoto sensor and two 12-megapixel wide-angle and ultra-wide-angle sensors. Samsung promises improved night mode and Single Take, and 3x optical and 30x digital zoom. It’s hard to get an idea from a quick start, but the quality seems to be there.

The S21 Ultra goes even further with four sensors in my module, which is much larger. We have two 10-megapixel Telefoto sensors, a 12-megapixel ultra-wide-angle sensor as well as a 108 megapixel wide-angle sensor. It has an X100 digital zoom which we manipulated a bit. Even if the result is not really exploitable, the AI ​​allows to obtain a readable image. Note also the presence of a smart lock mode. When you zoom in all the way, the AFN locks onto the point you want to take a picture and makes it easy to capture a shot from afar with your handheld. This mode is available on the other two models.

Finally, Samsung introduced director mode with his S21. It allows simultaneous filming with the front camera (10 megapixel) and the rear sensor. The result is a video where you can see the face of the filmmaker in the top right: practical for streams or videos discovered, for example. Likewise, this mode allows you to change the focal length on the fly without cutting the flow.

Generally, the S21 seduced us during this first contact. However, it will be necessary to scratch a little to discover the possible defects of these versions. Our focus will mainly be on autonomy, which has always been the Achilles heel of the range. On paper, Samsung appears to be following the same path taken for the S20 with 4000, 4800 and 5000mAh batteries for the S21, S21 + and S21 Ultra. It remains to be seen how the Exynos 2100 could improve the experience. Likewise, we regret a fast charge of only 25 Watts. 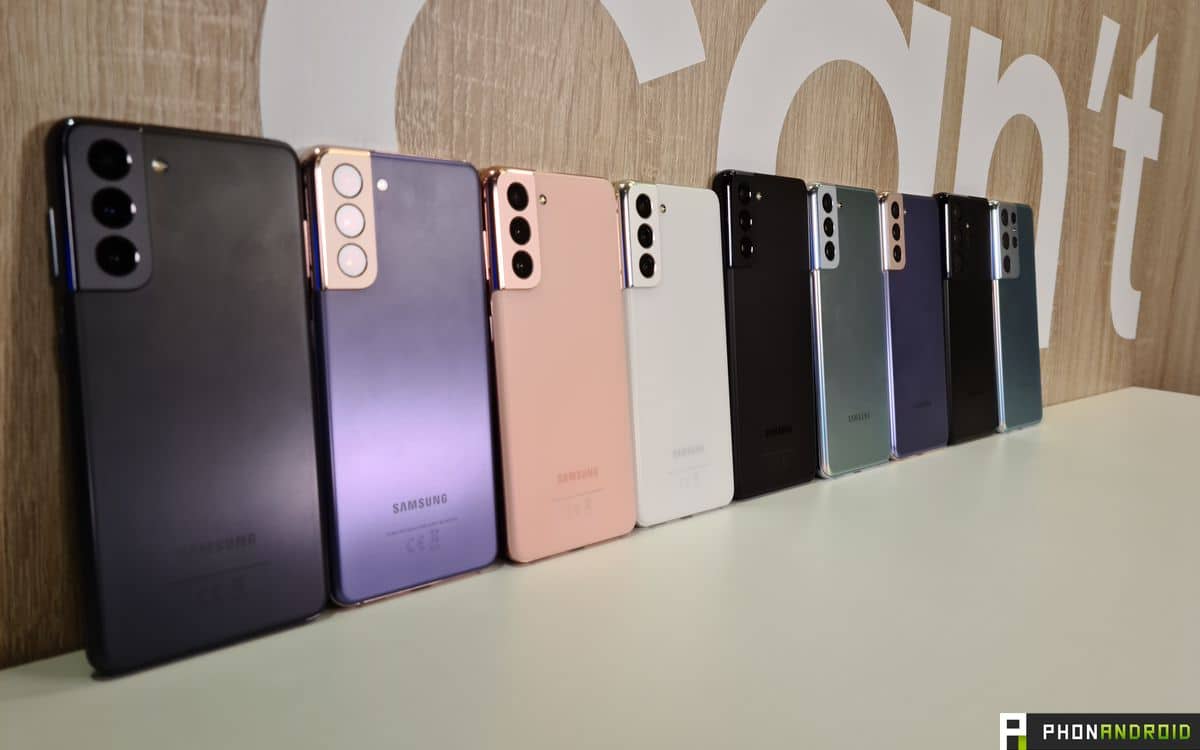 High prices, but lower than the S20 when they were released. The pre-order of Galaxy S21 is open in France. Regardless of the pre-ordered model, you’ll get a free SmarTag (+ a free pair of Galaxy Buds Live headphones if it’s the S21 or S21, or the newly announced Buds Pro free if it’s the S21 Ultra).