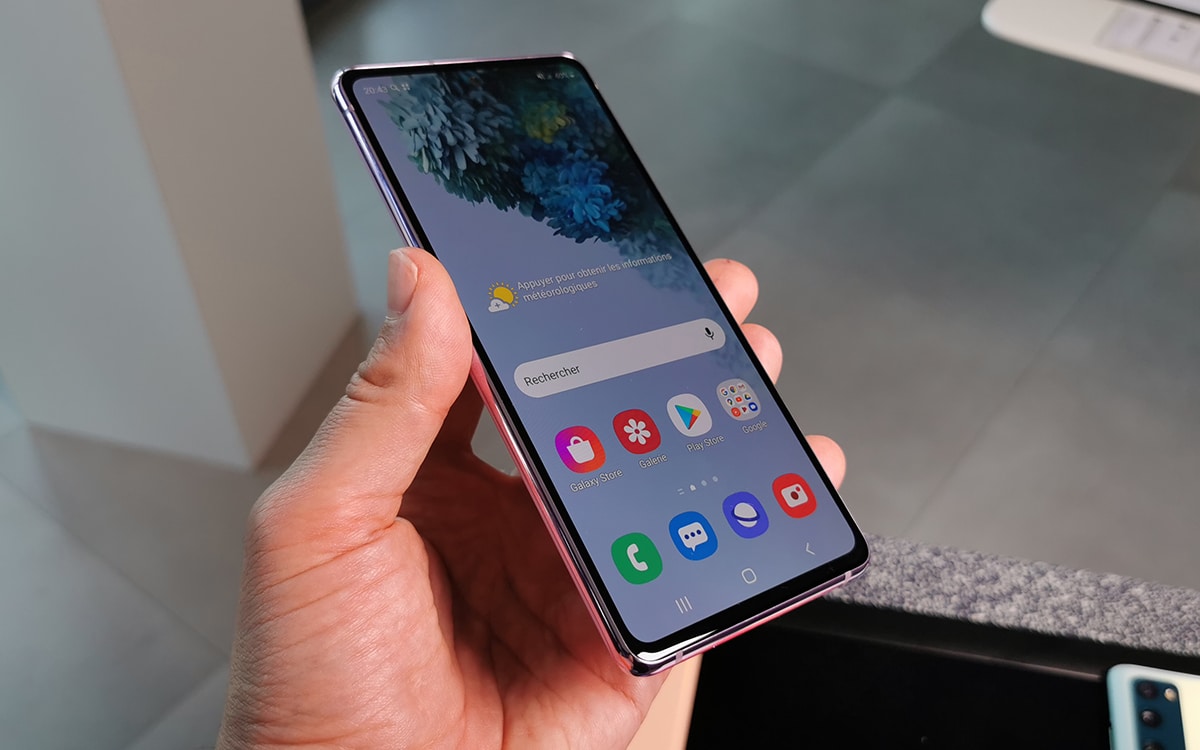 Six months after unveiling its Galaxy S20, S20 + and S20 Ultra, Samsung returns to the charge and presents the… Galaxy S20 Fan Edition! We were able to take the new smartphone in hand and give you all our impressions, before moving on to the full test, of course.

While we were treated last year to the Galaxy S10 lite and Galaxy S10e, which completed the range of Galaxy S released a little earlier, Samsung decided this year to offer a smartphone “in between”: the S20 FE ( Fan Edition). Understand by this that the smartphone is located, in terms of price, between the S10 lite and the S10e, without reaching the price of an S10 or an S20 at their release. It sounds a bit complicated, said like that, but don’t panic: we’re here to explain everything to you about this new smartphone and give you our first impressions.

As Samsung explained to us even before starting its presentation, the S20 FE benefits from a technical sheet almost identical to that of the S20, apart from a few small details. The Galaxy S20 FE is available in 4 editions, depending on whether you prefer 6/8 GB of RAM and 128/256 GB of storage, or whether you go for a 5G compatible model. But the biggest novelty is not there. 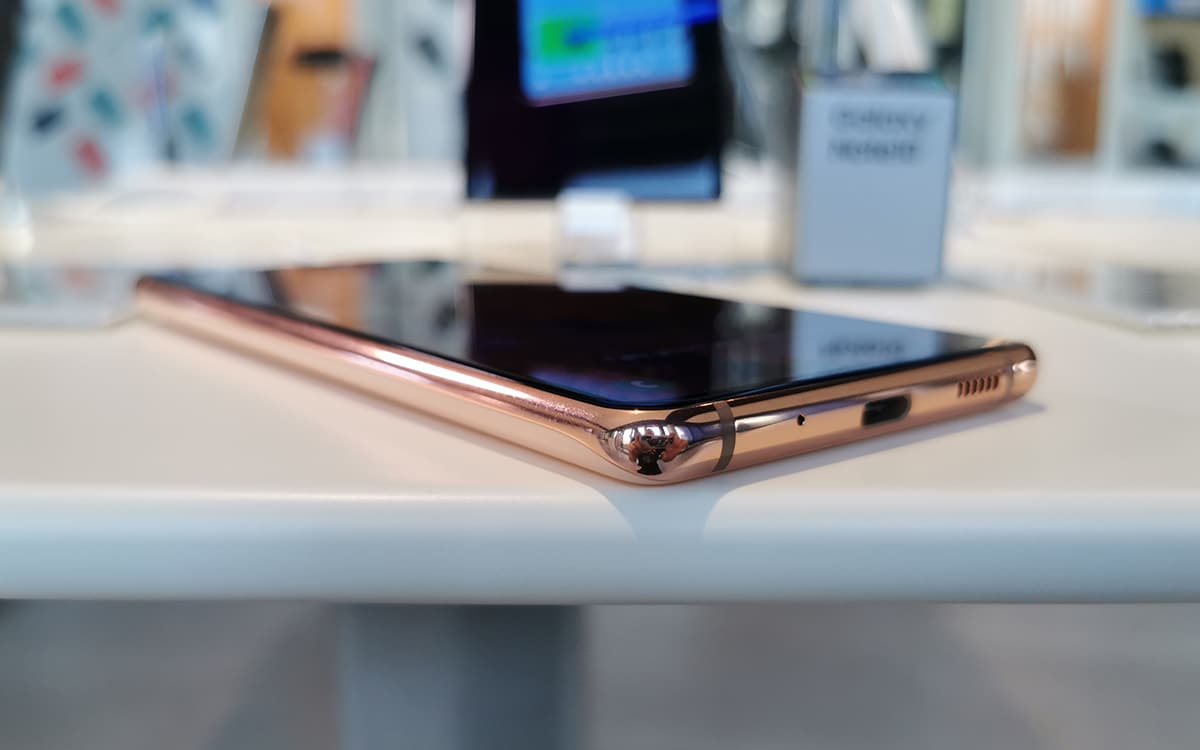 Attention, drum roll: we now have the choice in Europe between an S20 FE equipped with an Exynos 990 SoC or a Snapdragon 865! A great first for us, since Samsung has always favored its Exynos over its Galaxy S range. Rumors of a Snapdragon 865 within the S20 FE were right, but had omitted the Exynos 990 option for Europe.

In reality, it is the choice of whether or not to go for 5G technology that determines the phone’s processor. If you prefer an S20 FE in 4G, you will inherit an Exynos 990. In the event that you bet on the future and opt for a 5G compatible phone, it’s a Snapdragon 865 that will make your smartphone throb.

Finally, on the operating system side, we take advantage ofAndroid delivered here in version 10.0. Samsung assures that its phone will benefit from major updates on three generations of Android, or even beyond. 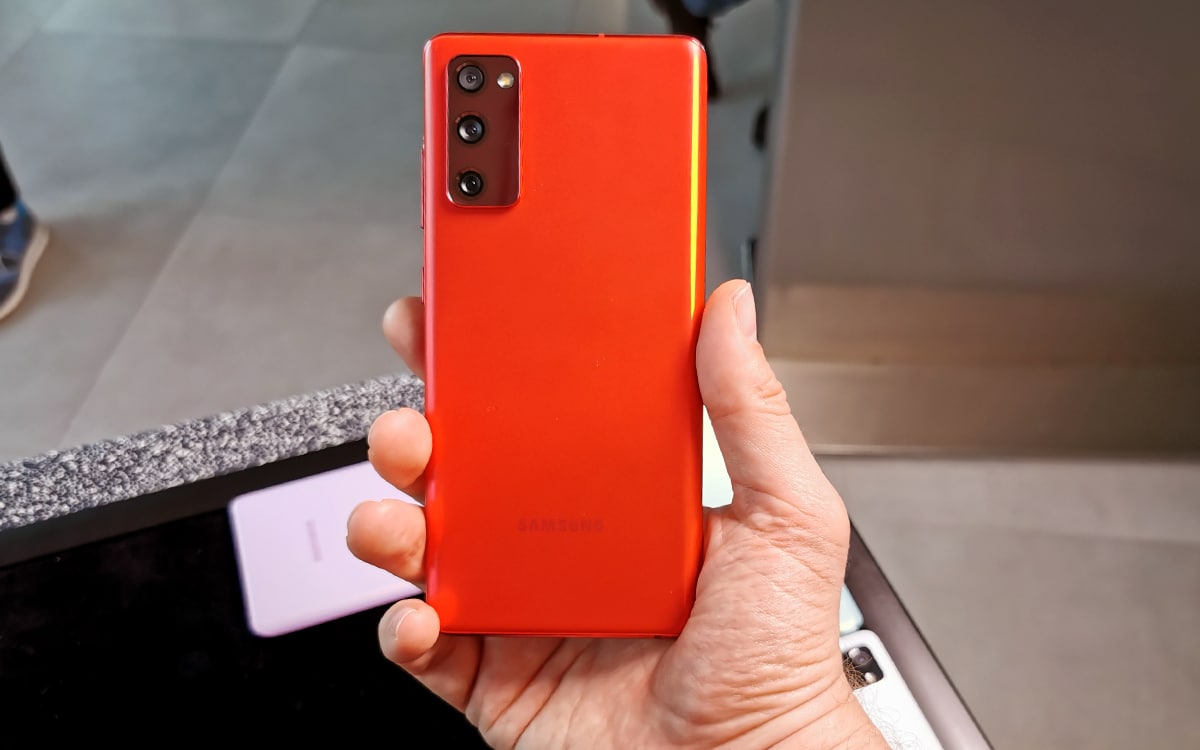 The design of the S20 FE is almost identical to that of the S20 and corresponds to information that was leaked last August. In terms of screen size, with its 6.5 ″ panel, the device comes in between the S20 (6.2 ″) and the S20 + (6.7 ″). On the other hand, and unlike the other models in the range released last March, the S20 FE has a flat screen. Fans of curved edges will be disappointed, but Samsung has had to make choices to deliver a smartphone that’s more affordable than its three big brothers.

For the rest, we find the same technical characteristics as those of the S20 and S20 +. We therefore benefit from the same ultrasonic fingerprint sensor on the front, the same 25 W (wired) or 15 W (wireless) fast charge and the same 4,500 mAh battery than that of the S20 + (the classic S20 being confined to a 4000 mAh battery). The device also retains its IP68 certification, which ensures complete sealing against dust and protection against immersion at more than 1 meter for 1 hour. 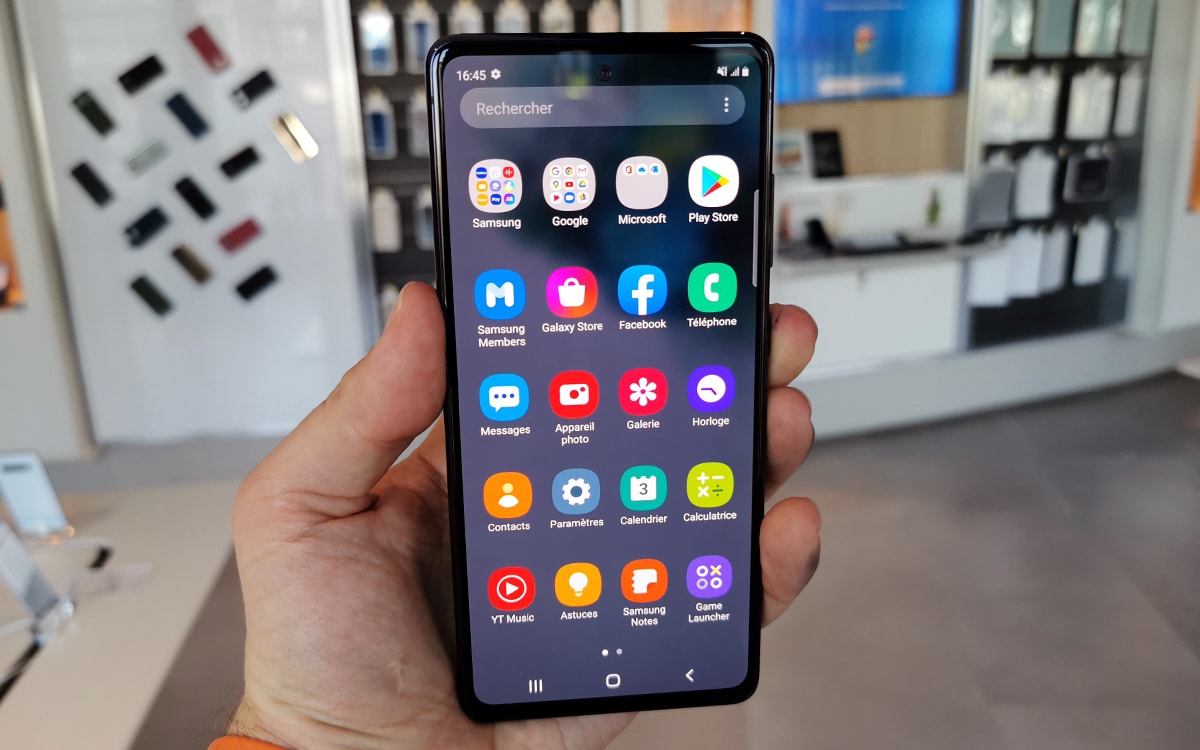 Like the three other S20s released earlier in the year, the Fan Edition benefits from a refresh rate of 120 Hz. We can nevertheless regret that the frequency is not adaptive as on the Note 20 Ultra and that we tested last August. With more than a month and a half between the release of smartphones, Samsung has not seen fit to port its technology to the S20 FE. To see what this restriction gives in the long run, but it will be recalled that the autonomy of the S20 and S20 + (and a little less on the S20 Ultra) was reduced because of the fixed refresh rate. 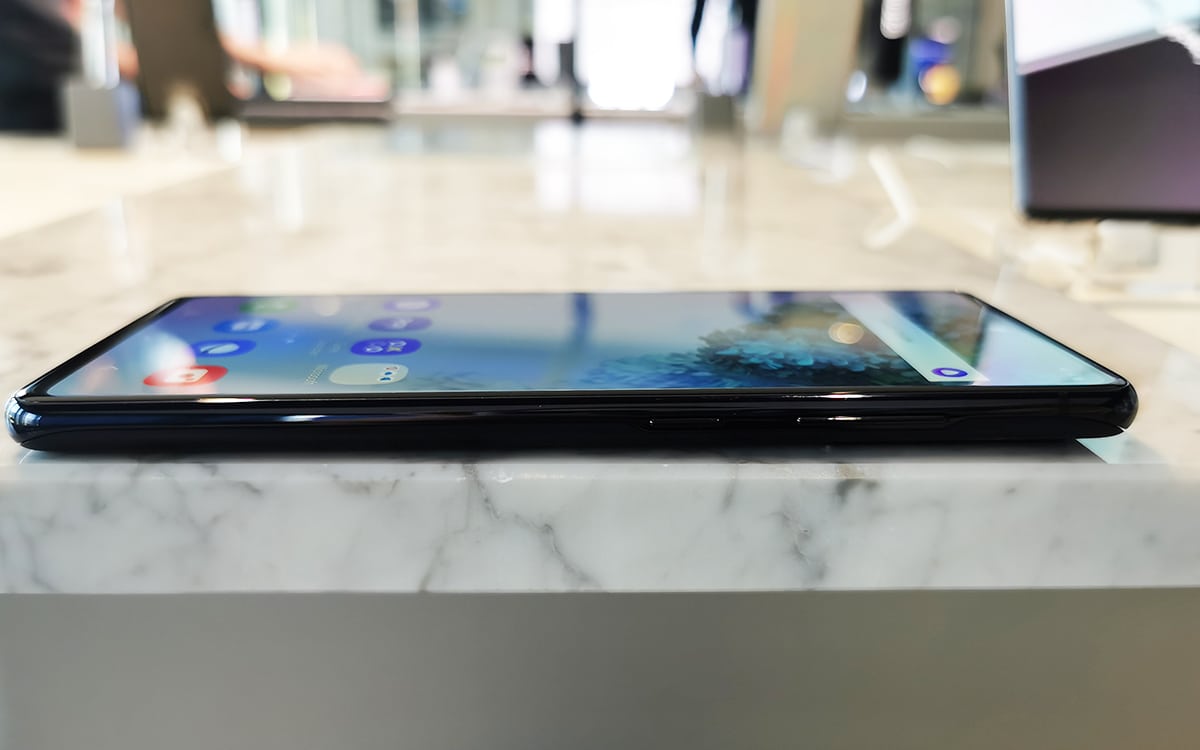 A much lower price than the S20 when it was released

Note also that it is also possible to reduce the bill by benefiting from a trade-in offer from Samsung. By bringing back your old S9 +, for example, the price of the S20 FE drops to 549 euros instead of 659 euros. 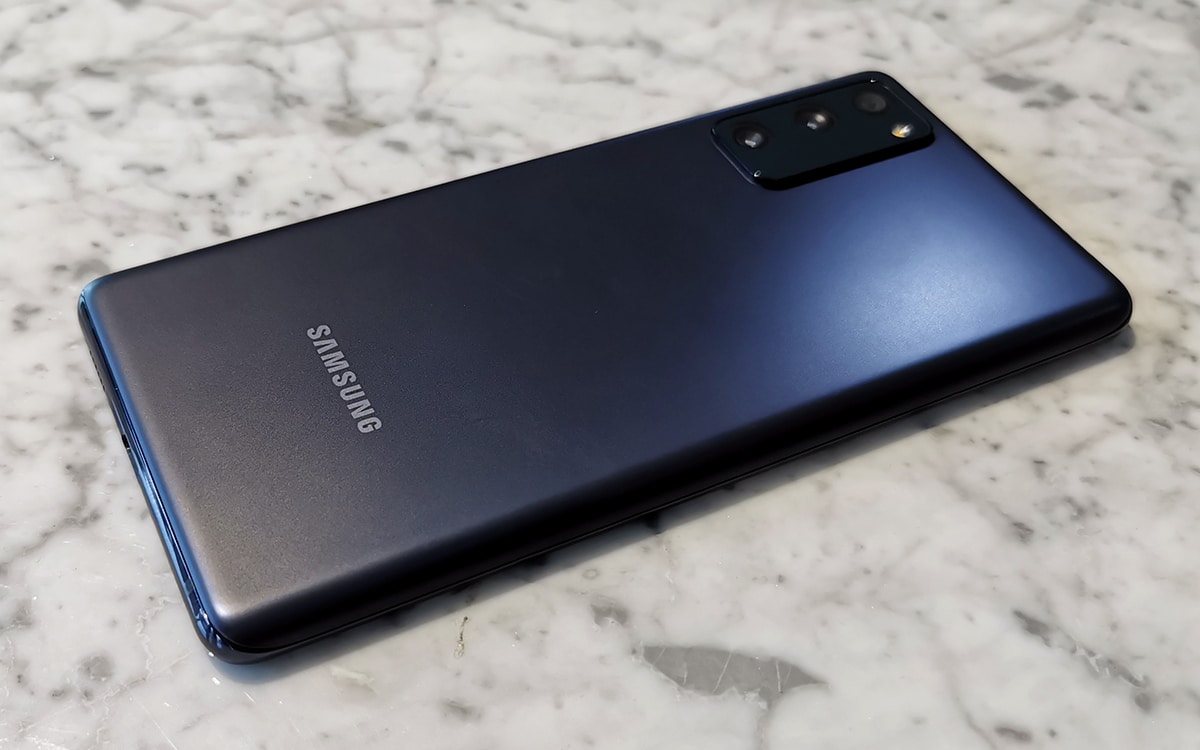 In addition and as shown in the photo below, the Galaxy S20 Fan Edition is available in the following 6 colors: 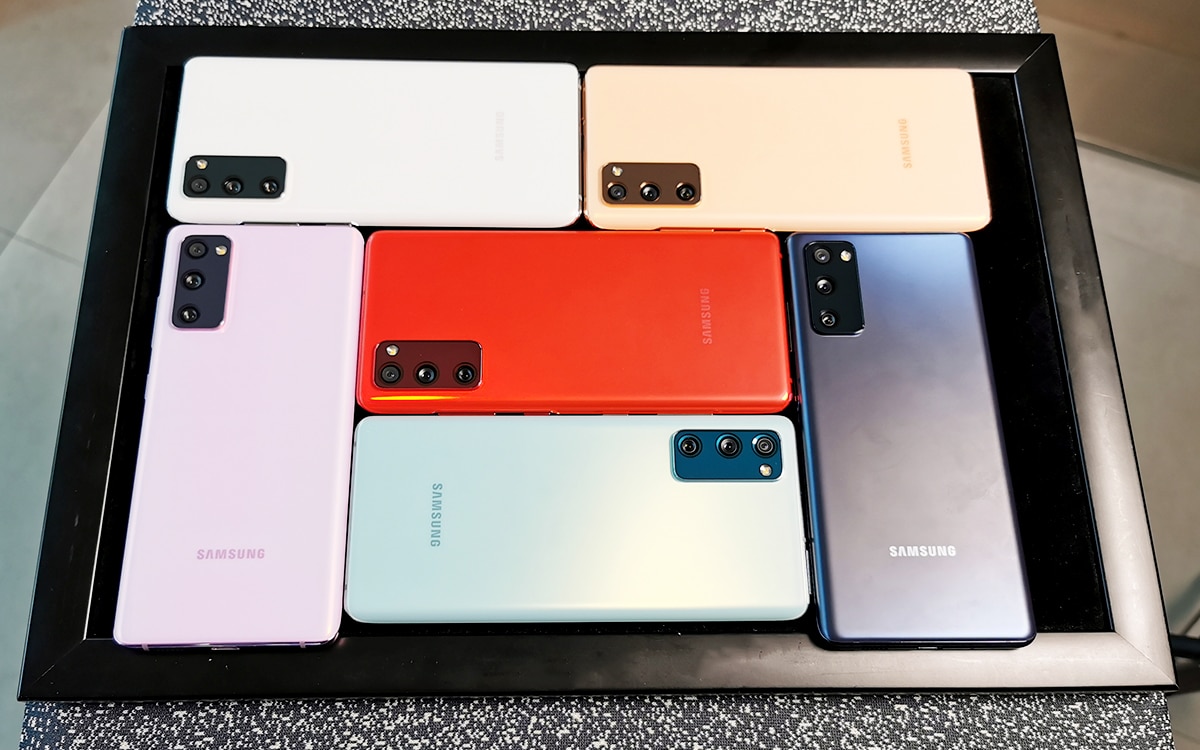 While the main sensor and the ultra-wide angle are identical to those of the S20 and S20 +, Samsung has nevertheless made some changes to its new S20 FE. The capacities of the 3 rear sensors are as follows: 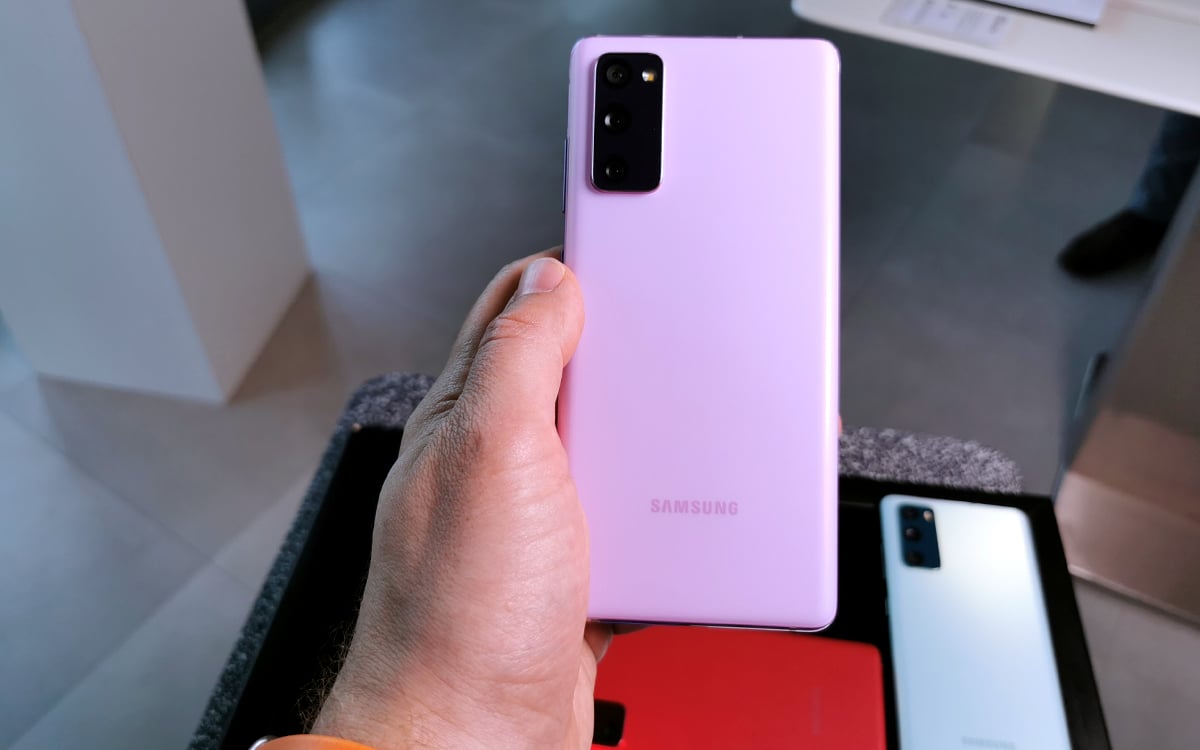 The smartphone benefits from a 3x optical zoom and has a digital zoom x30, just like the S20 and S20 +. It should also offer the same low light performance than those of his big brothers. On the other hand, it loses the possibility of recording videos in 8K. However, it is still possible to capture footage in 4K / 60 FPS, which is now a hyper-widespread standard on mid-range / high-end devices. It also benefits from the same “single take” functionality as its predecessors, which allows you to take up to 14 photos and videos in a single take, in order to retain only the best of them.

At the front, we have a better sensor than those of the S20 and S20 +, and whose capacities are close to that of the S20 Ultra. Here are the characteristics: 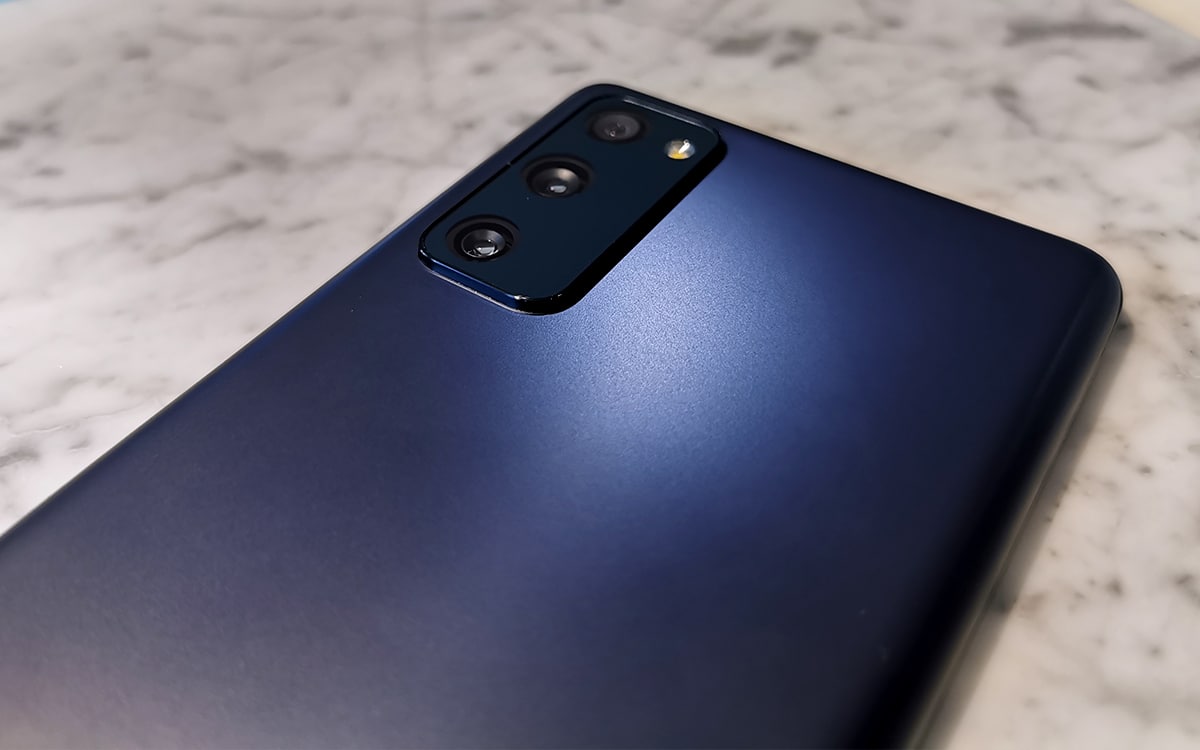 Our handling of the S20 FE

As usual with Samsung, it was during a small session organized in the brand’s premises that we were able to “play” with the S20 FE in preview. The 6 colors were available during the session in question, which allowed us to see that Samsung has still done a good job on the design part of its devices. On the other hand, we do not know for the moment what material was used for the back of the device which, without looking too cheap, seems to be made of plastic. We are awaiting a definitive response from Samsung to really comment on this. 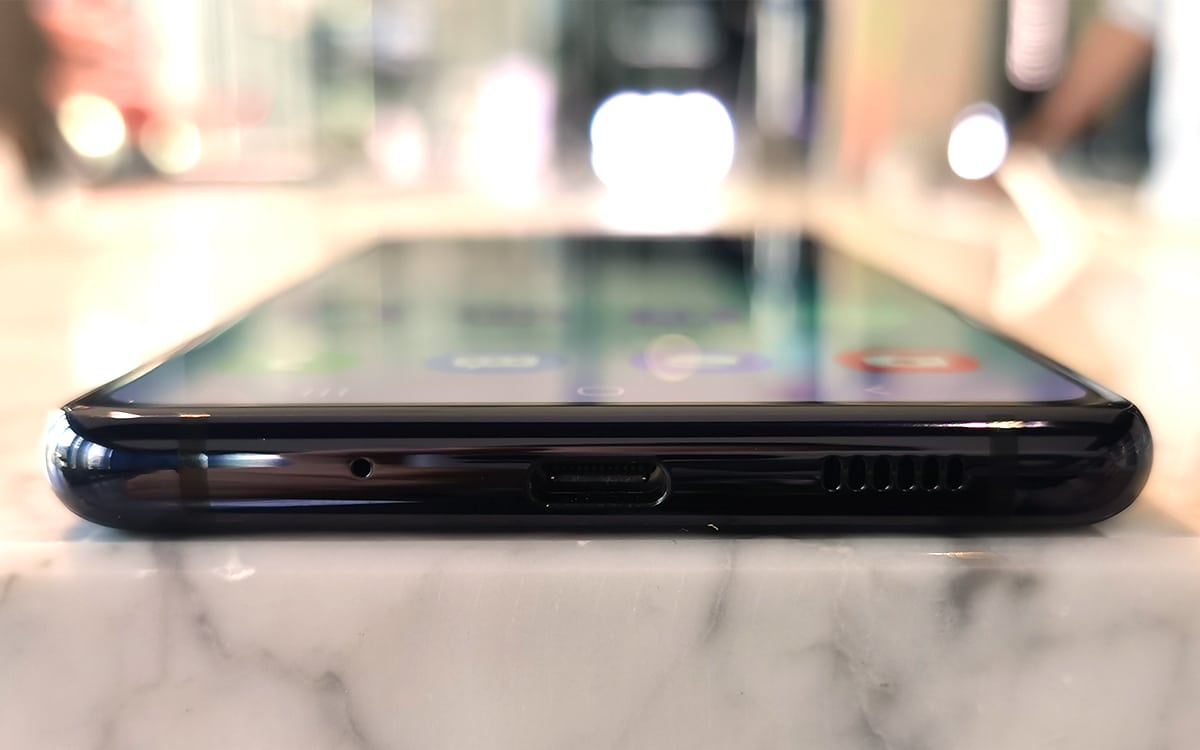 Still, the device is pleasant to handle: the lightness, the grip and the dimensions of the device are still good. One small caveat, though: we really liked the more compact appearance of the S20 with its 6.2 ″ screen and curved edges. Here, we have to make a device with a flat screen, so more classic, and which also takes up more space in the pocket. Even if one-handed use is always possible without using the appropriate mode, it will sometimes be necessary to juggle to reach certain options on the screen (or to have large hands, but that, we do not choose).

The fact that Samsung offers its smartphone in “very colorful and very pop colors” (according to one of the brand’s spokespersons) is a good point. Goodbye to the sad and versatile colors of the S range, the red, peach and lavender models really appealed to us… With a slight preference for the red color, we must admit it. 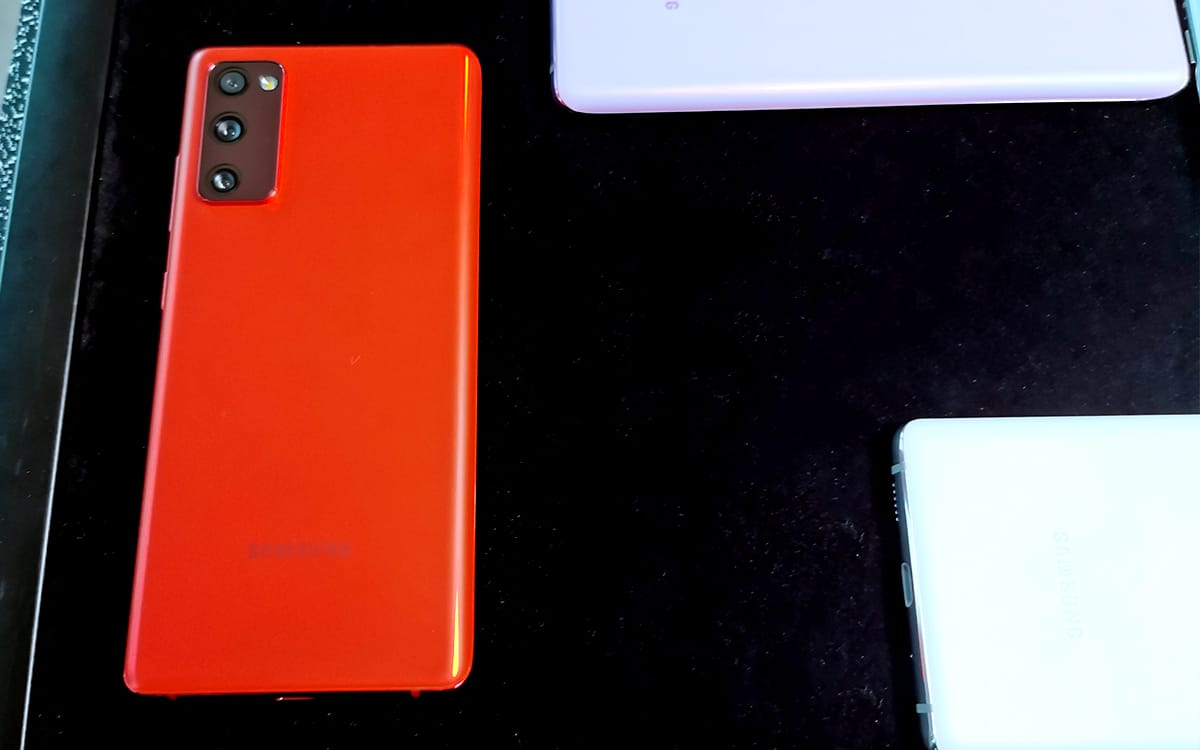 For the rest, we will obviously wait to get our hands on the phone to get an idea of ​​its capabilities in terms of shooting, performance and autonomy. The fact that the technology allowing to adapt the refresh rate according to the type of application running could weigh in the balance against the device, but Samsung having increased the capacity of the battery compared to the S20, we can still hope for honest results.