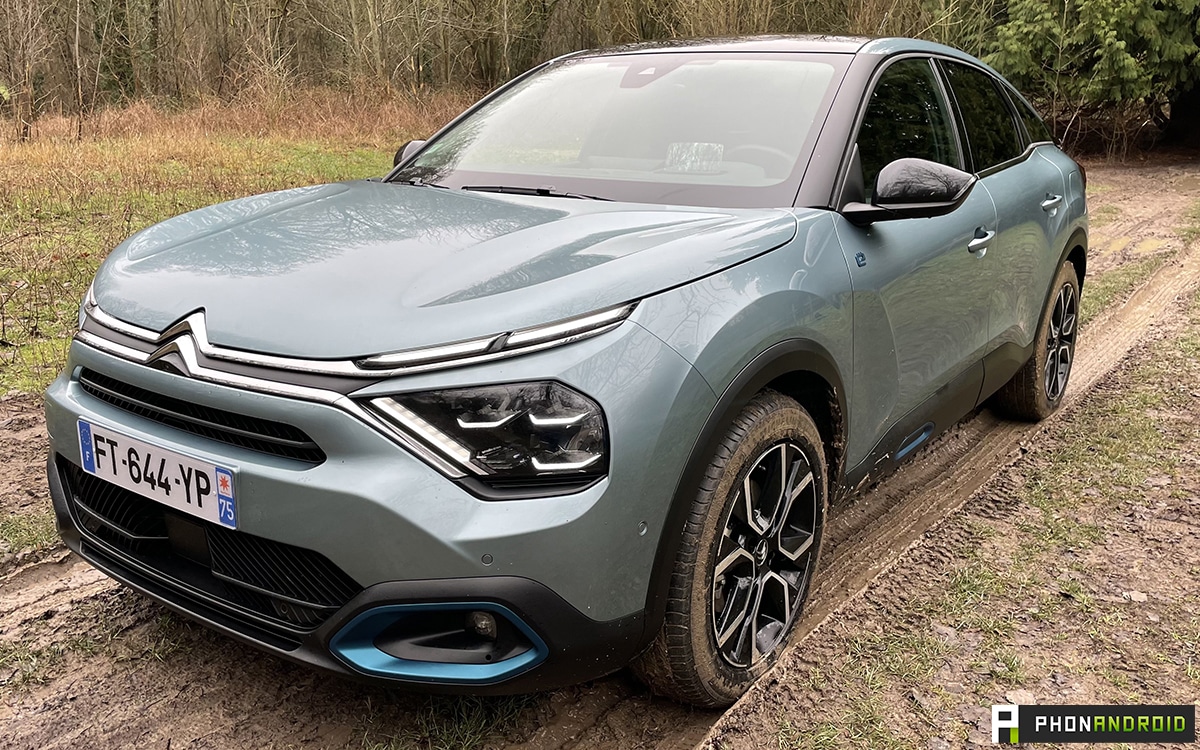 We had the opportunity to take in hand the new Citroën ë-C4. After going it alone for a decade with its C-Zéro, Citroën is joining the PSA offensive in terms of electric cars. In addition to the Citroën AMI which is reserved for town centers, the manufacturer also offers the Citroën ë-C4, an atypical electric car in more than one way.

The Citroën e-C4 is a carbon copy of the new C4: it is based on the e-CMP platform common to all the brands of the PSA group, in particular the Peugeot e-2008 and the upcoming Opel Mokka electric. If the front face is characteristic of the brand’s models, the rest of the line borrows from the SUV through the compact sedan and the coupe. The design, original if ever there is one, can also be very divisive: you love it or you hate it.

Alone a few rare elements differentiate the Citroën ë-C4 from its petrol-powered counterpart: the famous side Airbumps which once again respond to the call, with a blue trim that is also found on the outlines of the front fog lights, or the lettering ë-C4 at the back. The gas hatch of the C4 is also in the same place, but here replaced by the charging connector that goes without saying. For the rest it’s all the same. 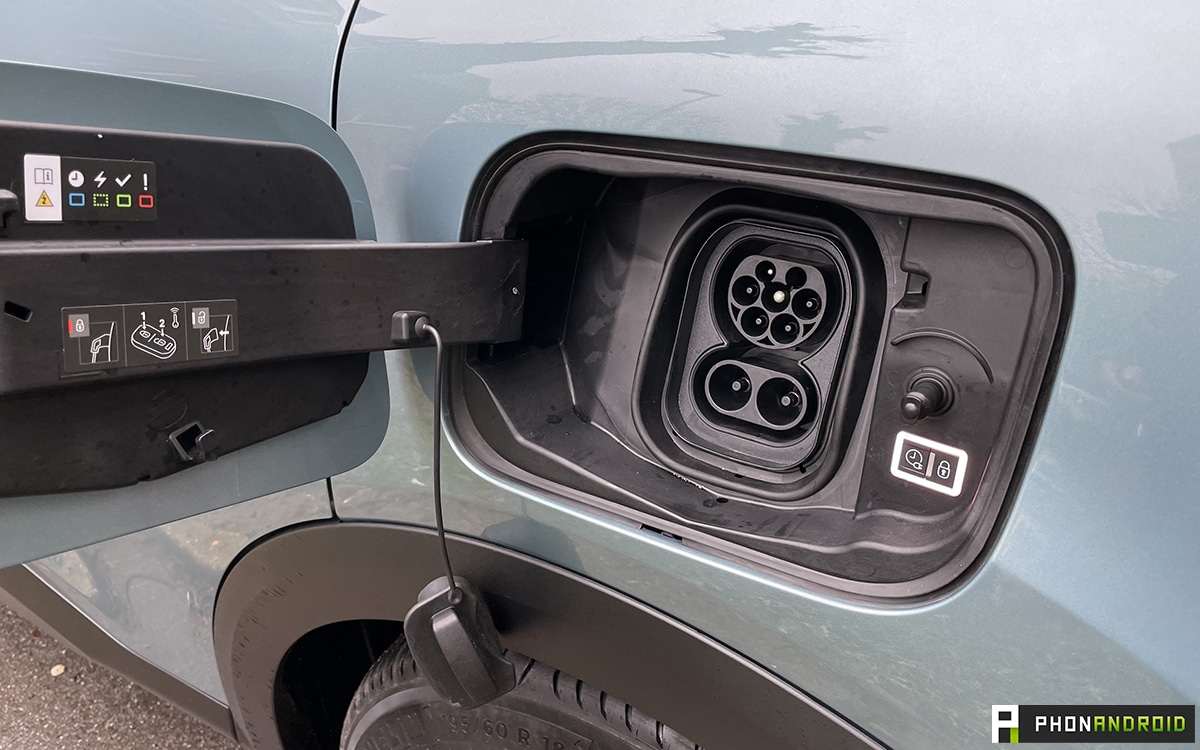 If the Citroën ë-C4 adopts a coupe profile, the rear looks like a futuristic Honda Civic, but adopts a more loaded design. Inside, there is still a presentation identical to that of the C4 in its thermal version. And the first striking detail when opening the door, the door sill is positioned relatively high. So much so that it requires a good lift of the leg to get on board. The presentation is sober, even sad despite the few black lacquered elements that break the monotony of the ubiquitous hard plastics. 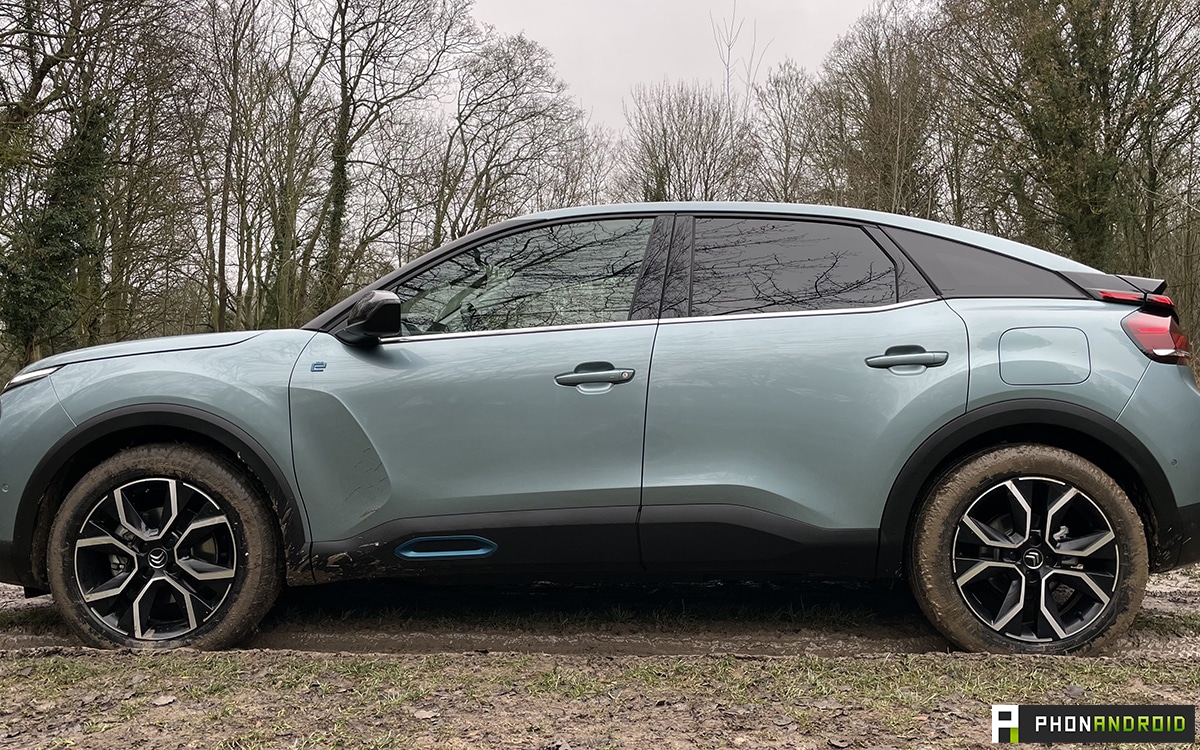 Citroën ë-C4: an interface from another time

Citroën follows the current trend in electric cars by choosing to combine a good-sized touchscreen infotainment screen (ten inches in the Citroën ë-C4) to a tiny display for instrumentation, as on the Volkswagen ID.3 or the Skoda Enyaq iV. Some will say that it is still better than the Tesla Model 3, the price of which has just fallen to the chagrin of recent buyers, and which is satisfied with a single screen. 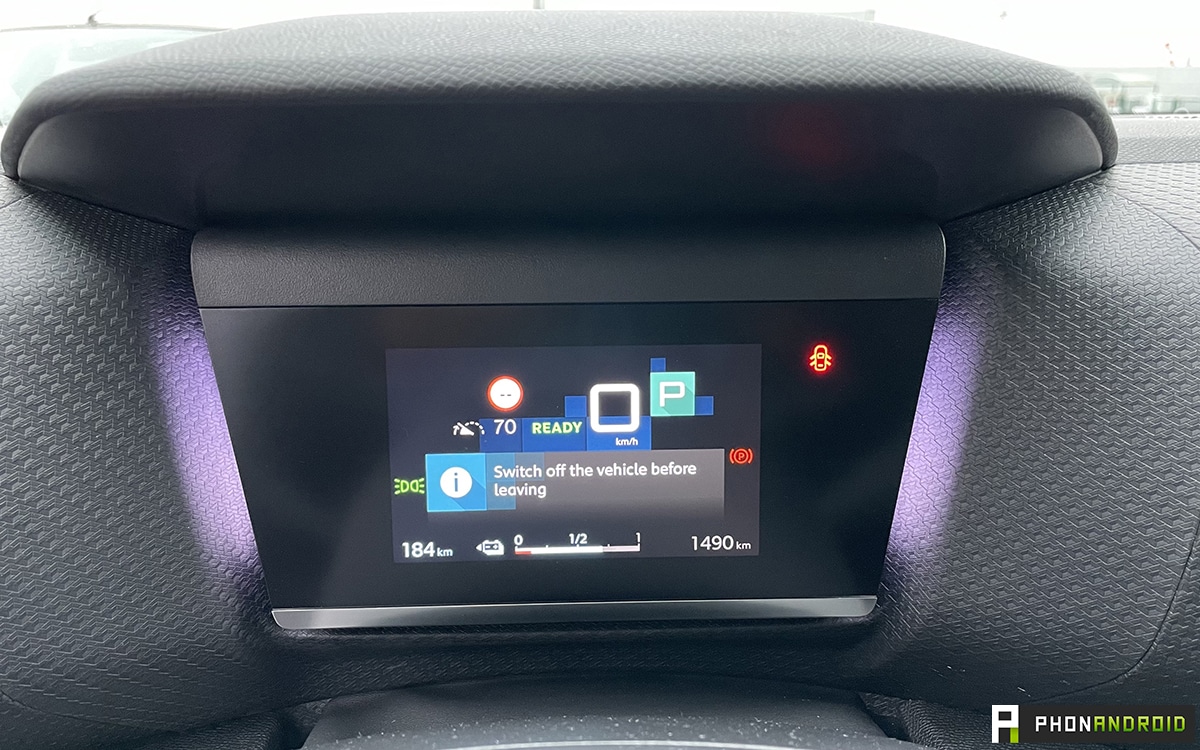 The instrumentation screen just displays basic information with in particular the gear engaged, the speed of the vehicle, a reminder of the current speed limit, the remaining range, the charge level via a gauge and not in percentage, an odometer and finally level of power or regeneration. The whole is quite readable even if we could have done without the dressing, and a customization option would have been welcome. 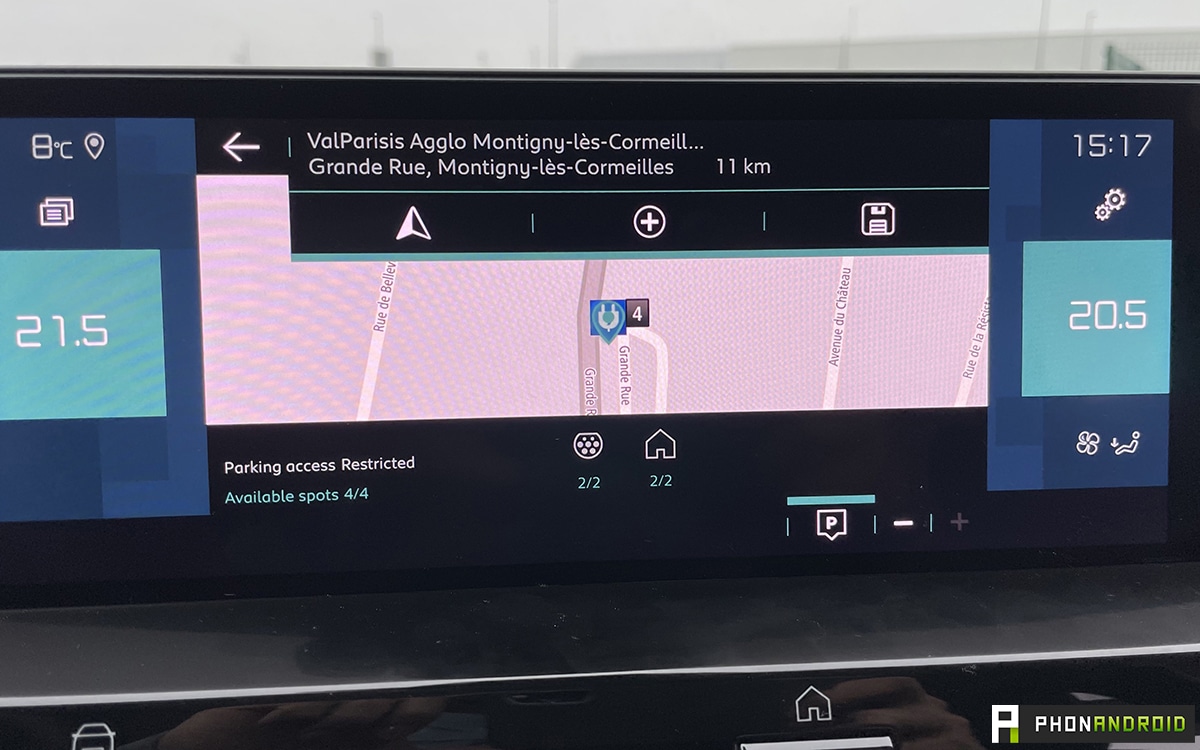 As summary as it is, the instrumentation is completed by a head-up display (HUD). The latter is reminiscent of the first generations of this type of device with a glass element which is raised when the ignition is switched on. It allows certain information to be viewed directly in the driver’s field of vision. In addition to the car’s speed and the current speed limit, the HUD also indicates whether lane keeping assist and adaptive cruise control are activated. Directional reminders to follow are also displayed if GPS is used. 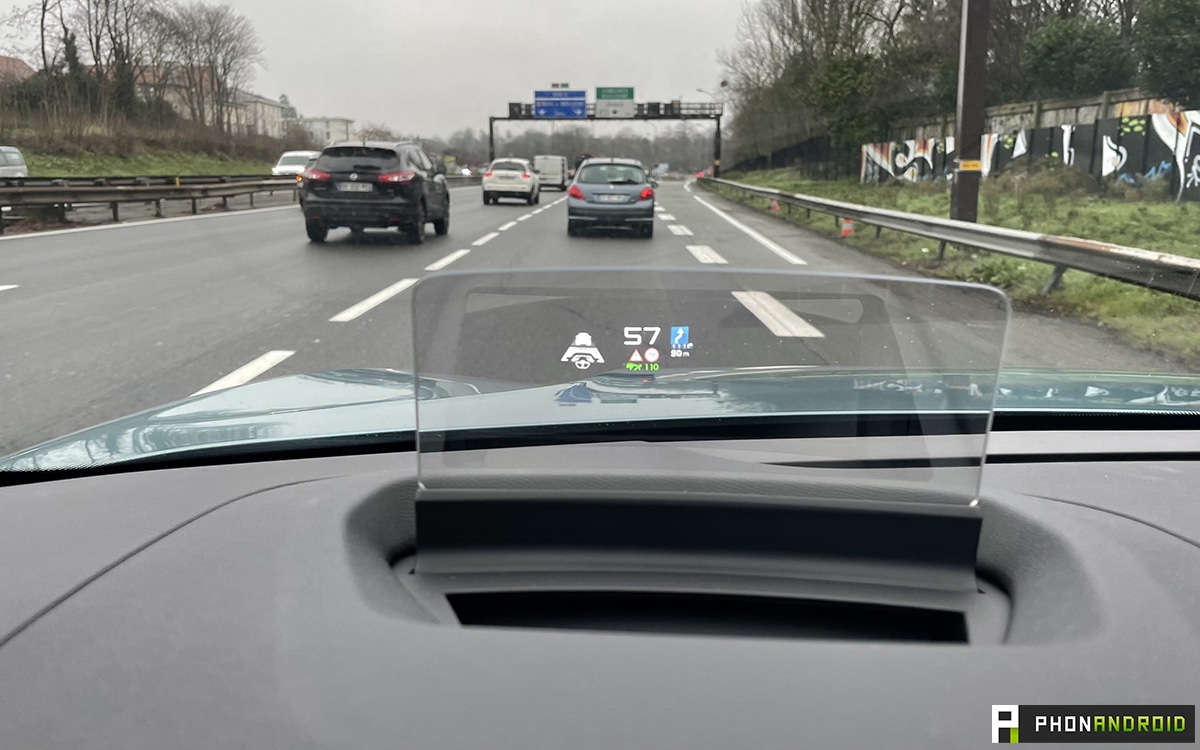 About the GPS, this is like the interface of the infotainment screen: dated. Based on the TomTom solution, it nevertheless fulfills its role, although more is expected from a recent electric car. The proof with the estimated travel time which does not take into account the recharge time. Recharging, you have to go to the section dedicated to points of interest and look for nearby terminals with some basic information (number of outlets, type of connector). Far from what some competing models can offer which are much more efficient on this point. 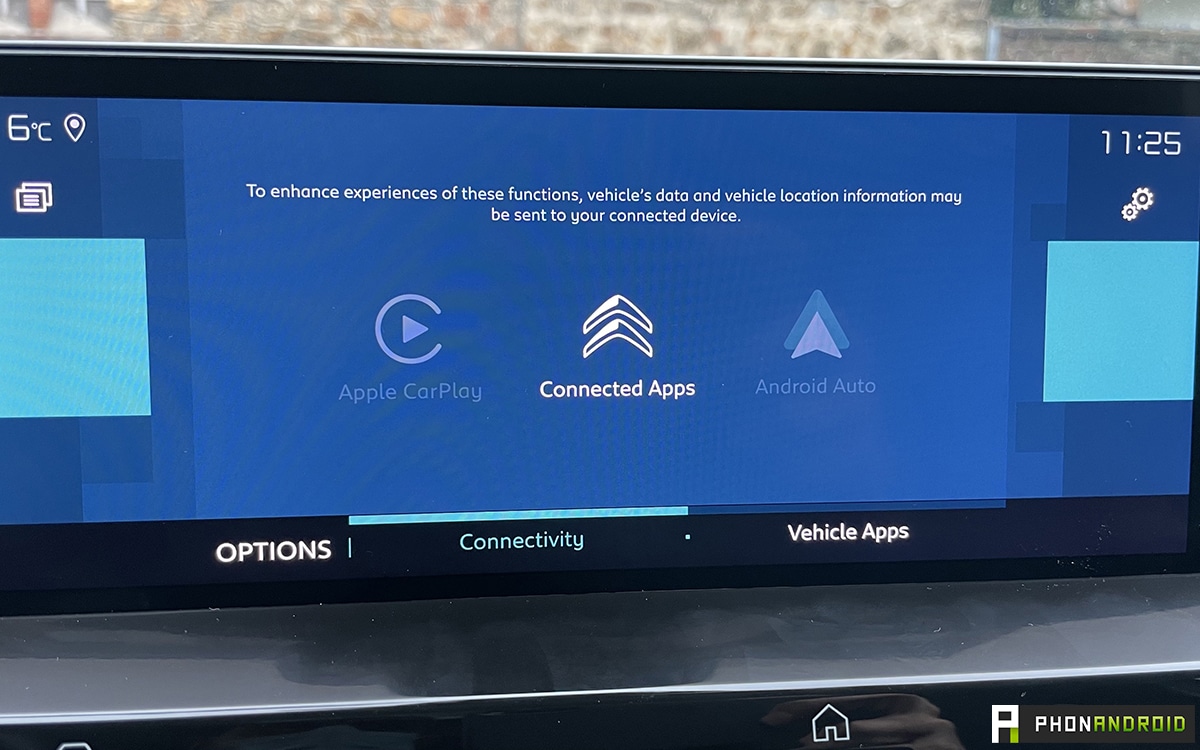 All in width, like those integrated in BMW cars for example, the infotainment screen again displays an interface from another era and not particularly intuitive. Anyway, this one does not require either to dive into the manual of the vehicle to get out of it and a few minutes will be enough to find its marks. 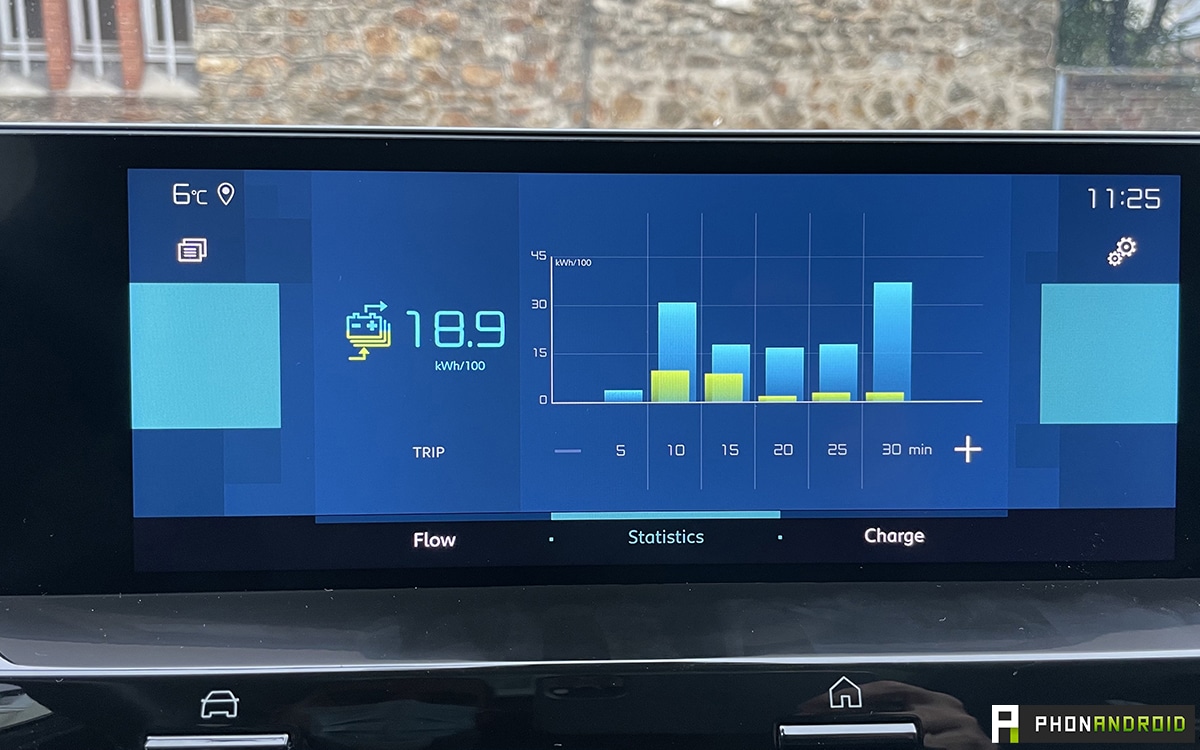 Moreover, the Citroën ë-C4 is also compatible with Apple CarPlay and Android Auto. But not in wireless version unfortunately. Too bad, because a location is dedicated to charging the smartphone by induction. Moreover, two USB ports are integrated in the center console, a type A and a type C. But only the latter can take advantage of the data mode and therefore of CarPlay or Android Auto. It will therefore be necessary to provide a suitable USB cable. Two additional USB cables Type A and Type C are also provided for the rear seats. 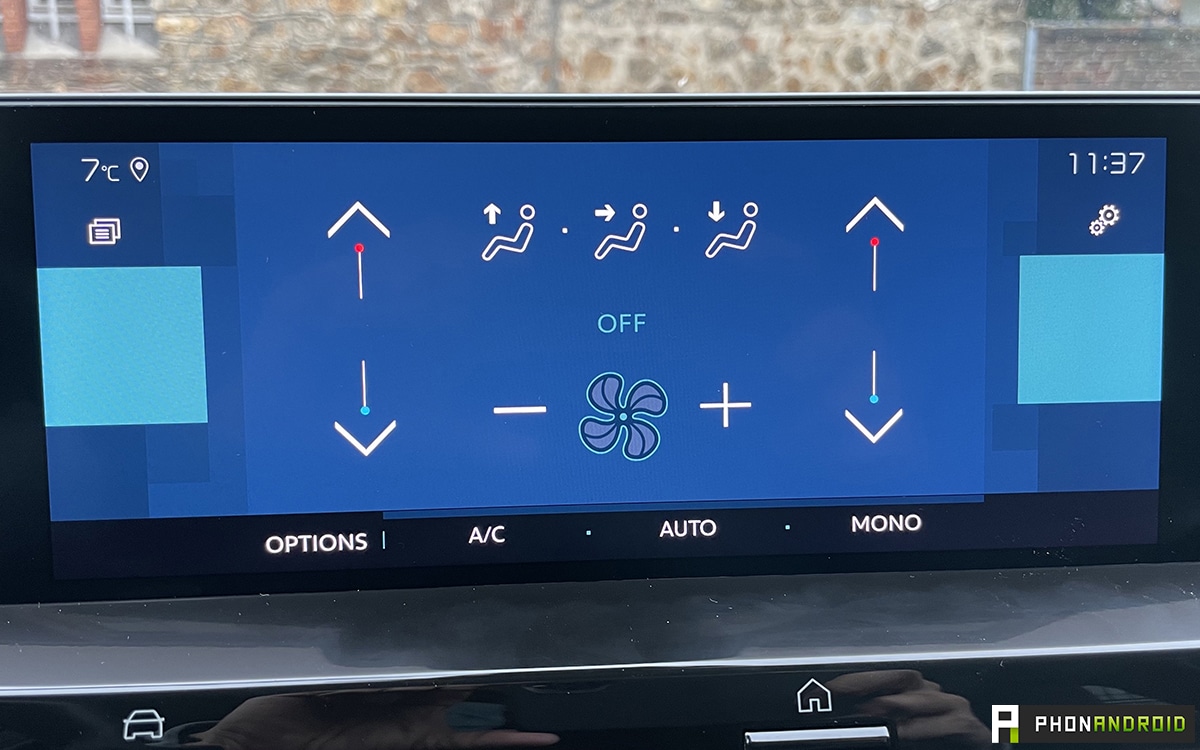 The buttons remain relevant for the heated seats, the heated steering wheel (with impractical access at the bottom behind the steering wheel), not to mention the air conditioning controls. At least in part, the choice of air flow direction is made via the infotainment touchscreen. 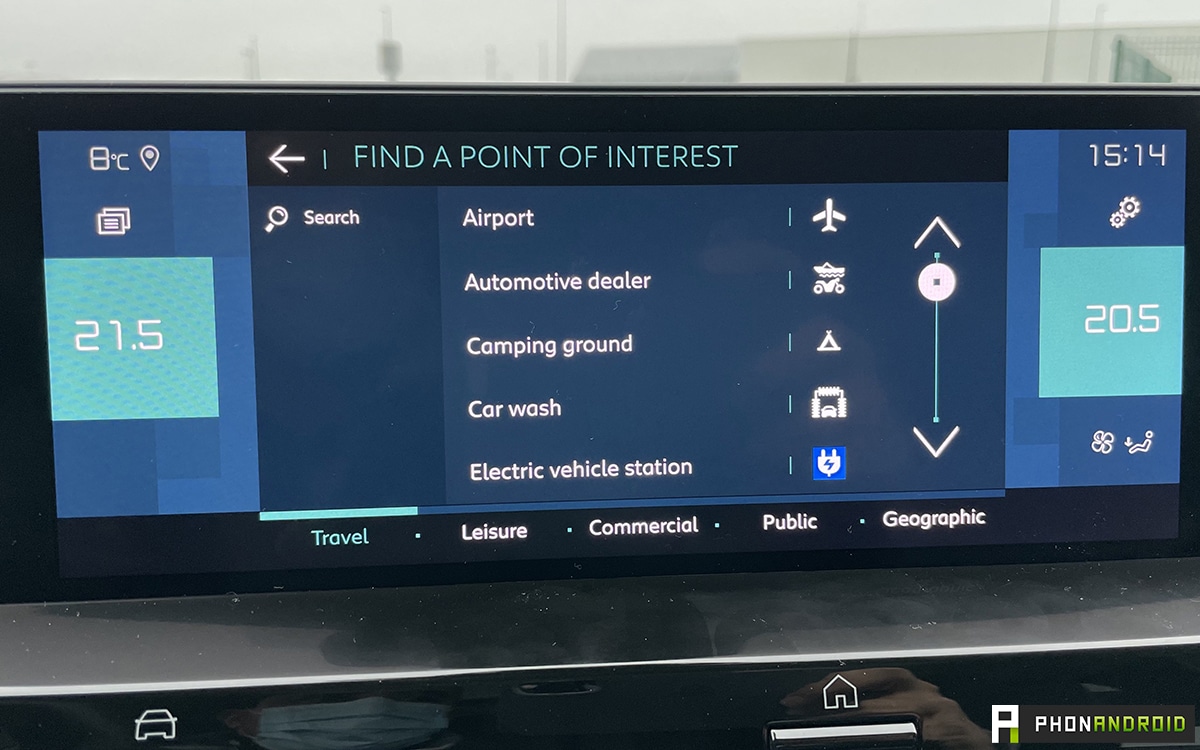 The three-spoke steering wheel also sports buttons to manage music and calls on the right, and activate the limiter and adaptive cruise control on the left.

Plenty of storage for the Citroën ë-C4

Before moving to the rear, another word on the driving position which benefits from a seat electrically adjustable in height and inclination, but not in length. A massage function is also available as is the lumbar adjustment. The passenger is worse off with a manually adjustable seat.

It can nevertheless be consoled with the many storage spaces available. The glove box, which is very deep, is surmounted by an additional space that can accommodate various objects and even a tablet. Above is a small retractable support on which you can hang your tablet. Original. 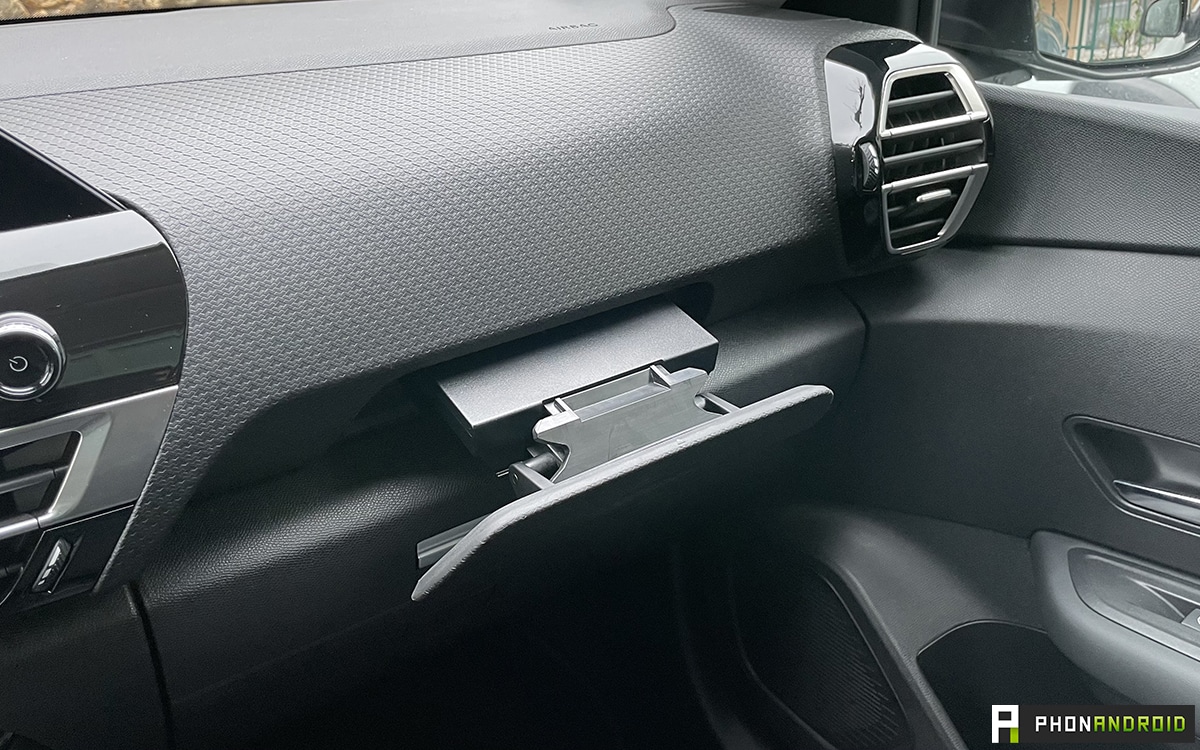 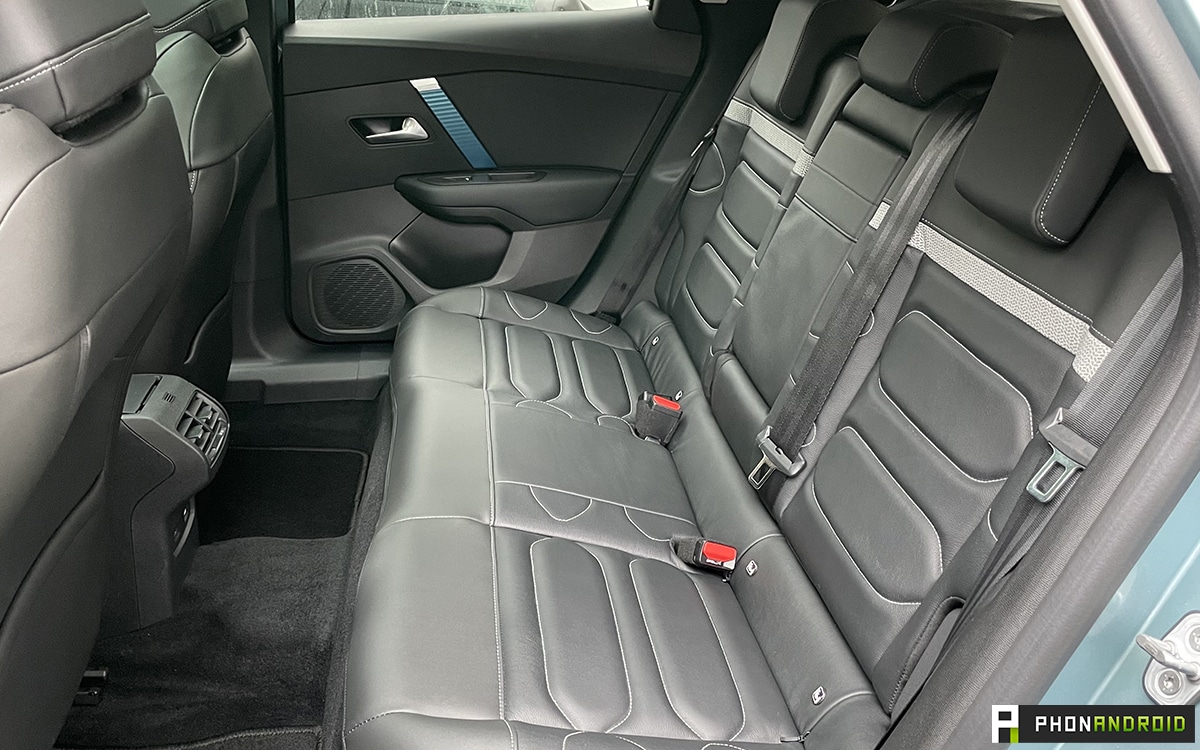 The rear seats take advantage of sufficient knee room, but headroom is limited due to the coupe’s leaky roof. In addition, a small central tunnel remains at the level of the middle square.

The trunk offers a volume identical to the last thermal C4 with 380 liters and a double in addition to the space intended to accommodate the charging cables. 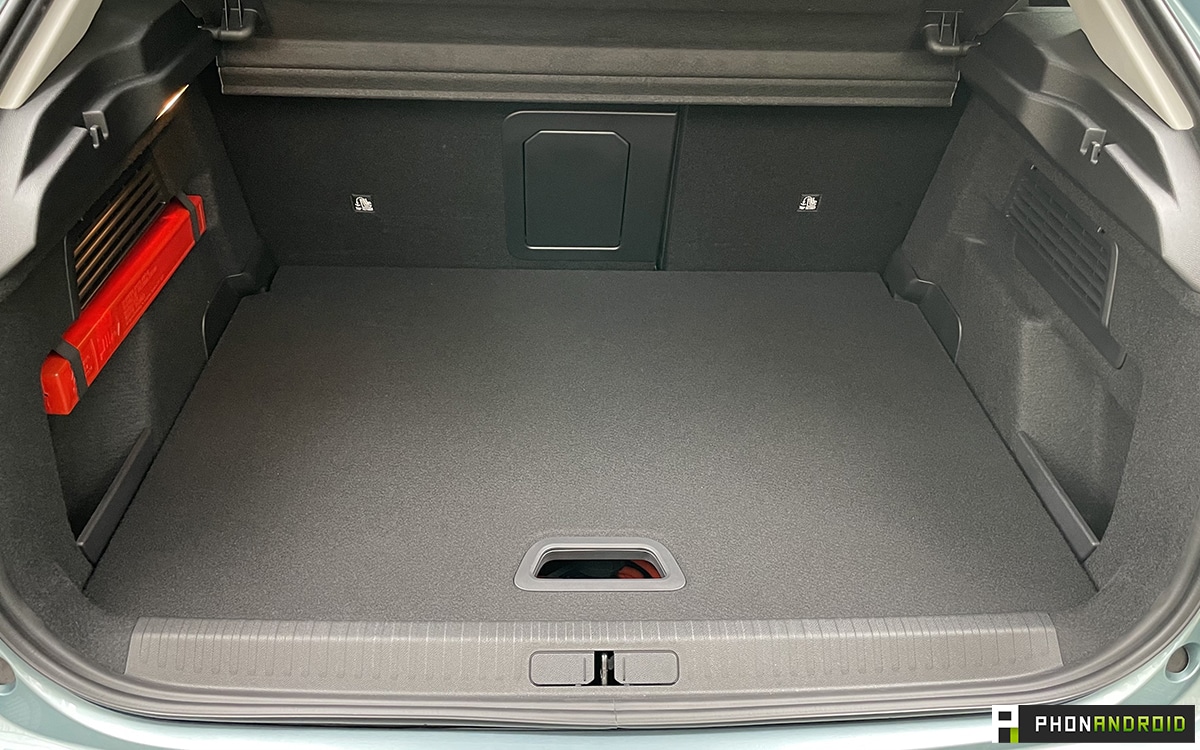 The Citroën ë-C4 has the same mechanical configuration as the other electric cars of the PSA group which are also based on the e-CMP platform. The electric motor which is installed on the front axle delivers 136 hp in sport mode. The power goes to 109 hp in normal mode, and only 82 hp in Eco mode which also restricts the comfort functions. Note that switching from one mode to another does not change the display on the instrumentation screen, too bad. However, the latter is not unpleasant in town thanks to the 1,500 kg of the Citroën ë-C4. Relatively low weight for an electric car. 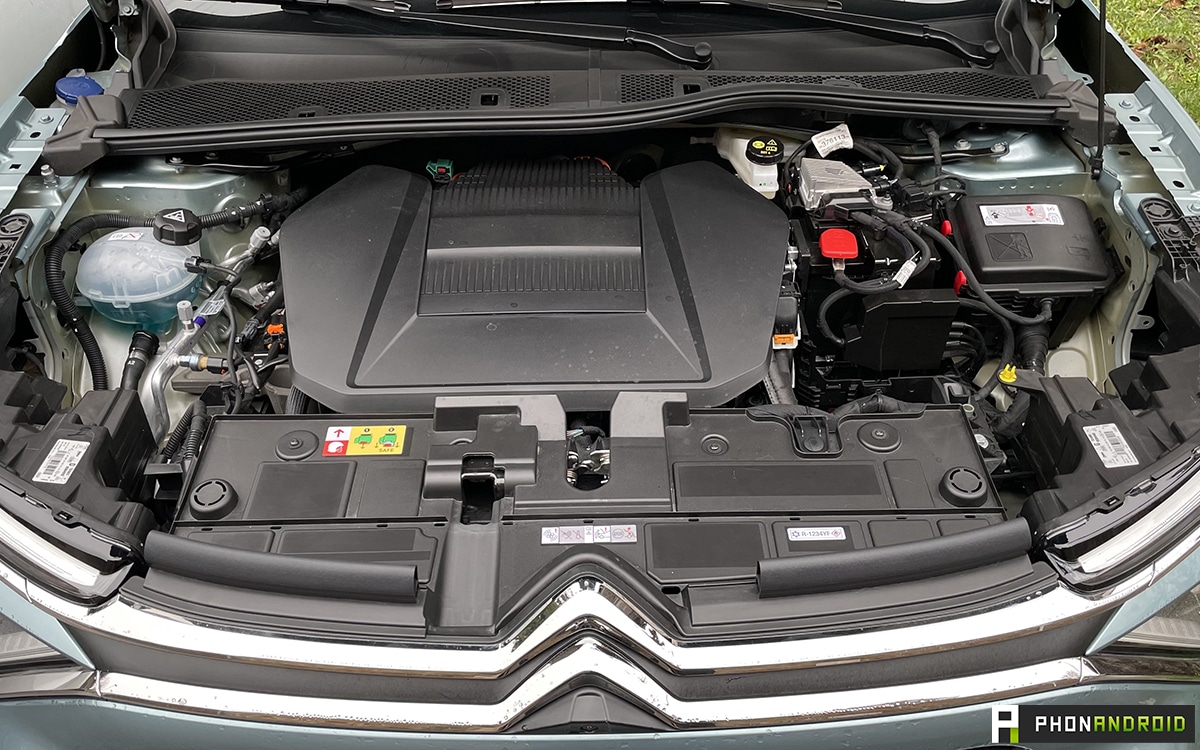 The electric motor is powered by a 50 kWh battery, of which 46.2 kWh are useful. The same as that which equips the other electric cars of the PSA group once again. The announced autonomy is 350 km following the WLTP homologation cycle. 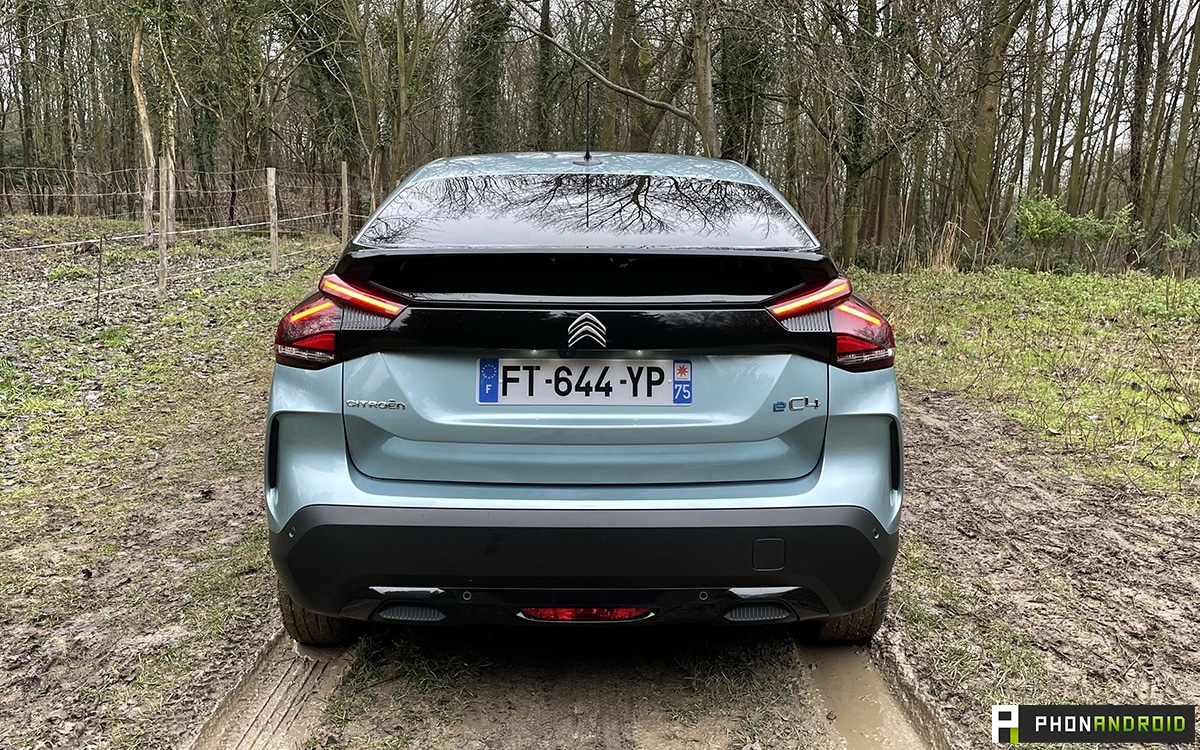 In addition to the Normal, Sport and Eco driving modes, the Citroën ë-C4 has the essential B (Brake) mode which makes it possible to recover energy when the car decelerates and to partially recharge the battery. This is enough to slow the vehicle down, but not to a complete stop while driving only one pedal. 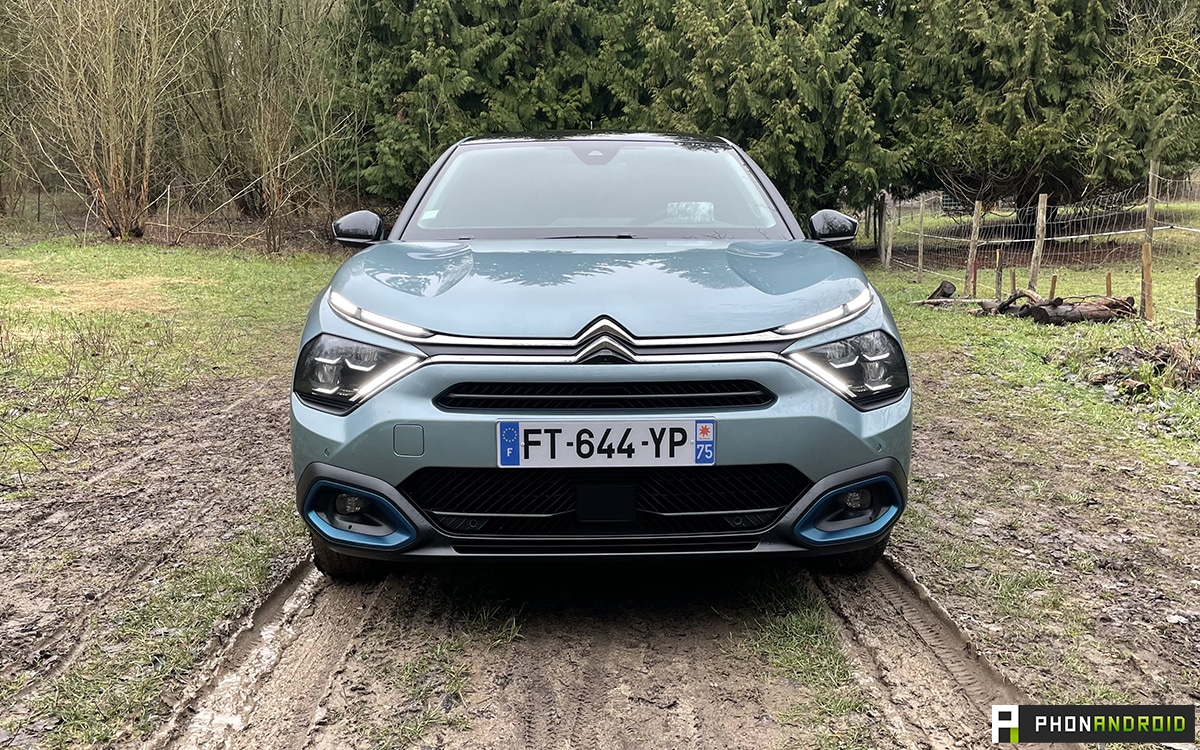 During our test in the Paris region, we noted an average consumption of just under 20 kWh / 100 km when driving with Eco mode and B mode activated. Conditions were not ideal for electric driving with half the route on the highway, and rainy weather with a temperature between 5 and 7 ° C. The heating was set to a temperature of 21 ° C, and we limited our speed to 110 km / h, the legal maximum on the course. Under these conditions, the Citroën ë-C4 should offer a range of around 250 km., which is more than enough for most of the daily trips in France. 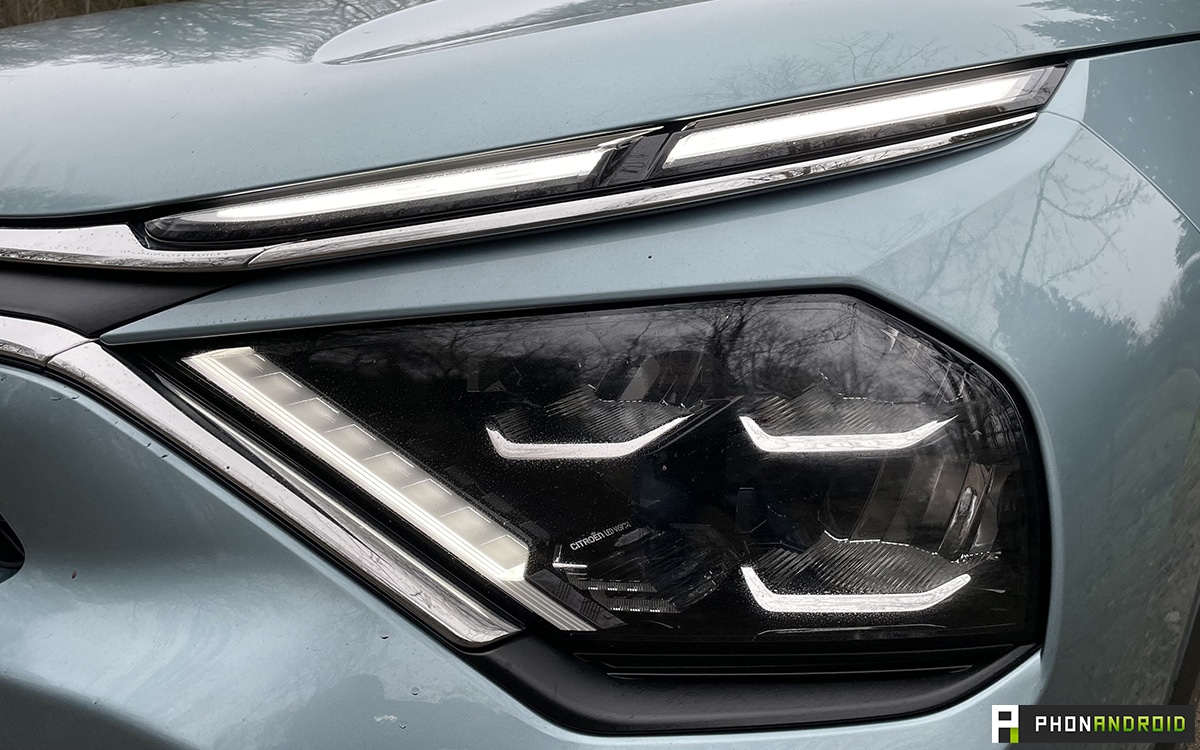 Citroën trademark, the comfort of the Citroën ë-C4 is exemplary, despite the additional weight of the battery, and thanks to the suspensions with progressive hydraulic stops. The vehicle is silent with air noises contained on motorways up to 110 km / h. The driving aids are effective even if the lane keeping aid had a few misfires that it was easy to correct by remaining attentive. Adaptive cruise control takes the strain off the driver when driving on the motorway, and sign recognition is always useful. On the other hand the regulator is not able to adapt the speed of the Citroën ë-C4 according to the changes of limitation. 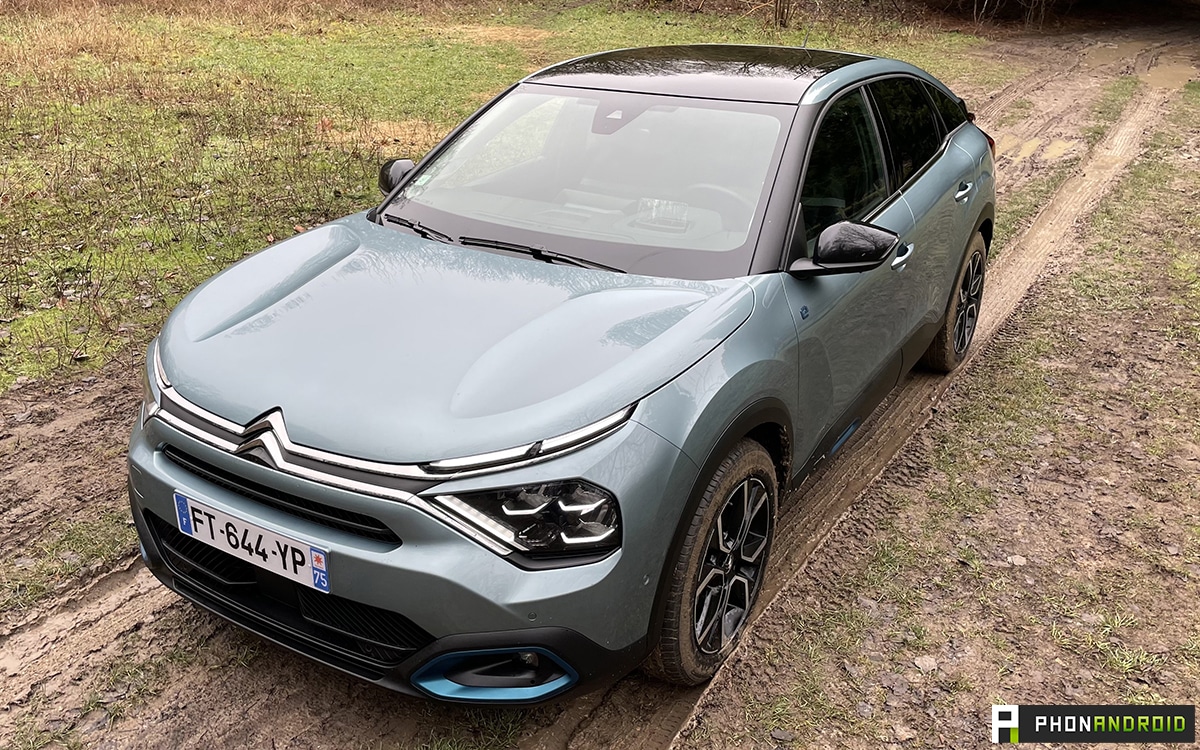 Without sticking the driver to the seat, acceleration and recovery are more than sufficient in Sport mode. The speed is nevertheless limited to 150 km / h and thee 0 to 100 km / h is shot in less than ten seconds. 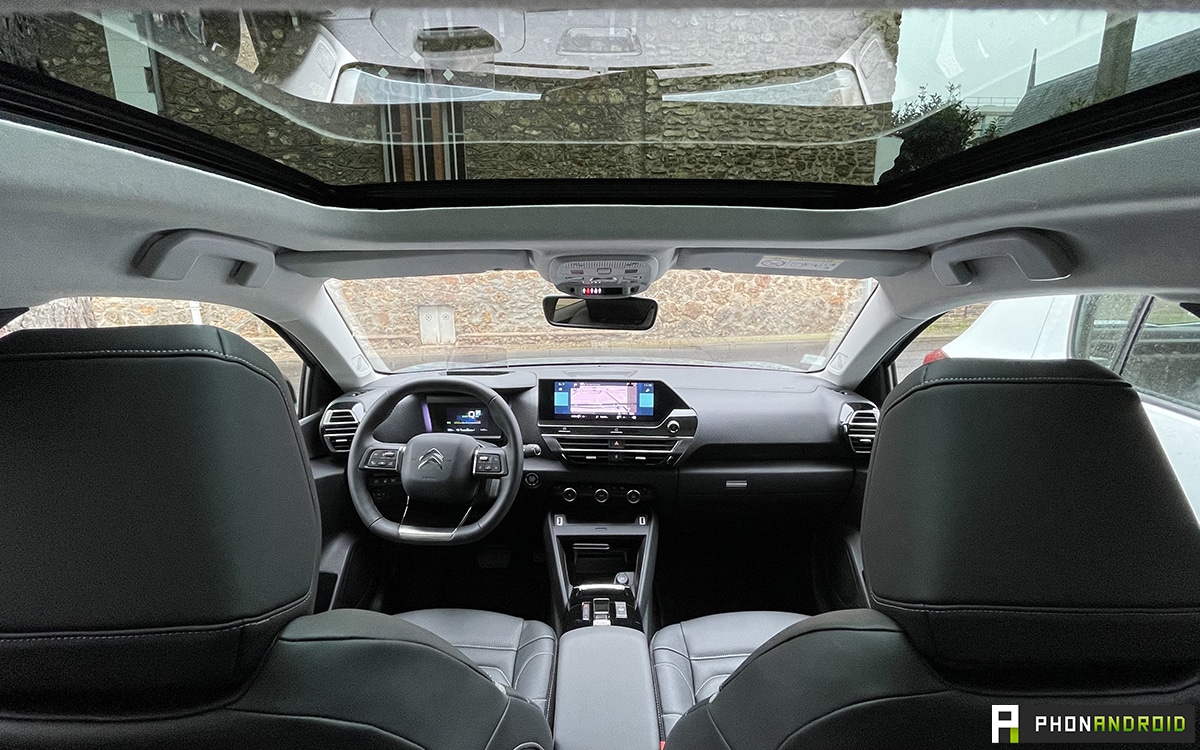 The Citroën ë-C4 is equipped with a 7.4 kW charger as standard. Thus equipped, the car requires 7:30 a.m. for a full recharge from a Wallbox. The manufacturer offers an optional 11 kW charger which saves 2.5 hours. 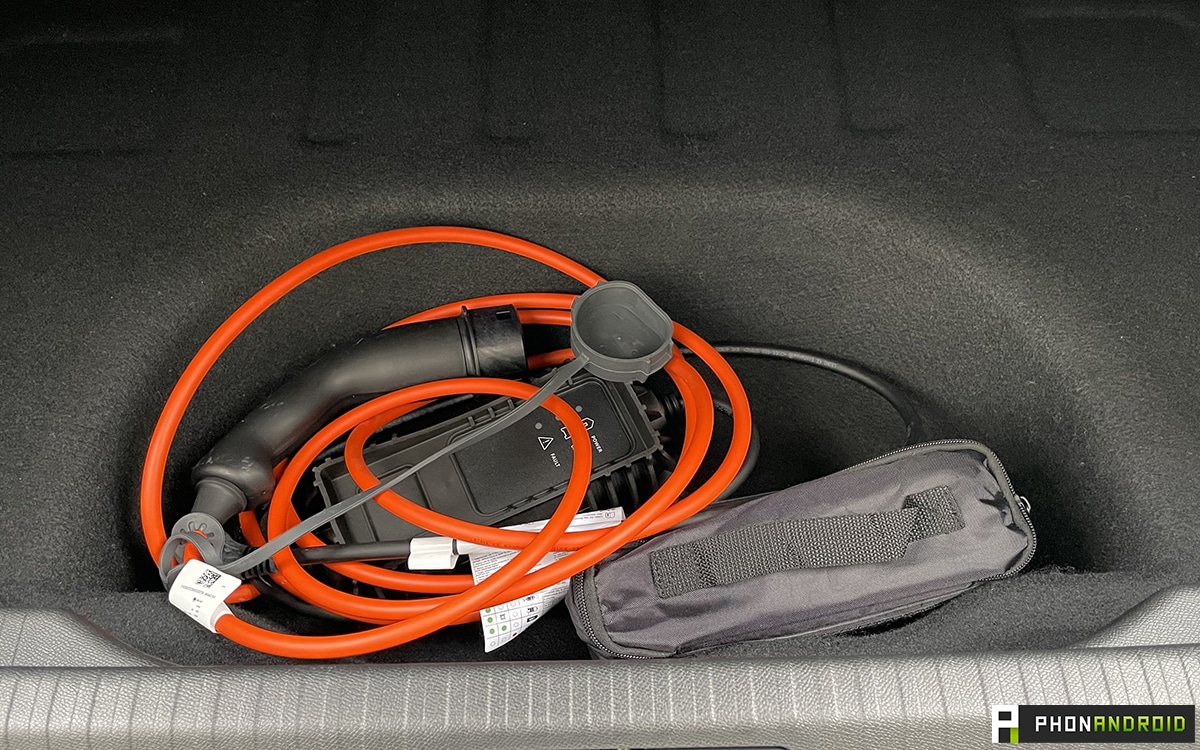 Those in a hurry will turn to the DC fast charging stations. To do this, the Citroën ë-C4 is equipped with a CSS combo connector which recharges the battery to 80% in 30 minutes with a maximum power of 100 kW. 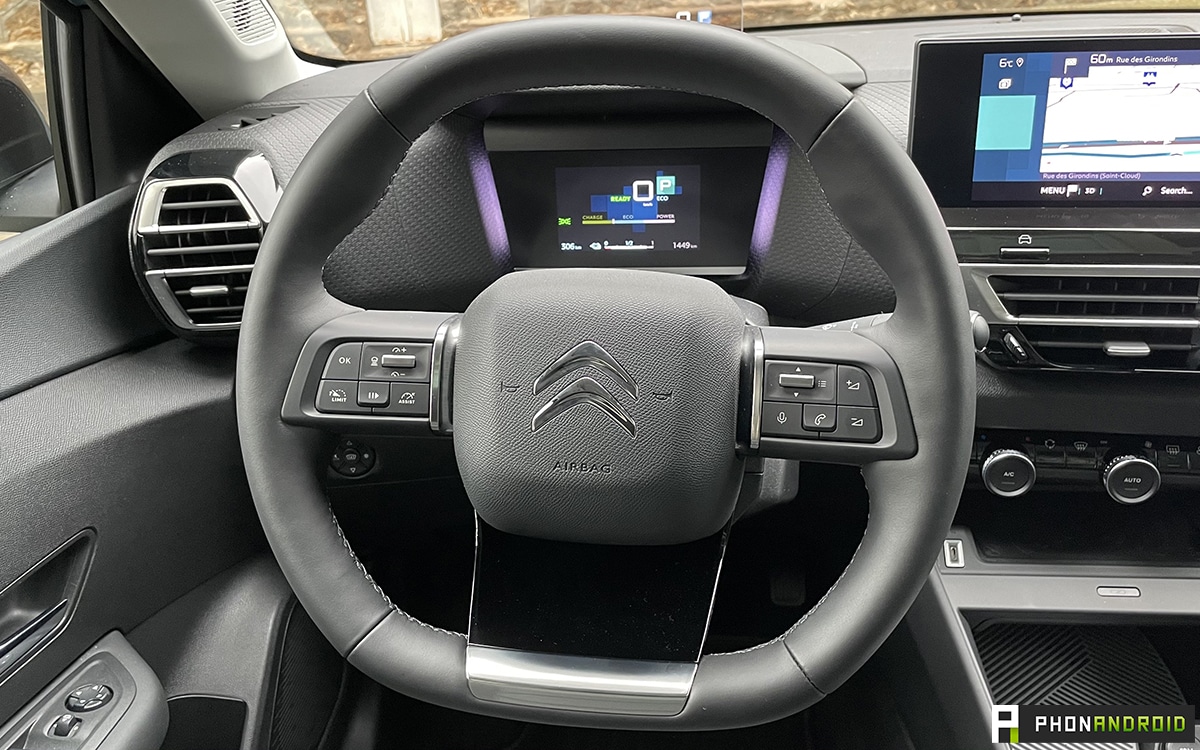