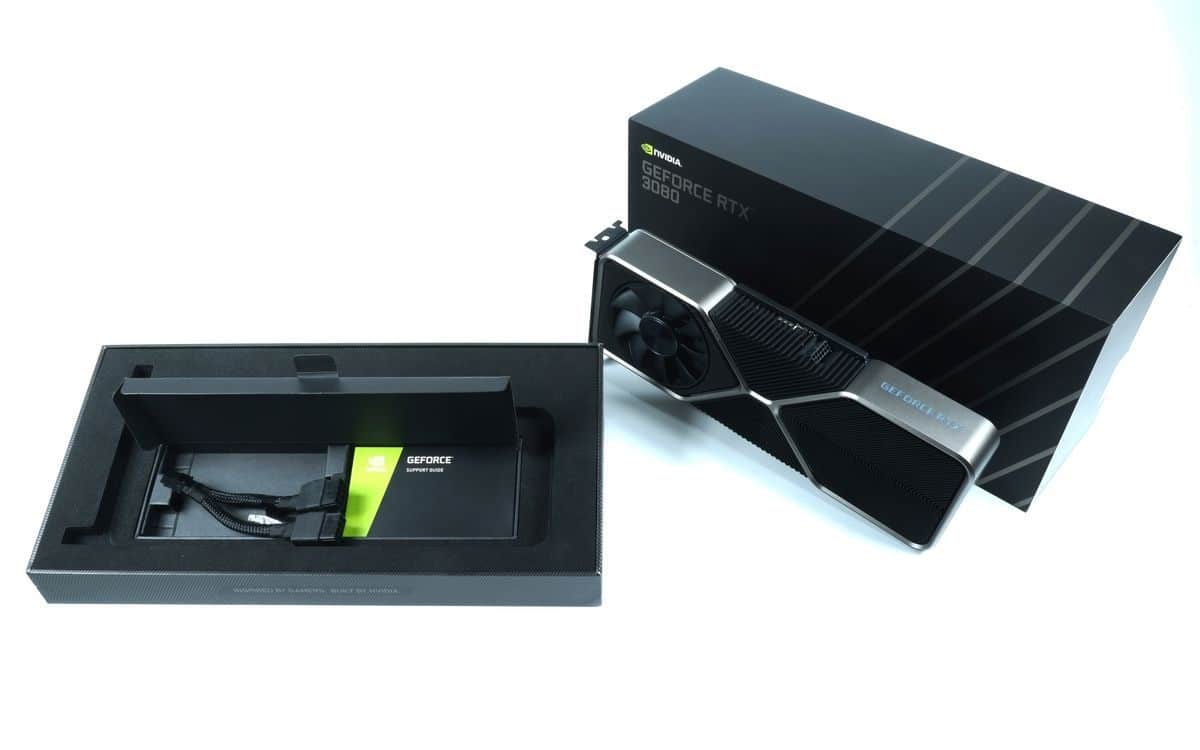 The GeForce RTX 3080 is the new flagship of the RTX 30XX series from Nvidia. A real leap forward compared to the previous generation, this card brings unprecedented power, in addition to finally democratizing technologies such as ray-tracing or DLSS 2. But what is it really worth in the game?

Two years ago, Nvidia released its GeForce RTX 20XX series graphics card series. A real leap forward, these cards have brought ray-tracing technology to the world of video games. A small revolution which has not yet shown its maturity, however, since it remains very marginal. Few games are indeed compatible with ray-tracing.t this is very resource intensive, drastically reducing the number of images per second on some full HD titles. At the beginning of September 2020, Nvidia introduced its new generation of graphics card to correct these concerns: the RTX 30XX series. 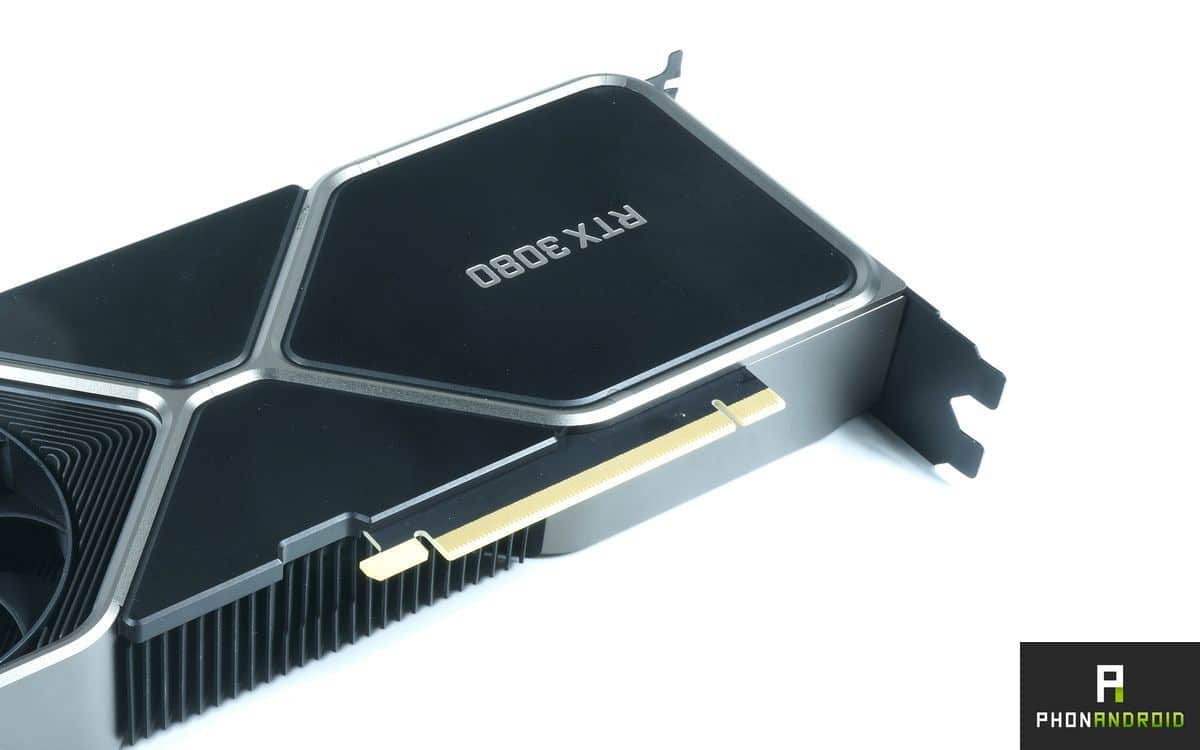 Three new cards have been unveiled: the RTX 3070 (519 euros), the cheapest product, the RTX 3090 (1549 euros) dedicated to the most demanding and designed for 8K gaming which will become more popular in the years to come, and the RTX 3080. The latter, sold for 719 euros, is thought to be the new flagship of Nvidia. Expensive but not too much, it promises better performance than the RTX 2080 Ti, which is sold twice as expensive. Note that with these three products, NVIDIA is introducing its new Ampere architecture, which is based on a chip engraved at 8 nm by Samsung and which promises greater computing power at the level of AI, in particular with its 28 billion transistors.

Please note that our test was carried out in partnership with Tom’s Hardware and Igor’s Lab. The benchmarks as well as the various measures are therefore common. Here is the version Founder’s Edition which went through the lab. The different manufacturers will obviously offer their custom version soon, with performance that could vary slightly.

Our full test of the GeForce RTX 3080 in video

Nvidia promises a more powerful graphics card than the RTX 2080 Ti for half the price. For this, Nvidia has improved its product in all areas, by offering a 10 GB GDDR6X memory. The GPU has 8704 CUDA cores (against 4352 for the RTX 2080 Ti) with a base frequency of 1.4 GHz and a boost frequency of 1.71 GHz (against 1.3 GHz and 1.6 GHz for the 2080 Ti) . We have a power of 58 Teraflops for ray-tracing. It consumes 350 Watts, and Nvidia specifies that it is preferable a power supply of 750 Watts minimum. A new 12 pin connector sits on the board and an 8 pin adapter is provided in the box. 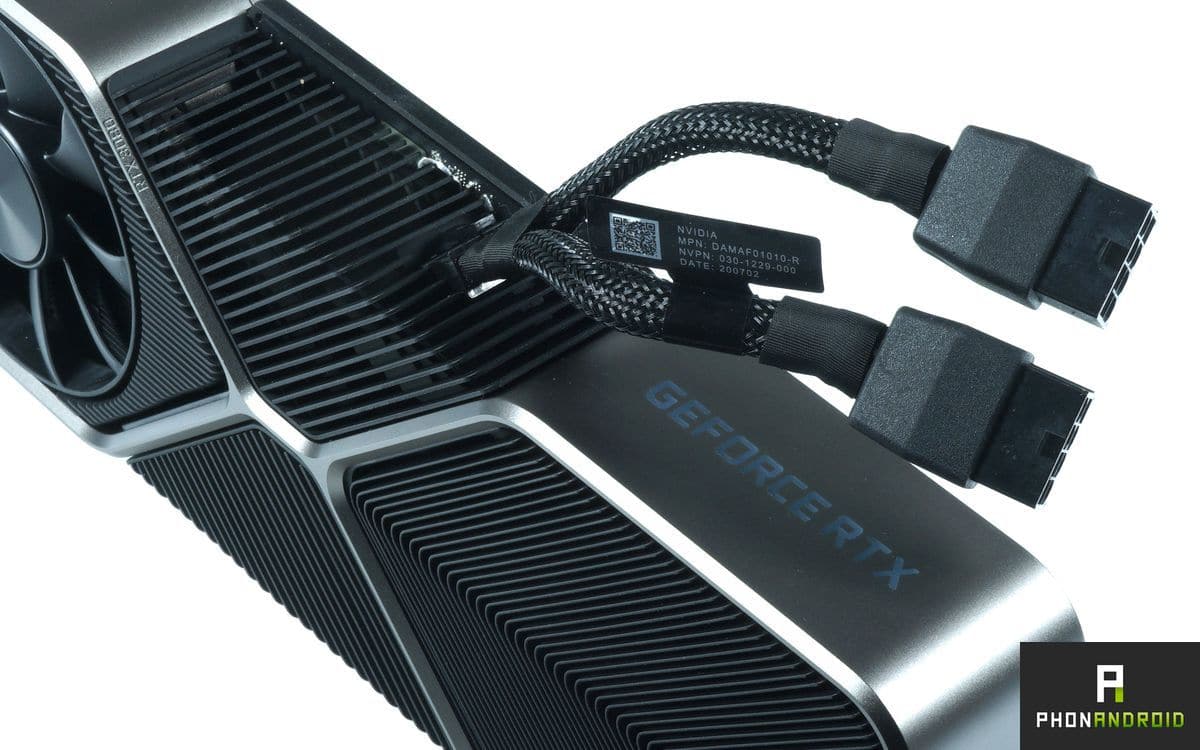 The card is obviously equipped with a PCIe Express 4.0 connector. For rear connectivity we have one HDMI 2.1 port as well as three DisplayPort 1.4a. We note in passing the disappearance of the USB Type-C port, present on the previous generation. Regarding its size, it is 112 mm wide and 285 mm long, and requires two slots. A standard size that fits most recent towers on the market, unlike the 3090, much, much larger. 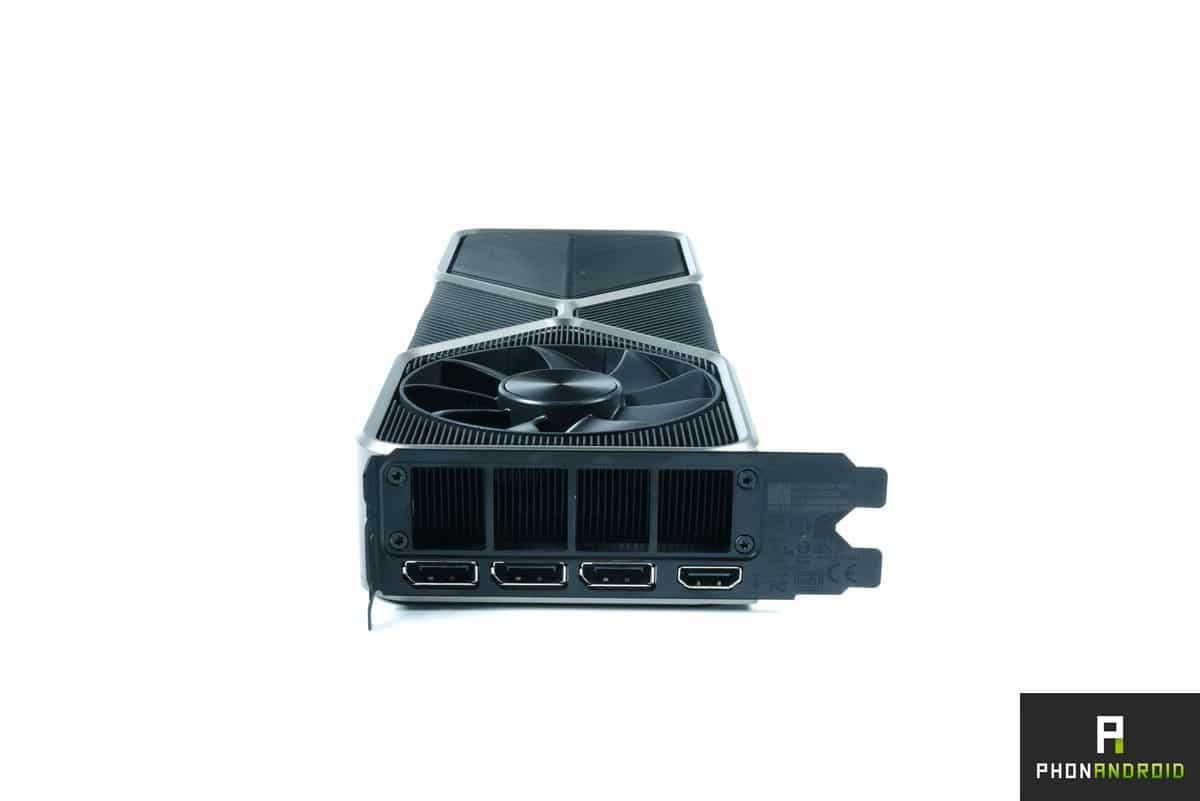 This map also allows, obviously, to display ray-tracing in real time on the titles taking it into account (dynamic light management), and is also compatible with Nvidia’s DLSS 2.0 system, which helps sharpen picture and increase game framerate using AI. With such power, Nvidia seeks to democratize gaming in 4K / 60 fps. We will see if the promise is kept by the manufacturer.

Nvidia has changed the design of its card on a few points. So, the first thing you notice is of course the arrangement of fans. On the previous generation, the two vents were located on the same side. 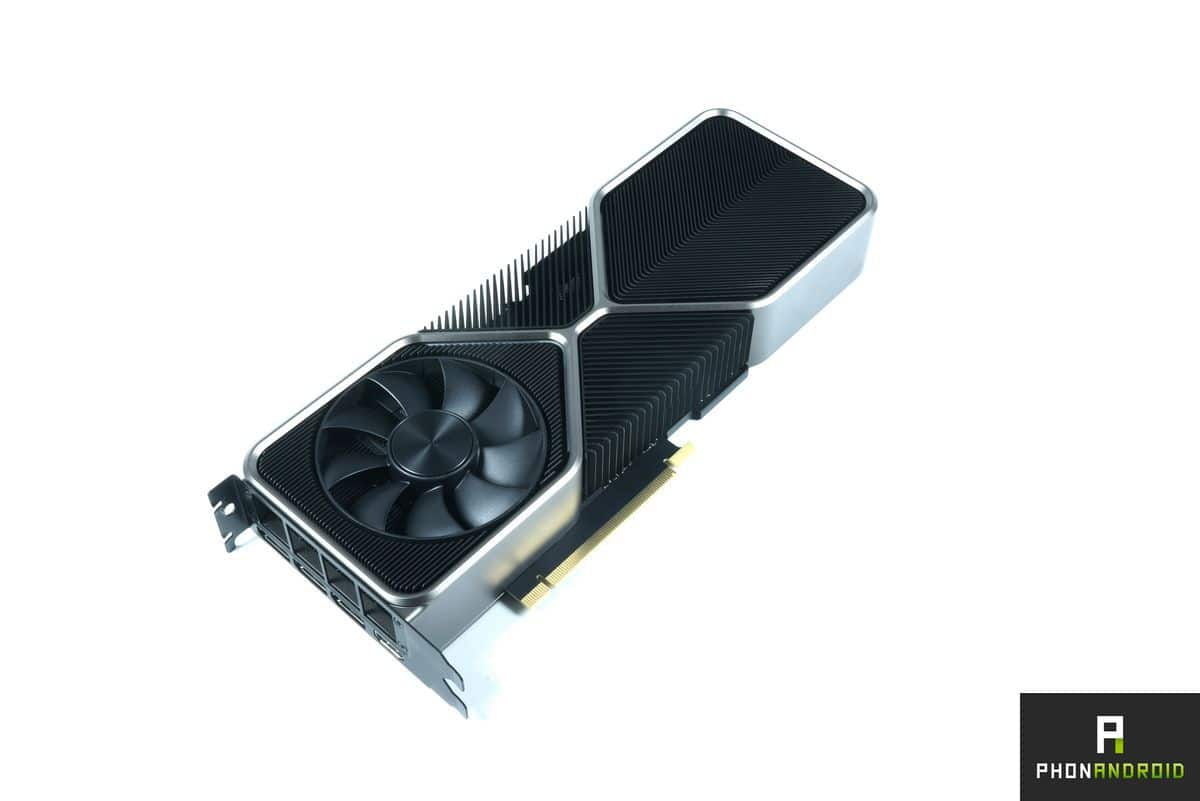 For the RTX 3080 (and the others), Nvidia chose a different design. Here we have a fan on each side. The consequence of this choice is that two air flows pass through the card directly within it. With such engineering, Nvidia can cool its card much more efficiently (-20% heat compared to the previous series) and thus gain power. Note that if part of the hot air is expelled into the tower, the card also evacuates the heat directly to the outside thanks to a ventilation at the back, at the level of the connectors. 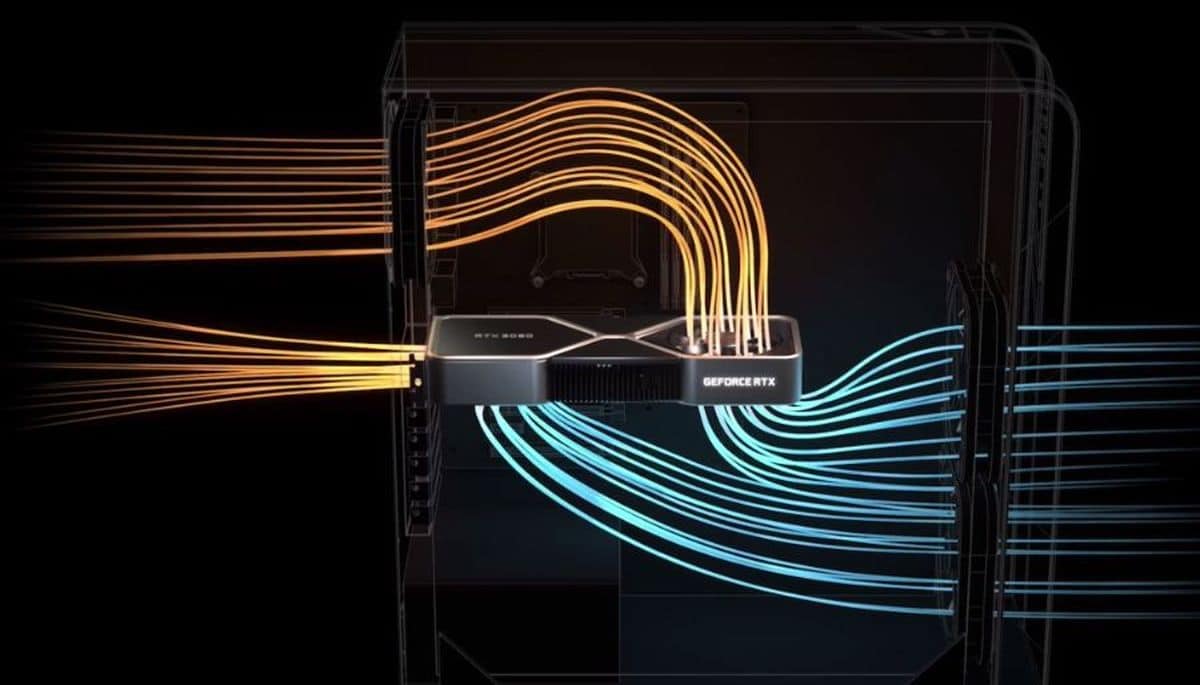 This ventilation helps keep the card cool, since during our tests, namely running The Witcher 3 in UHD for 20 minutes, the GPU temperature stabilized at 75 degrees with a stable rate of 2.2 GHz. Note that our computer was closed in this specific case. This controlled temperature is not counterbalanced by the omnipresent noise of the fans. In fact, under the same conditions, they have released only 38 decibels on average. This is equivalent to the noise made by fans on an ultraportable. Suffice to say that you will not hear your 3080 hiss in the game. A very good thing. 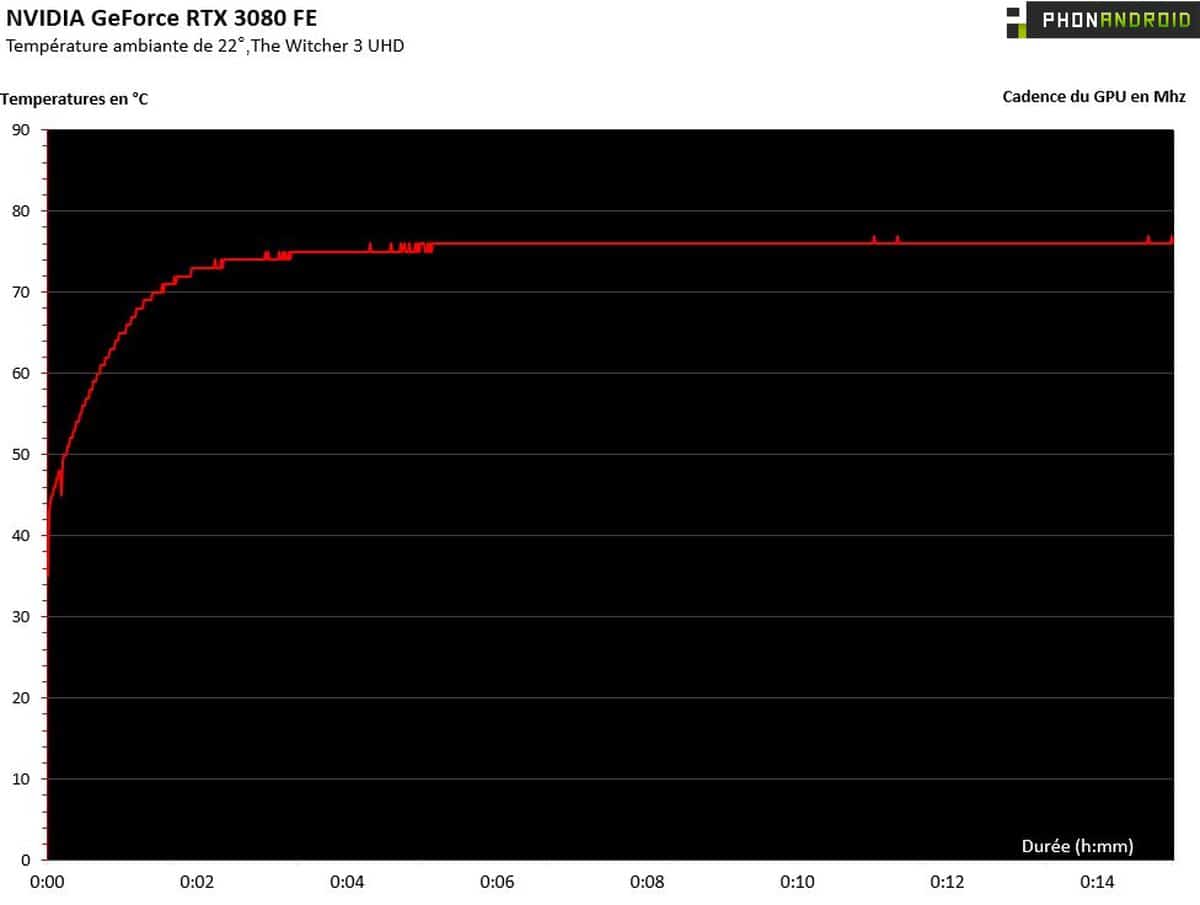 Note that the 12-pin connector (against 8 pins previously) for the power supply has changed places. Located sideways to the back on the 20XX series, this time it goes right in the middle of the map. This allows easier access, but could cause minor “cable management” issues. The more manic will have to rearrange the inside of their tower taking into account this thread which will have to go that far. There is an adapter present in the box. 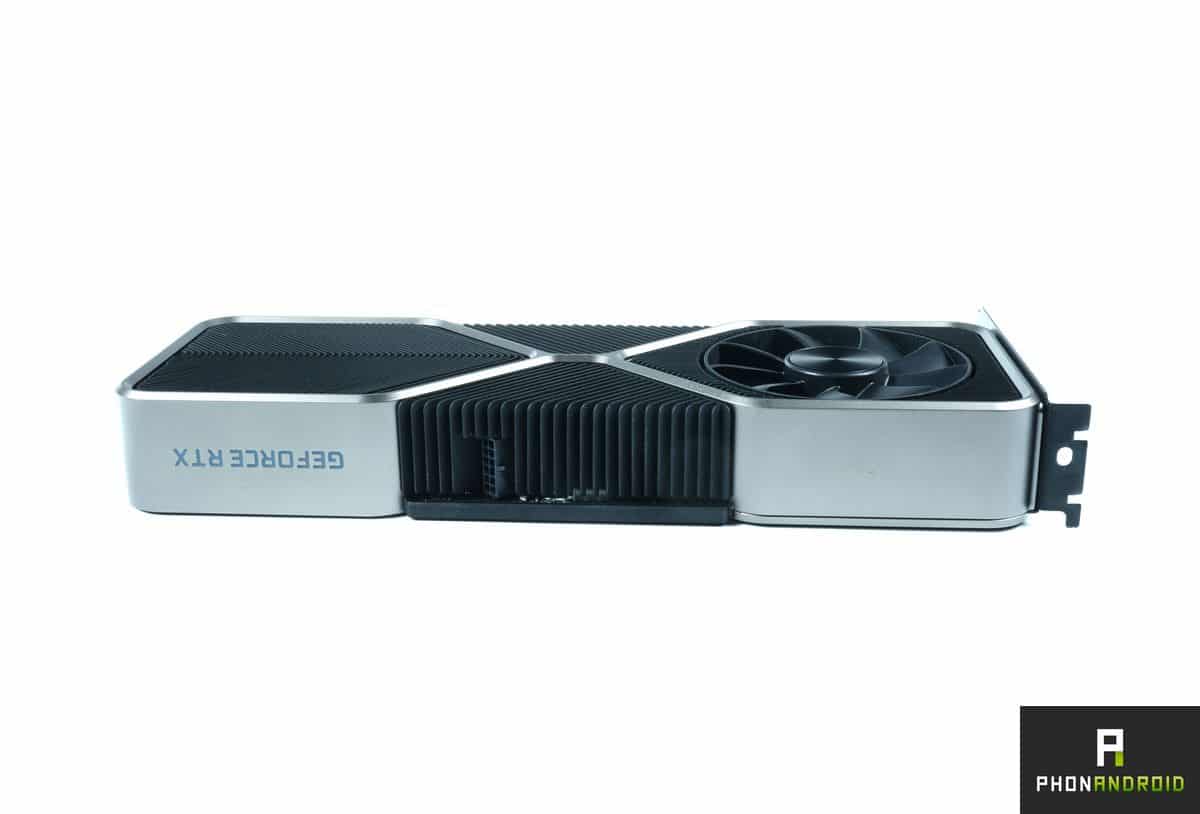 Visually, the card is better worked than the previous generation before an imposing aluminum frame, arrow-shaped coolers and above all a design pleasing to the eye all in an angle. Those who like to display their components will appreciate it.

In game, the RTX 3080 brings a real evolution compared to previous models, widening a huge gap compared to the RTX 20XX series. The games are more fluid and none of the titles tested for our panel does go down to an average of less than 60 frames per secondeven in the most extreme conditions.

Please note that we performed these tests with a machine equipped with an AMD Ryzen 9 3900XT processor supported by 32 GB of RAM. The games were installed on an NVMe SSD.

During our full HD test session, the card kept its promises. On Horizon Zero Dawn, the 3080 is for example twice as powerful as the RTX 2080 and 2070 Super, and there is an improvement of 25% compared to the 2080 Ti. This data is less obvious on other titles, like Metro Exodus. In full HD and with maximum settings, we gain 25% power compared to the RTX 2080 Super, and 12% compared to the 2080 Ti. The game with ray-tracing activated since here more and more fluid with an average of 85 frames per second on average and drops to 54 frames per second. It should be noted that these falls are to be taken into account. You will never fall below this in-game score. You will therefore not be faced with nasty framerate drops during graphically demanding moments. 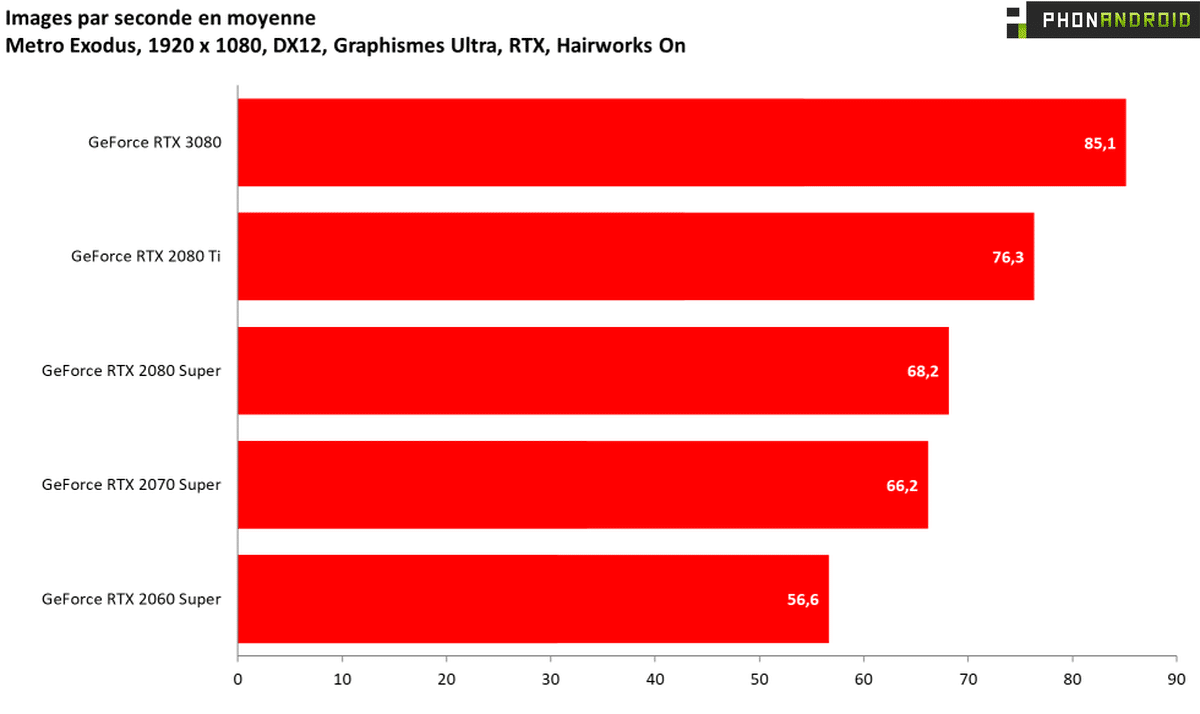 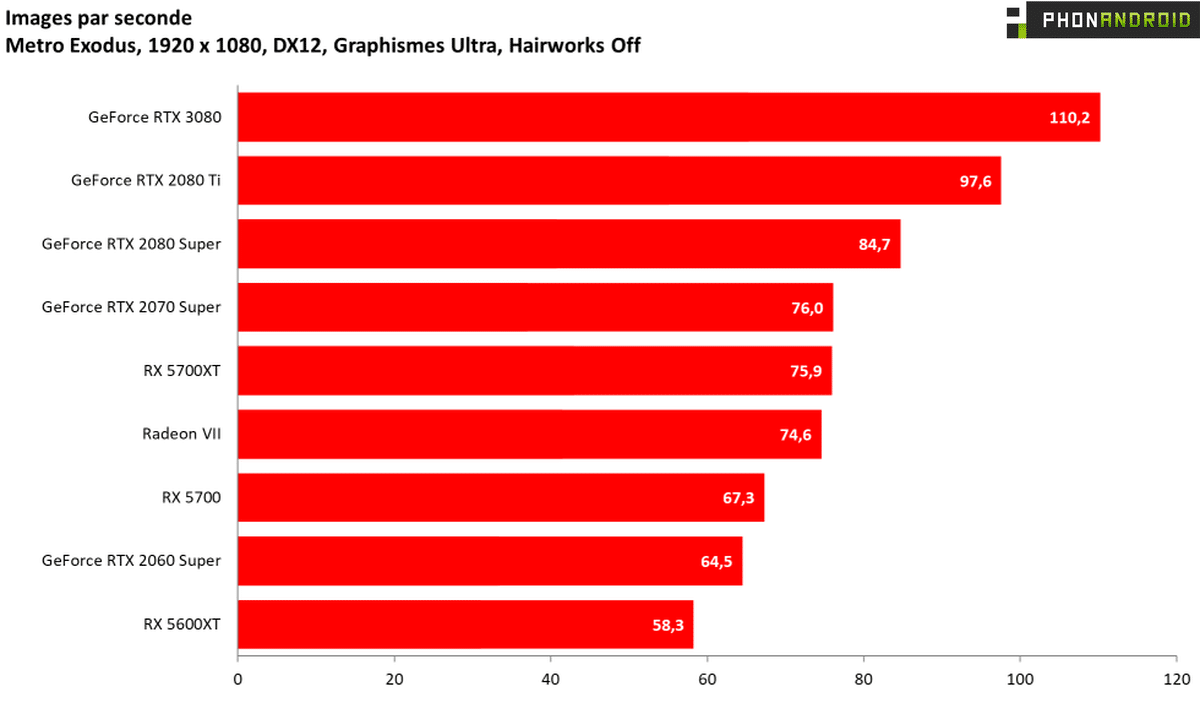 We performed the same tests, but this time with a definition of 2560 x 1440 pixels and the settings of the different games tested above. The results obtained are similar: 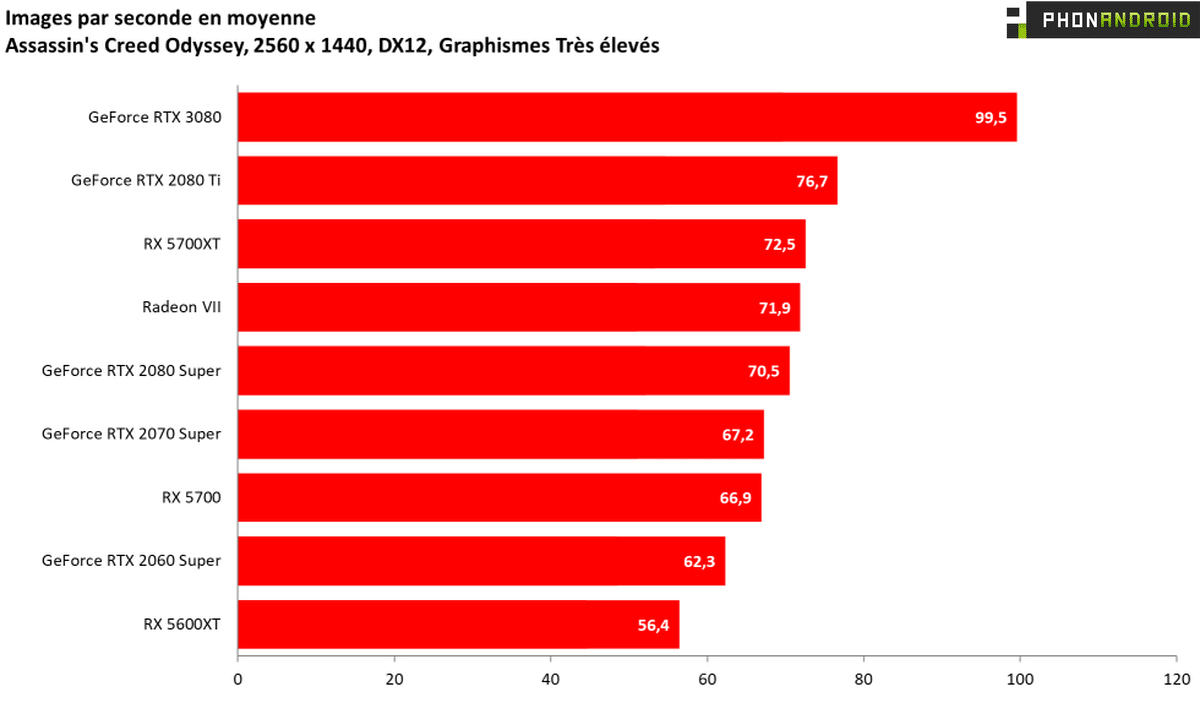 Finally, we also tested the same panel of games, but this time with a definition in 4K. Here again, we have a strong progression compared to the previous generation. The RTX allows you to play serenely in this definition without ever falling below the bar of the sacrosanct 60 frames per second. On games with DLSS 2 enabled, such as Shadow of the Tomb Raider, the card allows to gain 10% of power during the sessions. 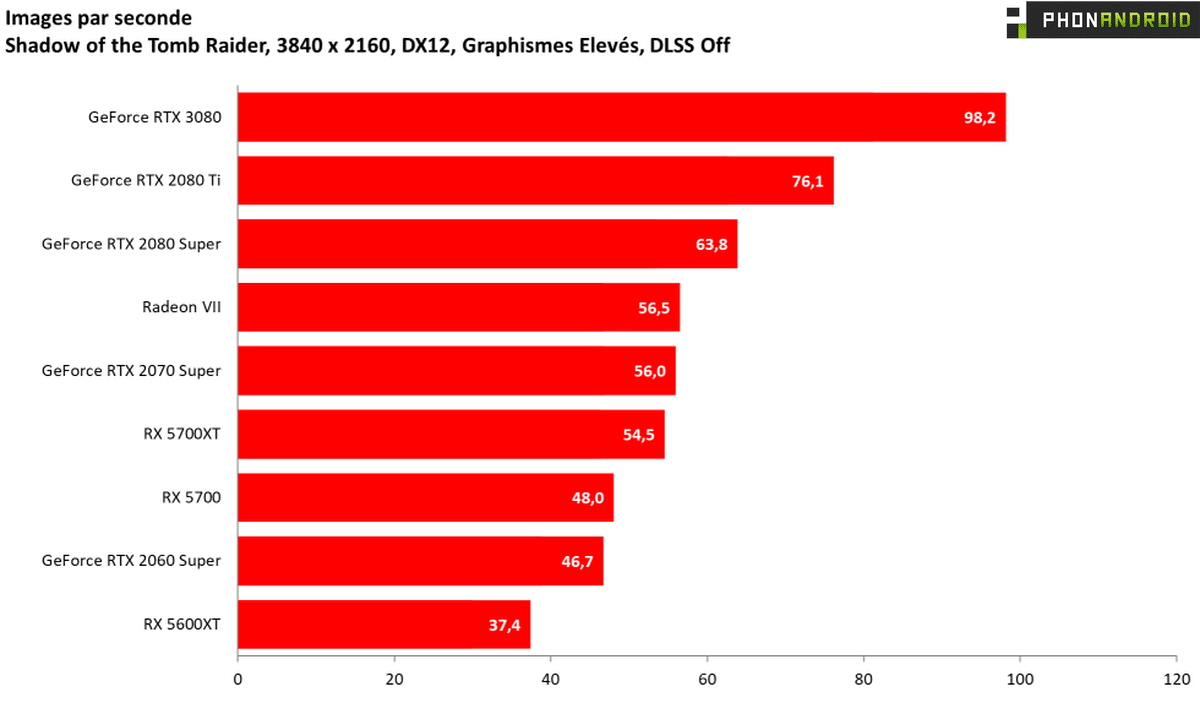 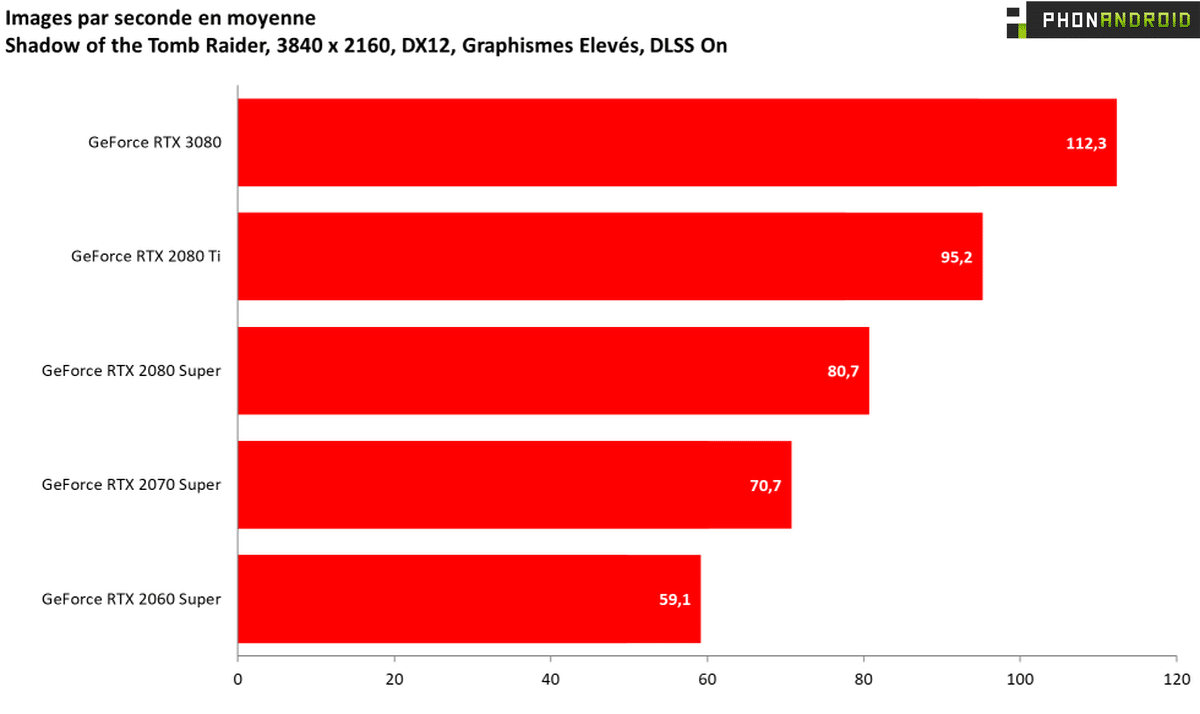 Who says more power means more consumption. Unsurprisingly, the card shows a lot more energy intensive than the previous ones, more even than any other card on the market. During game phases, the 3080 consumes between 300 watts and 330 watts on average (15 in standby), according to the titles and definitions applied. Correlated with the performances quoted above, the results are not delusional and we are here in the face of energy consumption which is certainly significant, but justified. Here is the consumption of the panel’s games in 4K: 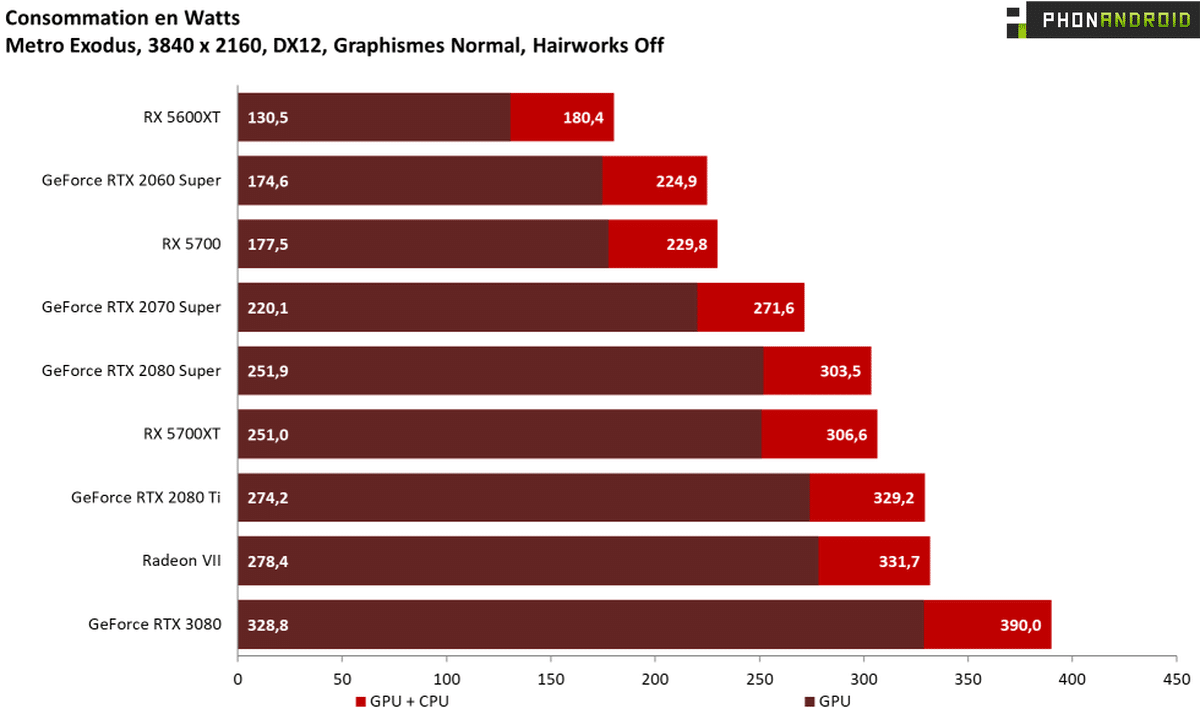