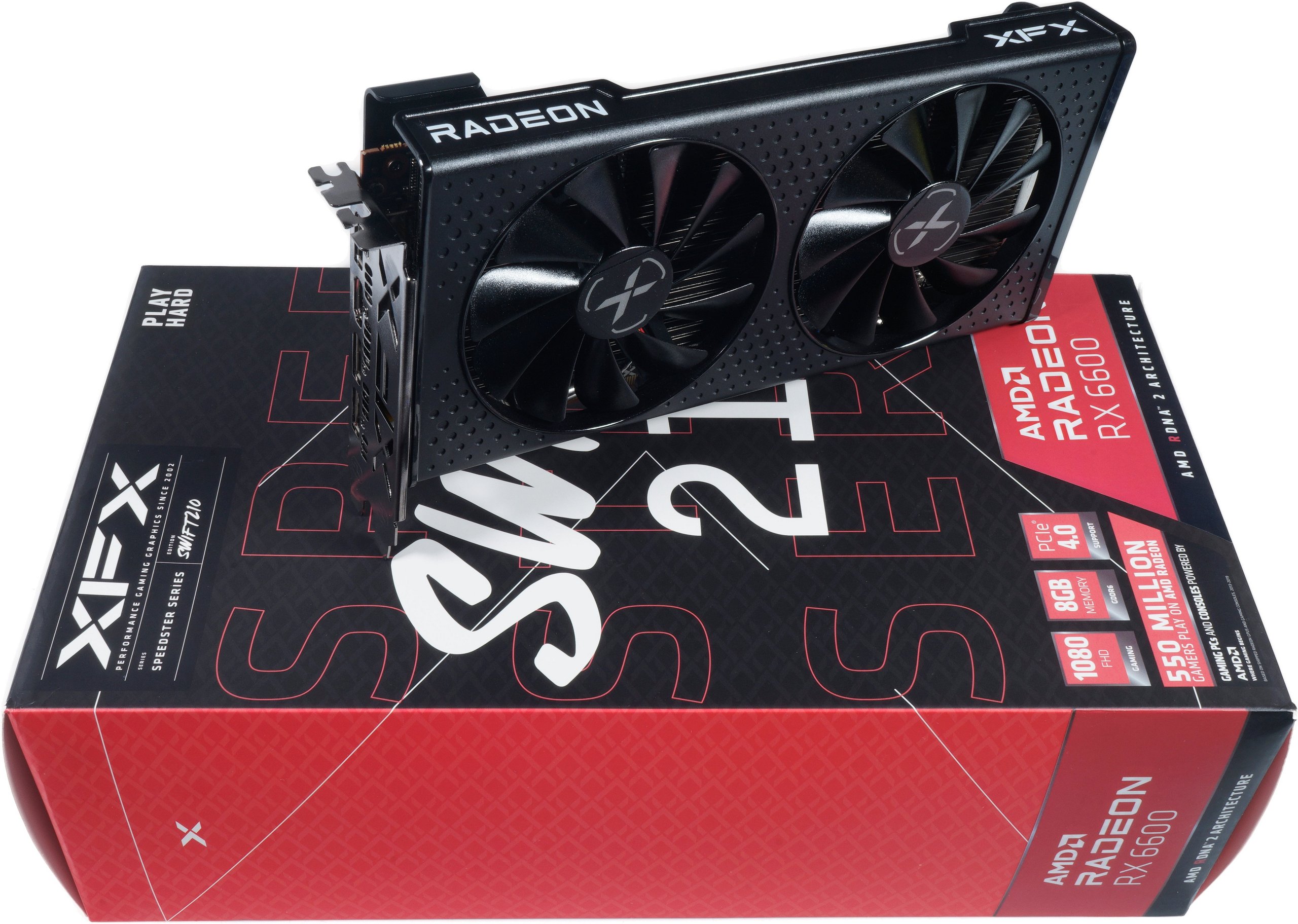 While AMD’s portfolio of graphics cards is already relatively complete at the top and mid-range, with different models ranging from the Radeon RX 6600 XT to the overpowered RX 6900 XT via the RX 6800 (XT) and 6700 XT , it still lacked a small card cut exclusively for the game in Full HD. This is precisely the market targeted by the all-new Radeon RX 6600 that the manufacturer has just unveiled.

Based on the same RDNA2 architecture as the models mentioned above, the Radeon RX 6600 is more affordable than its big sisters, with a recommended public price (no joking) of 339 euros, while still providing enough raw power to adequately run any current game at 1080p. What effectively compete with the GeForce RTX 3060 placed in the same market segment?

This test, based on a Radeon RX 6600 “Speedster SWFT 210” from XFX, was carried out in partnership with Igor’s Lab. The measurements and benchmark results may therefore vary slightly depending on the brand and the exact model of Radeon RX 6600. It should be noted in passing that no reference model is directly marketed by AMD, the manufacturer relying entirely on its partners (ASRock, ASUS, Gigabyte, MSI, PowerColor, SAPPHIRE, XFX or Yeston) to manufacture this Radeon RX 6600.

The Radeon RX 6600 is based on theRDNA2 architecture appeared last year with the Radeon RX 6800, RX 6800 XT and RX 6900 XT, and that we also find within the APU embedded in the Xbox Series S / X and PS5. This graphics card therefore benefits from the same technologies as its big sisters, in particular theInfinity Cache directly integrated into the GPU (the quantity is here limited to 32 MB, as in the RX 6600 XT), the support of DirectX 12 Ultimate and you Variable Rate Shading, l’hardware ray-tracing acceleration or the Smart Access Memory (the small name given by AMD to the Resize BAR).

The Navi 23 XL chipset used by this RX 6600 is a “light” version of the Navi 23 XT found on the RX 6600 XT: the number of Compute Units and Shaders thus increases respectively from 32 to 28 and from 2048 to 1792. The fineness of engraving (7 nm), the size of the die (237 mm²) and the number of transistors (11.06 billion) does not change, we therefore suspect that this Navi 23 XL is actually a Navi 23 XT with certain parts deactivated. The practice is common and allows partially defective chips to be recycled.

Note also that the operating frequencies of the GPU, but also of the 6 GB of GDDR6 memory, are revised downwards. In return, the TDP of the RX 6600 is only 140 watts, 20 watts less than that of the RX 6600 XT. However, the test model XFX has an 8-pin PCIe power connector where a 6-pin would have. theoretically enough. This choice is however to the advantage of the user since it improves the stability of the card and offers greater leeway in overclocking.

The XFX model therefore uses the reference characteristics. Devoid of any RGB lighting, the manufacturer’s card is relatively compact and light (640 grams), with dimensions of 180 x 125 mm and a dual-slot format. The radiator is topped by two 95mm fans, and a backplate metal is present at the rear to improve, among other things, heat dissipation.

However, the test unit suffered from a failure when unpacking: when first powered up, the fan management system simply burned out! Our colleague was therefore obliged to mount on this Radeon RX 6600 a cooling system from an MSI card; we will therefore not measure the noise pollution and the temperatures of the card since the results will necessarily be distorted by the absence of the original cooler. The other tests (performance in game and consumption), however, remain perfectly usable to compare this graphics card to other models from AMD or its competitor NVIDIA.

XFX’s Radeon RX 6600 was pitted against a few current and previous models from AMD and NVIDIA. SAM (or rBAR, equivalent technology from NVIDIA) has been activated with compatible cards. The test panel finally consists of seven recent games, four using the DirectX 12 API (Borderlands 3, Horizon Zero Dawn, Shadow of the Tomb Raider, Watch Dogs Legion) and three the Vulkan API (Ghost Recon Breakpoint, Wolfenstein Youngblood , World War Z). The tests were carried out in Full HD, with the graphics settings pushed to the maximum.

AMD indicates that the Radeon RX 6600 is intended for Full HD gaming, and we can say that the manufacturer keeps its promise: the framerate average exceeds in all the games of our panel the bar of 60 FPS, and it averages 117.5 FPS, almost as much as a GeForce RTX 3060. We are just below an RX 5700XT of the previous generation, but the difference in terms of technical characteristics with an RX 6600 XT is clearly visible: the reduced operating frequencies and the smaller number of computing units translate into a 13% drop in performance on average. In absolute, the Radeon RX 6600 is still largely sufficient to be able to play in a pleasant way in Full HD with all the graphic details pushed to the maximum … At least as long as we do not enter the ray-tracing in the equation.

Based on AMD’s RDNA2 architecture, the RX 6600 indeed supports hardware acceleration of ray-tracing. But it only has 28 RT Cores : we therefore wanted to know if these characteristics are sufficient to obtain a pleasant gaming experience in this type of 3D rendering. Metro Exodus Enhanced Edition precisely offers a “hybrid” rendering, mixing classic rasterization and ray-tracing.

With a framerate average under 60 frames per second and a minimum frame rate per second dropping to less than 33 FPS, the Radeon RX 6600 is clearly in trouble in this case. In other words, this graphics card is unable to fight against an RTX 3060 when ray-tracing is activated. This is not really a surprise, the RDNA2 architecture being the first at AMD to support this technology, and we already know that it offers ray-tracing performance down by around twenty percent compared to Ampere cards. from NVIDIA. Even if it supports ray-tracing at the hardware level, the Radeon RX 6600 therefore does not really have the capacity to compete with the RTX 3060 on its preferred terrain.

Let us finish with a significant aspect, the consumption of this Radeon RX 6600. The measurements below represent the average consumption recorded in the games of our test panel, always in Full HD with maximum graphics settings.

The excellent energy efficiency of this generation of graphics cards is confirmed, the RDNA2 architecture being rather gifted in this area: In Full HD, the RX 6600 reaches 1.2 watts per IPS, which places it at the top of the basket, well above its direct competitor, the RTX 3060. Its energy efficiency is also without comparison with the RX 5700XT, which offers, as a reminder, barely superior performance, proof once again that theRDNA2 architecture is much more energy efficient than RDNA.

In absolute terms, the RX 6600 finally meets its 140-watt TDP to the letter during a Full HD gaming session. AMD recommends a 450W power supply, and we can only agree with this advice: a higher wattage power supply will be unnecessary, provided you go for a quality 450W power supply.