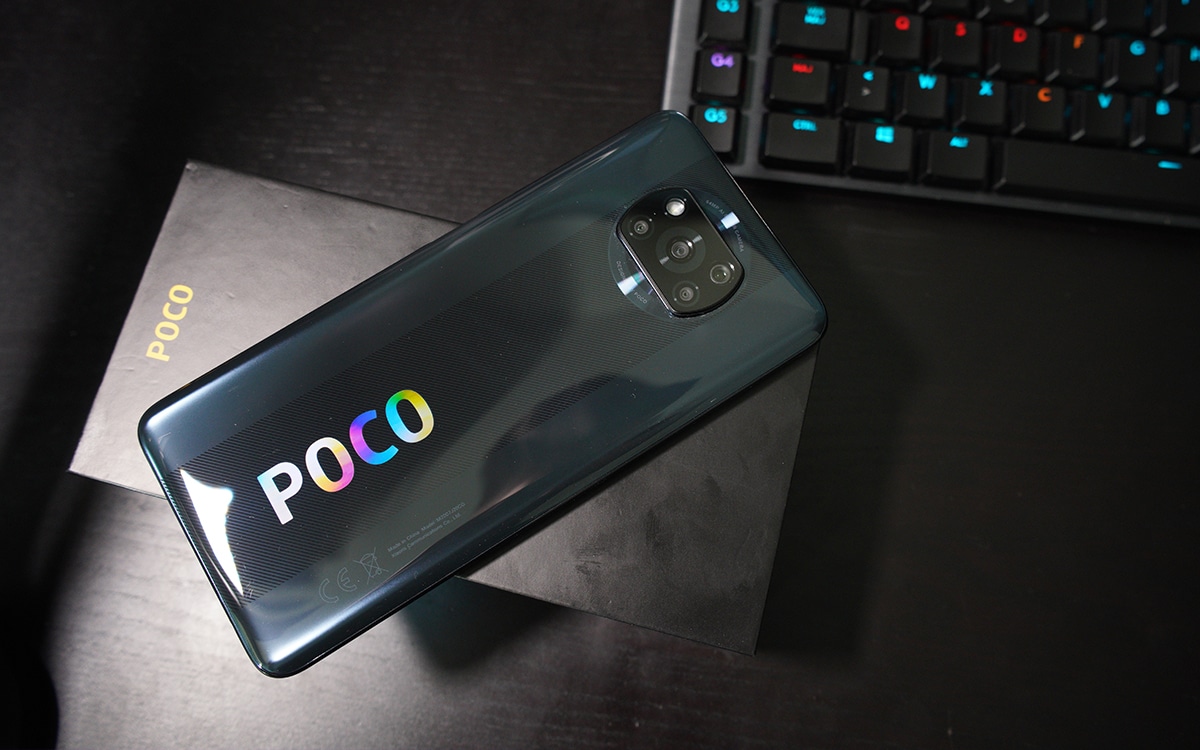 A few months after taking out his X2, Poco does it again and now offers an X3 NFC. Equipped with the all new Snapdragon 732G, a triple rear photo sensor (including the ToF module) and a 5160 mAh battery, this smartphone enjoys a super attractive price. We have tested it and offer you here all our conclusions.

Barely revealed, already tested. Xiaomi’s Poco X3 NFC is here! Poco’s new baby has already passed our test bench. And to say the least, is that the successor to the Poco X2 introduced in February (also known as the Redmi K30) has serious arguments. A minimum price, a processor that holds the road, a very correct autonomy, a screen in 120 Hz… What more could you ask for?

Our complete test of the Poco X3 NFC in video

Upon receipt of the box, the atmosphere exudes Poco. The aesthetic codes of packaging resume those of the boxes of F2 and F2 Pro. Black box, yellow writing, it’s simple and effective.
When you open, you will obviously find a small box containing the various documentation, the needle for exiting the sim card drawer as well as, as usual, a small protective shell. Let’s take the opportunity to point out that, even if the quality of this protection is not exceptional, having a solution right out of the box to avoid damaging your phone is a real pleasure, and obviously a big plus.

Just below this small box, we will find the famous Poco X3, as well as the USB-A to USB-C charging cable and an imposing power supply unit for fast charging up to 30W (we will come back to this a little later). You will understand, it will be necessary to ignore the hands-free kit, no solution being offered here by Poco. 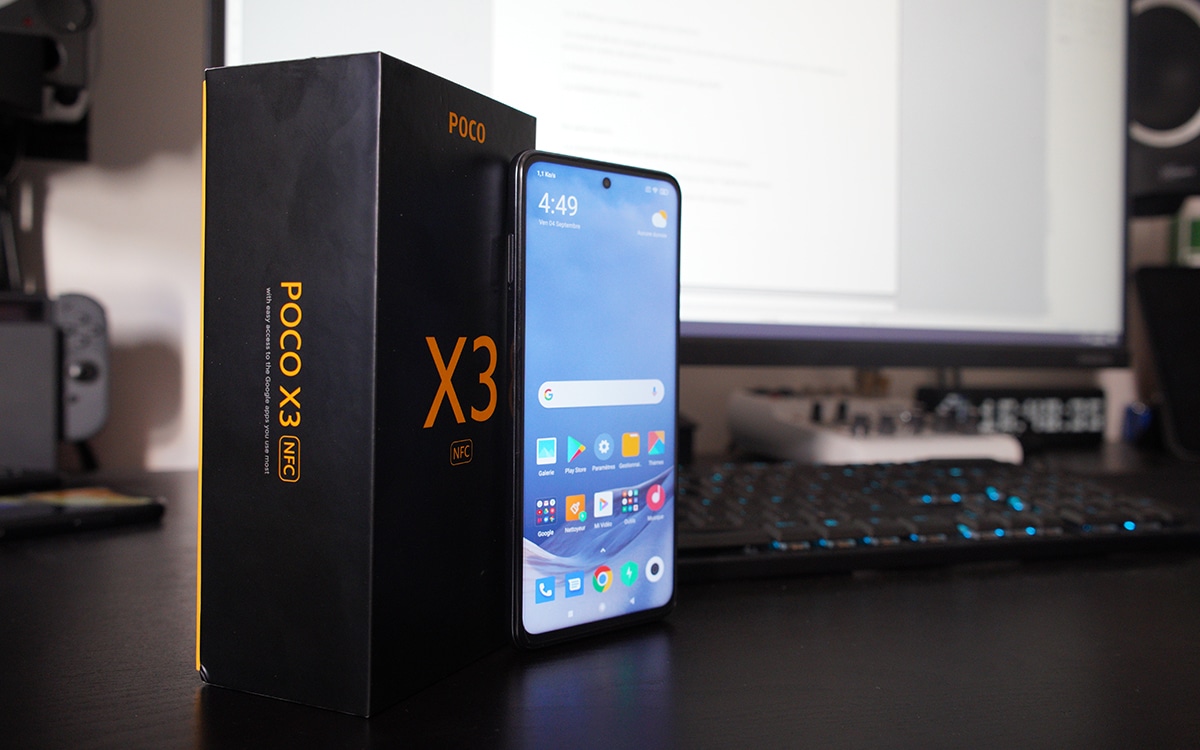 In terms of design, the Poco X3 is not really surprising: on the front, we find a large touch screen with a punch. This is located on the top and in the middle of the device, and can accommodate the selfie sensor as it should. Nothing more classic in 2020.

In the back though, the identity of Poco is affirmed. We take advantage of a well-made shiny polycarbonate back, black and with slight bluish reflections. Note that the Poco X3 is available in two colors: either blue or black (the version we tested). In the center of the device is a long strip crossing the phone from top to bottom with a striped pattern in which we find, roughly, very large, the name of the brand. Shiny plastic requires, do not expect to get rid of fingerprints, which will obviously quickly be present and very visible. 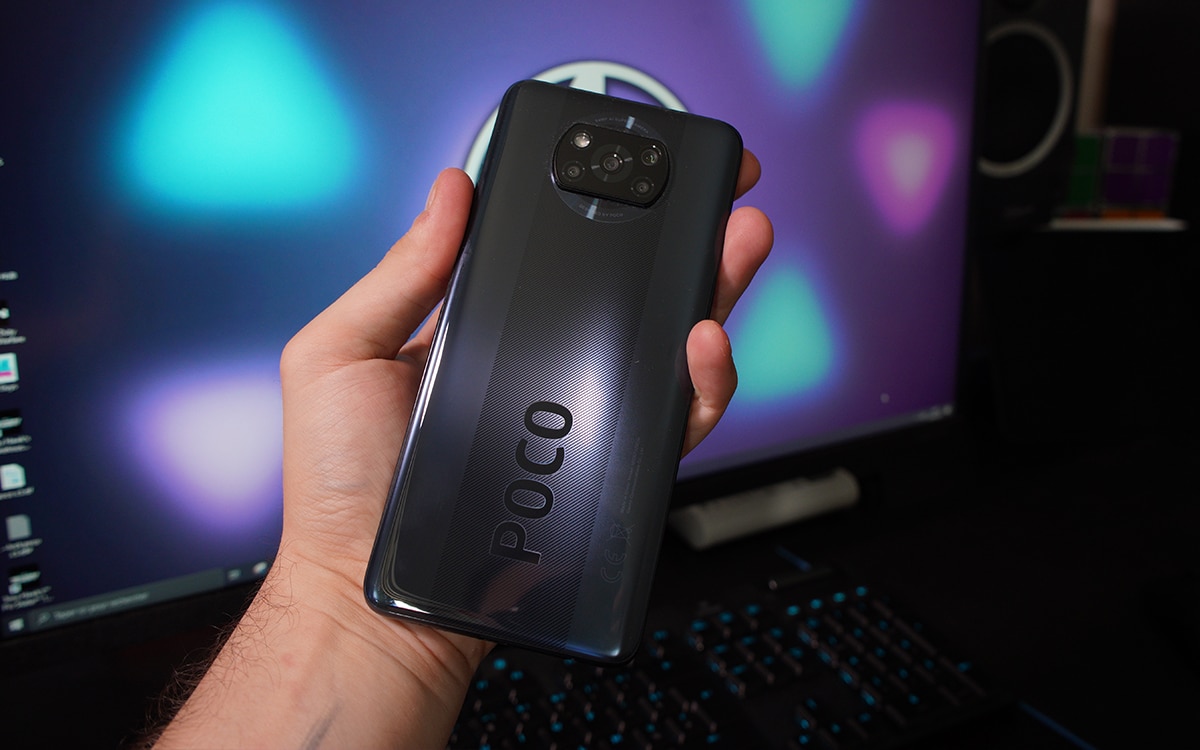 Always at the rear of the device, on the upper part of the Poco X3 and in the extension of the striped band, we find the photo module equipped with 4 sensors and a flash, which we will study in more detail in the photo part of this test.

Now let’s move on to the phone sections. All of the strapping is made of aluminum. On the upper edge, there is an infrared emitter as well as a microphone for noise reduction. On the lower edge, we find the speaker, the microphone, the USB-C socket and, surprise, the port 3.5mm jack. You can therefore easily connect your headphones or headphones with this connection. 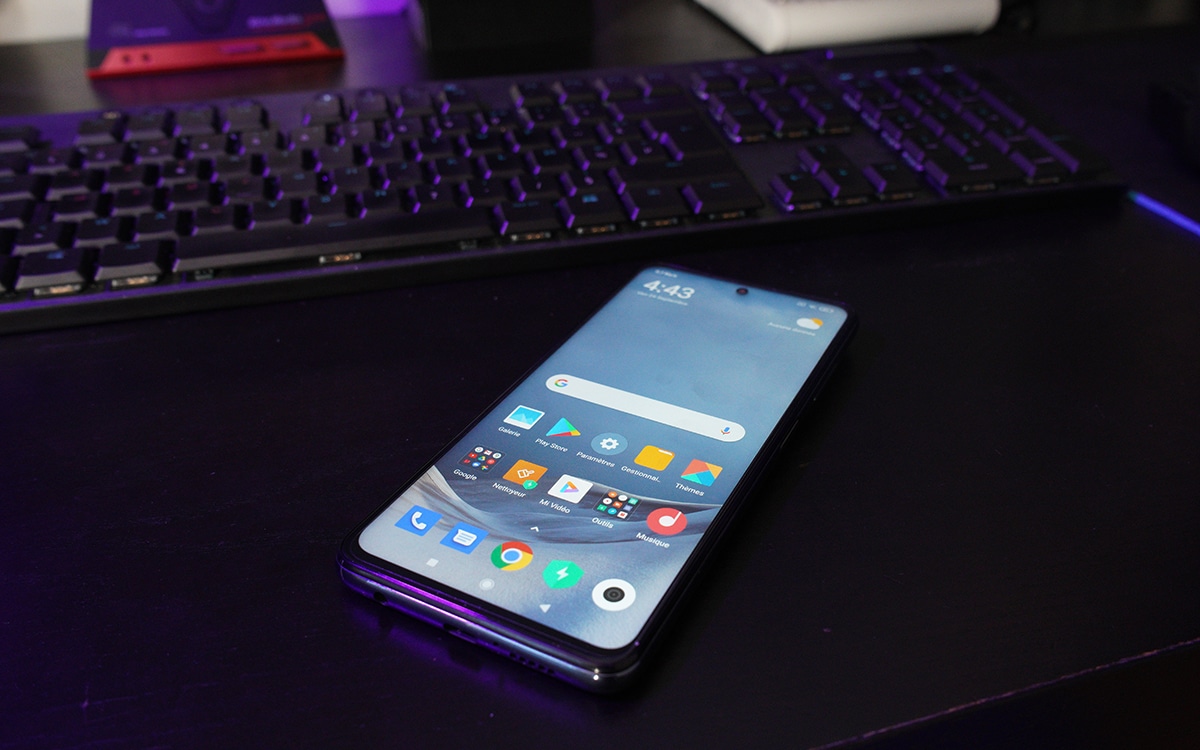 On the left side, nothing special to report, since there is only the card drawer with two locations, respectively dedicated to the nano-sim and micro-SD / nano-sim. And finally, the right edge, on which we note the presence of the two volume adjustment buttons, as well as the locking / unlocking, which incorporates a fingerprint sensor. The latter is also very responsive, touching it is enough to unlock the smartphone.

The handling of the Poco X3 is “relatively” pleasant. Relatively, since you will need big hands to be able to use it quietly. With dimensions of 16.5 cm high and 7.6 cm wide, he is a beautiful baby. However, it is a little lighter than the F2 and F2 Pro with its 215 grams, against 219 for his older brothers. Beyond the size and weight, the buttons fall easily under the fingers, the thumb will naturally rest on the fingerprint sensor. On the other hand, they are clearly designed for right-handed use. 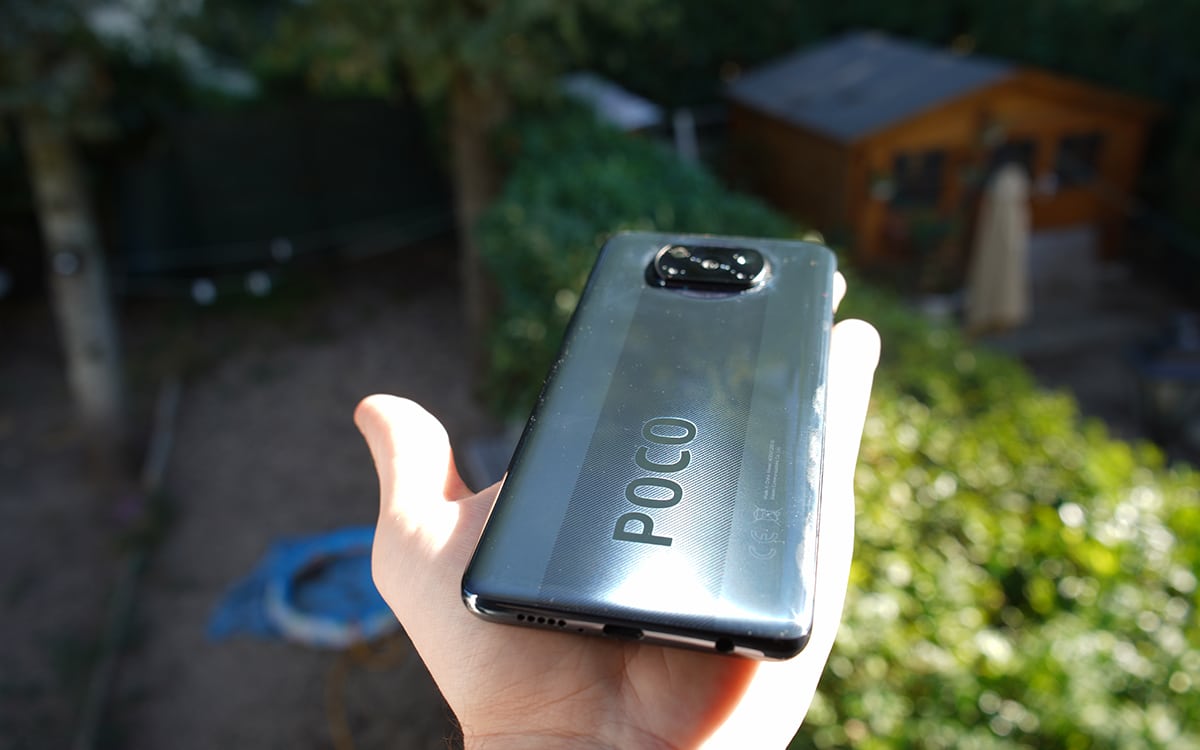 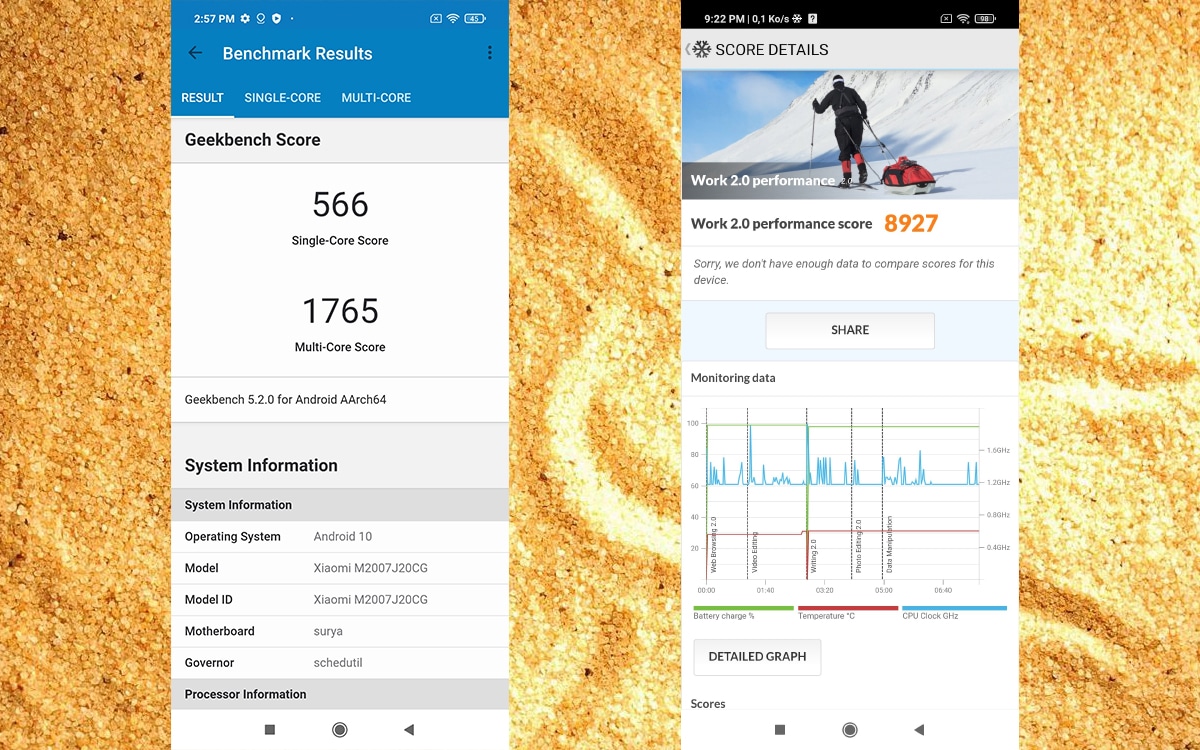 The version supplied to us has 6 GB of RAM and 128 GB of storage space. On the SoC side, a mid-range gaming model from Qualcomm was chosen, since we take advantage of the very recent octo-core Snapdragon 732G, supported by 6 GB of Lpddr4X. Gaming requires, the X3 also benefits from liquid cooling. Finally, the Poco X3 is equipped with a 5160 mAh battery supporting fast charging up to 33W, and surprise, the supplied charger fits perfectly to the technical data sheet of the device.

We tested it all on Geekbench and managed to get a score of 566 in single-core and 1765 in multi-core. To give you a point of comparison, these results are placed slightly above a Poco F1 which offered a score of 439 in Single-core and 1751 in multi-core. We then tested in situation what this configuration could give, on our game of the moment, Eve Echoes. Result: a heater present, but well mastered, no noticeable performance loss, even with a lot of information to display and the graphics at their peak. In short, a nice surprise! However, be careful with the battery, which will inevitably melt faster during long gaming sessions.

Small point on network connectivity: if you have everything here that is most modern, there is no 5G compatibility. As for the cellular network, the Poco X3 supports 2G to 4G LTE without worries, in Wi-Fi it is obviously Wi-Fi 5 that is supported, and in terms of Bluetooth, you will be entitled to low-power connectivity thanks to Bluetooth 5.1. 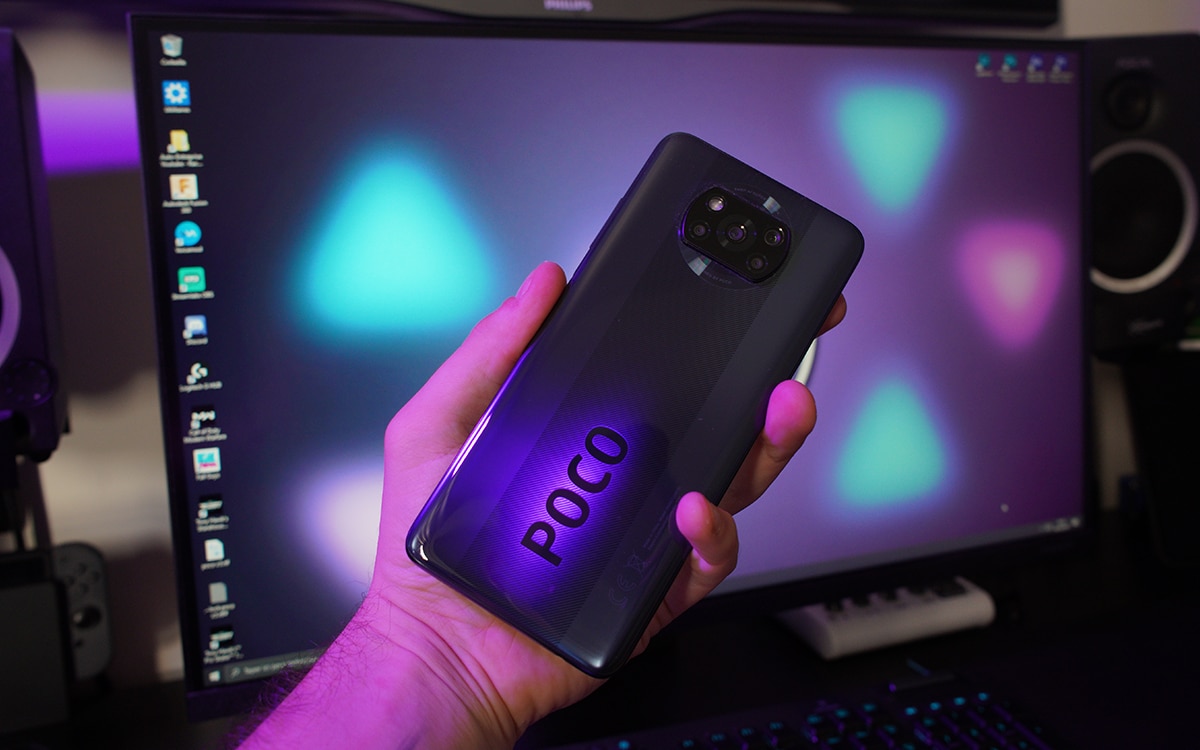 We have the right here to a 6.67 ″ LCD display in 20: 9 format offering Full HD + definition with 2400 x 1080 pixels, for a density of 395 pixels per inch. Refreshment side, it’s no less than 120 Hz which are announced by Poco and a Touch sampling rate of 240Hz (understand here that the responsiveness of this touch screen is very good). 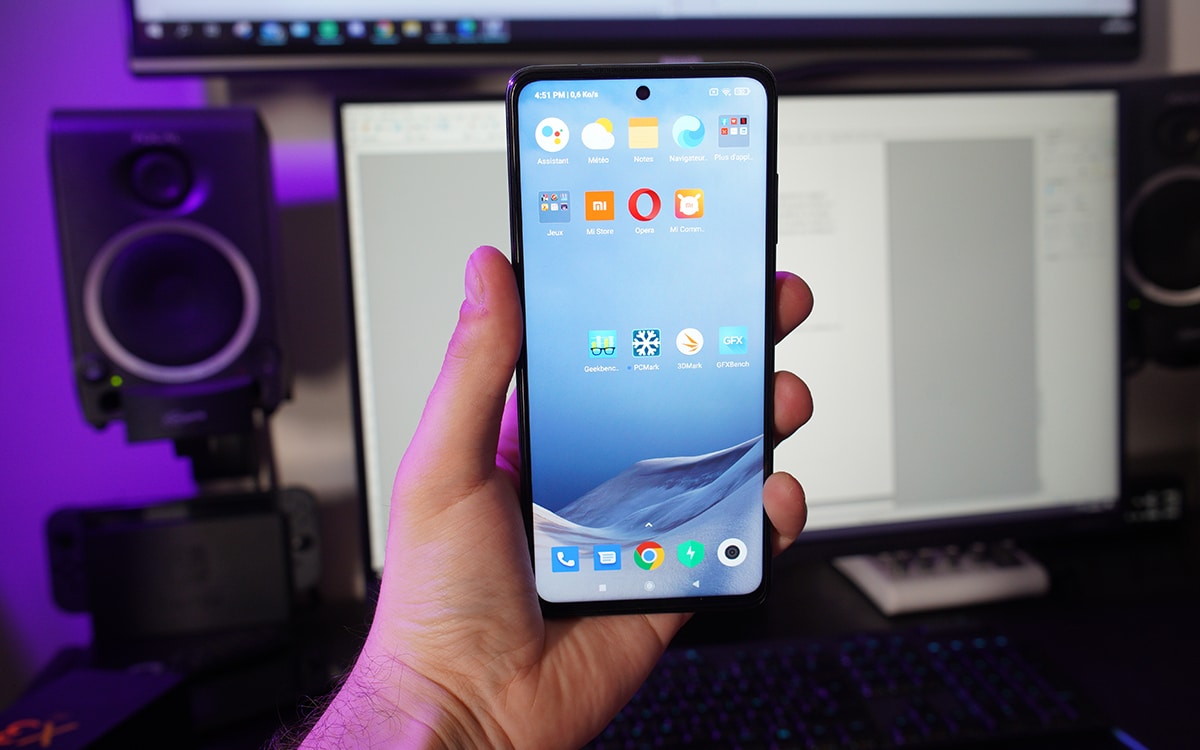 It is in terms of colors and contrasts that the shoe pinches with only 87.4% of DCI-P3 spectrum covered, a contrast ratio of 1,500: 1 and a brightness of 450nits. However, even in direct sunlight the screen remains perfectly readable. Only fingerprints on the screen will inevitably reduce the readability of the screen.

This screen is nevertheless very well made and watching videos on it is very pleasant. However, despite extensive research, we have been could not find a way to turn off 120Hz. A negative point when it comes to saving a little battery.

The Poco X3 offers stereo sound, and this is already a good point for this price range, where stereo is not always in the game. Overall the sound is good and well balanced, but lacks a bit of presence, especially in the upper mids. The bass remains a little weak. The speakers will be sufficient in all cases to listen to a little music at moderate volume, but obviously prefer a headset or a Bluetooth speaker for better quality. 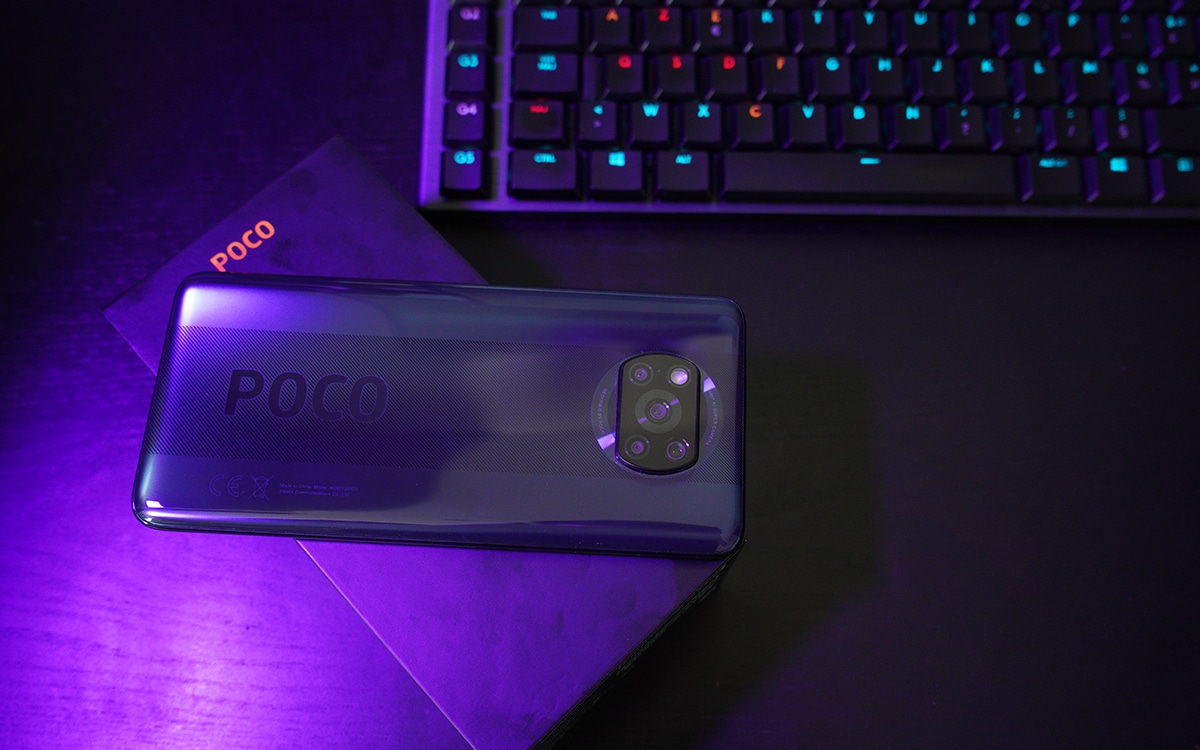 Autonomy: a day and a half

The Poco X3 is equipped, as mentioned above, with a 5160mAh battery which, depending on the brand, can last two days with moderate use. In real life, it’s more like a day and a half with an hour or two of gaming, a few hours of watching videos on YouTube, an hour of calling and lots of social media. All in all, this remains a completely respectable autonomy when you take into account the constant 120Hz of the screen.

Nothing significantly disturbing at this level, therefore. Note that you will need approximately one hour of recharging to fully charge the battery, while you can reach 60% in just half an hour. So remember to charge the Poco X3 a little before starting your day if you plan on intensive use. 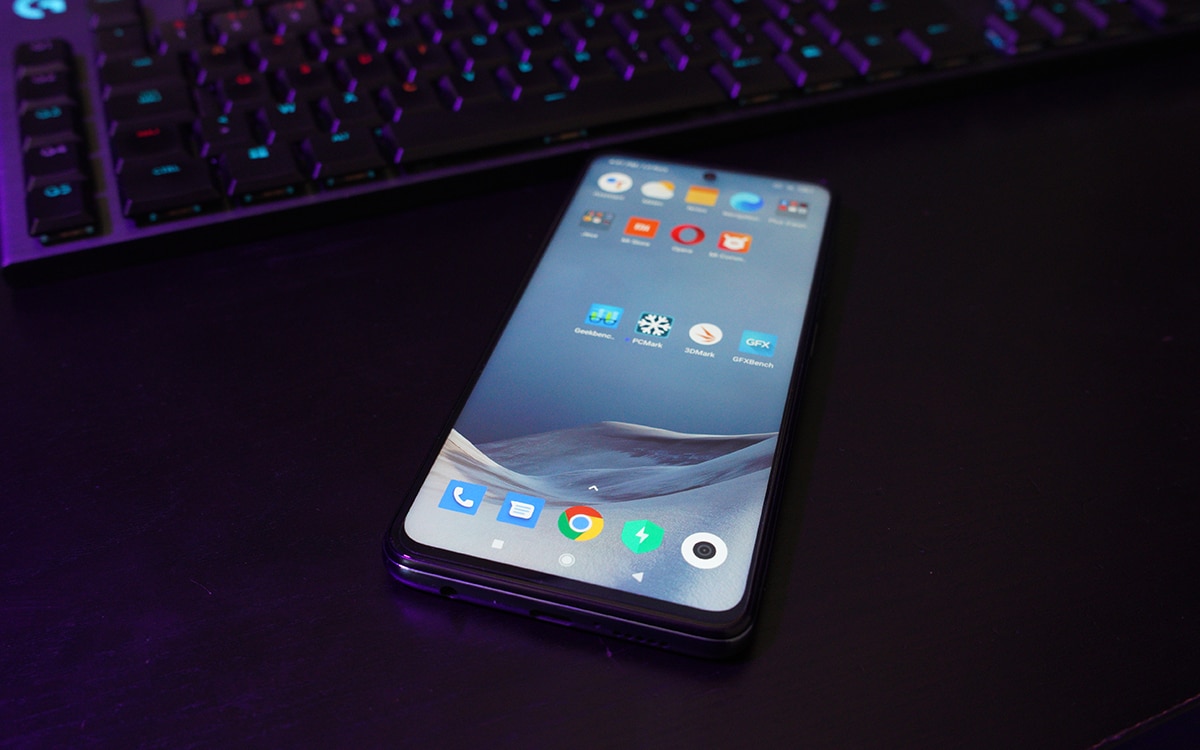 The Poco X3 obviously runs under MIUI, which is still very pleasant to use and present here in its latest version 12.0.0.8. The changes made on this latest edition are very pleasant. The control center is clearer, all of the animations have been revised and are much smoother than before. Note also the integration of application drawer which was not present on the previous version, or the floating window function which makes multitasking much more efficient and more intuitive to use.

A small negative point remains to be noted, however: the user tutorials are far too long and intrusive each time the menu is opened during the first use. 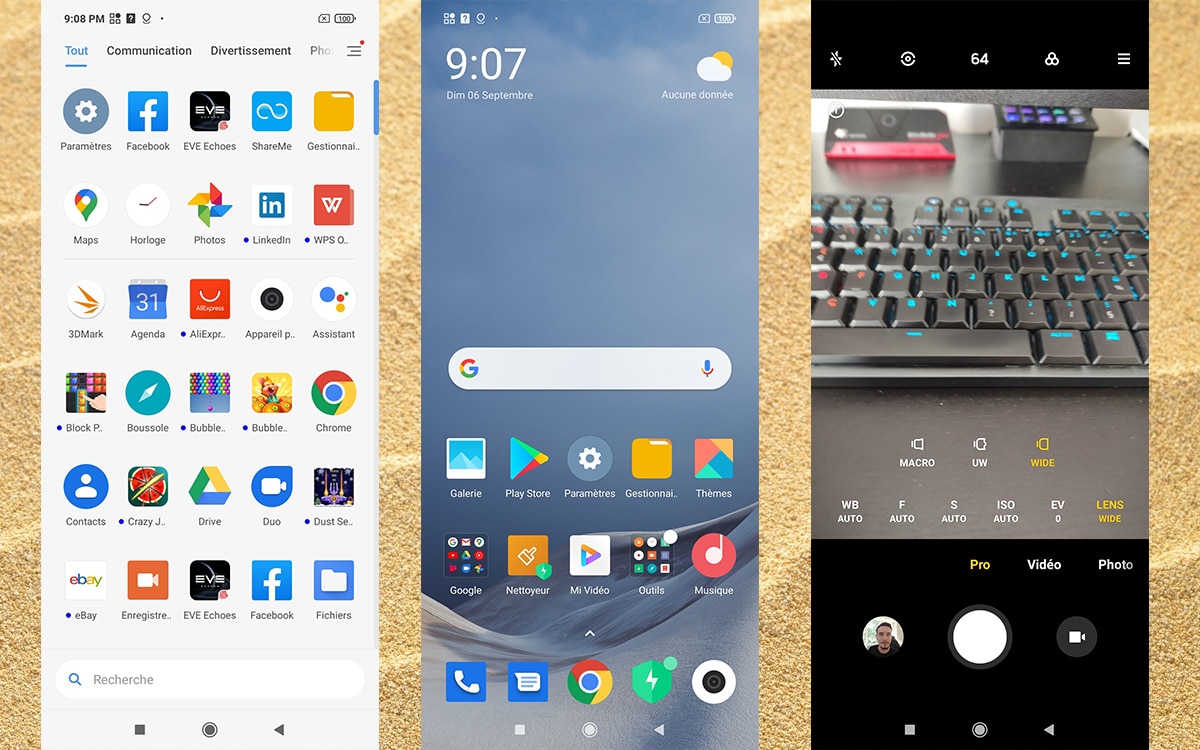 The Poco X3 is equipped with a quadruple photo module at the back broken down as follows: 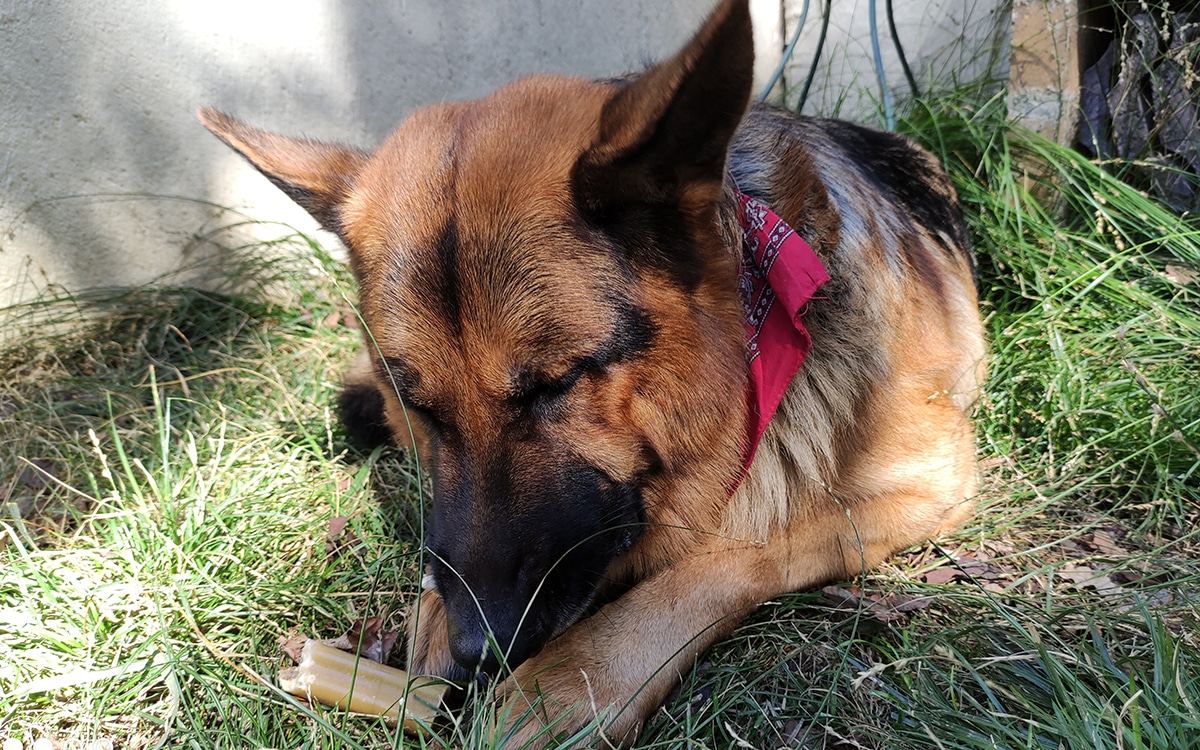 In absolute, all the sensors are doing relatively well. Colors are balanced between wide-angle and ultra-wide angle, although the latter appears slightly brighter. In broad daylight, it tends to burn the brightest areas a bit. The photos benefit from a very good level of detail and very good colorimetry. Your pictures will not be saturated, which is a very good point. 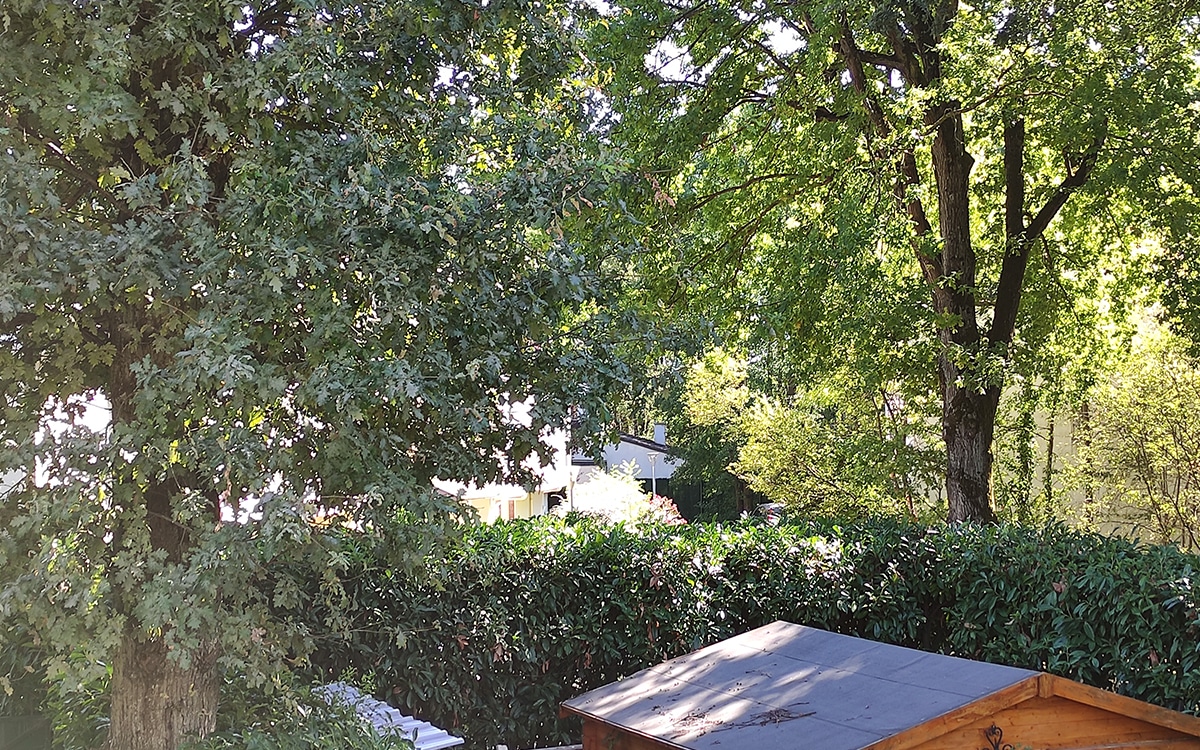 The macro sensor is nice use. The focus is fast, but sometimes imprecise, its depth of focus being very low (only 4cm). Sometimes you have to try it a few times before you get the perfect shot. Beyond that, the results are convincing. The image has sharpness, the software processing is not too present and the whole results in clean, well-defined and pleasant images. However, once transferred to a computer, the images appear less precise than on the phone screen. The fault with the magnification due to the change of screen and the sensor of only 2 Mpx. 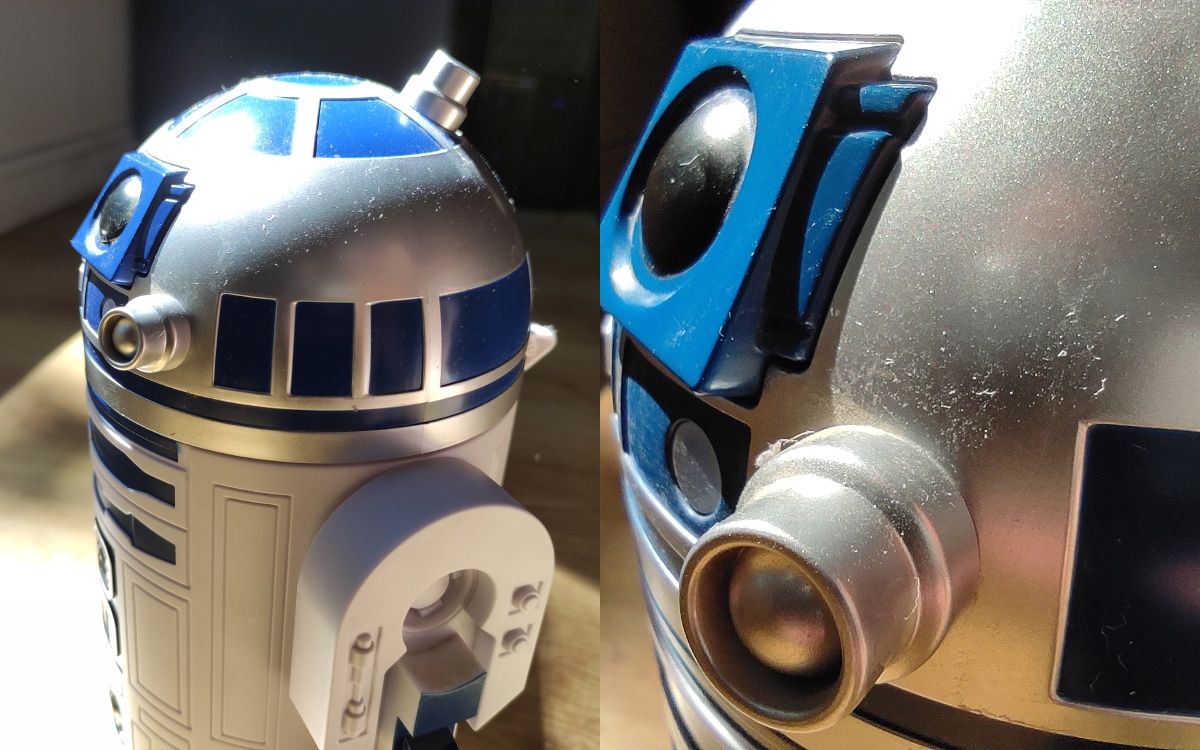 The only real negative point of this whole photo module: from certain angles in relation to the sun, and against the light, the reflections create a white veil that masks the image. This problem is especially present on ultra-wide-angle and wide-angle. Pay attention to positioning when taking pictures. Some will also regret the lack of a telephoto lens. They could console yourself with digital zoom x10. However, above x4 magnification, the image tends to pixelate, and the loss of information is greatly felt. 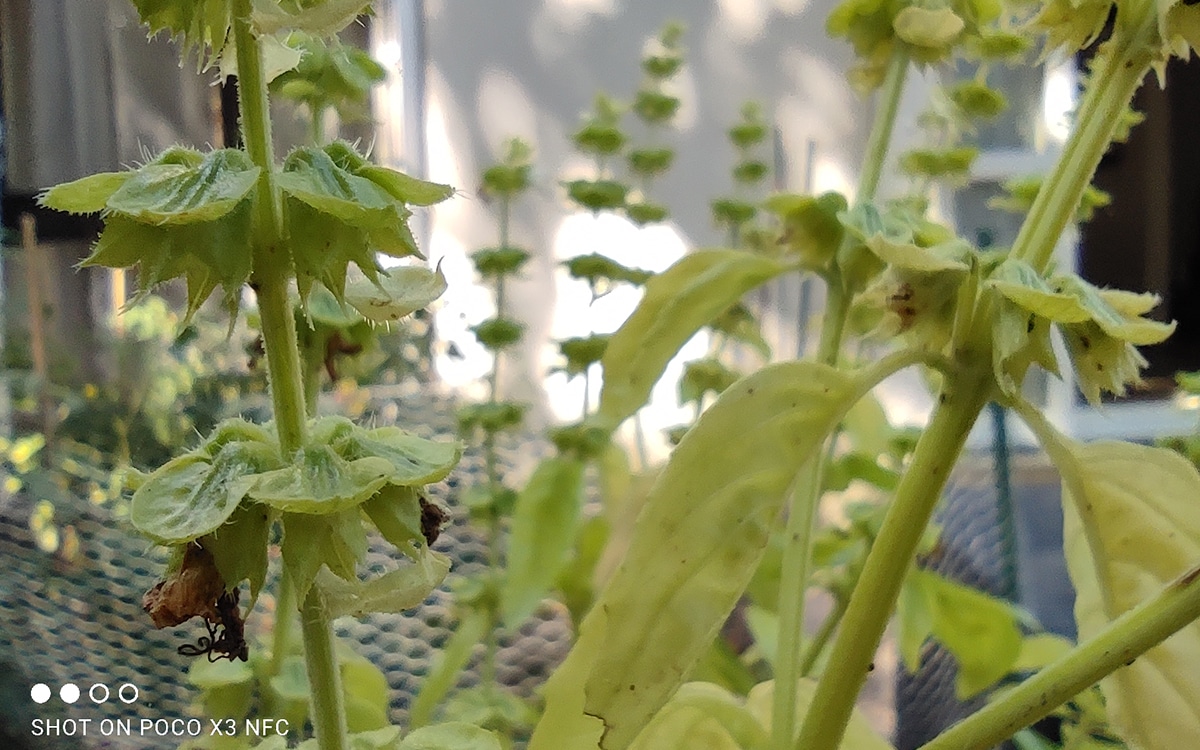 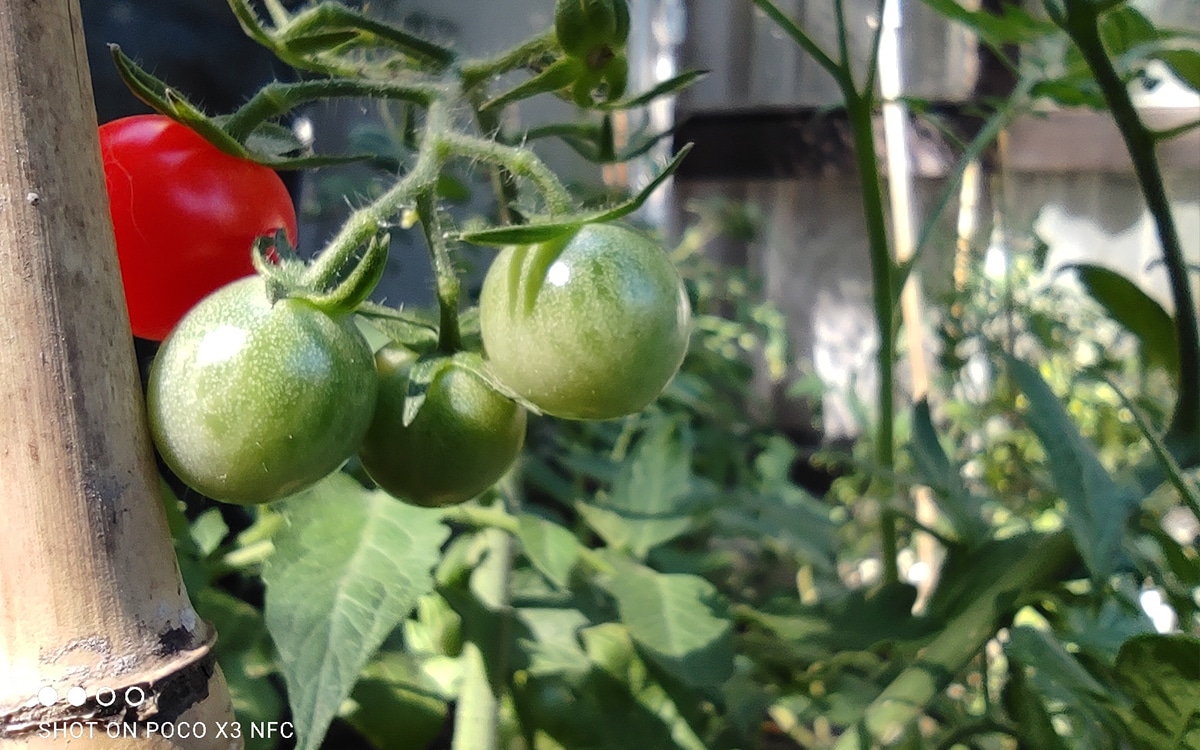 On the video side, the Poco X3 will be capable ofrecord up to 4K at 30 fps, and optical stabilization is still quite surprising, like what Poco offered on the F2 and F2 Pro. Even with voluntary jolts, stabilization holds up and makes everything extremely fluid. You could almost think of using an external gimbal. 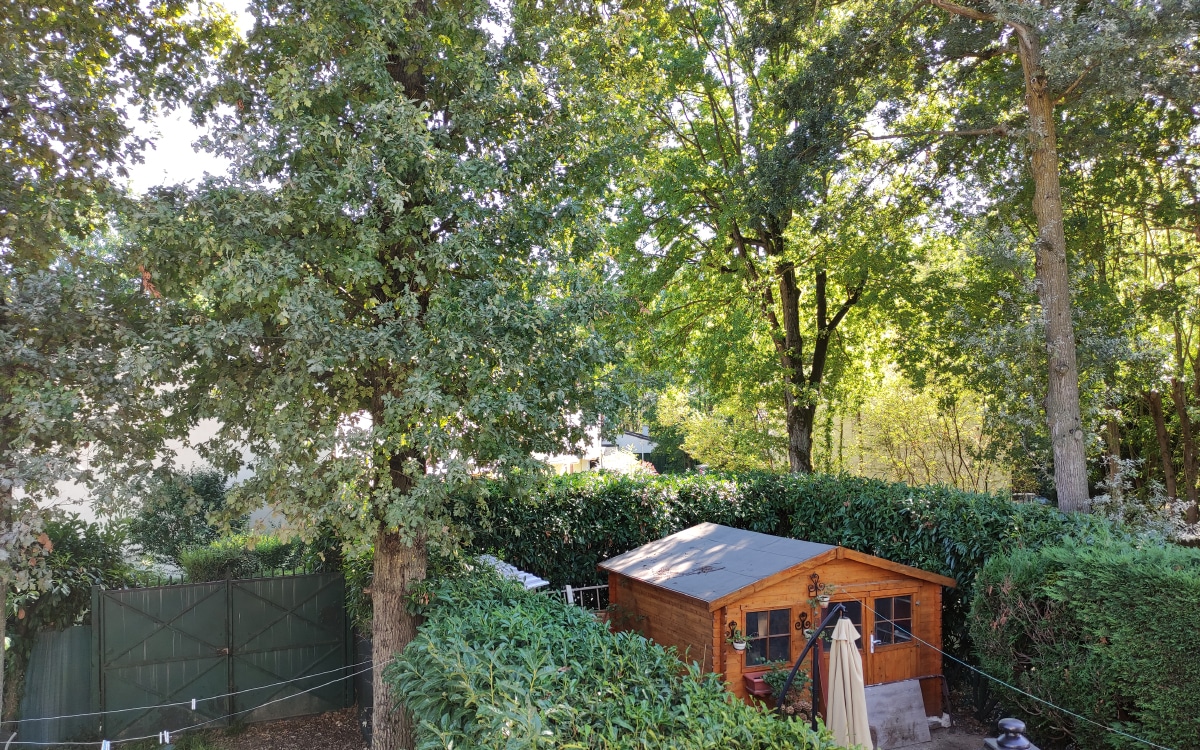 Interesting point to note, the native shooting application is very well built. However, shooting in maximum quality (64Mpx thanks to Sony’s IMX 682) is only done through the “more” menu. With regard to the macro as well, access is via roundabout means. Either by entering the options of the application in photo mode, or by selecting, from pro mode, the desired lens. Too bad there isn’t an easier way to access it. 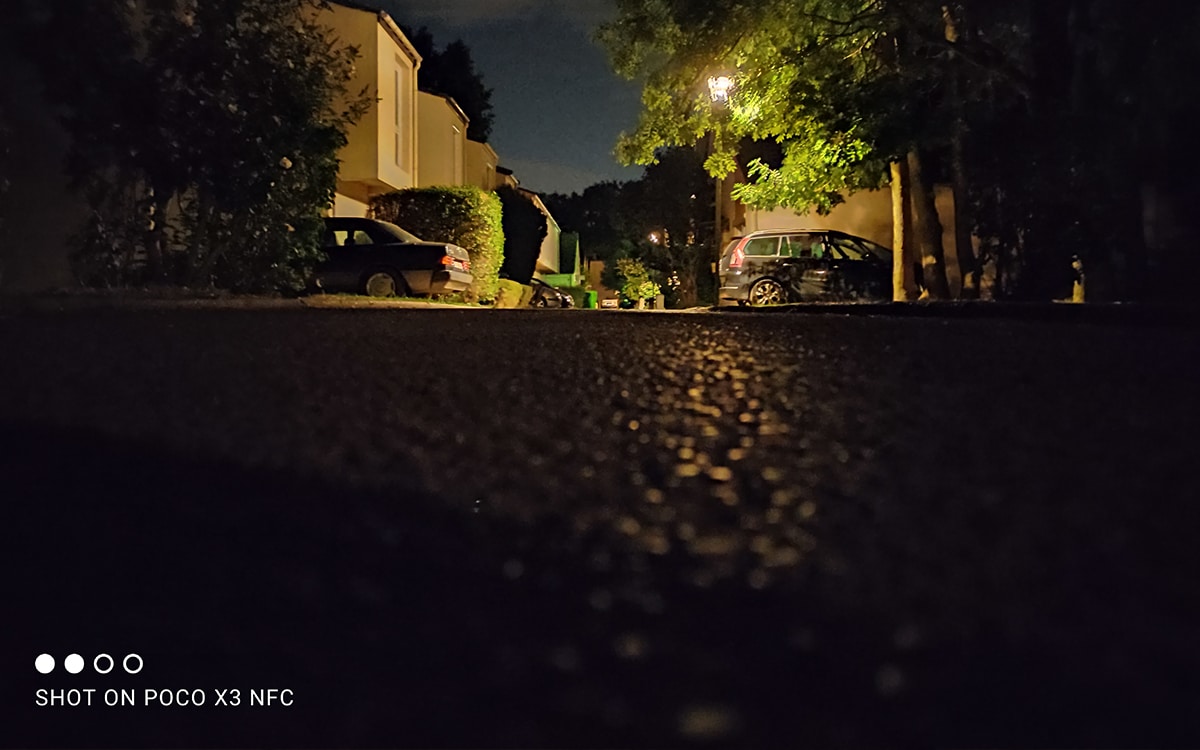 Finally, let’s quickly talk about the night photo mode. The results are generally readable, but lack detail in the darker parts of the image. However, we must forget the ultra-wide angle or the macro sensor, only the main sensor is available in this mode. 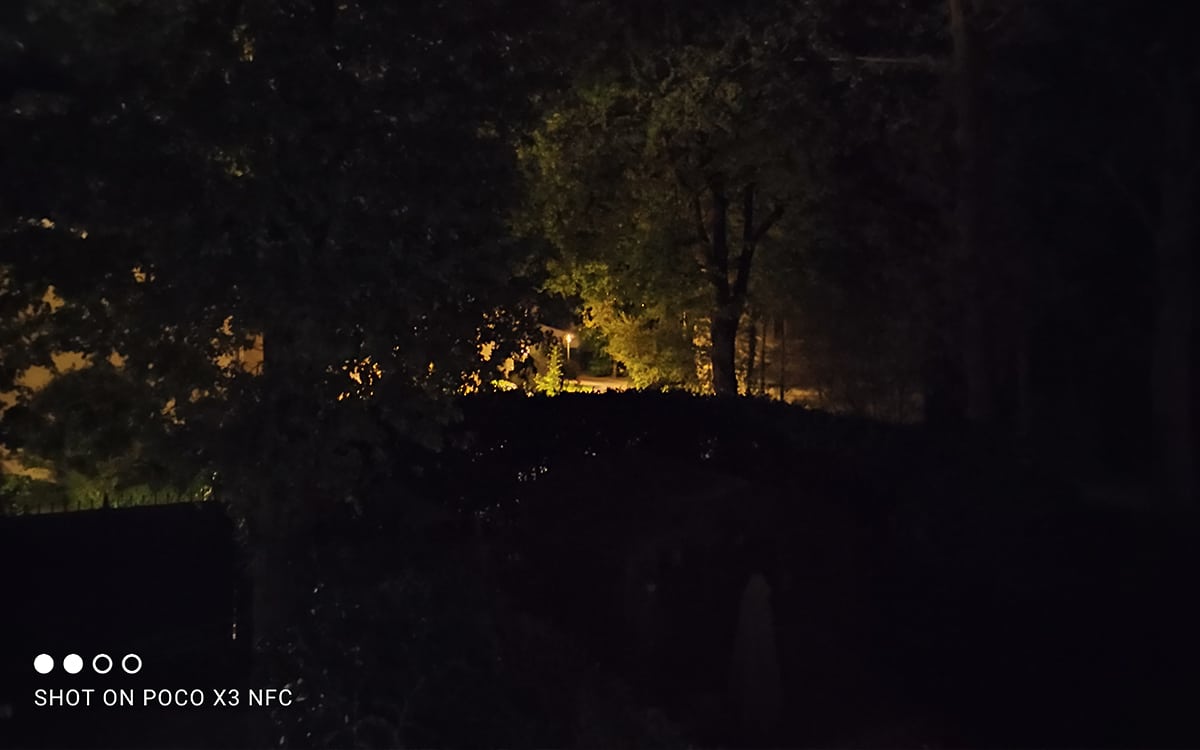 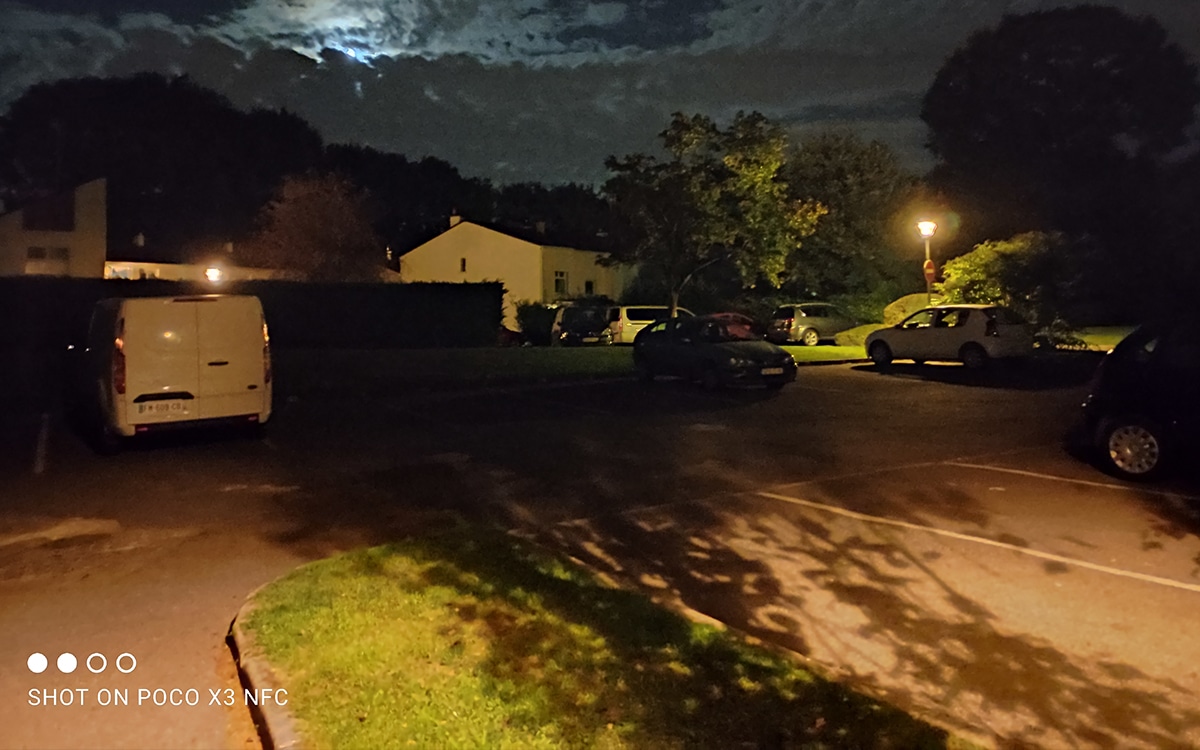 The selfie sensor integrated in the screen is 20 Mpx and has an f / 2.2 aperture. The pictures are good without being impressive. Remember to turn off the usual beauty filter, which tends to smooth the face too much, and gives it a very unnatural look. The portrait mode defends itself well, despite some clipping issues that are generally very inconspicuous. 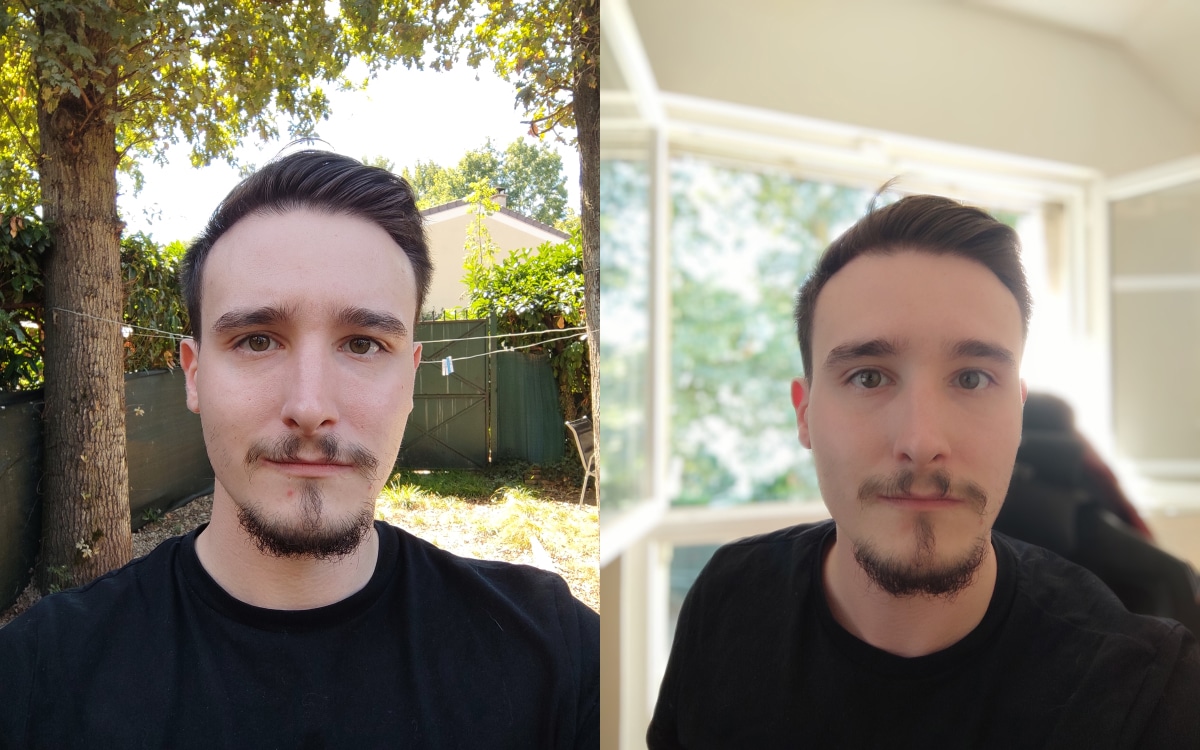