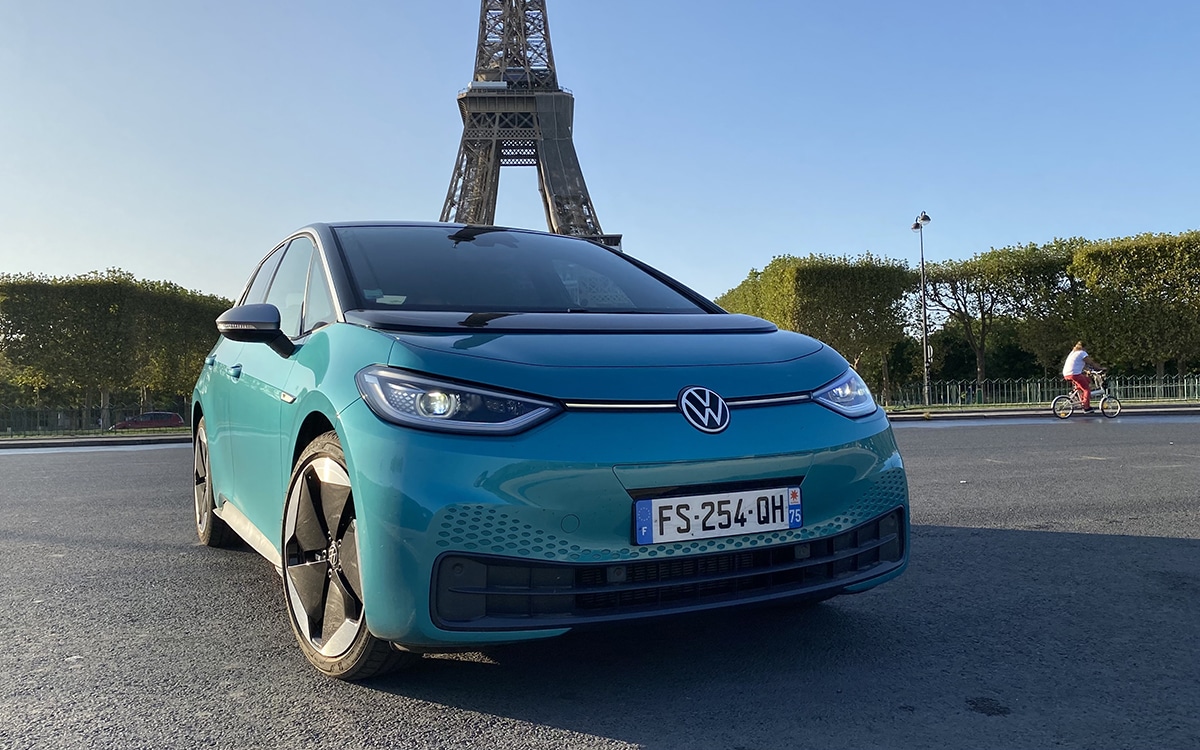 After the e-Golf and the e-Up !, Volkswagen is continuing its energy transition and offering a new electric car. More technological and theoretically more successful, we were able to try it on the occasion of a day in Île-de-France.

Test carried out by Driss Abdi

All car manufacturers must reduce their emissions to meet the standards set by the European Union and try to escape a fine that promises to be very steep: the average CO2 emissions of all cars sold must not exceed approximately 95 g / km. The electrification of the ranges is therefore essential to achieve this objective, whether it is a question of offering hybrid or 100% electric cars. It is in this context that the Volkswagen ID.3 finally arrives. 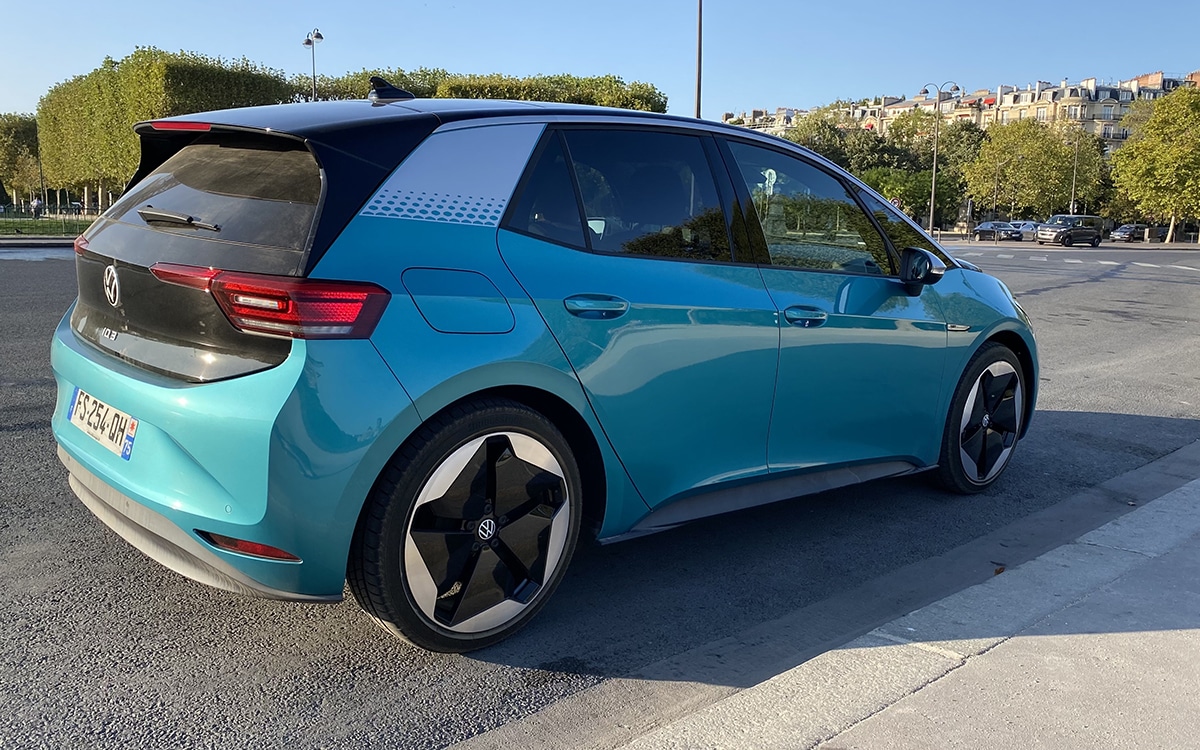 The ID.3 finally arrives on the market, more than a year and a half after its presentation

Finally ! ID.3 has finally arrived! It will have been long overdue since its announcement in early 2019, which was followed by record pre-orders: only 24 hours after its presentation, the Volkswagen ID.3 had already registered 10,000 reservations with a deposit of 1,000 euros. If we had been able to quickly take it in hand last December, we were finally able to test it more in depth. 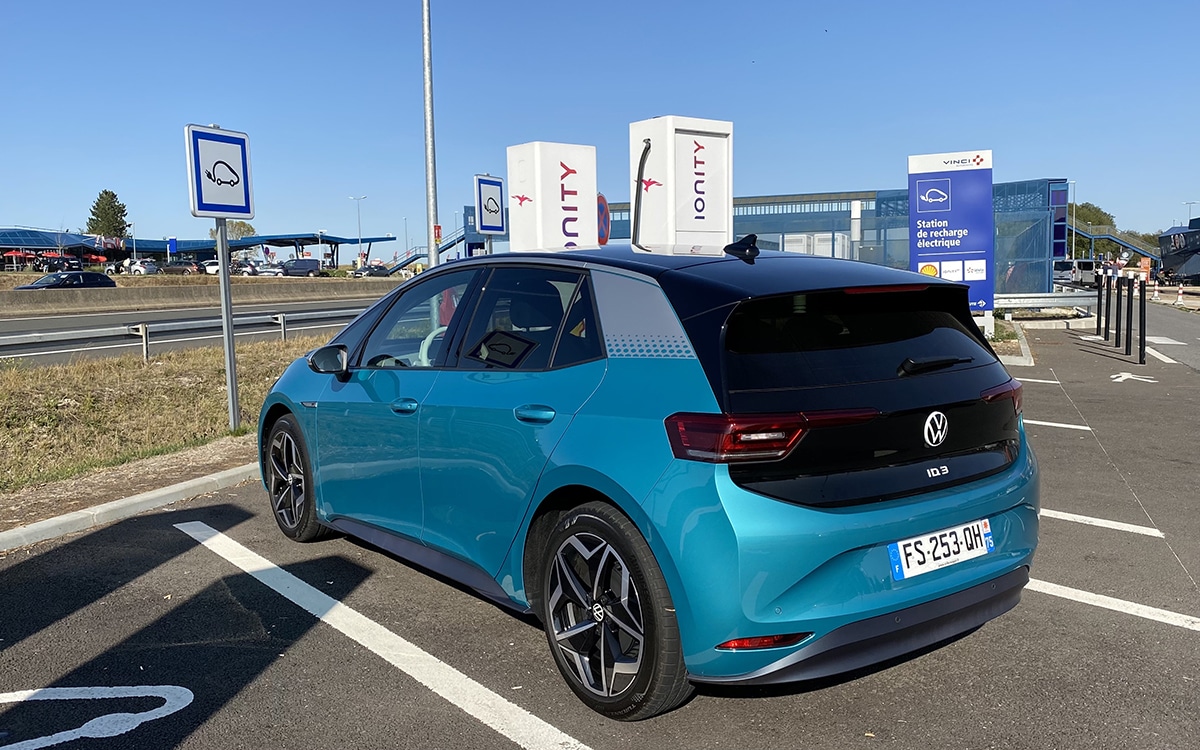 While this is not strictly speaking the first electric car from the Wolfsburg brand, it is the first to benefit from a dedicated platform. Indeed, the e-Golf, which should be released soon from the catalog, and the e-Up! are nothing other than thermal models modified to accommodate an electric motor. The MQB platform therefore had to be adapted to accommodate the batteries. The Volkswagen ID.3 therefore adopts a new architecture based on the MEB platform which will equip all the electric models of the group with its two axles between which the battery is placed. 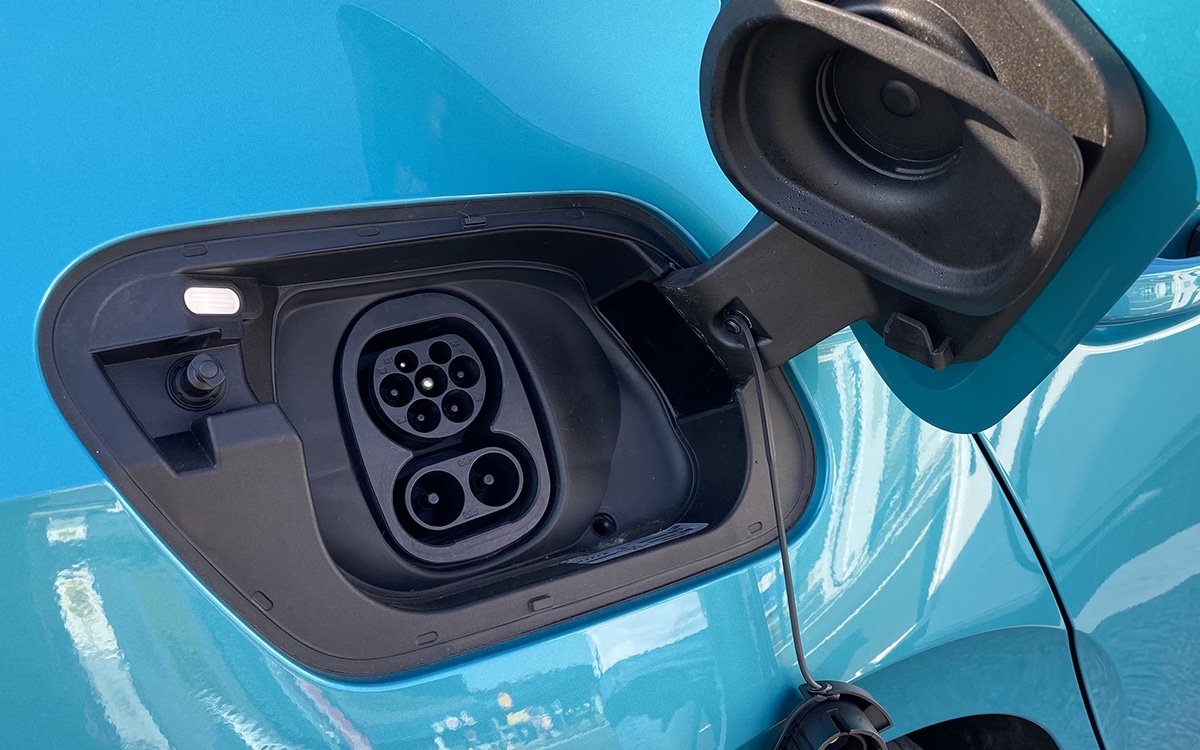 Announced successor of the e-Golf, the Volkswagen ID.3 uses the same codes that made the success of the compact. By the way, it is important to point out that the Golf thermal version remains in the catalog with the launch of the eighth generation last year. The family relationship is therefore evident with a welcome touch of modernity which is enhanced by the LED lighting of the ID.3. 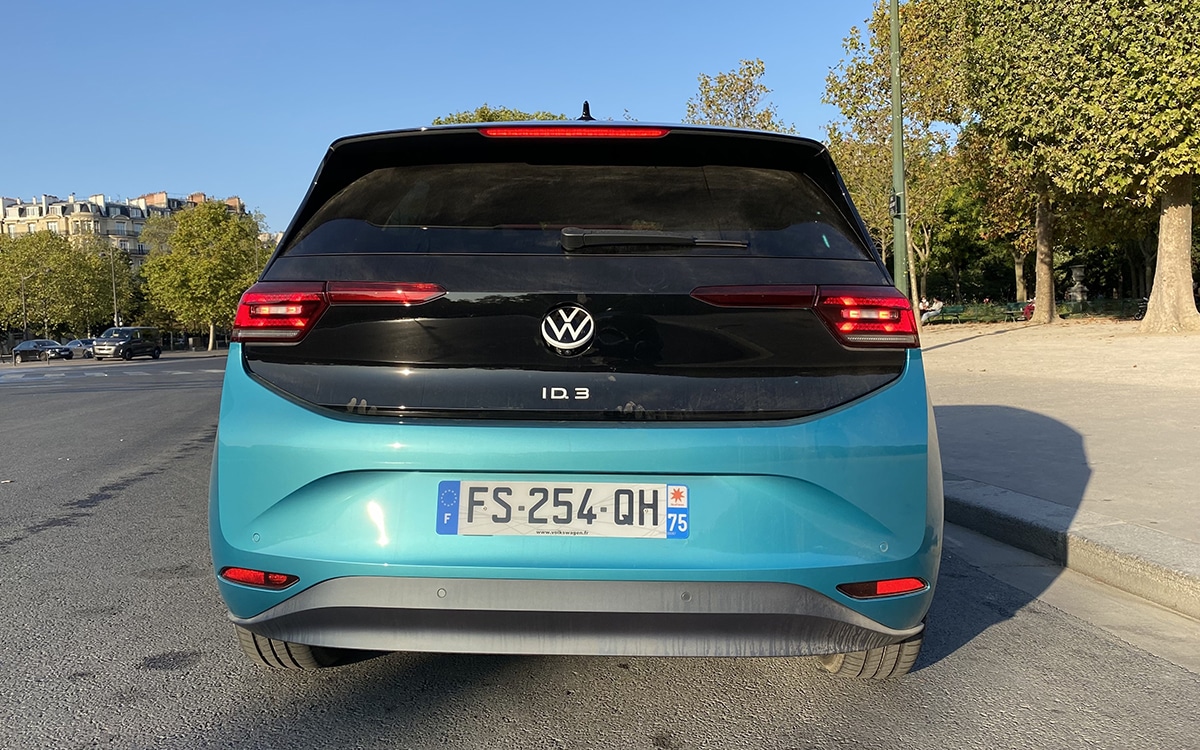 Shorter and wider than a Golf 8 (respectively – 2.3 cm and + 2 cm), the ID.3 has a smaller turning radius than the Polo and similar to the small Up!. It also benefits from a longer wheelbase of 12.9 cm which allows a more spacious interior, especially in the rear seats. Passengers have plenty of legroom with in particular the absence of a central tunnel. On the other hand, the car is quite high (+ 9.6 cm compared to the Golf 8), in order to accommodate the batteries nested in the floor, which is also quite high. Fortunately the Cx (coefficient of penetration in the air) displayed is only 0.27 and the headroom remains good, including in the rear seats for passengers under approximately 1.90 m.

Side trunk, the ID.3 is practically on par with the Golf by offering 385 liters of capacity. Access is not necessarily easy for bulky items, but a false floor is available for the top-of-the-range versions and nevertheless reduces the useful space. Note also thata double bottom is provided to accommodate the cables. 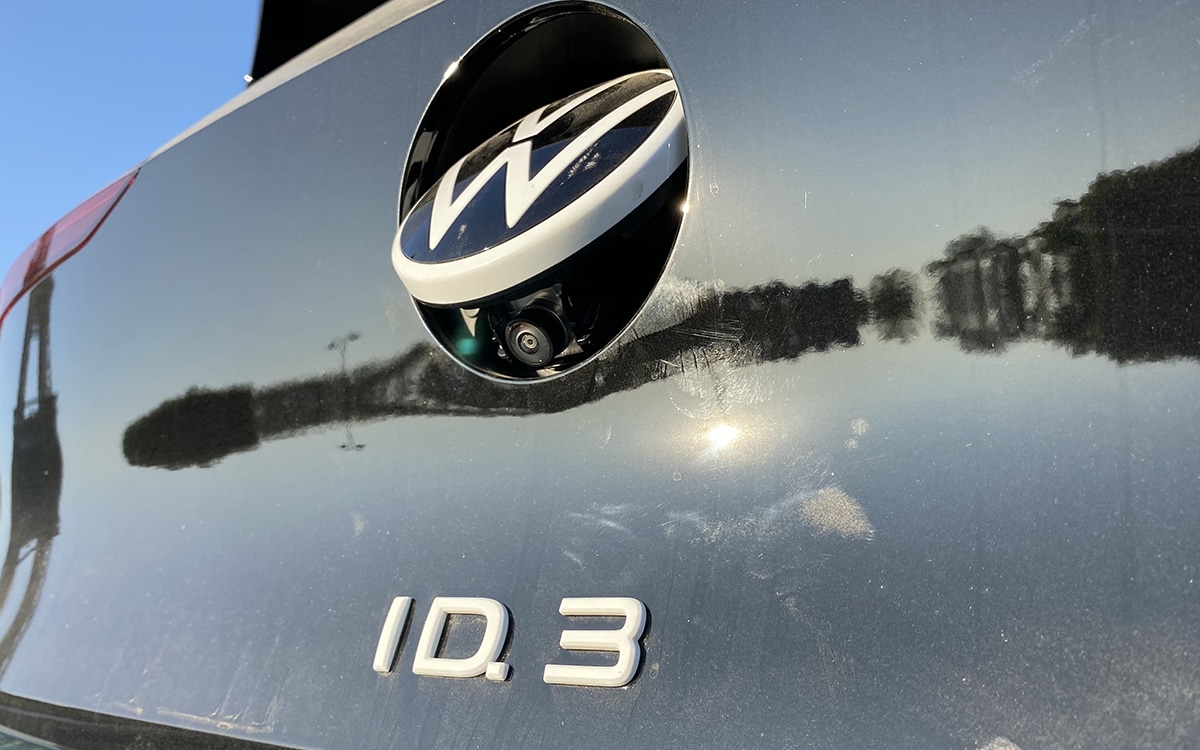 A version only for the launch of the Volkswagen ID.3

As usual, Volkswagen first offered a 1st Edition version of its ID.3 which (very) quickly found buyers. From now on, only the 58 kWh (204 hp) version is available while waiting for the other variations. Ultimately, the Volkswagen ID.3 will be offered with three capacities of 45, 58 and 77 kWh (net). Five finishes will be in the catalog: Life, Business, Family, Tech and Tour as you can see in the photo below. Note that the smaller 45 kWh version (330 km and 145 hp) will not be available until next year. 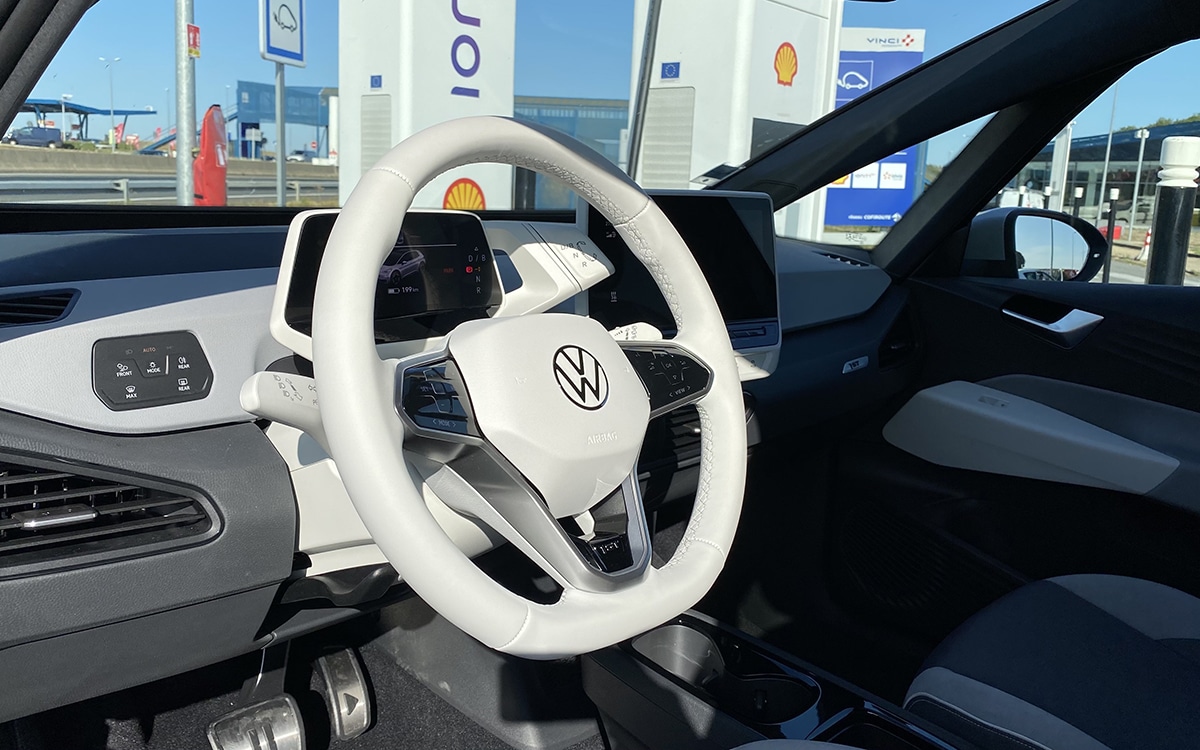 We tried a 1st Edition equipped with virtually all options, including massage seats. In addition to its 58 kWh battery, it has a 150 kW (204 hp) rear motor which develops 310 Nm of torque instantly. The advertised autonomy is 426 km and the car has an 11 kW charger. Finally, the 45 and 58 kWh models benefit from fast charging at 100 kW against 125 kW for the 77 kWh. 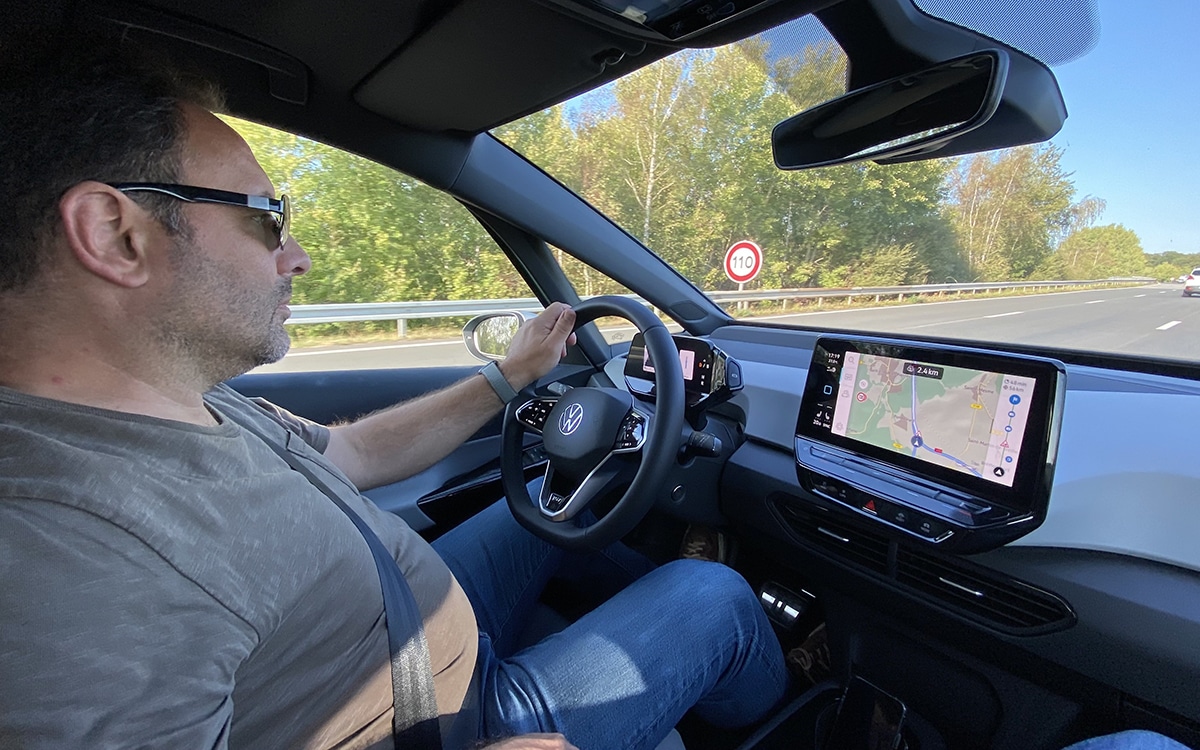 On board, the‘Promised space is indeed there and the Volkswagen ID.3 is also showing generous in terms of storage. Still, for our 1st Edition displayed at 49,990 €, the ubiquity of hard plastics surprises. However, with 1794 kg on the scale (including 376 kg of battery), every gram counts. The interior is bright and the front pillars do not obstruct too much visibility. Our version also had a large panoramic glass roof. 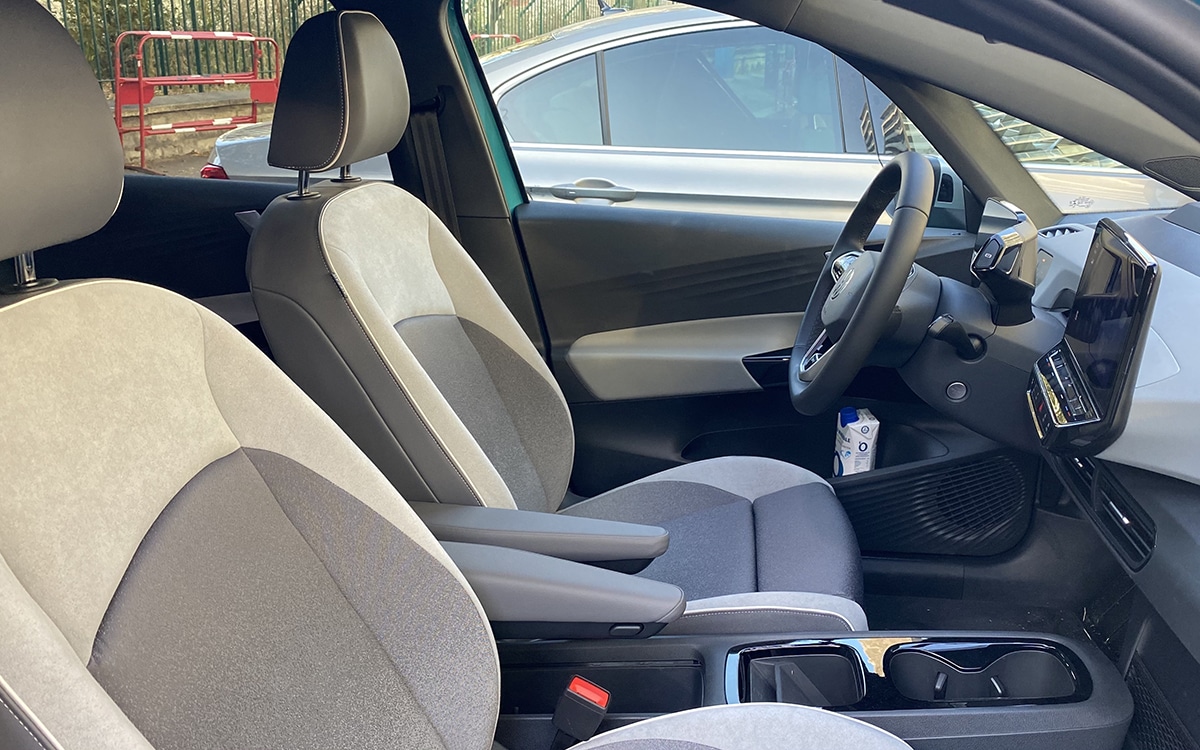 A small 5.3-inch screen sits behind the wheel. This displays essential information such as vehicle speed, current speed limit or navigation. A touch button on the steering wheel allows you to change the display with three screens like a smartphone. A HUD (head-up display) is also available which displays the same information so as not to look down while driving. This adopts a display on the same line which is very practical in use. 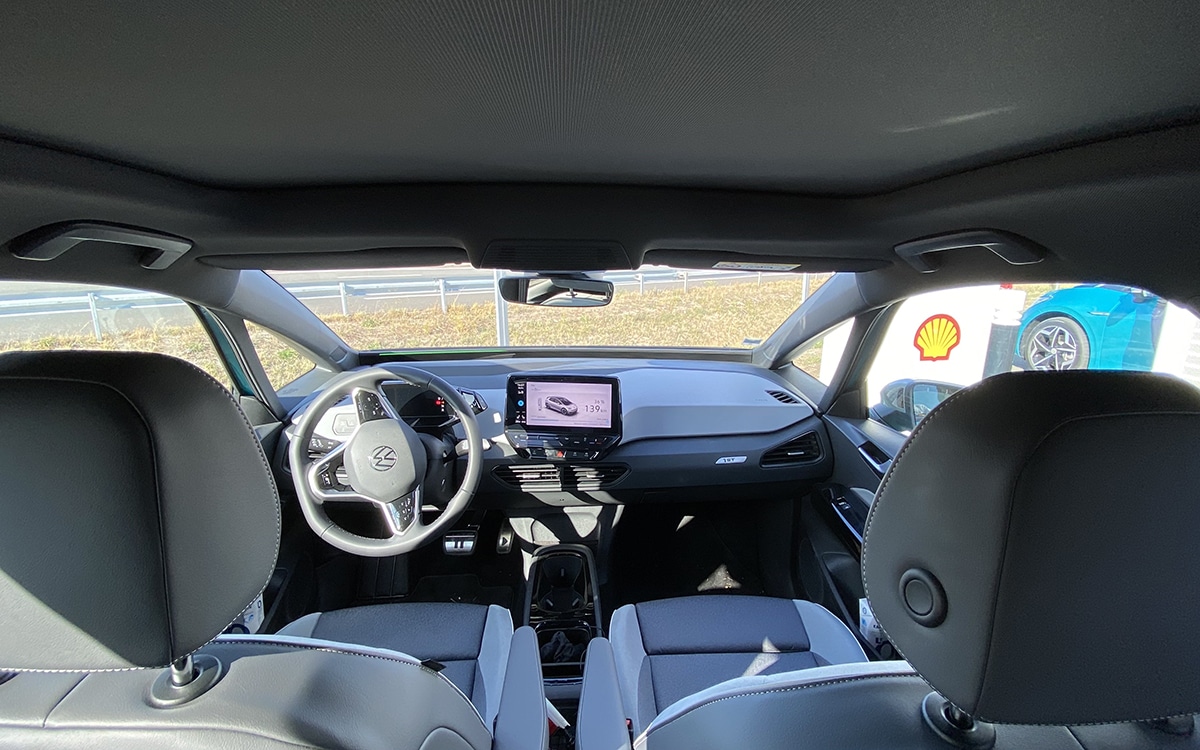 Like all new vehicles from the Volkswagen Group, the ID.3 swaps the physical buttons for tactile buttons. At first glance this can seem confusing. But overall it works pretty well once you get the hang of it. Here again, inspiration is drawn from the smartphone with a basic function which is doubled by another function via the multipoint: you can thus adjust the temperature on board by touching the dedicated button with a finger, or activate the heated seats with two fingers. Likewise, the touch-sensitive volume control buttons allow you to zoom in on the map when touched with two fingers. Where applicable, the Volkswagen ID.3 also has its own voice assistant that is invoked with the Bonjour ID command and which works quite well for basic actions. 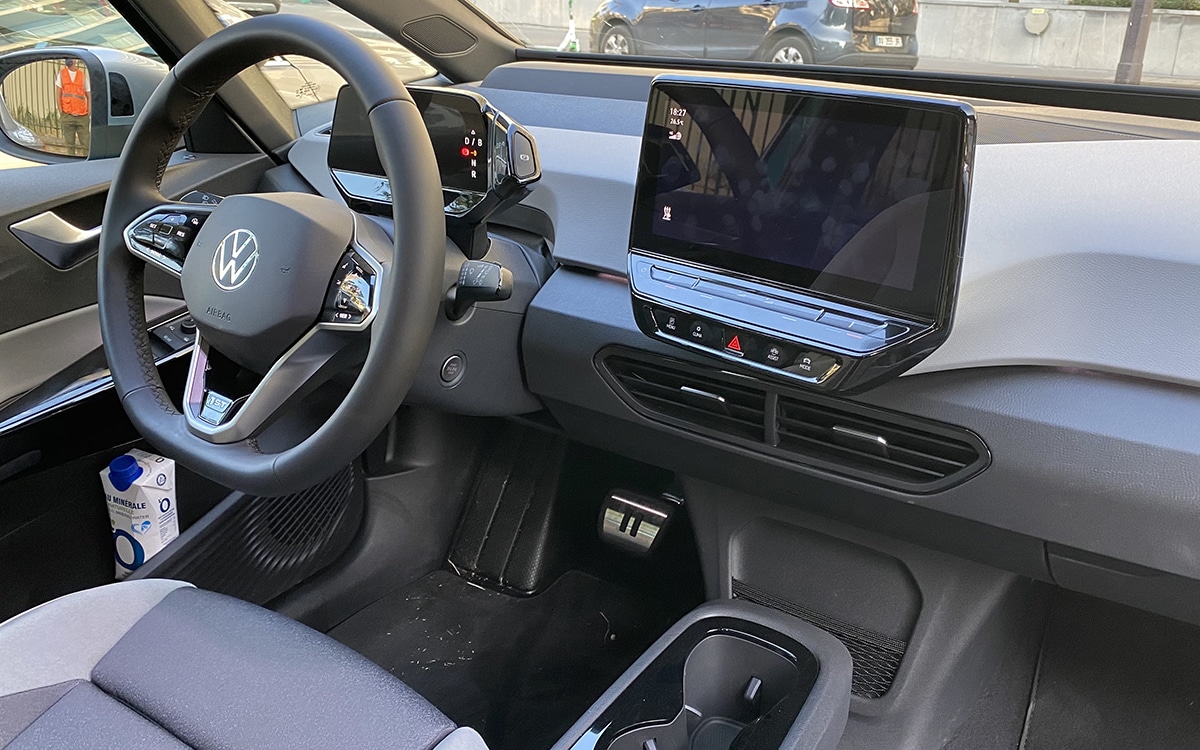 Infotainment screen displays a diagonal of 10 inches. Bright and well-defined, its interface is rather successful with its main page reminiscent of Apple CarPlay. But you just have to venture into the sub-menus to get complicated. 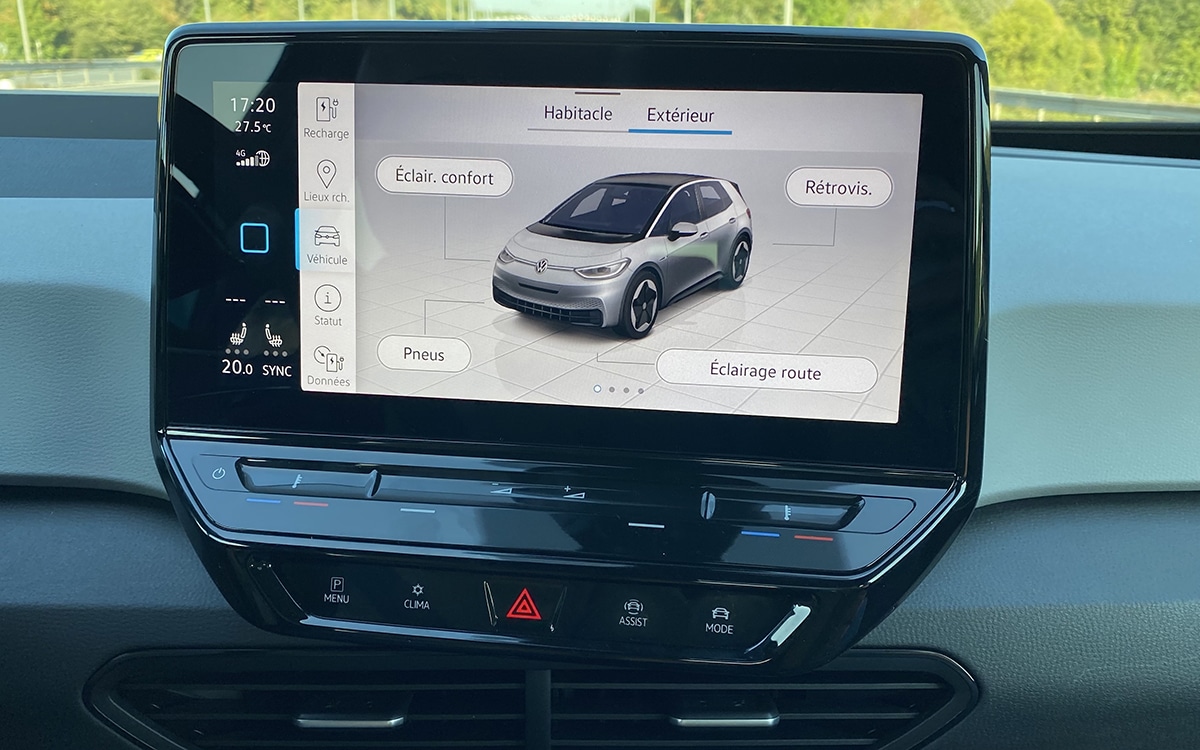 In addition, navigation can be improved with a flagrant lack of information on nearby charging solutions. However, Volkswagen has chosen to deliver the ID.3 as is while adding some missing features by the end of the year (route planner, Apple CarPlay, and heads-up display with augmented reality). An update that will require a free return to the workshop. 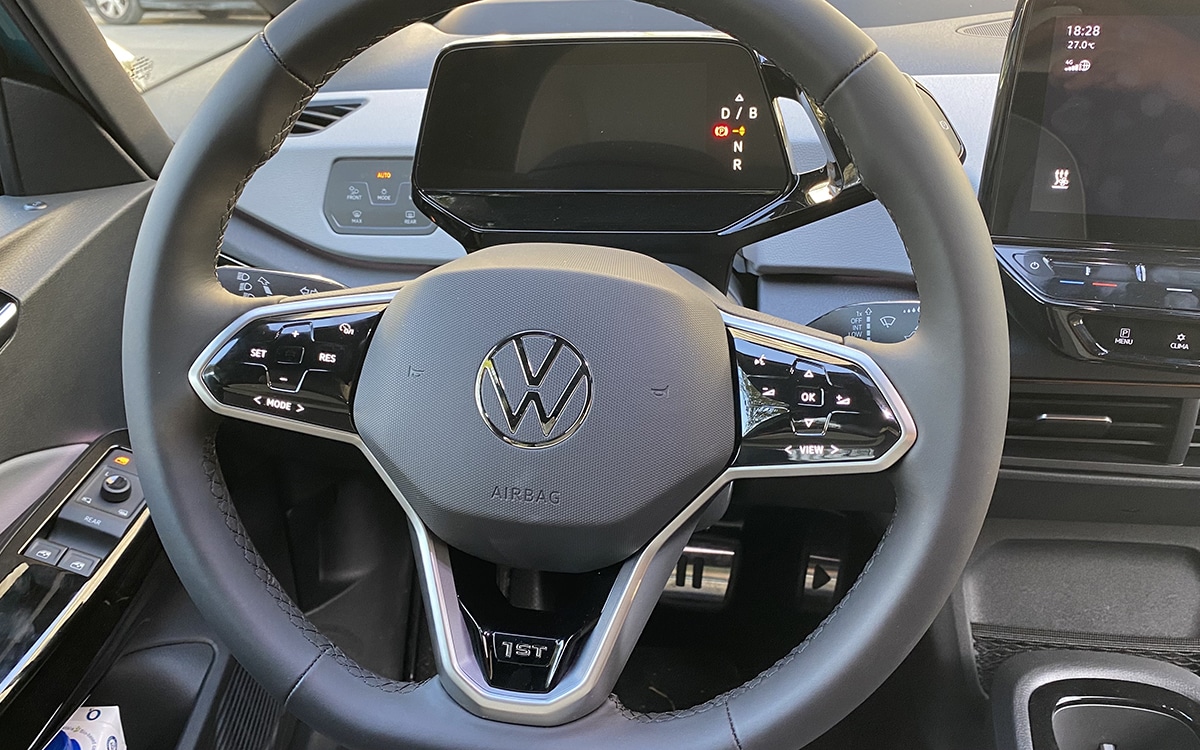 Our test took place over a day between Paris and Sainte-Céronne-lès-Mortagne (Orne). A route of nearly 350 km which included a few expressways and a portion of the motorway. Simplicity is the key word of the Volkswagen ID.3. Climb aboard with the key in your pocket, turn the selector on the steering column and off you go. A dynamic LED strip takes place under the windshield. It lights up to indicate that the car is ready and also supports the navigation system by scrolling to the right or to the left to indicate the direction to follow. 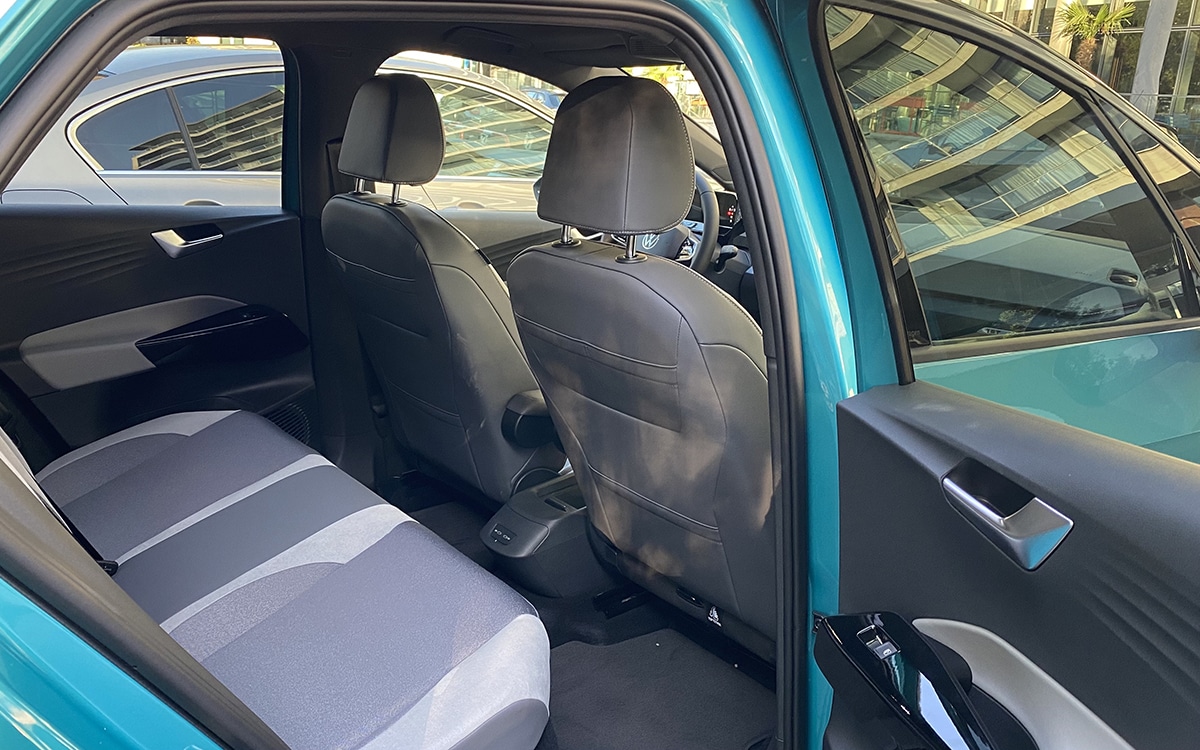 Necessarily, silence is essential in the passenger compartment, especially since the aerodynamic and rolling noise are correctly filtered. Our ID.3 1st Edition had nice 20-inch rims that were fearful for comfort, especially with a stiffer suspension to compensate for the weight of the car. Fortunately this is not the case, including on degraded roads. 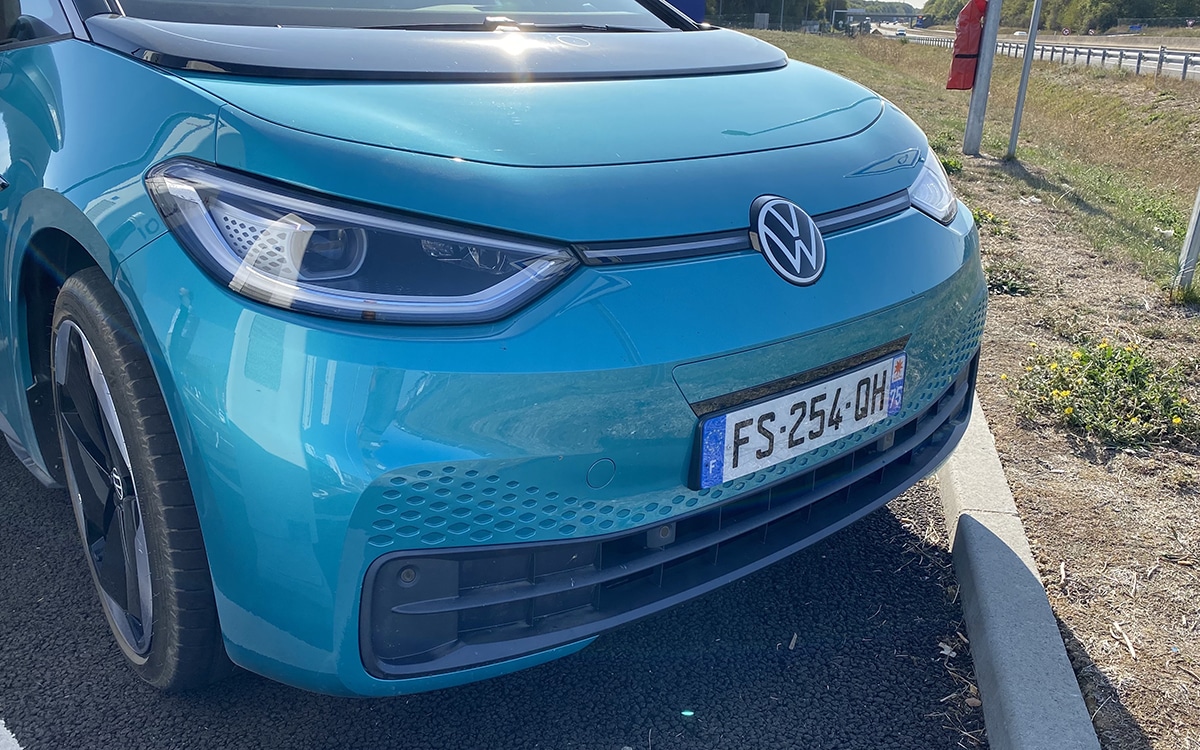 Agile, the ID.3 displays a sporty compact behavior when you have a heavy foot on the accelerator. Obviously, since 310 Nm of torque are available immediately. But rather than being the first at the next traffic light, it’s mostly reminders that facilitate overtakingeven at high speed. 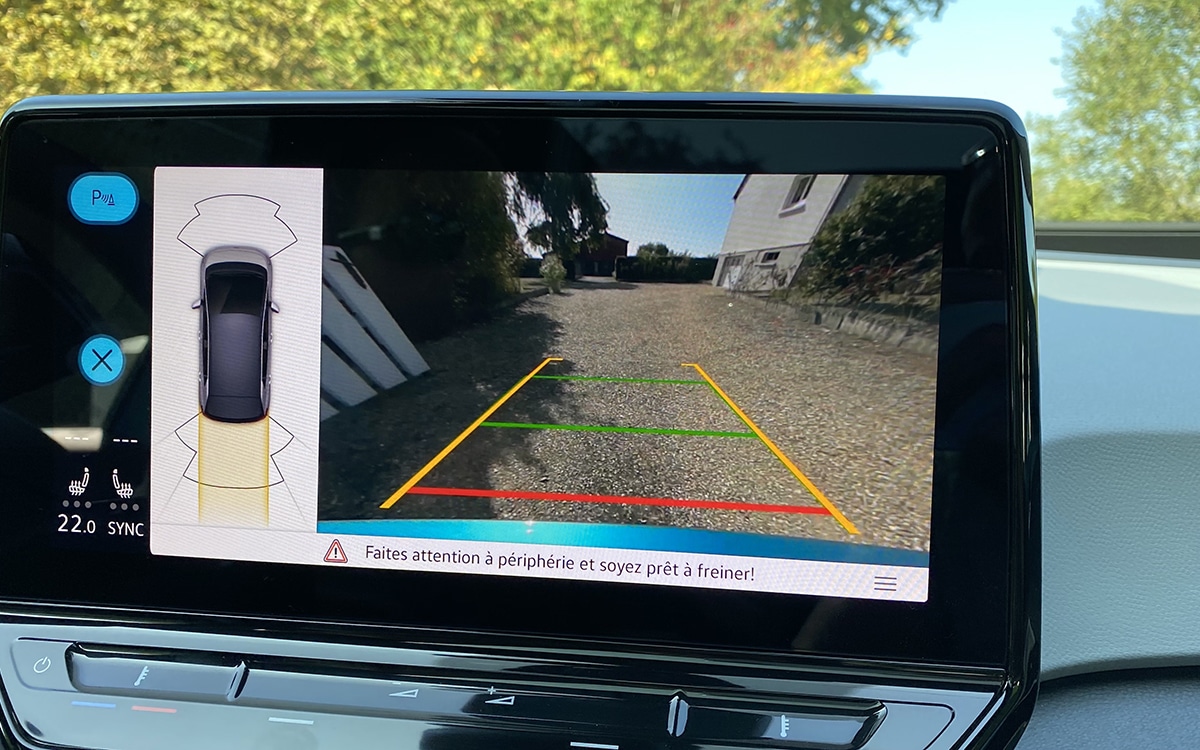 On the subject of safety, the car has now proven driver assistance systems, including the predictive and cooperative regulator. The latter is based on the mapping in order to slow down the car around a roundabout for example. In addition, Travel Assist maintains the ID.3 in its lane while maintaining a sufficient safety distance from the vehicle in front. The system also works in the absence of ground markings on one side, something that we were able to verify along an embankment. Of course semi-autonomous driving is also required and a touch of the capacitive steering wheel is enough to indicate to the car that the driver is in control.

Indeed, better stay alert, because if the ID.3 has perfectly detected a cyclist driving on the side of the road for example, it has also applied a strong brake stroke which can surprise the vehicle behind it. On the other hand, the system has the advantage of making traffic jams more bearable. 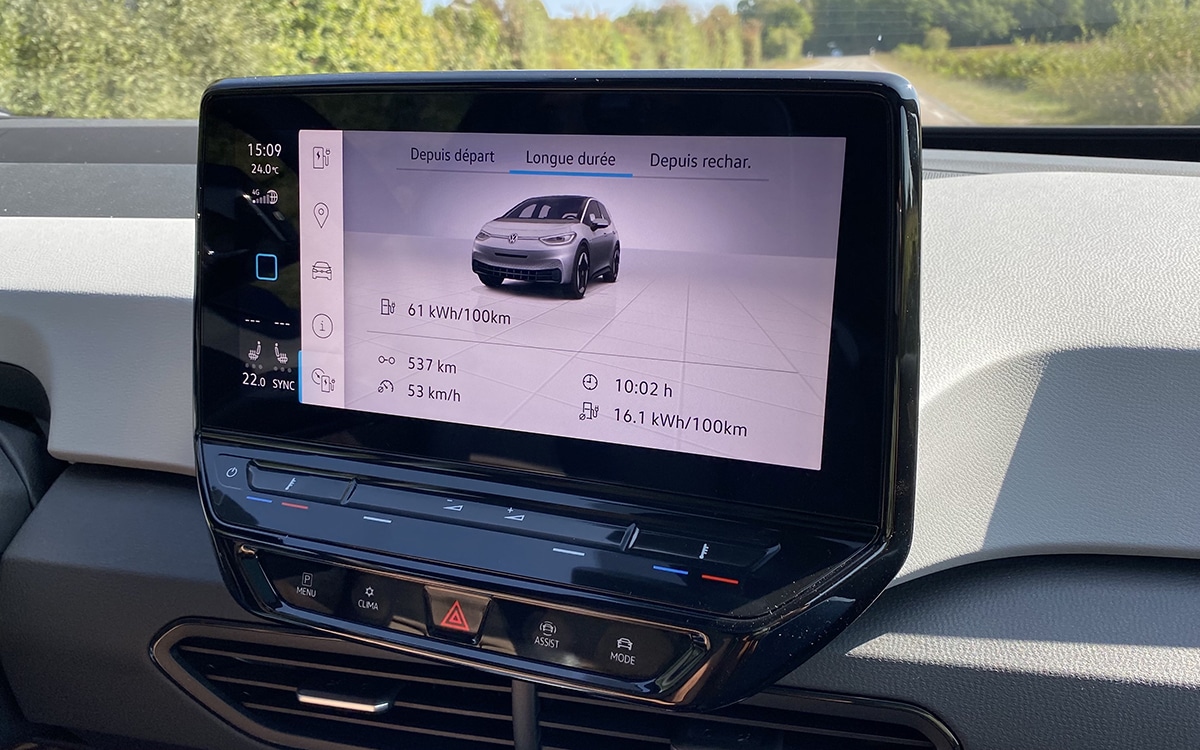 Volkswagen chose to do not integrate paddles on the steering wheel nor any recovery selector other than mode B on the selector. It is only an engine brake. But this mode of recovery is rather light by only slowing down the car without going to a complete stop. So use the brakes rather than single-pedal driving like on other competing electric cars. On the other hand, the recovery seems efficient especially in the Parisian traffic jams which allowed us to recover nearly 10 km in 15 minutes. 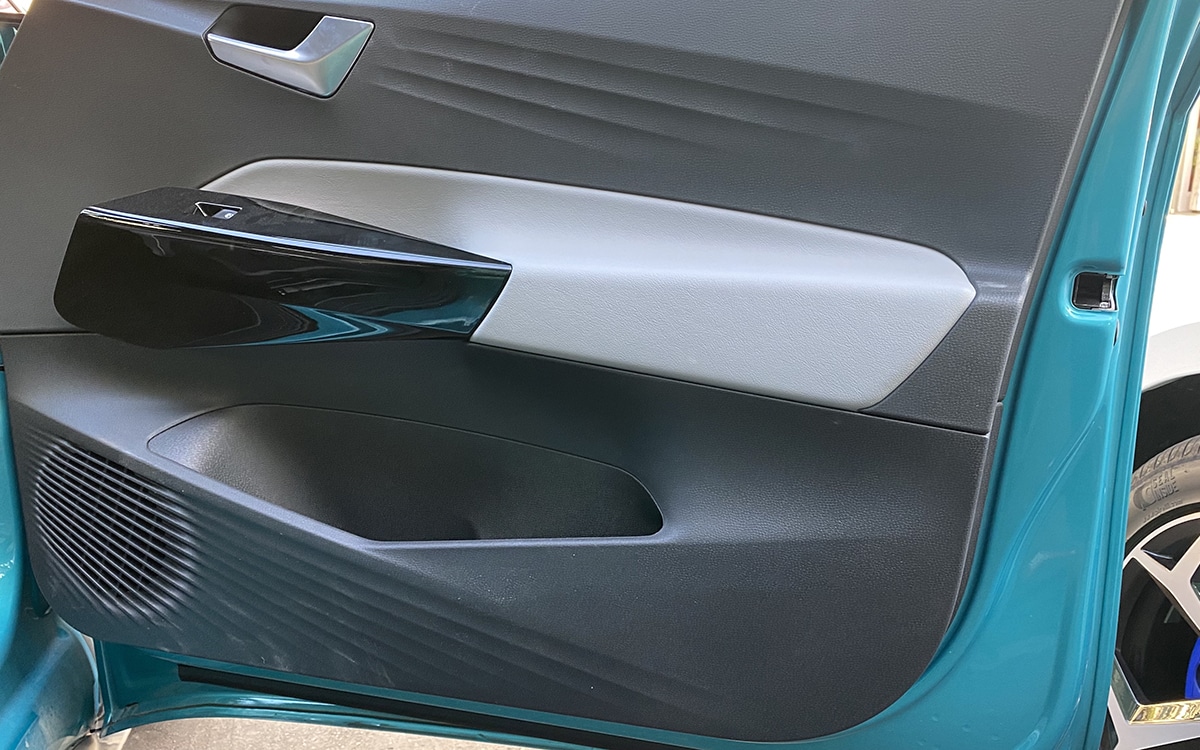 Conversely, if its battery allows you to venture out on the highway to go on weekends or on vacation, the Volkswagen ID.3 is not as comfortable on the highway. The average consumption of 16 kWh / 100 km then climbs to almost 22 kWh / 100 km at a speed of 130 km / h with the air conditioning on. However, the ID.3 is not confined to urban use and its ability to travel will above all be conditioned by the charging stations available on the course.