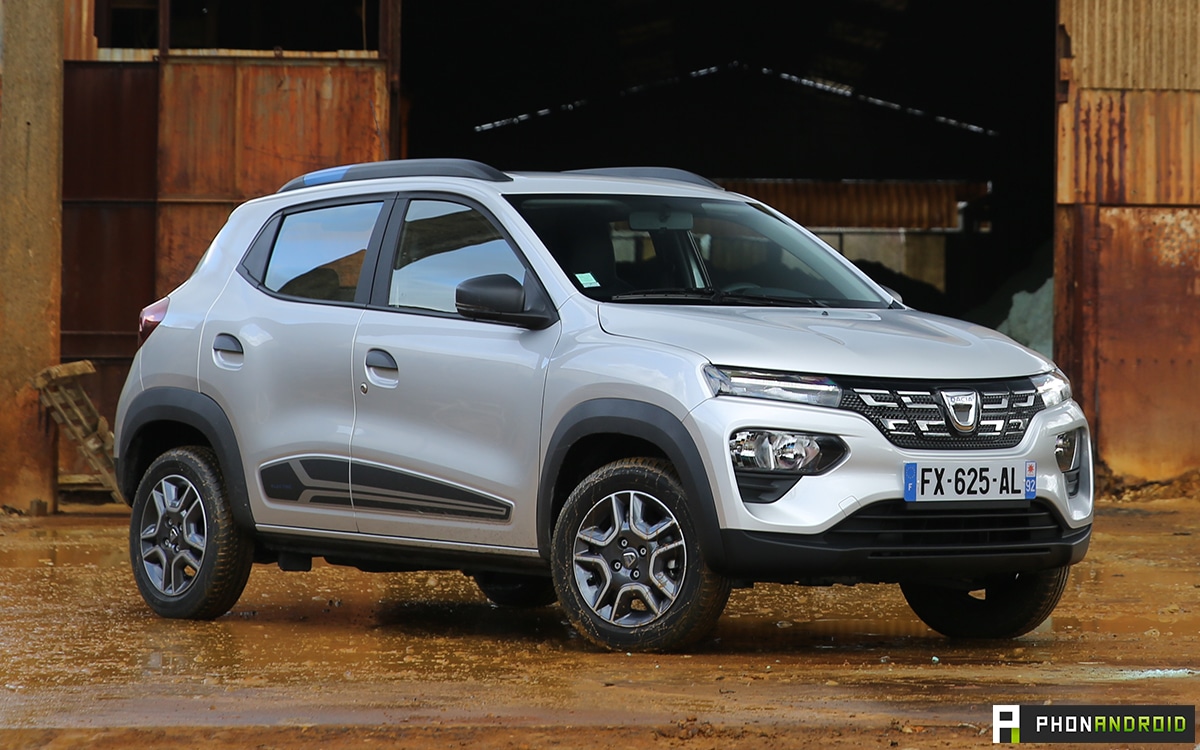 With the Spring, Dacia offers the cheapest electric car on the market in France. But is a controlled price enough to offer electric mobility to as many people as possible and to secure the head of sales? Answer in our full essay. 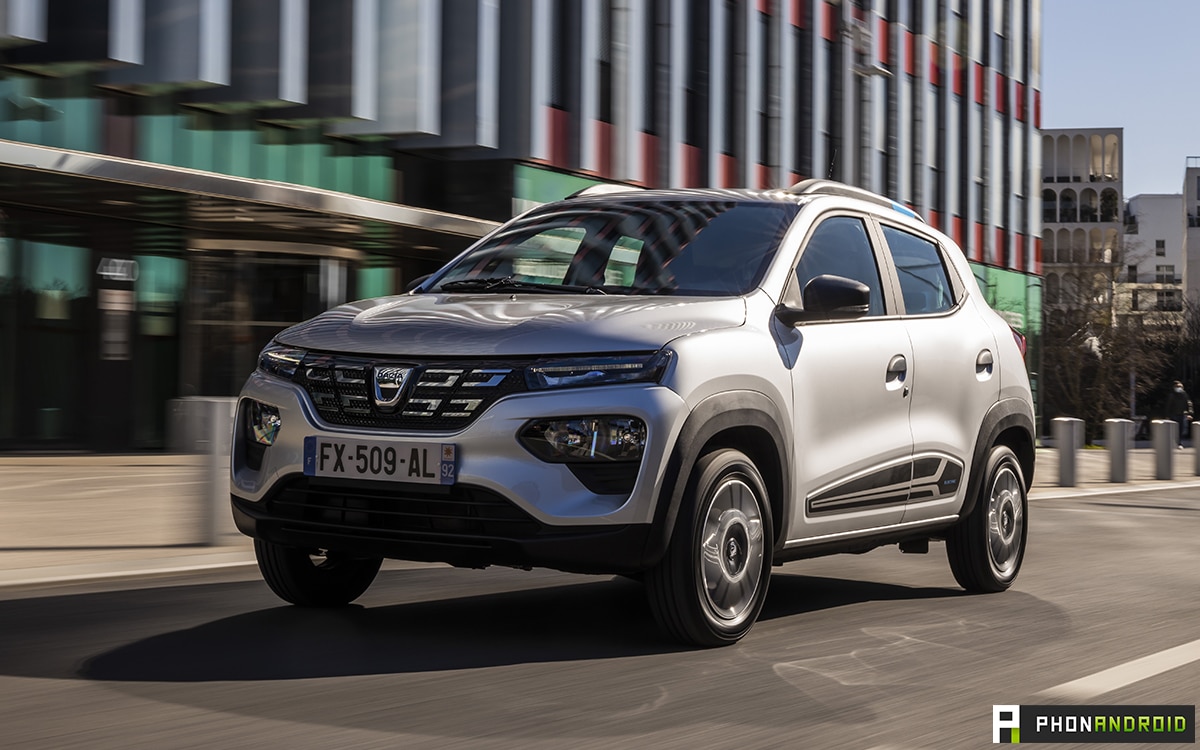 In orbit in the Renault-Nissan Alliance for 15 years, Dacia has succeeded in building a serious brand image in France. Its recipe: to offer pragmatic, practical cars with proven technologies, at a minimum price. Result: the Dacia Sandero is the first car sold to individuals in France, but also in Europe. Now is the time for electrification and there is no question for Dacia to change its mind. Its goal today is to offer electric mobility to as many people as possible, with a licensed car (unlike the Citroën Ami) that is comfortable in the city, but also capable of venturing on fast axes.

The most Chinese of Romanian cars

To achieve its objectives, Dacia therefore once again places its trust in the Renault group’s mechanical component bank, drawing generously from references already known to us or elsewhere. And this is particularly the case with the technical basis used, which is that of the Renault City K-ZE sold in the Middle Kingdom, itself derived from the Renault Kwid (with thermal engine), intended for emerging markets and which shares its CMF-A platform with the Datsun RediGO. This is an already well-amortized platform, which is added to manufacturing in China, thus making it possible to better control costs. 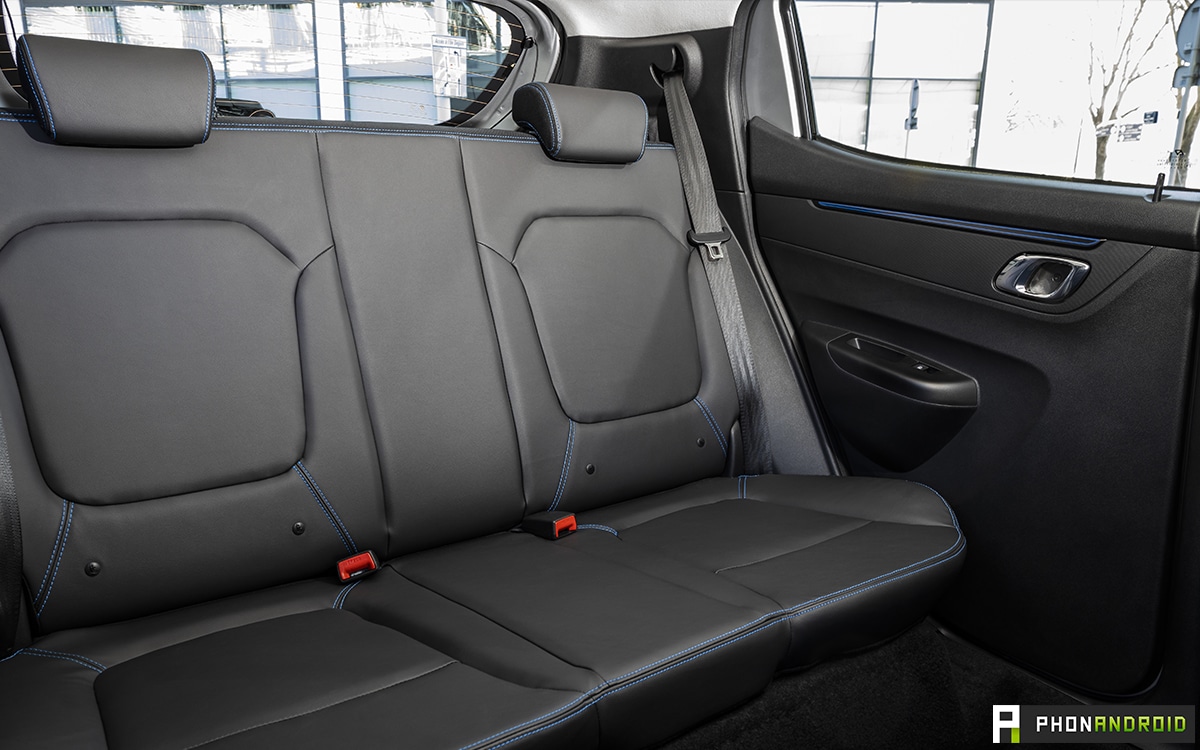 The Dacia Spring is therefore closer to the City K-ZE, announced with great fanfare by Carlos Ghosn at the time. Apart from a few personalized borders, the Spring retains the lines of its Chinese cousin and only the grille marks the difference. The latter, molded in a plastic that seems fragile to handle, hides the Type 2 or Combo charging socket. We also appreciate its very correct presentation for a car making price its hobbyhorse: it comes with body-colored shields and 14-inch wheels from the first trim level, dressed in hubcaps that perfectly imitate aluminum rims. The upscale Comfort Plus version adds an Orange Pack, with edging and mirror caps in the eponymous color.

In its 3.74 meters (for 1.58 meters wide and 1.52 meters high), the Dacia Spring can carry four passengers (the rear seat is only approved for two places) and a 270-liter trunk (which can climb to 620 liters with the bench lowering in one piece). Completely correct values ​​given the size of the city car, longer than the electric Fiat 500 by around 10 cm. The battery with 27.4 kWh useful capacity is installed on its side under the rear seats so as not to eat up space on board, while all the mechanics, consisting of a synchronous motor with permanent magnets, are housed under the front cover. 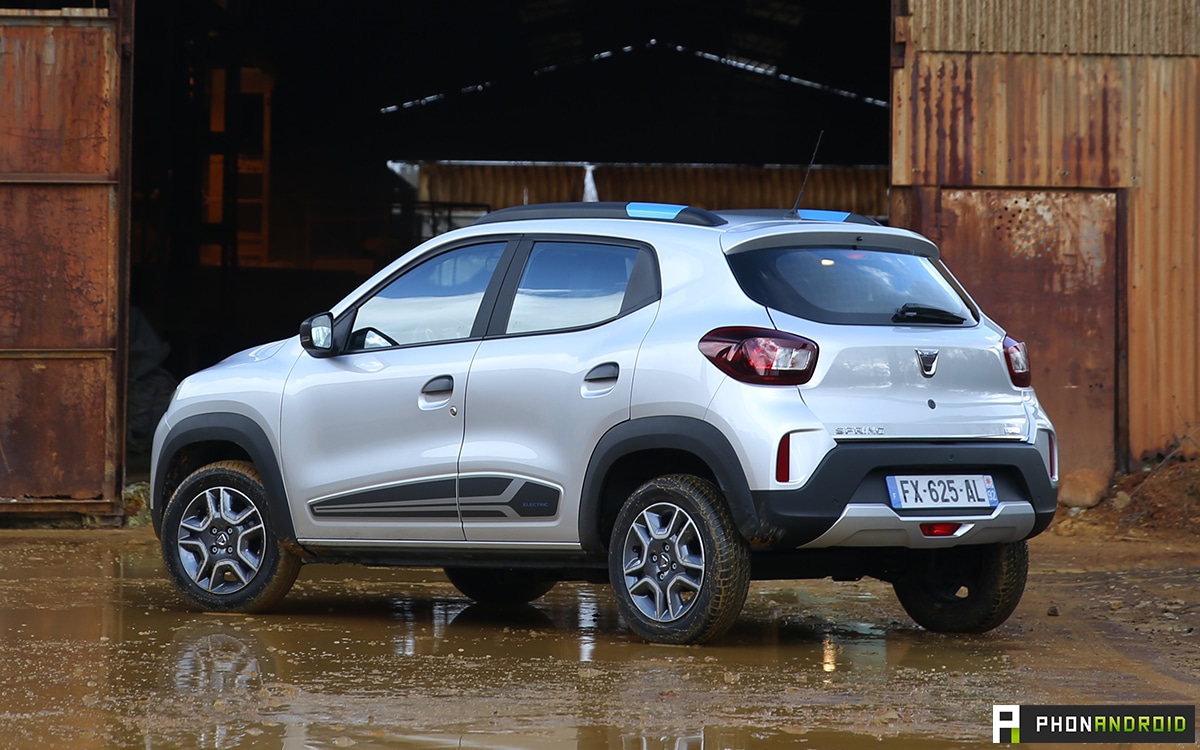 Inside, no surprises: hard plastics that sound hollow are legion. These are the fruits of an extensive search for savings. The atmosphere is therefore hardly different from those delivered by some city dwellers of the 90s. But like the latter, it should be noted that the materials have the advantage of being robust for everyday use. It should also be noted that no version with a summary presentation will see the light of day: when questioned by us, the Dacia teams confirmed to us that the Spring, marking a new technological era in the history of the brand, will only be offered ‘with its three variations (Business, Comfort and Comfort Plus) to the complete serial equipment. 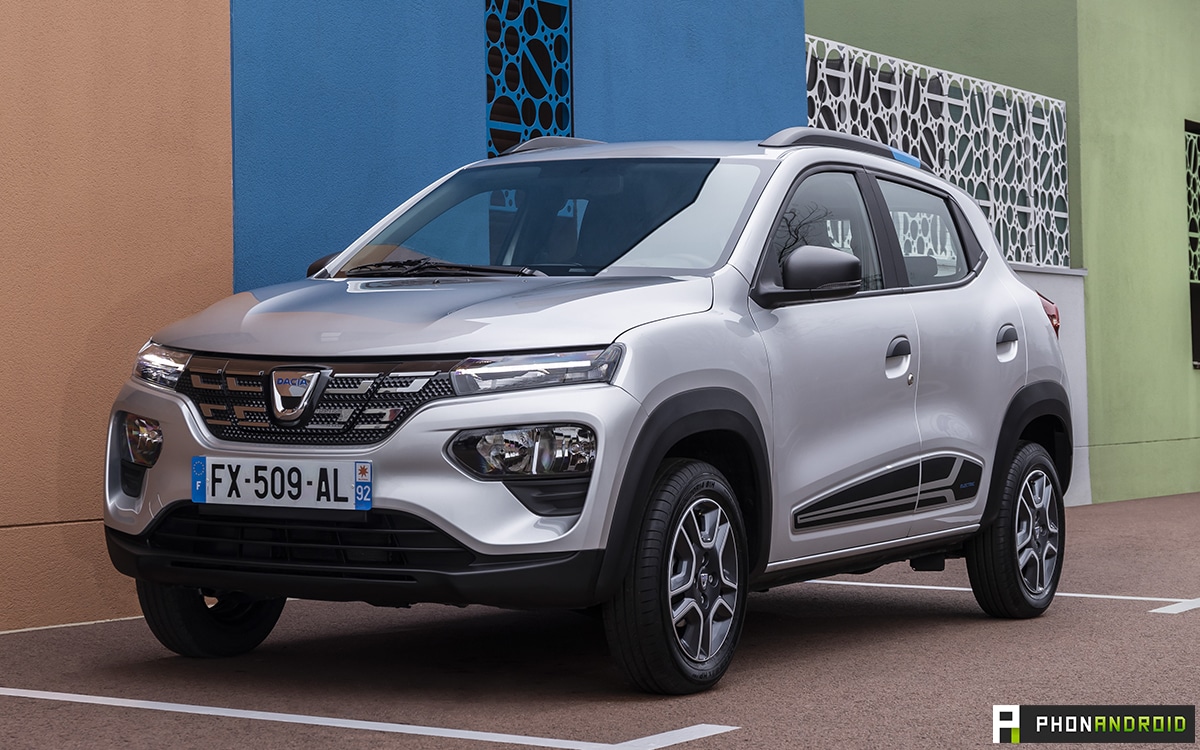 Behind the wheel, it’s hard to find your driving position. And for good reason : the steering wheel is not adjustable either in height or in depth, while the seats, with their short, firm seats, cannot be lowered. You therefore need a little adaptation time as soon as you get on board. After a turn of the key in the traditional neiman, the mechanics are awakened. Speed ​​selector on D, it is then possible to move forward. As long as you don’t forget to release the mechanical handbrake (which you might also forget to pull when getting out of the car).

You can quickly find your bearings inside, with controls that fall directly to hand, especially those related to air conditioning. The touch screen is easy to handle, but the interface can sometimes show a certain response time, especially when it comes to launching navigation via the connection to the smartphone. 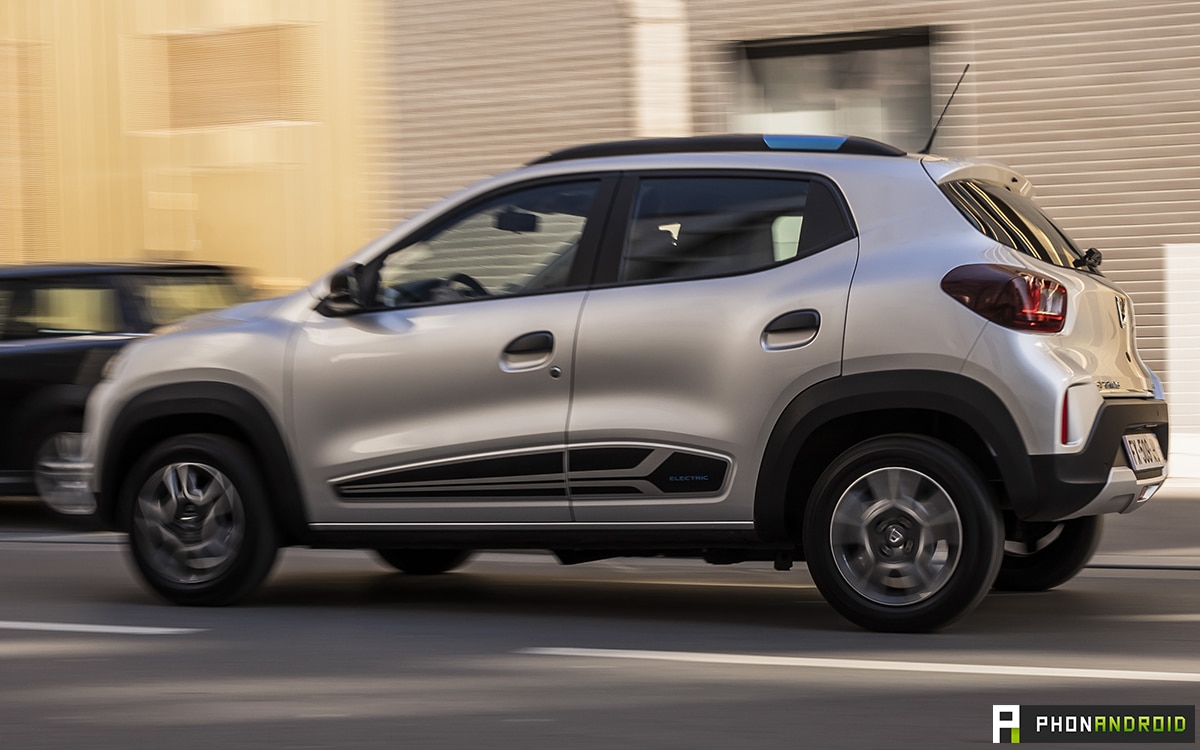 This is the city she prefers

The 33 kW (45 hp) electric motor for 125 Nm of torque It’s okay to keep the car moving at regular pace around town, terrain where the Spring feels naturally at ease. Its small size allows it to slip easily into the flow of traffic and its particularly light steering is an advantage here. Just like the turning circle of just 9.40 meters. The soundproofing measured is not prohibitive, even if the exterior soundscape is heard on board. On the other hand, the suspension with imprecise guidance proves to be brittle on speed bumps or on cobbled streets : the noise then diffused in the passenger compartment makes any discussion with the passengers impossible, while the vibrations of the interior furniture become disturbing. What reminds us of the resonances that can be encountered aboard a Citroën Ami, for example. 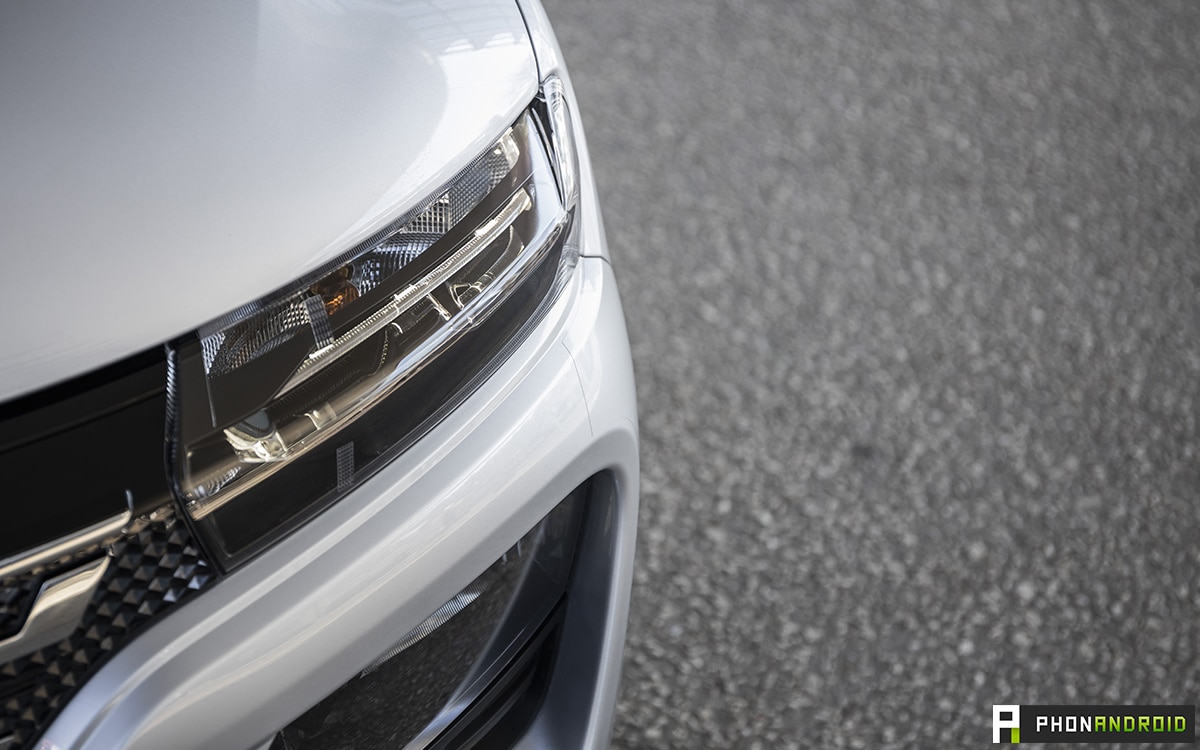 But unlike the unlicensed electric chip, the Dacia Spring can venture a little further from the cities. However, it will not be at ease on expressways, such as the ring road or highways. Because it is not so much the weight of 970 kg all full facts as the smooth torque curve which comes to lengthen the accelerations once the bar of 50 km / h crossed (in 6.5 seconds) which prevents the escapades at high speed . If the 0-100 km / h announced in 19.1 seconds annihilates any cannon insertion in the flow of traffic, the recovery exercise from 80 to 120 km / h in 28 seconds (!) prohibits any overtaking. This is especially true on secondary roads, where overtaking must be done quickly so as not to interfere with users on their way.

Still on the motorway, the Spring can hardly maintain its top speed of 125 km / h due to its particularly fuzzy heading and too much wind sensitivity. With a headwind, performance lengthens and fuel consumption soars. It proves here that its use has mainly been studied for an evolution in town at less than 50 km / h. 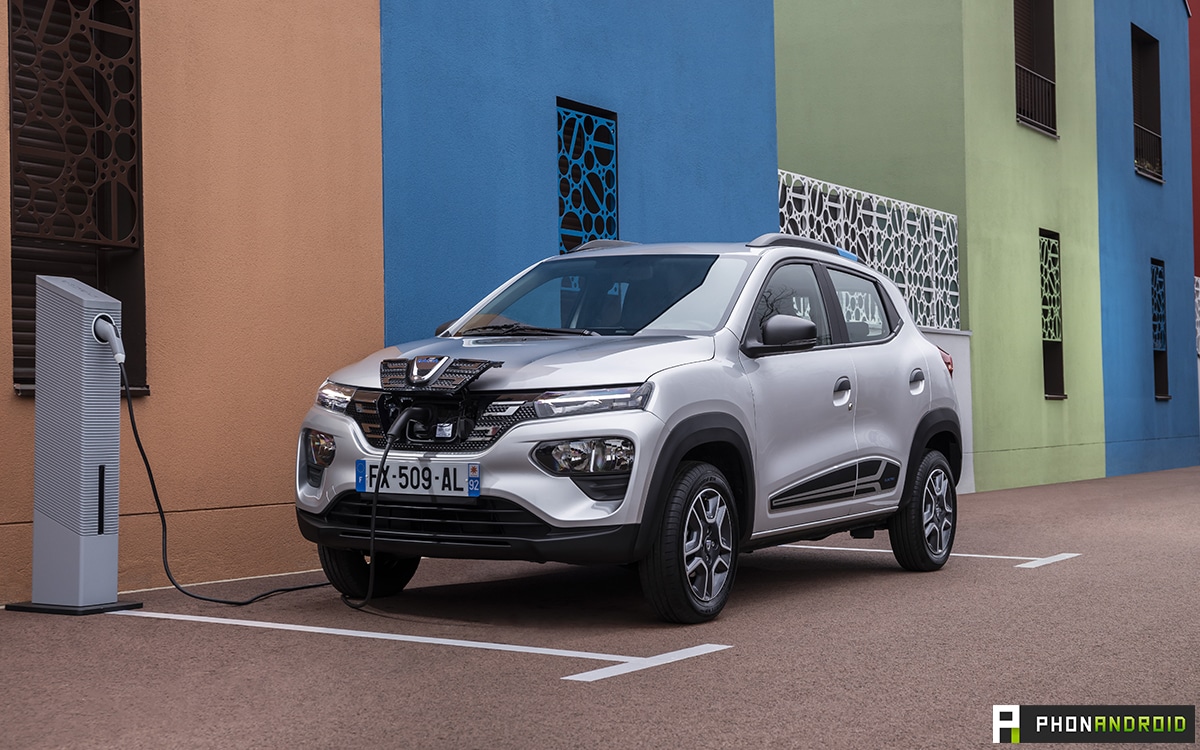 The electric city car finds a semblance of balance on the secondary network. She feels much more comfortable there than on the expressways and can easily make her daily commutes for customers who live outside of the big cities, as long as she is not in a rush. Because as soon as the bends appear on the horizon, anxiety increases. The direction then become more blurred does not allow to feel the limits of grip quickly reached of the Ling Long Green Max tires supplied as standard, very poorly rated in terms of energy savings (class E) and grip on wet ground. (class C). Enough to wake up the ESP on rainy days, which acts noisily on the front brakes. A more reasonable choice of tire should not be neglected long before arriving at the wear indicator of the original rubber.

With past driving experience, the Dacia Spring keeps its promises in terms of autonomy. Announced with an average radius of 230 km according to the WLTP cycle and even 305 km in the city, the city car revealed a consumption of 13 kWh / 100 km. This still gives it a respectable range of 210 km on a route combining portions of national roads and village crossings. In this area, the non-configurable regenerative brake saves energy. On the other hand, its deceleration force is less as the speed increases. 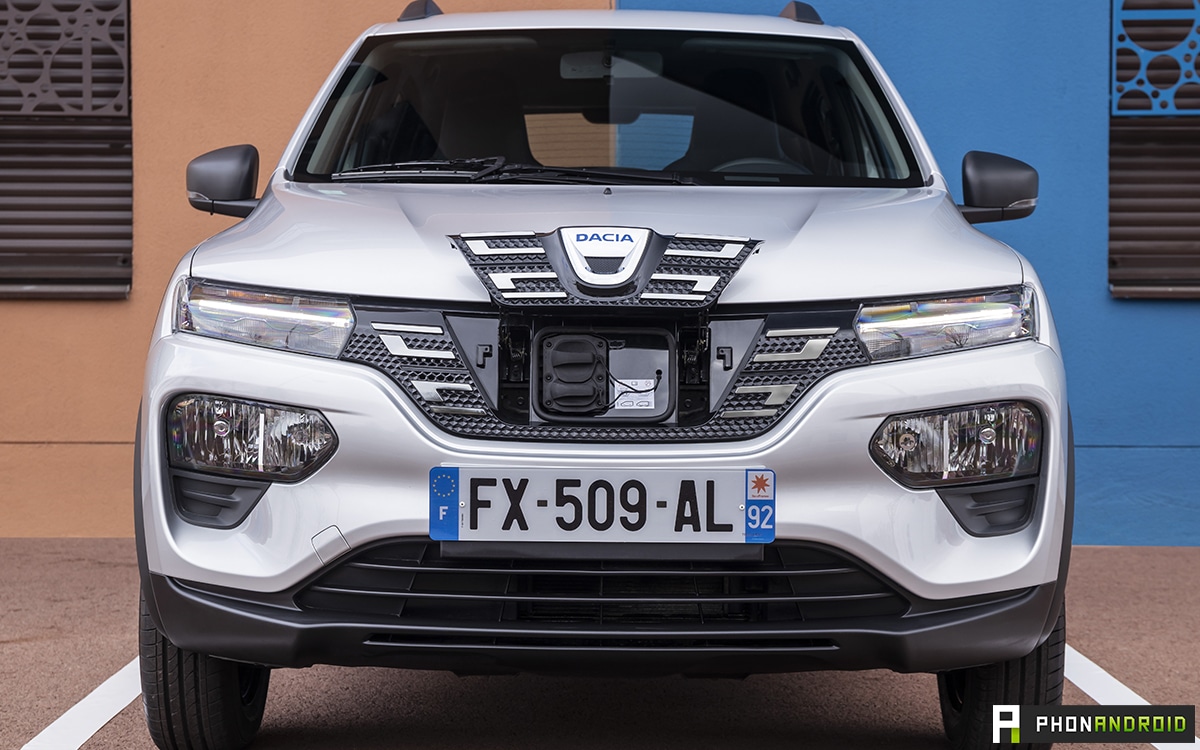 At a slightly faster pace, which it was not originally intended for, the Spring climbed to 17 kWh / 100 km, bringing the range to 160 km. A Renault Twingo Z.E. could not do better because of its smaller battery of 21.3 kWh useful. Note that Dacia has provided an Eco button which restricts the power to 30 hp and saves 9% of autonomy, or nearly 21 km. The power being counted, just like the time during our test, we did not have the opportunity to verify the statements of the manufacturer.

The Dacia Spring comes standard with a single-phase AC on-board charger with a power of 6.6 kW. It takes a full recharge time of 1.30 p.m. on a 220v household outlet. With a reinforced 3.7 kW socket, the immobilization goes down to 8:30 am, while it will be necessary to wait 4h50 on a 7.4 kW Wallbox. As an option at a price of 600 € (available on the Comfort version from 2022), the Spring can be connected to a fast charging station with a power of 30 kW. It takes only 50 minutes here to go from 0 to 80% charge. 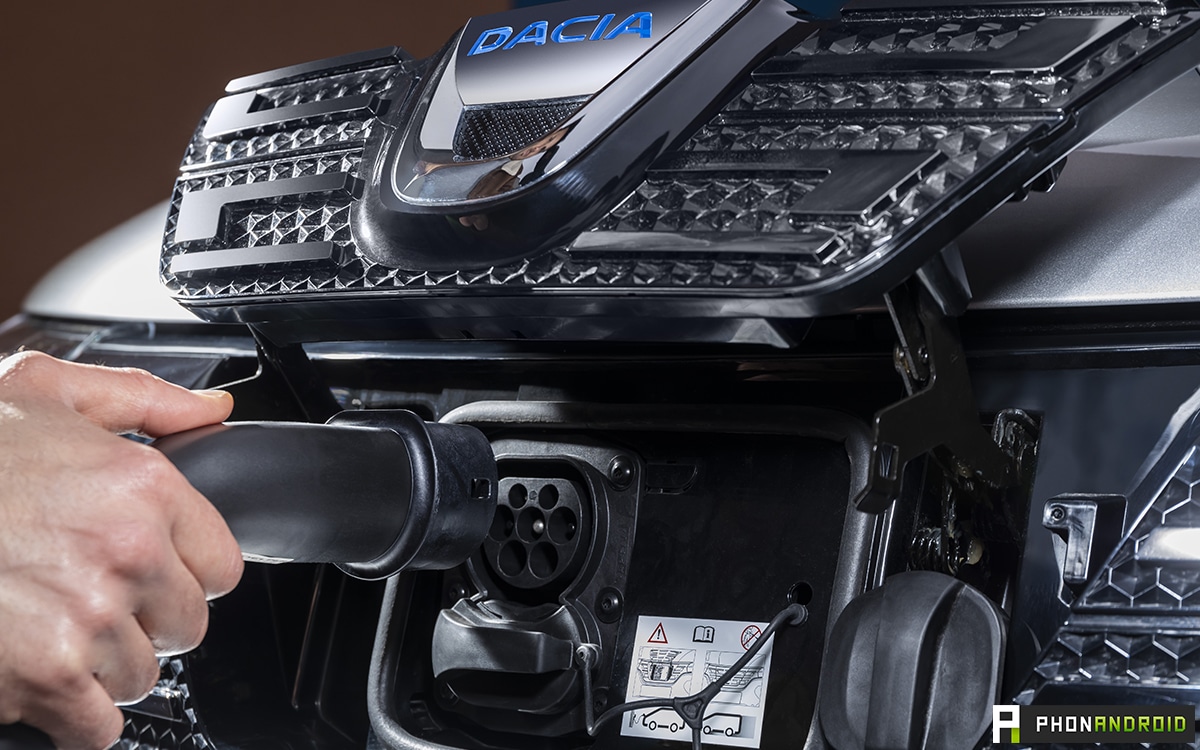 On the other hand, it is in the recharging chapter that the savings are obvious. Because to better maintain its price, the Spring embarks a resolutely basic synchronous motor and does not choose Renault’s wound rotor synchronous motor. With its design, it is one of the strengths of the Renault Twingo Z.E. for example, which can aim for an AC power of 22 kW. A significant advantage in the city, where public terminals with this power are much more numerous than direct current units. Knowing that the Dacia Spring is resistant to use on the motorway, the fast-charging device struggles to be justified in our eyes. 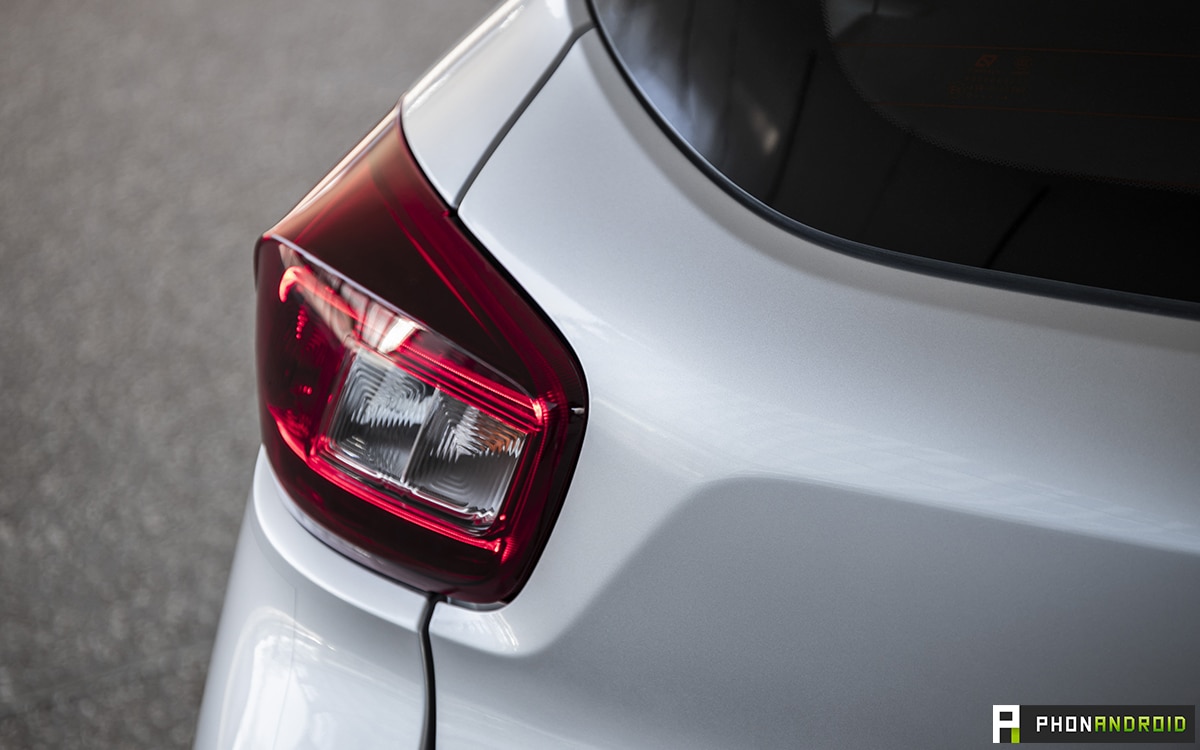 If the Spring is not all good, it allows Dacia to enter the juicy market for electric city cars with an unbeatable selling price. Available from € 16,990 in the Comfort version, it tumbles to the final price of € 12,403 after deduction of the ecological bonus, capped here at 27% of the sale price. It is therefore more affordable at around € 3,300 compared to its cousin Twingo Z.E. and € 4,900 compared to the Volkswagen e-Up !.

And although its AC charging power could be a brake for the few customers who take advantage of public terminals to recharge, it keeps its promises in terms of autonomy. Can be a main car for city dwellers traveling 30 km daily on average according to Dacia, it stands out in our eyes as an alternative solution, complementing the garage alongside a much more comfortable car outside the cities. 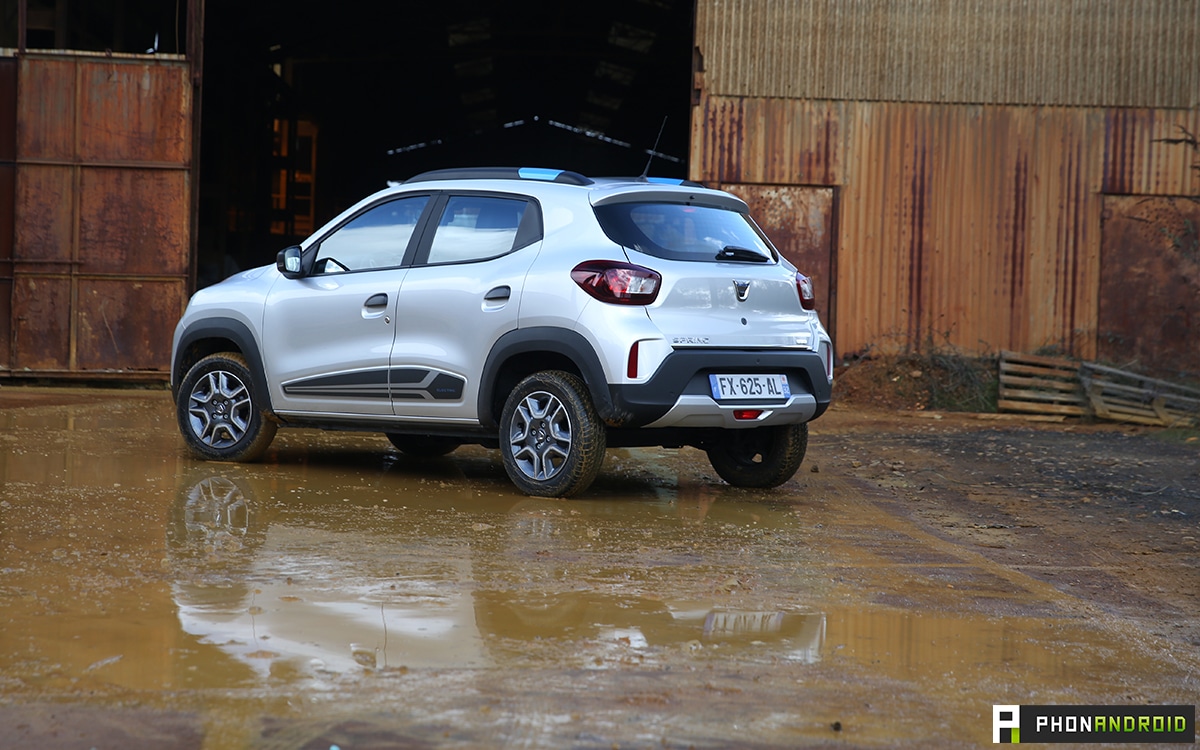 The initial question remains to be answered: does the Dacia Spring give value for its money? Because we can’t help but think that while it is the cheapest in the electric market today, it is not that affordable. We can’t say that the Citroën Ami can overshadow him in the city due to an even more stripped-down definition, but with almost € 10,000 less, the license-free Chevron has no shortage of arguments. 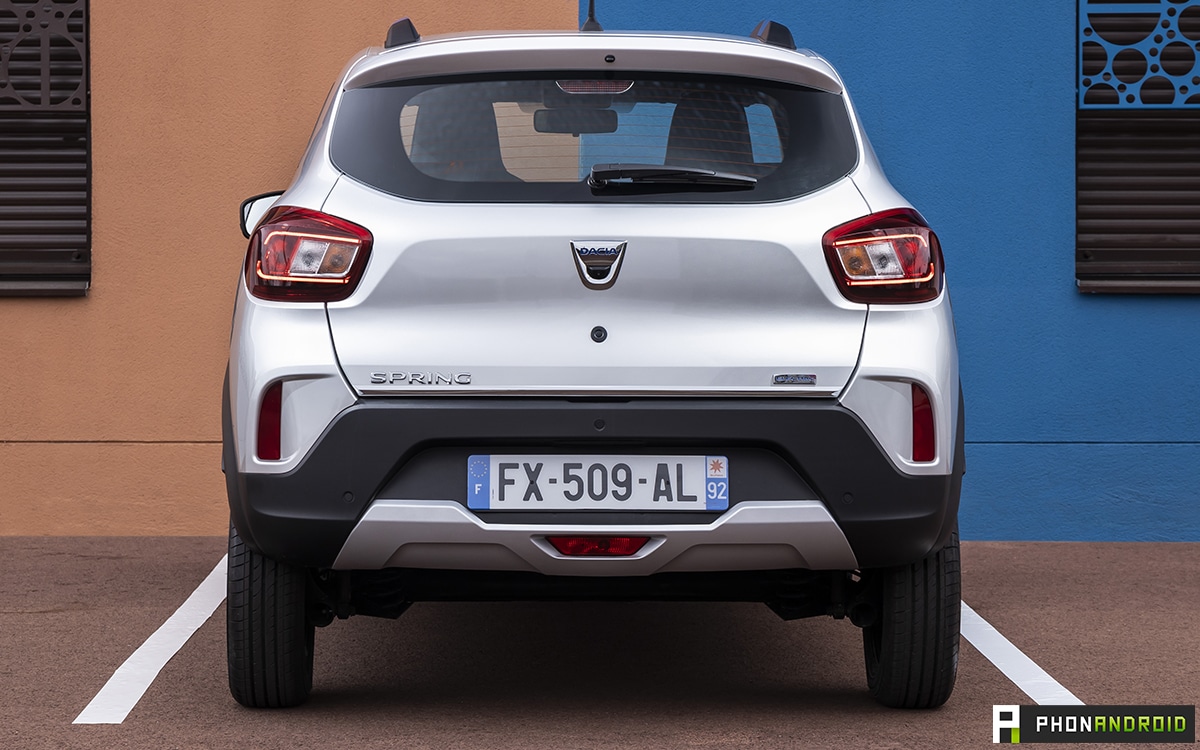 Conversely, the Renault Twingo Z.E. in the Life finish will be able to be much more versatile with its 22 kW AC charger and its power of 81 hp: 0-50 km / h in 4.2 seconds, 0-100 km / h in 12.9 seconds and Top speed of 135 km / h does not stick to the seat, but they will be much more appreciable to follow the flow of extra-urban traffic. And s ’the R & Go radio must be checked as an option (standard on the Spring) at a price of 350 €, the handling of the Twingo on the motorway will be much more reassuring. And to give the driver more confidence, remember that Renault’s electric city car has four stars in the EuroNCAP crash test, while the Spring, according to our initial information, hardly plans to obtain a half-star! 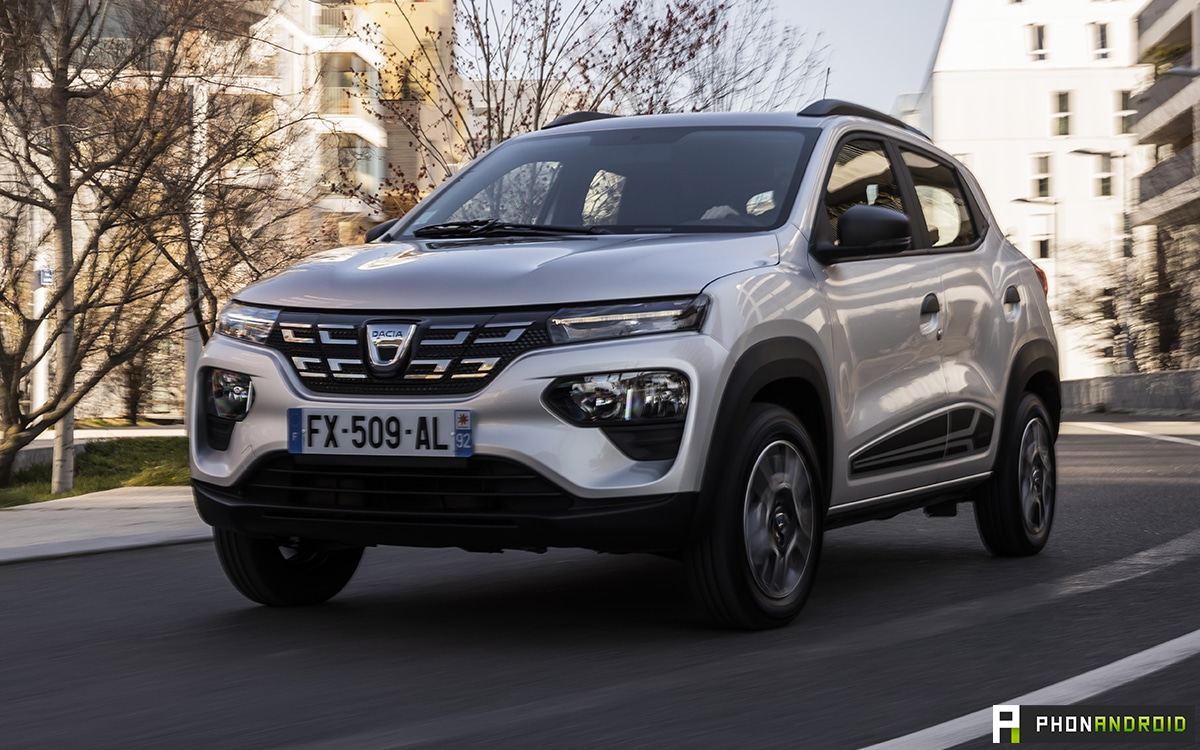