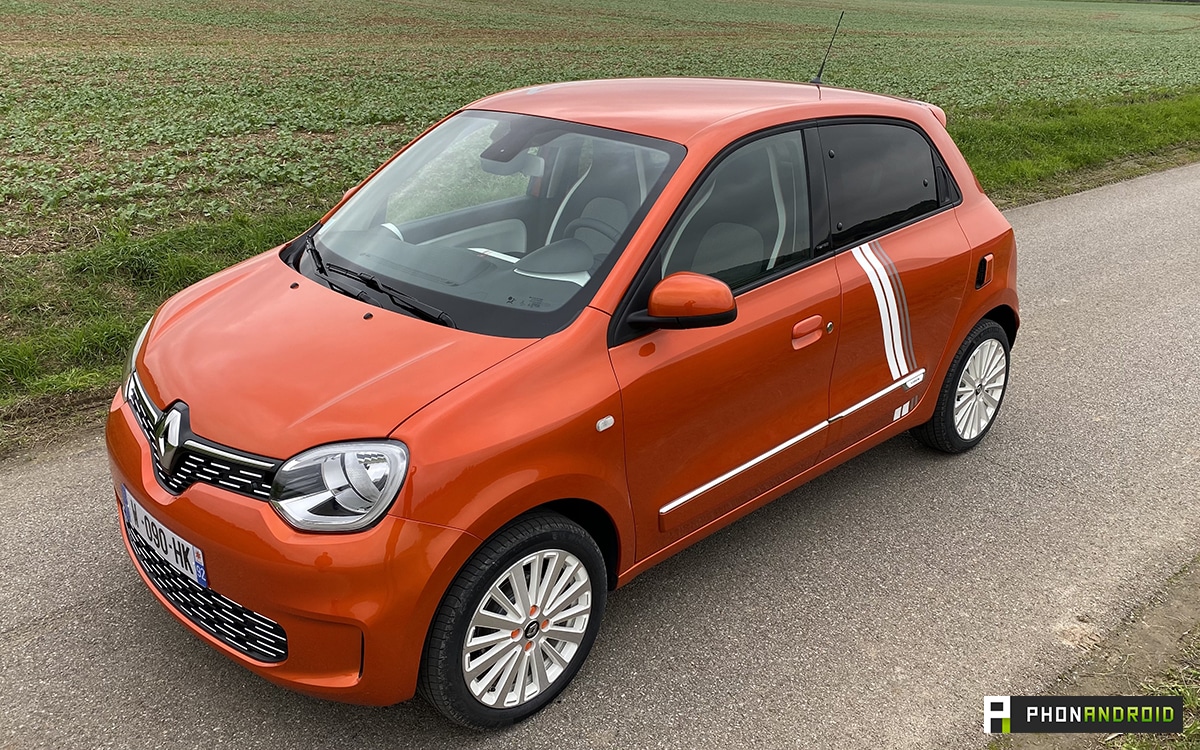 Leader in the electric market thanks to the Renault Zoé, Renault wants to consolidate its position by launching the Renault Twingo Electric. One of the most affordable vehicles in the segment, and one that doesn’t forget to be fun to drive. We were able to get behind the wheel during a test day in Île-de-France.

The automotive market has suffered the full force of containment with a significant drop in registrations compared to last year. At the same time, the electric car continues on its merits with double-digit growth that barely faltered with the pandemic. According to Avere France, registrations have thus increased by nearly 200% in one year.

In this context, the Renault Zoé is at the top of sales month after month. And Renault does not intend to stop there. Indeed, in addition to the gradual hybridization of its models, starting with the famous Renault Clio, Renault Captur and Renault Mégane (in Estate version for the moment), the French manufacturer has just launched a 100% electric version of its other best- seller, the Renault Twingo Electric. 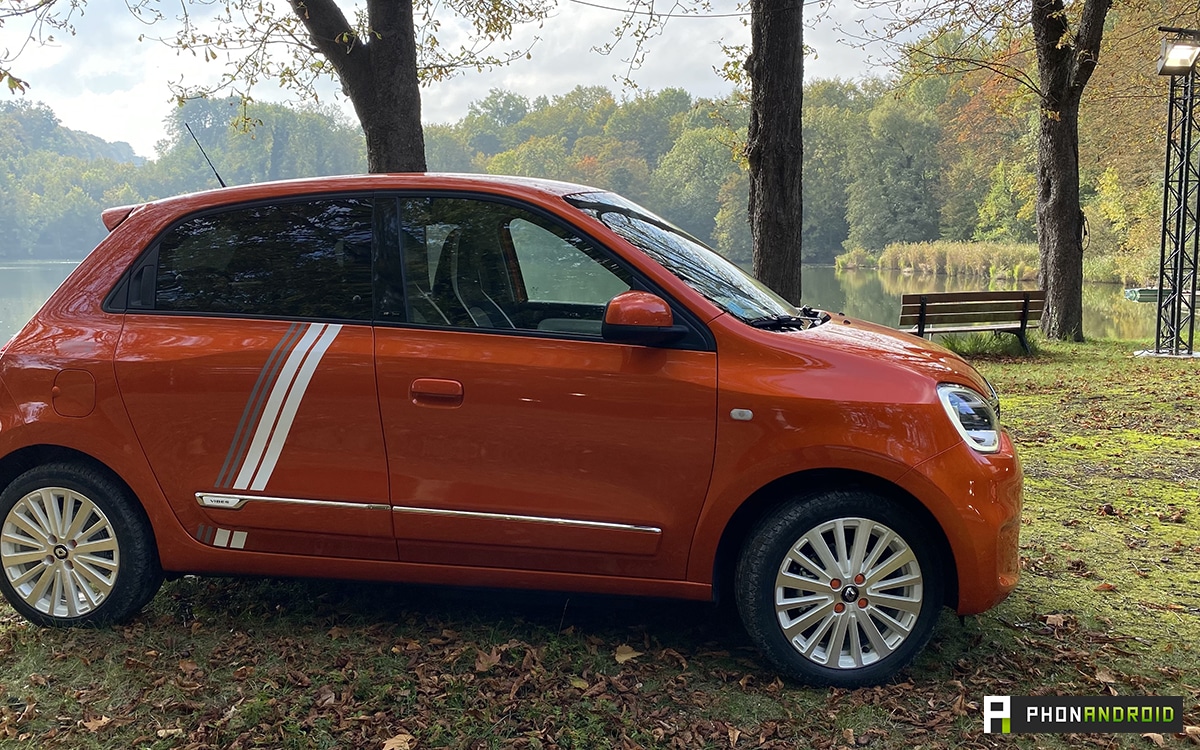 Launched in 1992, the small city car has sold more than 3.75 million copies and conquered the world by being available in no less than 25 countries. In France, the Renault Twingo represents no less than 31% of the city car segment. Suffice to say that this is an extremely important model for establishing the supremacy of the French manufacturer in the field of electric cars. 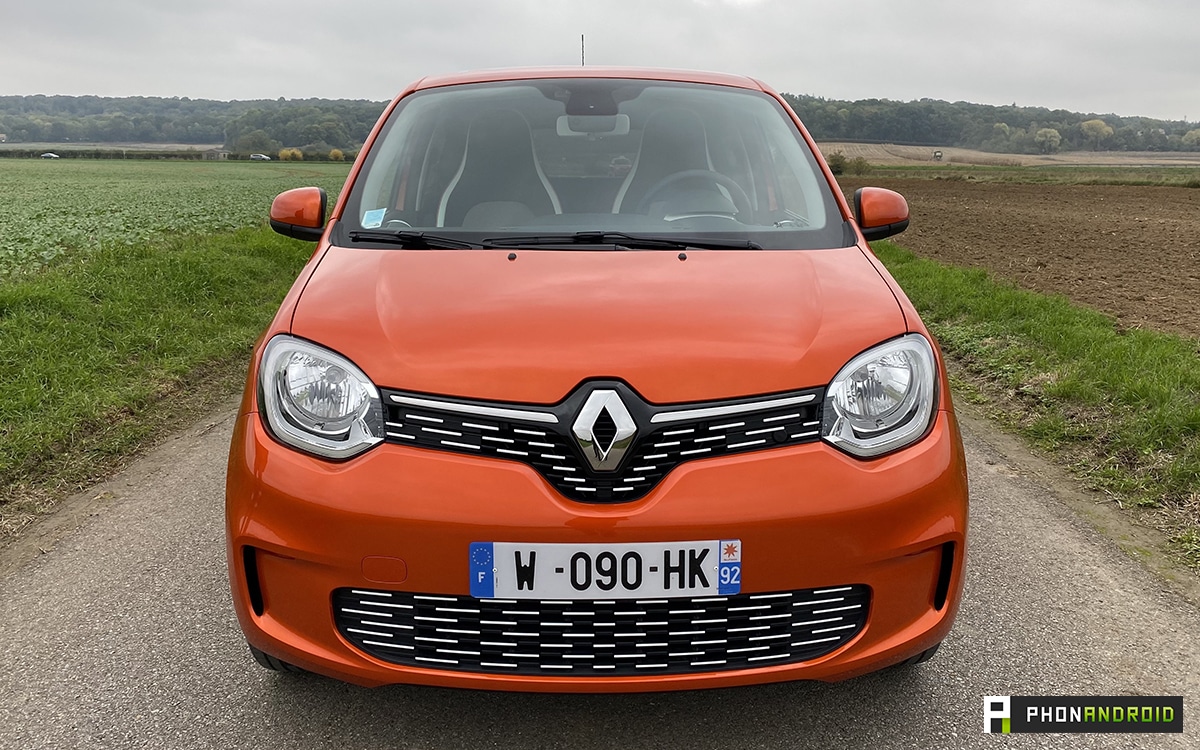 An electric Twingo identical to the thermal version

Based on the same platform as the third generation thermal engine Twingo, the Renault Twingo Electric is distinguished by some aesthetic details. The absence of an exhaust of course, but also bluish accents on the grille and a dedicated stripping. 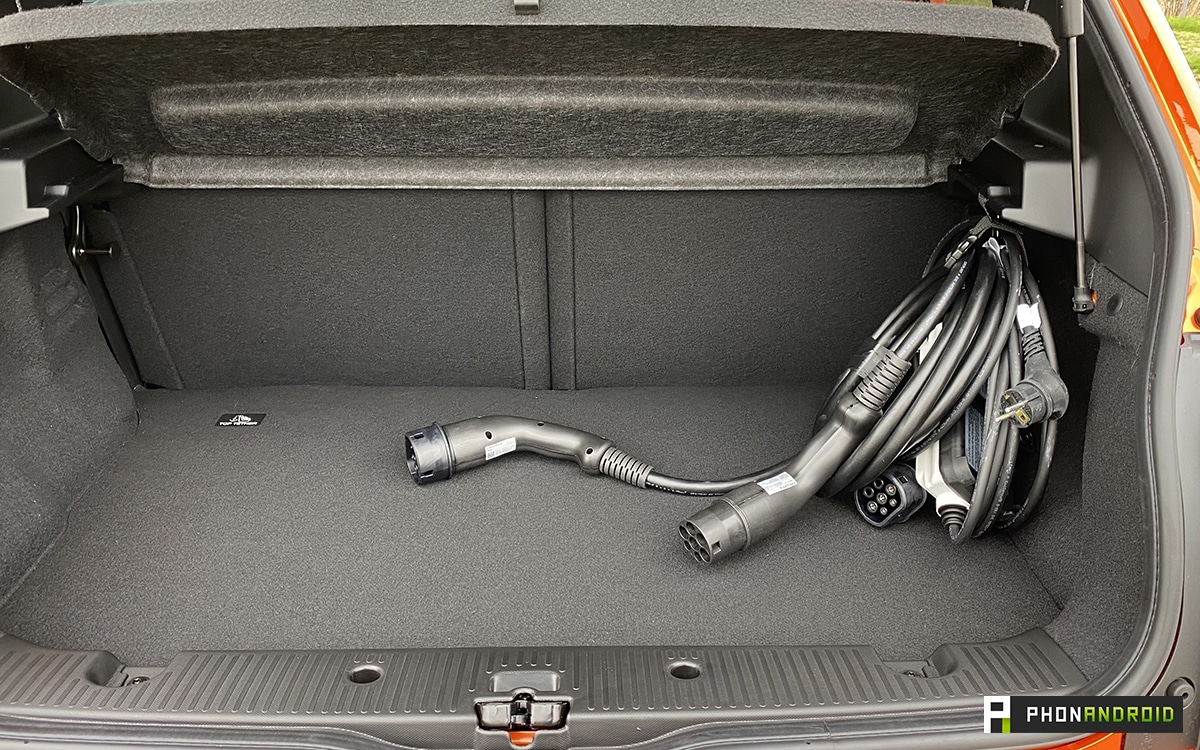 For the rest, the electric car displays the same dimensions with 3.61 meters long. This allows him to offer a space of 2.31 meters on board and to offer an identical habitability, up to the trunk which offers a space of 240 liters. For those who have already taken the wheel, the Twingo has always distinguished itself with its maneuverability. Its electric variation is not left out as evidenced by its steering angle of 45 degrees, and even the possibility of making a U-turn in just 4.39 meters.

An engine derived from the Zoe for the Renault Twingo Electric

Renault did not look very far for the engine of its new electric Twingo either. This is directly borrowed from the Renault Zoé with a block of 60 kW equivalent to 82 horsepower. Integrated into the rear of the car, it delivers instant torque of 160 Nm and can propel the Renault Twingo Electric to a maximum speed of 135 km / h.

Amply sufficient on paper for a small city car, and this will also be confirmed during our test as we will see below. The car is able to go from 0 to 50 km / h in 4.2 seconds. Not enough to tie you to the seat, but you will have enough to extricate yourself from the flow of traffic and arrive first at the next traffic light. 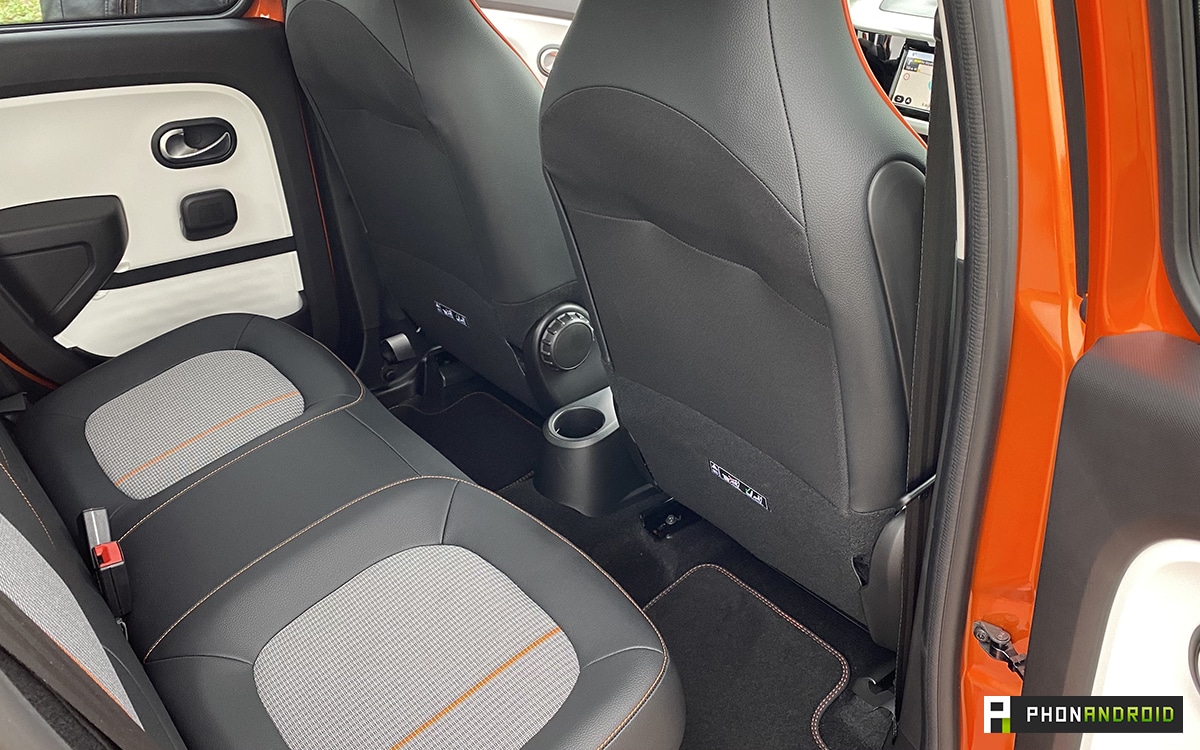 An electric car made for the city

To say that the Renault Twingo Electric is intended to travel the streets of cities rather than chaining kilometers on the highway will not surprise anyone given its size. To power its electric motor, the car embarks a 22 kWh battery at floor level. This benefits from a reinforced aluminum structure, and it is accompanied by a water cooling system which is located at the front of the car. 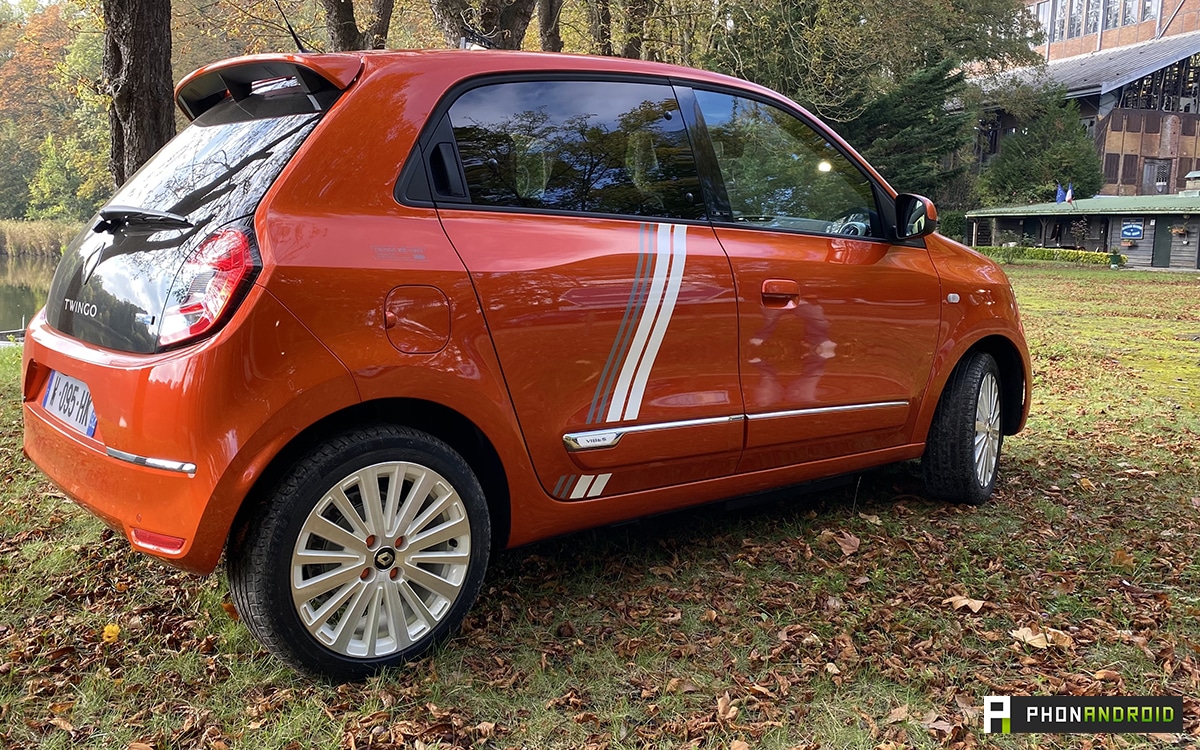 Renault announces a range of 190 km for his electric Twingo in mixed cycle WLTP. The small city-dweller can even grow up to 270 km in “City” mode, ie only in town. An autonomy which should theoretically be sufficient to drive all week without necessarily having to recharge the car every day, the average of trips rarely exceeding 30 km in France, according to the manufacturer.

To optimize efficiency, the Renault Twingo Electric takes advantage of three braking energy recovery modes. Switching from one mode to the other is done with the speed selector which offers three settings B1, B2 and B3. The first lets the car slip away when decelerating. Conversely, the latter displays a sustained deceleration so as to almost lead to a pedal. Almost, because unless you anticipate braking, you will have to press the brake pedal to stop the car. Anyway, this braking energy recovery system is quite effective as we have seen during our journey in Île-de-France. A small descent is enough to grab a few more kilometers on the gauge. 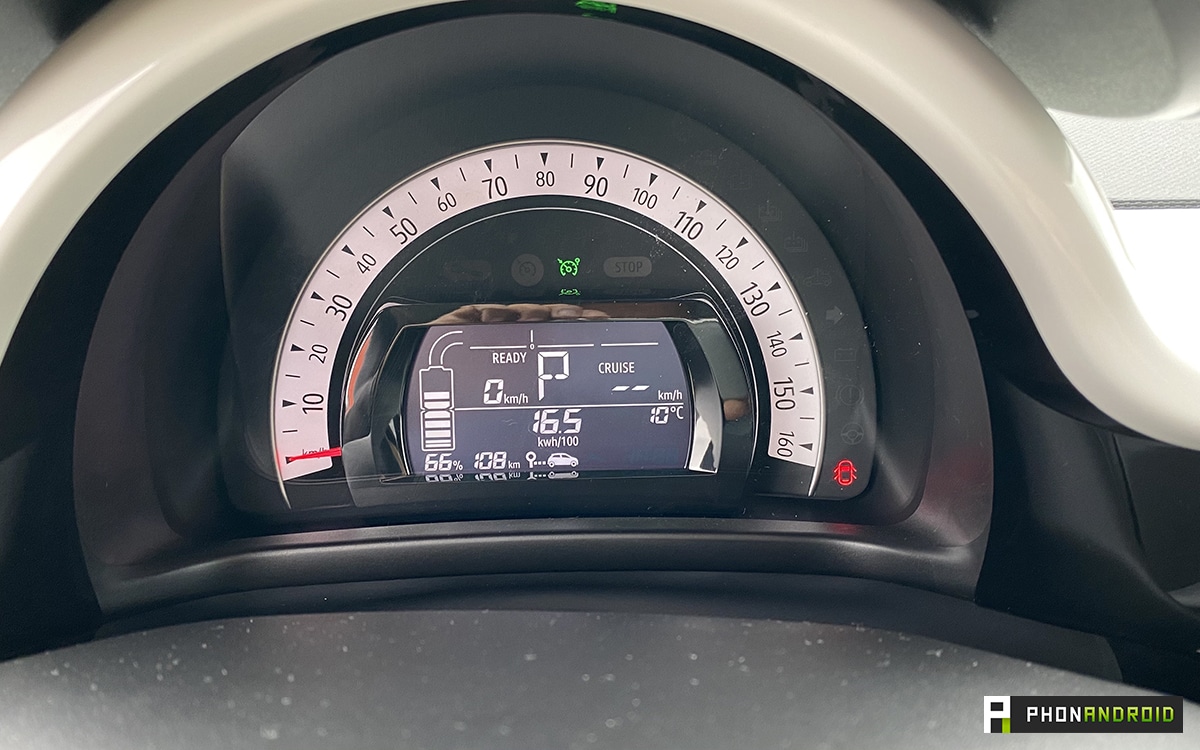 Regarding recharging, the manufacturer announces an hour to fill up with electricity from a 22 kW terminal, the maximum power permitted by the Renault Twingo Electric. Nothing really surprising when we know that 75% of infrastructures deliver power in 18 and 22 kW precisely. Obviously, it is at home that most customers should recharge their Twingo Electric. In this case, you will have to wait 15 hours to recharge the battery from 0 to 80% by plugging the car into a simple household 220 V socket. As a reminder, it delivers a power of 2.4 kW against 3.7 kW for a reinforced grip which allows the car to be recharged in 8 hours. 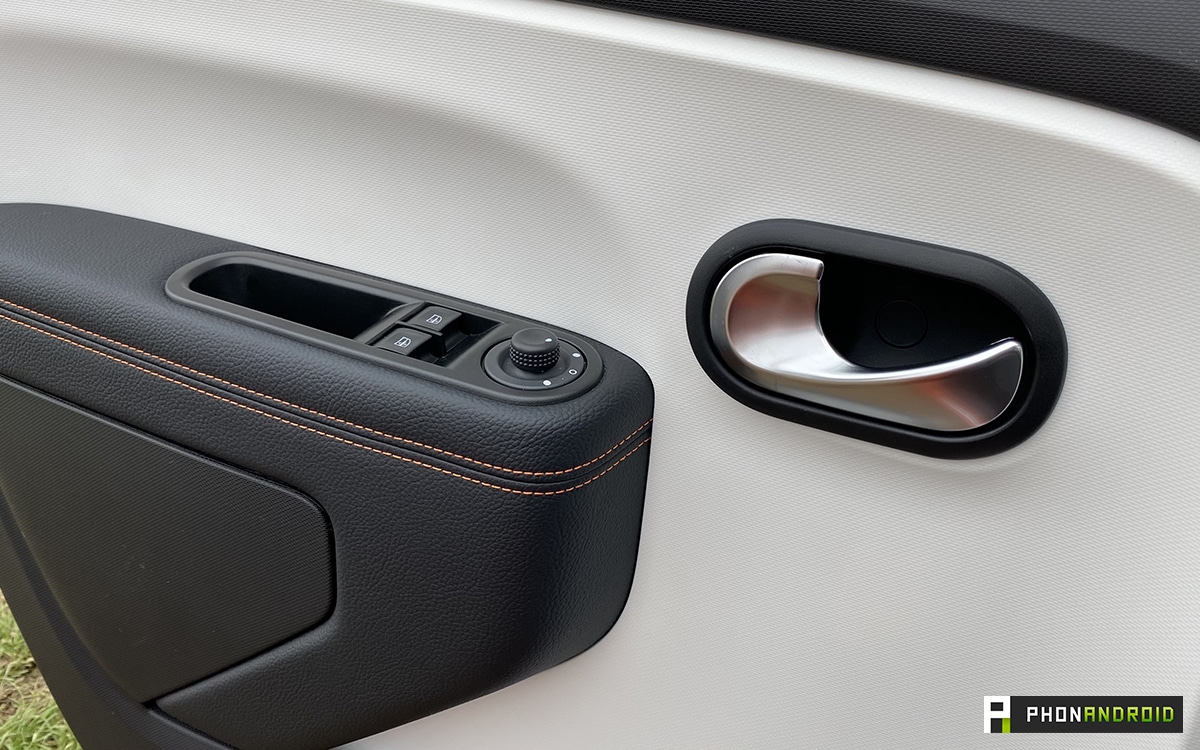 If the Renault Twingo Electric is long overdue, it is because it could well overshadow the Renault Zoe, the manufacturer’s other 100% electric model, which still takes first place in sales of electric cars. Indeed, the newcomer is displayed at a price from 21,350 euros before bonus. We are therefore well below the first speculations which placed the Renault city car at around 25,000 euros, and this is very good news. However, she cannot claim the bonus of 7,000 euros, which is limited to 27% of the displayed price. But the government reduction is still interesting: in the end, it is possible to acquire the Renault Twingo Electric for just under 15,600 euros bonus deducted. 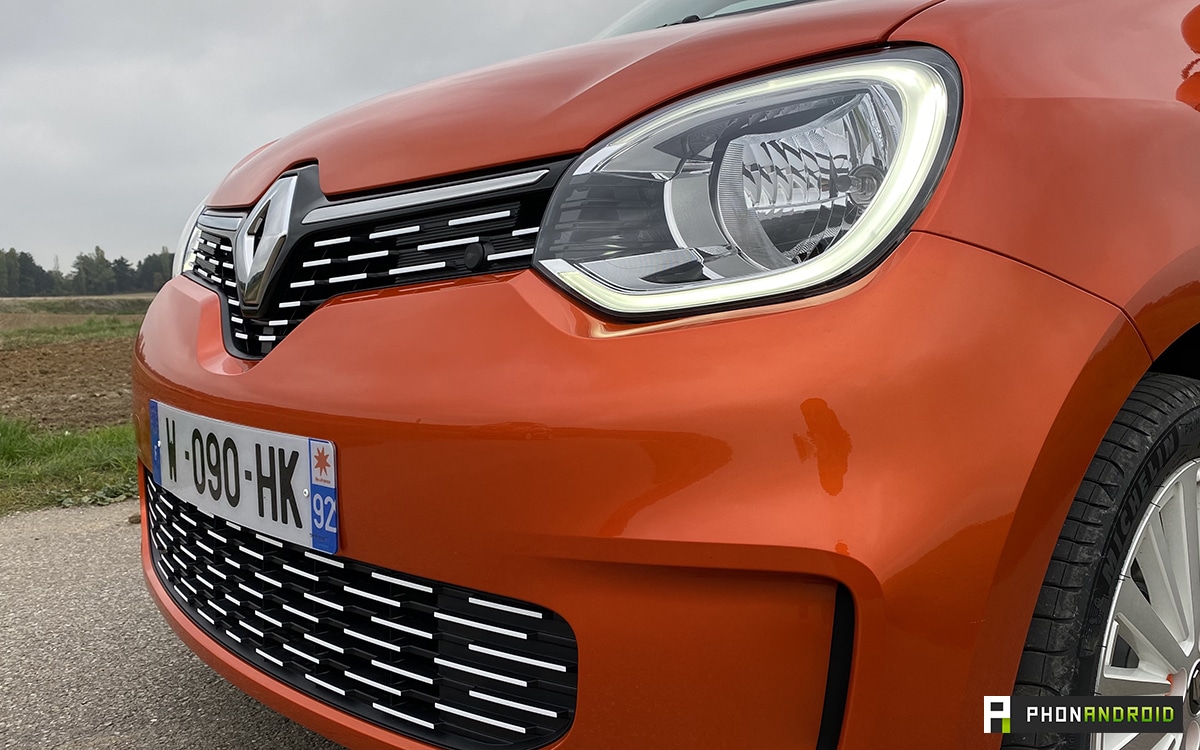 But we must admit that this basic model in Life version comes with the bare minimum. Without air conditioning, you will have practically only four wheels and a steering wheel as some would say. An extension of 1,100 euros (or 16,700 euros for dunces in mathematics) allows access to the Renault Twingo Electric in its Zen version. Otherwise better endowed, it takes advantage of the air conditioner, but also a height adjustable steering wheel and a seven inch touch screen with the Easy Connect system. This allows you to access Android Auto and CarPlay from Apple, but only in wired version. 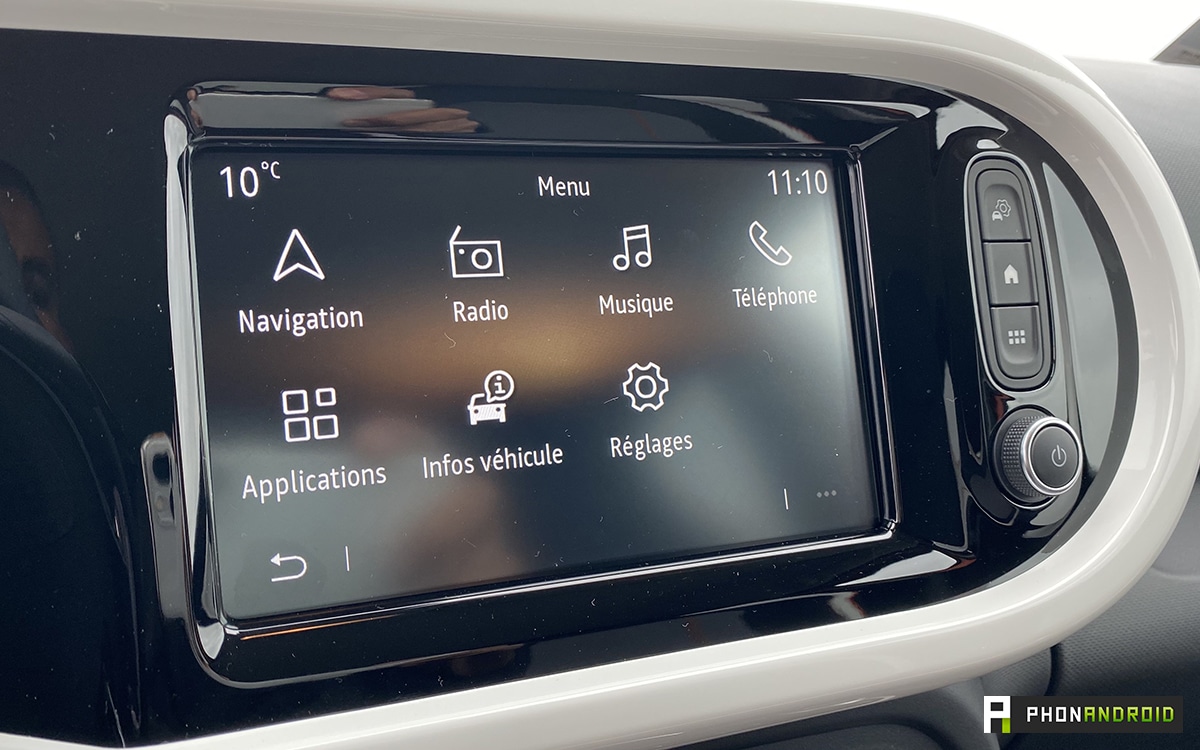 Of course, it is also possible to simply connect your smartphone via Bluetooth to listen to music and make wireless calls. Note that the quality of communications pleasantly surprised us in such a car. We took advantage of our test to call a conferee at the wheel of the same car, and the quality of the microphone allowed us to enjoy perfectly clear sound, unlike our 2016 Clio IV which led us to install an ad hoc system for example. 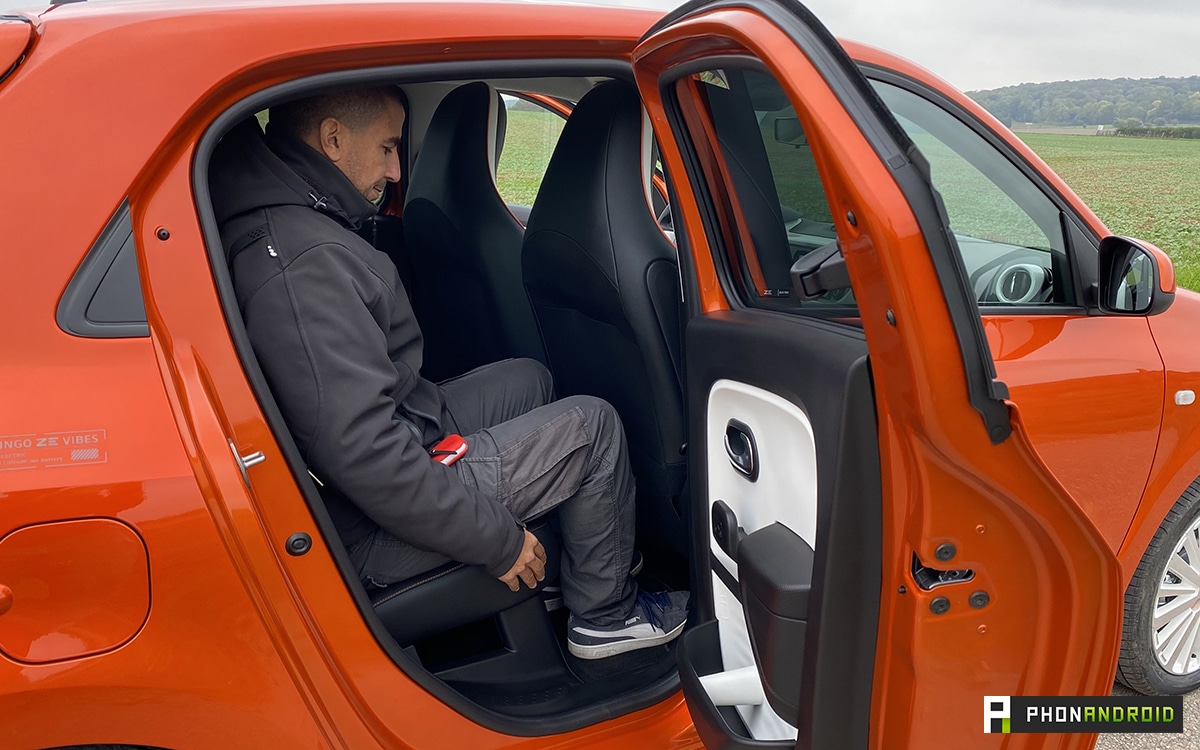 At the top of the range, the Intens version well known at Renault. The touch screen is used here to display the image of the reversing camera. To this are added a rear parking aid system, heated front seats and 15-inch alloy wheels. Regarding the heated seats, be aware that they offer only one power level (moreover very effective). In addition, they automatically deactivate after a few minutes to conserve the car’s battery. Still, this Renault Twingo electric Intens is displayed from 25,450 euros before bonus. 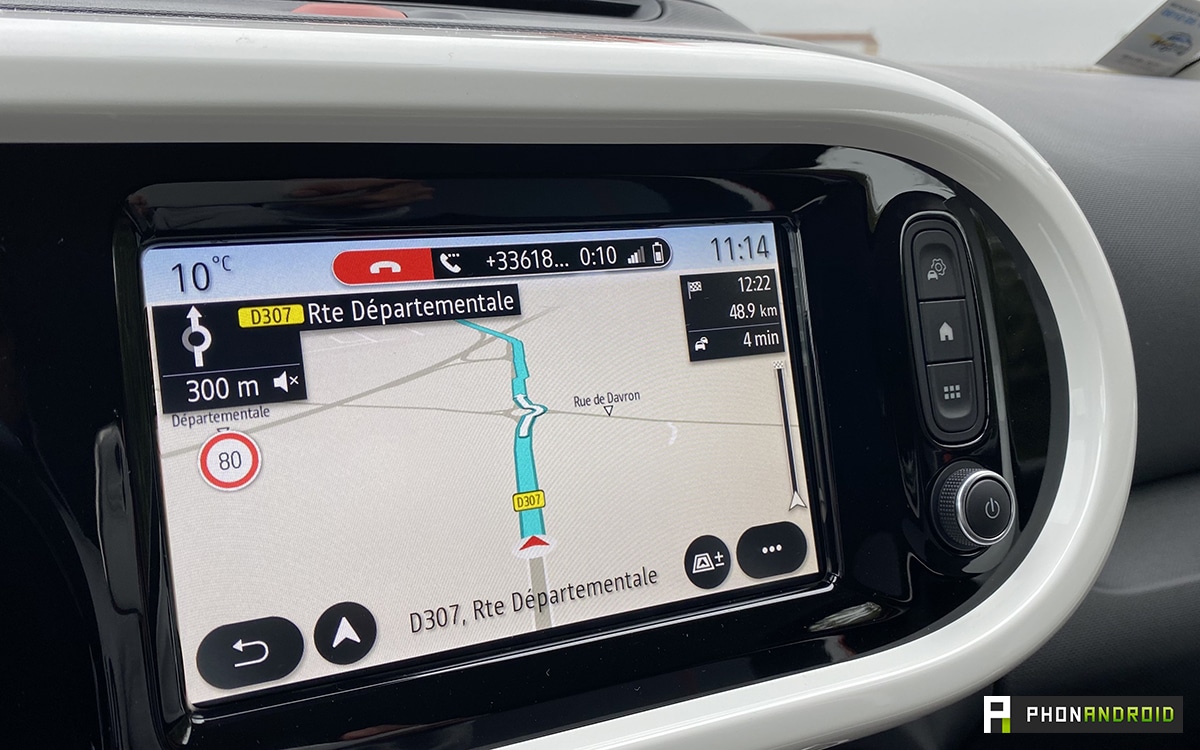 Finally, to be completely complete, a limited edition Vibes launch is also available (26,450 euros before bonus). It incorporates all the elements of the Intens version, not without adding a new “Valencia Orange” paint, specific exterior details, white inserts on the grille and 16-inch “Monega” alloy wheels with white diamonds. This Limited Vibes Series also benefits the new Arkamys audio system which is associated with a subwoofer, and the lane crossing alert. This last feature which just emits an audible warning when you bite the white line is not really of interest to most drivers.

On the other hand, the Arkamys audio system of our test model pleasantly surprised us. As long as you take a little tour of the settings to access the three-band equalizer, it is possible to refine the rendering for a very satisfactory result. However, we should avoid increasing the volume too much. Indeed, the speakers integrated in the doors quickly made vibrate the hard plastics that dress them. 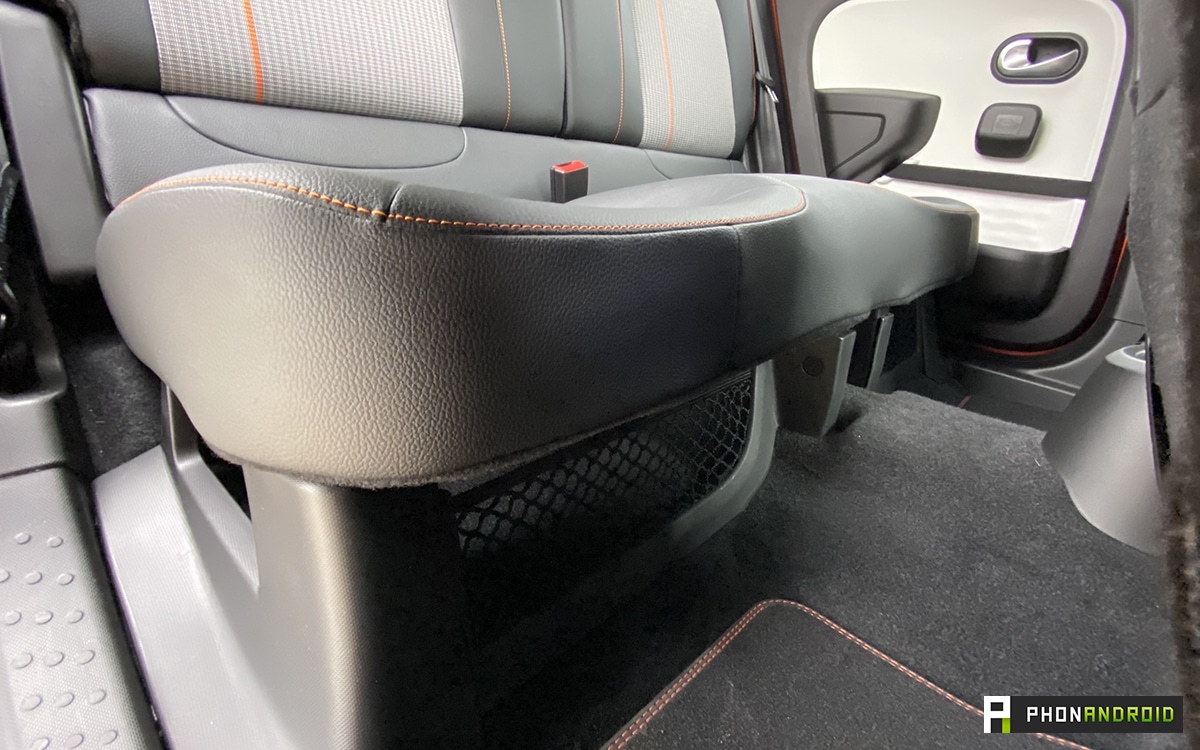 Once behind the wheel, we find ourselves on familiar ground. Instrumentation is provided by a graduated analog speedometer associated with a small touch screen. This indicates the battery charge level in visual and percentage form, the gear engaged, a reminder of the current speed, the cruise control warning light, the temperature and other information (average consumption, remaining autonomy in kilometers, etc.). On the steering wheel are some buttons which are all dedicated to the cruise control which is activated by another button located on the central console. Finally, the radio controls, identical to those of the brand’s other vehicles, are grouped together just below the right comodo behind the steering wheel. 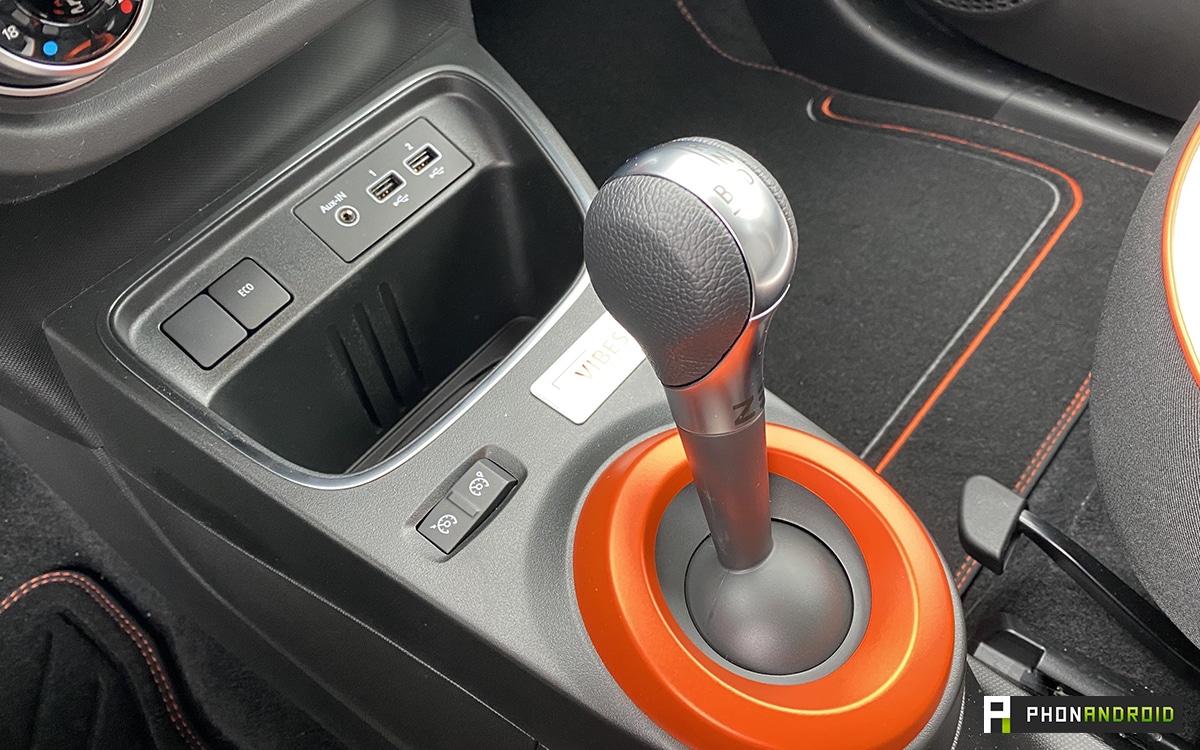 The seven-inch touch screen is very pleasant, helped by a successful interface and above all very clear. No need to dive into the manual to find the function you need and some small details are very well seen. For example, the shutter system displayed at the top of the screen to answer a call without obscuring the GPS. The latter was also very efficient, taking us safely to our destination during our test.

The same goes for the air conditioning control which multiplies the buttons in the digital era, but which is very practical on a daily basis. Finally, two USB type A ports are integrated above the storage compartment in the central console. 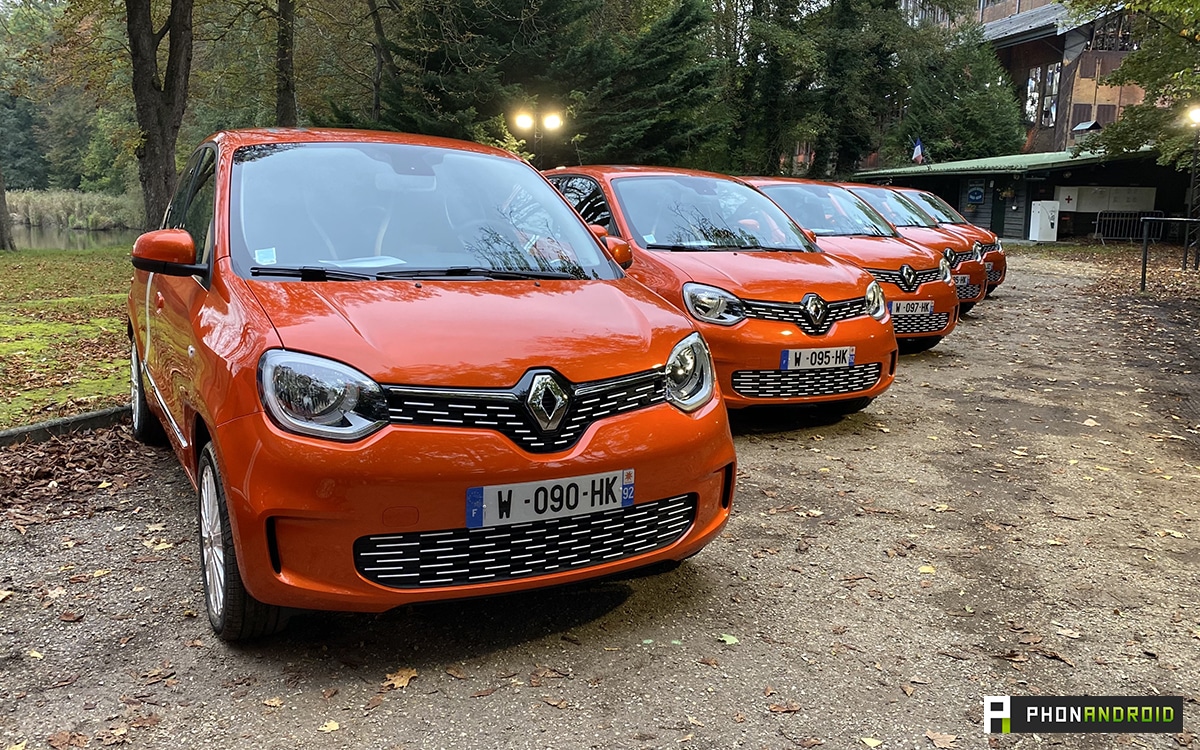 The best of the Twingo?

Once the ignition is on by turning a good old key, the Renault Twingo Electric sets off in silence. The 82 hp well suited to city driving, the small city car easily weaves its way into the flow of traffic with the necessary recovery to fit between two cars. Nothing spoils the feeling of comfort, not even the 16-inch rims of our limited edition Vibes. Better, the Renault Twingo Electric is extremely agile, well helped by its light steering and its weight of 1,111 kg, very little for an electric car. And let’s face it, we are tempted to take a roundabout at high speed, the car is so fun to drive. 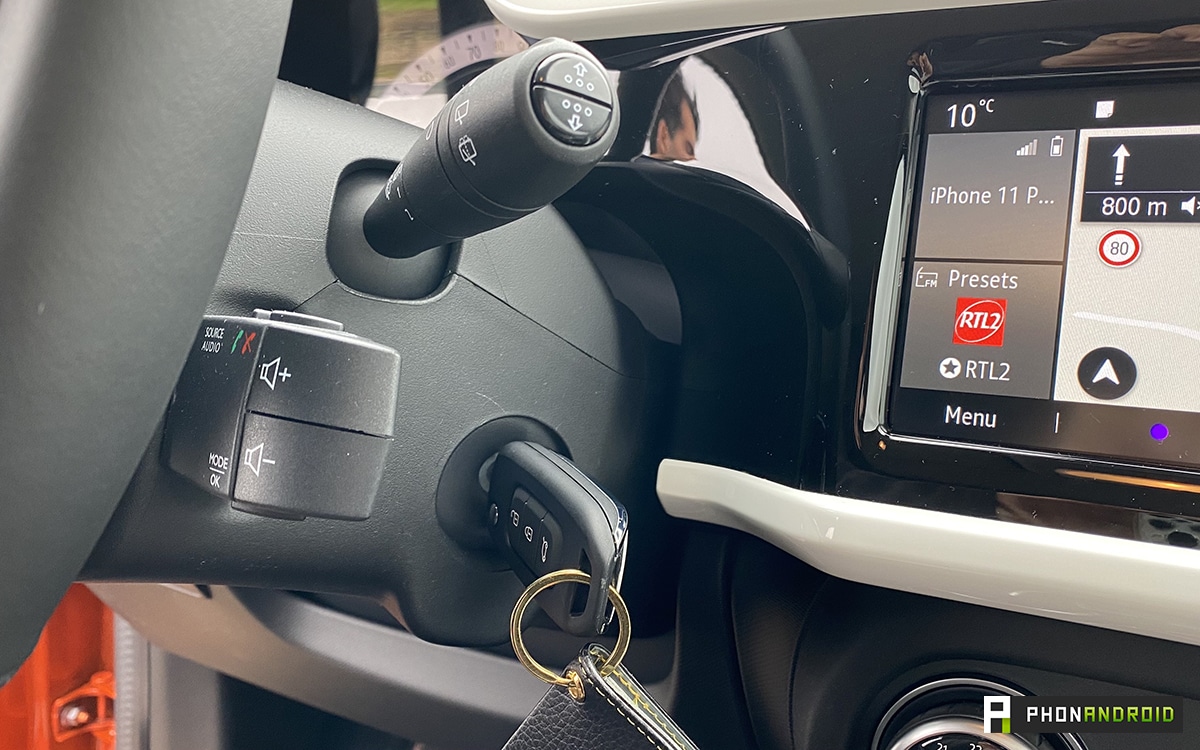 The times remain very satisfactory on the motorway even if it is not the favorite playground of the Renault Twingo Electric. Quiet in town, the car is filled with distinct aerodynamic noises on expressways at more than 110 km / h. In any case, we will avoid spending too much time on the highway at the risk of draining the battery in less than 200 km. 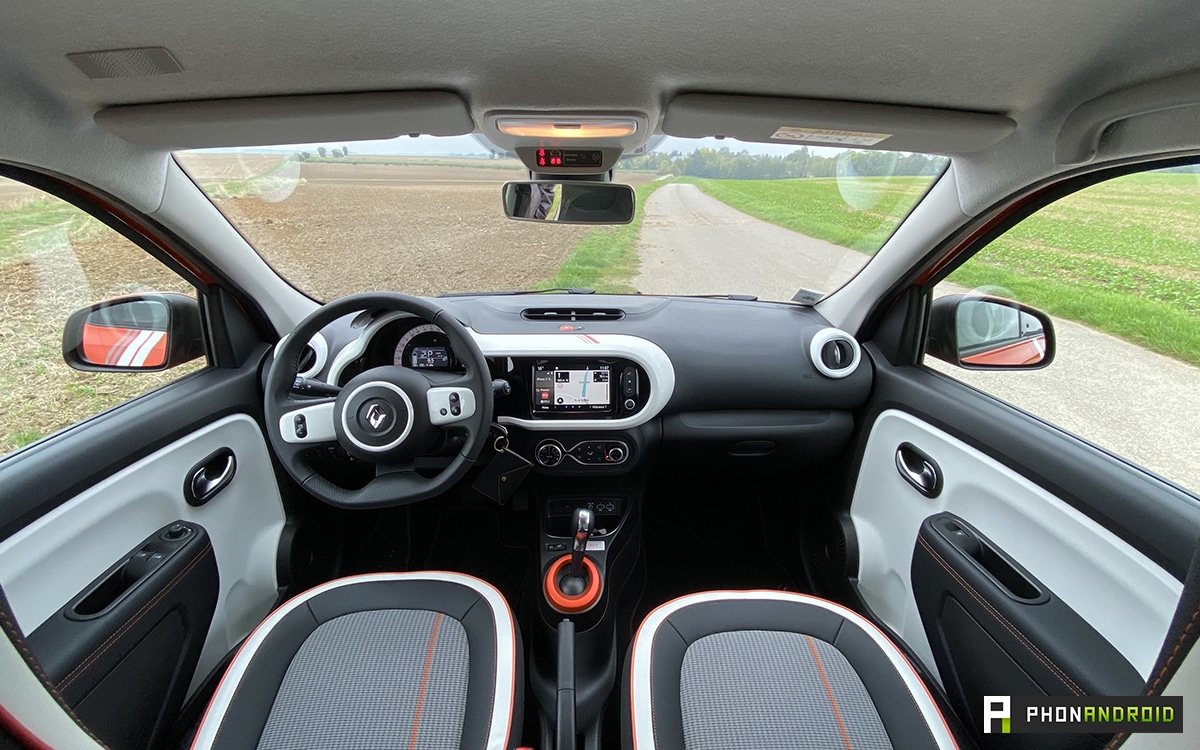