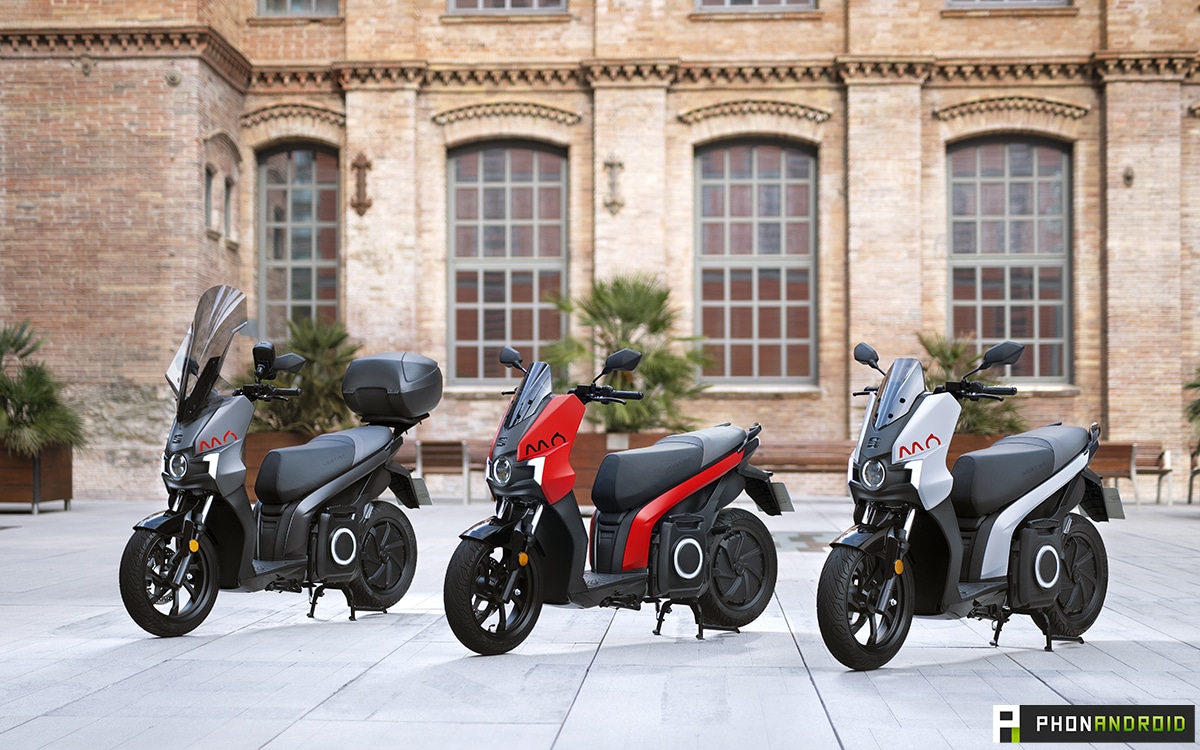 Seat, the famous car manufacturer, knows how to diversify. Proof of this is its new electric scooter, soberly called “Seat MÓ”. We tested it for a long time and give you all our conclusions on the one that has everything to become one of the best models of the year.

As if by opportunism, the Seat MO is launched in France just as the city of Paris announces that the two thermal wheels will have to pay parking fees from next year in the capital. This Iberian electric scooter will be exempt. Designed by the Silence brand and renamed by the car manufacturer Seat, it is a 125cc equivalent. It therefore requires a B permit with a possible 125 certification or an A license to be piloted. We took the handlebars in the streets of Paris.

Announced at the end of 2019 by the car manufacturer Seat, the one originally supposed to be called e-Scooter therefore ultimately bears the name MÓ. Good surprise: it surpasses its original technical sheet to proudly announce 137 kilometers of autonomy instead of the expected 125.

For Seat, complementing the brand’s mobility offer with – in particular – this electric scooter is a natural movement. It must be said that marketing studies are formal: young people spend less on their car license and buyers of new cars are on average 56 years old in Europe. And if it will sell this year less than 45,000 electric scooters 125cc equivalent on the continent. Studies predict nearly 200,000 by 2025. So there is a place to take. But let’s start from the beginning.

Presentation of the Seat MO

Aesthetically, the MÓ is an almost exact copy of the Silence S01. Seat brings its colors and logo to it, but the rest is the same. Entirely manufactured in the Barcelona region, we also find the Silence brand on some parts, such as the removable battery, which we will discuss a little later. The MÓ is offered in white at no extra cost, or red or gray for 75 euros more.

The machine is rather compact (about 2 meters in length, for a wheelbase of 1.43 meters), which clearly locates its urban character. In any case, it does not look at all like a thermal scooter that would have been adapted to the electric. The motor is placed in the rear wheel and the large battery in the central position. The latter is completely removable and, although weighing 40 kilos, the maneuver can be performed without the need for strength training. After pressing a lever, all you have to do is pull it towards you. A pair of retractable rollers then falls out. All you have to do is extract and pull up the handle to end up with a kind of rolling suitcase that anyone can move. It is ideal for charging at home, as long as you have an elevator in the building. It’s also the best possible anti-theft device : without battery, the scooter is totally unusable. Of course, it is also possible to charge the device without removing the battery. 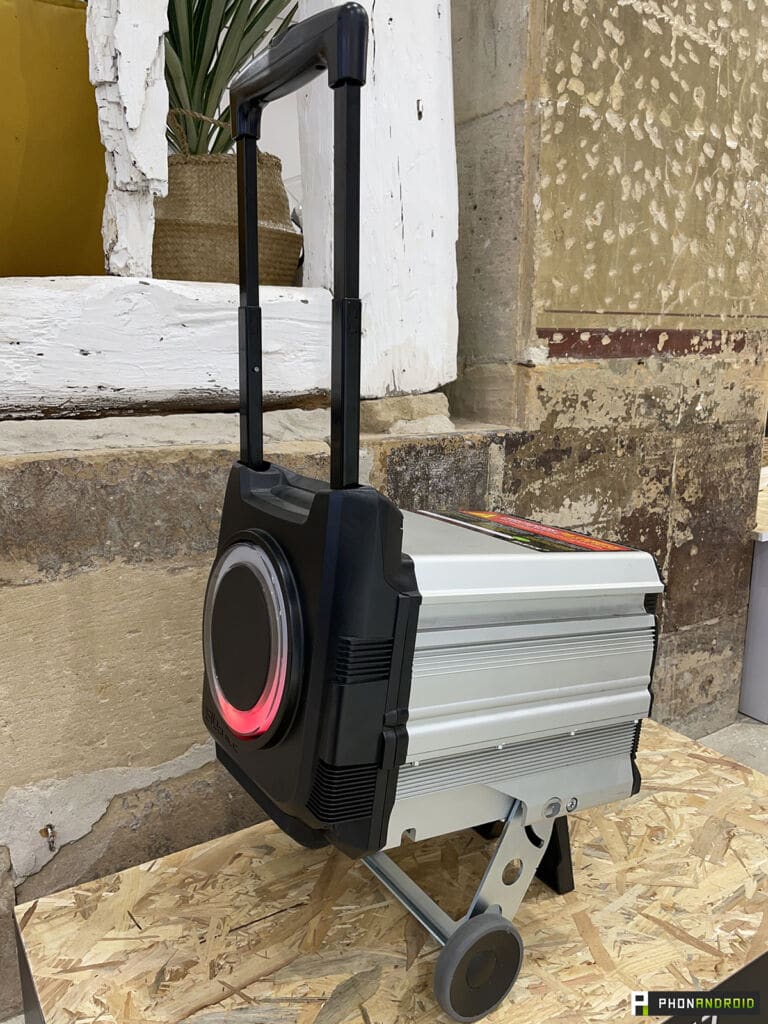 The saddle accommodates easily two people. Positioned high enough (77 centimeters), the smallest riders may have difficulty putting their feet on the ground when stationary, but the driving position however delighted us. Rather upright, the saddle avoids the phenomenon of sagging forward which inevitably leads the rider to pull his seat up towards the center at each red light. There you will remain worthy. 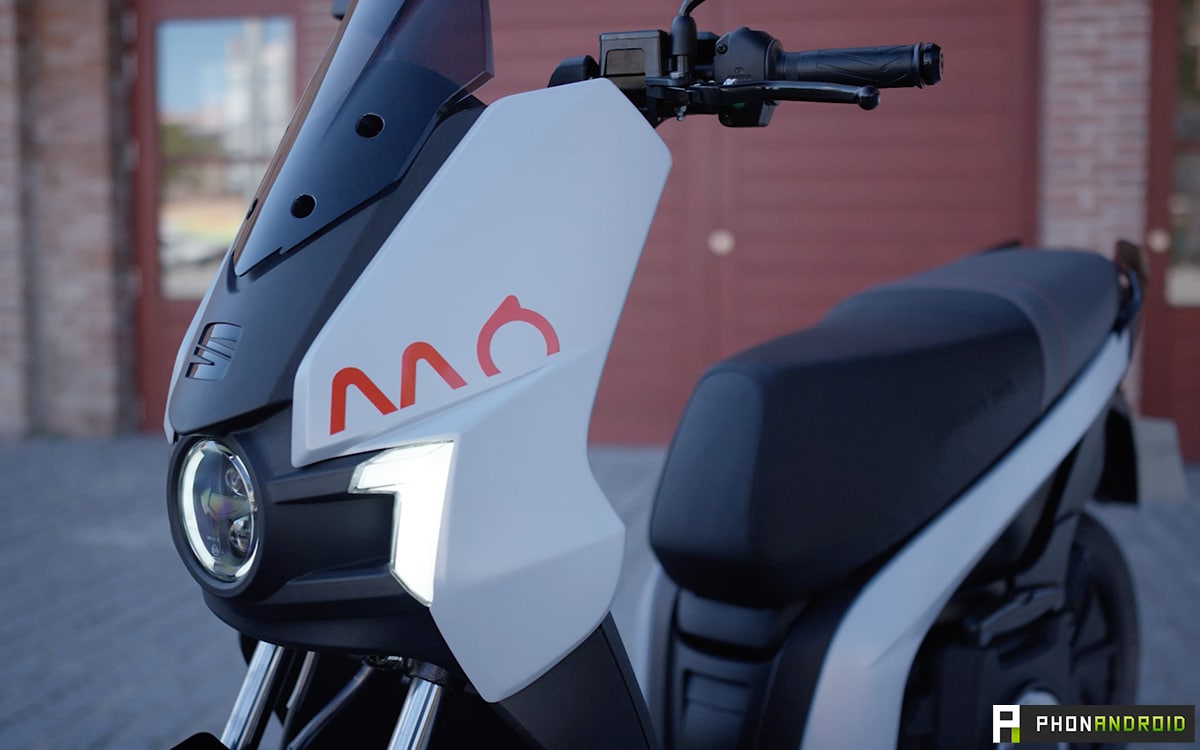 The fairly narrow handlebars facilitate passage through mouse holes. The windshield is rather symbolic, but being a rather urban two-wheeler, it is not prohibitive. A taller windshield is optional where applicable. Between the fork and the saddle, there is a perfectly flat floor which will allow luggage to be transported and which also promotes the saddle, regardless of the type of clothing worn. Under the saddle, and this is a real plus when it comes to a two-wheel battery, we find a box capable of accommodating two helmets, and even some tools or accessories. On the central column, at the front, two USB sockets protected by a cap allow powering or charging of a smartphone, for example. 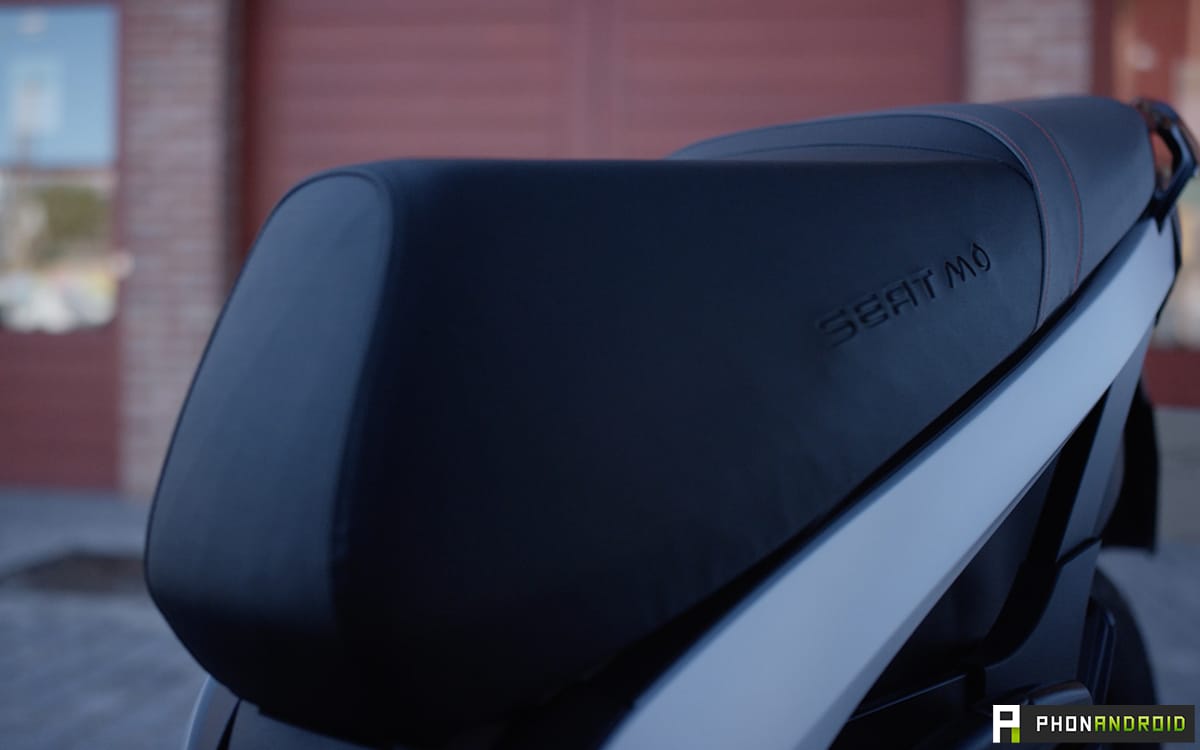 Lighting is provided by LED lights both front and rear. During the day, a daytime running light position saves a little battery. Anything that promotes independence is always a good idea.
Finally, the digital instrument cluster offers a large amount of information. There is roughly the percentage of remaining charge and then, below, the range calculated in one of the three driving modes engaged. To the right of the load are displayed the outside temperature and a clock, then just below this data, the instantaneous speedometer. The latter is a bit small for our taste, we would have preferred it to be swapped with the charge indicator. The last line shows the temperature of the electric motor or the battery. Finally, at the top right, an arcuate gauge provides information on discharging or recharging the battery while driving. In short, it is complete, but not always very readable. 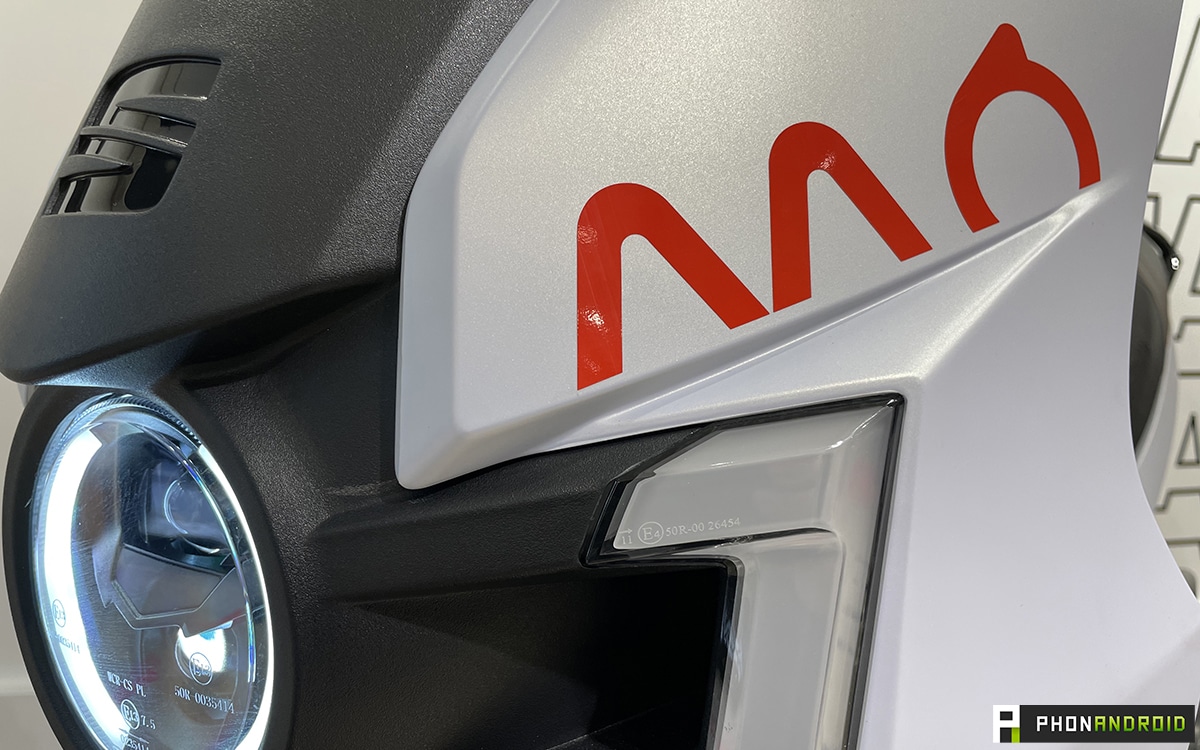 A little bit of technique

The 7 kW motor (a little less than 10 horsepower) is rather generous in power, where many two wheels offer almost half as much. The power can even climb to 9 kW peak (12 ch.). It is powered by the 5.6 kWh of the battery. Again, this is pretty good and we have seen that, even if it is not free in terms of mass, it is not detrimental to practicality. Located very low, motors and batteries help lower the center of gravity and therefore promote the maneuverability of the machine. The battery recharges directly from an AC outlet. Its built-in 600 watt charger allows a full charge overnight. The battery is also recharged in the deceleration and braking phases, with more or less force depending on the driving mode engaged. 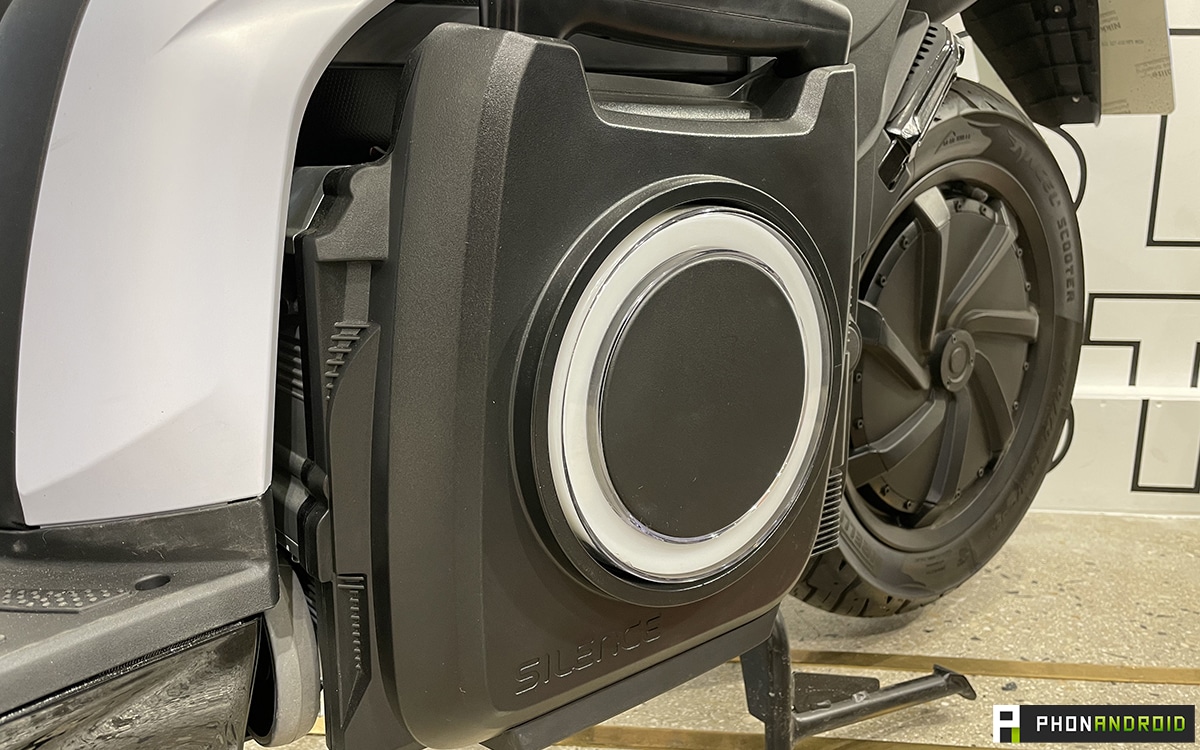 To turn on, simply apply the brake and press the mode selector. A Ready message on the instrument panel then indicates that you are ready to drive. The scooter is as easy to get off its center stand as it is to install it, which may reassure users for whom this is a concern. In addition, to maneuver when stationary, reverse gear can be engaged by pressing a button on the left handle. It works like the push mode of an electric mountain bike: as long as the button is pressed, the motor is engaged and it stops as soon as it is released. 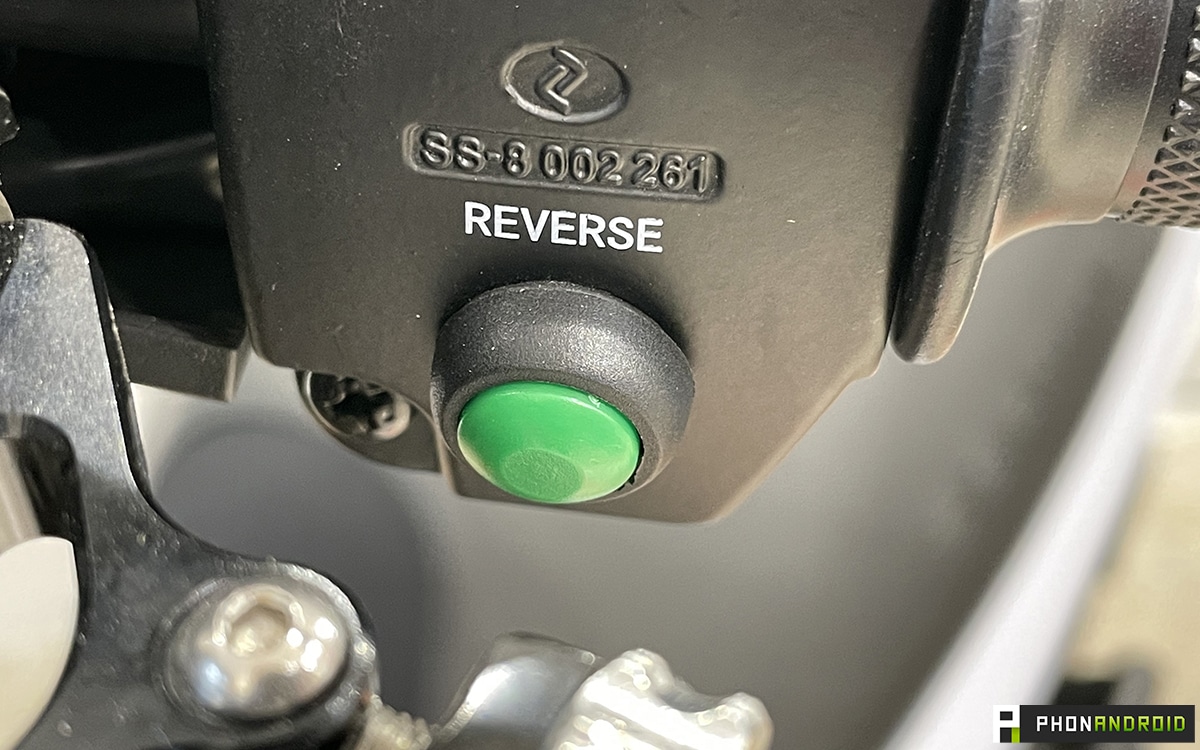 Once on the way, you immediately feel at ease in the Seat MÓ. Its compact size and agility are no strangers to it. In evolution, the pilot has three driving modes: Eco, City and Sport. The first is the one which gives the best autonomy, in particular by limiting the maximum speed to around 70 km / h and by lowering the torque. It is in fact very relevant in the city since despite these bridles, he remains lively and torquey. The following two modes show their differences above all on regenerative power (maximum in sport mode) than on acceleration, where the differences are not obvious. Top speed (100 km / h count, or around 95 km / h actual) is easily achieved in Sport mode. 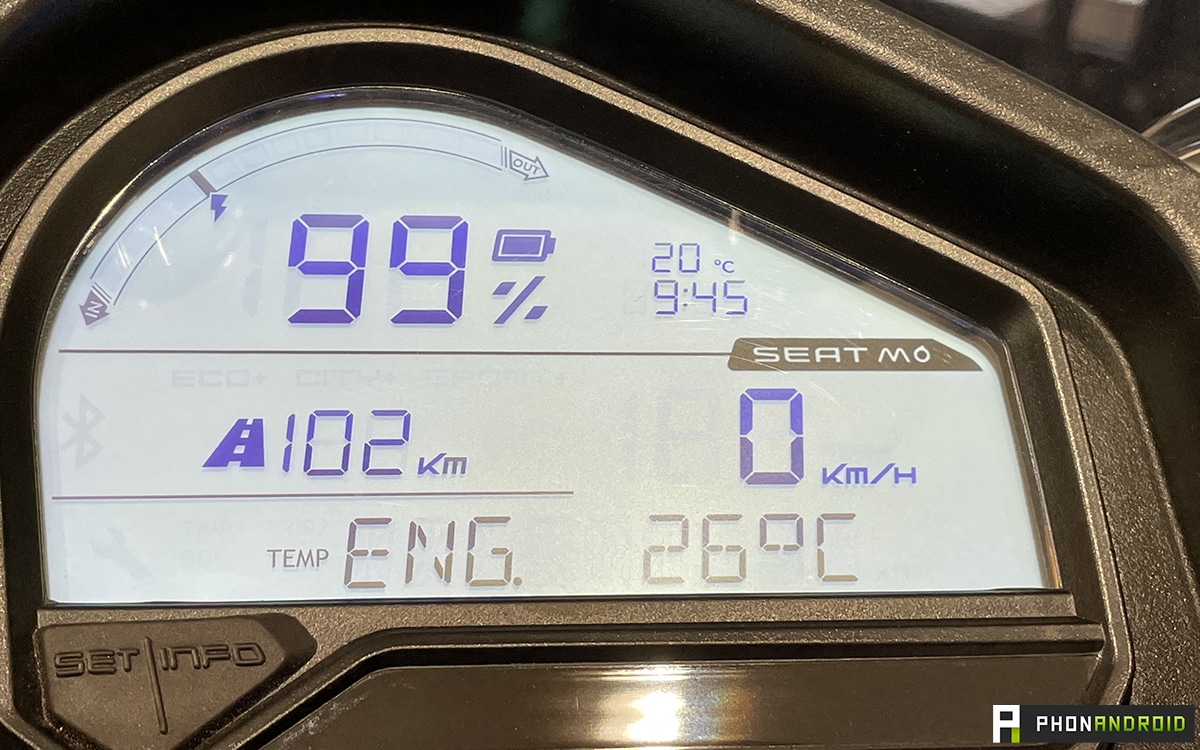 The MÓ is very comfortable on smooth pavement. On the cobblestones or in the passage of abundant potholes of the Parisian roadway, the lifts in the arms are however quite important. Anyway, maneuverability is the strong point of this scooter : whether at low or high speed, it is always very easy to control. The generous dimensions of the rims also help a lot (15 inches at the front, 14 inches at the rear). 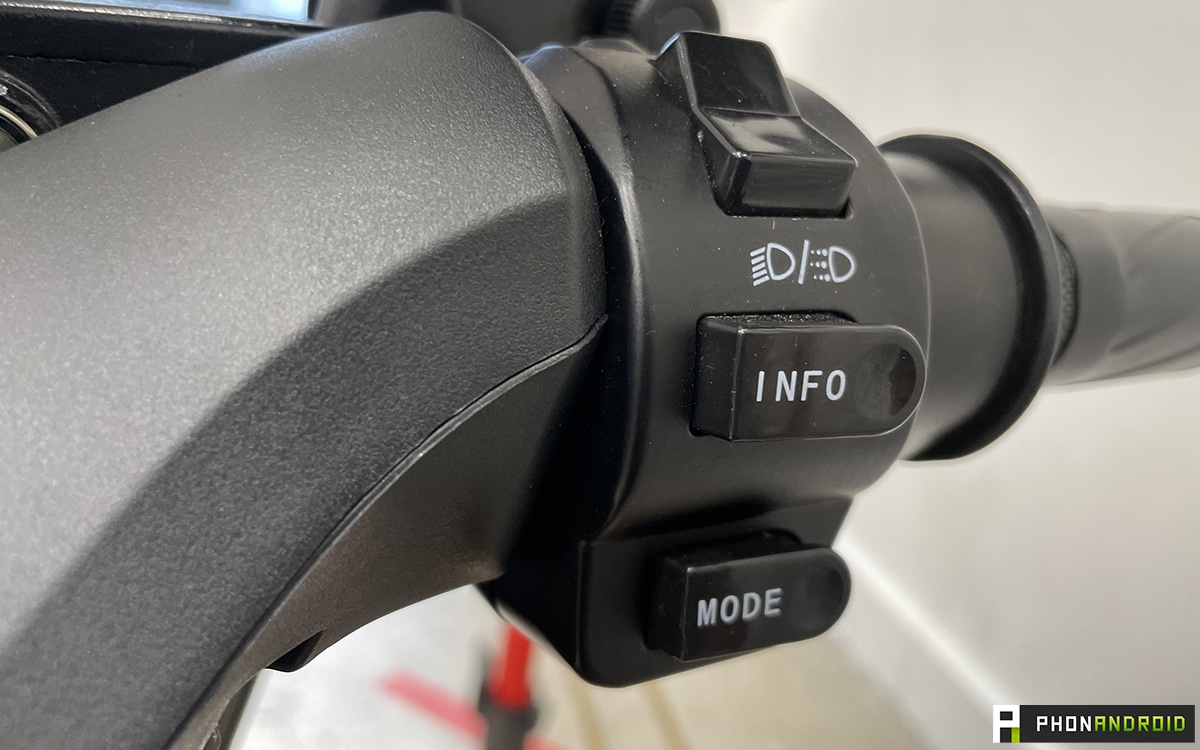 Finally, in terms of braking, Seat unfortunately bypassed ABS, to prefer a CBD. This system does not prevent the wheels from locking, but, on the other hand, distributes the power over the two discs (260 mm at the front, 240 mm at the rear) if one chooses to apply the brake of the straight handle. On the left handle, it is quite normally the rear brake alone that acts. Finally, by anticipating traffic flows, we can also let the generator slow down and thus maximize your autonomy. The latter is the Seat’s other strong point. Data for 137 km maximum (WLTP protocol), it leaves room for the purely urban user, without preventing him from considering a race far from his pit. During our test combining the city and faster suburban roads, we noted an average battery consumption of 1% per kilometer traveled. The technical sheet therefore seems largely achievable. 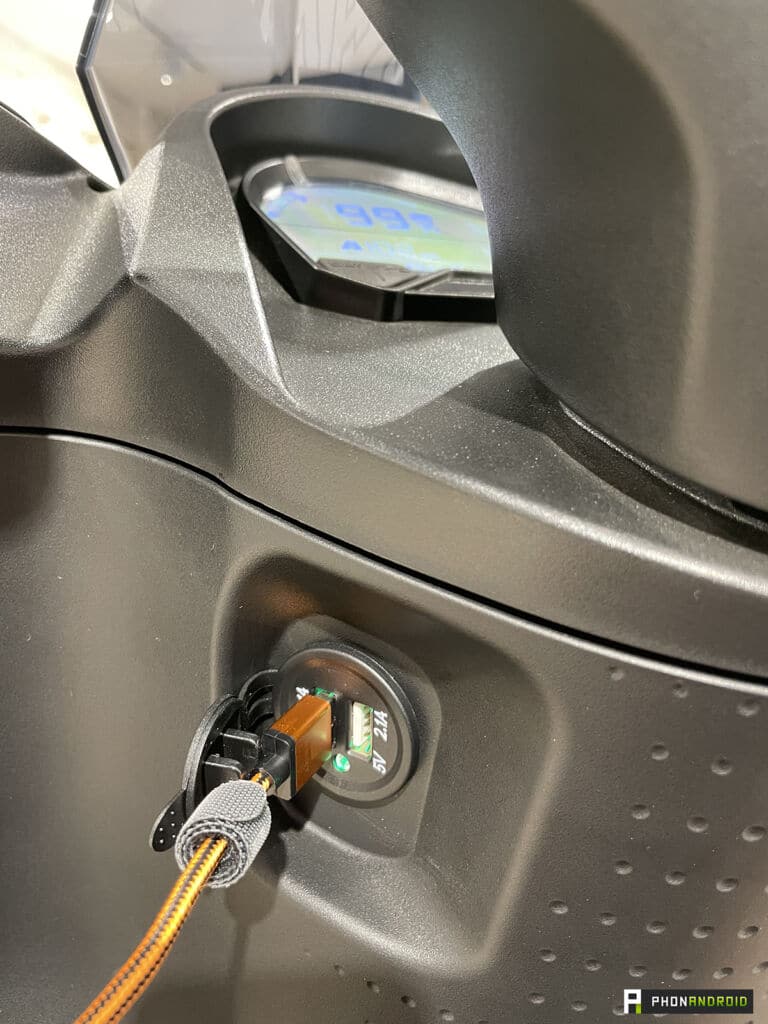 Finally, like any good electric vehicle that should, Seat offers a smartphone application which allows you to manage various functions remotely, including the state of charge or the location of the scooter. Unfortunately, this was not yet available during our trial, so we will only be able to report its existence, but not its practicality. 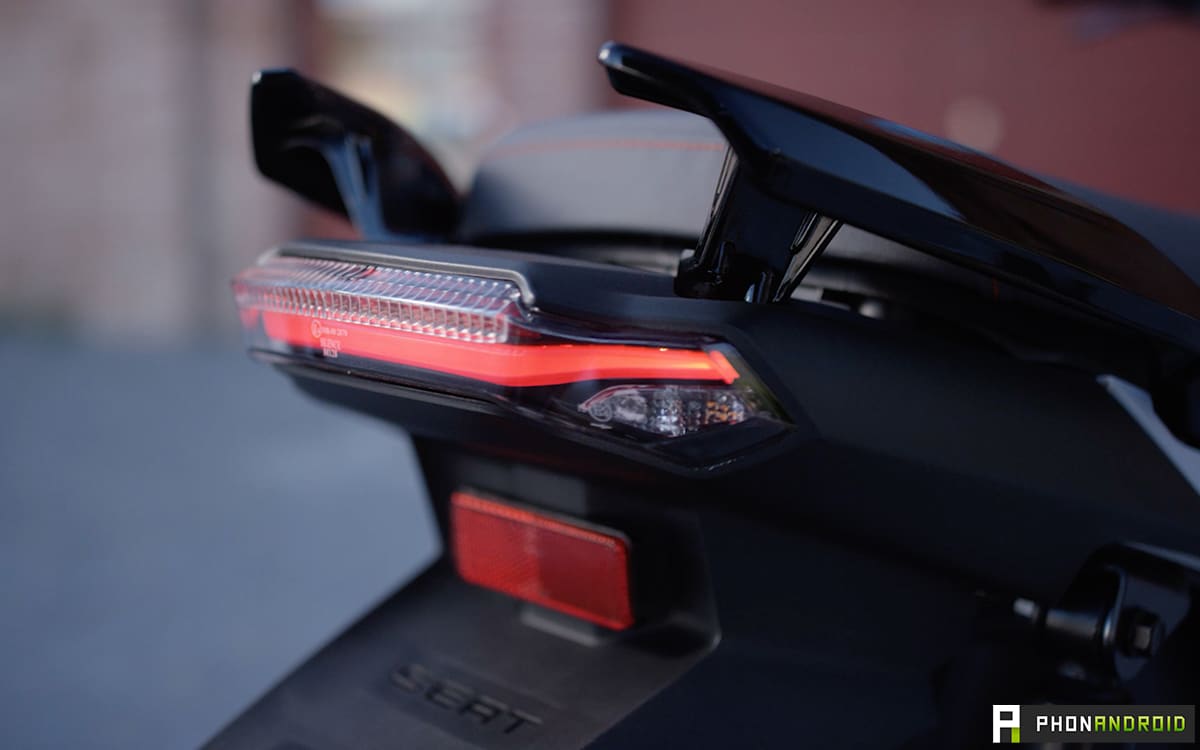 Electric scooters have never been very cheap. Some, like the BMW C Evolution, even had prohibitive prices. Others, like the RedE 2 GO, announce a price of attack gun, but which can double with the endowment in battery, synonymous with good autonomy. At 6,700 euros excluding bonus (900 euros to be deducted), the Seat MÓ is certainly not cheap, but its price remains reasonable with regard to the performance of the machine. With a real range of action, an undeniable practicality of use with its large removable battery, a good carrying capacity under the saddle and in the driver’s feet (it is obviously possible to add a top case of 39 liters if necessary), the MÓ is a coherent urban machine for those who need to move often and over long distances. 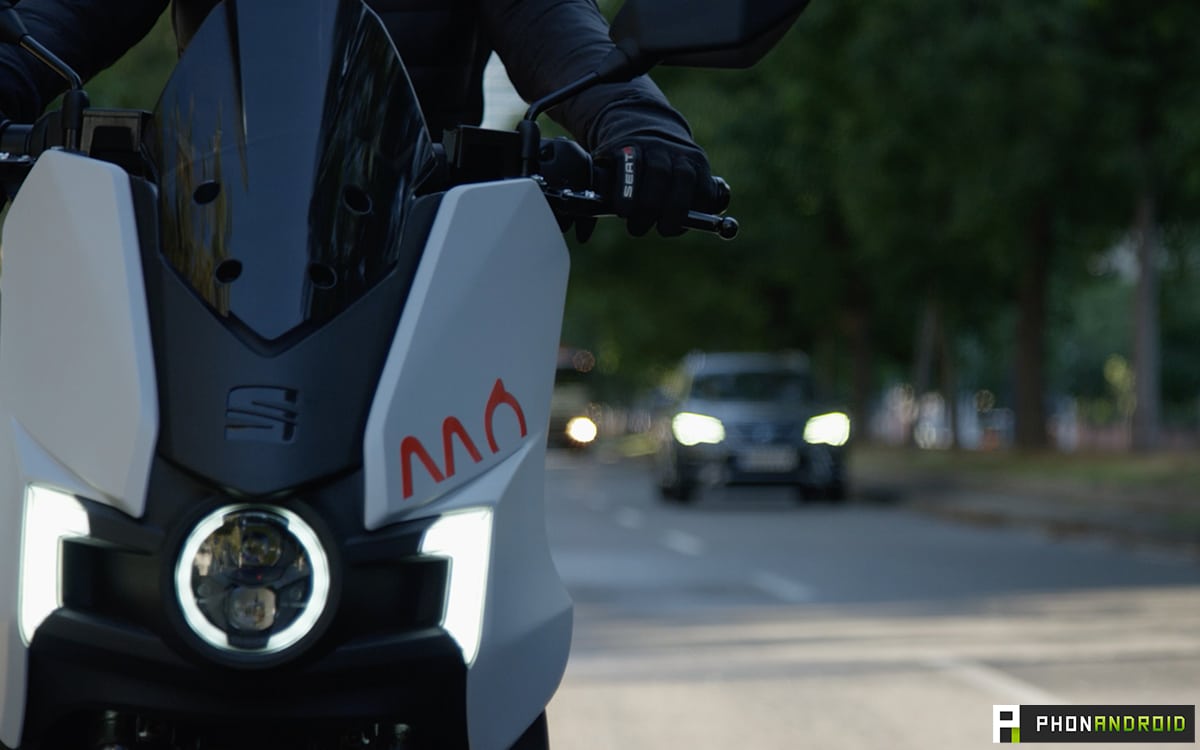 The question of the price of parking now also arises for motorized two-wheelers, which only makes the choice of an electric scooter of this type more relevant. Indeed, parking on the surface with a two-wheeler in the capital from 2022 could cost up to a little over 1,000 euros per year. The first customers will also benefit from an endowment of 300 euros of equipment consisting of a full face helmet, a pair of summer gloves and a smartphone holder.

If you prefer to opt for an LOA, Seat offers a formula from 125 euros per month without contribution (this is taken from the ecological bonus), over 37 months and maintenance included. 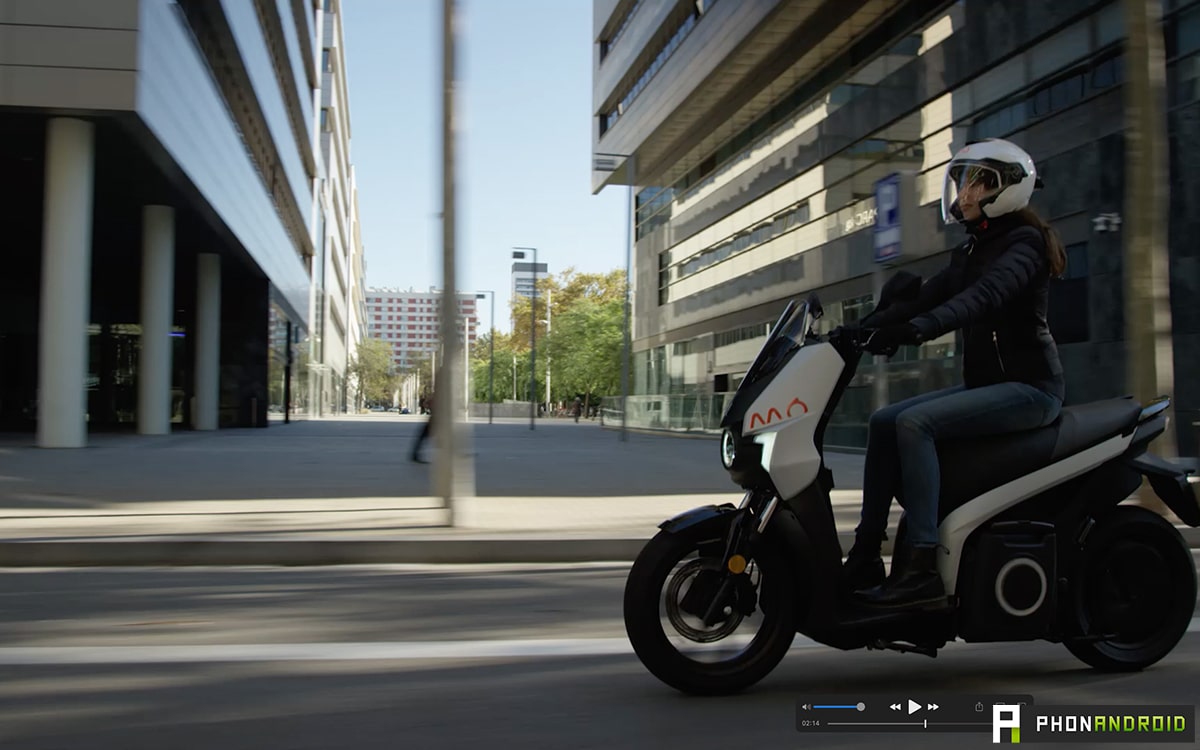