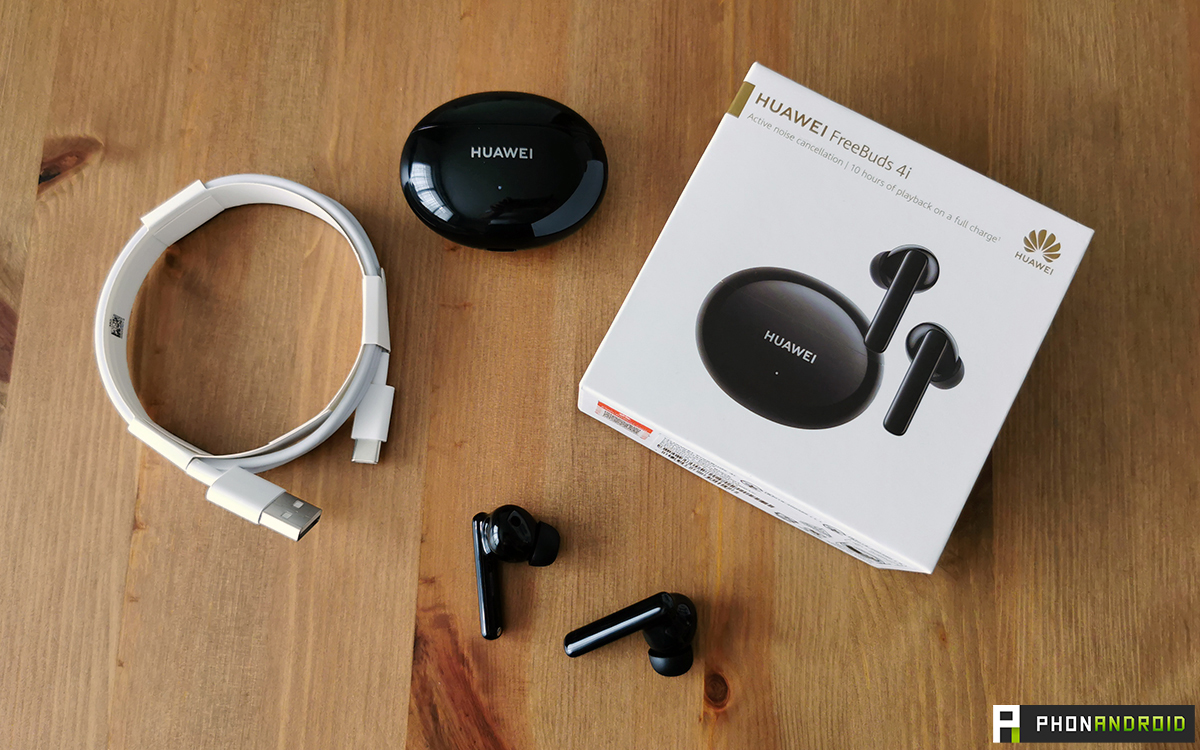 Displayed less than one hundred euros, or even less than 80 euros by searching a little on the Web, Huawei’s Freebuds 4i are intended as a variation of the Freebuds Pro released at the end of 2020. Offering noise reduction and an autonomy of more than 10 hours (without counting the charging case), they really have it all. We have tested them and give you all our conclusions. So, do we fall for the Freebuds 4i or not?

The Huawei Freebuds 4i are out. After Freebuds 3i which struggled to convince at 100%, and Freedbuds Pro much more successful (but also significantly more expensive), Huawei comes back with a new iteration of its affordable headphones. Less expensive than the Freebuds Pro released a few months ago, they nevertheless include certain elements. We tested them for quite a while, and give you all our impressions and conclusions on Huawei’s new truewireless headphones. And you asked us loudly: we promise, this test is 100% certified “without comparison with Apple’s Airpods”. 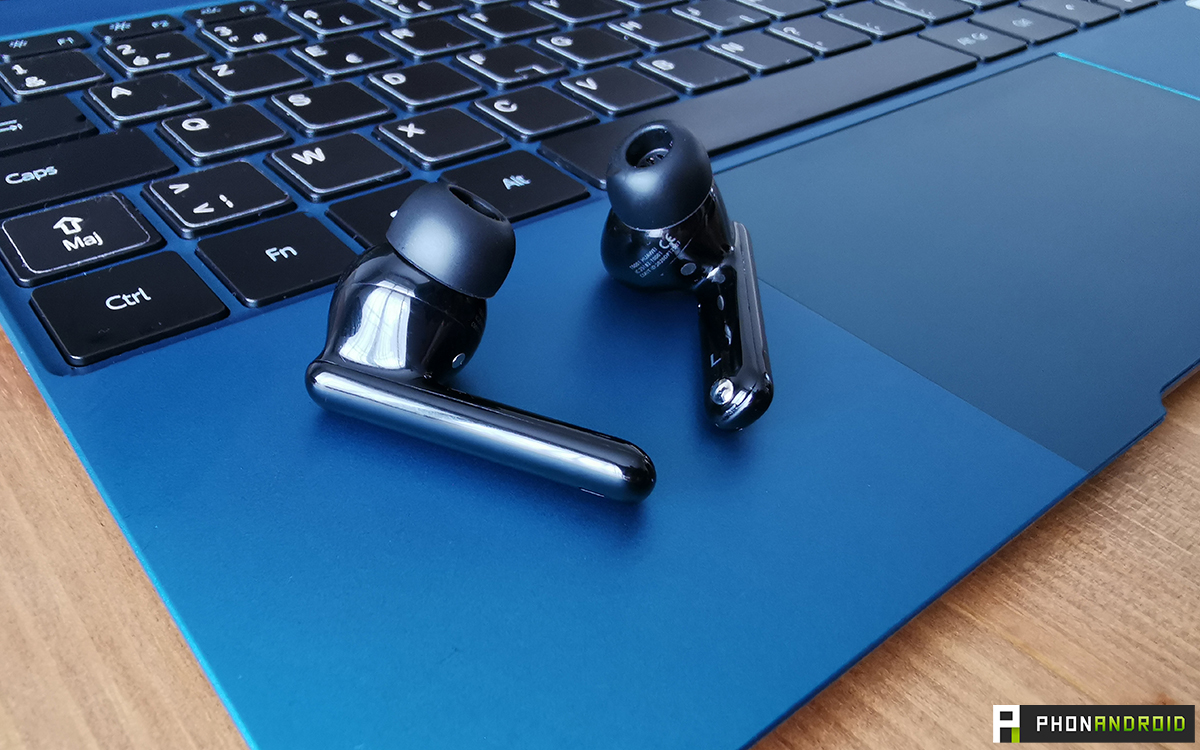 Price and availability of Huawei Freebuds 4i

The Freebuds 4i earphones are available now at a price of € 99.99. The first weeks after their launch, Huawei even offered € 20 off. This promotion having ended, the headphones have regained their original price… Or almost! Because by looking for a few seconds on the Web, it is possible to find them at 79.99 €. Which makes it one of the cheapest wireless models on the market. In addition, the Freebuds 4i are also available as a pack: for an additional € 9.99, Huawei offers a Scale3 connected scale, while for € 19.99 more, we take advantage of the Band 4 Pro.

The manufacturer offers its headphones in three colors: White, black or red. The charging box delivered with the headphones is also suitable for each of these colors. 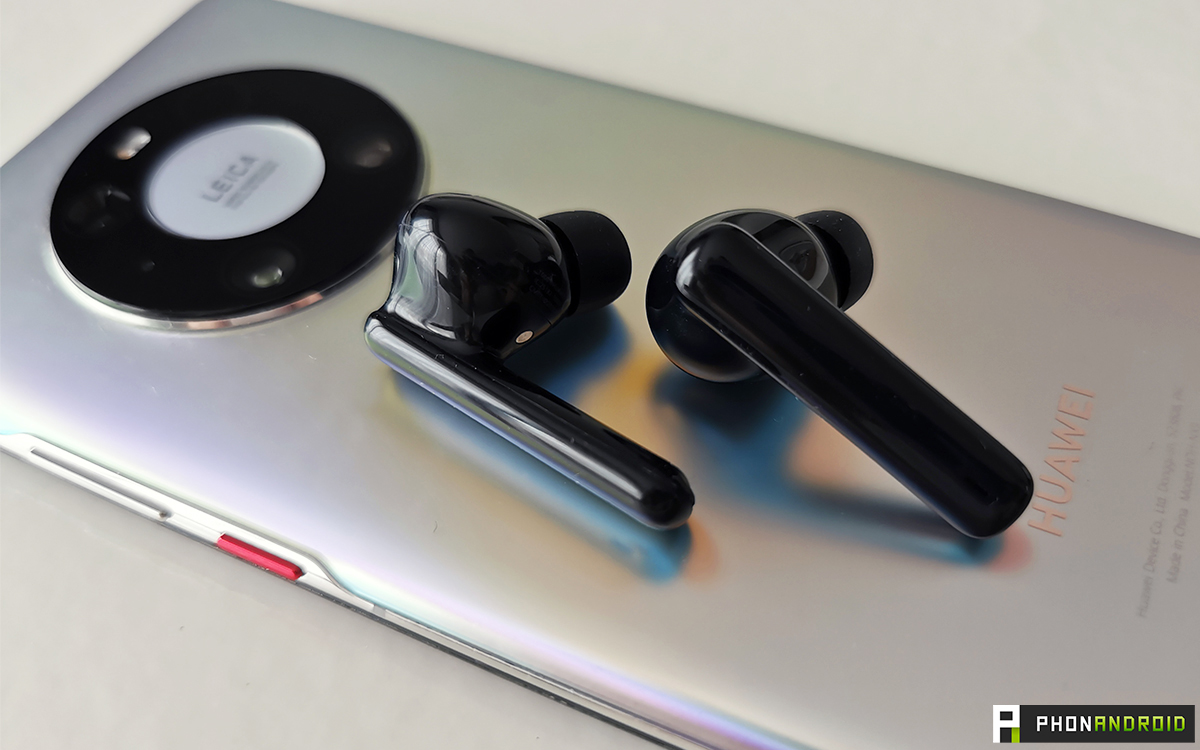 Technical sheet of Huawei Freebuds 4i

The Freebuds 4i consist of a more or less circular tip (the part that you insert into the ear) and a small plastic rod 3.6 cm high (the part that goes down along your ear, therefore). The design of these headphones being very sober, they will be able to be discreet in all circumstances. As you can judge from our photos, we received the black version of the headphones. And as you can see, Huawei has opted for a brilliant shade that looks great, but is not immune to small specks of dust. And again: for the purposes of our photos, we had to clean each photo to reduce dust grains, when the headphones had just been cleaned with an anti-static wipe. 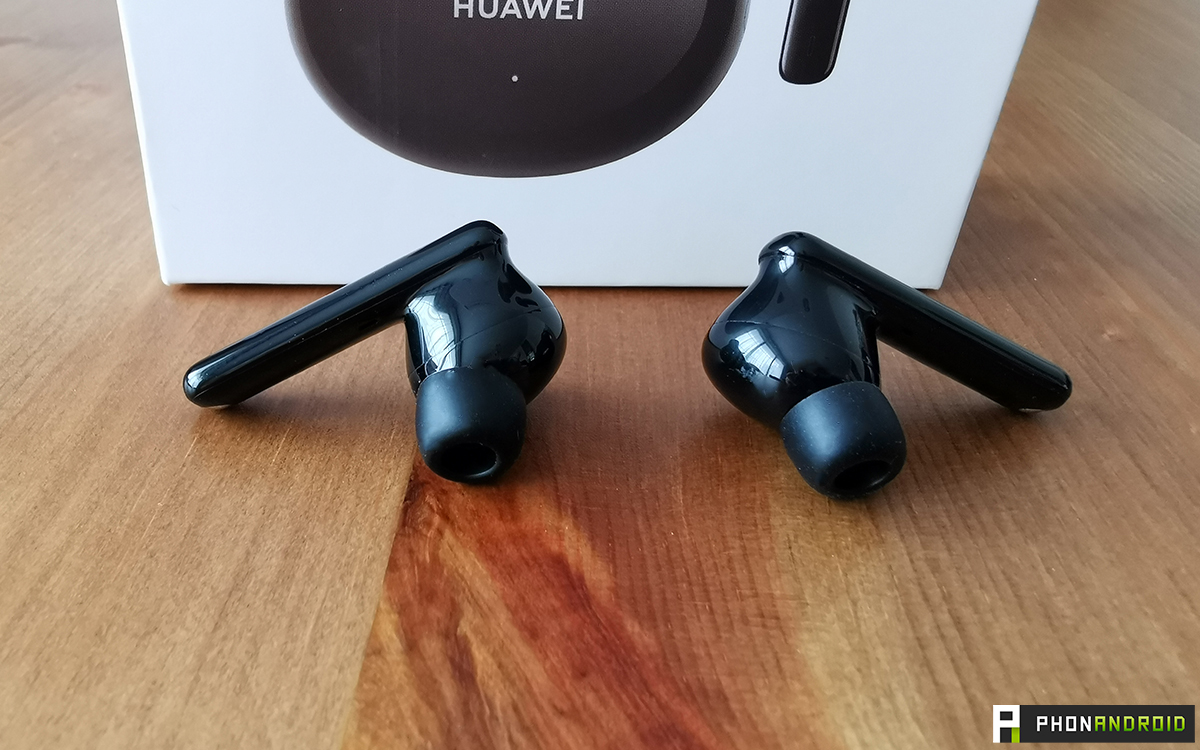 Coming out of the charging case, the first observation: the manufacturer has rolled up its sleeves and looked at one of the main flaws of the Freebuds Pro. Although it may seem like a detail, the Pro suffered from a grip problem. The shape of the case and its strong magnetism made it not always easy to take the headphones out of their housing, even after a good workout. With the Freebuds 4i, we hardly encounter this problem anymore. Certainly, the magnetism that allows them to be kept in the box remains strong. You can turn it over, shake it all over the place, the headphones will never fall. On the other hand, their position in the housing allows them to be taken out of their housing much more quickly. 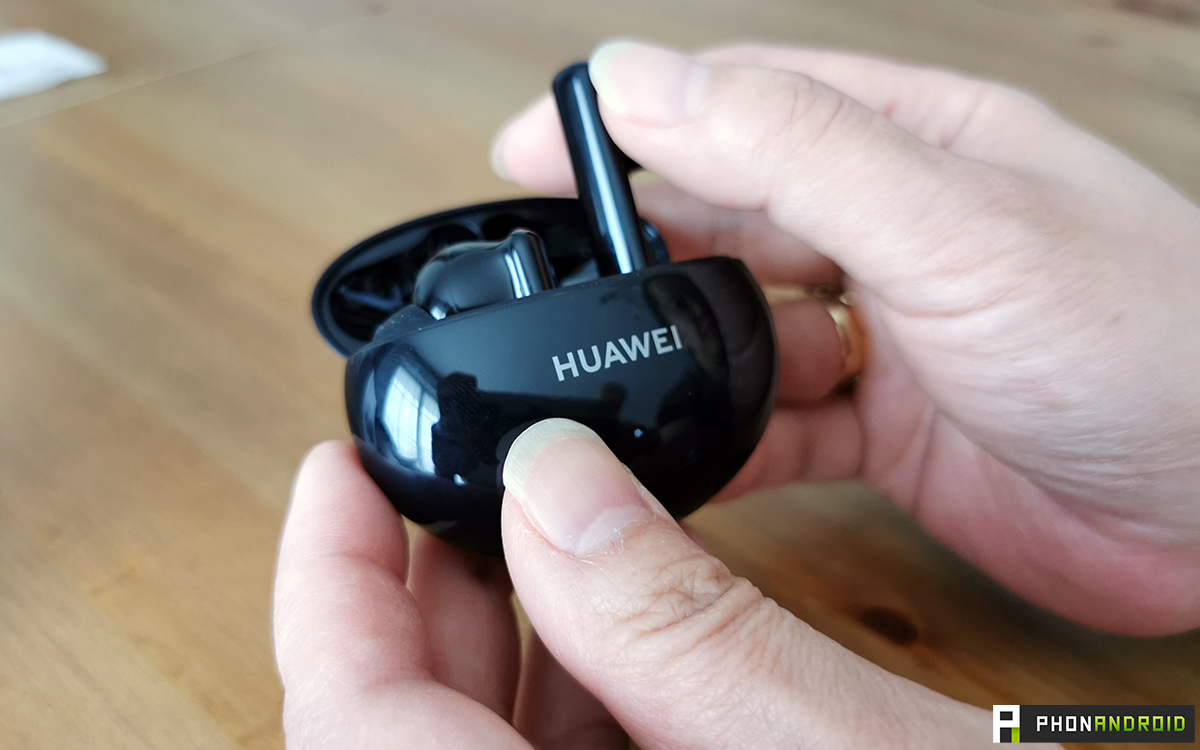 The headphones come with 3 tip sizes, as is customary for this type of accessory in this price range. Once inserted into the ear, the headphones hold securely in place and are unmistakably comfortable, even over time. We come to forget them completely, even though we have used them on several occasions, more than 5 hours in a row, without ever having left them.

A sound reproduction of good quality

Bluetooth 5.2 compatible, the headphones can only be connected to one device at a time. However, you can only use one of the two headphones at a time. The Freebuds 4i can therefore work independently of each other: if you remove the left or right earbud from your ear, the other will continue to work. And if you remove both, the sound of the headphones cuts off instantly, to switch back to the output of the smartphone or the PC. Finally, placing them back in the ear allows the music to be automatically replayed through the headphones. 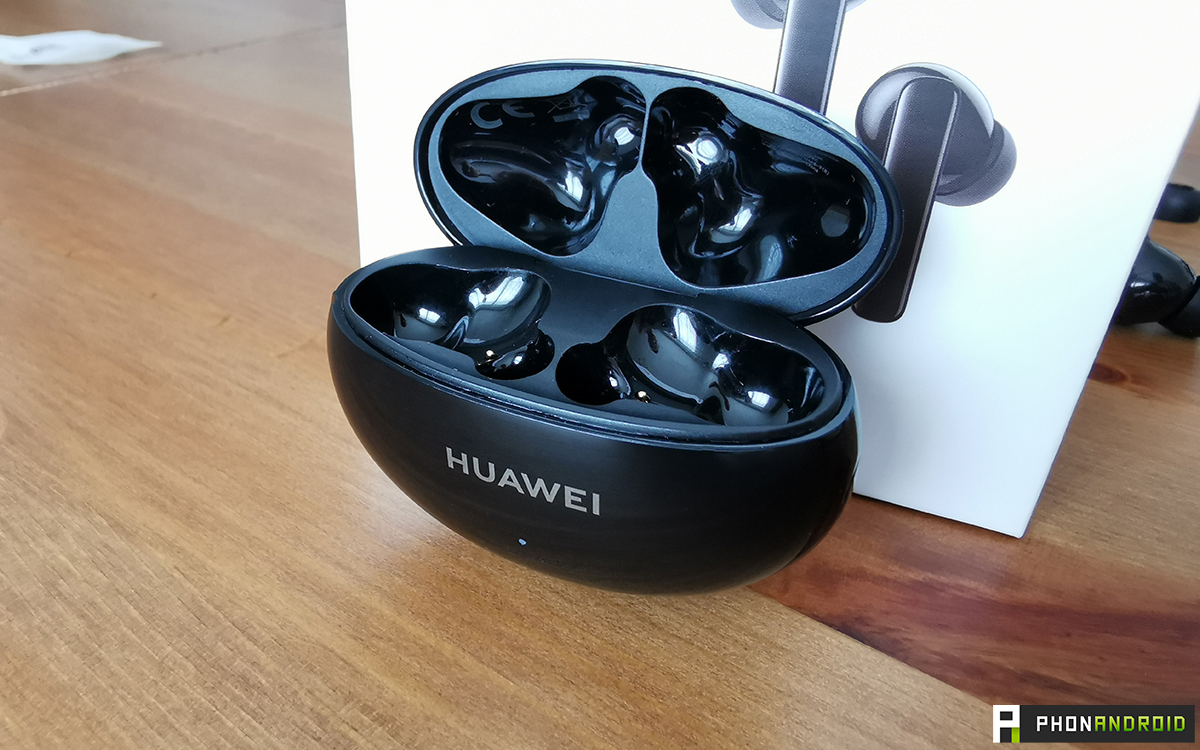 Freebuds 4i each benefit from a 10mm speaker and support AAC and SBC formats. If Huawei was just a stranger in the audio field 3 years ago, the phone giant has succeeded in establishing itself in this field by offering each new iteration of its headphones. And for the price offered, the quality of the Freebuds 4i is pretty good. So yes, we do not enjoy a level comparable to high-end models like the Jabra Elite 85t or the Sony WF-1000XM3, but for less than 100 euros, we have ’frankly very correct listening quality.

Whether it’s bass, midrange or treble, we can perfectly distinguish all the instruments in a song. We really appreciated the fact that the headphones offer a certain balance between each frequency: the audio reproduction is neither too “bassy”, nor too acute, whatever the song that is inflicted on the headphones (mea culpa: in our case, we have and abused Marcus Miller’s albums to test the headphones… But not that, don’t worry). 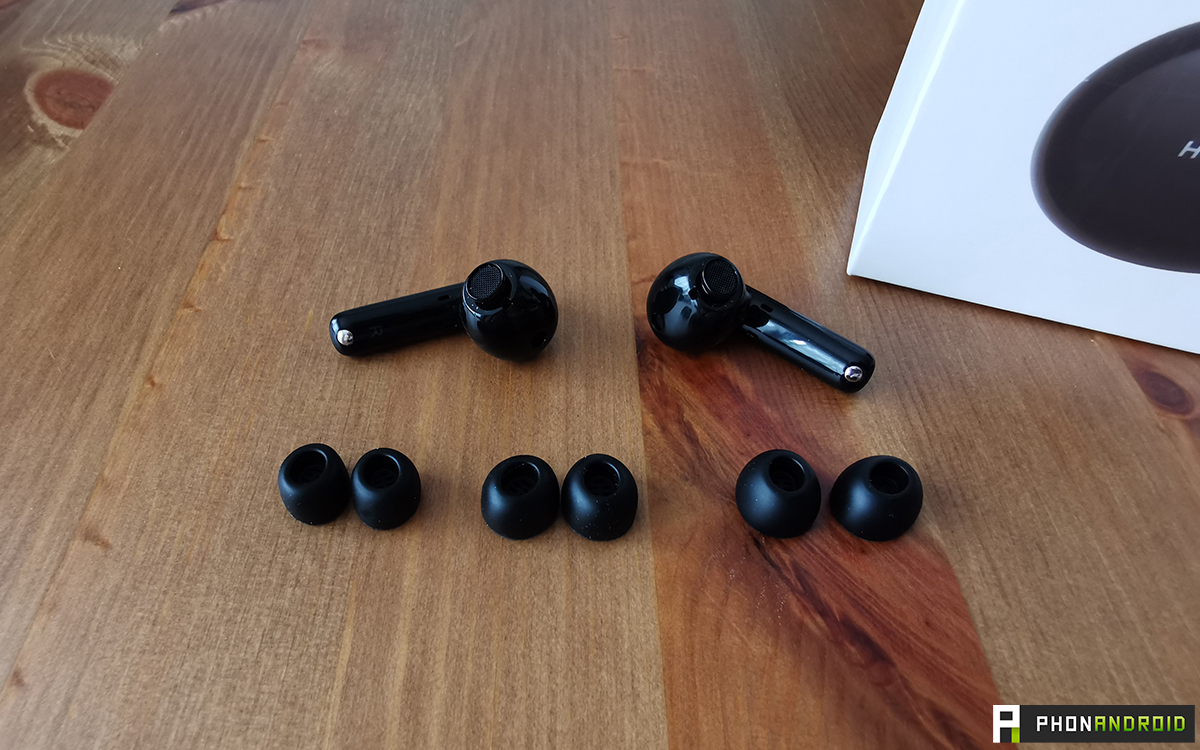 If we had to find a fault with these headphones, we should perhaps mention an obvious lack of bass amplitude. Of course, they are present, but they lack a “safe”. On the other hand, it must be recognized that this is very often the case with in-ear devices, despite all the efforts that manufacturers can make. It’s hard to compete with the amplitude offered by closed headphones.

Freebuds 4i take advantage of surface touch controls. Tapping once on the upper part of their rod allows, for example, to pause the current playback, while double pressing offers the possibility of answering a call. Finally, a longer press allows for example to activate or deactivate the active noise reduction.

If these commands are not suitable for you, it is possible to specify which action should be performed. For our part, we set the left earphone to skip to the previous track, and the right one to skip to the next track. But it’s all a matter of taste and use after all. 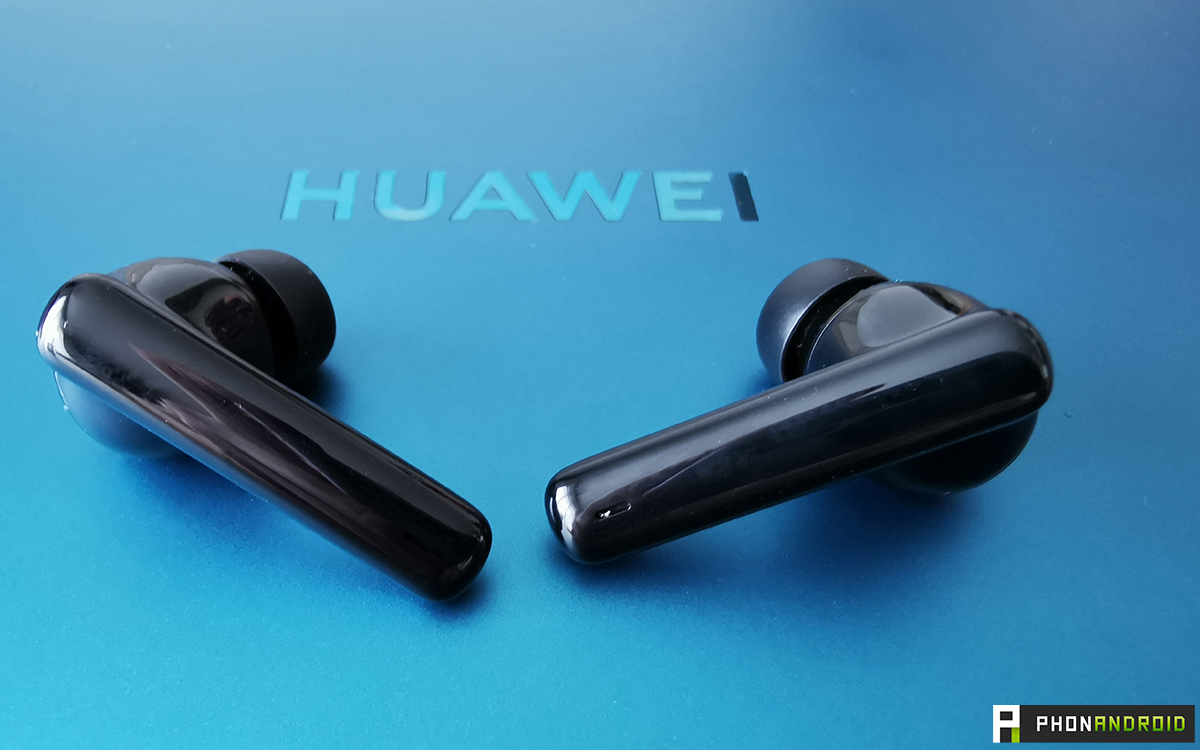 What about the responsiveness of these touch controls, other than they can be temperamental at times, but work pretty well overall? Clear, sometimes it will take you a few times before the headphones understand what your intention really is. And above all, be sure to aim for any tactile part that allows them to be controlled. But in general, the commands respond appropriately. Note also that, in rare cases, the simple act of touching an earpiece (to place it correctly in the ear, for example) is sufficient to be interpreted as a touch command. In short, some hazards are to be expected, even if overall, these little blunders are quite rare. In defense of the Freebuds 4i, few models offer foolproof responsiveness, even on much more expensive models. 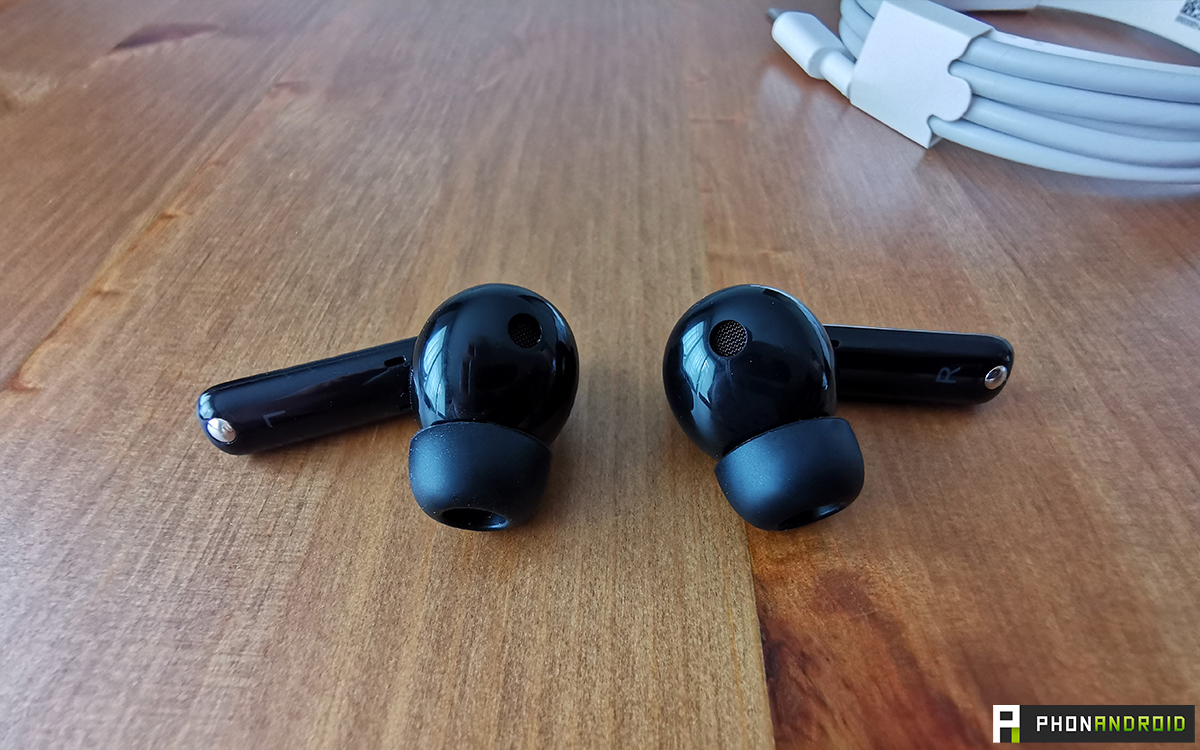 Finally, note that sliding your finger on the rod – as the Freebuds Pro allow – does not produce any action. Only the upper part of the headphones is tactile.

Noise reduction put to the test

The Freebuds 4i benefit from active noise reduction of up to 22 dB, which adapts to the sound environment in which you find yourself. However, this is a “dynamic” mode only. It is not possible to specify the type of environment in which you are located (open space, public transport, street, etc.). It is the accessory that determines what type of ANC should be activated. Note, however, that the headphones have 3 “noise control” modes: noise reduction, none or perception.

So, is the ANC module doing its job properly? The answer is mostly positive, but not in all situations. With headphones in your ears, you will be isolated “partially” isolated from your surroundings. If you can’t hear the passing cars on the street just below, you can hear your typing on a mechanical keyboard, for example. Is someone talking to you in the next room? Again, you will not hear any noise. On the other hand, if it is less than a meter, you will distinguish its words. In short, noise reduction is the bare essentials, but little more. Once again, for the price offered, it was difficult to expect more anyway. 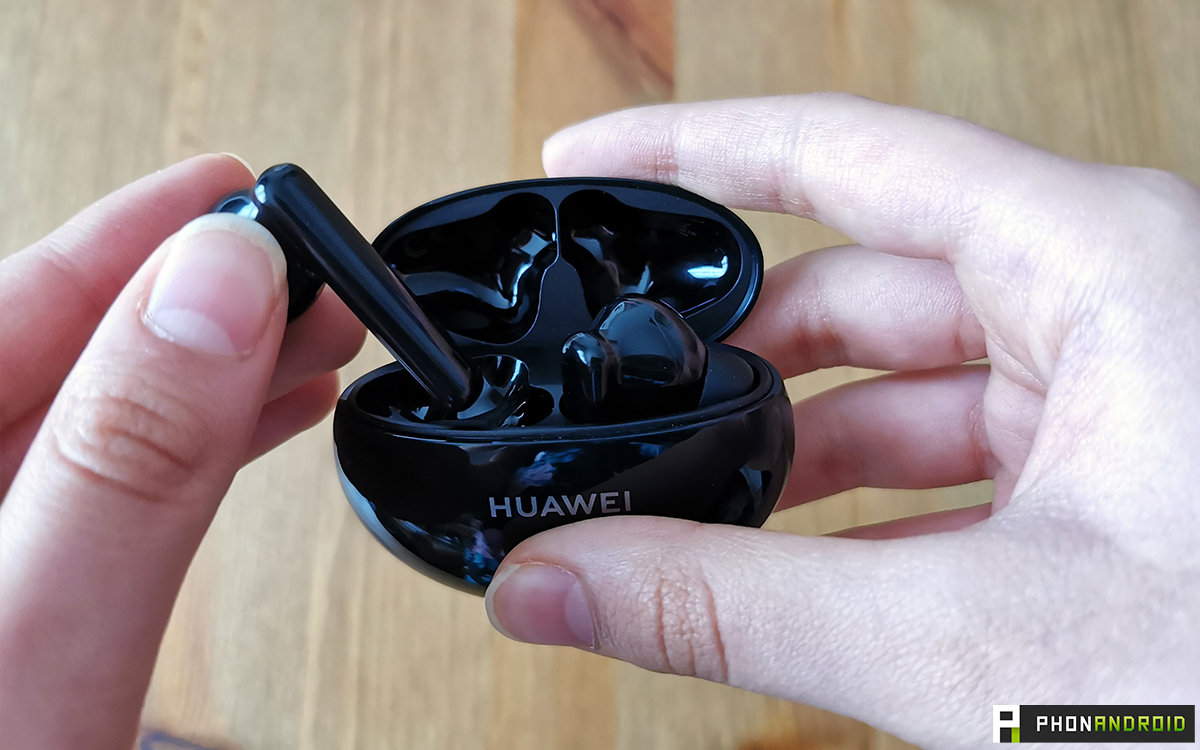 The headphones each have two small microphones housed on the inner and outer parts of their respective rod. They obviously make it possible to respond to phone calls, chat on WhatsApp, Skype, Facebook Messenger, etc. In reception, just as we listened to for listening to music, the headphones provide good audio quality. The sound remains sufficiently crystalline so that even in difficult situations (in the subway, for example), we manage to hear our interlocutor perfectly.

For his part, the interlocutor will hear you properly. However, your voice may not sound very natural to him, this is due to the relatively high compression. Without having the voice of Robocop, be prepared for a little vocal distortion on your side.

A practical Android app, but not revolutionary

Whether it’s the Freebuds Pro headphones, the Freebuds Studio headphones or the Studio X smart speaker, all Huawei audio accessories require an app to be fully functional: AI Life. Freebuds 4i are no exception to the rule and also require the app in question. By the way, note that it is imperative to go through Huawei’s AppGallery store to get the latest version of AI Life. The edition on the Play Store has not been updated for a while and does not recognize headphones.

If you don’t have a Huawei or Honor smartphone, you should first download the AppGallery, then the AI ​​Life app. It’s a bit restrictive, especially since the app doesn’t exist on iOS. And to complete it all, since it also allows update headphones firmware, it will necessarily go through an Android smartphone to take advantage of the latest firmware version. 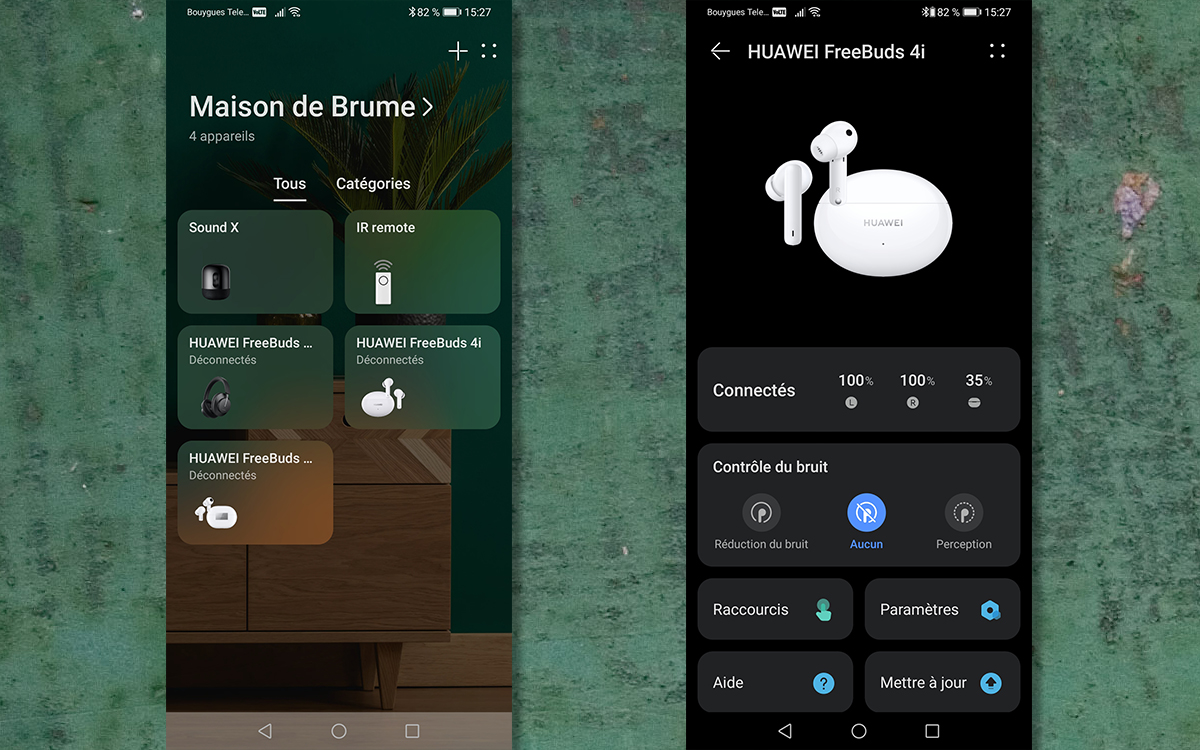 The application is relatively easy to use, not to say basic in the possibilities it offers. It allows you to manage headphones and various Huawei brand connected devices, such as routers, a lighting system, a toothbrush (yes yes!), Or even the famous Huawei Sound and Sound X designed in partnership with Devialet. 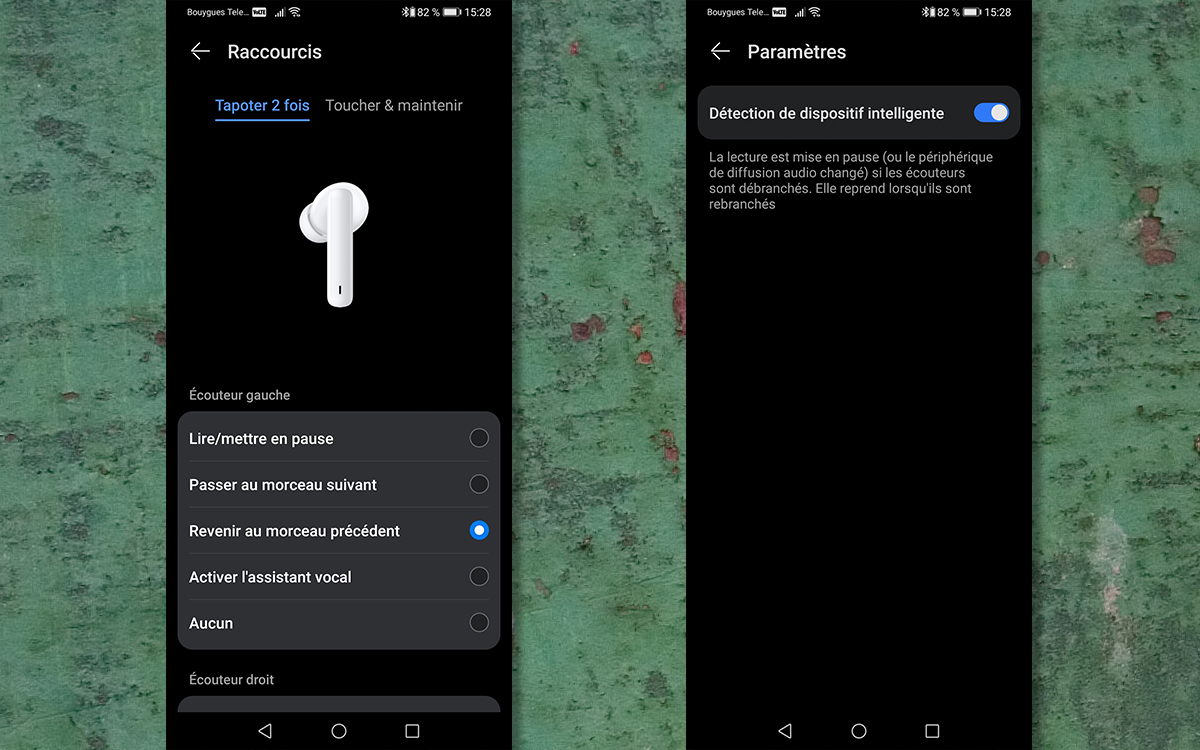 In terms of headphone control, we are rather limited: impossible to adjust, for example, the equalization of Freebuds 4i. This will have to be done using the music playback application if it allows it, which it still does not. Also, unlike the Freebuds Pro, the app does not allow you to test the various tips available in the box. It is therefore impossible to know which model is best suited to the shape of the ear canal, you have to go by hand (or by ear, rather). It’s a bit of a shame, that’s what made the AI ​​Life / Freebuds Pro so charming.

Huawei claims a lifespan of 10 hours of music listening without active noise cancellation, 7:30 a.m. with ANC, and 6:30 a.m. in calls (without ANC). In total, using the charging box, the manufacturer announces up to 22 hours of battery life.

While we weren’t able to hit those times, we got pretty close anyway. By deactivating the ANC, we were able to exceed the 9:45 am limit for music listening. With the reduction active, this result “fell” to 7:10 am, a duration very close to that announced by Huawei. And that’s really great news, because battery life was one of the main weaknesses of the Freebuds 3i, which struggled to last longer than 3 hours continuously.

Note, however, that we have repeatedly observed a much faster decrease in battery life on the part of the left atrium. When 60% of the energy remains on the right accessory, there is only 50% of its energy on its left counterpart. Strange…