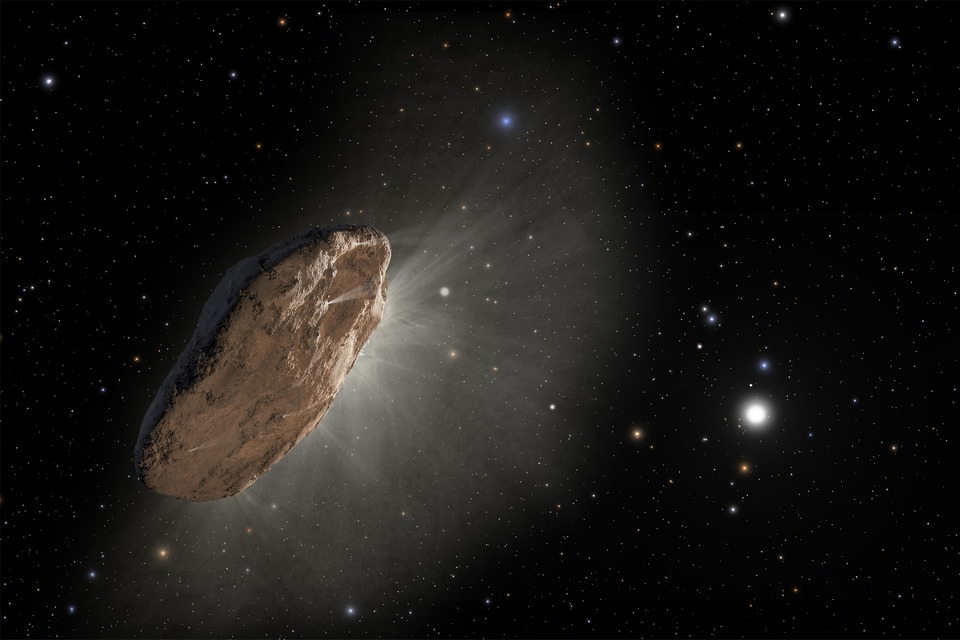 Never has a space body aroused as much curiosity and theories about its origin as ‘Oumuamua (“ scout from a distant past ”in Hawaiian), our first interstellar visitor. Since it was discovered, this strange object, born outside our solar system (the only certainty that astronomers have) has received numerous explanations for its composition. From an alien probe to a dust cigar, from the remains of a planet to molecular hydrogen, the novel now has a new chapter: it would be made of nitrogen ice.

Alan Jackson & I show in # lpsc2021 abstract 1718 that #oumuamua is perfectly consistent in every way (shape, acceleration, lack of H2O, CO, dust) w / a 40m chunk of N2 ice, albedo 0.6. It’s a fragment of an exoPluto & a cool exoplanet sample. Aliens? Please. Use some imagination!

From the start, ‘Oumuamua has intrigued the astronomical community: it is neither a comet nor an asteroid – its unusual shape (ten times longer than it is wide) and its impressive speed (315,000 km / h) have made it a puzzle shrouded in mystery. .

The assumptions about what he is were, one by one, dropped. The next one to be presented (by astrophysicists Alan Jackson and Steve Desch, during the 2021 edition of the Lunar and Planetary Science Conference, in March) says that the “scout of the past” would be not rich in extraterrestrial technology, pieces of a planet or dust , but in molecular nitrogen (Ntwo).

In the middle of last year, astrophysicists Darryl Seligman and Gregory Laughlin suggested that “the properties of’ Oumuamua can be explained if it contains a significant fraction of molecular hydrogen ice (Htwo) ”. The problem is that, if that were true, the mysterious space body would have completely evaporated on its journey before it even entered our solar system.

But the idea of ​​Yale University researchers tickled the minds of two Arizona State University astronomers: the sublimation of hydrogen (which would cause the non-gravitational acceleration of ‘Oumuamua by the solar system) would not be slow enough to explain the existence of the strange extraterrestrial cigar, but that of nitrogen ice, yes – it is abundant in large bodies in the outer solar system, such as Pluto and Neptune Triton’s moon, both originating in the Kuiper Belt.

An area that extends from Neptune’s orbit to 50 AU (an astronomical unit is equivalent to the distance between Earth and the Sun), the Kuiper Belt gathers thousands of celestial bodies, from small rocks to giants such as Pluto, Charon and Éris. In common, they have the thick layer of nitrogen ice that covers them.

When Neptune (the outermost planet in the solar system) approaches this belt of objects, its gravitational force spreads them, causing some to be launched towards the Sun or even outside the solar system; many end up colliding with each other, causing smaller objects to appear as a result of these collisions.

This gravitational movement ends up producing a quadrillion fragments of ice. Most of these objects (on average, up to a hundred meters) are basically made up of nitrogen ice – unlike asteroids and comets, whose mass has more water ice.

According to Jackson and Desch, a fragment resulting from these collisions would survive long enough to roam the interstellar medium – at least 500 million years, even suffering the inevitable erosion. The two scientists estimate that 0.1% of all objects in the Oort Cloud (a region one light-year from the Sun, beyond the range of any telescope) would be composed of nitrogen ice.

“If other star systems eject material like ours, we expect about 4% of the bodies in interstellar space to be fragments of nitrogen ice, making ‘Oumuamua a slightly unusual but not exceptional body,” says the study.