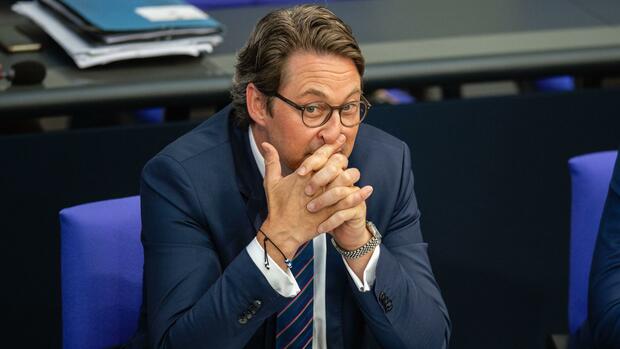 Berlin In the debate about the US company Augustus Intelligence, which was brought into focus by the CDU member of the Bundestag Philipp Amthor, the pressure to clarify is increasing for Minister of Transport Andreas Scheuer (CSU). In a letter to Scheuer dated June 17, Greens’ chief housekeeper Sven-Christian Kindler calls for “full transparency” about all meetings, discussions and contacts between the Ministry of Transport and Augustus Intelligence. The ministry had previously given contacts to the company.

Kindler’s letter, which is in the Handelsblatt, is accompanied by a comprehensive list of questions, which Scheuer should answer by July 1. For example, Kindler wants to know the criteria according to which the participants in an expert discussion on artificial intelligence (AI) were selected on September 26, 2018 in Berlin. In addition to Augustus Intelligence, representatives from BMW, Bosch, Deutsche Bahn and Telekom as well as German universities and research institutes took part in the discussion.

Kindler also wants to know to what extent there have been further contacts or discussions with the company and whether Federal Minister Scheuer may still be in contact with Augustus employees.

As the CDU Transport State Secretary Steffen Bilger said when asked by the Vice-President of the Left Group in the Bundestag, Petra Sitte, the expert discussion provided the Ministry of Transport with “comprehensive information” about the “potential and perspectives, AI and digitalization for sustainable and intelligent Mobility of the future ”- as well as a“ collection of ideas ”. The document is available to the Handelsblatt.

Due to data protection reasons, Bilger did not provide any information on the question of who participated in the conversation. Bilger further announced that Augustus Intelligence had been invited “to bring the perspective of a start-up about agile and matrix thinking in dealing with new challenges of the platform economy in a user-oriented manner”.

“A prankster who thinks bad”

A spokesman for the Ministry of Transport confirmed contacts with the company on Thursday. The Federal Ministry of Transport and Digital Infrastructure (BMVI) has drawn up an “Action Plan on Digitization and Artificial Intelligence in Mobility”, thereby supporting the “Artificial Intelligence Strategy of the Federal Government”. In this context, there were discussions and exchanges with companies and research institutions, for example on September 26, 2018 in Berlin, the spokesman explained

The Ministry responded to an article in the “Spiegel”, which asks how the meeting with the startup and the representatives of established German companies came about. The magazine writes that if Amthor had not made the contact, other influential people in the company’s environment with their contacts to the CSU could have offered themselves as mediators. This includes ex-Defense Minister Karl-Theodor zu Guttenberg (CSU), who even joined Augustus as a partner and became president of the company.

The left-wing politician Sitte criticized the information policy of the Ministry of Transport. “Augustus Intelligence is unknown in Germany and has never attracted any entrepreneurial attention, but it unites former Federal Minister Guttenberg and Mr. Amthor under one roof,” Sitte told Handelsblatt. The company had been invited by the ministry on an equal footing with industrial giants and the top research institutions in the Federal Republic. “Personal contacts should not have played a role in this? A prankster who thinks bad, “emphasized Sitte.

According to the spokesman for the ministry, up to twelve people from business and science were sought for the expert discussion. When selecting the people, the focus would have been on professional competence and different perspectives from large companies to startups. The two representatives of Augustus Intelligence had expertise in artificial intelligence, deep learning, data platforms and blockchain as well as knowledge in the field of AI in America and Asia. “It was a pure exchange of ideas.”

Before this expert discussion, there was “a first meeting” on July 9, 2018 in the Ministry. In addition to representatives from Augustus Intelligence, Minister Andreas Scheuer (CSU) was present, as well as a department head, the minister’s personal adviser, the minister spokesman and the communication department head.

Amthor is criticized after the “Spiegel” reported that he was lobbying for the Augustus Intelligence company and in autumn 2018 asked for political support with a letter to Federal Minister of Economics Peter Altmaier (CDU). Later Amthor is said to have received stock options and a director position with the US company. The politician described this as a “mistake” and announced his retirement from the company.

Amthor is still under pressure. The reason is his work for the White & Case law firm. According to “Spiegel” there should be a connection between the law firm and Augustus Intelligence. That would suggest Augustus company documents. As a result of the “Spiegel” research, Amthor stopped working for the law firm – in order to “not make himself politically more vulnerable”, as he announced via his Bundestag office.

Amthor had notified the Bundestag administration that he had received between 1,000 and 3,500 euros a month as a “freelancer” at White & Case. On request, Amthor did not comment on what White & Case paid him for.

As the “Spiegel” reports further, the CDU politician has made numerous trips with Augustus Intelligence employees, for example to the Oktoberfest in Munich 2019 or to New York. Amthor said that these trips were “all and exclusively business trips”. On request, he did not want to say whether Augustus Intelligence had paid for the trips.

More: Augustus Intelligence – Read here why the start-up is a strange company.