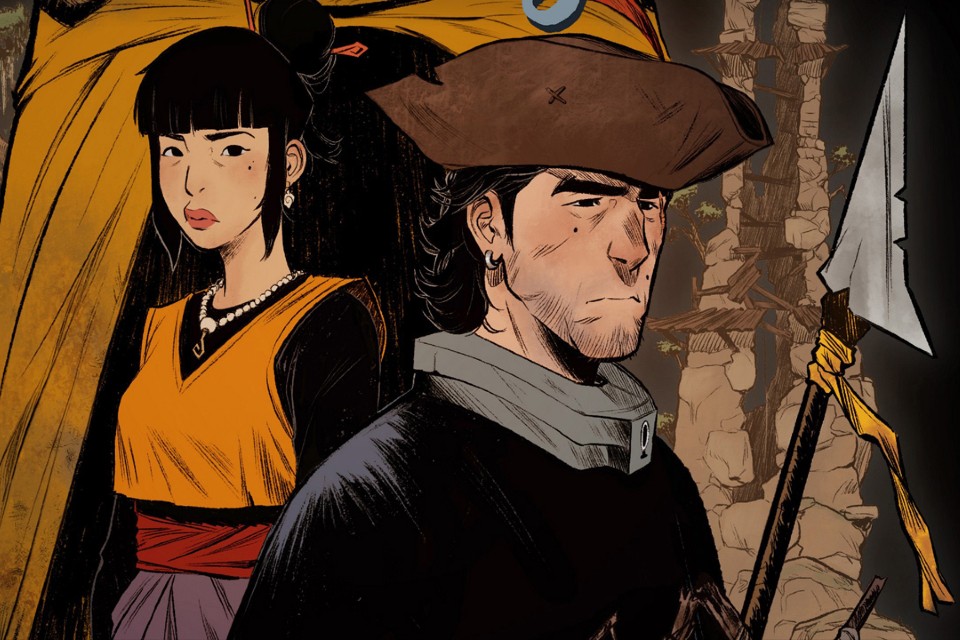 Devolver Digital always tries to publish action games with a different footprint, and Olija it’s another great addition to your catalog! With versions for PC, Nintendo Switch, Xbox One and PlayStation 4, this Skeleton Crew production uses a retro game aesthetic to create a new, unique and engaging adventure.

Here, we control the castaway Faraday while he and his crew are trapped in the Terraleva archipelago, a hostile country full of threats at every corner. The few survivors soon establish a small base that serves as their central hub, from where it is possible to embark for the other areas of the game, several dungeons full of collectibles and secrets.

In the first minutes of the campaign, Faraday finds what will become his main ally throughout the journey: a legendary harpoon with special powers. With it, it is possible to access distant locations and, with a simple click of a button, transport yourself immediately there.

As it can also be embedded in enemies, the game quickly gains a lot of vertical mobility and presents dozens of different ways of approaching combats and environments, ensuring that your flow of action is never too repetitive. Short-range melee attacks are rewarding and make your enemies fly away, but you must also abuse secondary attacks with long-range weapons at the time of the most appealing bosses.

As you progress through the dungeons, you will reap a lot of loot hidden by the scenarios and scattered across chests. These materials can and should be used between phases to make new hats for Faraday, which will then gain more passive talents to be able to navigate the turbulent seas of Terraleva with more tranquility.

The whole action takes place with retro visuals that seem straight out of computer games from the early 1990s, like the classic Another World, a clear inspiration for the cut scenes that help to tell the plot of the game. The characters and monsters are all designed in a way that emulates this polygon aesthetic with little detail.

The inspiration in Another World also comes in handy in the segments where Olija presents some simple puzzles to the player. You will hardly be stuck in the same place for a long time, but it is gratifying to have to think a little about how to access platforms that seem inaccessible, where to stick your harpoon, to which place to teleport, and where the hell is that damn key that you both hide? you need to open a door that is blocking your progress.

A memorable island … in small doses

As Faraday progresses through the narrative and evolves his powers, more interesting characters come his way, like the mysterious woman Olija who gives the game its name. Without delivering any major spoilers, this is a story tailored for those who like myths of sailors and fantasies about pirates and maritime exploration, with a grateful oriental flavor.

The Japanese influence goes beyond mythology and also reaches the soundtrack, which uses some of its elements and traditional genres, in addition to betting on flamenco and more discreet ambient music to pack the exploration. It’s just a shame that both the trail and the environments end up getting too repetitive over time.

To some extent, this was unavoidable considering that the game’s design revolves around exploring dungeons with few polygons and minimalist art, but it is difficult to play for many hours in a row without feeling that you are passing through very similar places over and over again. At least the campaign is short and you will be able to finish the game before you feel that your mechanics and environments have already given everything they had to give.

Olija it’s another great option for fans of indie games with a lot of action and a healthy dose of puzzles and exploration. Faraday’s narrative is out of the ordinary and is a great chance to get to know mythologies and stories from other cultures, but he works best in small doses, since the dungeons and scenarios are not that varied. It’s really worth it for your electrifying combat!

“Olija mixes many doses of action with great puzzles in a rewarding exploration!”

Embark on a dangerous mission and try to escape from a mysterious island! It is a strange world and its inhabitants, including Olija, an enigmatic woman to whom Faraday finds himself increasingly attached.