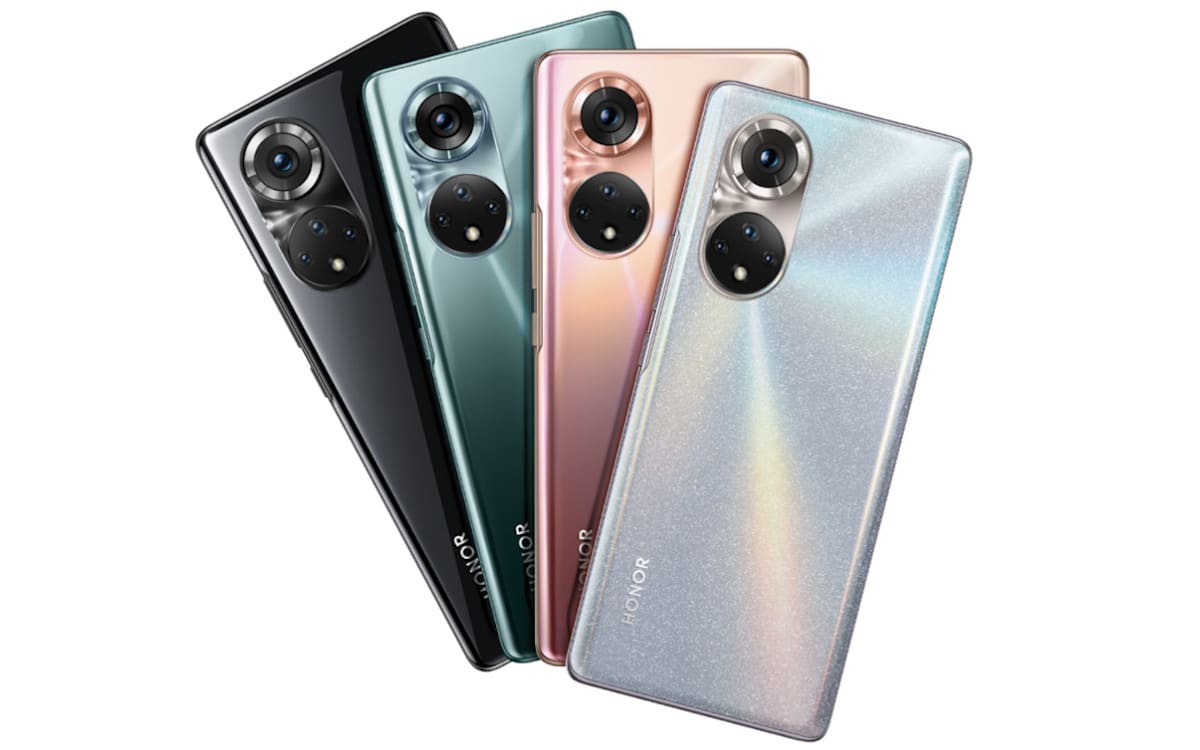 As expected Honor introduced the Honor 50 series in China. A series composed of three smartphones: Honor 50, Honor 50 Pro and Honor 50 SE. The brand indicates that the first two will soon be offered in France. The datasheets are well equipped, although the processor is not a high-end model. Presentations.

In November 2020, a year and a half after the start of US sanctions against it, Huawei sold the Honor brand. The new owner is a consortium of four Chinese companies. The sale amount has not been disclosed, but is expected to be slightly over 12 billion euros. Thanks to this takeover, Honor has become independent from Huawei. And the brand is no longer subject to restrictions on American technology.

First consequence, Honor can again integrate Google services in its terminals intended to be marketed in the West. The boss of the brand confirmed the information a few hours ago to some American media. The next Honor will therefore be equipped with the Play Store which is so lacking in Huawei’s phones. Second consequence, Honor can again provide itself with components for its smartphones.

Not one, but three Honor 50 formalized

In fact, Honor wants to return to the “game”. For that, you need products. Earlier this month, Honor made an appointment with its community for a launch. The conference took place yesterday. And it was about the Honor 50 and its different variations. The Honor 50 has been the subject of several leaks in recent weeks. But we were surprised to learn that it wasn’t justa “Pro” version, but also an “SE” version. 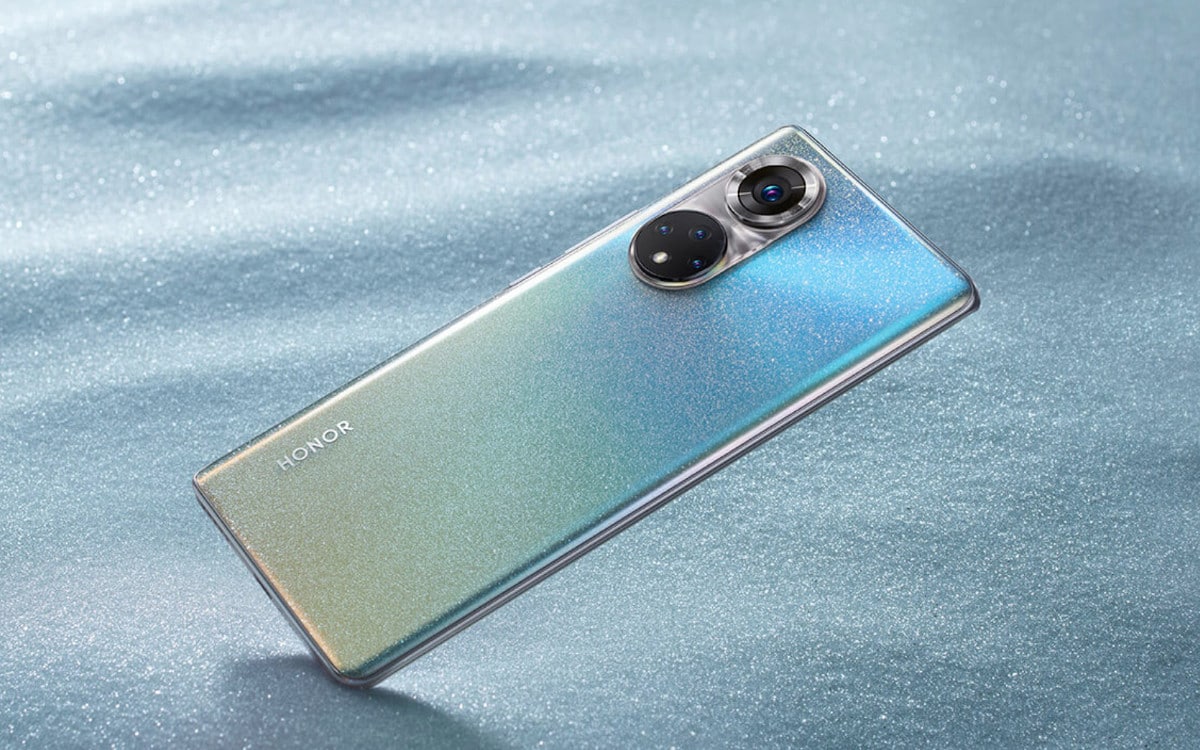 What are these three smartphones made of? Let’s start with the Honor 50. It’s the smallest of the bunch, although its screen is still 6.57 inch. The slab is OLED and Full HD +. It can display up to 1 billion colors different. Its refresh rate is 120 Hz. A punch is visible on the front for a selfie sensor of 32 megapixels. It is curved on the two side edges. And best of all, a fingerprint reader is integrated into it.

At the back, you find a photo module with four sensors: a very large one in the upper circle and three smaller ones (with a flash) in the lower circle. The biggest is a sensor 108 megapixels (which you also find at Xiaomi for example). The other three are 8-megapixel (wide-angle), 2-megapixel (macro) and again 2-megapixel (depth calculation) models. A configuration not very original.

Inside the Honor 50, you’ll find a trendy premium mid-range platform with a Qualcomm Snapdragon 778G (successor to the Snapdragon 765G), 8 GB of RAM and 128 or 256 GB of storage depending on the version. Of course, the SoC is 5G compatible. The battery has a capacity of 4300 mAh. It is compatible with fast charging 66 watts. This will be one of the strengths of the phone. It only takes 20 minutes to recharge the Honor 50 to 70% depending on the manufacturer. Finally, Android 11 is present, dressed in the interface Magic UI 4.2 with Google play.

Let’s continue with the Honro 50 Pro. To put it simply, this is a bigger Honor 50 and improved in some ways. The nature of the touch screen is identical (OLED, 120 Hz, Full HD +, integrated fingerprint reader). But she measures here 6.72 inch. And it is curved. The processor is also the same (Snapdragon 778G), The storage options are the same (128 GB or 256 GB), but there are two configurations for the RAM: 8 GB or 12 GB.

The photographic equipment is identical to the rear (108 + 8 + 2 + 2 megapixels), but changes slightly at the front. You find a punch which is not only wider, but also placed on the left. It houses a dual selfie sensor with the 32 megapixel sensor the Honor 50 to which is added a sensor 12-megapixel ultra-wide-angle. With this pair, Honor wants to address all influencers who have a video blog.

Last important difference: the battery. It offers a lower capacity than that of the Honor 50: 4000 mAh. It’s an extremely amazing choice. But that’s not as much as the power with which this battery can be recharged: 100 watts. This is a very strong announcement. The battery can thus be recharged from 0 to 100% in 25 minutes according to Honor.

Let’s finish with the Honor 50 SE. It’s the most affordable of the trio, of course. And some concessions were made to lower the price. First of all, the screen is no longer curved, but flat and it is no longer OLED, but IPS. It measures 6.78 inch. It is always compatible Full HD + and 120 Hz. And the fingerprint reader is positioned on the side and no longer under the panel.

The 5G SoC no longer comes from Qualcomm, but from MediaTek. This is the MT6877, alias Dimensity 900. It comes with as much RAM and storage as the Honor 50. The battery is similar to that of the Honor 50 Pro: one model 4000 mAh. On the other hand, no 100 watt fast charge here, but the fast charge 66 watts of the Honor 50. Which is already very good. Honor claims that 20 minutes is enough to recharge the battery to three quarters.

Side photo, the Honor 50 SE loses 2 megapixel sensor for the calculation of the depths (but it was not so useful) and the 32 megapixel selfie sensor is replaced by a model 16 megapixels. Very slight changes are to be expected in the network connections side, but the gist is there. Like the Honor 50 and 50 Pro, Magic UI 2.0, Android 11 and Google services are expected there.

Here is the new Honor range presented yesterday. It came with a pair of TWS headphones called Earbuds 2 SE (which look a lot like Oppo’s Enco Xs). Chinese prices for its three smartphones vary from 312 euros to 515 euros. During the conference, Honor unveils where the range will be marketed. And it will be available in Europe, of course. The French subsidiary of Honor also confirms that the Honor 50 and 50 Pro will be well sold in France. But no date and no price were mentioned. Also, it doesn’t seem certain that the Honor 50 SE is planned.