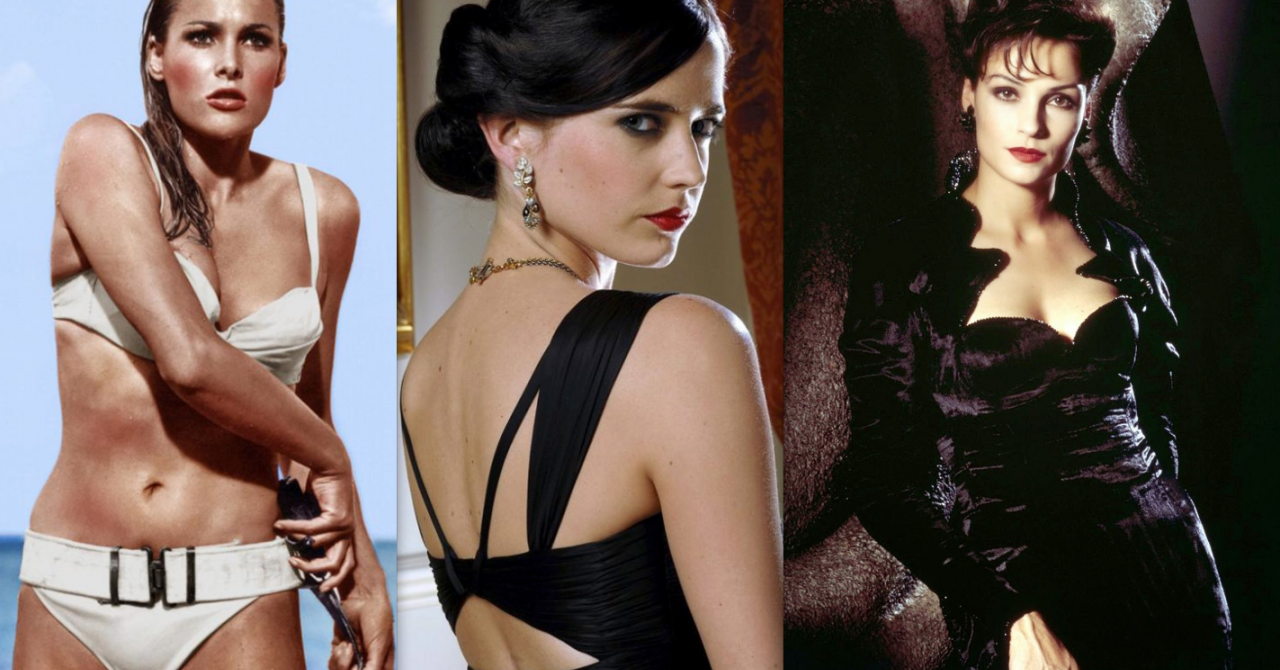 Honey Ryder (Ursula Andress)
The film: James Bond vs. Dr. NoThe role: the one that has so far remained in people’s minds as THE quintessential James Bond girl. Honey is certainly very beautiful, but also knows how to defend herself perfectly and repeatedly points out to 007 that she does not need the help of anyone, not even him. He is also quite surprised to learn the fate suffered by the man who raped her. THE scene: when we discover it, at the same time as James Bond who decidedly is always in the right place at the right time . The agent simply sees her come out of the water in a bikini (mythical sequence reversed in Casino Royale, where it is Bond who comes out of the water) and the actress’ physique does the rest: Bond compares her to Botticelli’s Venus. If the sequence may seem almost banal today, it was not the case in 1962, when the wearing of the bikini was far from being as usual as now. The retort: ​​speaking of the man who raped her : “I put a Black Widow in her mosquito net … a female, these are the worst. It took an entire week to die. “

Pussy Galore (Honor Blackman)
The film: GoldfingerThe role: Pussy Galore is in the service of Goldfinger, and defines himself first as an enemy of the spy, although the game of seduction between them greatly relativizes his status. Needless to say, the surname “Pussy” aroused a little stir at the time. THE scene: the fight-seduction in the straw between her and the secret agent, which would moreover pose certain problems today because of her ambiguity. The reply: “I am immune”, she naturally answers when Bond tries to seduce her at first, which is a nod to her literary version: a lesbian. Try again, James.

Dominique Derval (Claudine Auger)
The film: Operation ThunderThe role: nicknamed Domino, she is kept in a golden cage by Emilio Largo, his “companion”. Although she is not literally captive and lively in luxury, she remains a melancholy character, knowing that she is in a dead end. In addition to succumbing to her charm, she sees Bond as a way to free herself. THE scene: the (suggested, of course) sequence of aquatic love with James Bond, which could have shown us Domino’s bikini going up and floating in the surface, but that was deemed too explicit at the time. Other times, other customs. The retort: ​​”I’m glad I killed him”, obviously talking about Largo

Teresa Di Vincenzo (Diana Rigg)
The Movie: In Her Majesty’s Secret ServiceThe Role: Teresa, says Tracy, is the only woman who can boast of having put the ring on the fingers of the most secret agent runner. After preventing him from committing suicide, Bond falls more and more under the spell of the beautiful, who turns out to be much more than a woman in distress (she helps him to escape the men of the Specter in particular). Once the adventure is over, the two lovebirds get married, and fatally, Teresa is murdered. It’s sad but that was where the Bond saga turned into Married, two children. THE scene: the sequence which summarizes the flirtation between the spy and her sweetheart, which remains quite unique in all the franchise, since here we are witnessing pure romance for once. The reply: to James Bond, just before the tragic end “but you gave me a wedding present.” The most beautiful I can have: a future. “

Anya Amasova (Barbara Bach)
The film: The Spy Who Loved MeThe Role: Also called Agent XXX (a thought for Vin Diesel and Ice Cube), Anya is the Russian counterpart to James Bond. The two collaborate because their mission is essentially the same although they act for different interests. Only everything becomes complicated when Anya learns that it was Bond who had previously killed her lover, another Russian spy. This character is representative of the James Bond girls “independent” and as dangerous as the hero. THE scene: while she is about to carry out her revenge with delay and to execute 007, the trickster succeeds in convincing her not to nothing to do with it and she decides to join him in bed instead. The retort: ​​”So when this mission is over, I will kill you too.” “

Melina Havelock (Carole Bouquet)
The film: Just for your eyes The role: Melina is above all driven by a desire for revenge, she wants to kill the murderer of her parents, Hector Gonzales, and this is how she meets Bond. Determined and courageous, she has, among other specificities, her favorite weapon: a crossbow which allows her to eliminate a good number of enemies. Otherwise she also has a 2 Horses. THE scene: not necessarily very sexy, but the aquatic sequence where Melina helps James Bond, more than several hundred meters deep while fighting the men of Gonzales remains spectacular (especially as Carole Bouquet can not turn underwater at the time of the film because of a sinus problem, the illusion is perfect). The retort: ​​”Only for your eyes”, necessarily

Octopussy (Maud Adams)
The film: OctopussyThe role: Octopussy, so nicknamed because of her pet (a poisonous octopus, therefore), is a woman of power, intelligent and self-confident. At the head of a criminal organization, she owns an island over which she reigns supreme and where only women have the right to a city. Octopussy and Bond show mutual respect despite their divergent interests, in particular because they know each other well. Actress Maud Adams is also the only one to have “returned” in several James Bond, although she does not play the same role in The Man with the Golden Gun, and she appears very stealthily in a scene crowd for Dangerablement Vôtre. THE scene: when she passionately kissed 007 at the very end of the film while he was still in bed because of his leg injury … but not for long. Finally, technically, he stays in the same bed, but we understand each other. The reply: “Oh, James, we pair you and me”

May Day (Grace Jones)
The film: Dangerously yoursThe role: both companion and right arm of the bad guy from the film Max Zorin, May Day is an effective and unforgiving killer. As physically strong as she is sexy, she also stands out for her unforgettable wardrobe throughout the film. Her reversal following the betrayal of her “boyfriend” obviously makes her more interesting than a simple “nasty” service. THE scene: when she comes back to her room and finds Bond in her bed, before joining him there . Sometimes words are useless. The reply: “Kill Zorin on my part!” “That sums up the character well.

Xenia Zaragevna Onatopp (Famke Janssen)
The film: GoldenEyeThe role: Xenia is a new generation femme fatale, with all that that implies. Sexy, dangerous and above all domineering, she seems to get a kick only by executing her opponents, her special move being quite particular: she smothers a man with her legs, in full part of her legs in the air. In the heat of the moment, she is often quite hysterical. THE scene: the fight with James Bond in the sauna, a kind of mirror inverted from that which opposed Sean Connery to Honor Blackman: this time it is Xenia who literally jumps on the spy, before trying to eliminate him. The retort: ​​”Do you think you can subdue me? “

Giacinta “Jinx” Johnson: Halle Berry
The Movie: Die Another DayThe Role: Basically the character of Wai Lin should have returned but Michelle Yeoh was not free. It is therefore understandable that the character of Jinx is, in addition to being attractive, a woman of action who has nothing to envy the know-how of Bond himself. She is an NSA agent who turns out to be a significant ally for 007. Her very first appearance where we see her come out of the water is of course a nod to the cult scene of Honey Ryder. scene: his confrontation with Miranda Frost (Rosamund Pike), in particular because the two women, in addition to being formidable in combat, cannot help launching cowards around their respective relationships with James Bond, or more generally with sexual connotations. The reply: addressing James Bond, who searches among other Zao, an enemy with diamonds encrusted on the face “of course [qu’on cherche la même chose] : love, peace in the world, and our friend with overpriced acne ”.

Vesper Lynd (Eva Green)
The film: Casino RoyaleThe role: Vesper works for the English government and it is up to her to “chaperone” Bond, who in this film is still a “baby agent”, considered too impulsive. The character is far, very far even from being a simple potiche: very intelligent, she is not at all impressed by the spy and it is besides it which saves her life when he finds himself poisoned. Vesper can also boast of having made him hang up: once in a relationship with her, he gives up his job as a spy to enjoy life with the beautiful. THE scene: difficult, but it is that of his death which, in addition to anchoring Daniel Craig’s James Bond in an assumed darkness, is definitely memorable: his silent cry underwater, sad and beautiful. The reply: speaking of the elevator and speaking to Bond ” Take the next one. There is not enough room for me and your ego. “

Bonus: Jill Masterson (Shirley Eaton)
The film: GoldfingerThe role: Jill only appears on the screen for a very short time (barely five minutes in fact), she is a Goldfinger employee who helps her cheat when he plays cards . After having challenged him and spent the night with Bond, she had a tragic end: THE scene: the discovery by James Bond of his corpse entirely covered in golden paint, a cult sequence.