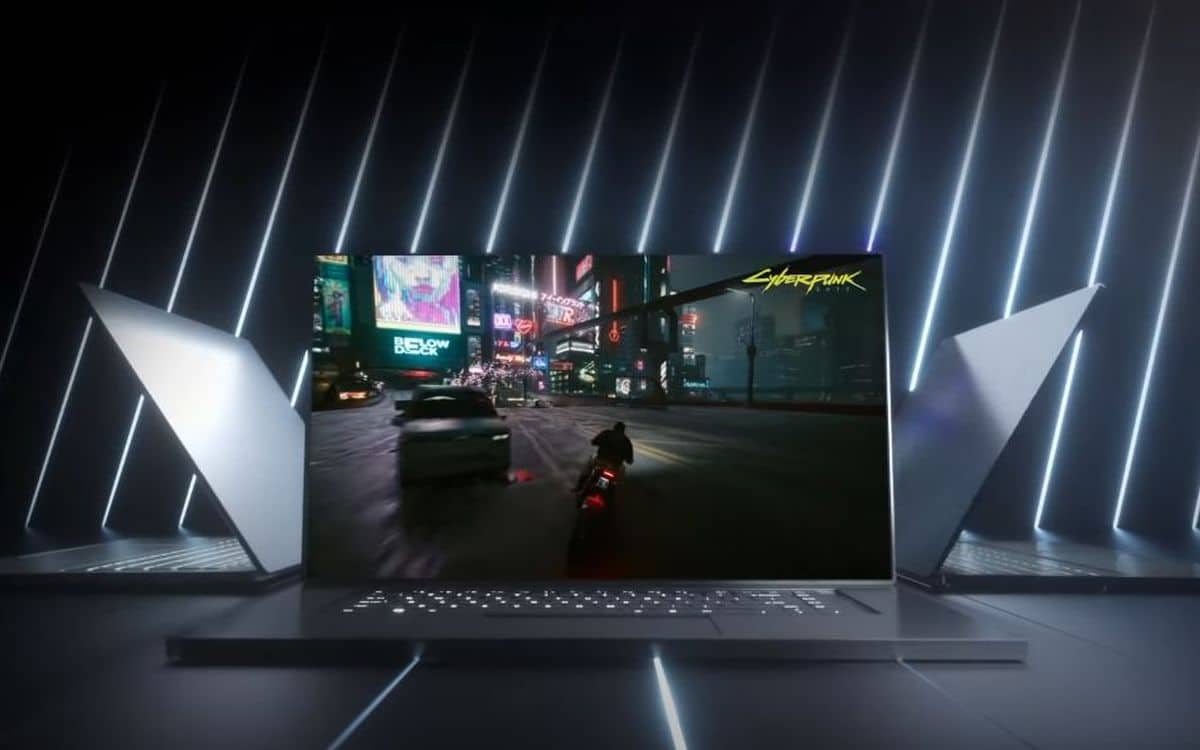 Nvidia presented its new line of RTX 3000 cards dedicated to laptops at a virtual conference at CES 2021. It will arrive on more than 70 gaming computers and offers a technical advance over the previous generation. Ray-tracing is finally democratizing on laptops.

Last September, Nvidia launched its new generation of RTX 3000 graphics cards, aimed at desktop PCs. The Californian brand is now rolling it out in the world of laptops by announcing the arrival RTX 3060, 3070 and 3080 on laptops dedicated to gaming.

Thus, from January 26, more than 70 laptops of all brands will offer these new cards which will replace the aging RTX 2000 series. This generation is of course synonymous with an undeniable gain in power. With the RTX 3060, we can thus hope to play at 90 frames per second with ray-tracing enabled, all at 1080p. In its presentation video, Nvidia states that a PC equipped with an RTX 3060 is 1.3 times faster than a PS5. That doesn’t mean much, but at least we’re sure he’ll run “ultra” the last big games around.

Ray-tracing is democratized on cellphones

A PC with an RTX 3070 card will be 1.5 times more powerful than a laptop with an RTX 2070 and Nvidia promises here gaming at 90 frames per second at 1440p. Finally, the RTX 3080 is obviously part of the game on laptops for optimal performance easily exceeding 100 FPS at 1440p with ray-tracing enabled.

The new cards use the third generation of the famous Max-Q design which makes it possible to gain greatly in finesse while being reasonable in terms of heat output. It brings some new features that manufacturers can use, such as Dynamic Boost 2.0, which allows consumption to be managed between the CPU and the GPU. Likewise, we note the appearance of the Resizable BAR, which allows the CPU to use all of the graphics card’s memory. It is the Nvidia equivalent of AMD’s SAM (Smart Access Memory), introduced with the RX6000 series. Finally, the Whispermode is back in version 2.0 and allows a much better intelligent management of ventilation.

To demonstrate the power of its new range, and more specifically the RTX 3080, Nvidia released a short video in which a man launches Flight Simulator on a three-screen setup. After a few minutes of playing, you realize that it’s not on a big desktop PC, but on a Razer Blade 15 equipped with an RTX 3080.

Razer will not be the only manufacturer to soon offer equipped computers, far from it. More than 70 references of different brands are already offered on the merchant sites. Among them, we can cite Acer who presented their new Nitro 5 in the process. Equipped with a Ryzen 7 and an RTX 3060, this 17-inch PC will retail for 1399 euros. Asus is also in the game with its ROG range. The Strix 15 and 17 will thus be equipped with these new cards, which will not be too many to take advantage of the 300 Hz screen of the more expensive model. Alienware has unveiled its m15 and m17, also equipped.

Other manufacturers are added to the list, such as MSI, Lenovo and Razer. Nvidia announced that laptops equipped with RTX 3060 will have a starting price of $ 1000, while those with an RTX 3070 will be $ 1300 minimum. To get a laptop with an RTX 3080, you’ll have to break the bank, since the cheapest model will start at $ 2,000. The prices then vary according to the manufacturer’s appreciation and the characteristics of its machines.

The arrival of the RTX 3000 range marks a small revolution in the world of laptops, which is therefore no longer lagging behind desktop PCs. Note that for the latter, Nvidia has also announced the upcoming arrival of the RTX 3060, which promises ray-tracing gaming at 60 FPS in full HD. We just have to hope that there are stocks, supply concerns have been common since the launch of this generation.