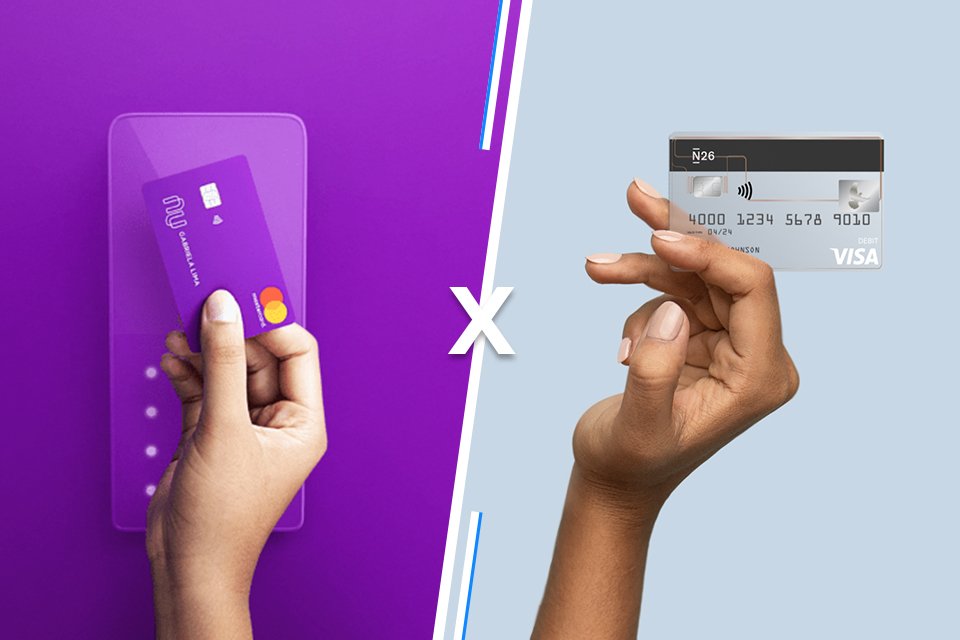 For those who love fintech and hate bureaucracy, I already leave the spoiler alert: both Nubank and N26 are excellent bank options and are “N” times better (at least for me) than most options on the market.

As a subject enthusiast and client of both, I compared the services of the two fintechs.

Both offer a cheap digital account (always remember that there is nothing “for free” in the world), without monthly fees and with a very stylish card. The two also work with the Mastercard banner and can be used in face-to-face and online purchases.

The two companies have a well-built, super-intuitive application that works for both iOS and Android. They are “unicorns”, that is, there are a lot of good and serious people in both companies to build what reaches your pocket. The N26 raised another $ 100 million round; with valuation $ 10 billion, Nubank launched its credit card in Mexico.

But let’s get down to business? Which one is better?

N26 is a German bank, based in Berlin, founded in 2013 and which, in May 2020, was valued at more than R $ 18 billion reais. It follows the German model of building startups: they develop business models with enormous efficiency that are being tested and validated around the world (“nothing is created, everything is copied”). It has more than 5 million customers and is one of the most important fintechs in Europe.

In turn, Nubank was founded in 2013 by a team of foreigners, being born and raised here in Brazil. It has investments from several international funds and, in 2020, it was valued at more than R $ 50 billion reais and serves more than 30 million customers in Brazil and other countries in Latin America.

For me, security is the most important theme of any company that operates in the financial market and, until the N26 announces who its partners in Brazil will be and how it will operate, the positive point here certainly goes to Nubank.

For those following the international media, the N26 had a serious history of “abandoning its customers” when it had a recent problem in the UK. Because of Brexit, it ended its operations there and left its customers very upset.

Because of this and as Brazil is a “very specific” country, Nubank takes advantage here, as it already knows how to operate and has done an excellent job of security, with the approval of the Central Bank.

Important: the N26 application has some interesting layers of security, such as the double factor of authentication, confirmation via fingerprint and the impossibility of capturing screen prints. Both must encrypt the database and use sophisticated security technologies against intrusion.

The account opening process is incredible at both companies, but sometimes Nubank has the famous long lines. So, I prefer the N26 process.

As the N26 is more automated and efficient, the entire process of opening an account, from the arrival of the card to the contracting of services, is faster. But again it is important to highlight: both applications are sensational, the account opening process for both is very simple, fast, efficient and everything works very well.

I love Nubank, but the queues make the point of going to the N26.

Another point that Nubank is champion is the service. Always excellent and grade 10.

As the N26 is a German bank, an efficient service is expected, without bureaucracy, but not as relaxed as Nubank.

I’ve never had a hard time solving my problems at N26, but the service is not as fast as at Nubank

In the most basic option of the account, the N26 does not offer telephone support, only a video call chat within the application. As a user, I am very satisfied with the service offered by N26 so far, but it is very difficult to overcome what Nubank created.

So, the point here is for Nubank and I’m hoping one day to get a treat from the company (which sent me a very cute congratulations video sung by a dog choir).

N26 and Nubank do not charge a monthly fee, although N26 offers more than one account option (with a monthly fee).

The N26 has not yet announced its price list in Brazil, so we will wait to see if it will charge for slips and TED.

Without prejudice to this, the Nubank account has an income equivalent to 100% of the CDI, therefore, being higher than the savings account, which helps to balance costs.

Here, it is more difficult to give an opinion, as we do not know the prices of the N26 in Brazil. If he launches with the same business model as in Europe, the point is with Nubank, because automatic revenue does not happen on the N26.

The biggest disadvantage of Nubank is not offering the service of free withdrawals. Brazil is a very large country with a lot of difference between the different cities. If you are only going to be in big capitals, it probably won’t be a problem. However, in Europe, many cities and establishments still have a strong circulation of cash, so often only the card is a complicator.

The N26 has limited withdrawals, four per month, which is enough for most people. It also has an ATM finder that is quite accurate and useful.

What I like most about Nubank is that money always yields more than savings. In the N26 there is no such function. So, a huge positive point for Nubank here.

The Nubank points program (Rewards) is very useful for those who use the bank as the first payment option and have partnerships with several companies that everyone likes. The N26 does not offer this option.

Another very nice feature of Nubank is the facility for donation, as you can help some very cool initiatives with a few clicks. One more positive point here!

The N26 has a feature called “Spaces” which is very interesting

You can have “compartments” within your account with several “subaccount” options. So you can organize yourself better to achieve certain goals. For those who need to organize, it is quite useful and a great tool.

The N26 also offers 4 account options, ranging from the cheapest to the premium. Costs vary (reaching up to R $ 100 in the month) and features also.

If, to be the champion, you need to beat the current belt holder, for now Nubank remains at the top of the podium and doing an impeccable job in Brazil and Latin America.

On the other hand, it is sensational to see so many good companies wanting to work in Brazil, which increases the offer of solutions. We are the winners with this dispute, and the fight remains on the field, respecting the rules of the market.

Paulo David, biweekly columnist of TecMundo, is the founder and CEO of Grafeno, fintech that offers digital accounts and electronic records infrastructure for companies and creditors, as well as partner of SPC Brasil in the construction of infrastructure for the financial market. Before Grafeno, he founded Biva, the first loan platform peer to peer do Brasil, which was acquired by PagSeguro, a means of payment company. He was superintendent of Sofisa Direto, the digital division of Sofisa bank. He worked on the teams of Pinheiro Neto Advogados and the investment manager KPTL (ex-Inseed Investimentos). He is an angel investor in fintechs in Brazil and Europe.