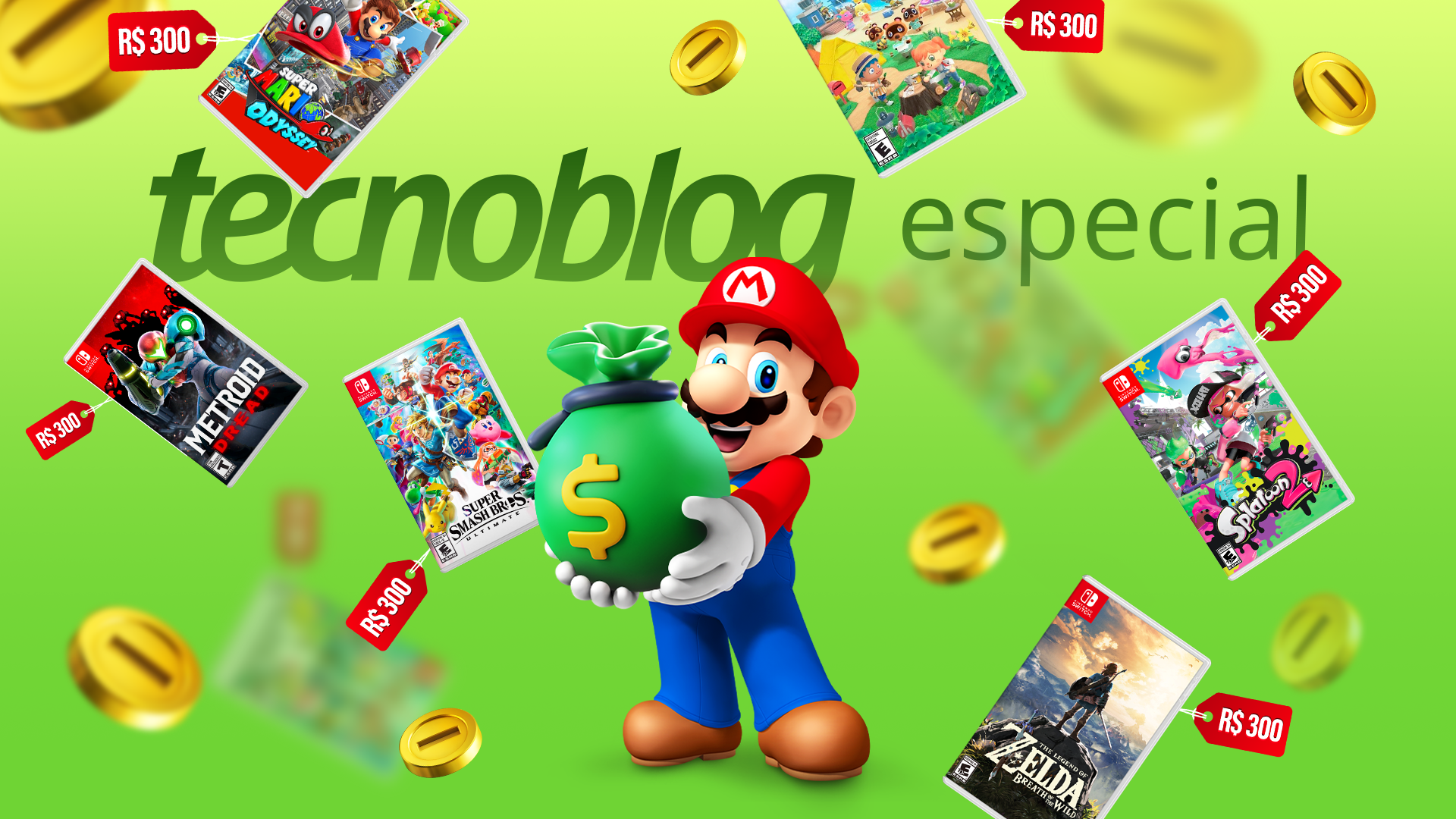 Nintendo is known for not lowering prices, nor doing frequent promotions for its exclusive games here. This business model is part of the company’s culture and works well in Japan — the birthplace of Big N. On the other hand, Western fans, especially Brazilians, do not see this practice with good eyes and often resort to illegal methods to enjoy the games, such as piracy.

Although it is quite questionable, Nintendo’s business model has reasons to be this way. There are people who defend and others who fiercely criticize the fact that the company sells 2017 games for R$ 300, almost five years after the launch – and I’m not just talking about The Legend Zelda: Breath of the Wild. This company decision has two sides, and it’s worth understanding them.

In this article, we’ll break down Nintendo’s culture to find out why the company prefers to keep the price of games high, while Sony and Microsoft run weekly promotions with aggressive discounts. The idea here is not to talk about whether someone is right or wrong in the story, but to overturn the common sense that Big N likes to disrespect its consumers on purpose.

For Nintendo, Japan is always first

First of all, it is worth explaining that Nintendo is a traditional company in Japan, with missions, visions and values ​​based on Japanese culture. Despite Sony having the same origin, the owner of the PlayStation is increasingly “westernized”, and this directly influences the business model of each of the video game giants.

In Japan, the culture of immediacy is very strong. Several videos spread over the internet show the huge queues that form in front of video game stores when consoles or much-anticipated games are released. The channel Ruptly, for example, published a recording made in the city of Tokyo, the day the Nintendo Switch hit stores.

Nintendo is aware of this immediacy of the Japanese and, therefore, tends to respect people who leave their homes to be the first to buy a product. In the book Ask Iwata — which brings together thoughts and quotes from one of Nintendo’s most iconic presidents — former CEO Satoru Iwata shares his thoughts on the matter:

“Once a piece of hardware is released, the price is gradually reduced for five years until demand has run its course. But since the demand cycle never fails, why bother bringing the price down this way? My personal take on the situation is that if you lower the price over time, the manufacturer conditions the customer to wait for a better deal, something I’ve always found an odd approach. Of course, that doesn’t mean I’m against lowering prices entirely, but I’ve always wanted to avoid a situation where the first people to speak up and support us feel punished for paying too much, muttering, ‘I think this is the price I I get paid for being first in line.”

Despite using hardware prices as an example, the same rule applies to games, which also don’t get cheaper over time — and can even get more expensive. In the Japanese eShop, today, The Legend of Zelda: Breath of the Wild can be found for 7,679 yen (about US$67, or R$372 in direct conversion). At the time of the game’s release in 2017, Nintendo charged 6,980 yen ($61).

For us Brazilians, this business model doesn’t make any sense. Meanwhile, the Japanese accept the higher amounts without question, as they know that as long as a game is selling well, Nintendo will not lower its prices, and that is unlikely to change in the next few years.

Prices in Japan are not fixed as in the West

In order to better understand how the Japanese consume video games, we talked to a person who breathes Nintendo, produces specialized content about the company and has lived in Japan for five years: Rodrigo Coelho — owner of the Coelho channel in Japan, on YouTube. In our chat, Coelho explained how game pricing works in the Land of the Rising Sun:

“There [o preço] it’s decided much more by the publisher, even within the same console, and by the game itself. For example, you usually go to the US to buy a recent game and pay $60 or $70. In Japan, no. When I went to buy the PS4 there, I wanted to get the Monster Hunter World, and it was 2,000 yen more expensive than other games from the same era. As an approximation, instead of the game costing $60, it cost $80. In Octopath Traveler, which was exclusive to the Switch, Square Enix knew about the hype for the game. For referring to Final Fantasies antiques, which are part of Japanese culture, the publisher sold for $78 instead of $60.”

Coelho also said that the Japanese do not usually ask for discounts or haggle. When they want to buy a cheaper product, they turn to the used market. If they go to a store to buy any game, the Japanese people know they will pay the original amount, and that’s not a reason to complain there.

In Japan, people live with scarcity on a daily basis. Hence, there is an urge to buy things as quickly as possible. Also, the Japanese highly value limited items and collectibles, so physical media games are still fan favorites, and stores know that. About the devaluation of games, Coelho said the following:

“Devaluation does not happen at the request of publishers [japonesas]. Here in the West, the publisher decides to lower the price of the game right on the shelves. In Japan, I see this happening as the stores want. Publishers ship games at a certain price, and Japanese is very cautious, so deliveries are small so items can be sold and replenished later. So they don’t have to collect anything.”

Demanding price reductions in Brazil “is a losing battle”

By having a business model based on Japanese culture since its origin, more than 130 years ago, Nintendo will not change its philosophy overnight. We Westerners need to begin to understand this, even to avoid possible premature hair loss or stress heart attacks.

Here in the editorial technoblog we have Ricardo Syozi — a Nintendo fan for over 30 years who shares this same thought. In Syozi’s view, liking Nintendo products as a Brazilian is a losing battle, and the company has complete freedom to do so, unfortunately.

“I’m 37 years old, and I’ve been wanting a game at a lower price for 30 years. For Nintendo, cutting the price of a game is the same as devaluing it. The company’s intention has always been to work with immediacy. Obviously she won’t say this openly, but it’s not something new and it won’t stop “, commented.

Syozi also took the opportunity to remember that, as nice as it is to have cheaper games, video games have always been luxury hobbies. Nowadays, there are more affordable ways to play, such as waiting for promotions or subscribing to services like Xbox Game Pass. In the case of Nintendo, however, there is nowhere to run, because the company will always put the Japanese first.

“I’ve been buying Nintendo games with my own money for about 19 years, since the GameCube days, and it was already very expensive. Brazilians always wait for the best moment to buy at a discount, but I’m not like that anymore. I grew up on this wave of gaming that doesn’t come cheap. As a consumer, it’s a losing battle. I think it’s cute when we go to Twitter to do our campaigns and upload hashtags for Nintendo to lower prices, but her main audience is Japanese, and she’s always embraced that idea. The American, the European… they are important, but Nintendo’s domain is Japan. And since it’s a culture of Japan, it’s no use for me, Ricardo, a Brazilian, resident of São Paulo, to think I could change that”.

Syozi concluded by reinforcing that there is no villain in this whole story. “This is all Nintendo’s and the consumer’s fault. Because if nobody bought it, Nintendo would lower the prices, but then the company wouldn’t create the games we love so much either. Big N will only give in and make a subscription system or give more frequent discounts when the market forces it to do so”, he said.

Despite accepting reality, both Syozi and Coelho still want Nintendo to look at other countries with the same affection it looks at the Japanese. After all, franchises like Mario, Zelda, Pokémon e Kirby are very successful all over the world, not just in Japan. As an example, Coelho cited a recent case involving Russia:

“Nintendo announced a few months ago that the company had started different pricing in Russia. They analyzed the Russian market and realized that, in order to sell better there, it would be necessary to lower the prices of games, consoles and accessories. I would like them to do the same here in Brazil, because it is impossible to compare our reality with those of other countries”.

Meanwhile, Syozi also wants to see cheaper games one day, but knows that may never happen.

“I would like Nintendo to lower prices, look at Brazil and translate the games into Portuguese. But it is not her obligation to do this, because she is a company. Who knows the obligations of a company is itself and its investors. Who am I to say what she has to do? It is complicated”.

Do you, reader, think that Nintendo will start thinking outside the Japanese box someday? Share your opinion with us in the Community of technoblog!