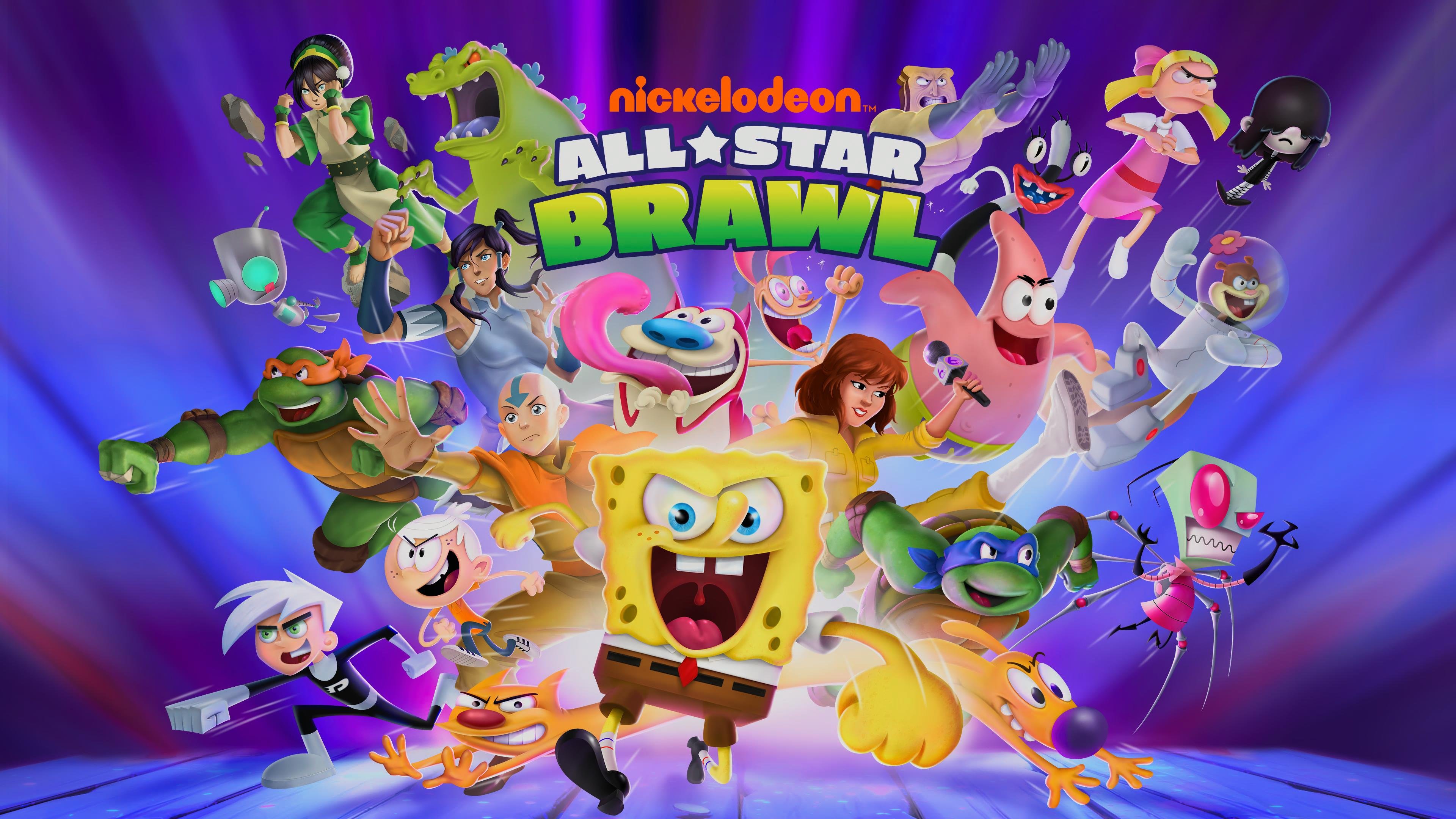 There’s no denying that Nintendo owns the most influential gaming franchises, which have set trends in the industry since the days of the NES. Such as Mario Kart represents a revolution for racing titles, Super Smash Bros. was a game changer in fighting games, placing its iconic pets in small battle arenas whose objective is not just to reduce the life bar of opponents, but to knock them off the stage.

While Street Fighter, Tekken, Mortal Kombat e Dead or Alive required complex combinations from the player, Super Smash Bros. reinvented the wheel with accessible combat, that is, less technical, in which you can deliver neat combos with just a few buttons, thus eliminating the arduous task (for me at least) of memorizing moves. At a time when fighting game developers prided themselves on their difficult-to-digest mechanics, Nintendo’s brawler went against the grain in order to bring a balanced experience, inviting both novices and hard-nosed virtual brawlers.

True to the premise of Smash, Nickelodeon All-Star Brawl is, for better or worse, a “xerox” of the franchise that influenced him, putting the characters of his brand, one of the main entertainment brands, to take a hit. Generally, All-Star Brawl works well, but its many limitations — the result of a lower production value — as well as its need to replicate Smash even in the smallest details, they prevent you from taking higher flights. the similarities with Smash, in fact, are everywhere, from the voice of the narrator and in the way he presents events to menus and visual details. Check out the full review.

Cast the first stone for anyone who has never felt a pang of nostalgia when seeing Nickelodeon characters on a game screen, right? Regardless of the generation, the fact is: SpongeBob SquarePants, Rugrats: the Little Angels, Ninja Turtles and “vatar: The Legend of Aang they were part of all of our lives, either directly or indirectly.

Seeing many of the characters that accompanied us throughout childhood going to the punch (without losing friendship) arouses the same fascination as when we saw Nintendo’s mascots get hit for the first time in Super Smash Bros., there on Nintendo 64. All-Star Brawl they provide hilarious moments capable of eliciting smiles from children and adults, valuing the lightness and humor characteristic of Nickelodeon’s productions.

Although the feeling of nostalgia plays in my favor, right away I already have a caveat to highlight here: the list of characters is quite limited, especially when we draw a comparison with the colossal cast of Super Smash Bros. Ultimate, an example to follow with almost 100 playable names including DLCs. Here we have the presence of Bob Esponja, Sandy Bochechas and Patrick, the trio of the design starring Calça Quadrada, Michelangelo, Leonardo and April O’Neil from “Ninja Turtles”, as well as representatives from The “Legend of Korra”, “Ren & Stimpy ”, “Invader Zim”, “The Thornberrys”, “Aahh!! Real Monsters”, “The Loud House”, “Rugrats: The Little Angels”, “Avatar: The Legend of Aang”, “CatDog”, “Danny Phantom” and “Hey Arnold”. Ufa!

As much as many of the Nickelodeon series are represented, there is no way of knowing for sure the criteria that Ludosity and Fair Play Labs (the two studios that developed the game) used to compose the cast. It is difficult to understand why they chose Helga Pataki, for example, from “Hey Arnold”, instead of the protagonist himself, the anvil head; or Nigel Thornberry, the father of the family, rather than Eliza, heroine of “The Thornberrys”. 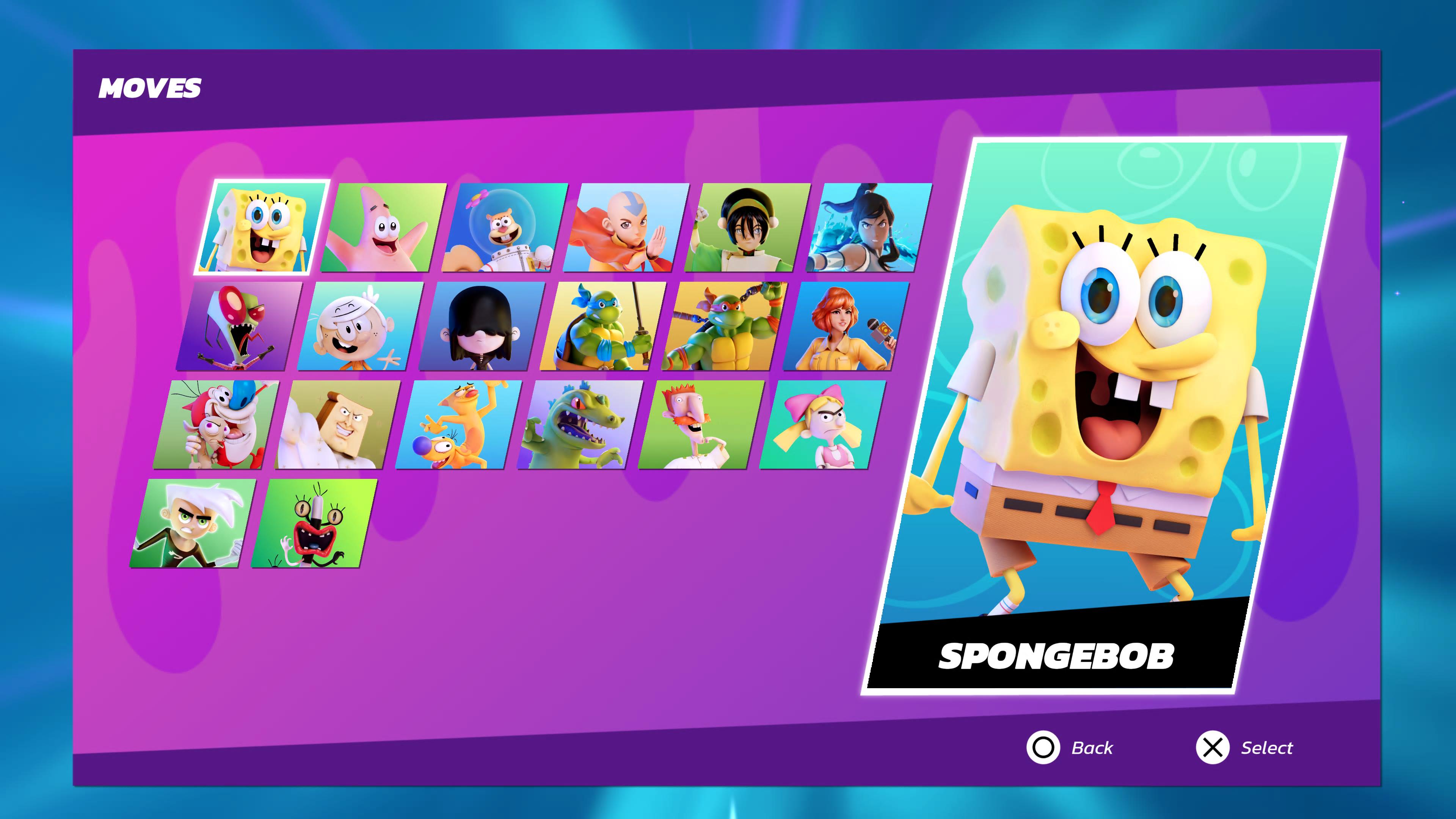 I confess that I missed not only other protagonists, but also some franchises shown by Nick that are as famous as the ones that were added to the title, such as “Rocko’s Modern Life”, “Doug” and “Rocket Power”. In a brawler who doesn’t hide his influences in Smash, it is essential that there is a cast to match, both in volume and quality — and All-Star Brawl, in my opinion, does not stand out in either of these two aspects.

If there’s one thing that makes the experience more enjoyable and nostalgic, it’s gameplay. Nickelodeon brawler combat is competent enough to keep the player committed to learning and mastering the techniques of 20 fighters, each with a specialty. Although it doesn’t have the “weight” and impact of the blows of Smash, I can assure you that there is a lot of fun in the fight mechanics.

The dummies have light, heavy and special attacks, with variations in running and in the air, which can change depending on the combination you perform with the directional pads. Although each character has an odd list of moves, the attack buttons to be combined are always the same, no matter the choice. I was positively surprised by the diversity of abilities, which contributes to making the heroes very different from each other. 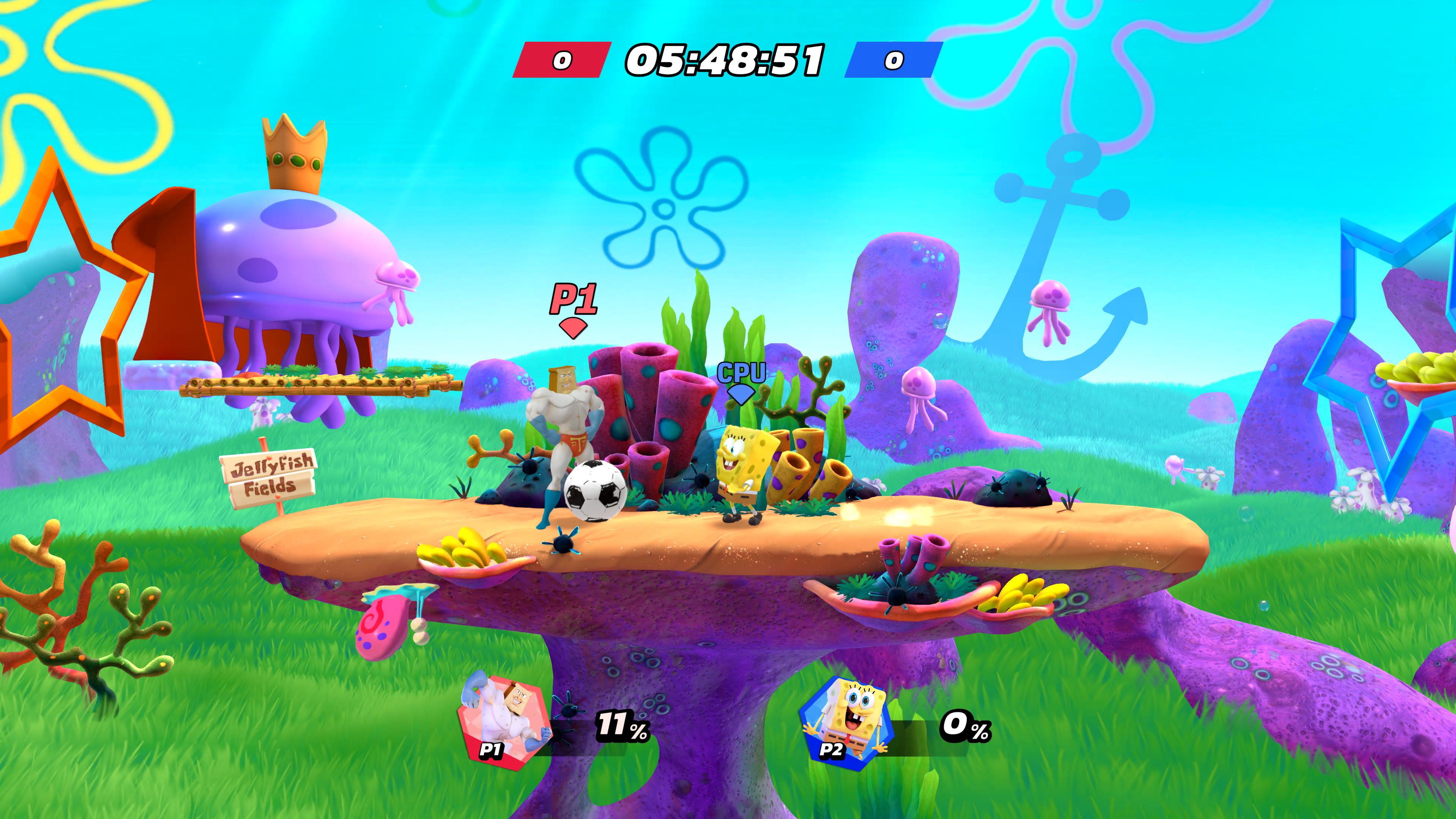 Despite the absence of tutorials popping up on the screen, the game delivers a training mode in which you can practice with NPCs of different difficulty levels, as well as a list detailing the competitors’ specific moves, very useful features for first-timers. To players who are already familiar with Super Smash Bros. Ultimate: Jump straight into the gameplay, you’ll feel right at home.

Rice and beans and nothing else

Even though it offers a fun and accessible combat system, it can also be complex for those seeking depth, All-Star Brawl it drops very fast in repetition, precisely because it doesn’t have modes to sustain this great gameplay. You can adventure through the classic arcade, which has five difficulties, facing opponents in sequence until reaching the final boss — one of the achievements, by the way, requires that the arcade mode be completed with all the heroes, which presents a considerable challenge to the player with completionist spirit.

In battle mode, the most casual, we only have three options: the “Stock”, in which the number of lives is limited, the “Timed”, in which you have to defeat your opponents within the time limit, and finally , sports fights, whose objective is to hit a ball on the target, in the “goal” of the rival team. 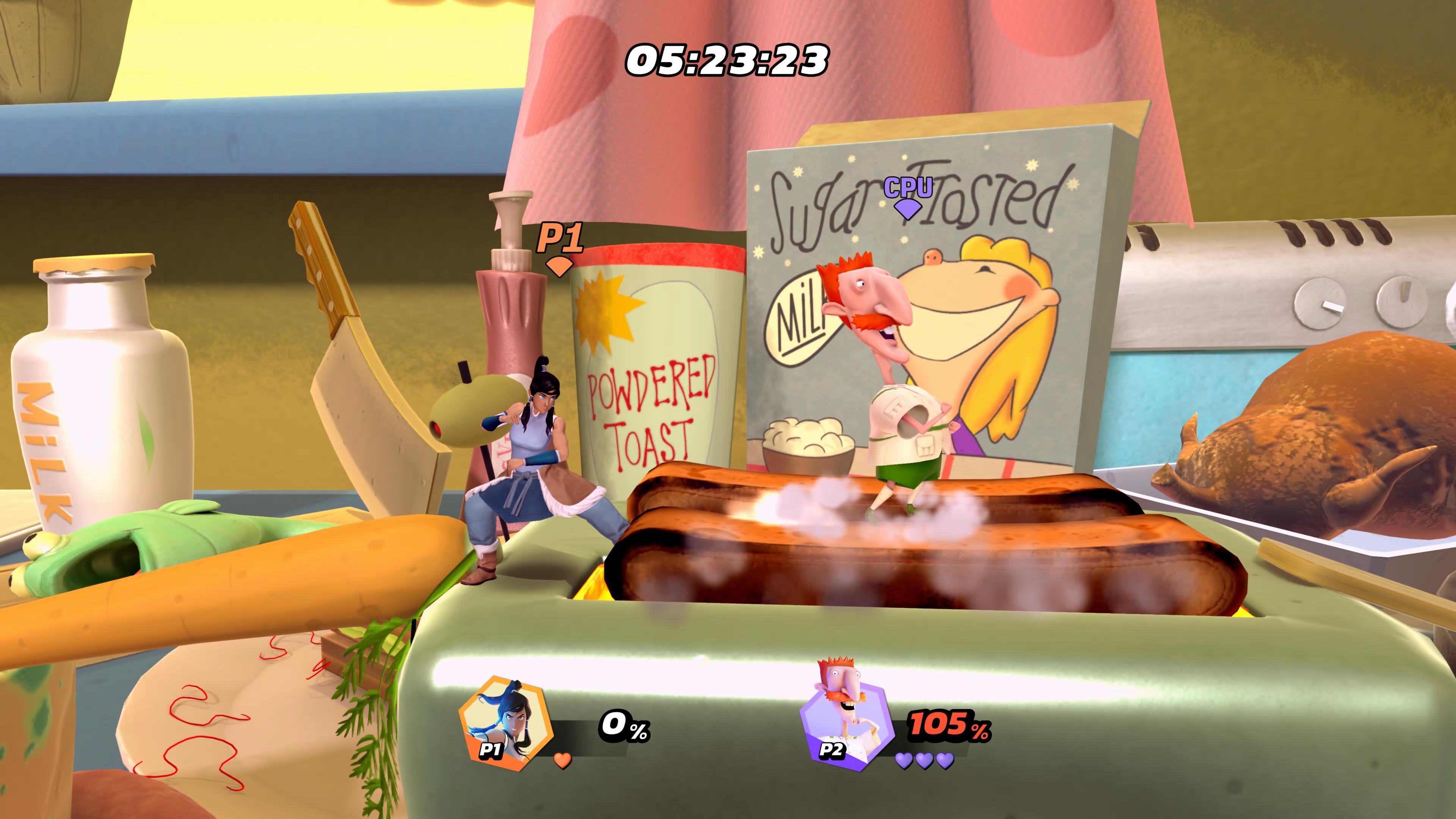 In fact, all of these modes I mentioned above are great if you’re together, having one or more friends by your side to complement the game. However, it is difficult to recommend them to those who want to play alone, because there are almost no customization options. Treat the title as a party game that this hole in the modes will not compromise your experience as much. The more than 20 playable maps, one per character, even soften this caveat in terms of content.

The online mode, in turn, brings both casual and competitive modes, but still suffers from server problems almost a month after its launch. In addition to the ping being high in Brazil, there are frequent disconnection problems and an excessive delay in searching for matches. The way multiplayer is today, you’ll be more angry than fun.

And about the look, I liked how the game transposed the familiar names of the drawings to 3D, standardizing different lines, from different studios and artists, to a single aesthetic. It is also necessary to highlight the whim that the developers had when it came to recreating the most striking environments of each series, from the Loud’s house to SpongeBob’s jellyfish fields. In one of my favorite stages, the Ren & Stimpy stage, the wrestlers face off at a kitchen table, complete with a cereal pool in the center in the best “Honey, I Shrunk the Kids” style. 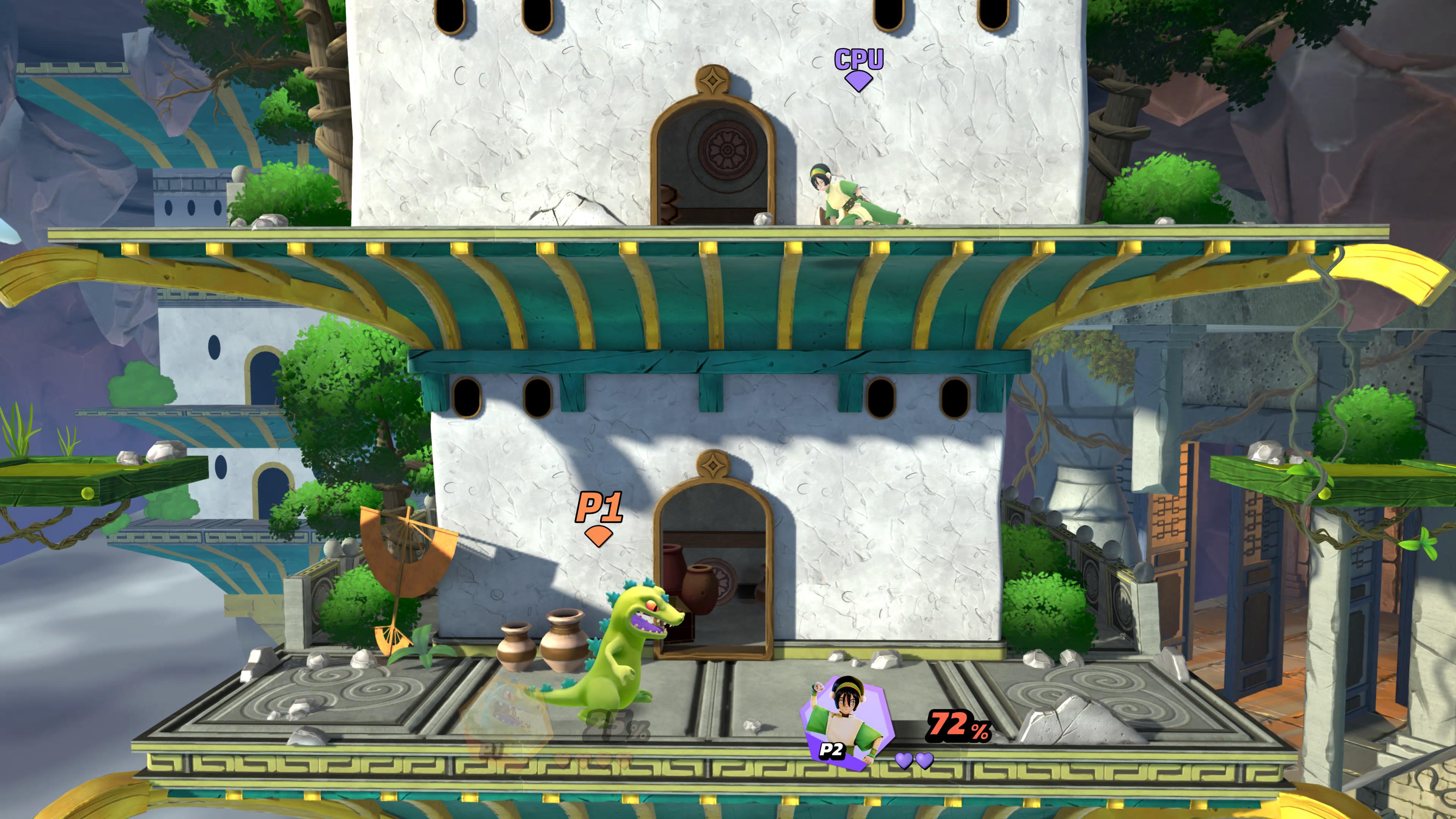 Inspired by the brawler model of Super Smash Bros., Nickelodeon All-Star Brawl is a good pastime, especially for those looking for an uncompromising fighting game, with a party game structure. It doesn’t live up to its source of inspiration in any way, but at least it carries the charisma of the Nickelodeon series and delivers simple, pleasant, and functional combat. Whenever you can, play together to maximize the level of fun.