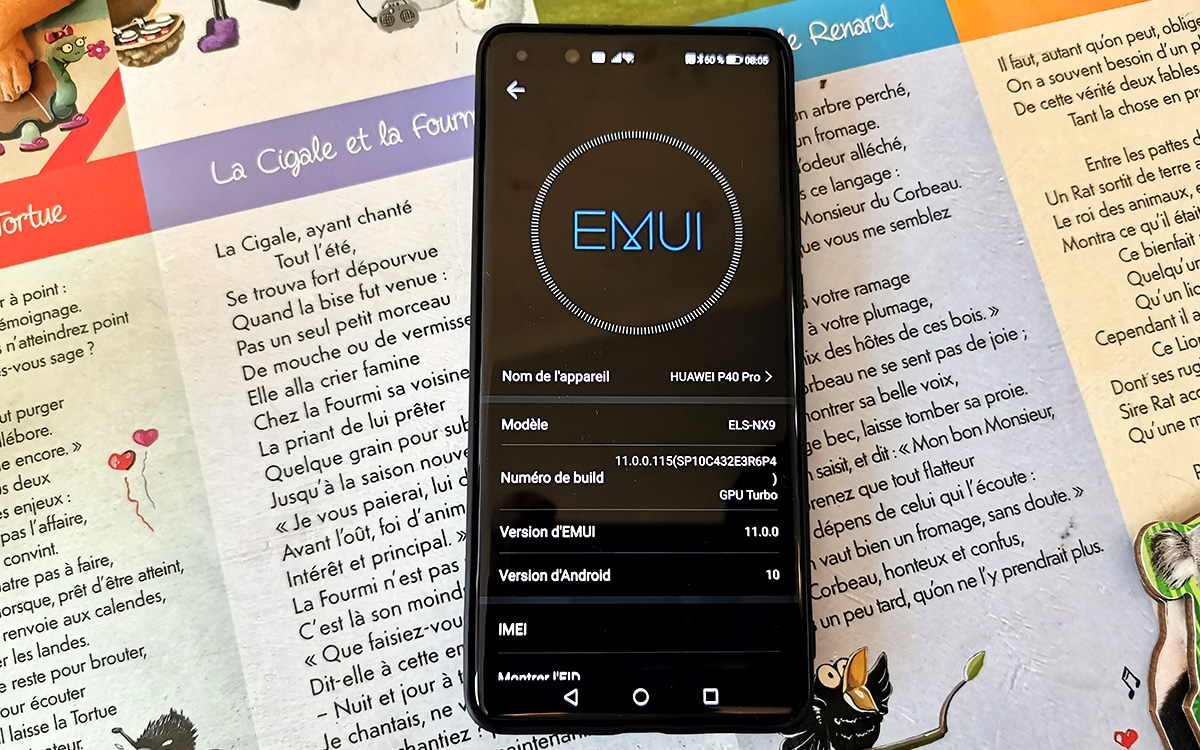 EMUI 11, the new interface for Huawei smartphones, is finally formalized. Like every year, it brings a whole lot of relevant novelties. Currently available in beta test, we were able to play around with it. To learn all about EMUI 11, this is where it happens.

Sometimes called fork, overlay or simply interface, a “customized” environment is present on all Android smartphones, with a few rare exceptions. On the Samsung side, we find for example One UI. At OnePlus, it’s OxygenOS that thrills all of the brand’s smartphones, while at Xiaomi, we take advantage of an interface called MIUI. Each of them offers many features that are not found on stock Android: they allow you to customize the environment, use the specific components of a smartphone model, etc.

Intended for Huawei smartphones and tablets, EMUI is the interface specific to the Chinese brand which is experiencing so much trouble these days. Despite the ban on doing any kind of business with Google, and the resulting restrictions on Android and Google Mobile Services, Huawei is not forgetting its users. The brand continues to improve its overlay and now offers it in version 11 for its devices. EMUI 11 therefore arrives ! We have already had the opportunity to test it, so we take stock of all its new products, its availability date and the models that will be able to benefit from it.

When is EMUI 11 released?

The new interface is already available to beta testers. Looking at Huawei’s usual schedule, the finalized version is expected to roll out across all compatible smartphones by the end of this year / early next year.

Which smartphones are compatible with EMUI 11?

Currently, only a few devices are compatible with the EMUI 11 beta. Here is a list:

Huawei has made it clear to us that only these devices are suitable for the beta of EMUI 11, and no other for the moment. On the other hand, one can reasonably hope that other models of smartphones will benefit from EMUI 11 once the overlay is fully finalized. Let’s keep our fingers crossed that the P30 range (for example) will soon benefit from the new interface. 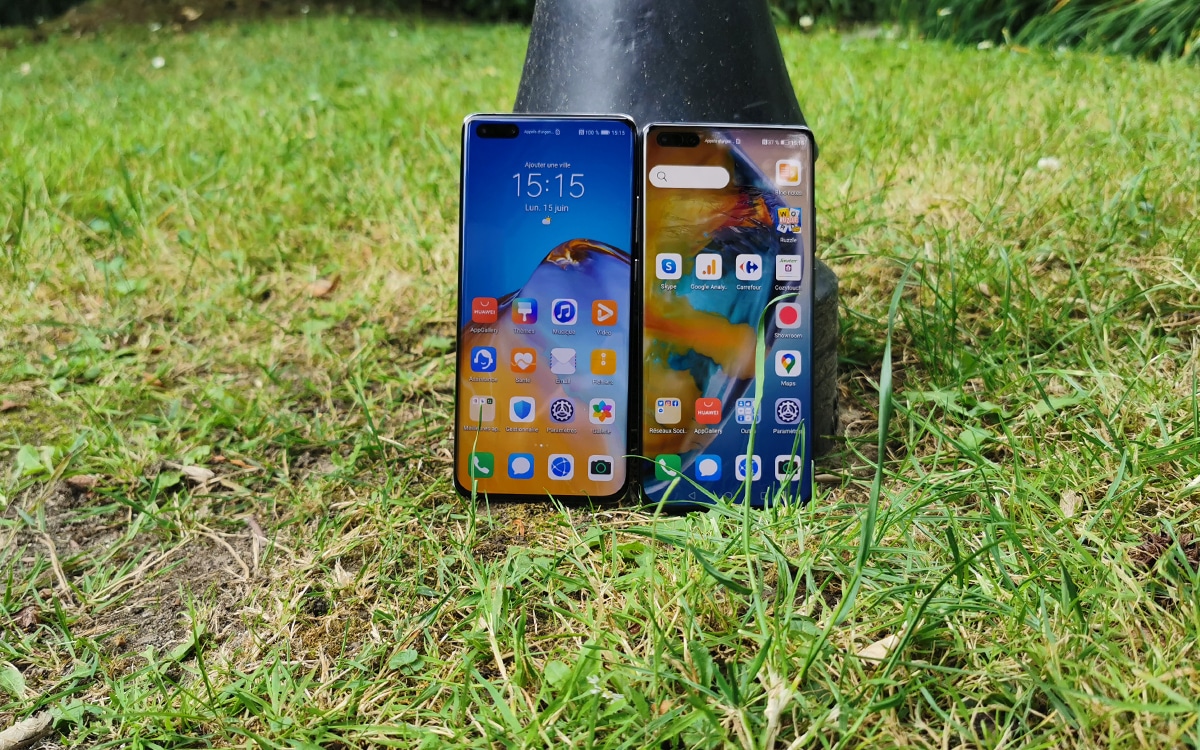 An interface based on Android 10

While Google has just announced the availability of Android 11 in a finalized version, the question arises: is EMUI 11 based on the very latest edition of the OS from Google or has Huawei been forced to turn to the side of the old version? The answer may not please those who hope to benefit from the many innovations brought by Android 11 on their Huawei smartphone: whether it is the beta version or the finalized version, EMUI 11 is based on Android 10. Why such a choice, when Android 11 has been available in beta for several months and the finalized version has just been released?

A few days before the final release of Android 11, we asked Huawei the question, and got the following response: “Android 11 is currently in beta. It is not finalized, so we have fully developed the new version of EMUI on Android 10. The final release of EMUI 11 will also be based on Android 10, we do not intend to redevelop everything. We will therefore have to wait for the next version of EMUI to take advantage of Android 11. “

This choice remains surprising since at the same time last year, Huawei was already starting to release a beta-test version of EMUI 10 … on Android 10. A timing problem, is it of course?

AOD mode (called Screen Theme Off on Huawei phones) has been added with a small feature that allows you to better customize the screen display. You can now integrate an image, video or animated GIF into this screen. If Huawei offers certain images by default, it is possible to add your own photos or videos.

To access this new feature, all you have to do is go to Settings, then select Home screen & wallpaper options> Off screen theme. 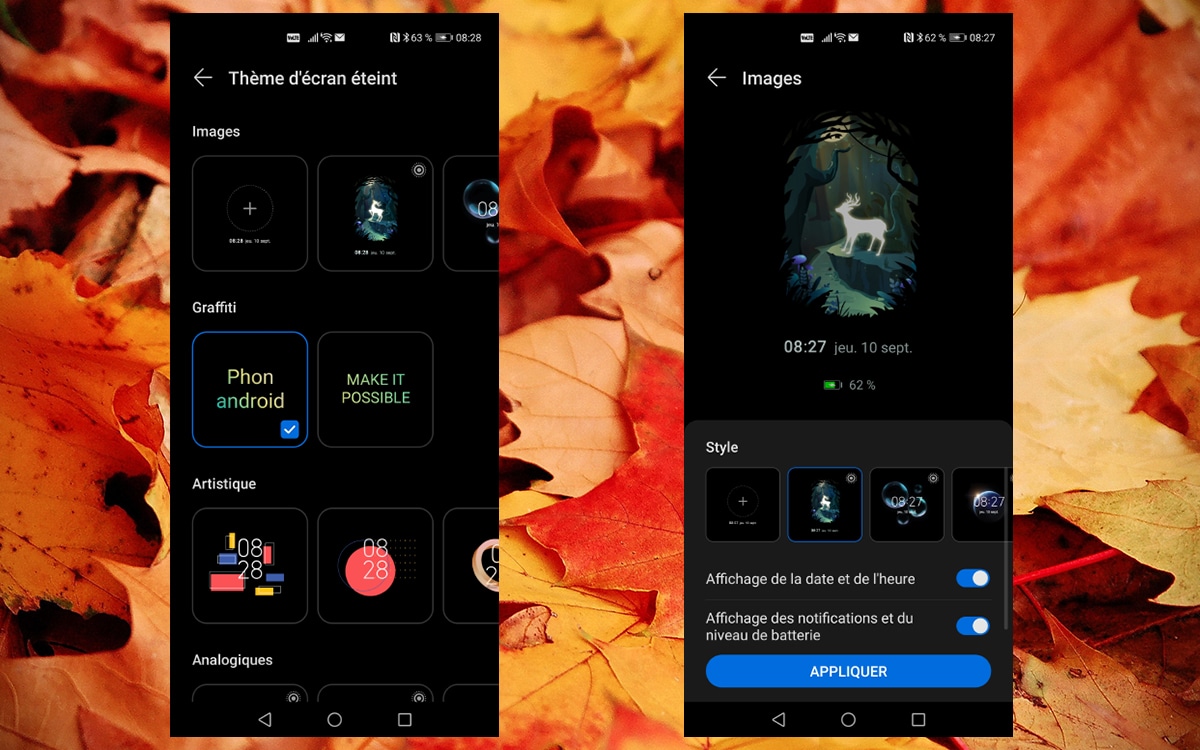 The Gallery application is enriched with a little novelty

The Gallery app is getting better: Albums now have a new 4: 3 display mode. Huawei also explains that the Photos tab now has a view mode by month or by day (pinch the screen with two fingers, as you would zooming in or out of a photo). For our part, this feature was already present on older versions of EMUI and the Photos app.

Huawei has optimized its system dedicated to animations, this time taking into consideration “the human factor”. This makes transition animations smoother and more subdued, so they don’t distract the user when something is moving on the screen.

With EMUI 11, no less than 17 icons benefit from a new look and new animations. Among them are the 5G icon, microphone, dial icon, night mode, etc.

Vibrate mode synchronizes with the ringtone 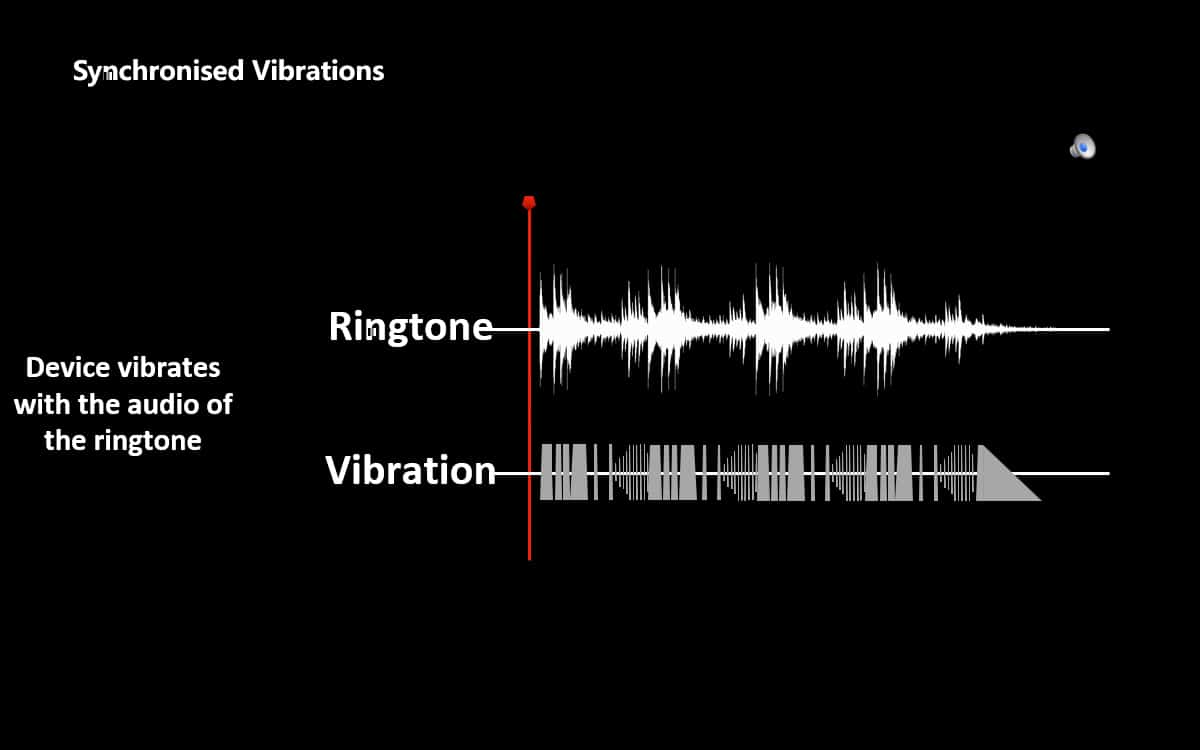 As Huawei describes, Multi-Window makes it “easy to multitask with floating windows, screen partition, or a combination of the two.”
With EMUI 11, developers have redesigned the way applications can be displayed next to or on top of each other. Until then, under EMUI 10, it was possible to place an application in a window, rather than displaying it full screen. Enough to offer the user a multi-window mode and allow him to perform several tasks on the screen. On the other hand, it was not possible to make one application appear superimposed on another, without hindering the use of the one below. 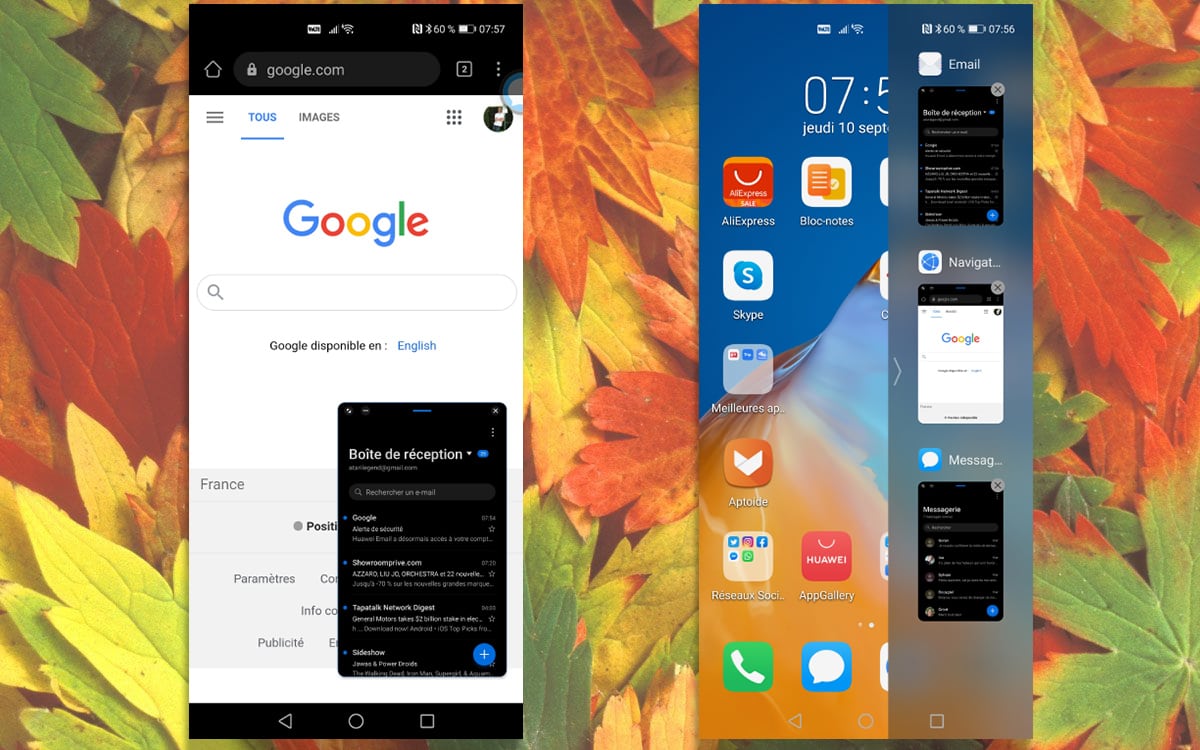 Huawei has finally found a solution to this thorny problem: it is now possible to display an application like the one dedicated to SMS in a small discreet and half-transparent bubble. Therefore if you are playing, it is possible for you to consult all your messages without interrupting your games. And you even have a way to reply to the message you just received, even the operation requires good eyes and a little dexterity.

Second new feature: it is now possible to adjust the display size of an application in windowed mode. To do this, just press one of the left or right angles at the bottom of the application window.

Here again, with EMUI 11, Huawei is refining features already present in the previous edition of its overlay. Thus, the Multi-screen Collaboration mode is now in version 3.0 and can now display several windows from the smartphone on a single screen of a PC.

For example, you can start a video and open your browser on your Huawei phone, and have the two applications appear in two separate windows on your computer.

Note that this feature is exclusive to Huawei PCs, in this case the MateBooks. 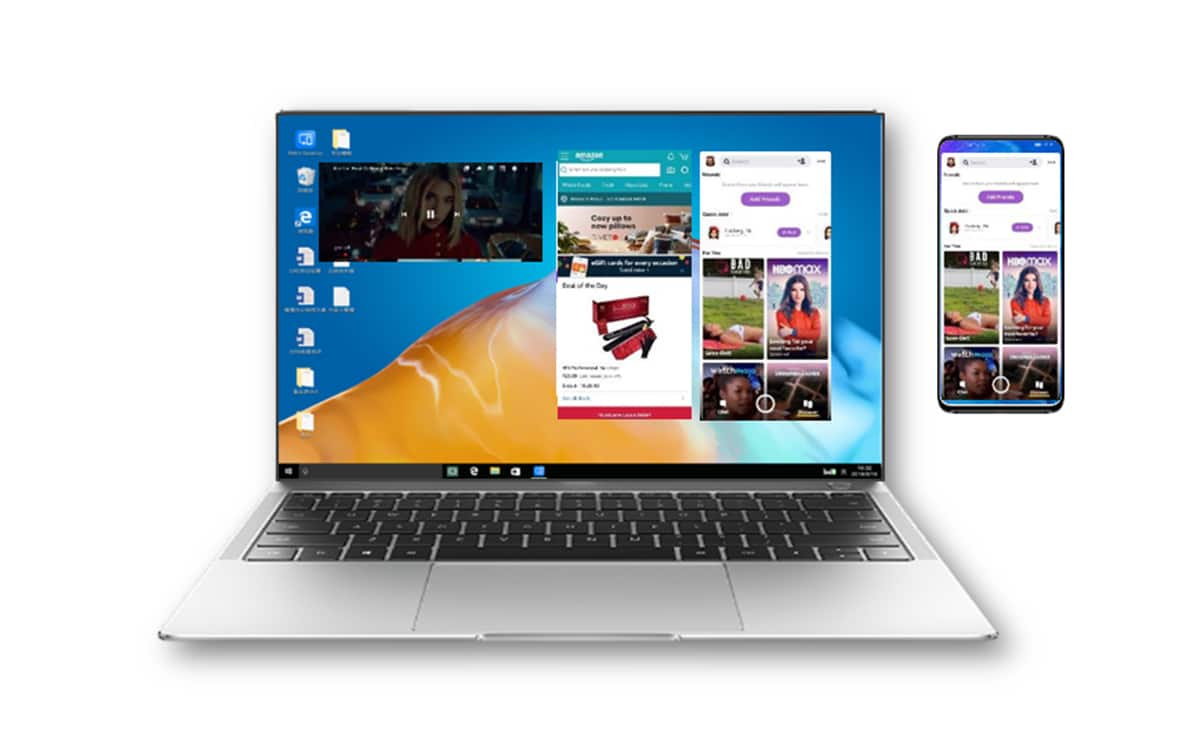