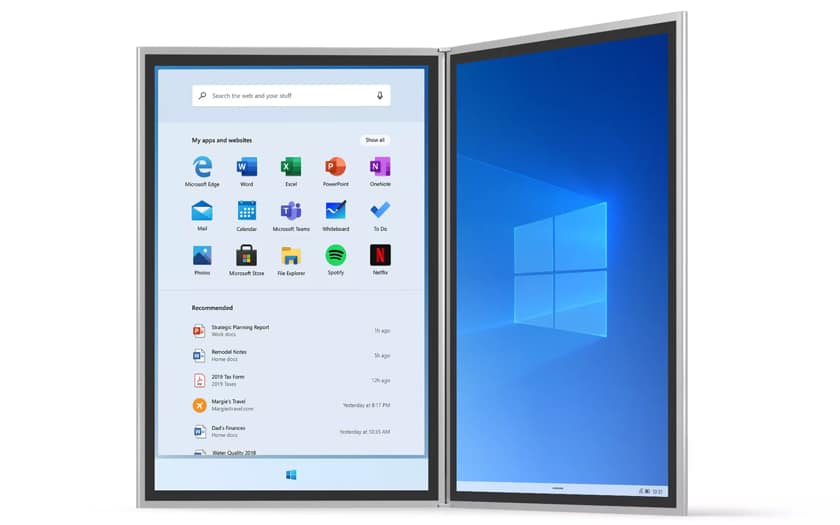 It was during its major annual conference, normally intended to unveil its new hardware range, that Microsoft took the opportunity to present its new operating system: Windows 10X. New Start menu, compatible hardware, availability… We take stock of this new OS.

We learned at the beginning of the month, Microsoft made it official: its new operating system for foldable tablets is therefore called Windows 10X. For now, it doesn’t seem like it’s intended to replace the traditional Windows 10, but rather establishes itself as a variant of the OS. Initial information suggested that Windows 10X would be dedicated to dual-screen devices, like the future Surface Neo.

This tablet with two screens, by its shape and its uses, had to have a somewhat special version of Windows 10, and so this is what Microsoft developed. Concretely, Windows 10X had been developed to multiply the potential of Dual Screen technology. In fact, the OS is designed to make it easier to switch from one screen to another, or conversely to extend the display of the two panels to make only one.

However, the global pandemic has forced Microsoft to review its strategy for the launch of Windows 10X and the Surface Neo. Thus, their release is postponed to 2021, without further details. In addition, Windows 10X is no longer just for dual-screen devices, but this time is limited to computers with a single screen. According to Microsoft, however, this new OS could make its way to dual-screen devices later, without giving more information.

As said before, Microsoft had to change its plans due to the health crisis. While a launch was expected by the end of 2020, it will probably be necessary to wait until 2021 to see the new OS land. The Redmond firm has decided to launch Windows 10 X as a priority on laptops with a single screen.

Rather than promoting devices with a new screen format, Microsoft preferred to play it safe by reserving Windows 10X for PCs with a single screen. The uncertainty over the commercial success of dual-screen devices has likely cooled the US giant. However, certain features specific to Windows 10X could be integrated upstream into Windows 10. These features could in particular be found on the Surface Duo, the release of which is still scheduled for the end of 2020.

Note that the pandemic was not Microsoft’s only problem. Indeed, the development of Windows 10X has been particularly slowed down because of performance and compatibility concerns regarding Win 32 applications. In this regard, Microsoft has indicated that Windows 10X will not be able to read Win 32 applications locally. However, users will be able to stream them from the cloud, which means an internet connection will be required to launch these apps.

Windows 10X offers a Start menu that has definitely changed

In Windows 10X, the Start menu has a new look. Intuitiveness is at the center of navigation. Thus, this new generation Start Menu is made up of three distinct modules:

Other change: dynamic tiles have given way to classic icons. The application launch icons are topped with the search box, while at the bottom there is a list of “recommended” documents, applications and websites.

As an extension of the redesign of the Start menu, the taskbar is also entitled to a small facelift on Windows 10X. So the shortcuts are now centered, surrounded by the Start and Task Views buttons. Note the integration of the Action Center, instead of the notifications area. In this tab, the user will be able to access various quick settings: management of Internet and Bluetooth connections, volume management, access to a player dedicated to music, notifications module, and information related to the state of the battery.

This is a significant feature of Windows 10X. Indeed, Microsoft promises a whole new experience of installing updates, thanks to welcome structural changes. The update process has been completely revised by the manufacturer. Thus, the bets will install in less than 90 seconds on Windows 10X.

The company has opted for OS segmentation by separating system files and components from drivers and applications. By doing this, most of the installation takes place in the background, allowing the user to reboot their system to the latest version very quickly.

When and on which devices can we benefit from Windows 10X?

Microsoft has announced it: Several manufacturers are already in the race to integrate Windows 10X into their devices. Four of the world’s largest PC manufacturers are currently developing models that will ship Windows 10X. It is Dell, Lenovo, HP and Asus. Note in passing that the devices planned by these manufacturers, whether they are computers or tablets, will in fact be PCs based on Intel x86 processors.

Only and initially, Windows 10X will run exclusively on machines reserved for education and / or the professional world. Still, visuals released in April 2020 hint that Windows 10X could run on full-size tablets as well, like Microsoft’s upcoming Surface Hub 2. In the end, Windows 10X could be made to run on a much more diverse fleet of devices than Microsoft initially determined.

Currently, there is no way Microsoft is going to end Windows 10, far from it. According to its schedule, the Redmond publisher is already planning new editions of the operating system until the second quarter of 2020, when Windows 10 20H1 will be released. On the other hand, we can assume that Windows 10 is approaching Windows 10X, or even that the two merge. Last July, Microsoft had mistakenly released a preview of Windows 10 that had the new Start menu. The company had quickly withdrawn it from circulation. From there to think that most of the functionality of Windows 10X will also be integrated into Windows 10, there is only one step.