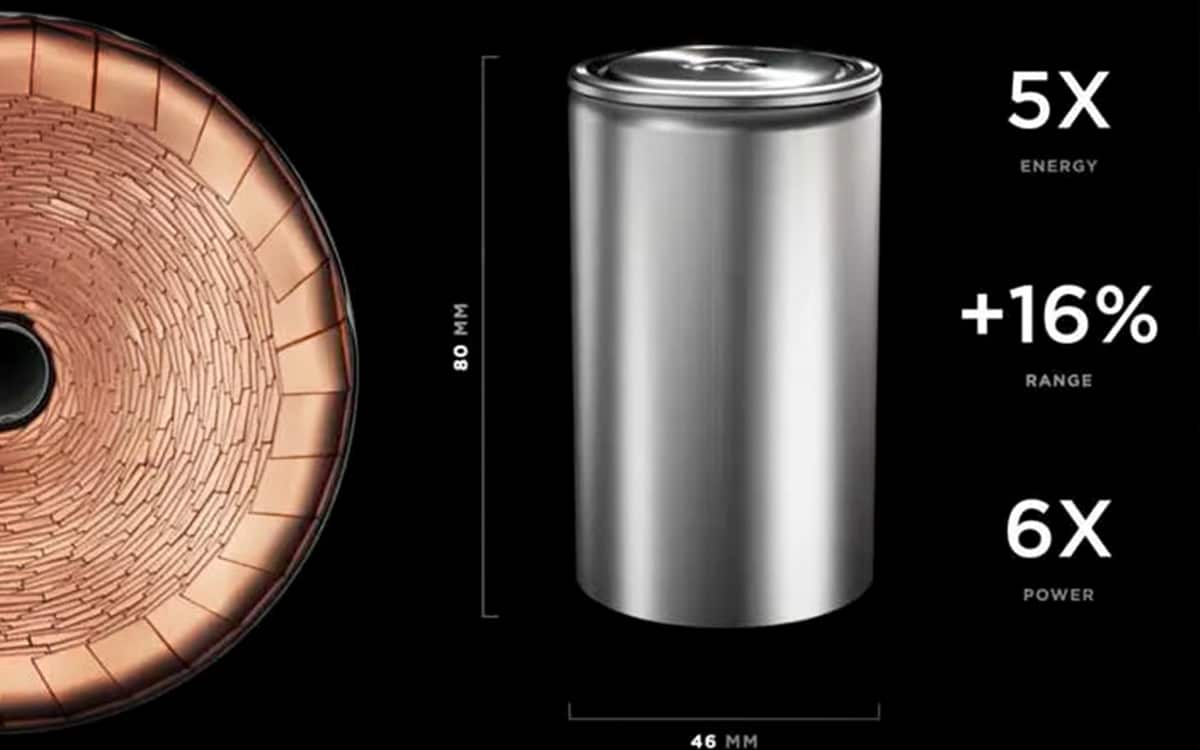 Tests conducted by an organization funded by Tesla conclude that the new 4680 batteries have an exceptional lifespan. Some cells can withstand more than 15,000 charge cycles, or the equivalent of 3.5 million kilometers. An essential prerequisite for launching the “Robotaxi” autonomous taxi service.

A durability study around the new Tesla 4680 batteries shows that these brand new cells have a durability which was hitherto unknown for Li-On cells. These new accumulators, which are denser in terms of energy density can withstand up to 15,000 charge cycles without significant loss, for a life of 3.5 million km. Much more than the lifetime allowed for a vehicle regardless of its engine system.

The teaching of this is that 4680 batteries are ideal for electric vehicles: the degradation of their capacity does not decrease significantly up to 15,000 cycles if the battery is not completely discharged. According to the researcher’s tests, these batteries have an optimal performance when the consecutive discharges remain between 25% and 50%. This corresponds de facto to a classic use profile for an electric vehicle.

The Electrek site thus gives a typical case: for a Tesla with a range of 480 km, if you do about fifty kilometers every day and you keep the battery level between 70% and 80% the battery capacity will not degrade. Tesla announced the new type of 4680 batteries in late September. The idea was initially to reduce costs with a new method of seamless design, while resulting in a cell that is less likely to generate heat during charging.

Tesla also changed the size of each cell, before finding an ideal balance. The new 4680 cell (which bears this name because of its dimensions, 46 mm x 80 mm) continent 5 times more energy and 6 times more power than previous batteries. By assembling these cells into a complete battery system for electric vehicles, Tesla says it is now possible to increase total range by 16%.

The revolution is already announced

The advantages are also industrial. A single production line can now produce the equivalent of 20 GWh of batteries, which is 7 times more than current technology. Enough to allow the manufacturer to achieve, by 2030, an annual production of 3 TWh against 100 GWh currently. On top of that, Tesla plans to use these batteries simultaneously as power sources and structural elements in future vehicles. What to deliver in the long term even more autonomy by reducing the weight of the cars.

One big question remains: what can be such a long battery life in an electric vehicle? Jeff Dahn evokes several avenues. The first is the “Vehicle-to-grid”. To understand the value of this, you have to imagine the millions of electric vehicles that could act as batteries for the electricity grid when parked. This would smooth the load on the network, and allocate part of the energy available in its batteries to charge higher priority vehicles (eg school buses) at certain times of the day.

Tesla had long refused this possibility because of what it would have involved in the lifespan of vehicles, but this new technology could change everything. A Tesla engineer has already mentioned chargers that would work in both directions. Another possibility mentioned by the researcher is recycling: the batteries could be extracted from old Tesla to find a second life. Finally, it’s hard not to imagine this type of technology as the sine qua non for the future Robotaxi service that Elon Musk wants to launch in the long term.

The idea would be that owners of certain Tesla (Model Y and 3 for now) could let their vehicle “work” in an autonomous taxi service when they are not using it. An idea that would be difficult to convey if the Tesla batteries did not hold enough charge over time …