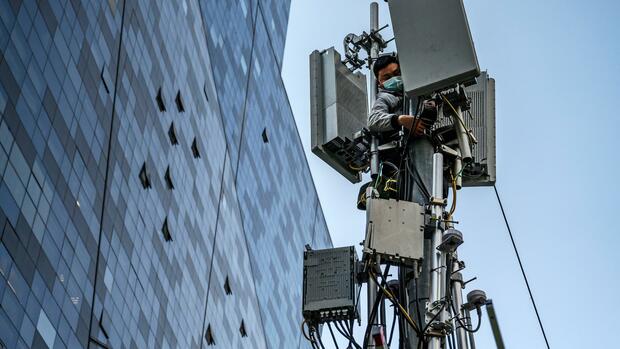 Dusseldorf Hardly any other technology company in the world has been so much in the focus of political debates for years as the Chinese network supplier Huawei. And hardly any company is as controversial. US President Donald Trump overwhelmed Huawei with tough sanctions. His accusation: the network supplier is a threat to the security of the countries and companies that use its technology. Even more: Huawei paves the way for state espionage and sabotage through Beijing.

The company has always sharply rejected this. The group’s top managers repeatedly emphasized the independence of Beijing. Founder Ren Zhengfei told Handelsblatt last year: “I don’t know what the Chinese government is thinking. She doesn’t tell me anything. Huawei is a private company. ”Maximum distance was the guiding principle.

This attitude is now changing, the Handelsblatt learned from several insiders. The group has come to the realization that only with the backing of Chinese authorities can massive consequences for Huawei’s business be averted.

Huawei is a hierarchical company. The top management sets the strategy. The approximately 200,000 employees worldwide can read the orientation of their group from this. There are always key events. One of these events was Chairman Eric Xu’s presentation of the annual figures and the State Department’s response in early April, according to the Handelsblatt. The reorientation has already been clearly shown here.

The spokeswoman for the Chinese foreign ministry announced that Beijing will not stand by as the US puts Huawei under pressure.

A little later, none other than Chinese Foreign Ministry spokeswoman Hua Chunying picked up Xu’s words. She noticed the “strong statements” made by Chairman Xu. With his question he raised an important point. “We will not remain idle,” said Hua.

Huawei does not officially speak of a strategy shift. A spokesman confirmed Chairman Xu’s statements and that they were taken up directly by Beijing. However, he said: “Huawei’s contacts with Chinese authorities are comparable to the contacts we have with authorities in other countries in which we do business.”

The spokesman emphasized that Xu had given no particular importance to the government. “The intention of his remarks was to warn of an escalating trade war,” said the PR man. “There are no fundamental changes here.”

Huawei is also controversial in Germany

Market access for Huawei has become a political issue. In Europe, the company has managed to become one of the most important suppliers for mobile network operators over the past two decades. In Germany, the equipment from China is in all three networks. Both Deutsche Telekom, Vodafone and Telefónica have equipped around half of their networks with components from Huawei.

At the same time, several states, including Germany, are considering restricting or even prohibiting market access for Huawei. The introduction of the next 5G mobile communication standard is intended to significantly expand mobile data transmission worldwide. In Berlin, in particular, the question of whether Huawei can supply components to equip the networks is being debated.

The network operators are already creating facts. The pressure is high to provide Germany with 5G mobile communications as quickly as possible. Deutsche Telekom had held back for a long time and said that it would not conclude new contracts for 5G equipment while the debate in Berlin was still going on.

Last week the Dax group said goodbye to the self-imposed waiting position. Telekom CEO Timotheus Höttges said at the annual general meeting that the company has so far relied on Huawei and Ericsson for its network equipment. “That will also apply to the further development of the 4G and 5G network,” said Höttges. The rivals Vodafone and Telefónica had previously announced that they would also use Huawei equipment when expanding their 5G networks in Germany.

The debate in Berlin is being followed closely from Beijing. At the Handelsblatt Industry Summit in Essen, the Chinese ambassador to Germany, Ken Wu, already said in December: “If Germany would ultimately make a decision that would lead to the expulsion of Huawei from the German market, the consequences must be expected . The Chinese government will not stand idly by. ”

Wu also gave an indication of what a Chinese answer could look like: “Last year, 28 million cars were sold on the Chinese market, including seven million German cars.” Beijing can also say that German cars are not safe. In Berlin, the statements were seen as an open threat.

Chinese diplomats were also noticed in Canada and Denmark with similar threats. The interaction between Huawei and Chinese embassies “crosses the line between diplomacy and aggression,” write the industry analysts from Strand Consult in a study on Huawei’s communication strategy. The use of “threats and reprisals” shows how extraordinarily close Huawei’s relationship with the Chinese government is.

The most prominent case is the response to the arrest of Huawei chief financial officer Meng Wanzhou, the daughter of company founder Ren Zhengei, in Canada. Beijing imposed trade fines and detained two Canadians. Nothing happened for 18 months, charges were brought last week. The accusation: espionage.

Huawei’s new demeanor is in line with the regime’s changed diplomatic line. The slogan of the former party leader Deng Xiaoping “hide your strength” seems to have served as the leitmotif for the design of foreign policy. “Wolf warriors” is the name given to the new guard of diplomats who publicly criticize critics or critical reports, particularly in western host countries.

The name comes from the eponymous series of Chinese action films. In this series, reminiscent of the Rambo film series, the People’s Republic single-handedly fights against foreign powers.

The series is celebrated on social networks in China as the expression of a new self-confidence. One of her stars is the spokesman for the State Department in Beijing, Zhao Lijian, who spread the information on Twitter that the corona virus could have come from the US military.

China is formulating its foreign policy interests more and more clearly under head of state and party leader Xi Jinping. Initially, they focused on multilateral initiatives such as the Asian Infrastructure Investment Bank (AIIB), in which other countries, including Germany, can have a say. This is hardly the case with new initiatives such as the “New Silk Road”.

The UK ambassador, Liu Xiaoming, said: “Some people say that China has many ‘wolf warriors’ today. For me, this has to do with the fact that there are many wolves in the world. “Liu said:” I encourage my diplomats across the board to take the initiative to react to wars with wolves – in order to defend the dignity and interests of the country. “

Huawei apparently feels encouraged. “Over the past year, Huawei’s PR machine has started to mimic China’s’ wolf warrior ‘diplomats’ aggressive tactics by attacking journalists on Twitter and even suing analysts for links between the company and the Chinese government,” said Noah Barkin from the German Marshall Fund in Berlin.

Barkin refers, among other things, to a lawsuit that Huawei has filed against critics in France, including well-known researcher Valerie Niquet from the Foundation for Strategic Research in Paris.

However, Huawei is adopting the methods of the Chinese government not only in attempts to intimidate, but also when it comes to gaining sympathy. When the corona virus spread in Europe and the health system in countries like Italy was overloaded, the People’s Republic presented itself as a rescuer in need.

Chinese transport planes floated in with relief supplies that were unloaded in a manner that made publicity clear. In Serbia, President Aleksandar Vučić kissed the Chinese flag in thanks. Huawei followed the regime and arranged deliveries of masks and protective gloves to Europe.

Huawei – a tech company like everyone else? This self-portrayal, which Huawei has maintained for years, comes under pressure due to its own strategy shift. The closer Huawei gets to the Chinese state, the more it reinforces its critics.

More: How dangerous is Huawei? Insights into the inner life of the controversial tech group.