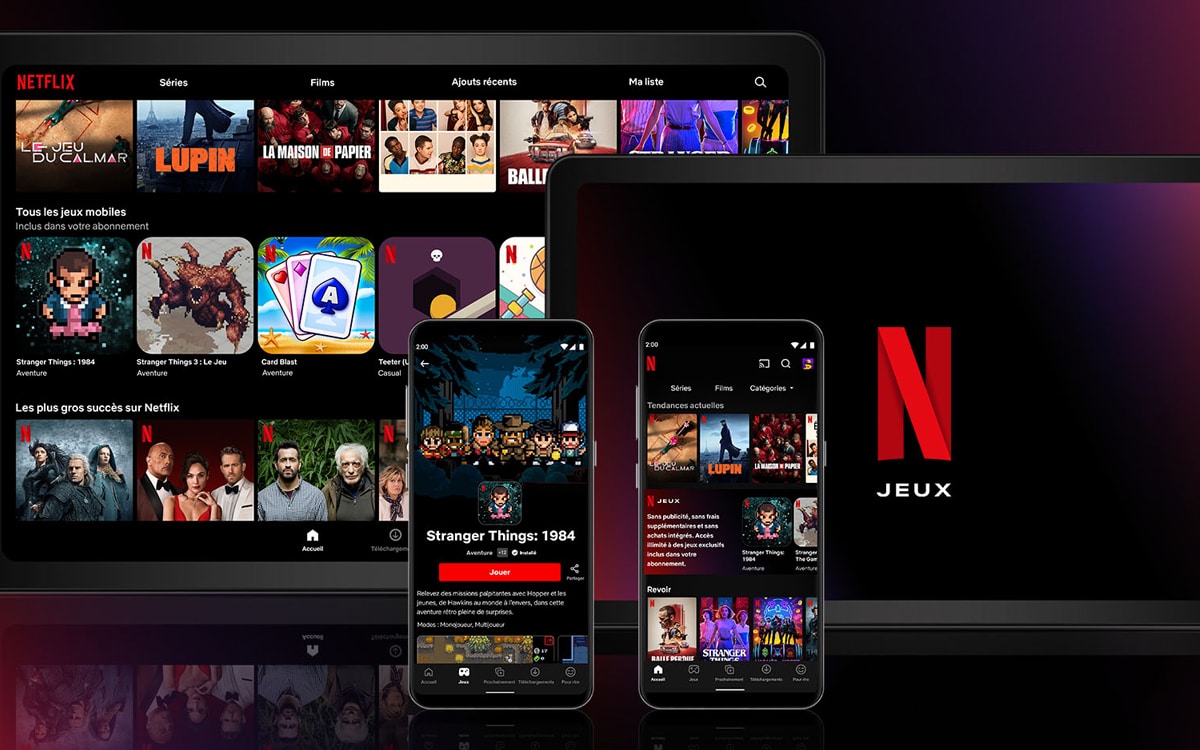 Netflix Gaming is now available in France. All subscribers equipped with an Android smartphone or tablet are invited to play a list of 5 mobile games, including 2 titles inspired by Stranger Things. We explain how to play it.

Netflix has just announced the arrival of its first mobile games in France. After several months of testing and limited availability to a handful of countries, Netflix Gaming is available for all French subscribers from Wednesday 3 November. This new feature is open to all plans, whether you have opted for the standard subscription or the premium subscription with 4K included. “There are no ads, no additional fees, no in-app purchases”, promises the leader in streaming. This is quite rare for 100% free mobile games.

First, Netflix Gaming is limited to Android smartphones and tablets. Subscribers who use an Android smartphone will see a section dedicated to games and a tab dedicated to titles to download. On tablets, this tab is replaced by the Categories drop-down menu, where the available games will appear. If you watch the movies and series from the Netflix catalog on PC or on an iOS device (iPad, iPhone), you will need to be patient.

What are the top 5 games available with Netflix Gaming?

For starters, Netflix provides a total of 5 video games. Unsurprisingly, some of the mobile games are inspired by one of the streaming platform’s hit series, Stranger Things. Here is the list of the 5 games available today in the Android Netflix app:

As the title suggests, the first two games are inspired by Stranger Things. In Stranger Things: 1984, subscribers can play as one of the 12 characters from the cult series and face a horde of monsters from the world upside down. Note that the game has been available since 2019 and that it is not necessary to have a Netflix subscription to pick it up from the Play Store. More cerebral, Stranger Things 1984 will delight lovers of riddles and puzzles.

Netflix also offers three original games, unrelated to a series in its catalog. Shooting Hoops is a fairly basic basketball game that challenges subscribers to tuck balls into a basket with darts. For his part, Card Blast is a game of poker mixed with a puzzle card game. At last, Teeter Up is a simple game where you will have to slide a ball into a hole by moving certain elements.

Obviously, Netflix does not intend to stop there. The streaming giant has pledged to expand the catalog of mobile games available on its platform in the months and years to come. “We want to build a library of games that meets the desires of each and every one of you. This is the start of a great gaming experience for us ”, says Netflix, whose ambitions are not limited to mobile gaming. It is indeed rumored that the number 1 in VOD would seek to launch games on other platforms.

How to test the 5 video games from Netflix Gaming?

To test the 5 mobile games developed by Netflix, bring your Android smartphone or tablet. To gain access to the games section, we invite you to install the latest app update on your terminal. Note that the games have not yet appeared to all users. The deployment of the novelty is however underway in France. We explain how to test the 5 games as soon as the option is available on your device:

The streaming giant specifies that mobile video games are not not offered to Youth accounts intended for children. “If you have set up a PIN code to prevent children from accessing adult profiles, you will need to use it in order to sign in to Netflix and play”, warns the company. Finally, some of the games require an internet connection to function. What do you think of this new foray by Netflix into the world of video games? We await your opinion in the comments.