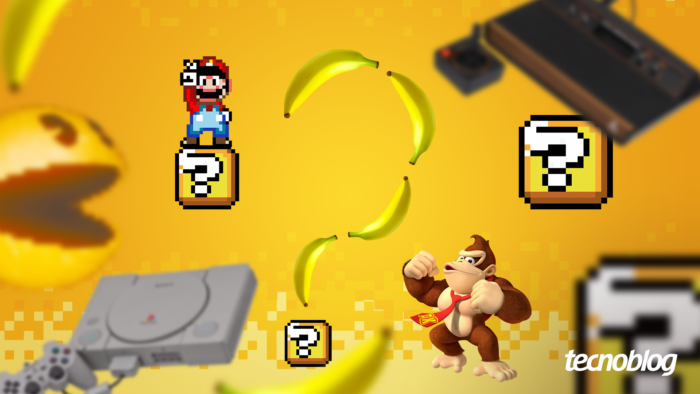 You may have heard someone say that you shouldn’t blow a cartridge or that using the video game on a television can ruin it. These stories related to old games are nothing new, but not all of them should be taken literally. If you want to know more about some myths and truths about the world of retrogaming, come with me and check the following lines.

If you grew up in the 80s and 90s, then you must have heard many of these stories in your childhood and adolescence. Many of them were considered lies that older people told to stop you from spending all day in front of the television. But some are as true as the computer in Mortal Kombat 2 be extremely robbed. Check out:

Video game consoles are electronic, meaning they need electrical energy to function. If you keep systems like the NES or Mega Drive idle for a long time (I mean months and years), it is possible that they will stop operating. The tip here is whenever possible to put them to work for a few minutes, so you guarantee a longer useful life for the device.

2. Do not blow cartridges

Whenever someone tries to make an old video game cartridge like the SNES or the Master System work, the first act is to take it to their mouth and blow it. The intention is to remove any dust, but what can happen is to make the situation worse. That’s because, when blowing, saliva residues can be released to the cartridge chip, creating problems related to the electrical energy of the item.

You can be sure that this is not one of the myths of retrogaming.

3. Emulator is as good as original console

Let’s be clear: I’m not referring to the entire experience itself. There are people who prefer every detail that involves playing on original hardware and that’s okay. My point is the quality of the games themselves. Many emulators offer gameplay as good and even better than the consoles of yesteryear.

This is because of the technological evolution of PCs and other peripherals. If the goal is just to check out retro games, then emulation is an excellent choice.

For those who like to play games using authentic consoles, it is always worth remembering that there are still titles being developed for our heart’s video games. In recent years, the independent scene has released games for the Dreamcast, Mega Drive, Master System, Nintendinho, Super Nintendo, Nintendo 64, among others. Keeping the passion for playing on these systems alive.

5. Is it possible to play old video game consoles on modern TVs

Just because your television only has an HDMI input doesn’t mean you can’t enjoy your Nintendo 64 on it anymore. Therefore, it is true that there are alternatives to using systems considered retro in modern devices.

You have to shell out some money for cables and accessories that allow the image to be scaled, but they are still alternatives that enthusiasts might like. Either way, it’s a much more expensive part of this hobby.

During the golden age of magazines such as Action Games, Super GamePower and Nintendo World, many stories emerged. Of course, there are a multitude of untruths, but I decided to separate five that live in the minds of players to this day.

For people who grew up in the days of tube televisions (also known as CRT), it was normal to hear from their elders (especially their parents) that it was not good to play a lot of video games. The main reason is that it could ruin the family TV. No further argument was offered, just that more than an hour of gaming would end up burning the device. Well, that wasn’t really true.

2. Every old video game is rare

Nowadays, people tend to think that any item from the past can be considered rare and consequently cost a lot of money. Not quite. There are consoles like the PlayStation 1 that were extremely popular, that is, they sold a lot.

Therefore, there are many copies of the system out there, which makes it old, but not rare at all. Examples of these myths in the world of retrogaming abound.

3. Atari’s ET is responsible for the video game crash

It’s not for that. The truth is that the game based on the movie ET The Extraterrestrial it’s just the icing on the cake that sank the games industry in 1983. However, many other factors such as the frequency of releases and the carelessness in the quality of Atari titles were much more relevant to what happened at the time. the game of E.T. it sucks, no doubt, but there are many other worse works of the same generation.

For a long time, players and fans of the Capcom franchise believed that the character Sheng Long (Ryu and Ken’s supposed master) could be unlocked in Street Fighter 2. But the truth is that it was nothing more than an April Fool’s joke by the American magazine EGM, which featured him in its pages claiming that he would be a secret boss of the game.

Interestingly, many years later, Capcom decided to create the character Gouken in Street Fighter IV with many similarities of Sheng Long.

5. The PlayStation 1 and Sega Saturn weren’t the first 32-bit consoles

It is very common to hear enthusiasts claiming that both the Sony and Sega consoles were the first of the so-called 32-bit generation. In fact, they didn’t even come close to such a feat. The FM Towns Marty, released by the Japanese company Fujitsu in 1993, is actually the first 32-bit video game console in history. Only in November and December 1994 would the Saturn and PS1 arrive respectively.

Having fun with old games and consoles brings a whole nostalgia, as well as a very different experience than what we have on modern systems. In Hit Kill 41 we explored the subject a lot, be sure to check it out!

So, did you already know some of these myths and truths about the world of retrogaming? Which one surprised you the most? Don’t forget to join the community technoblog to leave your opinion!

Myths and truths about the world of retrogaming