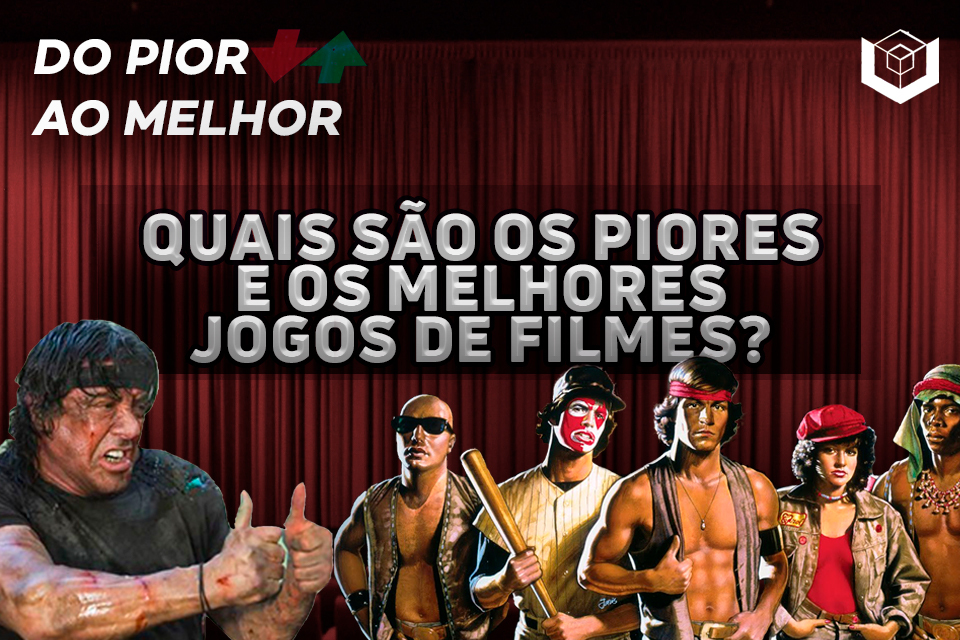 Movie-inspired games are nothing new. Big Hollywood companies wanting to profit even more from their productions sometimes go very well and sometimes they go very wrong.

Undoubtedly, this was one of the most difficult lists on the board in relation to research, but after hours and hours of searching, we got the script that you have been waiting for! You voted and here’s the Worst to Best Special for movie-based games. Here are our criteria, pay close attention:

The game is hack and slash, that is, press all the buttons to make combos and earn points. In much of the game, it is possible to use Aragorn, Gimli or Legolas in several different levels created based on scenes from the two features. The three have different weapons and combos, but the basic fighting style is the same. EA was aiming to launch the first game adapted simultaneously with the release of the Fellowship of the Ring film, but it was not ready for that, so the production was not lost, but adapted and expanded to encompass events in The Two Towers.

The game was highly praised for its graphics, for its great gameplay mechanics, for its sound, combat system, fidelity and places and music of the films. He ended up being criticized for his aiming system, camera, linearity of levels, artificial intelligence of the allies, problems in texture and few details. Even so, he was very successful and scored 81.

Like its predecessor, the style of the game is hack and slash and features Gandalf, Aragorn, Legolas, Gimli, Frodo and Sam as playable characters, as well as Faramir, Pippin and Merry as unlockables. Each of them has a set of combos and unique attributes that will generate experience points that can be used to make upgrades. In this game, the environments are much more interactive, with players being able to operate machinery or use ambient weapons. According to producer Glen Schofield, the most difficult part of the development was bringing the same exciting and breathtaking moments that the films presented to the title, so that the product would be authentic to what it was based on.

In the end, it worked! The title was praised for how faithful it is to the films, the graphics, the audio, animations, sets, character models, cutscenes, music, acting and combat. The game received criticism related to the camera, frame rate, non-skippable cutscenes, short duration and unclear objectives. His grade is 82.75.

The Warriors, released in 2005, was inspired by the movie of the same name released in the late 1970s. Developed by Rockstar Toronto, the game tells the story of a New York gang that is accused of killing the leader of another gang and now she must return to Coney Island while being chased by the police and rivals.

The gameplay of the game is in the beat ’em up 3D style, in which the player must defeat all the enemies that appear in the frantic crap using one of the 9 characters available, which have different gameplay styles. In addition to widespread fights, there are objectives that must be fulfilled, such as stealing a specific number of items and some more different stages, such as one of chase.

The soundtrack featured several songs from the film, but some were removed from the PS3 and PS4 versions in 2016 due to copyright. In the voice work, several actors returned to their roles, such as Michael Beck, James Remar and Dorsey Wright.

Analysts really liked the deep combat, the controls, its style, history and soundtrack, and the game managed to take all the essence of the film and bring it to a different media in a masterful way. The criticisms became more boring, the graphics unattractive and for some frustrating parts. Your grade is 84.5.

Calm down, you didn’t get it wrong: Ratchet & Clank, released in 2016, is based on a movie. The game, which also serves as a series reboot, was developed simultaneously with the production of the movie Ratchet & Clank, released in the same year. Both projects share the same character models, environments, animations, color correction tools and part of the story. The feature ended up being released a week after the game, but that doesn’t change our criteria.

Now, talking about the game: we accompany the young mechanic Ratchet, who dreams of joining the group of heroes Galactic Rangers, and his little friend Clank, a defective war robot, whose task is to inform the good guys of the evil plan of Alonzo Drek , who plans to kill them all with an army of robots.

The gameplay is very similar to other games in the franchise, with the player controlling the two characters, going through several different stages and with the possibility of using weapons and special equipment to defeat enemies, overcome obstacles and solve puzzles.

For the critics, he uses humor very well, it has many variations in gameplay, the controls are great, the variety of weapons and gadgets is quite large and the visuals are incredible, but the story is not that well developed. Your grade is 85.

It was no doubt that this classic would be here. GoldenEye 007, released in 1997, is based on the James Bond film “007 against GoldenEye”, which hit theaters two years earlier. In the story, the British secret agent must end up preventing a group of criminals from using a satellite weapon against London, which would cause a meltdown in the global economy.

The player must pass through several levels and fulfill objectives, whether it is destroying items, finding NPCs or rescuing hostages. There is a very wide variety of weapons for the player to battle against enemies in the 20 available missions, which can be replayed when finished to unlock cheating options depending on some specific factors of the stage.

One of the great golds of the title is multiplayer, which allows up to four players to face each other in game modes such as You Only Live Twice, The Man With the Golden Gun and License to Kill, which have caused thousands of players to spend hours and hours battling against each other.

The game was a public and critical success, selling approximately 2.1 million copies and receiving extremely high marks. The compliments were for the variety of environments, the amount of details in them, the realistic animations, the special effects, the stable frame rate in multiplayer, the songs, the gameplay that requires more strategy and contains several moments of stealth and multiplayer modes. He received several game awards of the year and influenced many games that came after him. Your grade is 96.

Now for the worst, get ready because the business will get ugly.

Remember that R.I.P.D. – Agentes do Além, launched in 2013? A lot of people will say no, but I knew he had a game called R.I.P.D. The game, which arrived in the same year? Yeah, neither do I, but this game brings a generic gameplay of fighting games that can be in one or two players who must end the renegade ghosts in a horde scheme.

Among the horrors of the game we have the Artificial Stupidity of the enemies, the bad aiming mechanics, there is no leveling scheme or even a story, which makes the game not have much objective and, in the end, the gameplay is the same thing all the time, making the experience tedious. Your grade is 32.5.

And not even the police robo went blank here. Robocop, released in 2003, is based on the character’s first films and ended up being a total and complete disaster.

The game has 9 different stages in which the protagonist can use different weapons to finish off opponents, a pity that the experience is frustrating due to the sound, graphics, the difficulty, the slow movement, the bad aiming system, the controls, the giant amount of enemies and the giant amount of bullets needed to kill them.

For some critics, this is the worst game since Superman 64, which just didn’t make the list because it was an adaptation of an animation and not a movie. Your grade is 30.

A game that nobody knows from a movie that nobody knows? This is Jumper: Griffin’s Story, released in 2008, based on the movie Jumper, which hit theaters the same year. The game accompanies the protagonist Griffin in his adventure that has no salt, pepper and no other seasoning. And this is far from the worst of the problems.

The gameplay is totally punching buttons in a crazy way, the gameplay mechanics are poorly done, the animations of the characters are very poorly done, the camera has many problems that make the game frustrating and the menus are extremely confusing. I apologize to everyone who had a happier life for not knowing the game and the movie and now they will not be able to erase these images from their heads. Your grade is 30.

And here we have the biggest modern disgrace of video games. Rambo: The Video Game, released in 2014, is based on the first three films of the character played by Sylvester Stallone.

Okay, come on, where do I start? Well, it is a rail shooter-style shooter, in which the player does not move freely, but is stuck on rails. The objective is to defeat enemies on the way, with some parts of stealth and some of demolition.

Now for the fry. Its graphics are extremely dated and out of season, its gameplay is extremely generic, there are several moments of unsightly quick-time events, artificial intelligence is tenebrous, the duration is short and it has constant crashes and crashes. This game terror got 28.3 of note.

When you thought you had seen it all, here is Charlie’s Angels, released in 2003, inspired by the action films As Panteras, 2000, and As Panteras Detonando, 2003. The story follows the three main characters aim to solve a series of mysteries involving missing national monuments.

The gameplay is pure crap that can be in hand or with weapons, but done absolutely anyway. The controls are dated, there are several invisible walls, the camera is dark, the gameplay mechanics are terrible, the graphics are horrible and I could go on for a long time, but you don’t deserve it. It is not only one of the worst adaptations of cinema for games but it is one of the worst games ever made. The score for this thing is 23.

And unlike other episodes on our board, we would like to set aside a quick moment for two dishonorable mentions of games that could make this list among the worst, but that didn’t make it because they didn’t have grades. They are:

Remember, these notes are not ours, but the Metacritic note aggregator. This was the Worst of the Best Games based on films, which was chosen by you during this last week.

Are you ready for next week’s candidates? So, subscribe to the Voxel channel, enter the community tab and vote which of these four franchises you want to see next, from the worst to the best: Fable, Doom, Deus Ex or Metroid.