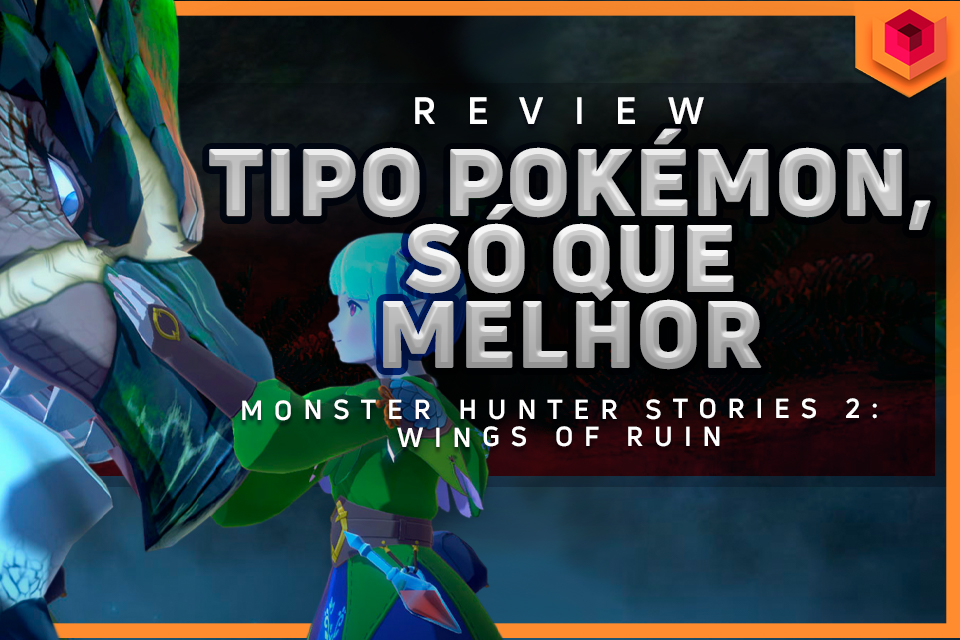 Monster Hunter is a franchise that has come a long way. The Japanese monster series started in 2004, and back in the land of the rising sun it has been a huge success since its release. On the western side of the Earth, the franchise took a little longer to reach popularity. Currently, we can say that few people who enjoy games have never heard of Monster Hunter.

In 2016, the franchise thought about daring, leaving the comfort zone and launched a spin-off for the series, a title totally different from what the guys were used to. Instead of beating down monsters and ripping out their parts to make weapons and armor, the focus was on creating a bond between monsters and hunters – here called assemblers (yeah really, it looks a lot less aggressive).

thus was born Monster Hunter Stories, which would become something much closer to that other Japanese little monster game (you know which one I’m talking about, right?) But we’re here to talk about Monster Hunter Stories 2: Wings of Ruin which arrives for the Nintendo Switch and PC on July 9th.

Also check out our video review:

We received the game a short time ago, so there hasn’t been a lot of time to explore the endgame yet so this analysis will be done in a different way: I’ll give a grade for what I’ve played so far and until after the release I’ll come back here with even more content and update the text. So, without further ado, let’s go to the analysis of Monster Hunter Stories 2: Wings of Ruins.

A new world of adventures

Especially at the time of battles, which are totally different from the games in the original franchise. while in world or Rise use the third-person action RPG system, Stories uses the system of turns at the time of the brawl. That alone would be a big change, but there are many other things that make it Stories 2 an experience almost completely different from the games in the main franchise.

We have to catch… I mean… fight

Since I mentioned battles as the main point of differentiation of Monster Hunter Stories 2, let’s start talking about them. Clashes follow a turn-based system, with the fastest attacking first, nothing we haven’t seen in dozens of JRPGs out there, however, following the legacy left by the first game, Wings of Ruin maintains the jo-ken-po system. 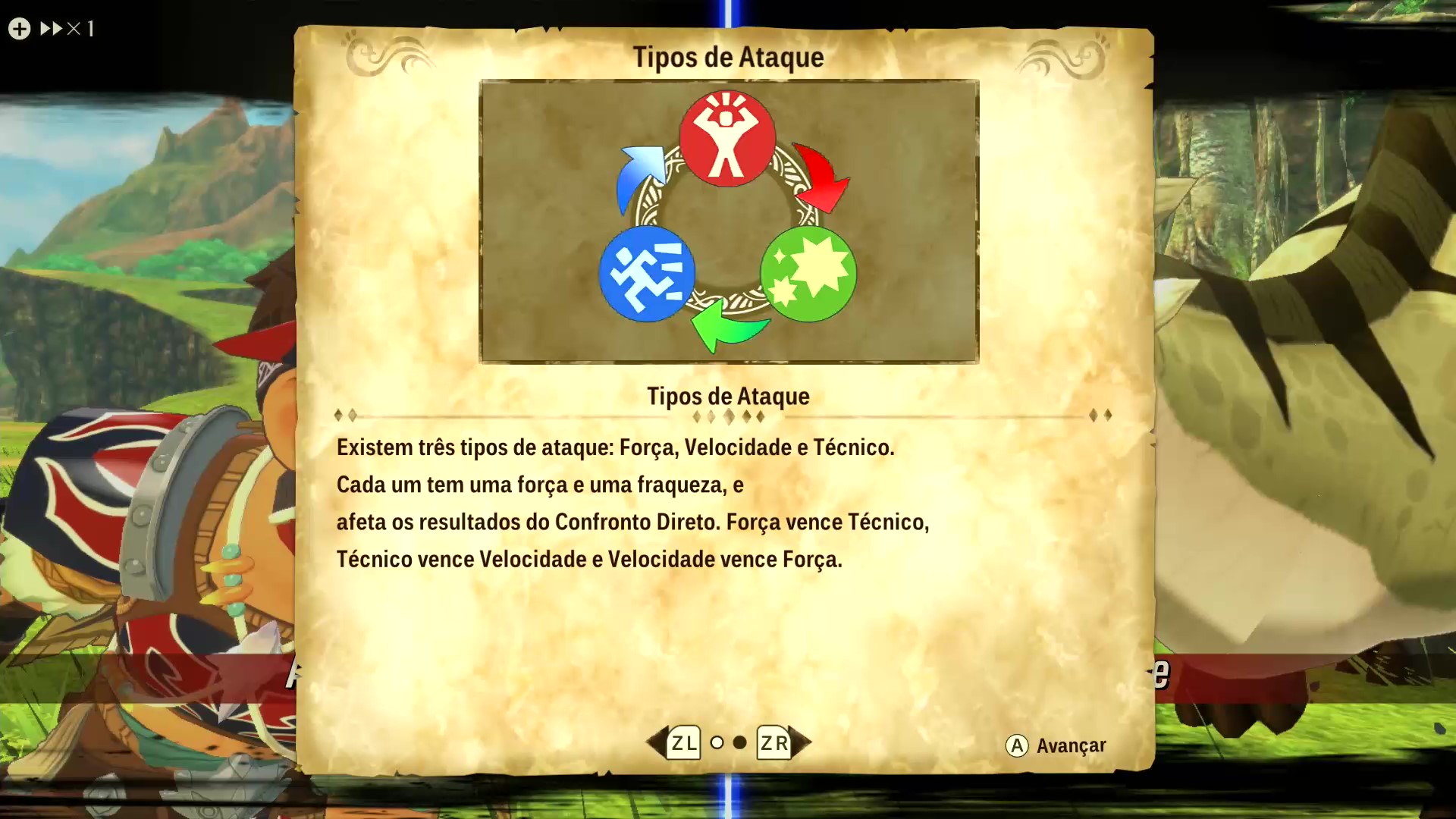 I’ll try to explain this simply: when you and your target are aiming at each other directly, we get into something called direct confrontation. In this direct confrontation there are three types of attack: Strength, Speed ​​and Technical, each of these types has an advantage and a weakness in relation to the other. Strength wins technique that wins speed, which in turn wins strength, thus forming a cycle, as if it were a game of “Rock, Paper and Scissors”

During battles, you will always be accompanied by your monstie and a fellow battler who will also have a companion animal – just to be clear, “monstie” is the name they give to monsters tamed by an assembler.

A line on the ground shows who each opponent is aiming for, so just winning a head-to-head will give you a damage bonus to the opponent, but if you lose, you’re the one who will take the extra damage.

In addition, when you win the confrontation you also carry a meter, which allows you to use abilities, both of the main character and the monsties. This meter works more or less like a mana bar, each skill, either your character or the monstie has a cost. 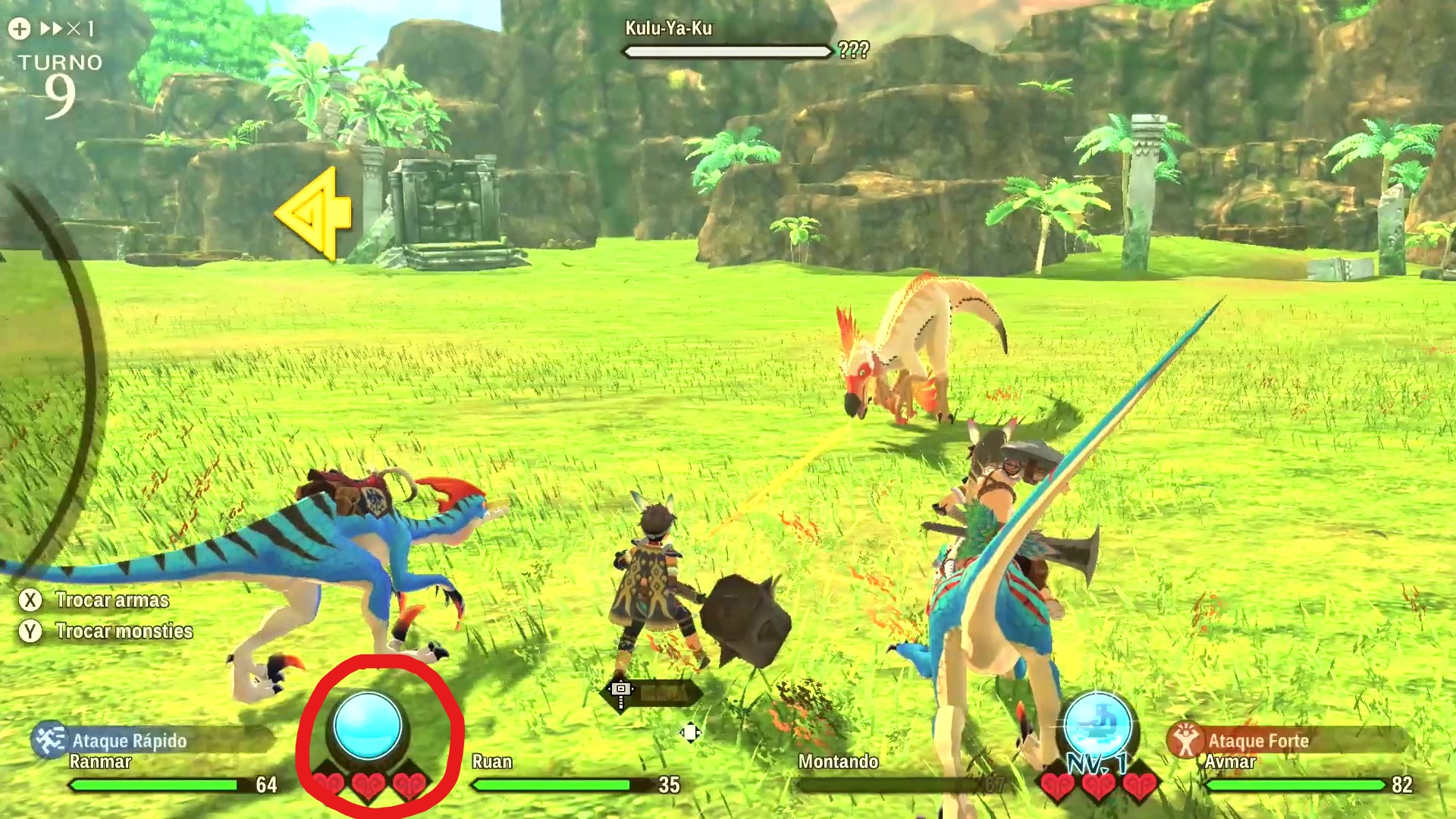 There circled in red is the skill meter.

If you can fully fill your affinity meter, you can mount your monstie and use powerful moves as if they were a special. The coolest thing is that each monster has its signature attack, totally different from each other, so it makes you want to use them all to see the animations. If your battle companion is also mounted on his monstie, it is possible to use a combined special move.

Don’t think that this only sums up the game’s battle system, there are several complexities when it comes to hitting straight with enemies, such as the double attack, which consists of a powerful combined attack between you and one of the monstis (which could be yours or your partner’s) or the type of weapon you use to attack some specific part of the monster, or Duels, which are nothing more than Quick Time Events in the middle of battles to give extra dynamism. 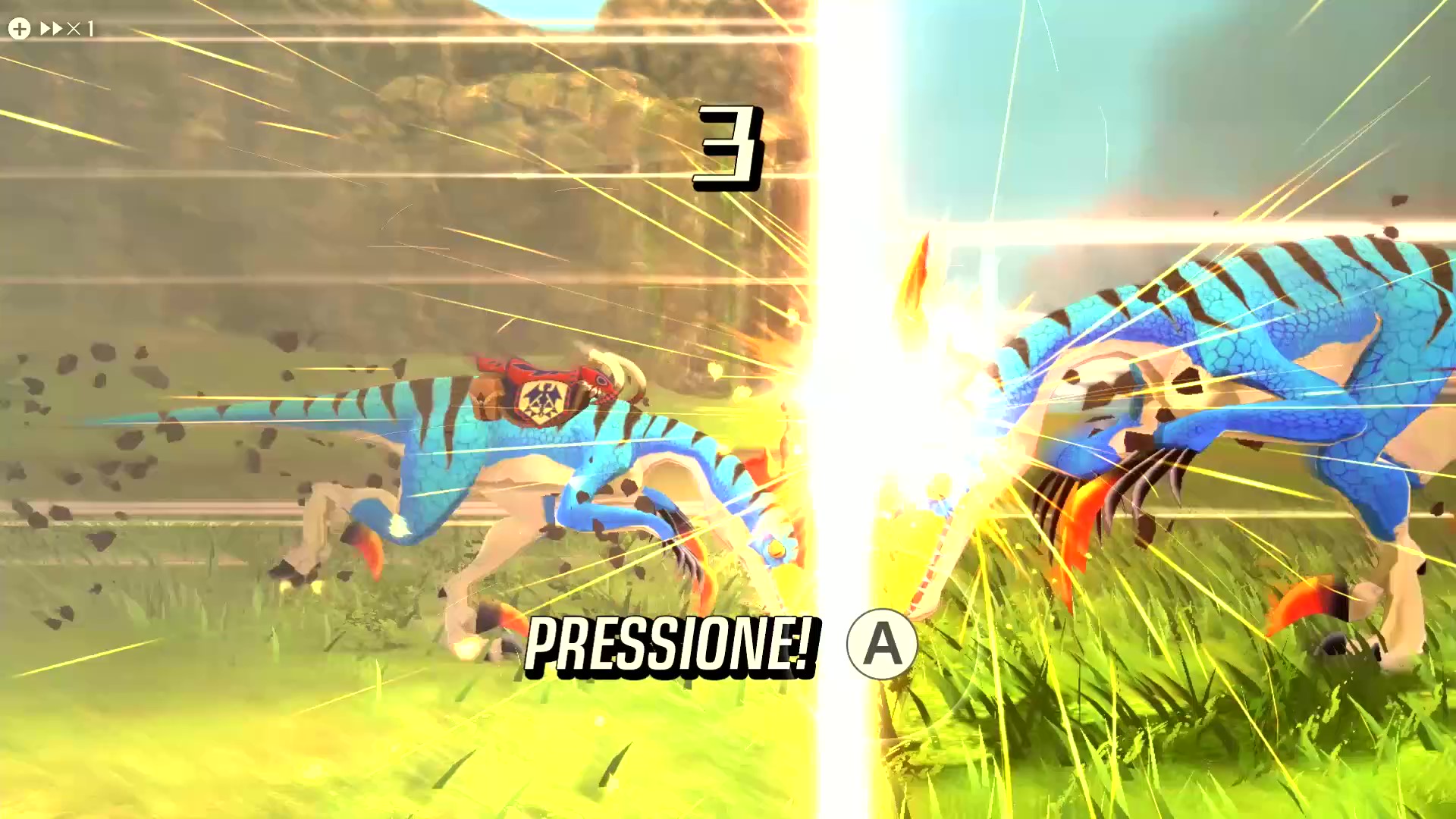 There are dozens of nuances in Wings of Ruin that make each battle completely different from the previous one, eliminating that annoying repetition factor that these RPGs can bring. Even so, when we are very advanced in the game we don’t want to waste time with less important battles, thinking about it the game has an acceleration system that makes the battle up to 3x faster.

If you are already too strong for the bugs in any area, the game will give you an even better teaspoon, the “quick finish” option will appear on the screen and just press the indicated buttons (on the Switch are the triggers) to end the fight instantly and receive all the loot. 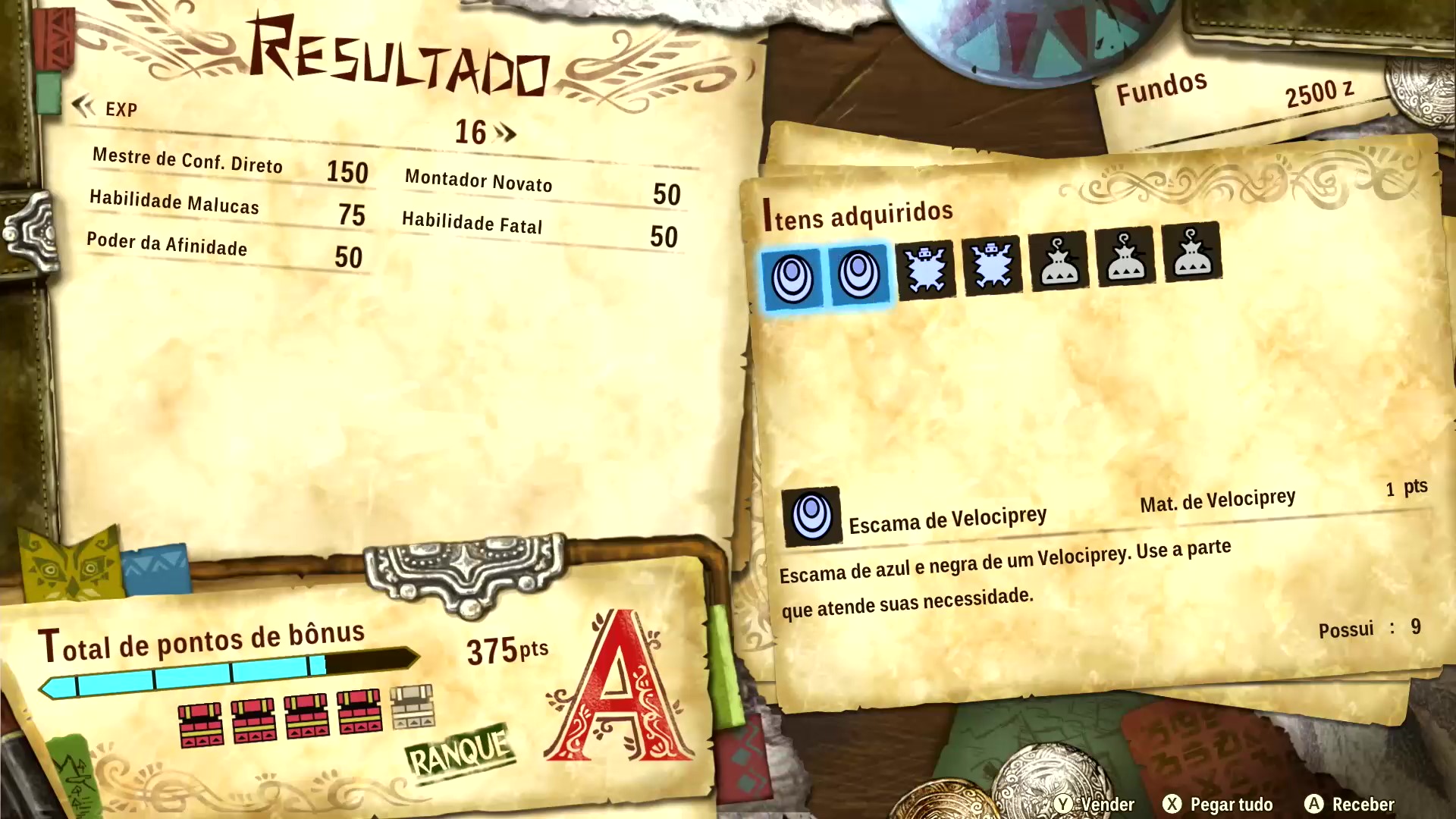 So far, for the most part, I haven’t had any problems with the game’s difficulty. It’s not that punishing, if all your HP or your monstie’s HP runs out, you lose one heart out of three, you only really get defeated if you lose them all. This has only happened to me once so far when I was getting funny with a type of monster known as “real” who are very powerful creatures – in this case I ended up bumping into a Monoblos, a one-horn version of Diablos that ended me quickly.

After this trauma, I learned my lesson and later I found a Royal Tigrex and managed to not bother the animal.

Monster Hunter Stories 2, as the name says, has a story. We can say with certainty that it focuses much more on the narrative than the games in the main series. I’m over 24 hours of gameplay and I’m not done yet, but what I’ve followed so far is far more immersive than anything the franchise has brought before.

The characters have a greater prominence, especially when we talk about Navirou, the cat with the cookie face that walks behind you all the time. He’s a character who was part of the first Stories and is returning here. But, there’s a catch here that bothers me a bit and it’s something games with a narrative focus shouldn’t do, in my humble opinion: Your character is mute, he just nods and either agrees or disagrees with what’s being said by leaving all part of the interaction for the talking cat. 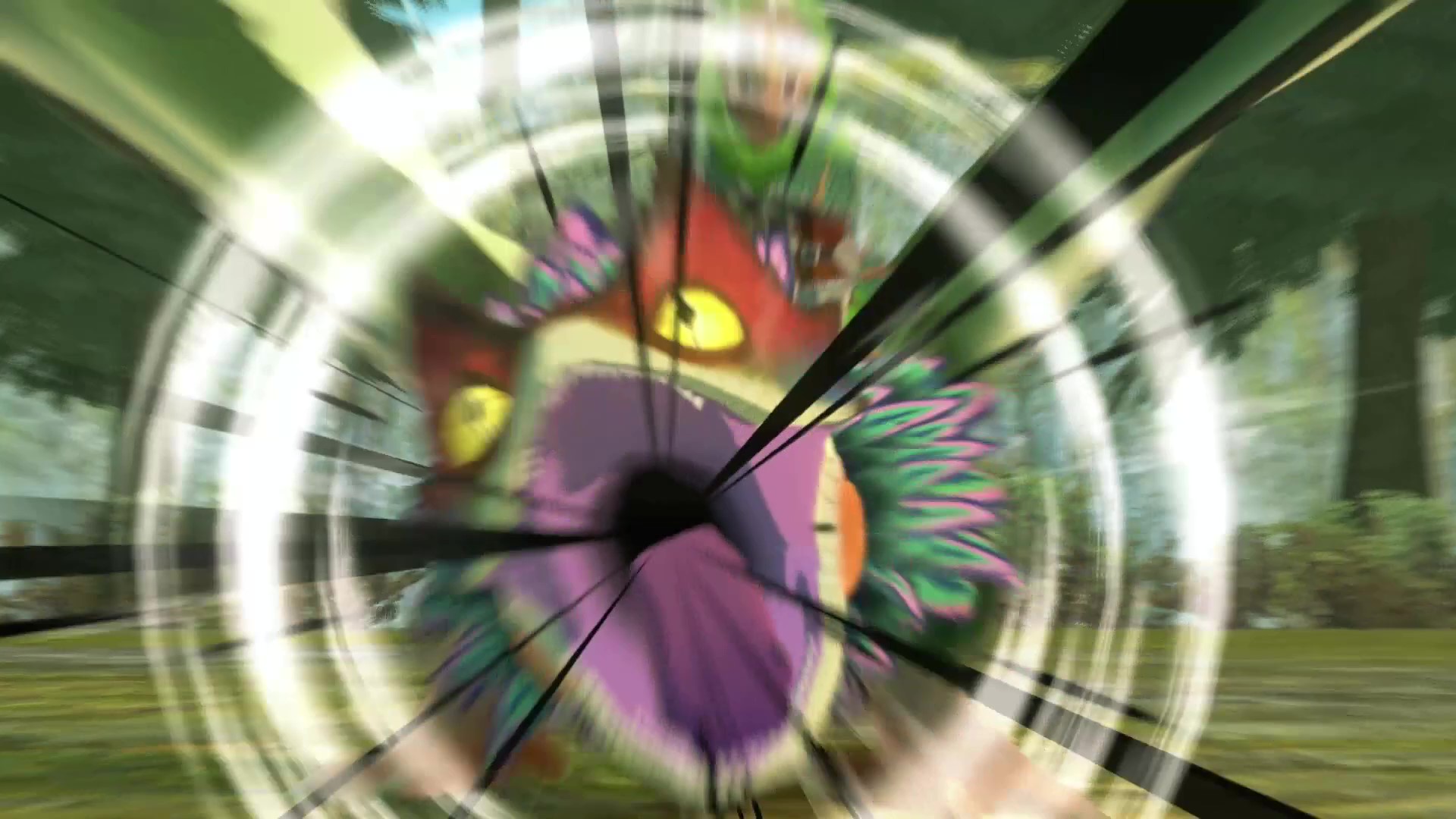 There is a point where the main franchise of Monster Hunter and Stories they talk, at the time of the forge. Just like in previous games of MH, in Wings of Ruin you need loot to make the best weapons and armor.

Here things are simpler, instead of needing specific parts of a monster to make an equipment, each piece you take from it is worth a score, to make an item you need to reach a certain score, reaching this requirement you will be ready to be the master of the forge. This system is much friendlier and at least as far as I am I haven’t been frustrated by not getting a damn snake gem (who plays world or Rise will understand my drama)

In addition to needing to “loot”, you will also need a good team to face the dangers of the world. There are several monster nests scattered around and these nests have eggs. We can sneak in, steal one and run away, then just go to the stable to hatch your egg and say hello to your new mate.

Each egg color represents a monster, so after a while you’ll end up decorating which critter each egg is. There is also a rare egg mechanic, Navirou has a powerful sense of smell and can distinguish which egg is better than the other just by the smell, when he detects an egg with potential, the object will glow and it means it’s time to run away from it. nest before mommy monster arrives. 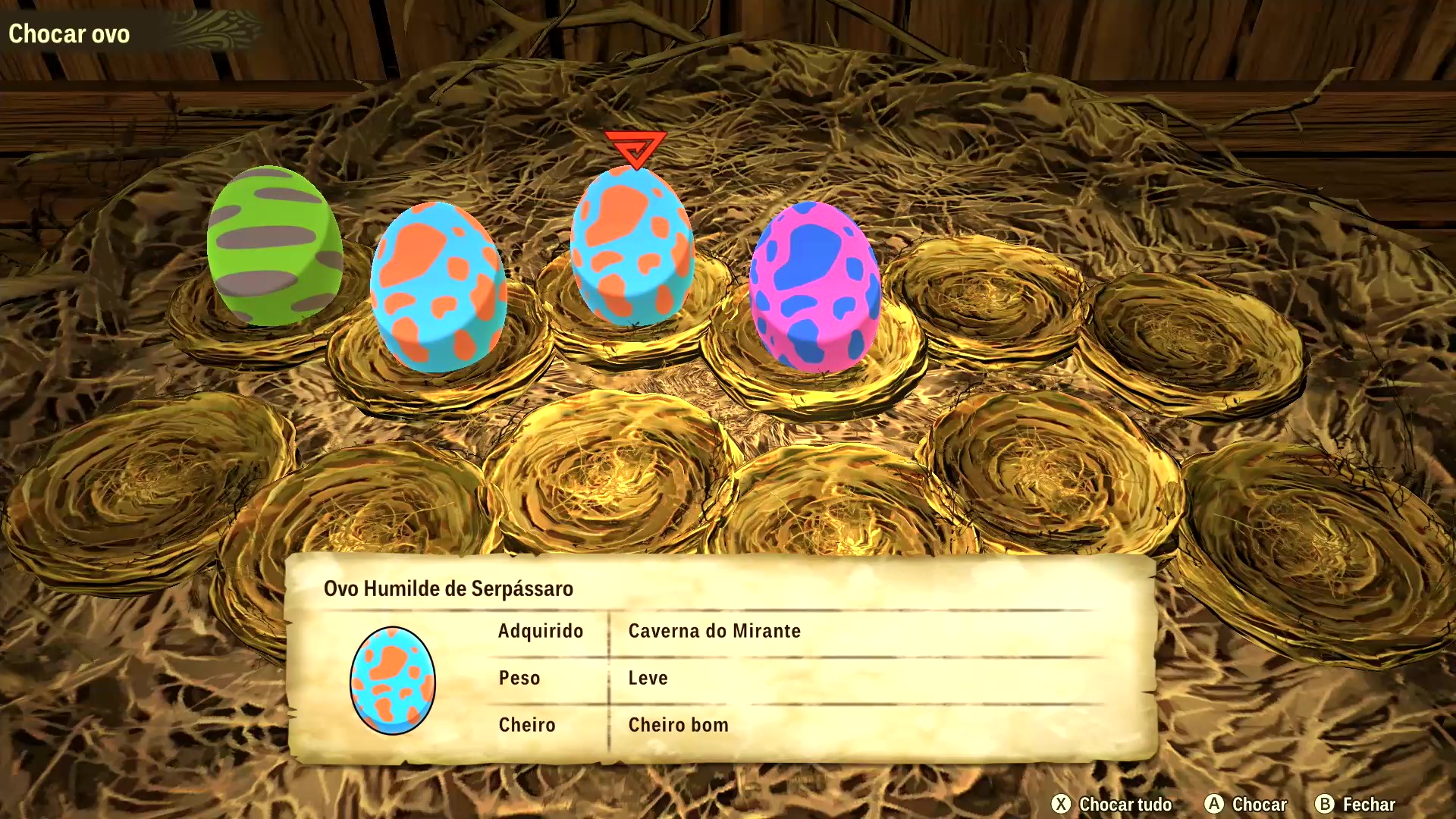 It’s always nice to keep a very diverse team of monsters with you and not just for the sake of battles. Each monster race has special abilities that can help a lot when exploring the environments, for example, the Royal Ludroth can swim, the Kulu-Yaku can detect burrows and nests, the Velocydrome can jump anyway, assemble your team according to what you need for each exploration.

This part of exploring is even freer than in the games in the main franchise. Here, you don’t decide on a map and stay on it for a time determined by a mission. Monster Hunter Stories 2 it has several open and free areas that you can visit whenever you want using the quick trip, or rather, GATOVAN – I loved that name – just open the map and select the Gatovan points you’ve already released and that’s it, simple and effective, but not as fast as the loads are a little time-consuming.

After a while, you will also acquire the “Legacy Ritual”, which just like the first Monster Hunter Stories, allows you to take the abilities of one monster and pass it on to another as if you merged them is a system that will allow you to strengthen your monsters in the way you see fit giving a cool customization touch to your team.

Monster Hunter Stories 2 has positively surprised me, it is quite different from the main franchise, but in its own way, it is captivating me a lot. Quite frankly, I didn’t think I would have so much fun doing this review, so much so that I wouldn’t post until well after the embargo, as I haven’t had enough time yet to really finish the game and enjoy the endgame, but I really got carried away with the adventure.

Of course it’s still not free of problems like bugs: there was one that made me cross the floor (classic that one, isn’t it?) and forced me to restart the game, but it was the only one I really experienced. 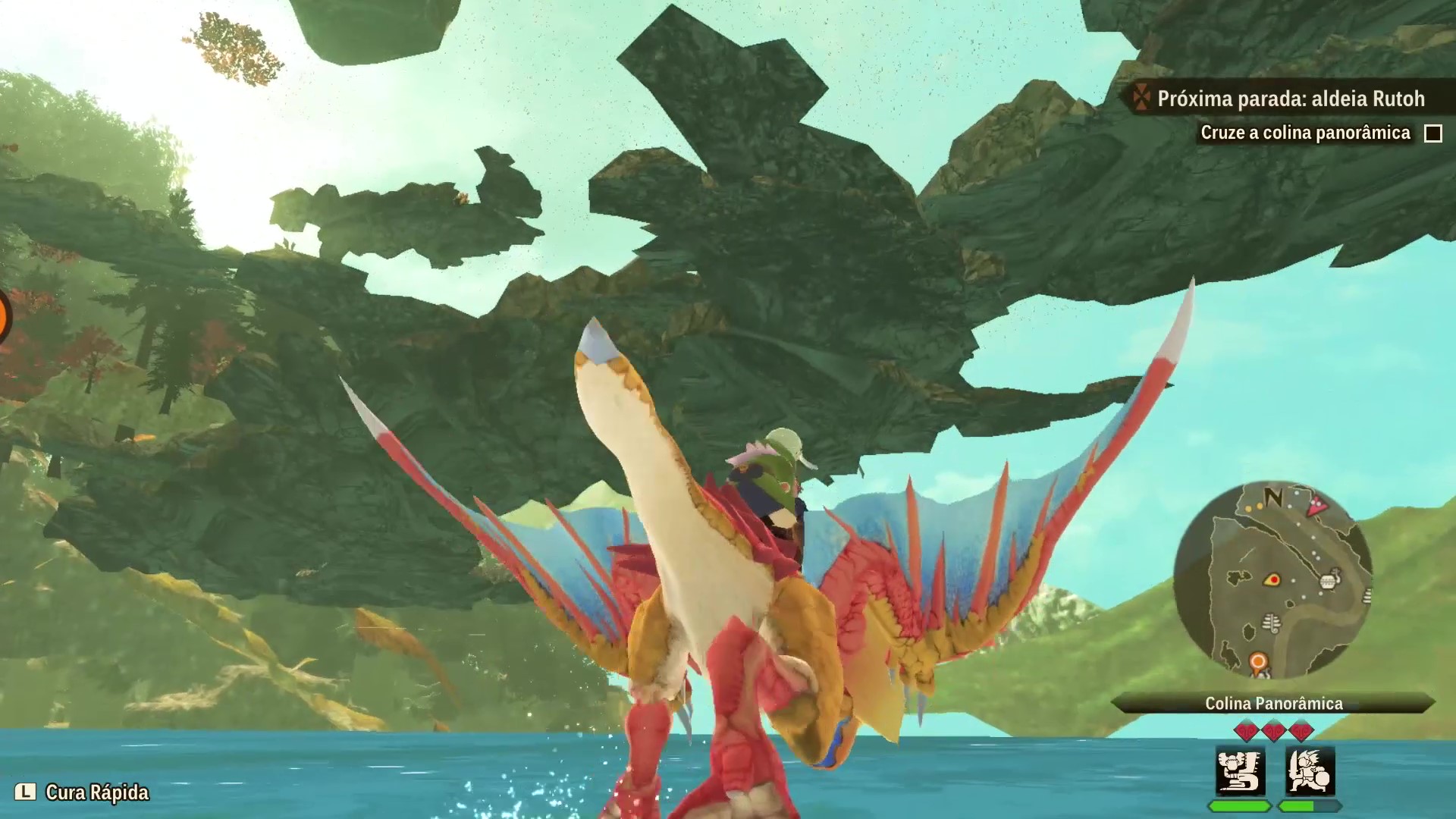 Beauty is in the eye of the beholder… but…

Speaking of graphics, Wings of Ruin it has this much more cartoonish footprint and it doesn’t even come close to Monster Hunter Rise – which I really think is witchcraft, because that’s a beautiful game, even on a less powerful console like Switch. Unfortunately, this is not the strong point of Stories 2, the monster models are pretty ugly. It’s obviously an evolution when compared to the first Stories, but I still can’t say it’s very beautiful. The characters and weapons are even better designed with nicer models, but the scenarios and textures leave a little to be desired

However, if you consider how much fun I’m having with the game, I don’t really care about the graphics that much, as long as I don’t find other bugs like that again.

There are still some elements to explore better in Stories 2, like online coop and endgame, at the moment, the game is a solid 97, with a slight loss of note just because of the graphics and the draw distance, which despite being much better than in Pokémon Sword and Shield for example, it’s still kind of bad.

That was our analysis of Monster Hunter Stories 2: Wings of Ruin, I hope you enjoyed it and comment there if you have any questions regarding the game, add me also on social networks @ruansegretti on insta and @segrettiruan on Twitter.