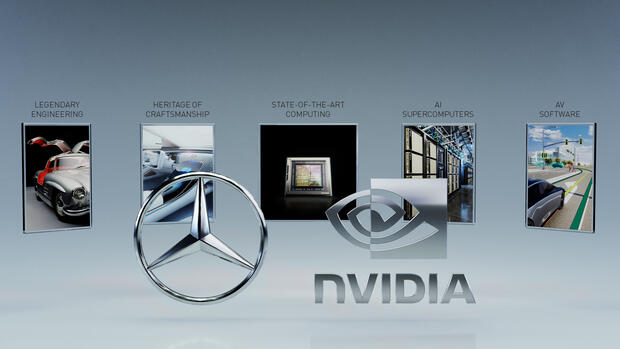 Stuttgart / Santa Clara / San Francisco The engine as the heart of the car has had its day: the car of the future, whether powered by electricity or fossil fuel, is defined by its software and thus by artificial intelligence. This change will happen faster than many expect. At least that’s the message that Mercedes sends this Tuesday when it announced the cooperation with the US company Nvidia via video conference.

So Daimler is getting support from Silicon Valley to work on future car generations. From 2024, computers from the US company are to be installed in all new Mercedes cars. Daimler and the US company promise more durable cars thanks to software updates. From the day of its delivery to the scrap press, the largely autonomous car will be continuously improved with mobile software – this is the plan of the two new partners.

Nvidia founder Jensen Huang and Mercedes boss Ola Källenius presented the cooperation via video conference from Stuttgart and California, San Jose. For the Silicon Valley Group, it was “the chance of a life,” said Huang. Mercedes driver Källenius considers it a “very important strategic partnership”. Mercedes simply wanted to work “with the best”.

For decades, Nvidia has developed from a manufacturer of gaming graphics cards for PCs to a heavyweight in the areas of artificial intelligence, machine learning and supercomputing. The new partnership is intended to help Källenius, who has just taken over the leadership at Mercedes, to lead the company into the digital future.

The promise is that the entire Mercedes fleet will be gradually converted to a software platform based on Nvidia’s hardware and software (“Nvidia Drive”) by the end of 2024. Thousands of engineers worked on both sides of the Atlantic to implement the project, the corporations say.

Deal does not promise exclusivity

Mercedes will license Nvidia’s technology, a joint venture is not planned, and there is no exclusivity in use with this deal. Nevertheless, the cooperation between the two companies is profound, said Mercedes manager Bernhard Wardin. Mercedes could become the first mass car manufacturer to have a fleet entirely based on renewable software.

The previous partnership with BMW has apparently been sacrificed for this ambitious timetable, which should develop a common German answer to Tesla’s challenge in self-driving cars. Now it is clear: The German companies did not find an agreement on the future platform. The crucial point was obviously the speed of the changeover: “It was a question of timing,” said Källenius cautiously.

The Nvidia architecture is not compatible with the Intel technology that BMW works with. The development is now officially “at a standstill”, was announced last Friday.

It is unclear how exactly future technology will be monetized. Once again, a look at the challenger Tesla could help: In some cases, the car software could be ordered by the buyer by subscription or for a one-time fee. It is then delivered via the mobile network.

The development and sale of software, services and apps for an entire vehicle fleet is a “completely new business model for both companies,” said Nvidia founder Huang. The way how to “build and sell cars” will change fundamentally.

The previously close connection between the California car maker Tesla, who is the first to update its vehicles largely online, and its long-term partner Nvidia has cooled noticeably. In mid-2018, Tesla boss Elon Musk announced the development of its own chips for autonomous driving and put Nvidia on the siding.

The companies reached their lowest point in relation to each other when Musk praised the outstanding performance of the company’s own computer chips at an investor day in April 2019. Nvidia then felt compelled to explain in detail why Musk’s statements were incorrect and that he sometimes compared “apples with pears” to make Tesla’s new developments look better – an unusual step.

It is still unclear how the new strategy will affect the auto industry and customers, for example whether the car buyer will have to pay extra for every little update in the future. Another open question is: What happens when a car is sold, i.e. what does the new buyer actually get for his money? Will cars, like smartphones, for example, reach an “end of life” and will not be upgradeable as promised after a few years? Will buyers even want to buy new cars if their vehicles are always up to date in terms of technology?

At least the Nvidia boss could easily imagine rolling through California in a 20-year-old Mercedes with the latest software. Mercedes is “known for timeless classic design,” he says.

Källenius could also get used to the idea: If a 20 year old car can still be sold at the best conditions, a new age may be ordered more often. Otherwise, he could also take the path that Apple is currently demonstrating: until recently, the pure sale of new hardware business model was number one, the focus is now on services and services such as apps, films, music, software or TV productions. That could also be a conceivable model for Mercedes: Selling a car once and earning it through sales through to the end.