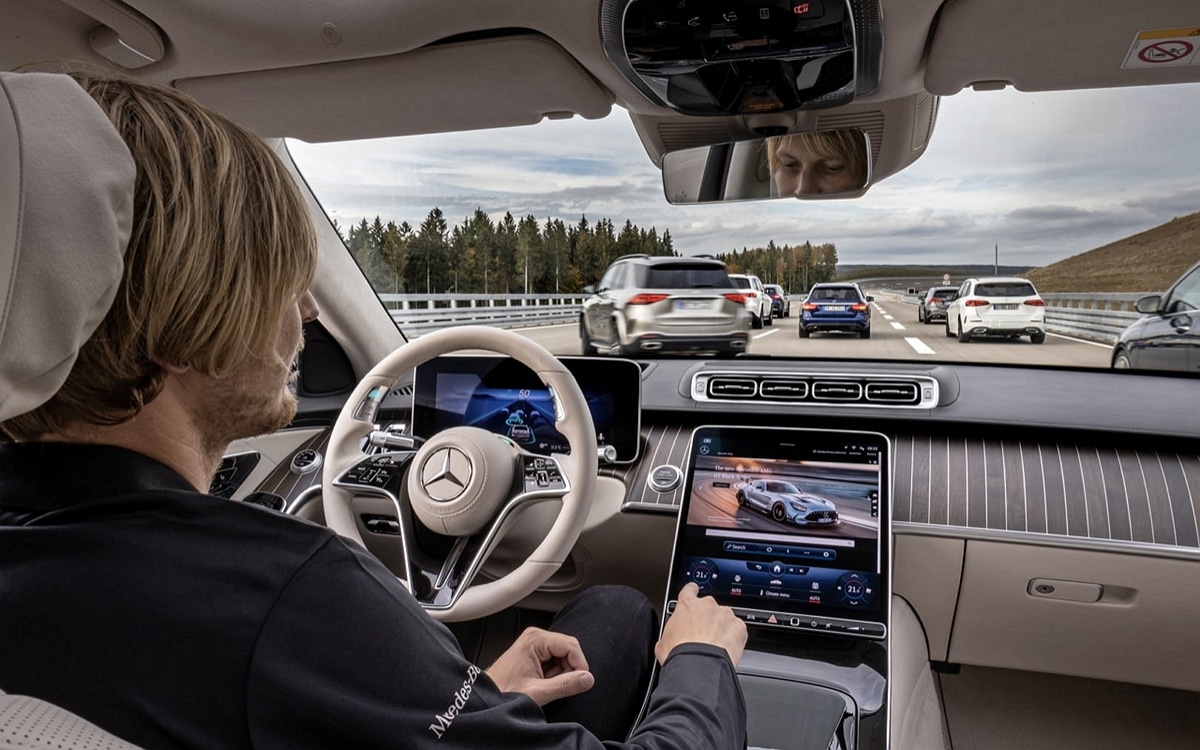 Mercedes-Benz, a subsidiary of Daimler, obtained approval to deploy a hands-free driving system in Germany ahead of Tesla, giving it an edge in the automation race in one of the world’s most competitive automotive markets. world.

The German Federal Motor Transport Authority (KBA) has just approved the semi-autonomous driving system from Mercedes-Benz, paving the way for the subsidiary of Daimler AG to start offer near-autonomous cars internationally. According to a recent press release, Mercedes-Benz’s new Level 3 autonomous driving system is called DRIVE PILOT and will arrive on the S-Class during the first half of 2022. It is also present on the Mercedes EQS that we had been able to test, but was disabled on our roads.

It would also be the very first system to meet stringent global UN-R157 legal requirements for Level 3 systems. As a reminder, this level allows temporary automated driving, only available in certain situations. Level 4 allows for fully autonomous driving on some routes, while level 5 is fully autonomous driving that does not even require occupants.

To read also : Mercedes and Nvidia team up to create the self-driving cars of the future

Mercedes offers autonomous driving to a higher level than Tesla

While Mercedes now offers level 3 autonomous driving, Tesla is still stuck at level 2 with his Autopilot. The latter is ultimately only a driving assistant, since it does not yet allow, according to the authorities, to let the car drive by itself. Earlier this year, Tesla himself admitted that Elon Musk had exaggerated the real capabilities of the Autopilot.

The opening of the road traffic law in Germany for level 3 systems in 2017 enabled the country to create a legal basis for the intended use of these autonomous driving systems. Today, Drive Pilot can thus be used on 13,115 km of motorways in Germany. This means that on authorized sections of the motorway, when the traffic density is high, the driver can choose to let the Drive Pilot take control of the driving.

However, do not expect to complete your journey using the autonomous driving system.. For the moment, the maximum speed authorized by law is 60 km / h, it can only be activated in the event of heavy traffic or congestion. ” Drive Pilot allows the driver to turn away from traffic and concentrate on certain secondary activities Mercedes said in a statement. ” For example, to communicate with colleagues via the on-board office, to write e-mails, to surf the Internet or to relax and watch a movie ». All of these things are impossible in a Tesla, since drivers need to keep their hands on the wheel and be ready to take control in the event of a problem.

How does the Mercedes autonomous driving system work?

Unlike Tesla’s Autopilot or FSD which only relies on cameras, Mercedes’ system uses a series of sensors that enable driver assistance features and also includes LiDAR sensors, cameras and a humidity sensor in the wheel arch. There are also safety devices for the steering, braking and electrical systems. For its part, Tesla has always refused to use LiDAR sensors, calling them “expensive” and “unnecessary”.

« With this step we once again prove our pioneering work in the field of automated driving and we also initiate a radical paradigm shift. Said Markus Schaefer, CTO at Daimler. Mercedes has therefore taken the lead over its competitors, and is already working on another innovation that could revolutionize the sector: a car that drives by thought.

For now, Germany is the first country where the DRIVE PILOT system will be authorized, but Mercedes-Benz also performs tests in the US and Chinese markets. It is not known if the German manufacturer also plans to deploy its system in France, but it will probably be necessary to wait again. several months or years before French law allows it. We can nevertheless hope that the bills will move forward quickly, since France recently authorized the circulation of the first autonomous vehicle in Toulouse.